It’s not every day you get to watch someone have the greatest moment of their life. At least not close up. But there was no doubt I was witnessing Kaitlyn’s.

The tall, red-haired Aussie had been dancing with reckless abandon to Jon Bon Jovi’s pool deck set aboard the Norwegian Pearl. And when it came time for a fan to join him on stage to sing one of his biggest hits, she was the obvious choice.

Kaitlyn reacted like she’d been proposed to and chosen as the next contestant on The Price is Right all at the same time. She hurried through the crowd, leapt onstage, and stepped up to the microphone in a state of teary, euphoric disbelief.

After a brief introduction, Kaitlin and Bon Jovi belted out a pretty solid duet of “It’s My Life,” any traces of nerves completely gone from her performance. She was smiling and energetic and clearly living a moment she’d replay for the rest of her life. Seeing that kind of unbridled joy almost made me well up, and I might have had I not been watching the whole thing from a jacuzzi 20 yards away.

These are the sort of moments one finds on a theme cruise, watching a super fan get to live their ultimate dream while sipping on a cold drink in a hot tub. Though I may not have been a Bon Jovi aficionado myself, the energy, feeling of community, and unique experiences aboard the Runaway to Paradise with Jon Bon Jovi cruise made it feel like a dream vacation anyway. And as the number and variety of theme cruises increase every year, going on one is now just a matter of finding an interest that suits you. 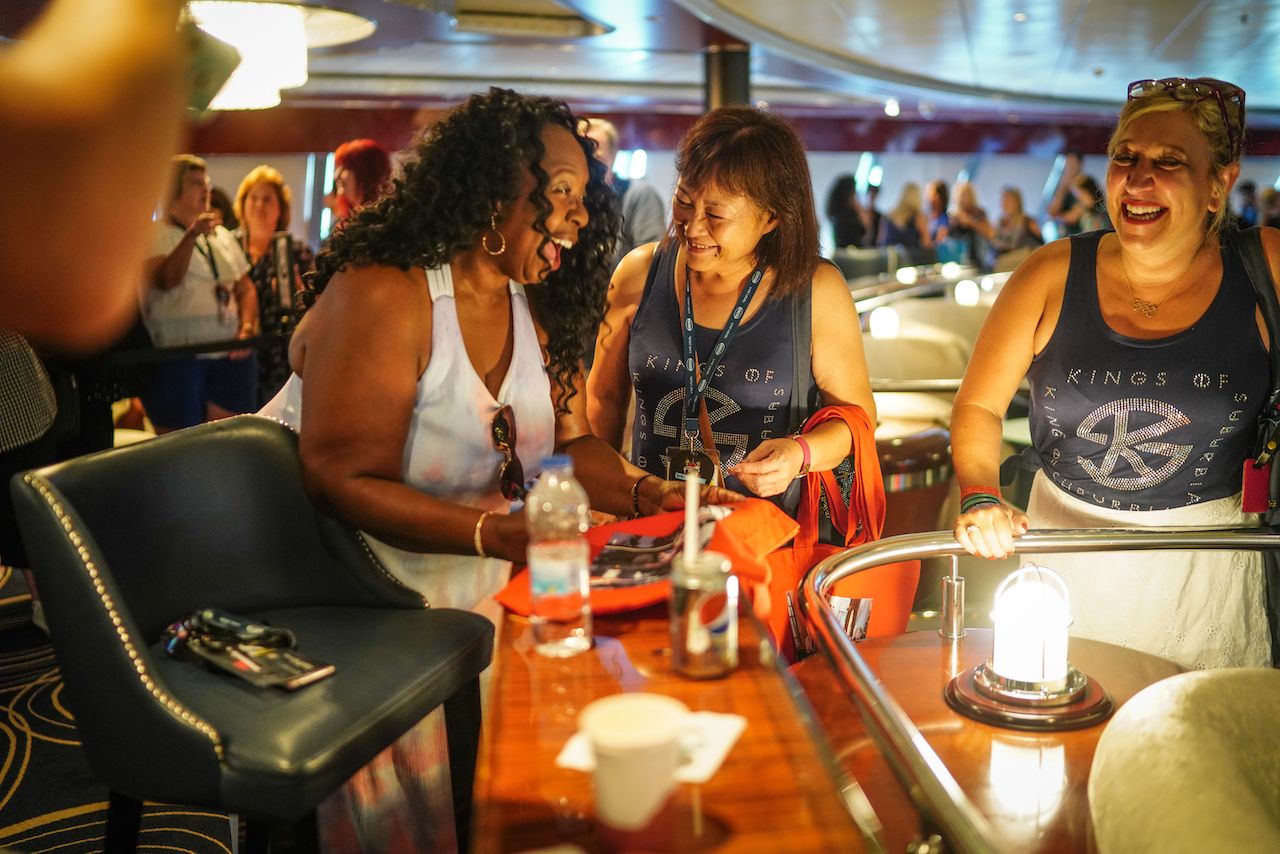 Though cruising has been around for decades, cruises centered around a specific theme or interest only date back about 18 years. The first of any size was a collection of about 400 Sister Hazel fans who took over part of a ship in 2001. That then morphed into Rock the Boat — the first large-scale music festival at sea — which inspired other genre-specific music cruises, artist cruises, and other entertainment acts.

Today you can find a theme cruise for almost anything you’re into, from swingers cruises to crossword puzzle cruises to Golden Girls cruises. And all those cruises are filled with people who are into the exact same stuff you are.

“When you get here you immediately realize you share a passion with a few thousand other people,” says Antony Diaz, the CEO of Sixthman, the largest producer of theme cruises who chartered 18 of them in 2019. He began his career in a band with two guys who went on to form Sister Hazel. “So when you’re at the bar or you’re having dinner, the conversations and the bonds form so quickly, because you both love the reason why you’re here. You might come for the artist, but you come back for the friendships.”

“I guess it’s like a Comic-Con kinda thing,” Goo Goo Dolls lead singer Johnny Rzeznik told me from his suite aboard the Pearl. He was onboard doing a couple of solo sets as part of the 10-band lineup during Runaway. “You’re stuck on a boat with all these people and y’all sort of have one or two things in common, and you just get to like sort of hang with your people. I think it’s a good way for people to make connections.”

Theme cruises have more to do, and you’ll get closer than you ever have to big names. 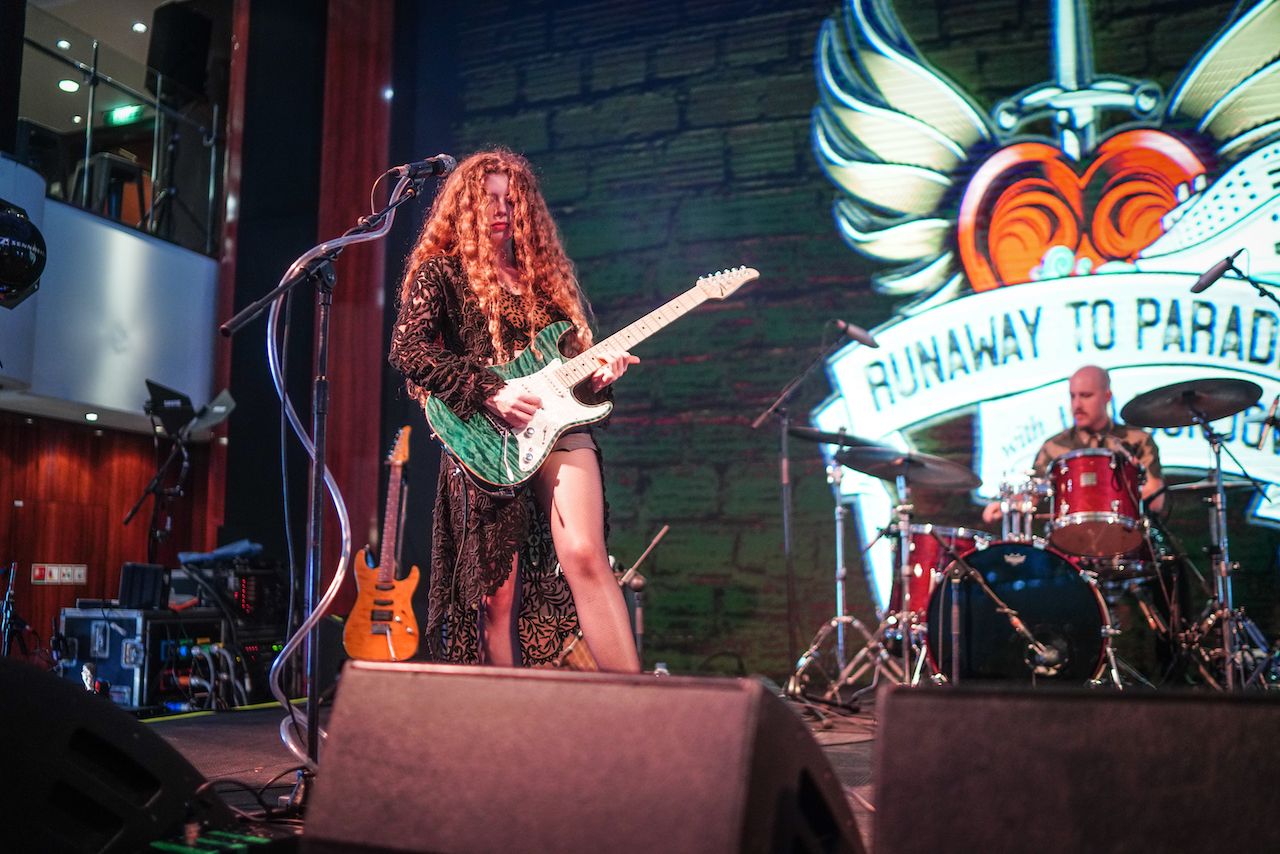 Not that cruise ships in 2019 are limited to the classic trifecta of eating, drinking, and trivia, but sometimes the shows or activities may not be things you’re necessarily into. On theme cruises, literally everything tailors to your interest.

On the Bon Jovi cruise, for example, 10 other bands were onboard, meaning you could find live music at almost any time of day. There was an ‘80s theme night. One day featured a live band karaoke where guests could sing Bon Jovi songs along with his touring band, The Kings of Suburbia.

Non-music-driven cruises have educational panels and workshops. Sixthman’s Walking Dead cruise has both Q&As and meet and greets with cast members. The New York Times Atlantic Crossing — for crossword puzzle enthusiasts — even had opportunities for you to work on puzzles with NYT puzzle editors.

But the main draw is still the chance to get close to your favorite celebrities.

Later in his pool deck set, Jon Bon Jovi ventured into the pit in front of the stage, where throngs of enamored fans gave him high fives as he wailed out “Born to Be My Baby.” He was doing it all on a small, nondescript cruise ship pool deck as the sun set behind him over Palma de Mallorca. It was exactly the kind of intimate, unusual setting where fans dream of seeing an icon like Bon Jovi.

“It’s a chance for fans to see bands in a totally unwieldy and tropical setting,” said country rock songstress Grace Potter, who was also on the Runaway bill. “I mean unwieldy because there have been days where rain has sloshed out the show, and so then you go inside and suddenly you’re watching one of your favorite musicians with nothing but an acoustic guitar.” 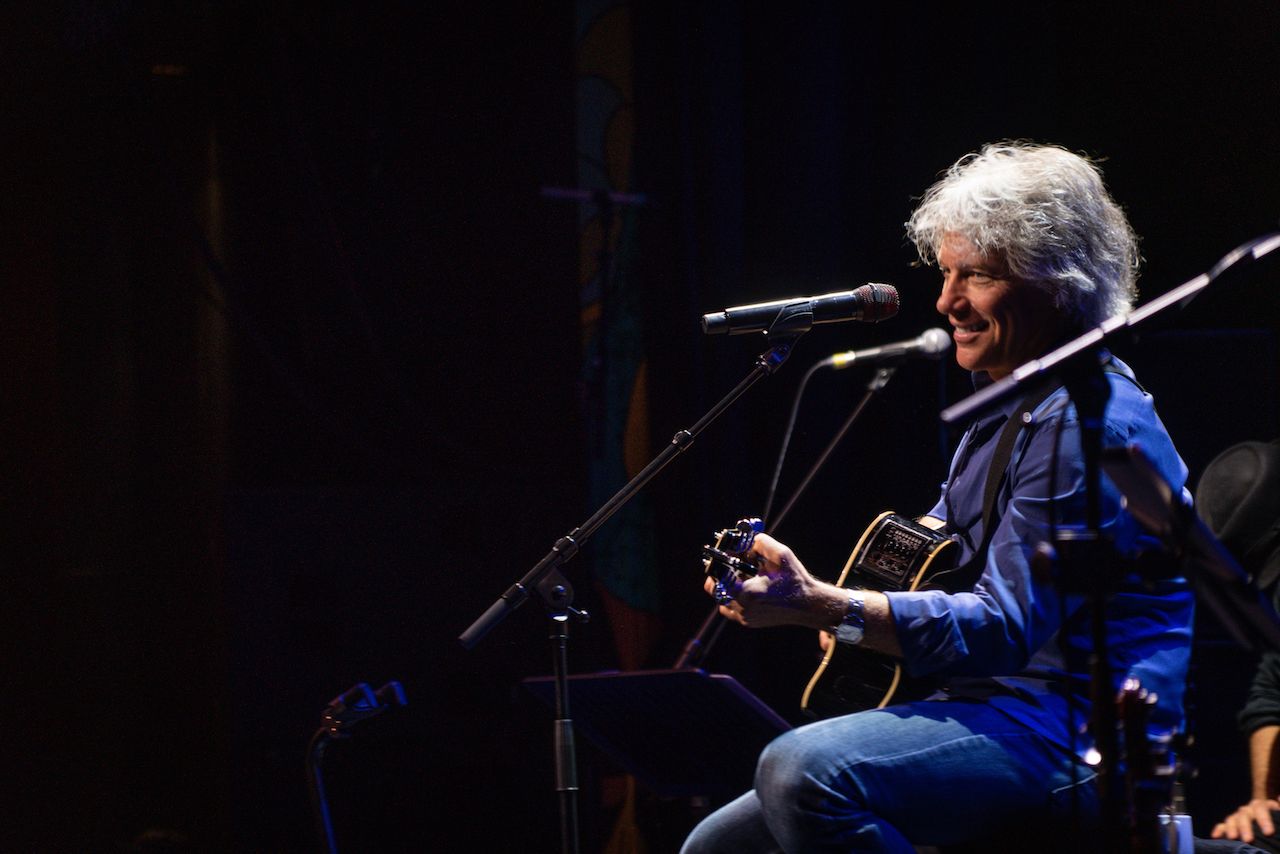 Such was the case on night two of the Runaway cruise, when Bon Jovi’s “Storytellers” set — where he was to perform some acoustic songs in between taking questions from the audience — was moved from the pool deck to the Pearl’s Starlight Theatre. During the performance, the superstar seemed relaxed and approachable, putting some different melodies and arrangements to hits most fans probably hadn’t heard before.

Though you’re not exactly hobnobbing with celebrities the whole time, you’ll still get to know performers better than you would otherwise. One afternoon I found myself on a lounge chair chatting with Tommy Meares, a trombone player in Kings of Suburbia. He told me how he got to know Bon Jovi by sneaking him into Asbury Park clubs in the early ‘80s.

“I sell home theater systems now,” he told me. “I still have a day job.”

Artists aren’t bothered much on the cruise either. Rzeznik said he’d been able to go to the gym every day and that most fans didn’t want much more than a hello. Potter said passengers recognized the live band karaoke performers more often than they recognized her.

“People ask me, what’s the KISS Kruise like? Do they all run to bother Gene Simmons?” Diaz says of Sixthman’s most-famous themed cruise. “They don’t even ask him for an autograph. But they will go up to him and say, ‘Gene, in 1982 when you played Wembley and you used a six-string bass instead of a five-string bass, why did you do that on that song?’ And Gene actually wants to have that conversation.”

Theme cruises are now a “legitimate” gig for rock stars.

Theme cruises look to be growing not just because guests like them but because artists do too.

“At first, it was sort of like, ‘What, you’re playing on a cruise ship? What are you, like, retiring?” said Rzeznik, who first played a cruise ship with Matchbox 20 in 2013. “But it’s become like a really cool, legitimate way that people like to spend their vacation, you know?”

Part of the motivation is also financial, too. When I asked Rzeznik why he wanted to do another cruise, his immediate response was, “I got paid. I got paid really well.”

“I think artists are realizing they’re not making the same as they used to make on physical music,” Diaz says. “They have to tour a lot now to drive their revenue streams and to make connections with fans. So I think they’re going to want to continue to do touring in a new way.” 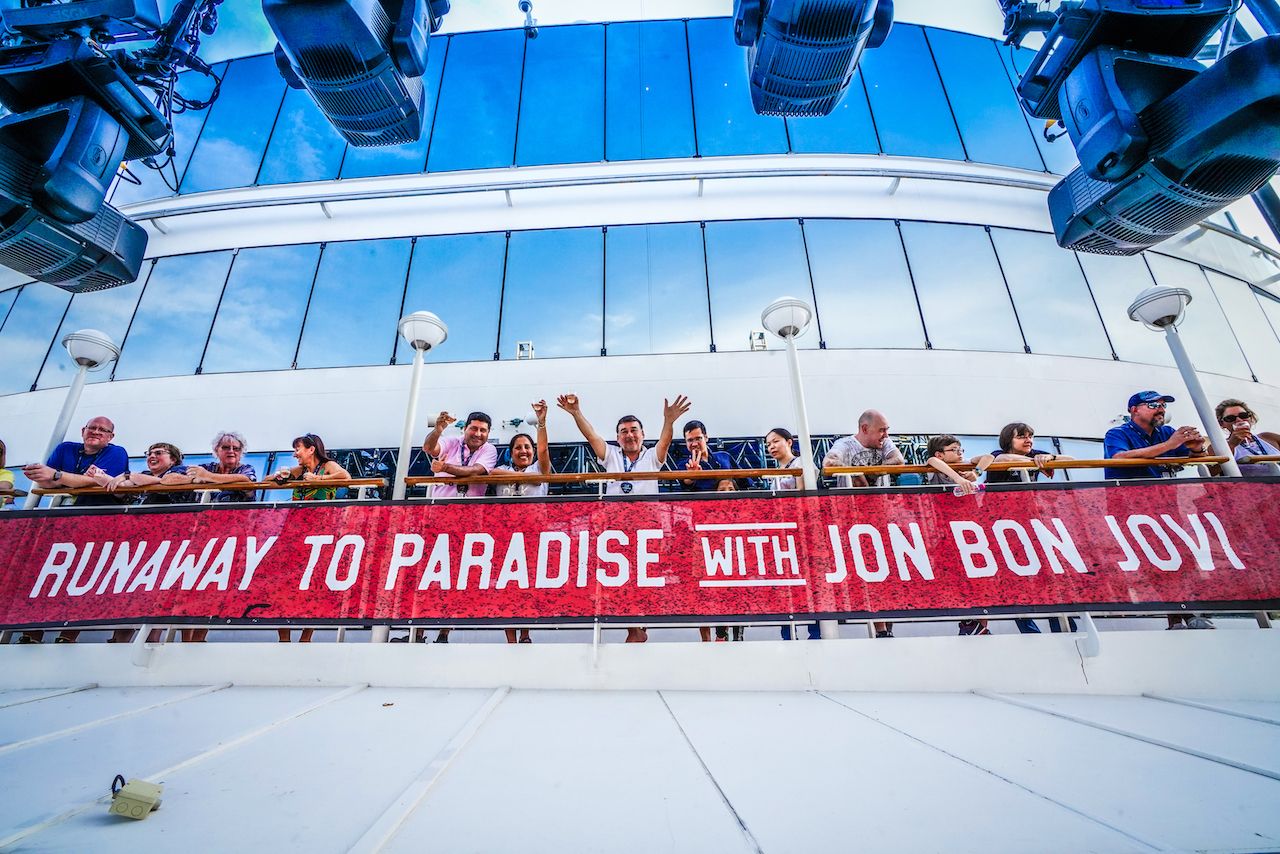 The concept isn’t just drawing older fans of classic bands like Bon Jovi and KISS. Diaz says among his most profitable cruises have been with Pitbull and Kesha, since that demographic is far more likely to cram five people into a cruise cabin.

Kaitlyn, for what it’s worth, fell into that younger demographic. Though I never found out her age, she looked like she’d been born well after Young Gun II hit theaters. Regardless, she exhibited the same kind of excitement you might see from an eight-year-old the first time she met Mickey Mouse when she got offstage.

“Highlight of your year, wasn’t it?” I said coyly from the hot tub.

“Year?” she said. “That’s going to be the highlight of my LIFE!”

CruisesWhy a Small Cruise Ship Is the Perfect Solo Getaway
Tagged
Celebrities Cruises Entertainment Music + Nightlife
What did you think of this story?
Meh
Good
Awesome