As soon as he smelled the cigarette, Miguel was not having it.

“Hey!” he yelled at a doughy man walking up the rocky path to the top of Curaçao’s Mount Christoffel. “Put that out! The hell you doing?”

The man with the lit cigarette looked up like he was about to get mugged. Miguel, our hiking guide, stood uphill from him, his large, dark frame a menacing sight form below. The man nervously extinguished his cigarette on the closest rock.

“Don’t throw that on the ground either,” Miguel added. The man nodded and threw his cigarette butt in his half-empty water bottle.

“That idiot’s out of water now,” Miguel said to us. “People don’t think. How you gonna mess this up by lighting up a cigarette? And you’re climbing a mountain! How do you even breathe?”

Miguel had been calm and funny to this point, a middle-aged lifelong Curaçaoan who had climbed Christoffel, Curaçao’s highest point, 122 times. He spoke of God often and his family almost nonstop. But somehow the cigarette made him snap into a sweaty, shirtless Smokey the Bear in a headband. 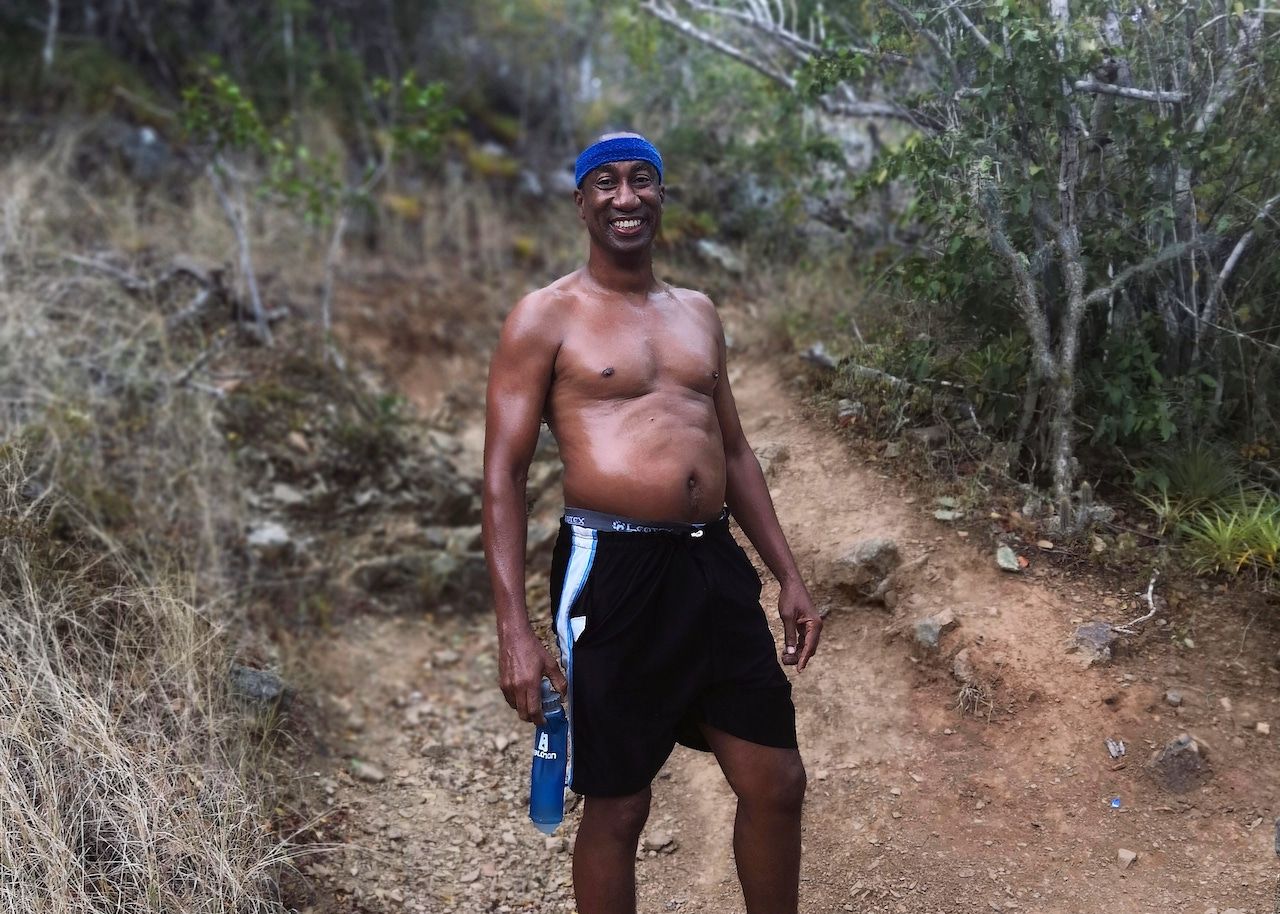 “We take our nature seriously,” Miguel said as we reached the top, where bright yellow and green hills led to the deep blue Caribbean. “It’s a big part of our lives.”

Throughout this Dutch Caribbean island, you’ll find people like Miguel, whose personalities shine almost as brightly as the glimmering water around them. They, along with its mountains, coral reefs, and tropical animals, make Curaçao the most colorful place in the world’s brightest region. 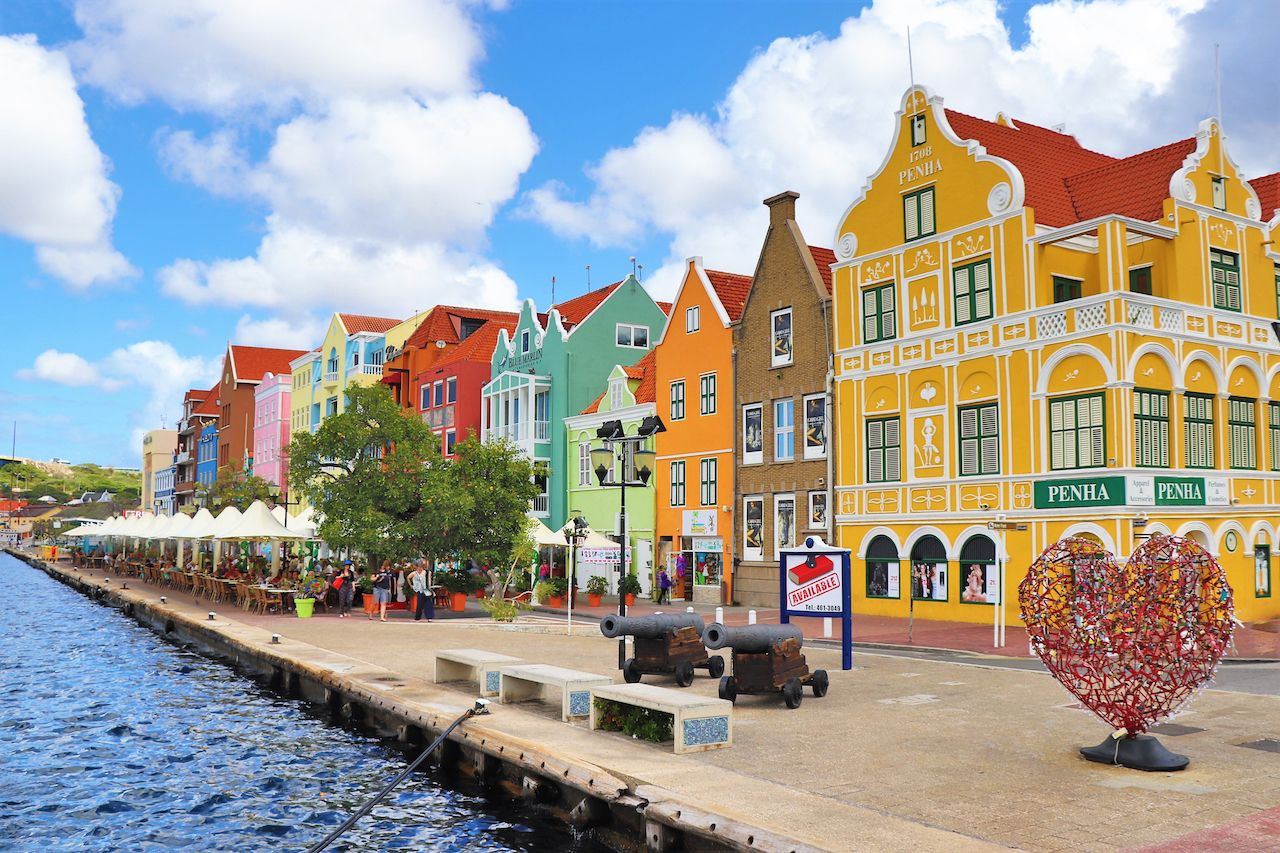 A pastel downtown that mirrors the reefs below

“The Caribbean’s brightest island” seems like an obvious superlative when strolling through Willemstad, the capital city of this special Dutch municipality. The UNESCO World Heritage site looks more like a toy city, with narrow, pitched-roof buildings in bright colors straight out of the opening of Mister Rogers’ Neighborhood.

The colors extend into the landscape, with glowing turquoise waters and bright green mountains framing the sorbet shop of architecture below. Colors also thrive below the surface, where one of the healthiest reefs in the world is vigilantly protected by Curaçao’s people. 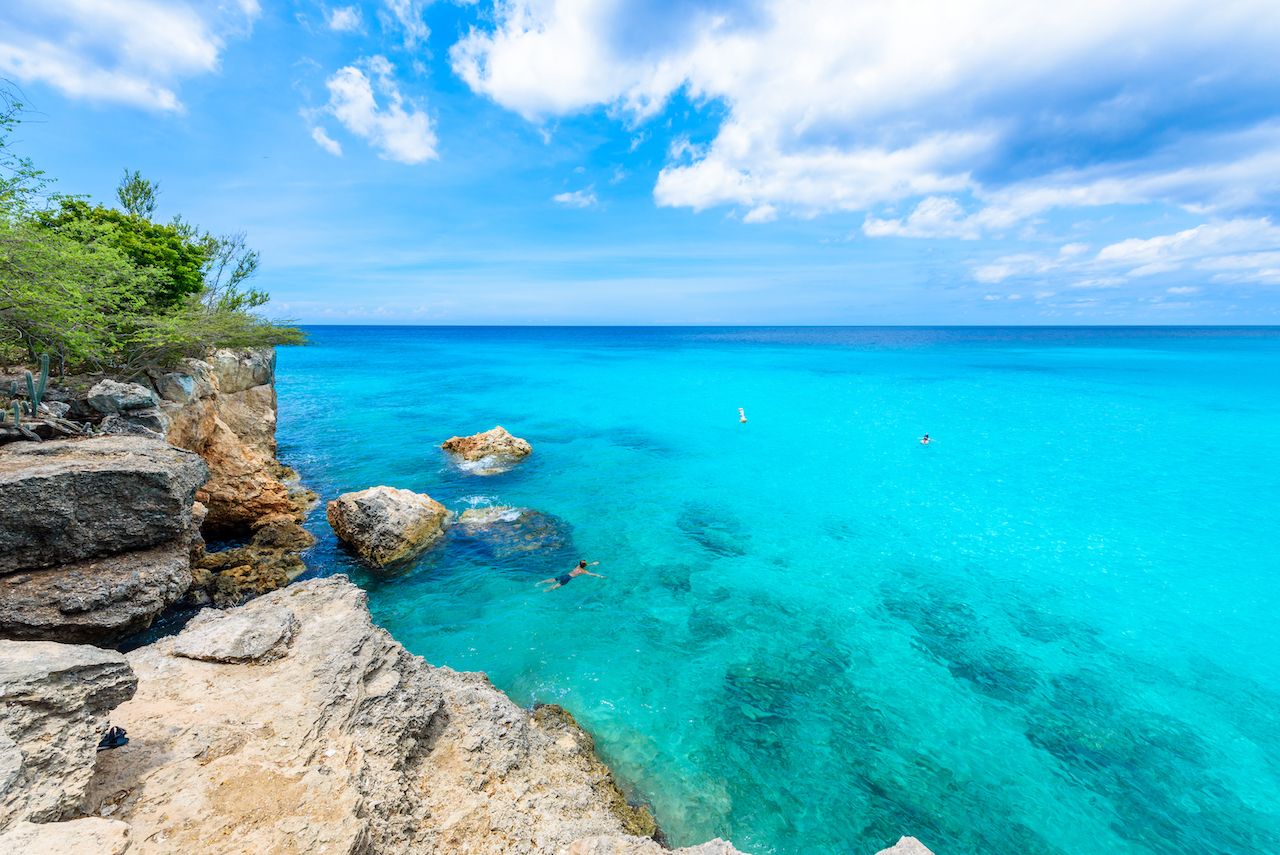 While trolling out from the Santa Barbara Beach Resort to Eastpoint, said by many to be the richest dive site on the island, a man in a rickety red fishing boat sped up next to us. He was wildly pointing and gesturing, yelling unprintable things in Papiamento. I had no idea what he was screaming, but I’m sure it was unprintable.

“This guy a pirate?” the Midwestern sales manager sharing the dive boat with me asked our guide. He seemed about as concerned with this potential “pirate” as he would with the animatronic ones on a Disney ride.

“Fisherman,” the guide said. “Thinks we snapped his line when we drove by. Maybe we did, but he’s not supposed to be fishing over here anyway.”

The captain gestured back equally as angrily at the man in the red boat, pointing emphatically at the water and shaking his head.

“Captain is telling him he’s not supposed to be out here,” the guide said. “The guy is saying how’s he supposed to make money with tourists out here diving. We all gotta share, you know?” 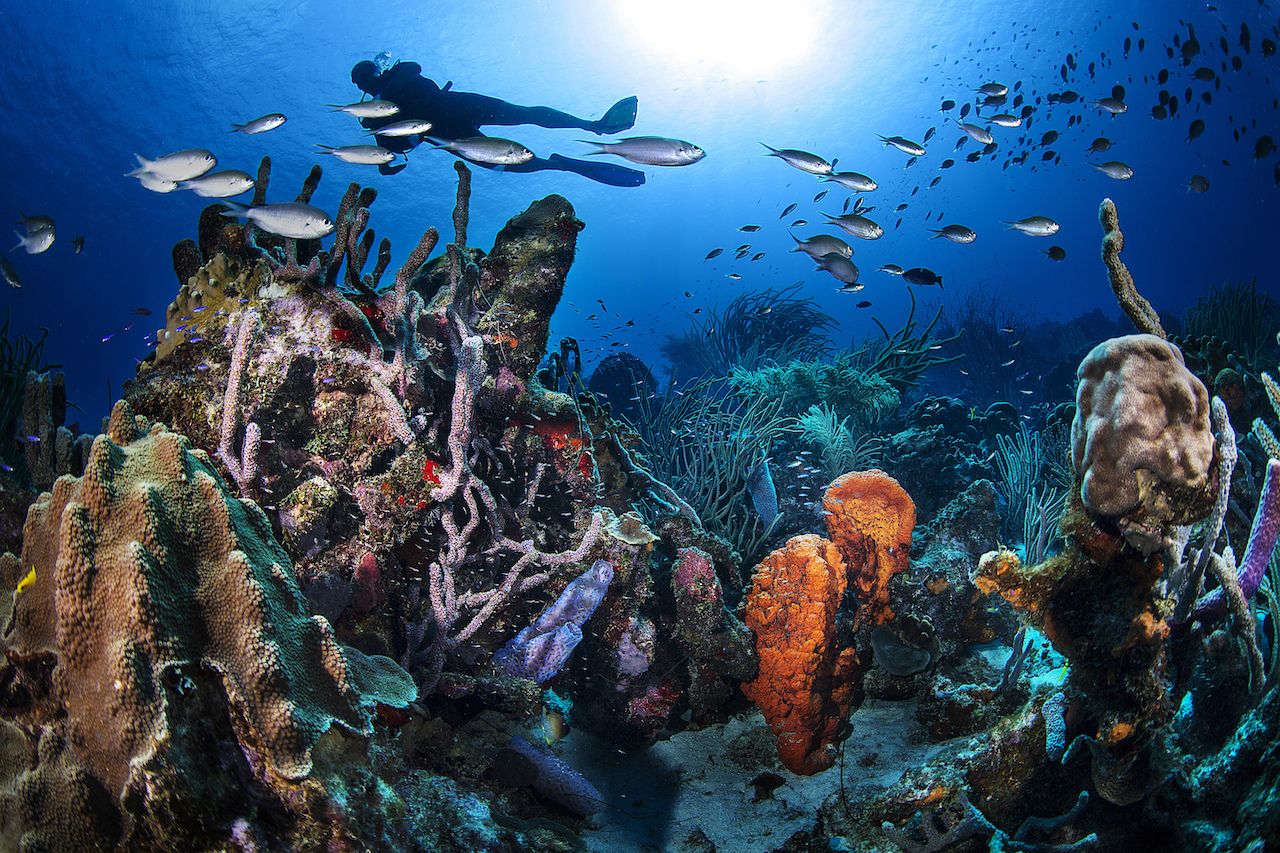 Underwater the reef’s colors made us immediately forget about the altercation on the surface. Curacao sits in a part of the Caribbean that almost never sees major storms, so the reef is among the world’s healthiest and most pristine. Bright purple and gold coral walls fed fish that shined electric blue and vibrant yellow. The reef seemed like an undersea embodiment of the skyline in Willemstad. Or rather, the skyline was paying tribute to the reef.

The resorts sit around nature, not on top of it

The reef sits just off the Santa Barbara Beach Resort, the best jumping-off point for Eastpoint on the southeastern coast of the island. To hear locals talk about it, it might as well be in Bora Bora. Though Curaçaoans love their nature, they don’t much care for traversing it. Mention going to this part of the island to a local and it’s like mentioning crossing a bridge to a New Yorker. 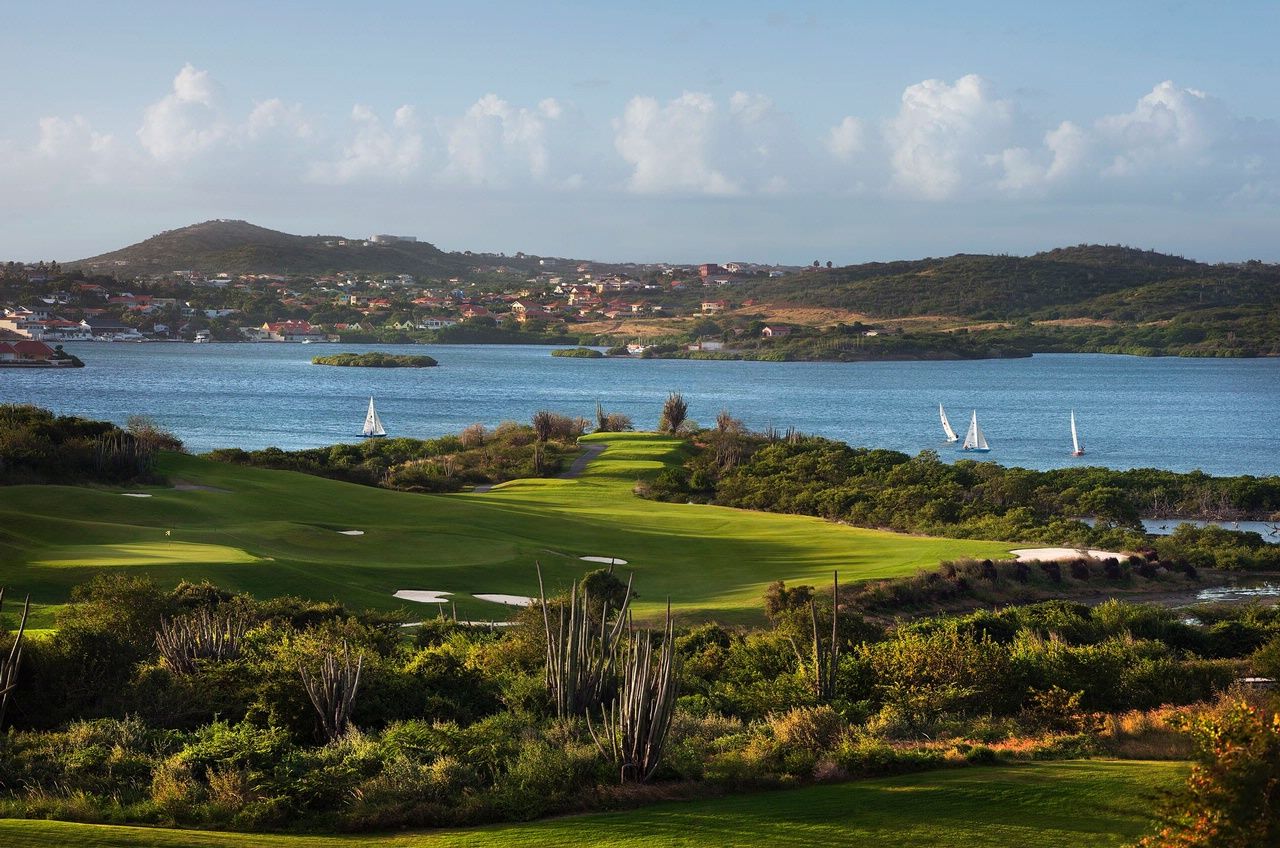 But that isolation is part of what makes this area so special, a sprawling 2,000-acre complex along the coast with an 18-hole golf course and Tafelberg mountain. Santa Barbara’s developers took care not to disturb the locals’ beloved wilderness, instead creating a place where you can spend the day taking in Curacao’s glorious colors by hiking the mountain or traversing it on ATV. It’s also why despite being gated, it’s generally praised by locals as a place that embodies the natural spirit of the island.

Dining and tropical dumpster diving are equally as colorful

Even meals in Curaçao are full of color. Not only in the bright red creole sauces and garnishes of tropical fruits, but in the restaurants that serve them.

The island’s most popular example is Jaanchie’s, which looks a little like your grandparents’ Caribbean vacation shrine and sounds like a bird-filled rave. But somehow, it works. Spartan tables and chairs fill a room of garage-sale paintings and maps of Curaçao, with wood toucan napkin holders on the tables and everything from globes to guitars on the wall. 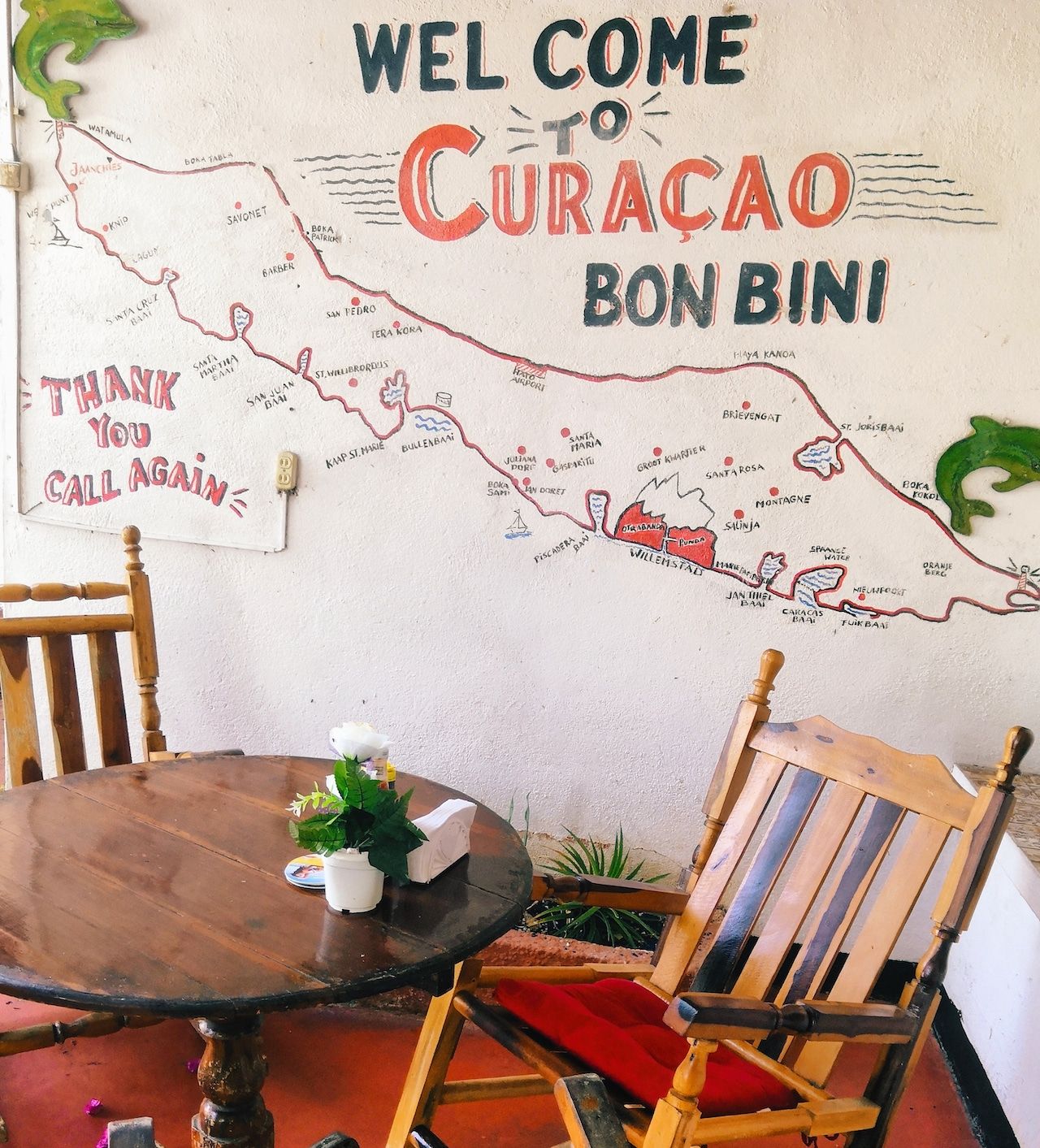 Tropical plants hang from the top of Jaanchie’s patio, where the staff fills little tins with sugar and places them out to feed the bright yellow bananaquits. Of course, the birds are all now feathered sugar junkies, chirping madly nonstop, like they’ve all just come up with the greatest idea in history and need to share it with everyone. If you’re a bananaquit, it’s probably like being at the worst after-hours house party in history, except the dealer keeps showing up.

Over the chorus of crack birds, a deeply tanned old man sat down at our table and began telling us about his menu.

“Let me tell you what we have today,” Jaanchie said under bright white hair. “Today’s special is a fish. I don’t know what kind of fish, but they catch it today. So it’s fresh fish.”

He ran through the entire menu, telling each person at the table what he thinks they should order, including “the best iguana you’ll ever have.”

I passed on trying iguana, but Jaanchie brought it out anyway.

“You don’t come to Curaçao and not try iguana,” he said, putting a bowl of meat chunks in a spicy-smelling, red-and-green gravy in front of me. It tasted, as Jaanchie had promised, exactly like chicken. 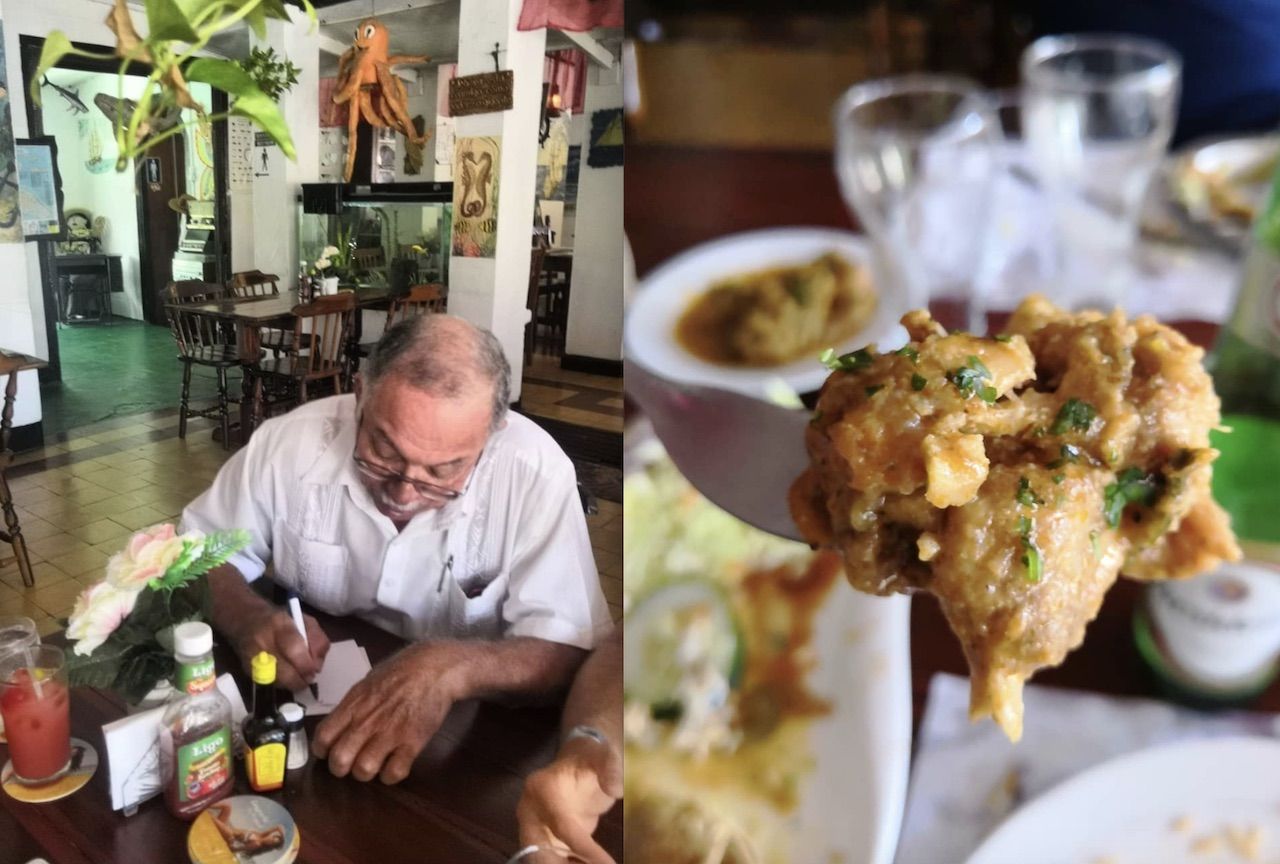 After lunch, we venture to Playa Piscado, one of the island’s most popular snorkeling spots, and also home to a daily fish market. Though “snorkeling behind a fish market” sounds a little like a tropical euphemism for dumpster diving, the fish scraps aren’t so much for humans as they are for the literal dozens of sea turtles who feed here every day.

The turtles draw snorkeling humans, who float atop the turquoise water, watching the green giants attack severed fish heads in the sea. It’s a little like watching a poorly edited version of Animal Planet where they didn’t bother cutting the frame enough to show the turtles were baited.

In addition to the screams of children and the perpetual crimson splash of fish by-products, you’ll also hear locals policing the tourists. 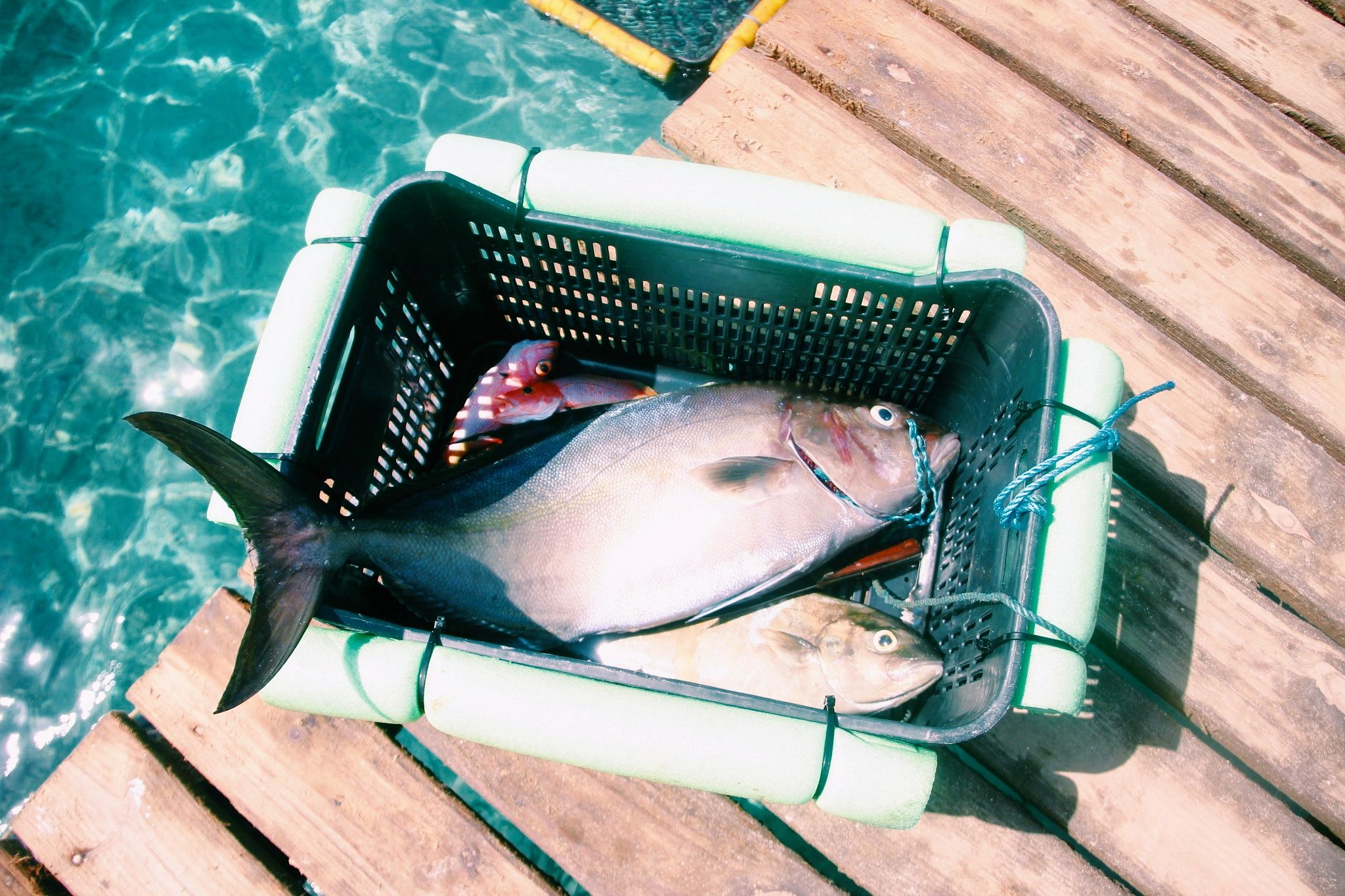 “HEY!” a woman standing on the pier yelled at a couple of Dutch middle schoolers. “What you doin’? Don’t touch them? They’re not for you!”

A blonde boy who’d been trying to pet a turtle popped up from the water, staring at the woman scolding him from the dock. A fish head grazed his face and plopped in the water.

“And watch out for the fish!” she admonished.

It’s not that the locals in Curaçao don’t like tourists, necessarily. They just don’t like them mucking up their nature. People on Curaçao aren’t afraid to tell you that, in a blunt, almost-humorous way that makes them as colorful as the birds, trees, and oceans they fight to protect. Curaçaoans understand the importance of preserving the delicate colors of their home, and use their strong personalities to get their points across. That’s why a trip here is so utterly memorable – the vividness of both Curaçao and its people linger long after you’ve left. And they work in harmony to ensure it’s just as vibrant when you return.

Hang Out With 3 Awesome Locals on Curacao