The proud inhabitants of Scotland have rich culinary traditions which, to the uninitiated, may initially appear overly preoccupied with the lining of sheep stomach and the various gastronomic utilities of blood. Admittedly, the names of the dishes don’t sound too promising either, but the Scots certainly do deliver on flavor. There’s a beguiling array of comfort foods to be discovered, perfect for gobbling up when curled in front of a fire, whisky in hand. These are the traditional Scottish foods you need to try.

Scottish foods to try on your next trip

1. Haggis with neeps and tatties 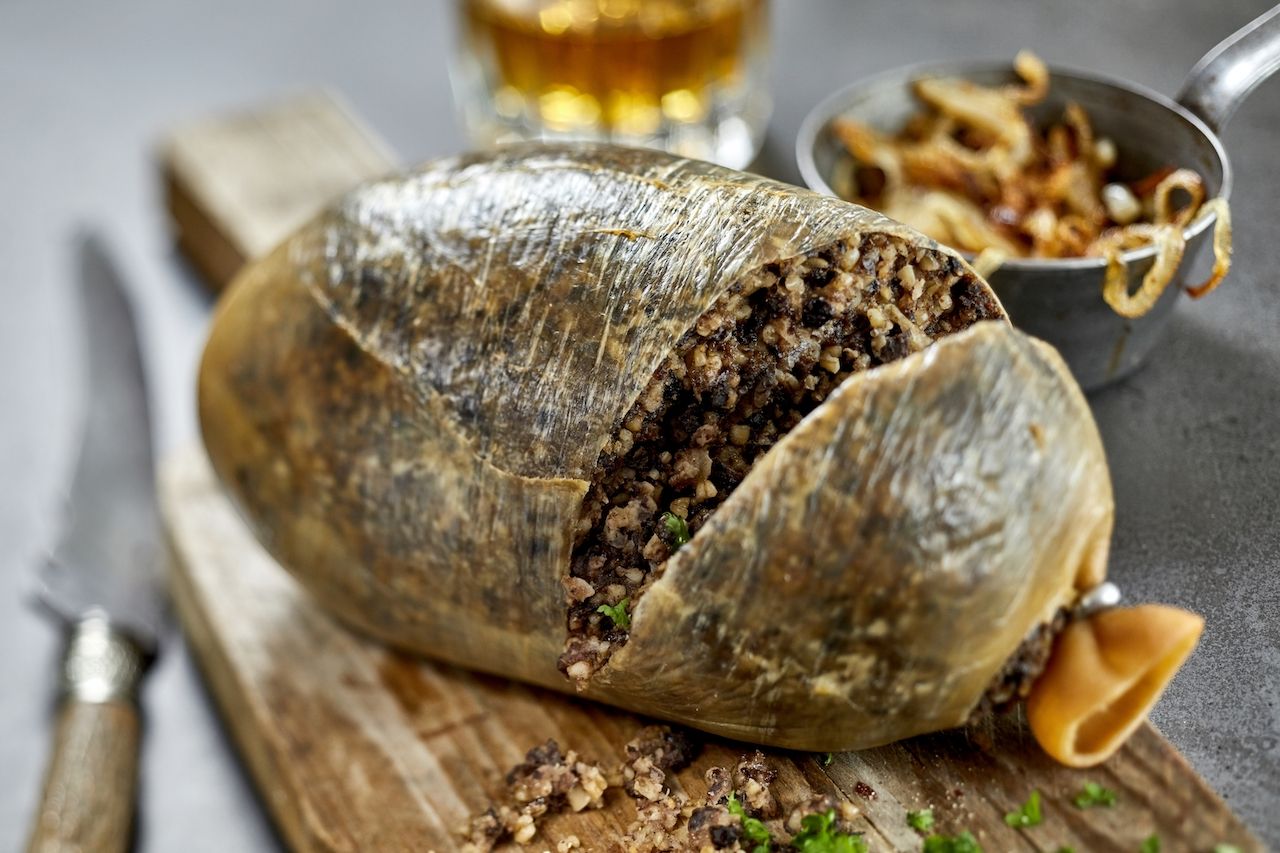 No dish is more Scottish, yet it’s challenging to describe haggis in a truly appetizing way. It’s made with all the bits of a sheep, combined with spices and oats, boiled in the sheep’s stomach (though today, artificial casing is often used) and served as a crumbly pudding. You’ll either love it or hate it. It’s usually served alongside mashed neeps and tatties, which is how you’ll find turnips and potatoes referred to on any good Scottish pub menu.

The dish is eaten with reckless abandon by Scots on Burns Night, a huge celebration of the life and poetry of Robert Burns (of “Auld Lang Syne” fame) who loved haggis, and wrote a poem about it. Arcade Haggis and Whisky House in Edinburgh comes highly recommended by locals for its take on haggis, neeps, and tatties. 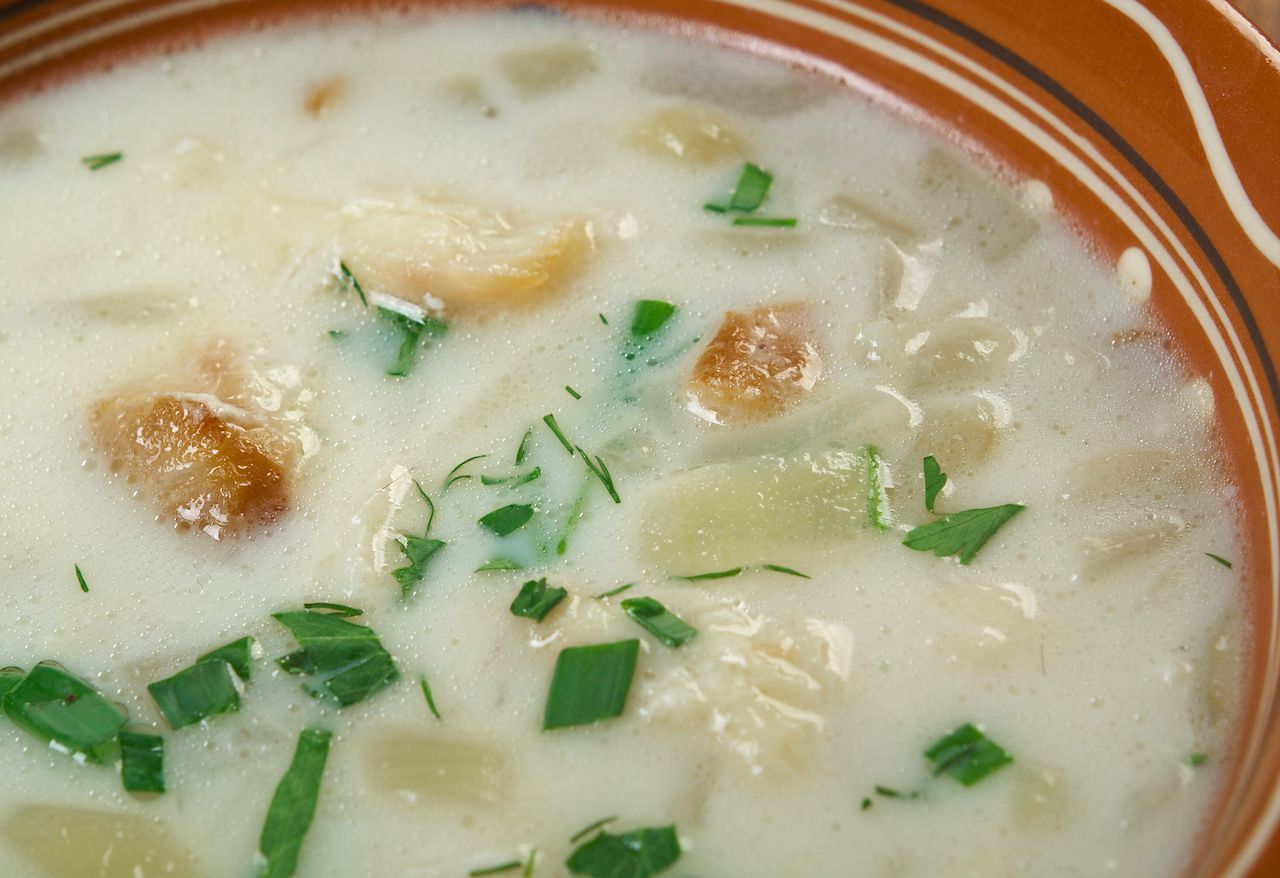 Quell any preposterous images that spring to mind after reading the name of this dish. Cullen skink is a smoky Scottish version of creamy fish chowder that’s traditionally made with smoked haddock and potatoes. This hearty soup originates from the small fishing town of Cullen on the northeast coast of Scotland. Fabulously, there is an annual Cullen Skink World Championship, which in 2018 proclaimed Lily’s Kitchen Cafe in Cullen itself to have the finest. 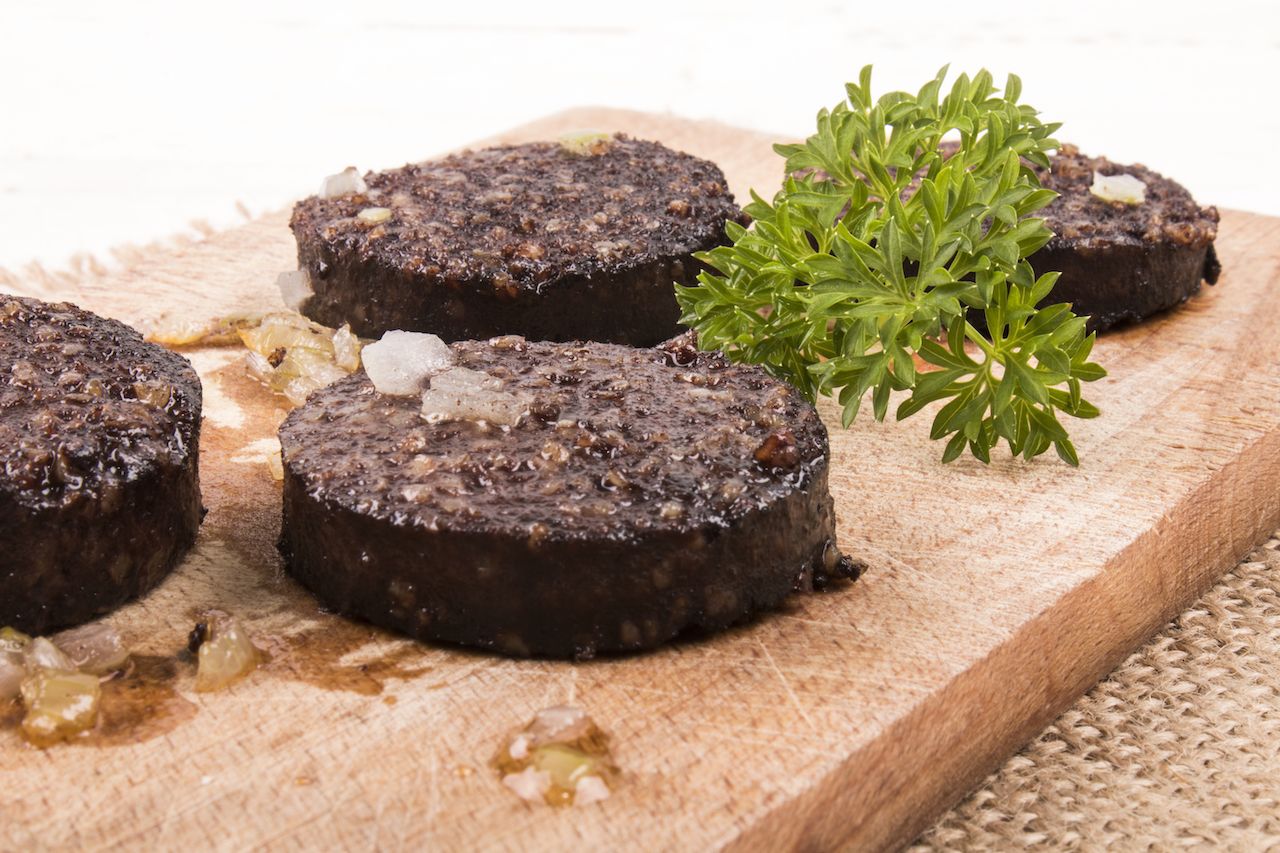 The production of black pudding in Scotland is a tradition hundreds of years old. Usually, it’s a mix of oatmeal, pig’s blood (but sometimes blood from a sheep or cow), suet (lard), onion, and spices. Although hotly contested, many Scots claim that the black pudding from Stornoway on the Isle of Lewis is the most delicious. Fortunately, Stornoway Black Pudding is immensely popular, so you won’t need to travel to the island to taste it. Any hotel will include black pudding in its traditional “fry up” breakfast, along with eggs, sausage, tomato, beans, and tattie scone. 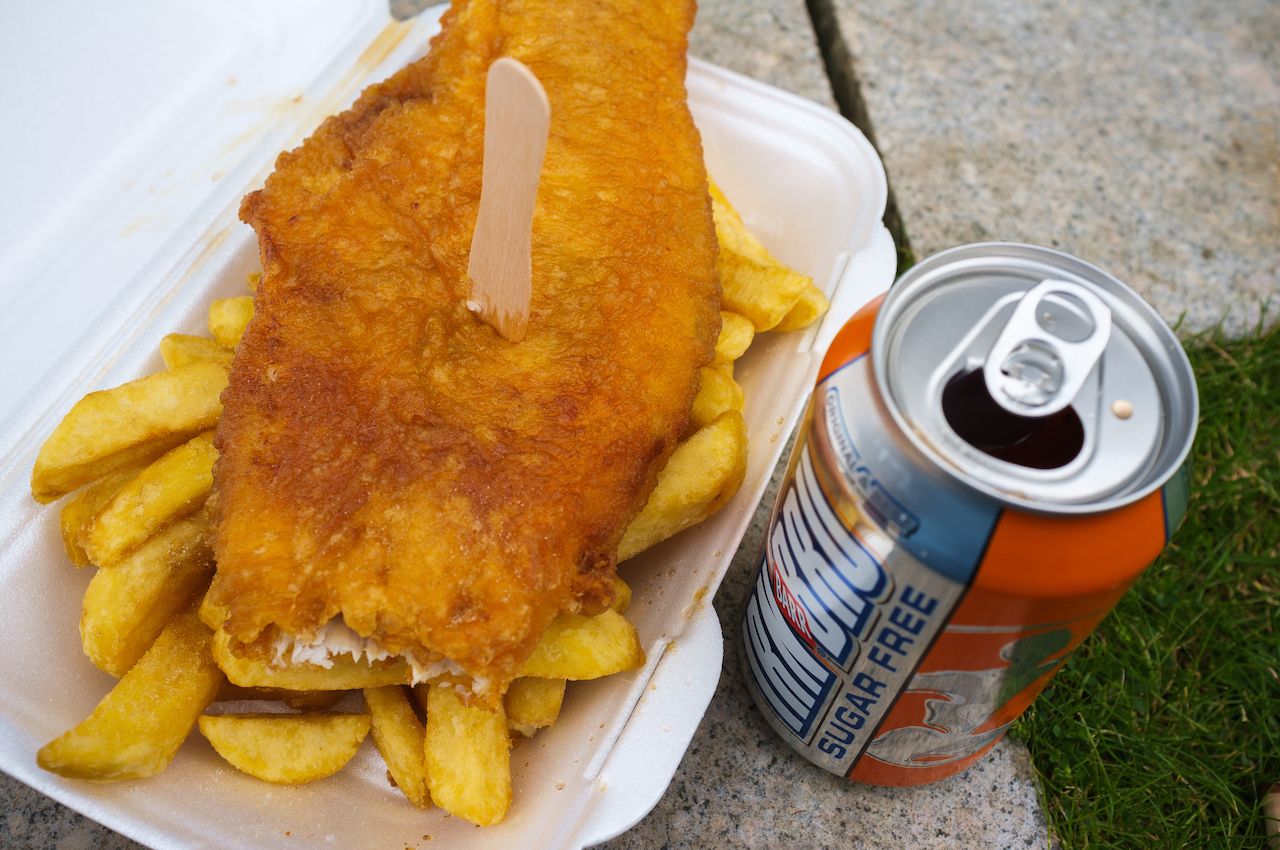 Get yersel doon the chippy fer a fish supper (that’s Scottish for “go down to the local takeout shop to get fish and chips for dinner”). This ultimate comfort meal involves fish (often haddock) battered and deep-fried until crispy and served alongside deep-fried, fat French fries. The fries are to be consumed with salt, but depending on where you are in Scotland, perhaps also with vinegar or sauce. This meal is best washed down with a can of sugary Irn Bru, a vivid orange Scottish soda. The Bay Fish and Chips in Stonehaven on the east coast of Scotland has received much acclaim for its fish supper. For the traditional, queue alongside the locals at Merchant Chippy in Glasgow. 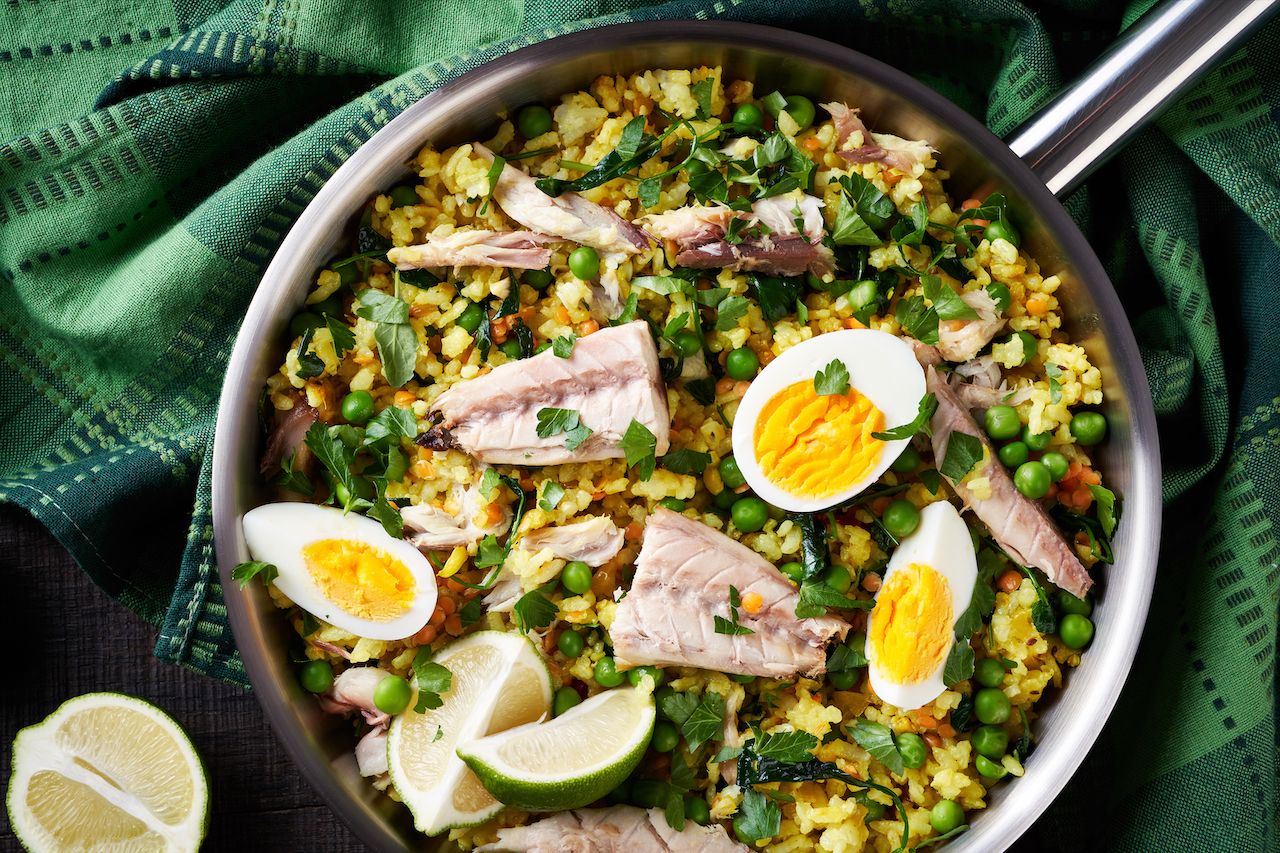 Traditionally eaten for breakfast, kedgeree is a spiced rice dish containing flaked fish (often smoked haddock), cream or butter, parsley, and hard-boiled egg. The Anglo-Indian dish is thought to have been popularized in Scotland in the Victorian era. Nowadays, perhaps because of its historical place on a rich Victorian breakfast spread, it tends to feature on the breakfast menus of upmarket hotels, such as The Balmoral in Edinburgh and Kinloch Lodge on the Isle of Skye. 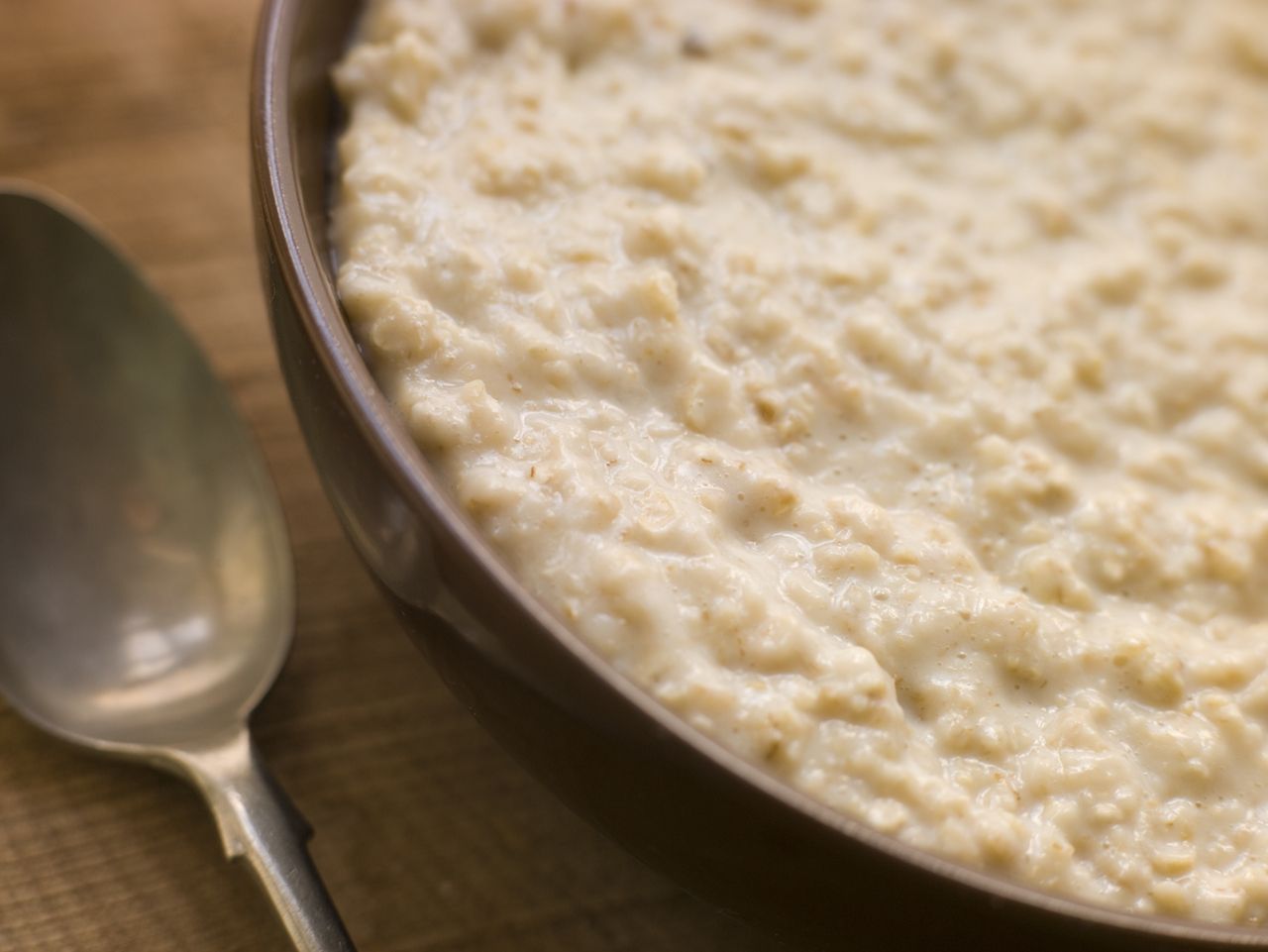 Oats have been a staple crop in Scotland for generations, and feature heavily in many traditional dishes. Porridge is one such classic example and can be found on just about any breakfast menu in Scotland. While it was historically made with just oats, water, and salt, you’ll now discover multiple sweet and savory adaptations. A decadent modern favorite includes the addition of cream, sugar, and the ubiquitous cheeky wee dram of whisky. So integral is this dish to Scottish culture that the local tourism board has created the Porridge Grand Tour so that everyone can taste the best on offer in their locality. 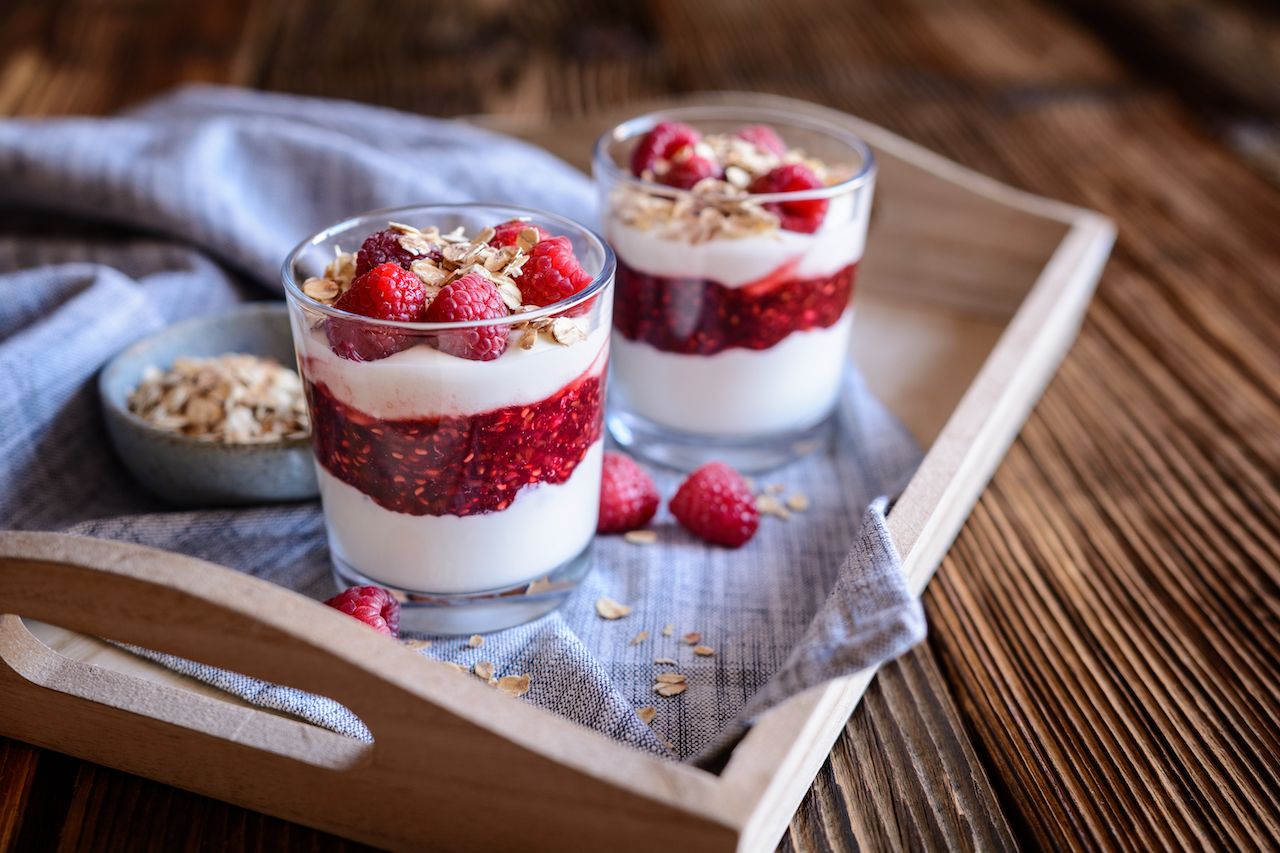 Oats make another appearance in this dessert concoction, delectably layered alongside raspberries, honey, cream, and, of course, whisky. Reminiscent of England’s Eton Mess or perhaps a berry trifle, this variation is undeniably Scottish food. Locals will tell you that Scottish raspberries are the best in the world when in season in June, which is, unsurprisingly, the best time to be eating cranachan. You’re likely to find it on many dessert menus, and Edinburgh’s Whiski Rooms is a great starting point. 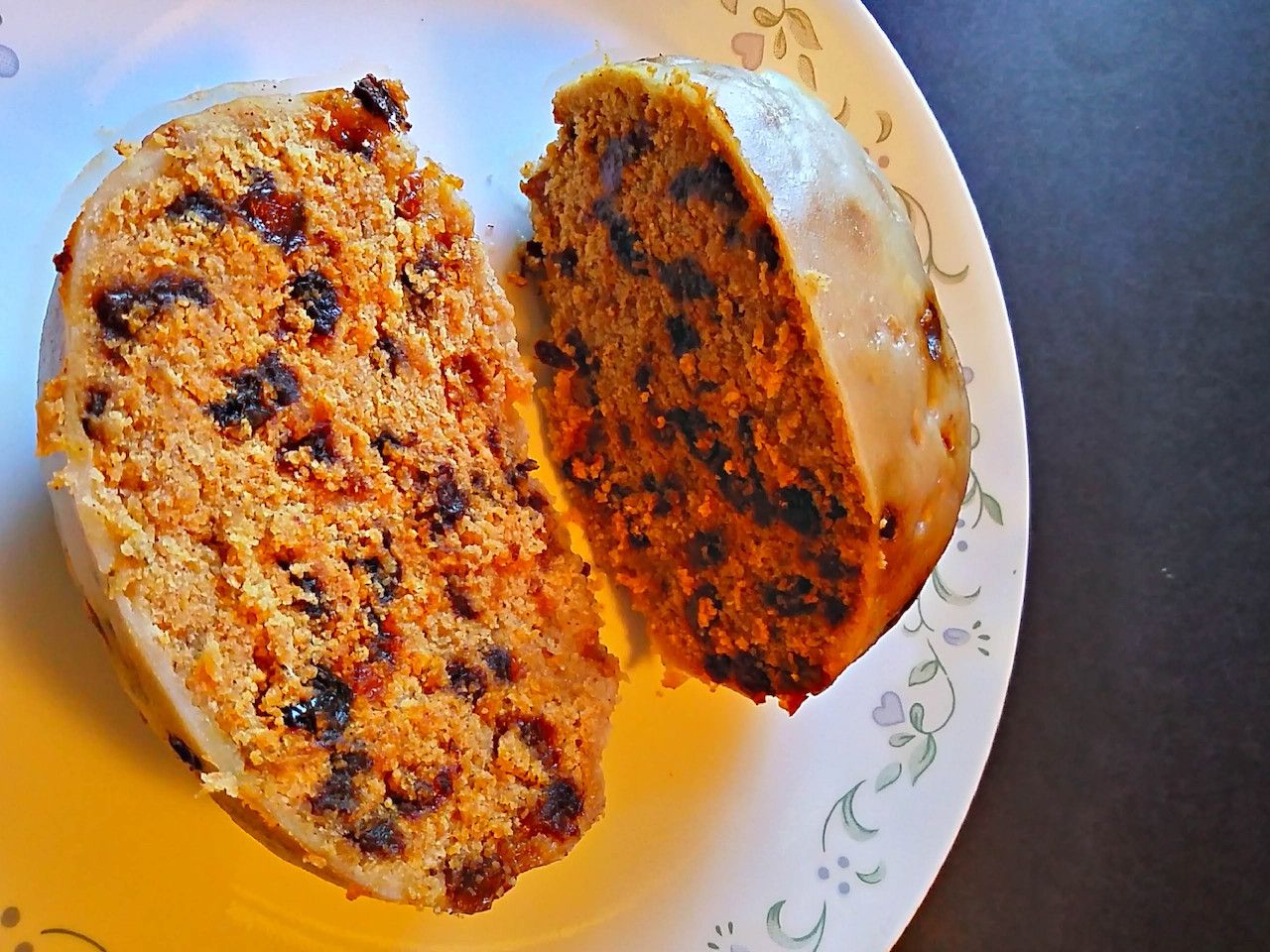 This dessert’s name is derived from the cooking method or boiling a dumpling inside a clootie, which is a piece of cloth or rag. Similar in taste to Christmas pudding, the clootie dumpling usually contains dried fruit, spices, and suet, and is served warm with a good dollop of custard or clotted cream. We highly recommend visiting Cairngorms National Park to work up an appetite by hiking or skiing, and then indulging in a slice of the Speyside Heather Centre’s famous clootie dumpling. 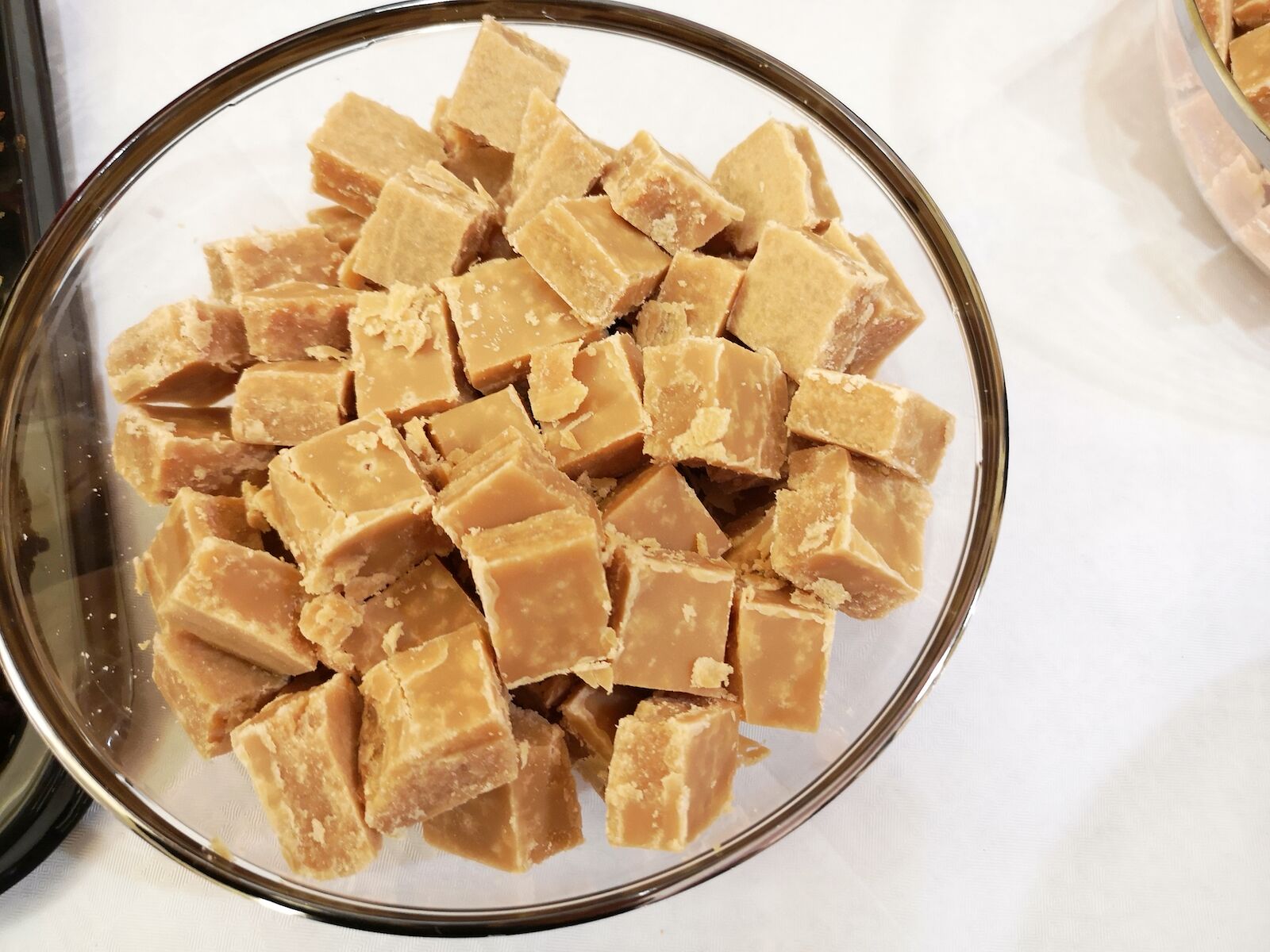 At first glance, you might be inclined to compare Scottish tablet to caramel or even fudge, but it has a few key differences: Made from sugar, butter, and condensed milk, tablet has a coarse texture. It’s semi-hard, meaning its not as soft as fudge, but it won’t crack your teeth like a piece of hard candy either. Despite its gritty mouth-feel, it supposedly melts in your mouth, but you might not want to eat too much: the super sugary flavor can get cloying after a while. 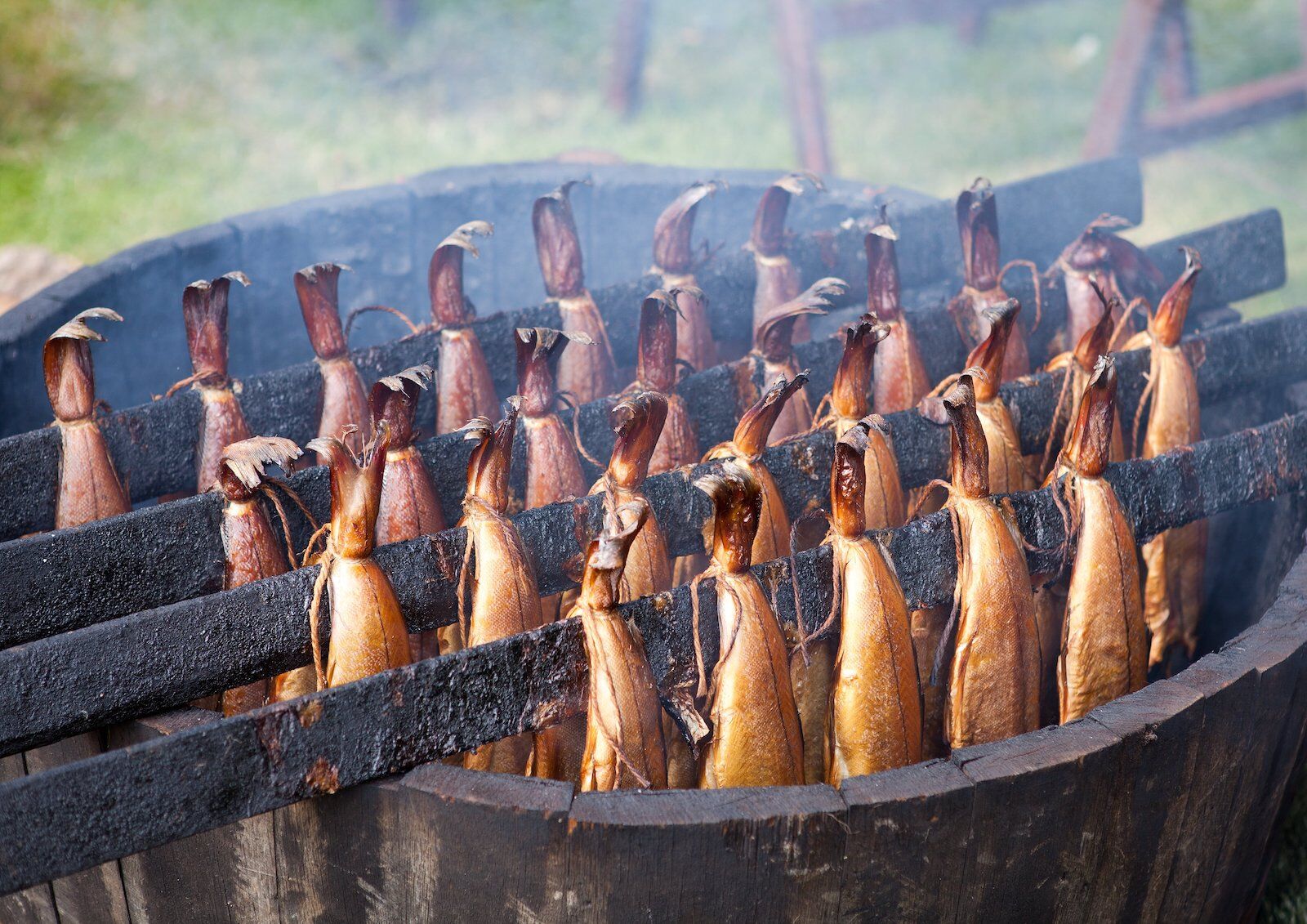 This type of smoked haddock is a speciality of the fishing town of Arbroath, in east Scotland. Prepared in a barrel over a hardwood fire, these smoked fish have Protected Geographical Indication, which means they can only earn the name if they are made within a five-mile radius of this town.

Considered a national delicacy, the flavor is legendary for its balance between savory and sweet — it’s also been described as salty, smokey, and even creamy. 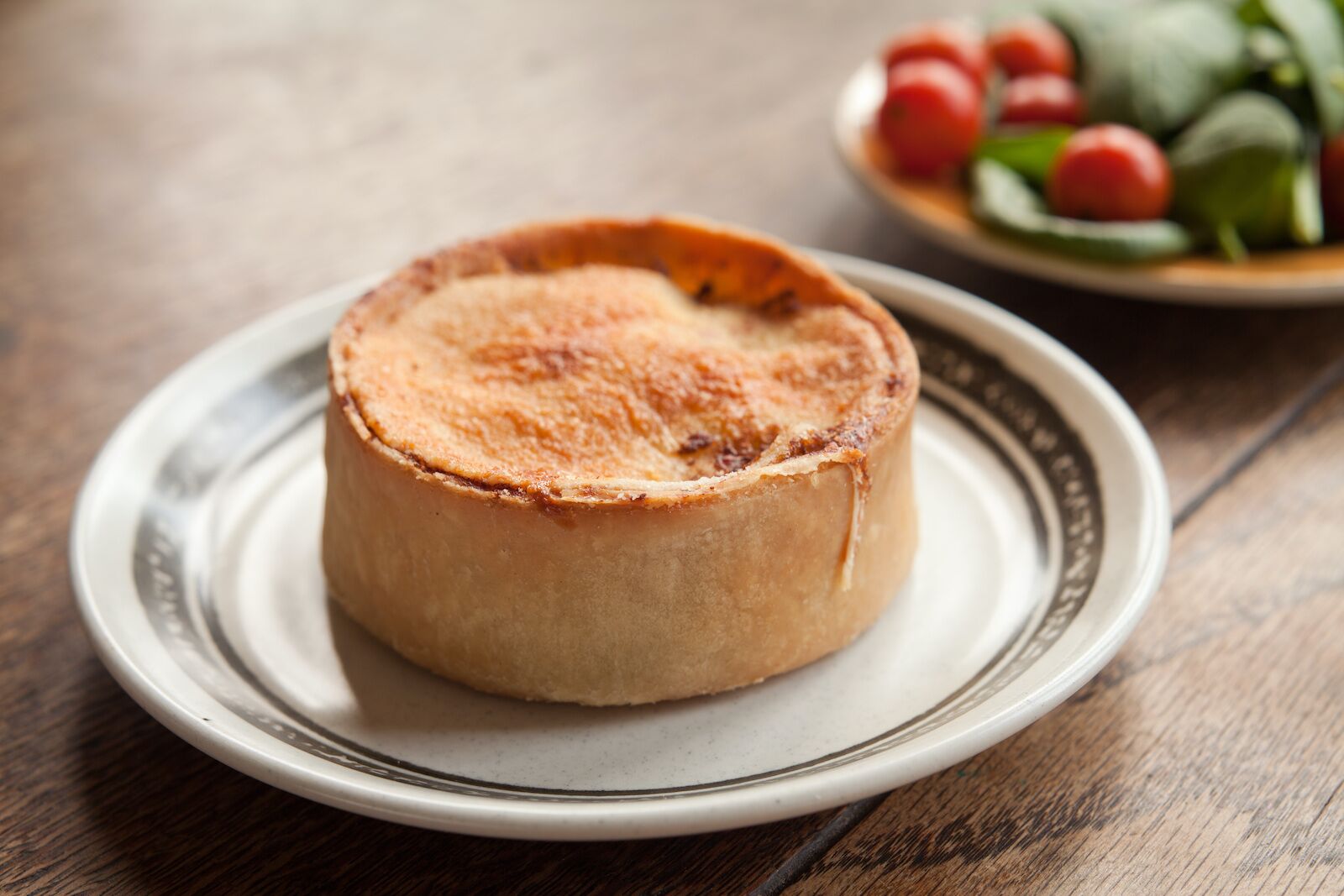 These small hand pies are made with hot water pastry — which is more like a hard crust than a flaky pie dough. It’s usually filled with mutton or other minced meat, or haggis. Sold in bakeries all over Scotland, Scotch pies are considered a type of fast food, easy to eat on-the-go and at football games, in particular. They have a long history in Scotland too, going back to the middle ages. Once considered a luxury, Scotch pies are now well known as a hearty snack for working people. 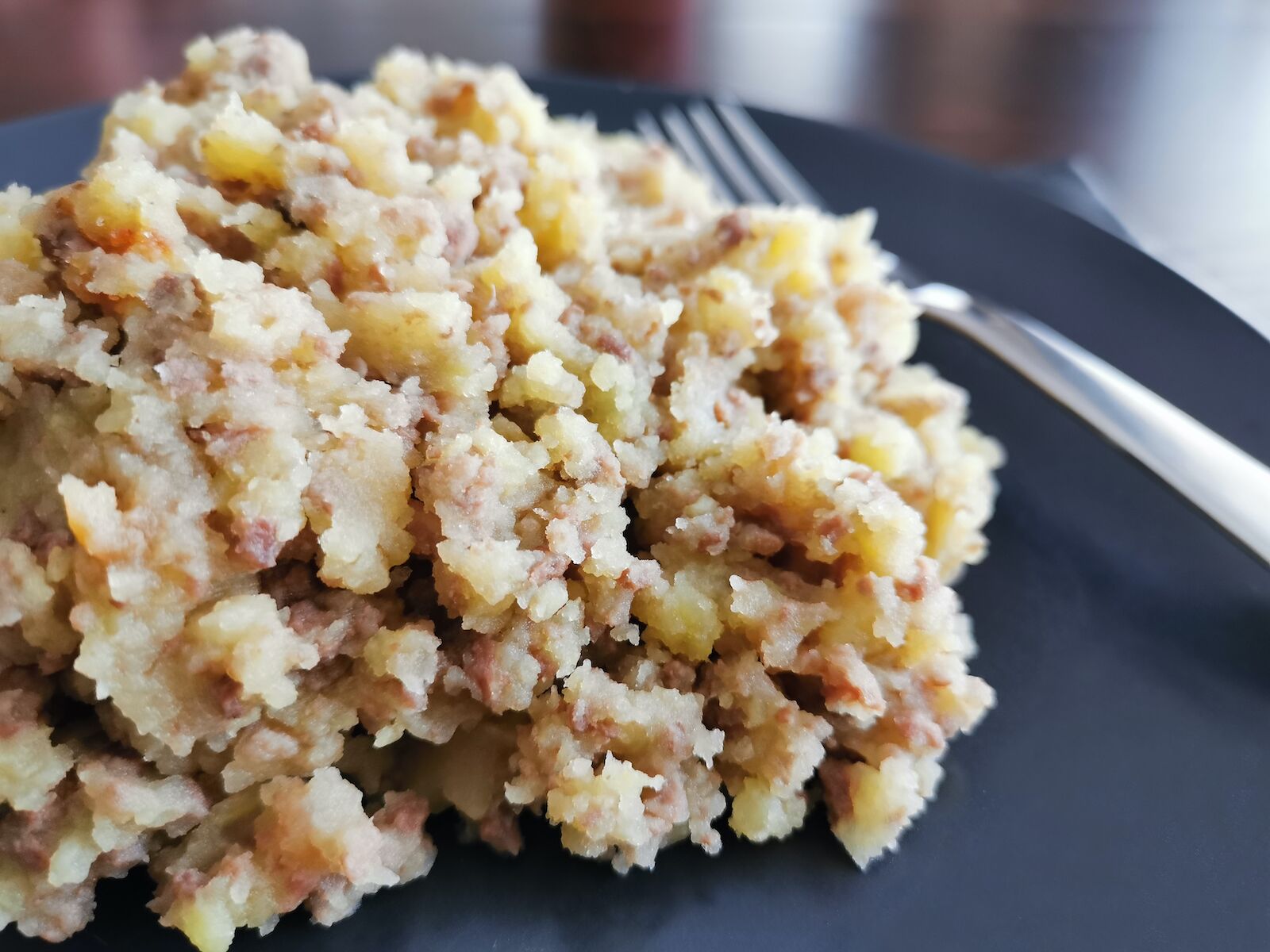 Sometimes considered a nostalgic comfort food, stovies are technically a simple dish of potaotes mixed with onions an leftover roasted meat, cooked in beef drippings. Stovies can also be made with corned beef or minced meat. Recipes vary from family to family however. In Scotland, to “stove” means to stew, so you might think of this dish as stewed potatoes. The dish sometimes served as a side or as a way to repurpose leftovers.

What food is Glasgow famous for?

Glasgow is famous for its fried foods, so you’ll find deep fried Mars bars and even deep fried pizza in this city. Glasgow is also famous for Tunnocks Tea Cakes, delightful bite size shortbread cookies topped with meringue and coated in in chocolate. Another snack to look out for in Glasgow is the so-called roll and square sausage, available on burger vans (the Scottish version of a food truck) throughout the city. It’s looks like a mini hamburger, with two buns sandwiching a square slice of sausage.

Incidentally, chicken tikka masala, a Westernized version of an Indian dish that has become legendary all over the world, was (probably) invented in Glasgow.

What is a traditional Scottish breakfast?

A traditional full Scottish breakfast is a piled high with mushrooms, baked beans, black pudding or haggis, scones or oat cakes, toast, a fried egg, and square patty of lorne sausage. It’s similar but not exactly the same as an English breakfast, which often includes bubble and squeak, otherwise known as potatoes and cabbage.

What is a Scottish appetizer?

A typical appetizer served in Scotland usually involves fish. You might come across smoked salmon or cured haddock (known as finnan haddie), or even artichokes stuffed with fish as an appetizer. Soups are another popular appetizer, both cock-a-leekie soup and cullen skink.

What are traditional Scottish sweets?

In addition to tablet and Tunnocks Tea Cakes, traditional Scottish sweets include shortbread, hard candies known as Soor Plooms, and another candy called Edinburgh rock, which has the texture and feel of chalk, but softer. Dundee cake is also incredibly popular in Scotland. Similar to fruit cake, its made not with cherries, but dates and candied fruit peel, and topped with almonds. Black bun is another version of fruit cake you’re likely to see in Scotland. Unlike dundee cake, black bun is covered in pastry crust, and contains raisins and currants.

Technology + GearEverything You Need To Backpack Through Europe
Tagged
Food + Drink Scotland
What did you think of this story?
Meh
Good
Awesome