Arkansas has seven certified national parks with two of the most well-known being Hot Springs National Park and the Buffalo National River. These preserved sites showcase some of the most impressive scenery in the Natural State, but they also attract crowds. If you’re interested in getting off the beaten track and exploring some of the smaller protected areas, Arkansas has 52 state parks with a wide variety of terrain and cultural experiences to choose from.

With free admission, Arkansas state parks have a great reputation for recreational opportunities, well-maintained facilities, and acres of green spaces. Ideal for families or outdoor enthusiasts, there’s something for everyone from digging for diamonds, to camping under the stars, to hiking to waterfalls and mountain biking through forests. Each of Arkansas’ state parks has something unique to offer, so we’ve rounded up some of our favorites to help you plan your next visit to the Natural State. 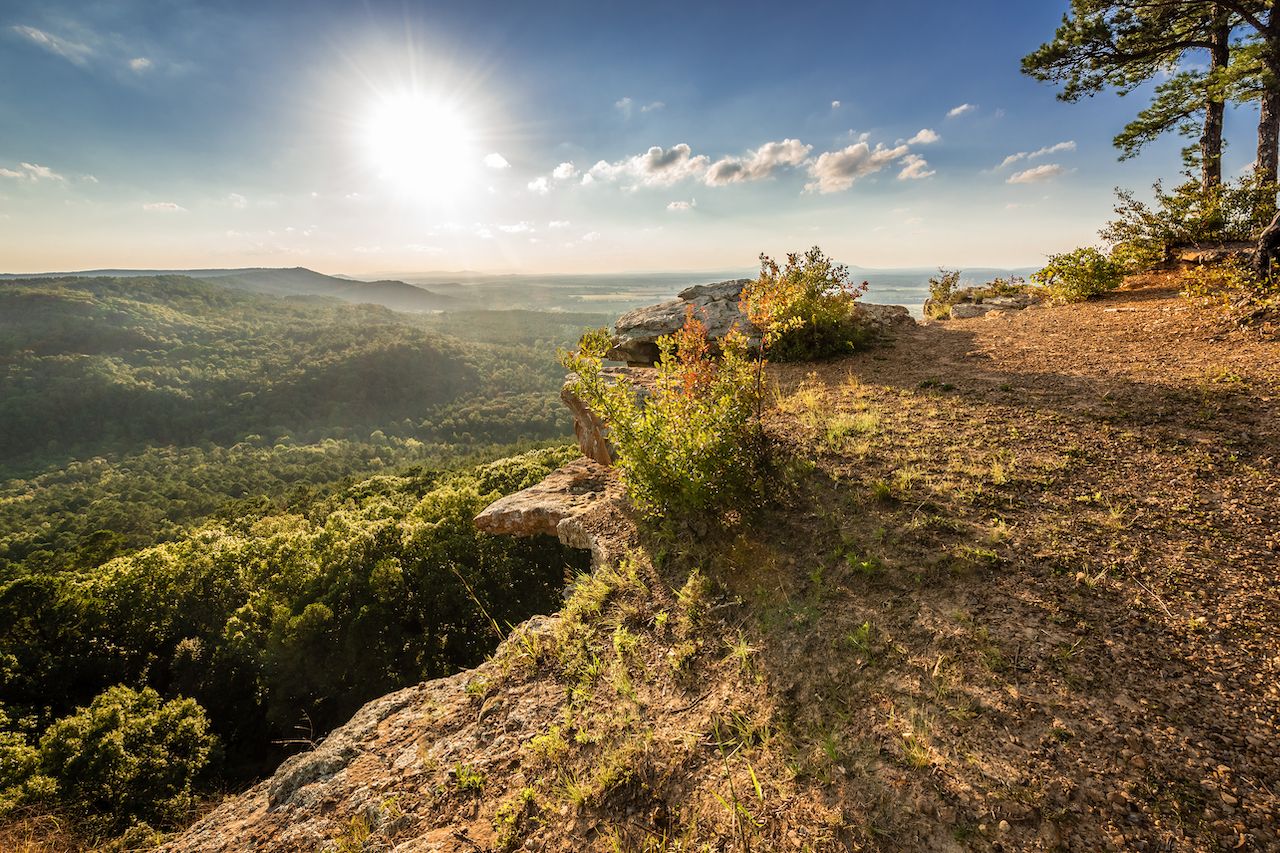 Early development of the park came from the Civilian Conservation Corp between 1933 and 1938. Petit Jean has three national Historic Districts with more than 80 buildings, structures, trails, and bridges, which are still in use. Today, the park offers modern and rustic accommodations, including 33 cabins, a 24-room lodge, and 125 campsites for tents and RVs. In addition to a full-service restaurant serving classic Southern cuisine, the park has many traditional amenities such as swimming pools, playgrounds, ball courts, and an amphitheater.

The view from the lodge and restaurant looks out over the stunning Cedar Creek Canyon below making it easy to understand how the land became the inspiration for the state parks system. 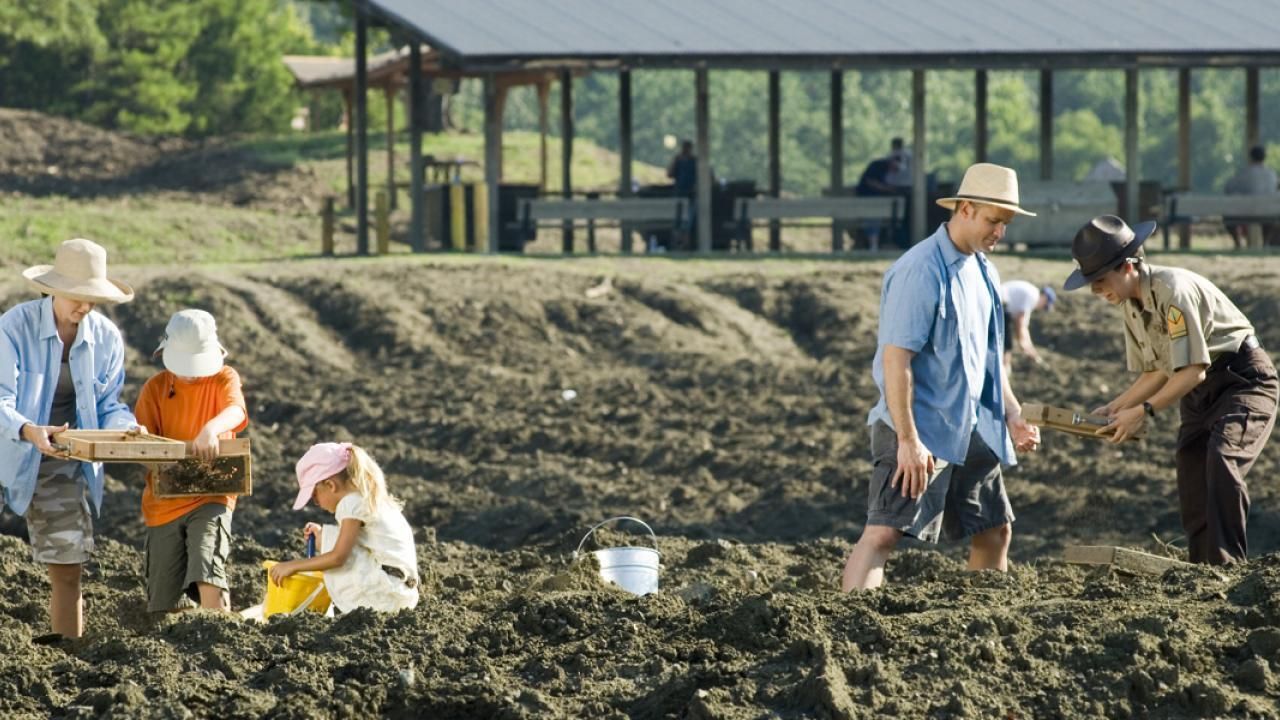 Just as its name implies, Crater of Diamonds State Park consists of the eroded surface of a volcanic crater that’s full of diamonds and other rocks and minerals such as amethyst, garnet, jasper, agate, and quartz.

Visitors can search the 37-acre plowed field and keep any treasure they find. Since the park opened in 1972, more than 33,100 diamonds have been discovered. One of the latest diamonds in the US, a 40.23-carat nicknamed Uncle Sam, was found in 1924. The Diamond Discovery Center is an educational station in the park where visitors can learn more about how to search and the history of the area’s unique geology.

The park also has campsites, a lunchtime cafe, and Diamond Springs Water Park which is perfect for cooling off after a day of digging. 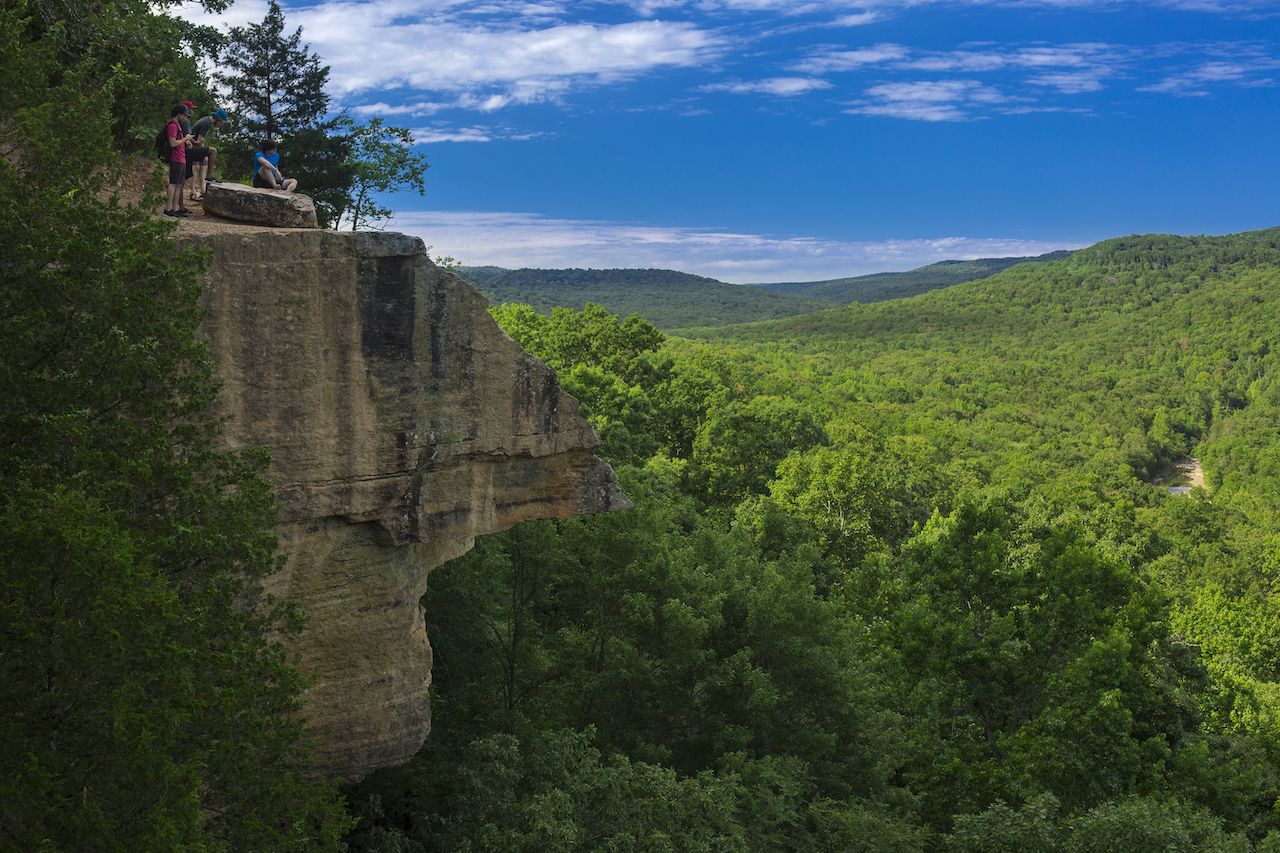 Devil’s Den State Park derives a great deal of its identity from the rustic style design of its historic cabins and its rugged and largely undeveloped terrain. Situated in the Boston Mountain subdivision of the Ozark Mountains, the parkland is on the southernmost highest and most severely eroded of the three plateaus that form the mountain system. Lee Creek, which runs through the park, has cut through layers of sandstone, shale, and limestone exposing these geographic features to view. The landscape can be seen in the third season of the critically acclaimed HBO crime drama True Detective, much of which was filmed in the park.

Within this rugged terrain, Devil’s Den has hiking, mountain biking, horseback riding, and backpacking trails that lead to caves, crevices, and bluff overlooks. Unfortunately, the caves in the vast sandstone crevice area are now closed to help stop the spread of white-nose syndrome in bats; yet, the caves still provide habitat for numerous species, including the endangered Ozark big-eared bat.

Developed in the 1930s, the park is one of the most intact Civilian Conservation Corps parks in the US. Native stone and wood are prevalent in all the CCC-made structures in the park, especially trails, cabins, and scenic overlooks. This Arkansas icon also has a lake for fishing and boating, 135 campsites, and a playground. 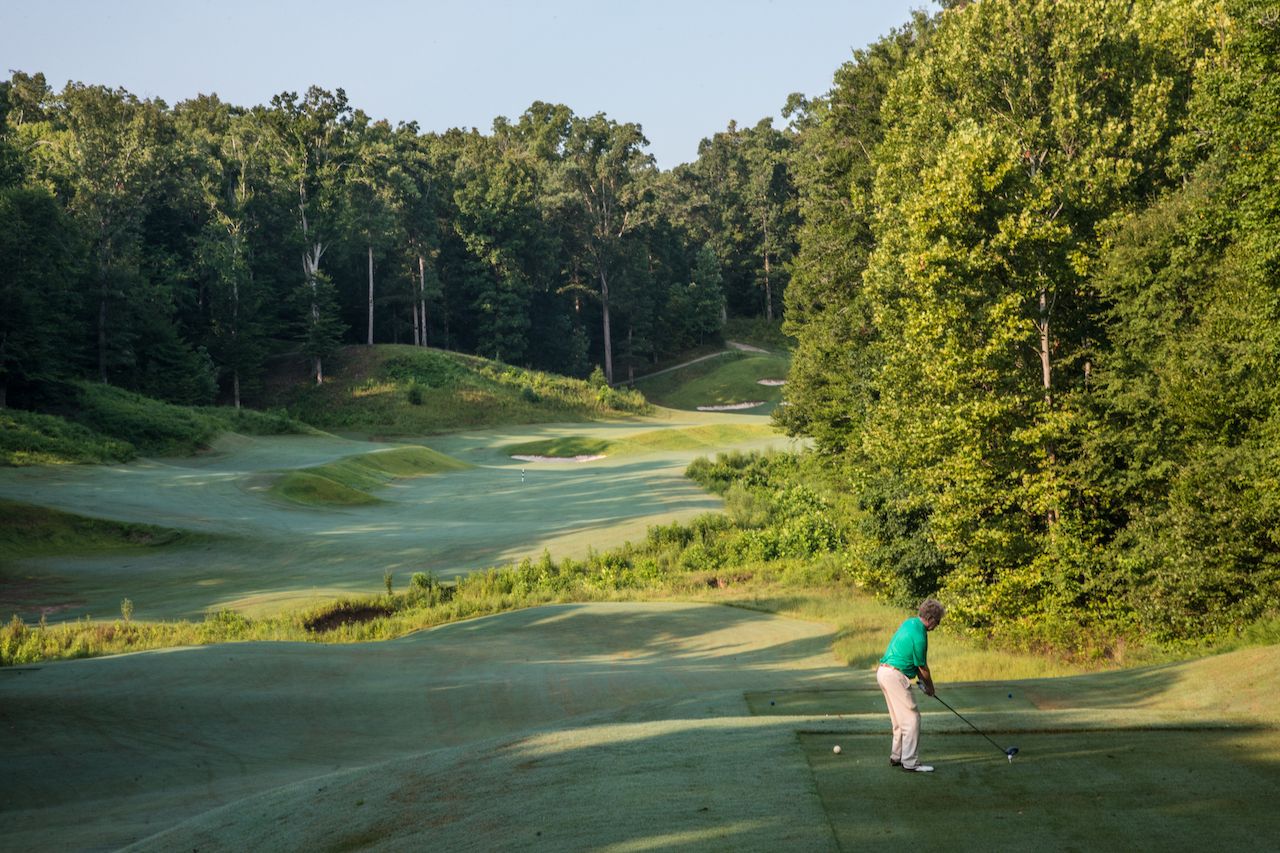 In Arkansas’ upper Delta region, the unique element of Village Creek State Park is the Andy Dye-designed 27-hole championship golf course set on the park’s forested hills. The nearly 7,000-acre preserved area, located about an hour from the Mississippi River, also has 33 miles of multi-use trails, not only used by hikers and mountain bikers but also horseback riders.

The equestrian campground and stables have horse stalls with wash bays and other conveniences to help riders unwind after a day in the saddle. Guests can also stay in modern cabins with full kitchens and satellite television or campgrounds with bathhouses. A small museum and visitor center helps interpret all the park and region has to offer. 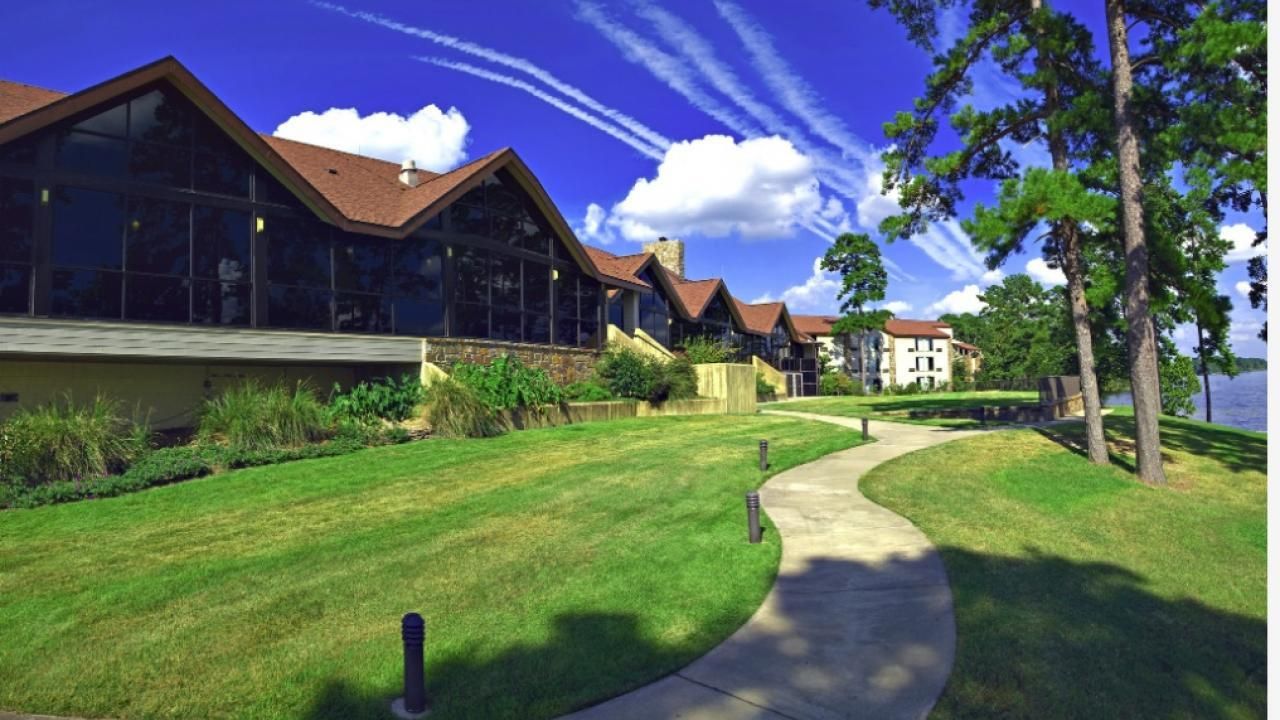 Located on the shores of DeGray Lake just minutes from the popular tourist town of Hot Springs, the lodging and amenities at DeGray Lake Resort State Park are definitely more resort-oriented than what you would typically expect from a state park. The park’s 94-room lodge and convention center with a large swimming pool and on-site restaurant are on an island accessed by a causeway from the mainland.

Visitors looking for sporting fun can take advantage of an 18-hole championship golf course, pro shop, disc golf course, and tennis courts. Outdoorsy folks can hit the hiking trails, take a guided horseback ride, go fishing, and camp at one of the 113 campsites, most of which are surrounded by shade trees. 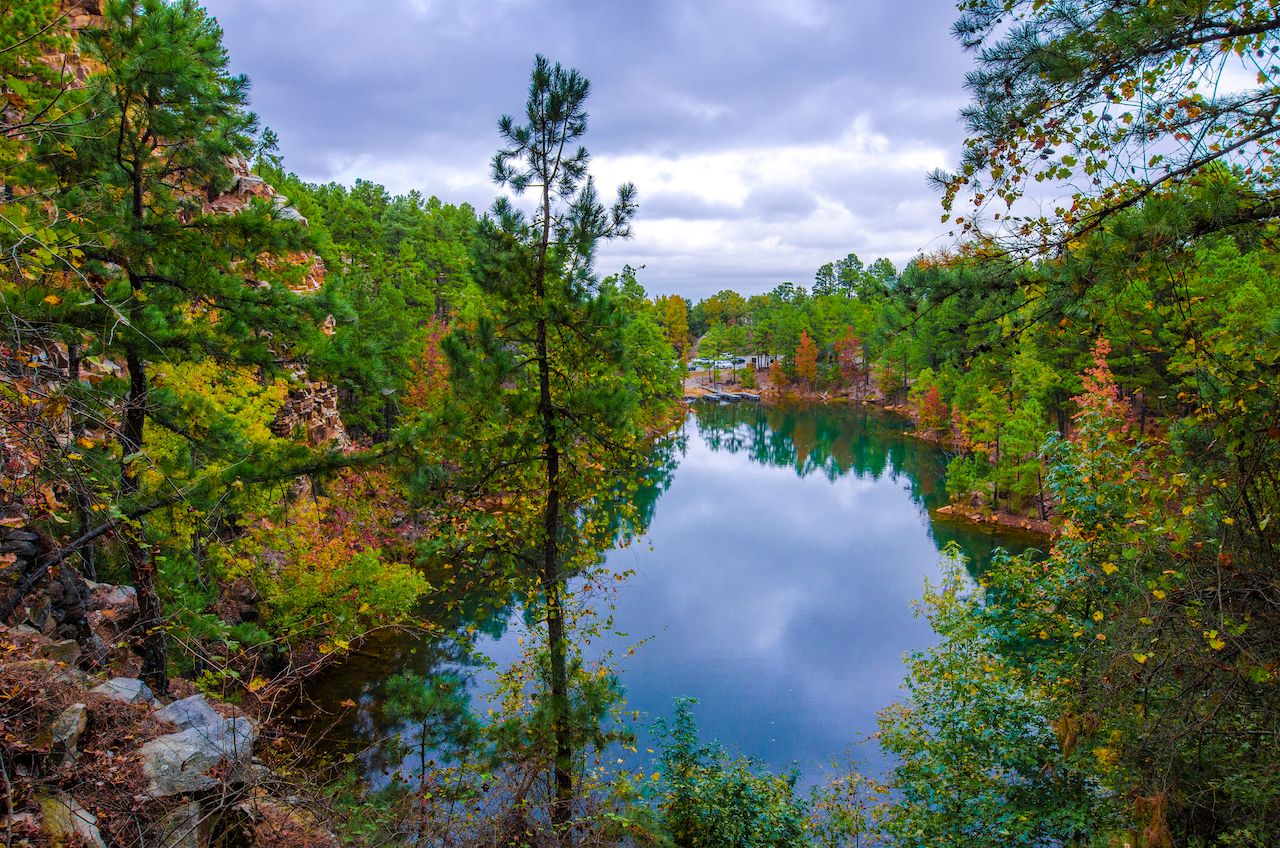 Minutes from Arkansas’ capital city of Little Rock is the iconic Pinnacle Mountain State Park. Hiking to the cone-shaped top of Pinnacle Mountain is a must-do for an incredible view and bragging rights too. An east and west trail lead to the summit and both are strenuous but the east trail is somewhat more rugged, crossing several boulder fields. There are more than 40 miles of hiking and mountain biking trails for all experience levels. 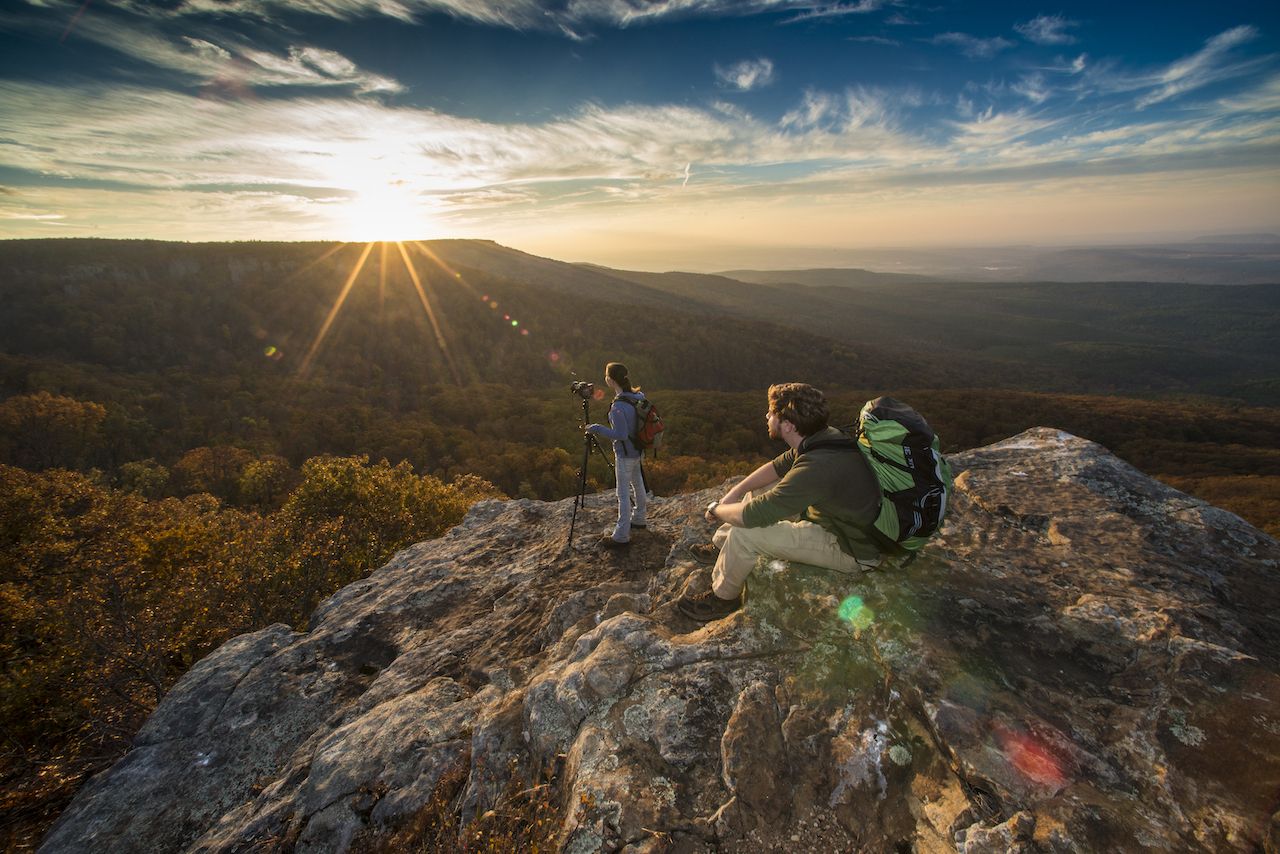 Mount Magazine State Park, which includes the state’s highest point at 2,753 feet, is all about the views. Every room in the park’s lodge — which includes a swimming pool, fitness center, and game room — looks out to the Petit Jean River Valley and Blue Mountain Lake below. Thirteen cabins also share the same view. There’s plenty of big adventures to be had here too including hiking, biking, rock climbing, hang gliding, and horseback riding.

Best hikes with stunning views in the Ozark Mountains

12 incredible moments you’ll have on a trip to Arkansas