Turkey is a country that knows how to eat. This vast and beautiful country is a land of sun-drenched red peppers and olives, fresh bread baked daily, and fresh and inexpensive pomegranate juice sold at the roadside. With an emphasis on fresh produce and seasonal ingredients, Turkey has a food culture that runs deep. Many dishes in Turkish cuisine naturally lean toward the vegan and vegetarian side, making a meatless diet in Turkey near effortless. With delectable dishes such as stuffed dolmas, fresh gözleme (a dairy-free stuffed pancake), and easily accessible fruits and vegetables, you’ll eat like a sultan in Turkey. Here, we’ve gathered 10 vegan foods that everyone, whether you love to eat meat or disavow it entirely, are must-tries the next time you’re traveling in Turkey. 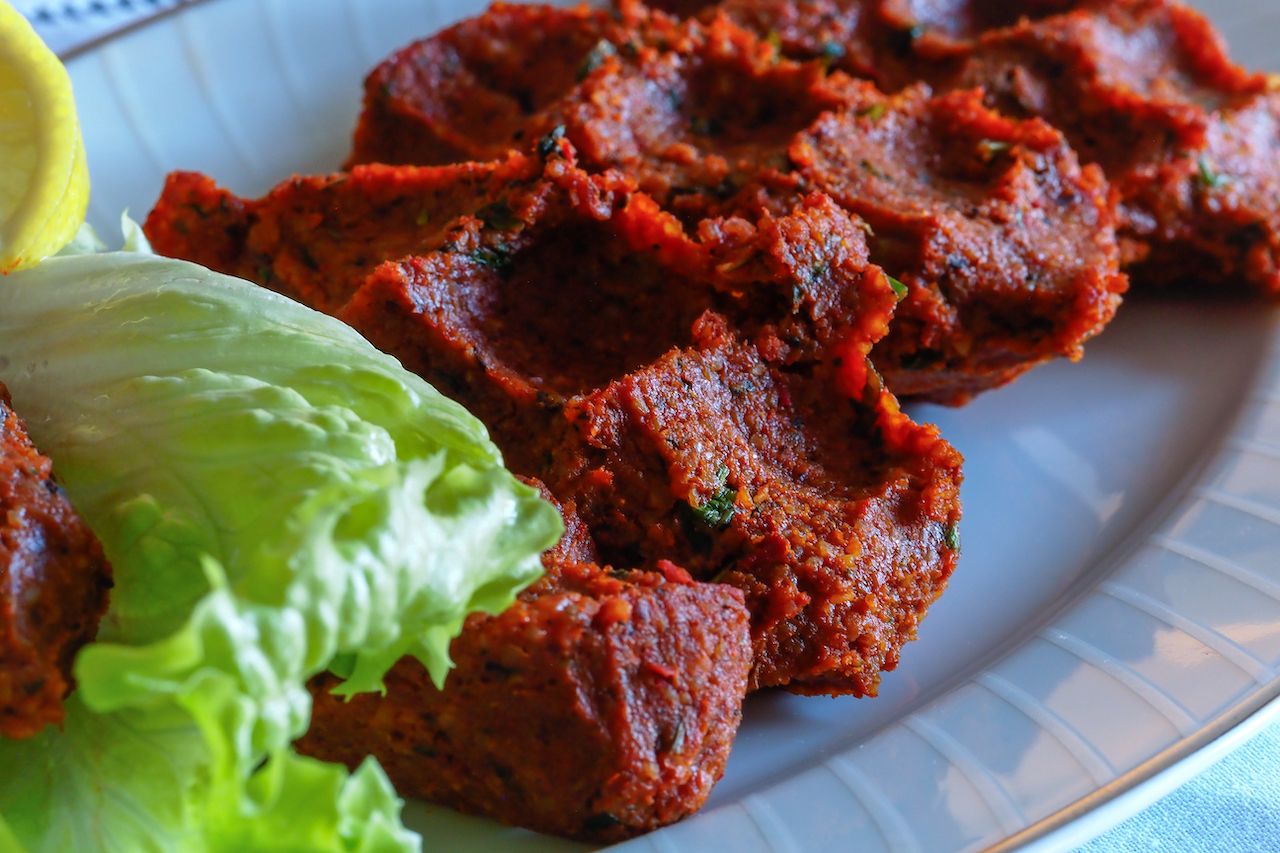 Essentially spicy snacks made from bulgar wheat, çiğ köfte hails from the southeastern part of Turkey. Spiced with tomato paste, onion and garlic, and Turkish pepper, then topped with pomegranate molasses, the cigar-shaped ciğ köfte are usually eaten wrapped in a fresh lettuce leaf. The bulgar is hand mixed to create a creamy, delicious texture and is said to have been part of Turkish cuisine for at least 3,000 years. Do be mindful, this dish can be made with raw beef or lamb meat, so ask ahead of time to double check that you’re ordering the bulgar version. 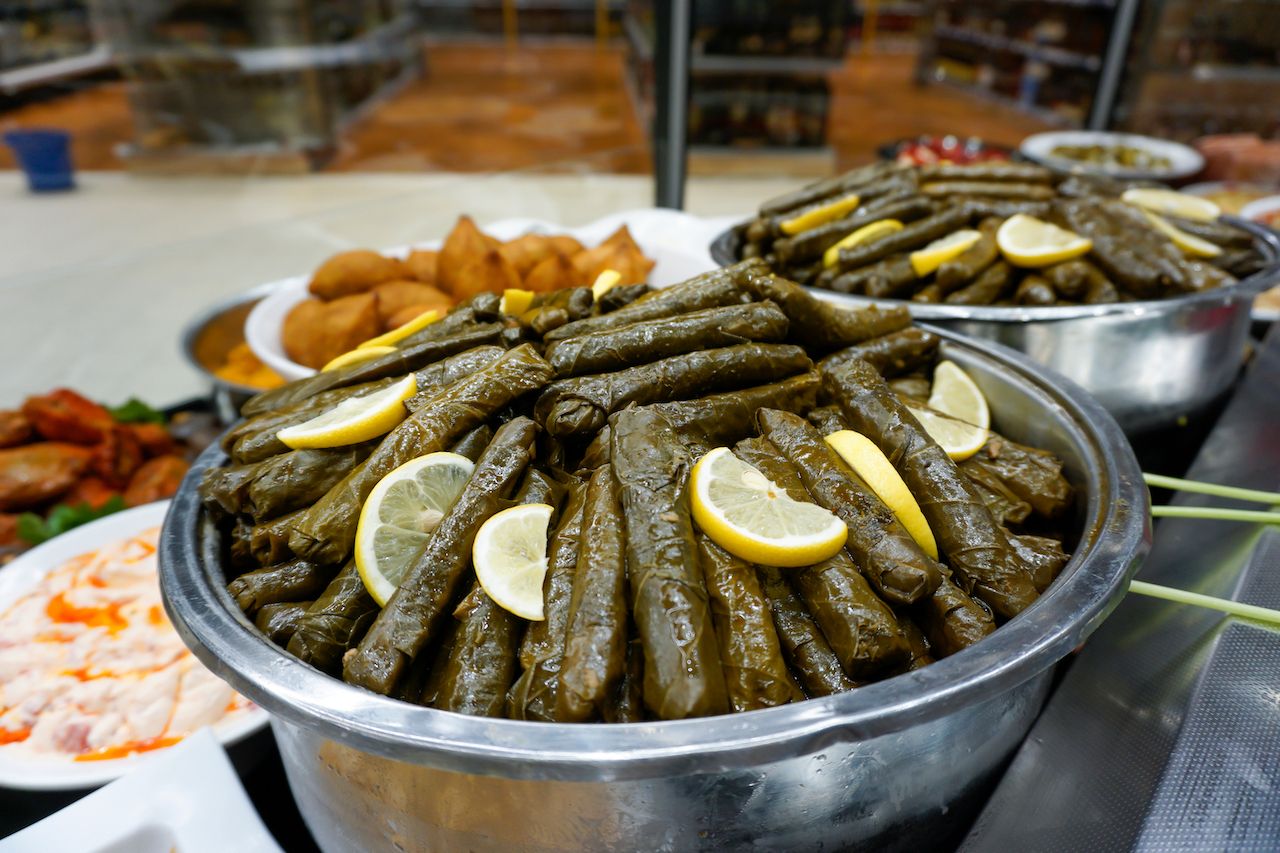 Dolma is a generic term in Turkey for any vegetable stuffed with rice. However, the best known dolmas are the delicious grape leaves filled with rice and spices. Like çiğ köfte, dolmas can be made with meat, so be sure to order the vegetarian/vegan (all vegetarian dolmas will also be vegan) option. Quite time consuming to make, dolmas are hand rolled and are a real treat. Dolmas are also found in Greece, the Balkans, and throughout the Middle East, so once you get a taste for them, you can become a gourmand in the nuances of the dolma. 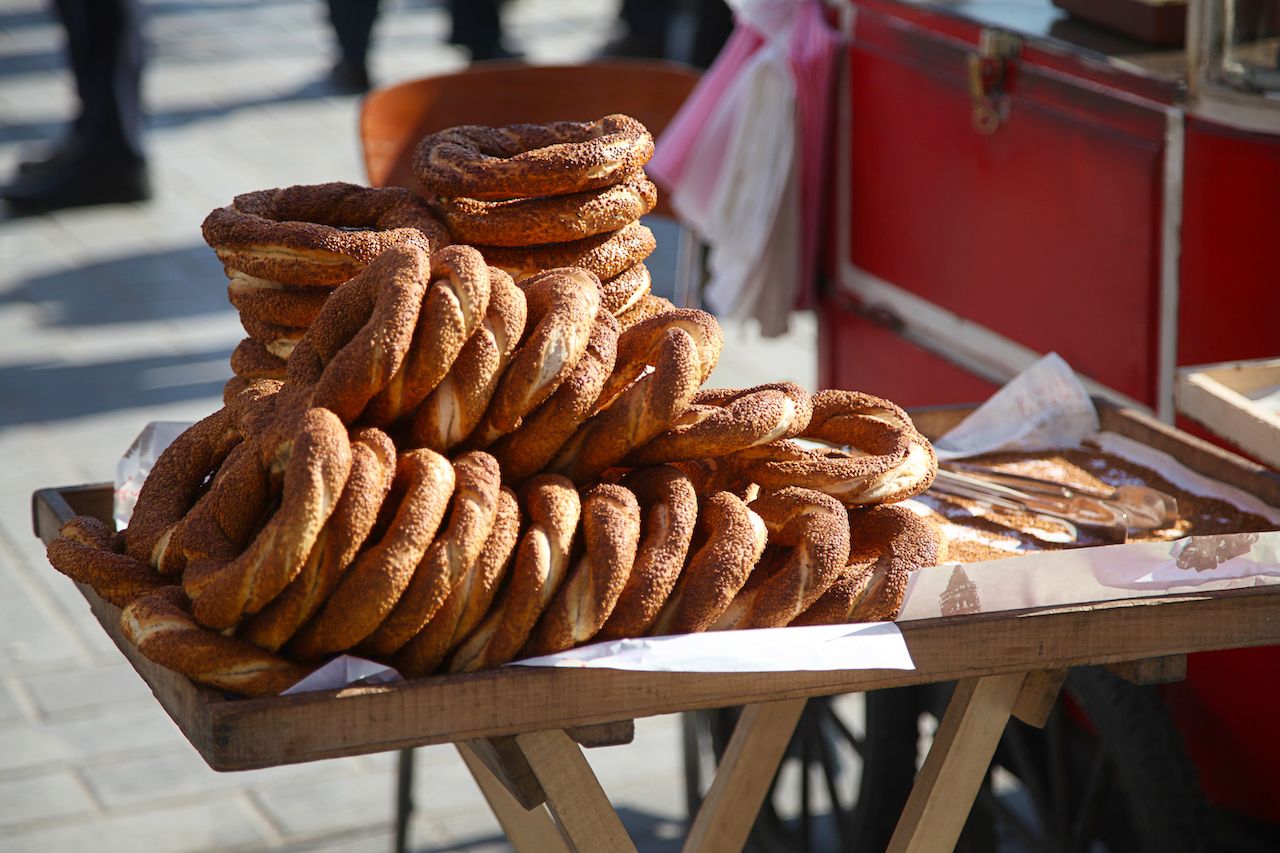 Simits are traditional bagel-like street food covered in sesame seeds, sold throughout Turkey for literally pennies. Simit are thinner than bagels and shaped more like a ring, however. If you know nothing about Turkish cuisine you should know this; black tea is pretty much the central culinary tradition that binds every social gathering and business function. Like the simit, you can find tea vendors easily on the streets of any Turkish locale. Simit is best enjoyed with a tulip-shaped glass of black tea — or “red tea” as Turks will call it — generally with a spoonful of sugar (or two) in it. 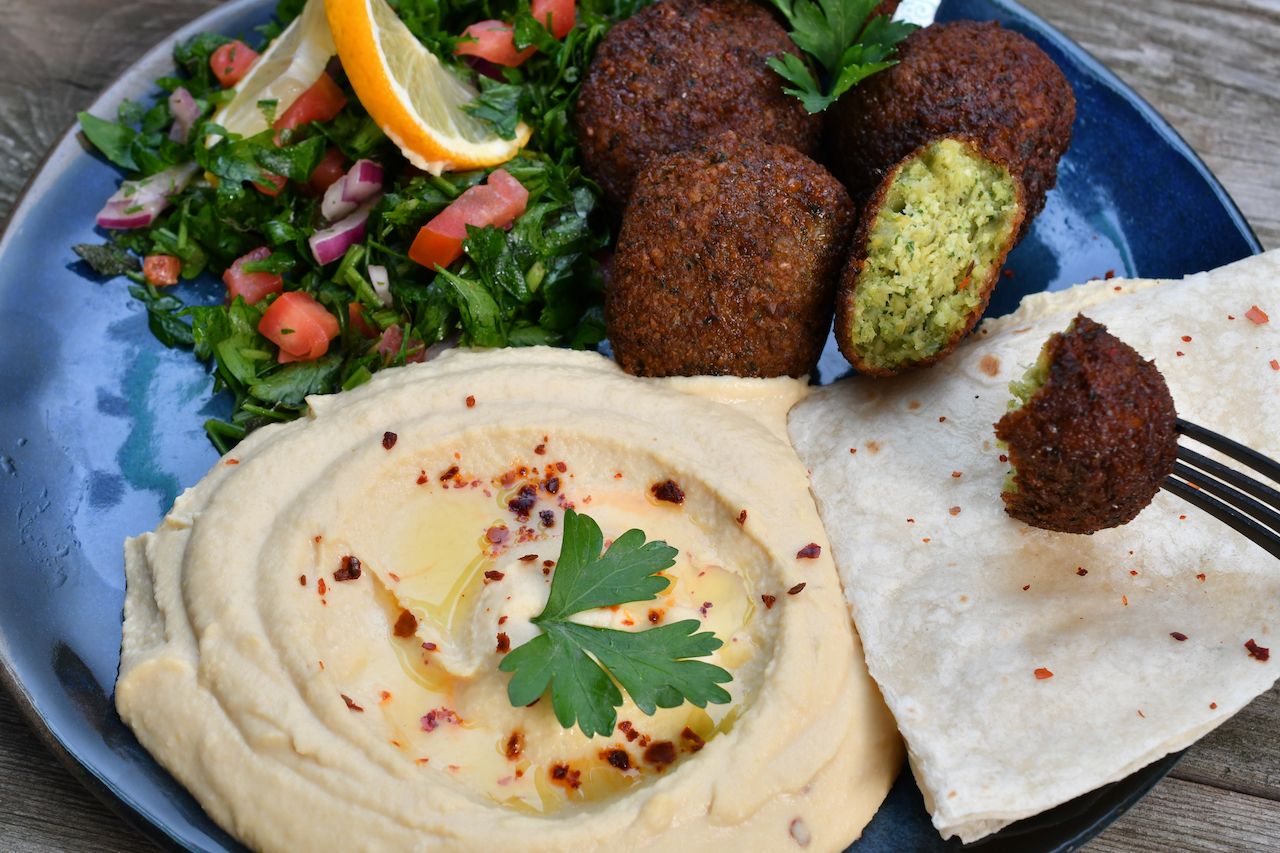 Sure, every vegan and vegetarian has had their fair share of hummus, but have you had Turkish hummus before? Again, ingredients are everything in Turkish cuisine, and so the normal ho-hum hummus gets raised to a new level with local garbanzo beans, local tahini, local lemon, and you guessed it — olive oil that probably traveled from the village next door. Found on the mezze, or small plate, menu, hummus is perfect as a snack or part of a light meal. 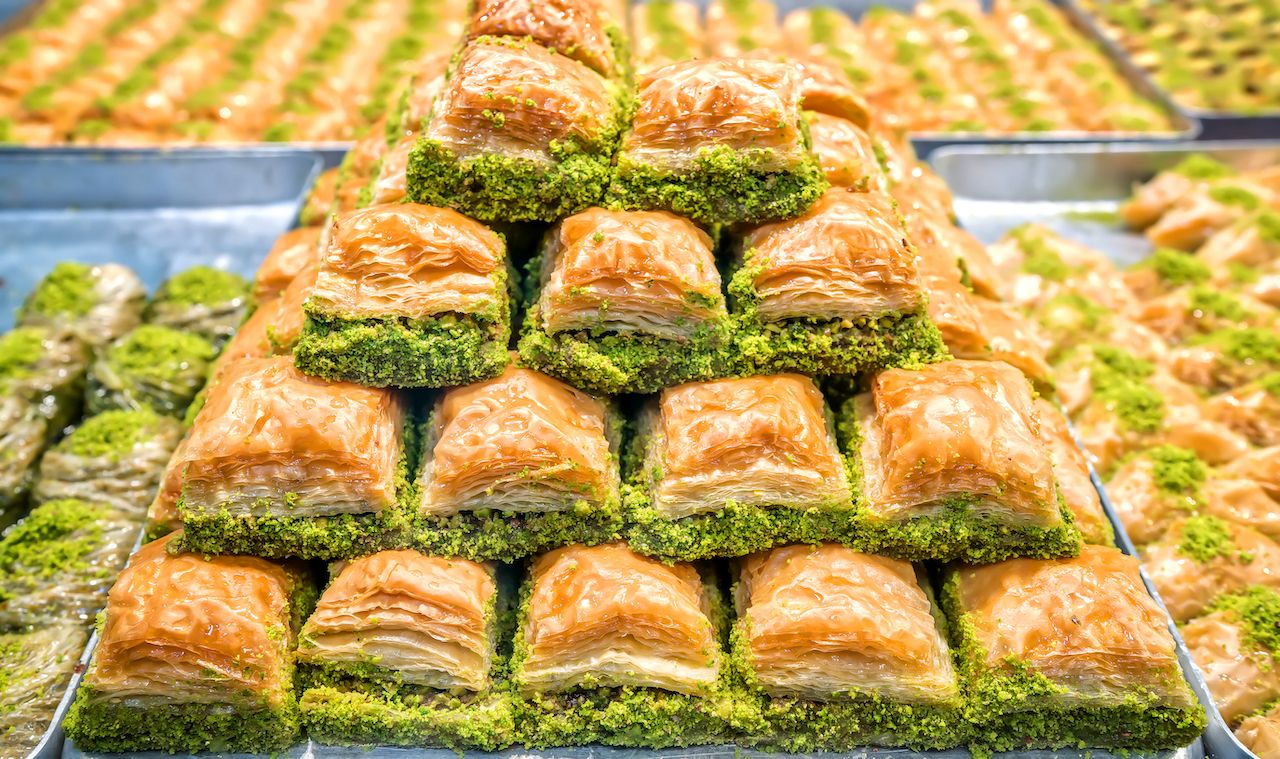 Traditional baklava is sometimes made with butter, although it depends on what bakery you visit. In a big city like Istanbul it will be easy to find vegan baklava. Phyllo dough, on the other hand, tends to be completely vegan. Probably the most famous place in the world to get baklava, Karaköy Güllüoğlu, only makes olive-oil based baklava. You must also double check that the baklava is made with sugar instead of honey, if you are a strict vegan. 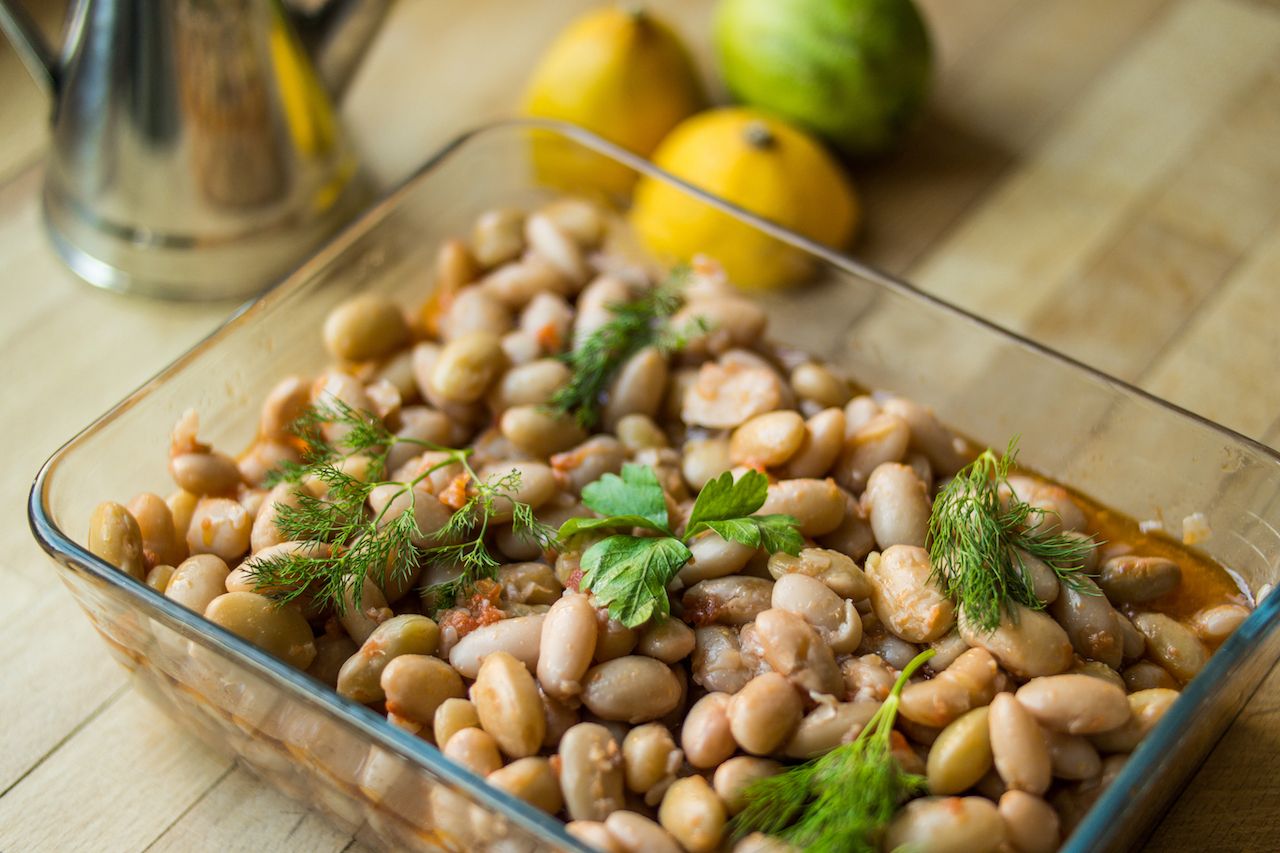 The centerpiece of a Turkish meal is mezze, or small dishes that are generally shared over conversation, and pilaki is always on the mezze menu. Pilaki is made from fresh borlotti beans cooked in olive oil, in a sauce of tomatoes, carrots, and potatoes. It is generally served cold or room temperature, topped with parsley, and a side of bread. This is a great dish to try and replicate at home, as it’s fairly easy to cook. 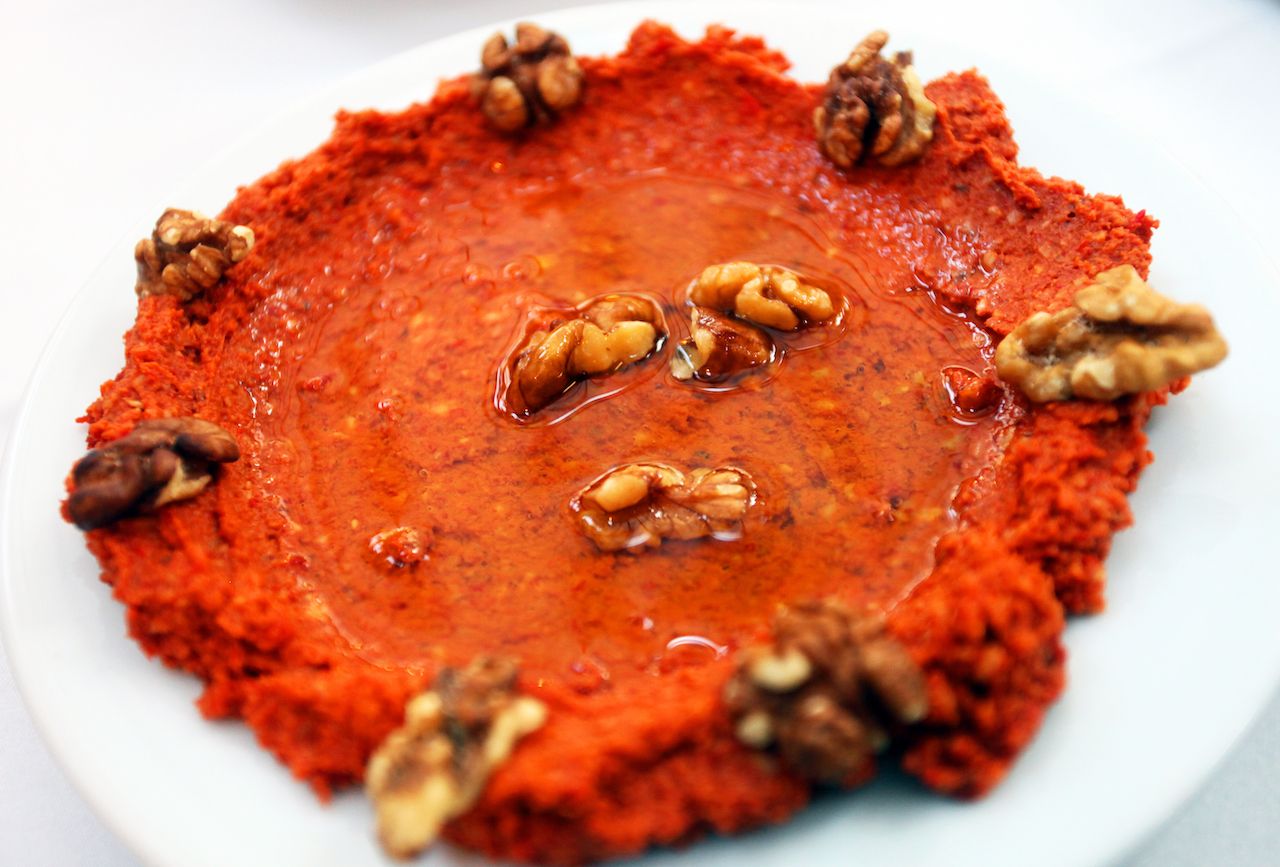 Muhammara is a delectable spread of red peppers, ground walnuts, breadcrumbs, and tomato paste. Originally from Aleppo, Syria (which borders Turkey), this hot pepper dip is out of this world with flavor. Savory, a bit sweet, and also spicy, there’s nothing quite like muhammara. The name muhammara comes from the Arabic word “ahmar or hamra,” meaning red, as this dip is a tantalizing crimson. 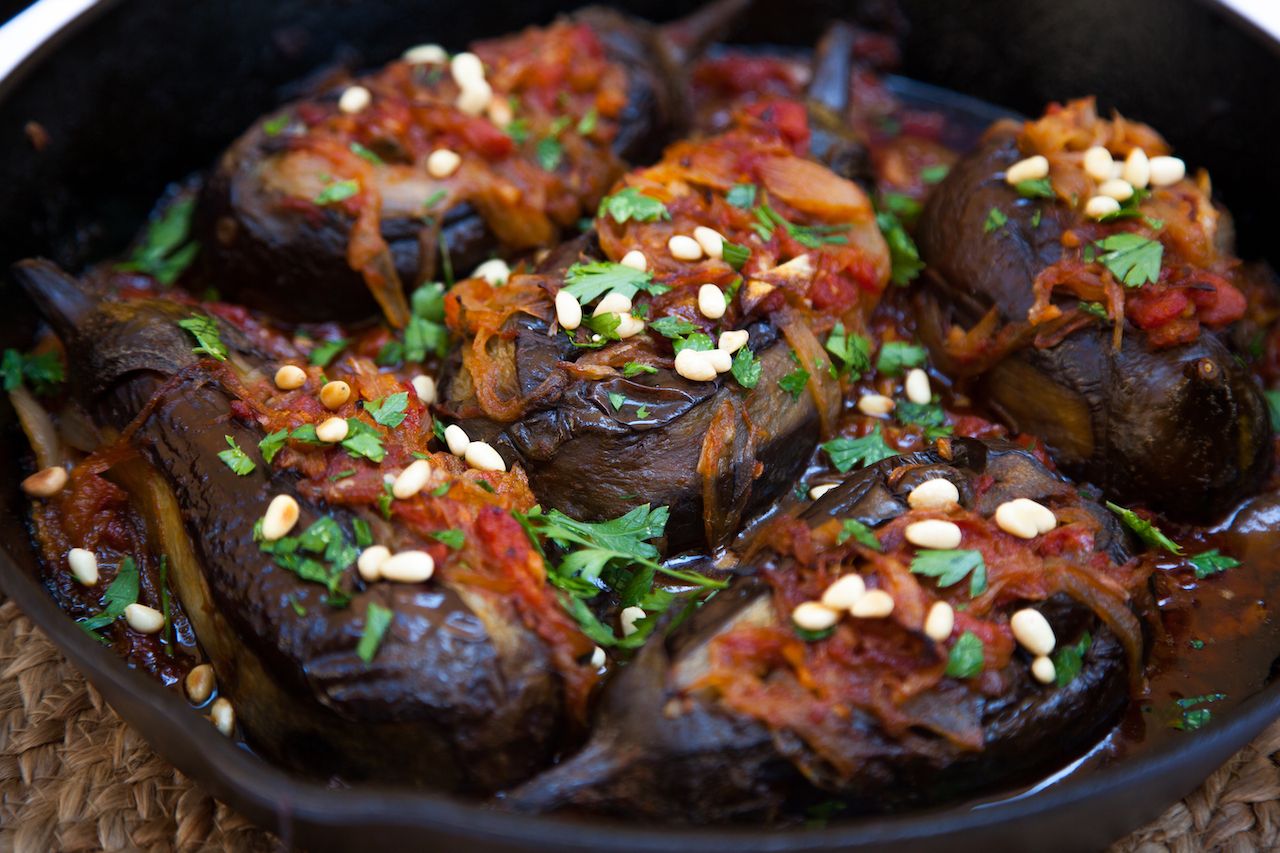 This stuffed eggplant dish can be made vegan-style, with a filling of tomatoes, peppers, and parsley, and, of course, a healthy dose of olive oil. The name means “the imam fainted,” apparently because it is just that good. İmam bayıldı has been served since at least the era of the Ottoman Empire. Eat it with rice or crusty bread, and you’ll be satisfied. 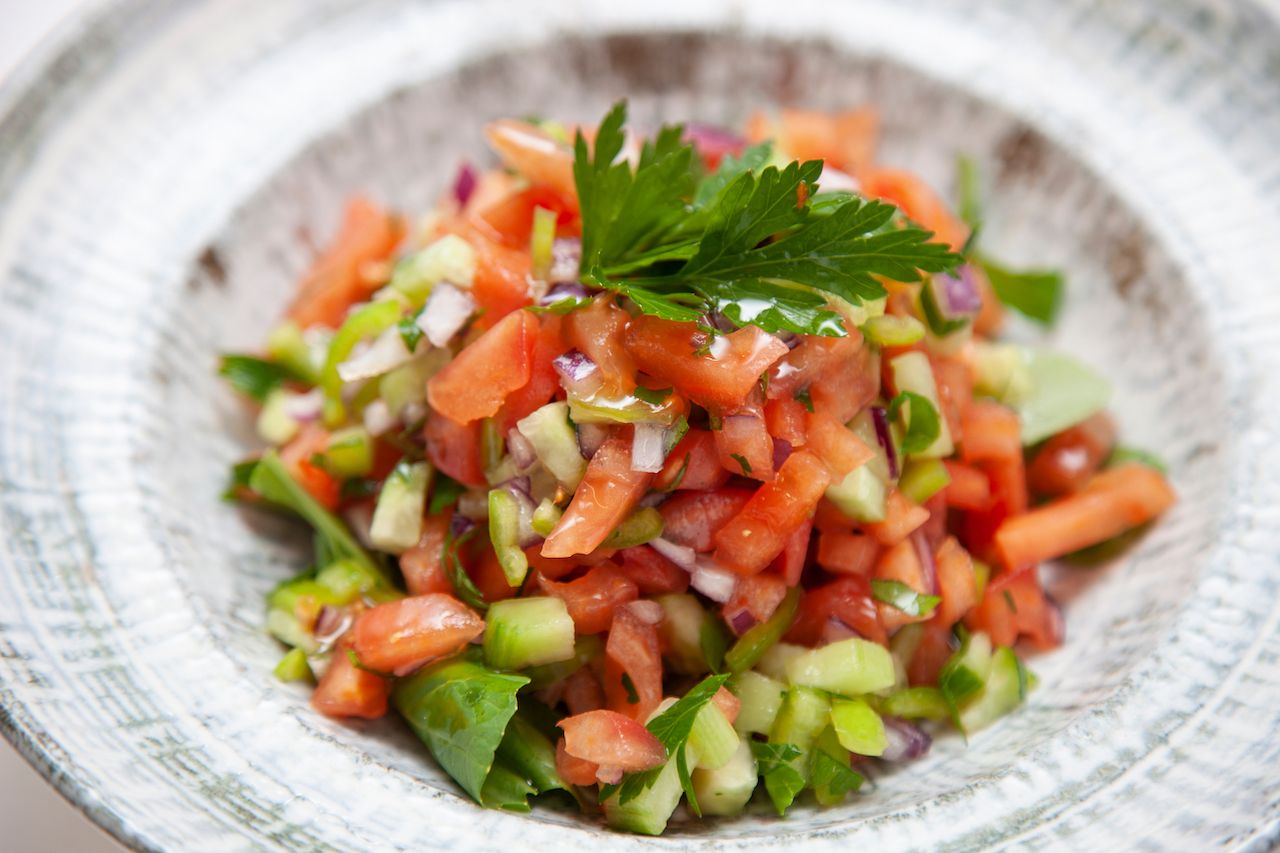 This traditional “shepherd’s salad” is found throughout Turkey and Greece, and is a staple in the cuisine of the Mediterranean region. Accompanying most meals, çoban salatası is made of finely chopped tomatoes, cucumbers, green peppers, onions, and sometimes olives. This salad is at its finest when all ingredients are fresh and in season. 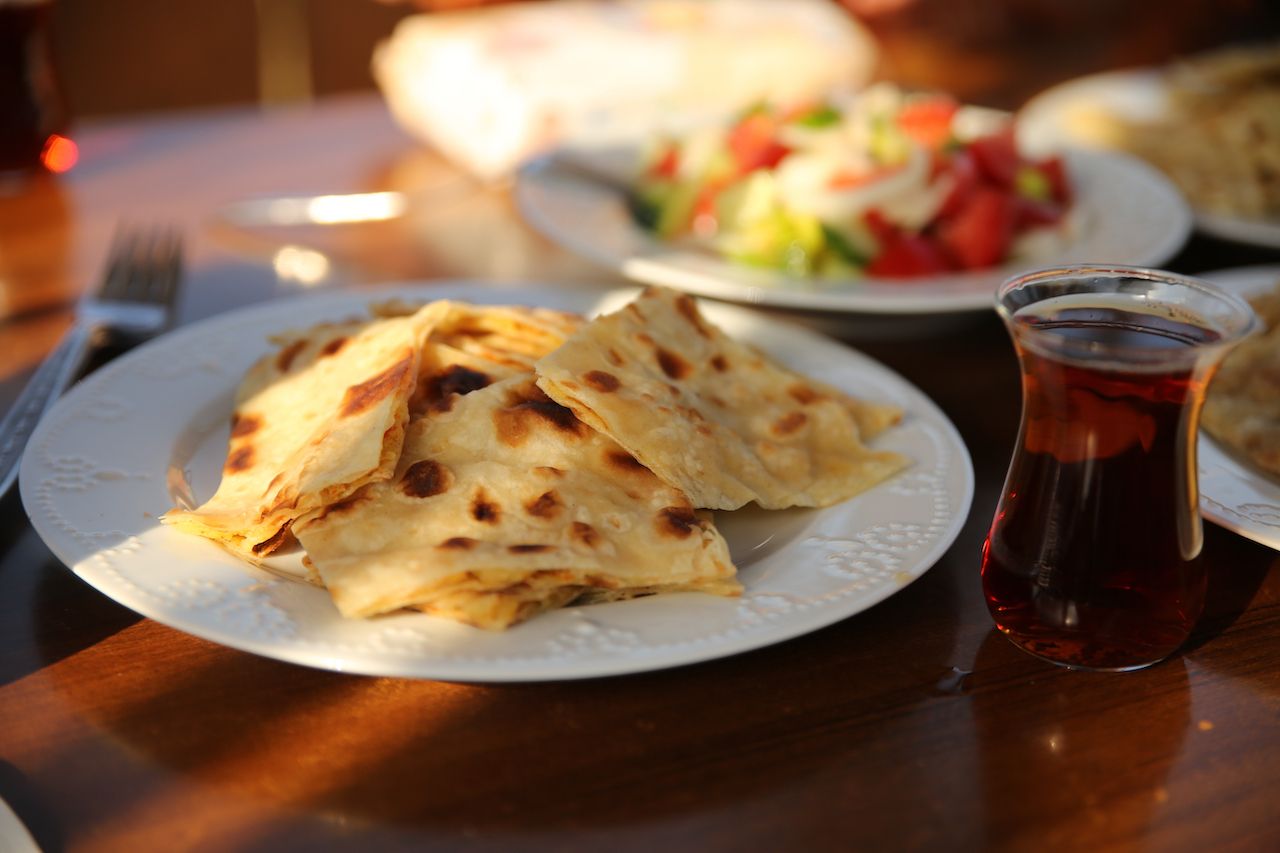 Gözleme is a thin, dairy-less pancake stuffed with savory or sweet fillings. The dough is unleavened and made only with flour, water, and salt, and fillings can include potatoes, spinach, mushrooms, or herbs. Sweet fillings may include fresh fruit, jams, or Nutella. Gözleme is a healthy fast food in Turkey, and can often be found at roadside stands. Though originally from the central Anatolian region, it is a dish that has been integrated into the food scene in most of Turkey’s major metropolitan cities.

Food + DrinkTurkish Breakfasts Are the Best in the World, and It’s Not Even Close
Tagged
Vegetarian Turkey
What did you think of this story?
Meh
Good
Awesome