You can eat breakfast in every country in the world and not find anything that matches up to a Turkish kahvalti. Literally translating to “before coffee,” kahvalti is all about sharing and connection. While much of the rest of the world views breakfast as a routine necessity, in Turkey, kahvalti, a traditional Turkish breakfast, is a gathering that brings — and keeps — friends and family together.

The Turkish tradition of enjoying long meals as a social event dates back to the Ottoman Empire, which was in power for some 600 years. As the empire expanded, its culinary traditions and dishes did also, picking up influences from the Middle East, Central Asia, and Eastern Europe. Turkish food developed over centuries and is influenced by trade routes, proximity to the sea, the cultural influence of expansion and migration, and long-standing social culinary traditions.

Turkish food isn’t as ubiquitous in the US as food from France, China, or Italy, but it’s regarded as one of the greatest in the world. When Anthony Bourdain visited Istanbul in 2015, the food and drinks (many drinks) were pretty much all that kept his mind off of the political turmoil in the country.

The next day, I was welcomed with warm tea, followed by cucumbers, tomatoes, cheeses, olives, sauces, bread, honey, and fresh menemen.

I thought he was being overly generous, offering every type of food in hopes to serve me something I liked. But I soon found that this was normal and part of a longstanding breakfast tradition. I’ve since enjoyed many a Turkish breakfast, and I’ve found that no two kahvaltis are the same. Every person has their preferences, and every restaurant has its own unique spin. While the food in Turkey is nothing to scoff at, the social aspect of the affair is really what it’s all about. Today more than ever, it’s about disconnecting from technology and connecting with the person sitting across from you. While modern lifestyles might not allow for a full kahvalti every morning, Sunday kahvalti is an important ritual in modern Turkish culture.

The food served may vary, but what matters is the company. As my Turkish friend, Mujdat, puts it, “It’s not about what you eat, but who you eat with.”

What is in a typical Turkish breakfast? 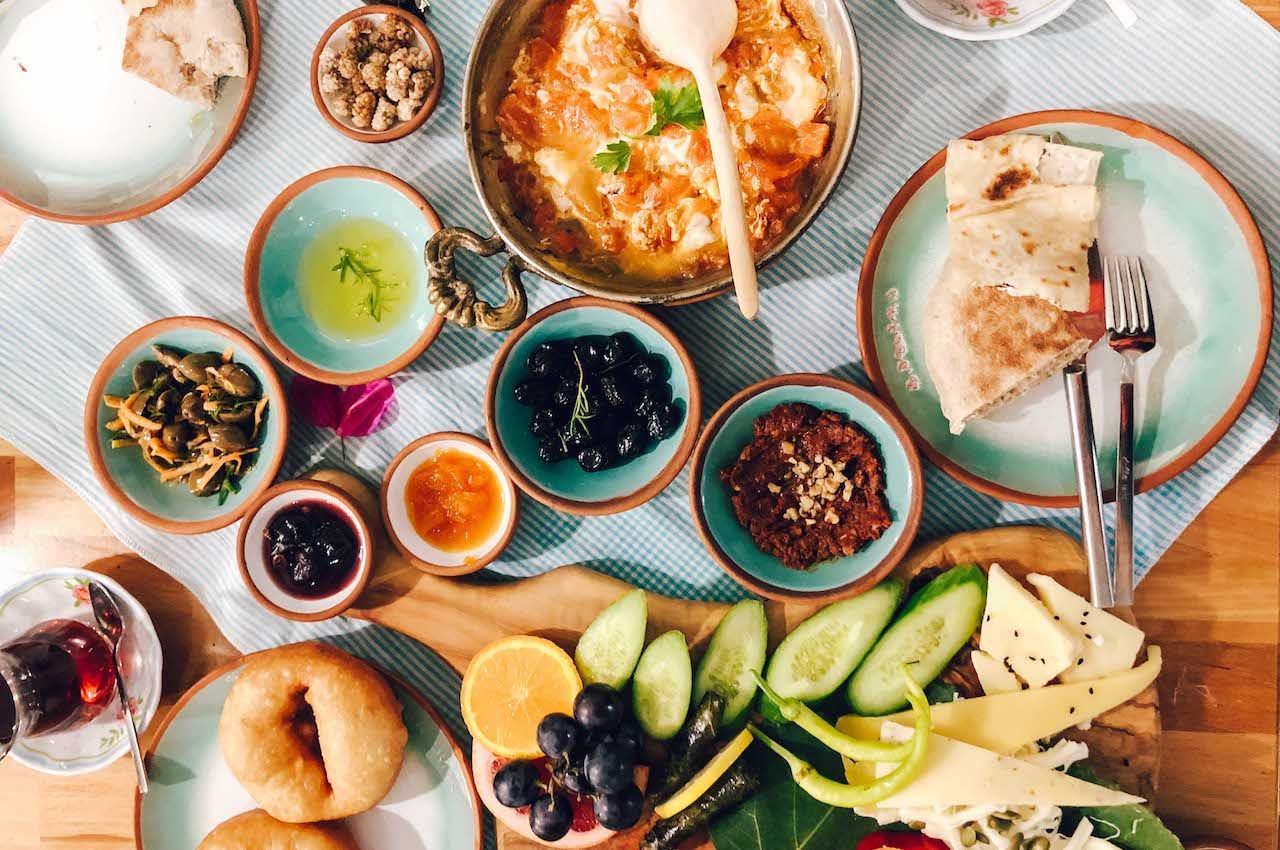 A Turkish breakfast isn’t just one dish but rather a spread of bite-sized, Turkish delicacies. A classic kahvalti spread varies by region but is generally comprised of cheeses, pastries, dips and sauces, olives, eggs, fresh tomatoes, cucumber, bread, cured meats, honey, and multiple types of jam. Along with the food, no kahvalti is complete without a freshly brewed cup of tea.

From my kahvalti experience in restaurants in Istanbul, I noticed a pattern. First came freshly brewed black tea in an hourglass-shaped cup as soon as you sit down. As you sip the tea, you’re given a small plate and cutlery to prepare you for the lineup. Next comes a copper pan with eggs that are closely followed by a bowl of tomatoes and cucumbers, followed by a platter of 10 types of cheeses, followed by a few bowls of different types of olives, followed by a basket of bread, followed by a basket of pastries. Just when you think the affair is over, another waiter shows up with an entire platter full of tiny plates. The contents range from savory to sweet: tomato paste, olive oil, hummus, yogurt, seasonings, more olives, caramel, clotted cream, several types of jam, and honey. Finally, a platter of fresh fruits and a glass of orange juice arrive to wash the feast down.

The first question to ask yourself at your first kahvalti is, “Where do I even begin?” Reach for a yufka, which is an unleavened Turkish flatbread, first. One bite and you’ll wonder how you ever lived without it. From there, decision fatigue quickly wears off as anything on the table will satisfy.

The goal here isn’t to gorge until you test the elasticity of your stretchy pants; it’s to try a little bit of everything. By the time you dip your lokma, donut-shaped fried sweet bread, in a cream and honey mixture, you’ll see why Turkish kahvalti continues to be a tradition, even in today’s fast-paced world.

Where to find the best kahvalti in Istanbul 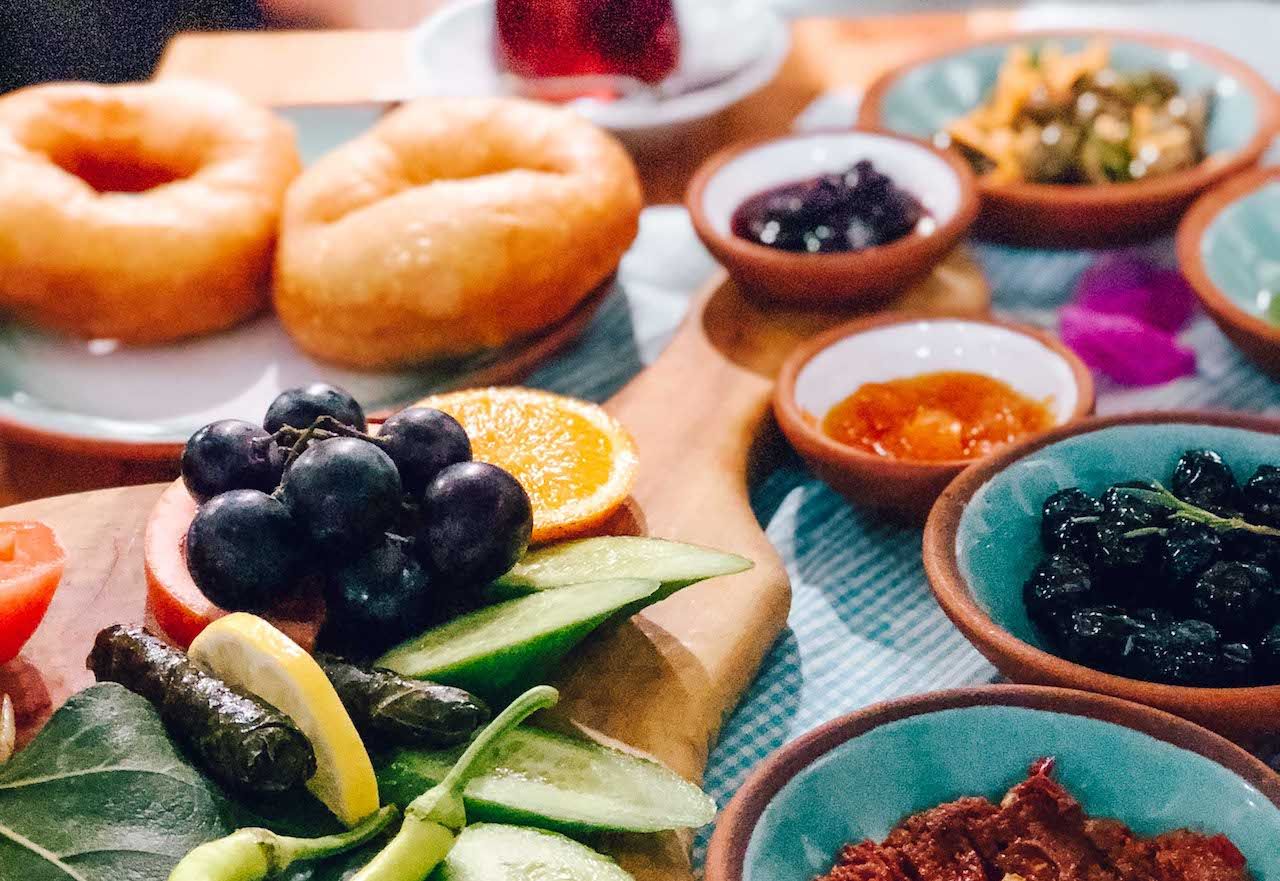 Cesme Bazlama: This small, family-run restaurant with a big personality might just become your favorite spot in Istanbul. The bread is made fresh right in front of you, and the yufka is delivered straight to your table while still warm. There’s a set menu, so you get a little bit of everything. Eat a light dinner the night before and go before 10:00 AM to beat the lines.

Arada Cafe: This is an amazing, if lesser-known, breakfast spot. Located on a quiet street near the Galata tower, this cafe is a bit more low-key than your usual cafes. Whether you’re sitting outside by the plants or inside under the fairy lights, this cafe is a feast for the eyes, as well as your stomach.

Zoo Cafe Kadikoy: Located on the Asian side of Istanbul, Zoo Cafe Kadikoy is, as the name suggests, animal themed. Its Turkish breakfast is a lighter, healthier variation of the classic kahvalti.

Food + Drink16 Foods You Have To Try on Your Trip To Turkey
Tagged
Food + Drink Insider Guides Turkey
What did you think of this story?
Meh
Good
Awesome