Cappadocia, the region in central Turkey characterized by unusual rock formations often dubbed “fairy chimneys,” was recognized as a UNESCO World Heritage site in 1985. Wind and water shaped the region’s soft volcanic rock into towers and pinnacles, and humans later carved up the landscape to make cave homes, churches, and even entire cities below ground.

Cappadocia is one of the world’s great sights, so if you have some time in Turkey, make sure to reserve a weekend in the area to see the highlights.

Fly from Istanbul to the airport cities of Kayseri or Nevşehir in about one hour, then drive an hour to Cappadocia’s most popular tourist destinations of Göreme, Urgüp, or Uçhisar. The cities can also be easily reached via Turkey’s comfortable long-distance bus network.

Most people stay in Göreme and splurge for a cave hotel. Urgüp and Uçhisar are less touristy but still have plenty to offer; the area’s other towns are more tranquil still. Every style of lodging is available. Kelebek Special Cave Hotel in Göreme is an excellent mid-range choice. One of Cappadocia’s best hotels is Ariana Sustainable Luxury Lodge in Uçhisar.

Day one in Cappadocia: Get your feet wet 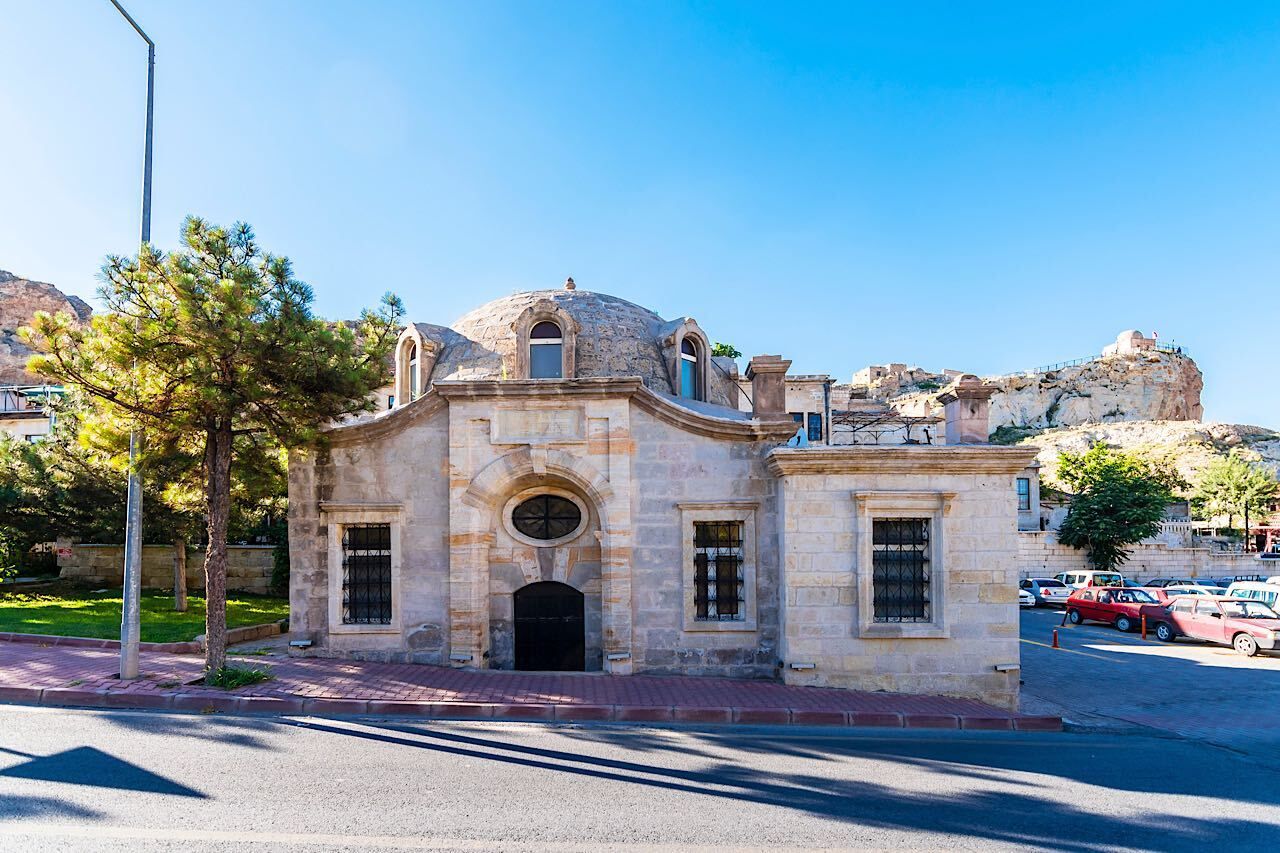 When you check in at your hotel, ask for advice on choosing a hammam. Your first evening in Cappadocia is ideal for your appointment since the treatment will knock you right out. At a Turkish hammam, you’ll lose all your dead skin via an abrasive kese glove, get covered with so many soap bubbles you’ll feel like you’re made of whipped cream, and get the most vigorous massage of your life.

Some hammams focus on a local clientele while others are aimed at tourists. Your hotel may have one too. Large hammams have different areas for men and women; smaller ones have specific times for women only, men only, or when couples are welcomed. Ask for advice on treatment options and what to wear underneath the peştemal towel you’ll be supplied with.

After you’ve secured your hammam appointment and taken a photo of your cave room, it’s time to start exploring.

Get a feel for whichever town you choose by first wandering through its side streets. Keep your eye out for unusual rock formations and caves. While some caves are used by residents for storage, some are open to the public; you might find ancient tech like stone mills within. In the center of town, check out the open-air food markets and start scoping the restaurants and shops you want to visit.

Street snacks to look for throughout your weekend include freshly squeezed orange juice, bagel-like round simit, pita-wrapped dürüm sandwiches, and kumpir, or baked potatoes with toppings of your choice. Look for street vendors frying lokma — tiny doughnuts. Cherry juice is on offer year-round, with the fruit in season from April to August. Pumpkin seeds and desserts are popular in September. Whether in winter or summer, don’t miss dondurma — Turkish ice cream. Its taffy-like texture is due to the addition of pine tree resin and powdered orchid bulb. 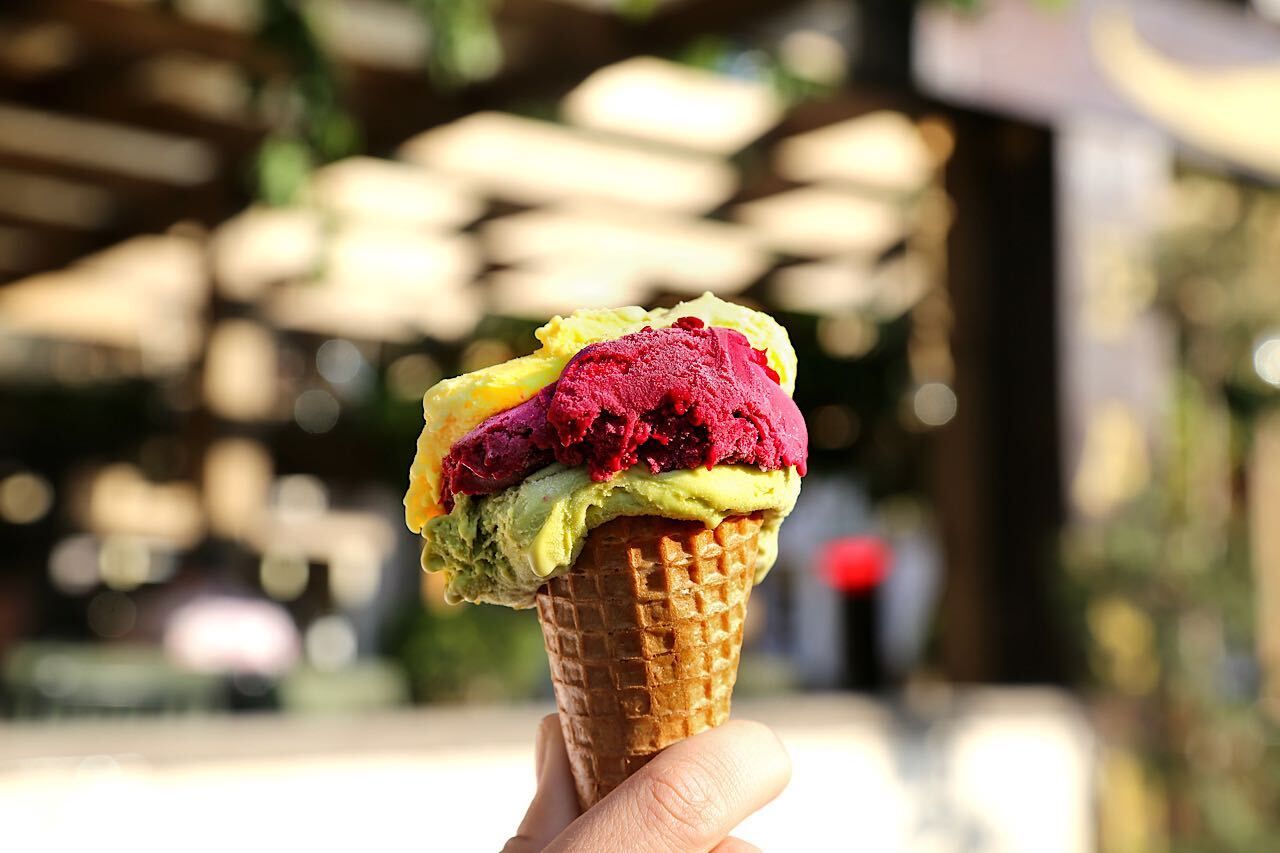 Have dinner early so there’s time to digest before your hammam visit. You can find typical Western dishes at most Cappadocian restaurants, but look for Turkish specialties instead. Nevşehir mantı is local ravioli served with a garlic yogurt sauce. Kofte are spiced ground meats, usually beef or lamb, pressed into various shapes. Mercimek köfte is a vegetarian version made from red lentils and bulgur. Kayisi yahnisi is a mixture of meat and apricots cooked in a clay pot. The Turkish version of spanakopita is called gozleme. Pide — wood-fired pizza — is a favorite of even picky eaters. Lahmacun is the version topped with a mixture of minced beef or lamb, onion, and red peppers, best finished with a sprinkle of fresh parsley and squirt of lemon.

For tomorrow’s dinner, place an advance order for the traditional version of testi kebab, Cappadocia’s signature dish. Lentils, meat, and vegetables are slow-cooked in a sealed clay pot in an earthen oven; when it’s time to serve, the pot is broken at the table.

Day two in Cappadocia: Carve out the day for exploring 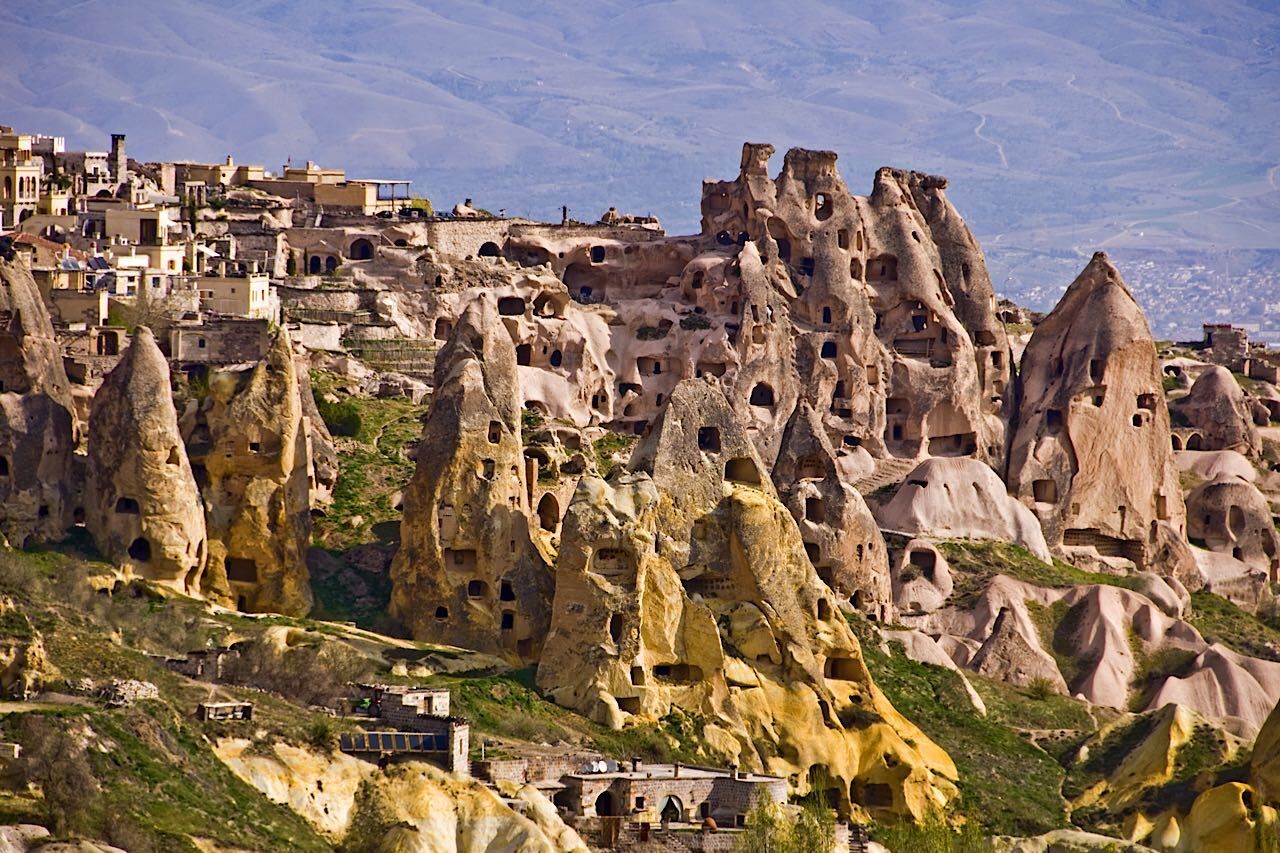 To explore Cappadocia’s rocky features, you can book a ticket for the red, green, or blue tours via several companies (each tour covers a different area). However, we recommend hiring your own driver; that way you choose the specific sites and how long you stay, and you get to skip the shopping stops. A knowledgeable guide will set your imagination soaring rather than just explain the basics.

Cappadocia’s 300-odd underground cities were first dug out of the volcanic ash tuff rock as early as 2,600 years ago and then enlarged over the centuries. The people who normally lived on the surface in houses used them as safe places to hide from invaders, sometimes for months. The cities had fresh air and water, kitchens, wineries, shops, schools, worshipping space, temporary graveyards, stables, and apartments for families. In 2014, a new city was unearthed that’s estimated to be five million square feet and 370 feet deep. Experts think they’re all connected by deep tunnels.

Most people visit Derinkuyu, which once housed 20,000 people in 18 underground stories. Kaymakli, smaller but less crowded, is the second most popular option. While you can wander through on your own, a guide will explain how cooking fire smoke was dissipated so that the cities were invisible from above ground, show you the defenses used in case enemies penetrated, and point out mysteries like how the immense stone wheels that act as doors got inside the narrow tunnels. 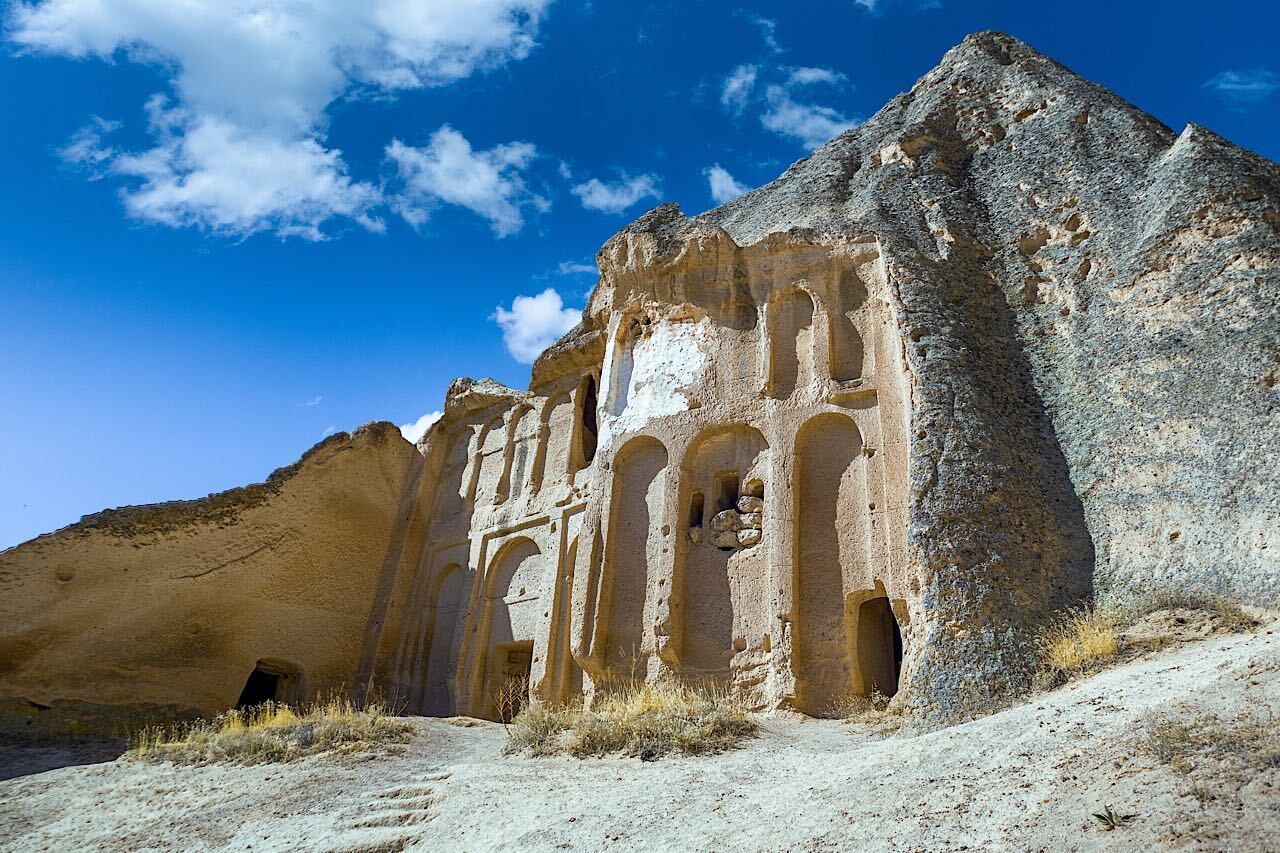 Travelers would be remiss by not visiting the Selime Monastery, carved in the eighth and ninth centuries and later turned into military headquarters. Think of it as a small underground city built into a hill. The lower levels have stables, kitchens, and a cathedral with carved columns and frescoes from the 10th and 11th centuries. As you explore, you’ll discover steep rock-cut stairs and ladders, secret passageways, hidden drop-offs, and ankle-breaking booby traps.

Ask your guide for advice on hikes. If you want to focus on caves, churches, and frescoes, good options are the valleys of Ihlara, Soganli, or Monks. For fairy chimneys, choose Love, Sword, or Devrent valleys (the latter is nicknamed Imagination Valley because of its animal-shaped rocks). Entrance to Pasabag Valley also includes access to the Zelve Open-Air Museum. For a spectacular sunset spot, try Red Valley or, in the city, Uçhisar Castle.

Day three in Cappadocia: Up, up, and away 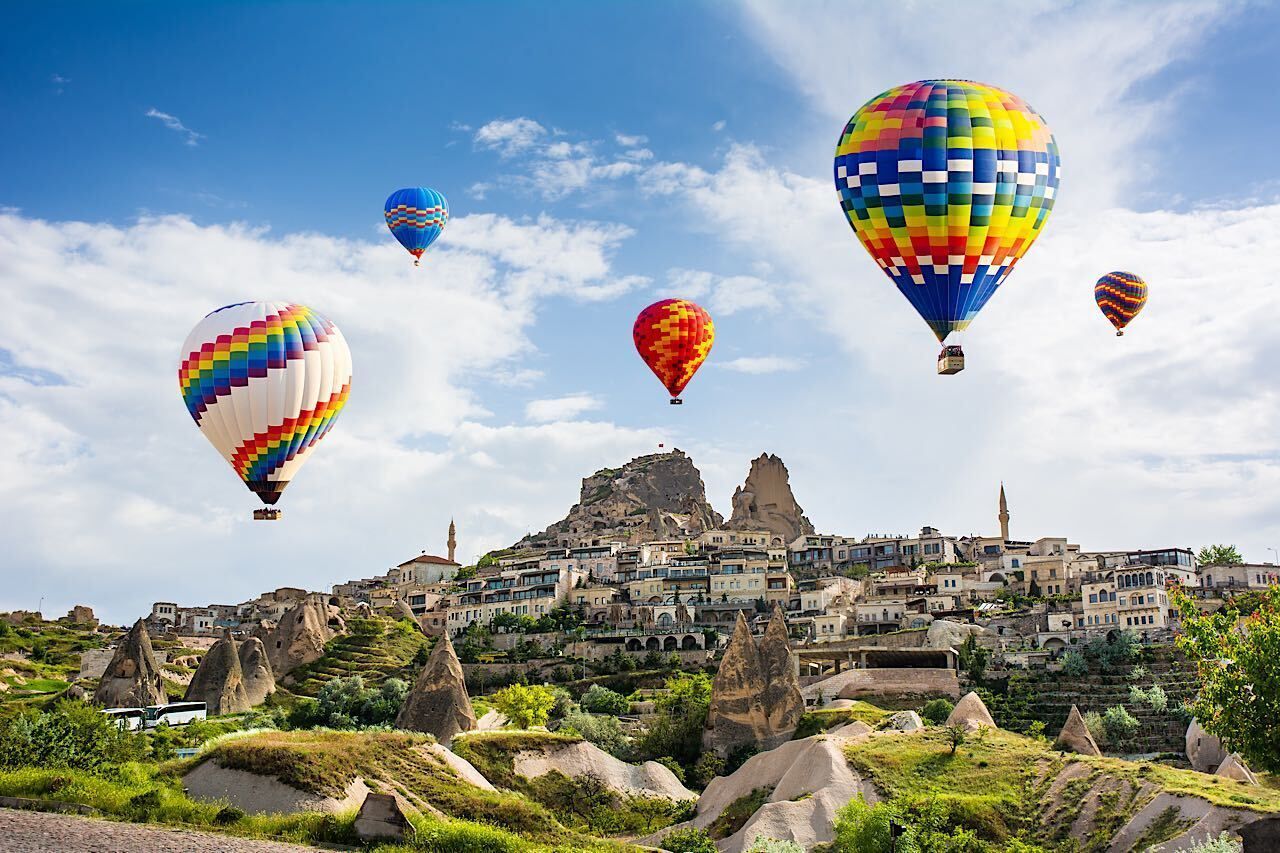 The views of the sun rising above fairy chimneys will make your 4:30 AM wake-up call worth it. Cappadocia is one of the most popular places in the world for hot-air ballooning (so be sure to book in advance). Some balloon operators are so skilled that, under the right conditions, they can bring you close enough to a tree to pluck an apricot before taking you back hundreds of feet in the air for sky-high views of what you visited yesterday.

Back in Göreme, walk up the hill to the Göreme Open Air Museum. You’ll need about two hours to admire its 10th- to 12th-century cave churches and their restored Byzantine frescoes. It’s best in the early mornings or late afternoons (summer closing time is 7:00 PM) to avoid the midday heat and crowds. The Nunnery has several stories to explore. The Dark Church requires an additional fee, which helps the preservation of its brightly-colored frescoes. The large 10th-century Tokalı Church and its underground frescoes are included in your ticket; it’s outside the museum zone about 160 feet down the hill toward town.

Before you depart Cappadocia, you should have time for a little shopping. You’ll find better prices here than in Istanbul’s Grand Bazaar; good-natured bartering is expected. Cappadocia was a trading crossroads on the Silk Road, and you’ll still find unusual items — even antiques — amongst the replicas and typical Turkish souvenirs.

If you’re seriously considering buying a carpet, accept the offer of tea (black or apple) and take a seat while you watch carpets whirled from their stacks onto the floor in front of you while the shopkeeper explains the virtues of each. You’ll need a few refills for the bargaining process. 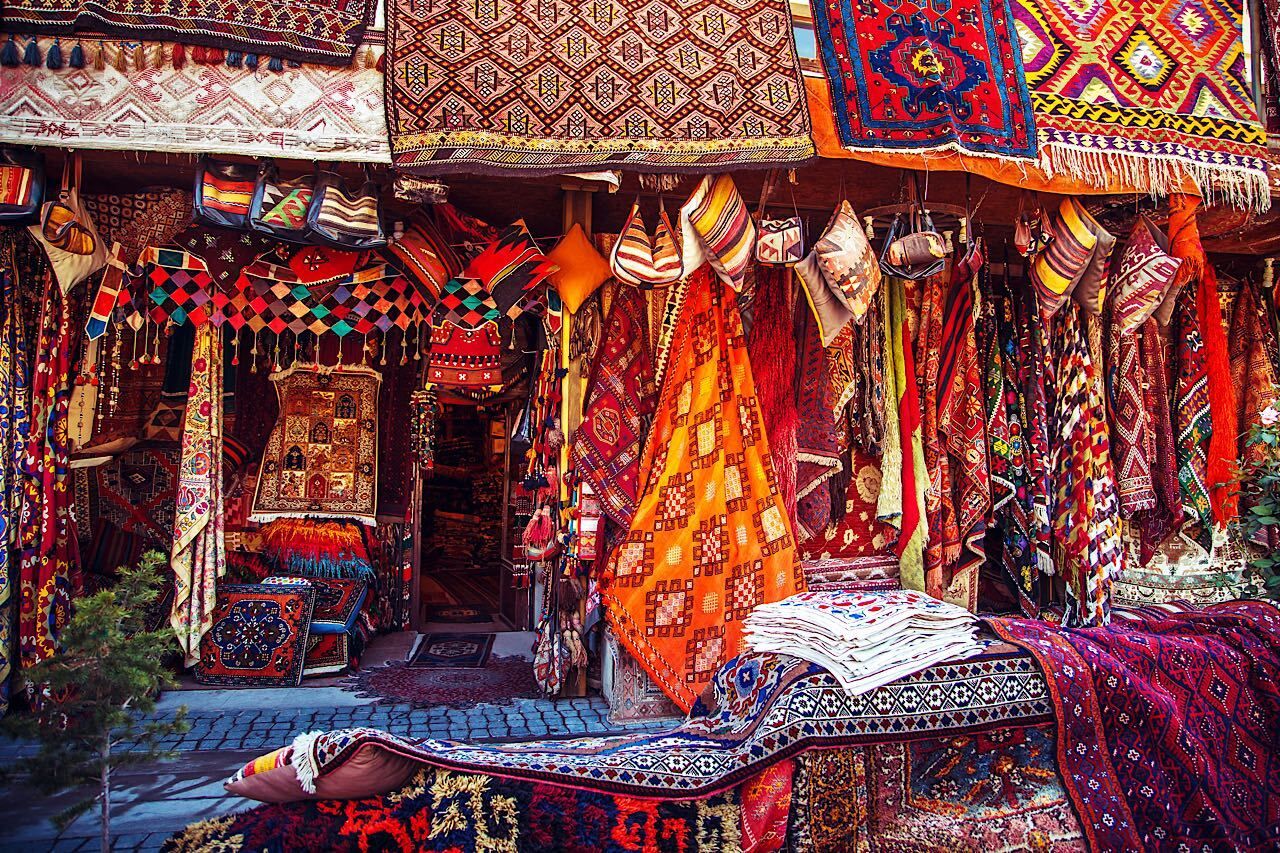 Look for thumb-sized stones with an animal carved at one end — they’re letter seals of the ancient Hittites who lived here around 1600 BCE. Other souvenir choices include red-clay pottery made in the Cappadocian town of Avanos, flat-woven kilim carpets, and Turkish lace. You’ll likely find a good deal on silver filigree jewellery. Beautiful, cheap knock-offs of intricately decorated tiles and plates are everywhere but might not actually be made in Turkey.

No visit to Turkey is complete without buying your own nazar boncuk. These blue glass pendants hang in every Turkish home, shop, car, plane, and hot-air balloon to bring good fortune. Perhaps it will bring you luck for a return visit to Cappadocia.

VegetarianEating Vegan in Turkey Is a Breeze. Here Are the 10 Best Foods To Try.
Tagged
Travel Turkey
What did you think of this story?
Meh
Good
Awesome

Eating Vegan in Turkey Is a Breeze. Here Are the 10 Best Foods To Try.