Crossing Central Asia overland is undoubtedly faster and less eventful today than it was for sixth-century merchants looking to exchange weapons for spices, but if you’re planning to set out for a transcontinental journey of this kind, it will nevertheless be epic. With modern(ish) methods of transportation available and a relatively calm situation in most countries along the way, traveling the 5,000-mile route connecting east and west is mostly a matter of patience.

What is the Silk Road? 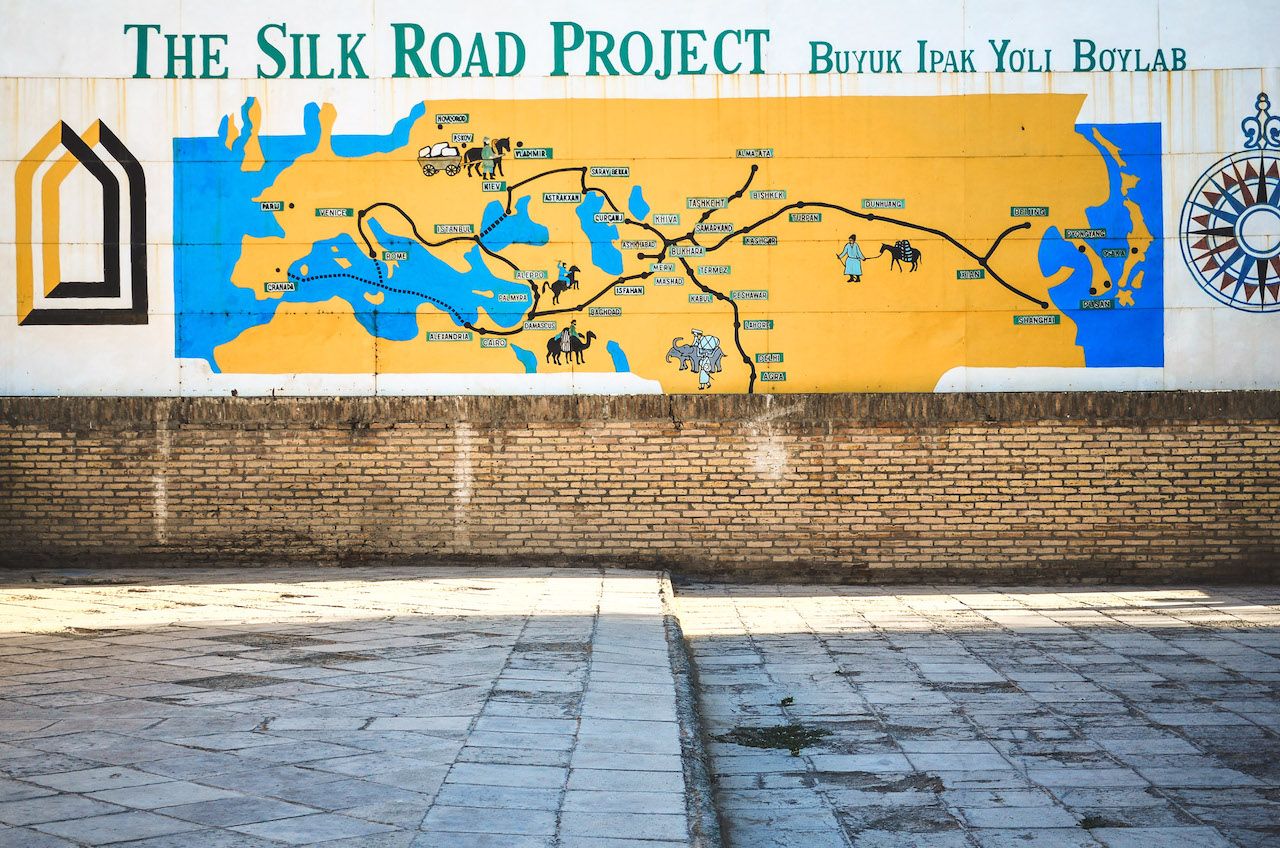 If we were to interpret the term literally, the legendary Silk Road should be traversed in only one direction, east to west. Silk originated in China and traveled for months through Central Asia in order to reach Roman hands in Europe, where the natural fabric was considered the ultimate luxury. However, the term “Silk Road” refers to something much larger than the mere exchange of textiles.

Once the Hexi Corridor opened up between Xi’an and Central Asia (around 130 BCE), expanding the trade routes already in place toward the East, merchants began exchanging not only textiles, but spices, tea, precious stones, medicine, weapons, silver, honey, animals, and even slaves at the oases and caravanserais along the route.

While commercial trading fueled the traffic, creating branches that spread out all the way to India, Southeast Asia, and Africa, the network of roads has been particularly valuable for its contribution to the development of modern cultures. Buddhism, for example, was diffused outside of India thanks to these connections.

What we call the Silk Road is, therefore, not a single trackway linking two points on a map, but rather a criss-crossing of routes and paths of trade routes developed over centuries where people flowed and with them, goods, cultures, technologies, and religions.

Dealings on the Silk Road remained active until the late Middle Ages (1453). The discovery of sea routes caused the ultimate decline of land transport and many cities that had gained wealth due to their strategic position lost their fortunes.

Traveling along the Silk Road today

My personal journey along the Silk Road took me all the way from eastern China to Italy through Kyrgyzstan, Uzbekistan, Iran, Turkey, and Greece. After risking an arrest on the border of Turkmenistan because of them not being able to provide me with the much-needed transit visa on time, I had to skip the country with a last-minute flight. The trip, however, is easily doable overland, given that your organizational skills are top-notch. 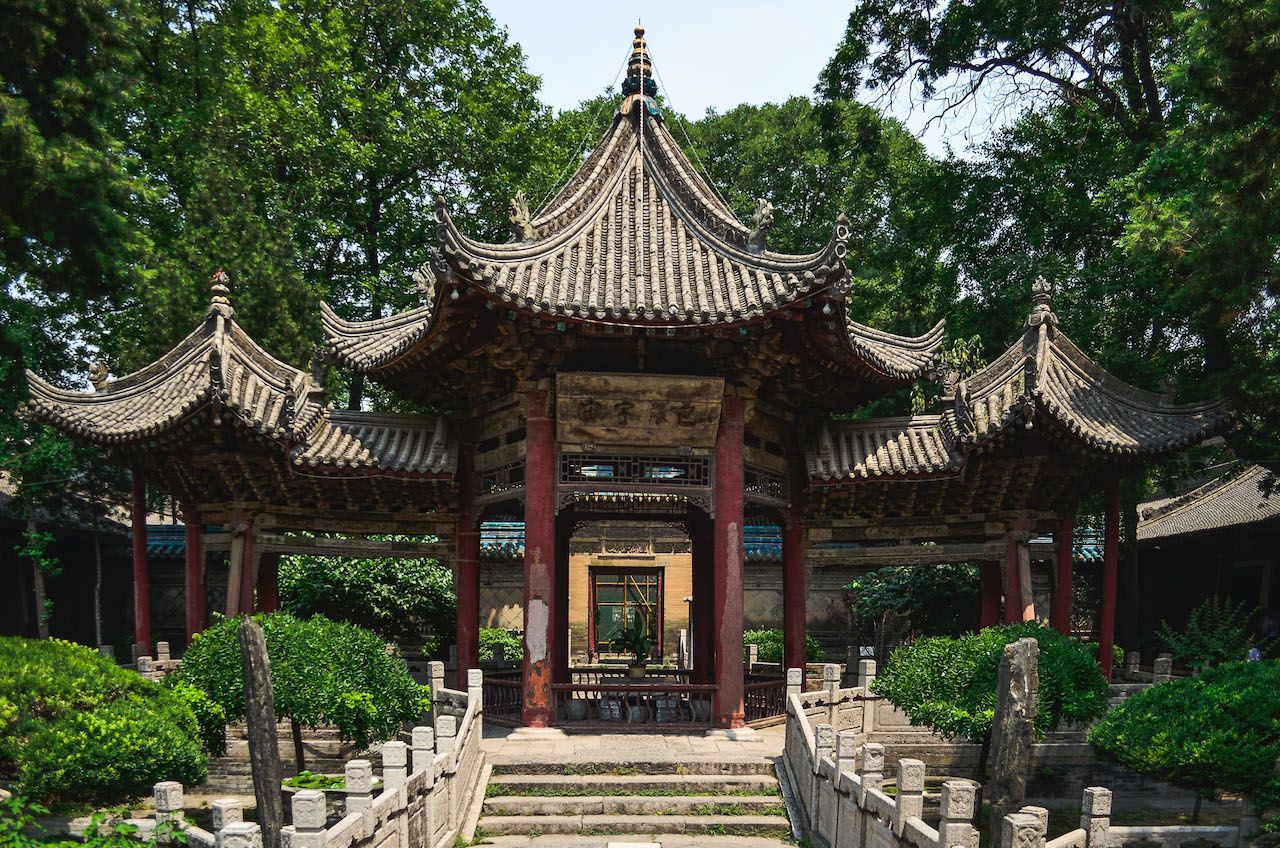 Generally speaking, the entry point to the Silk Road is Xi’an, in China’s Shaanxi province, while the final stop is in Istanbul, Turkey, at the doorstep of Europe. But there are no strict rules; between the two cities, the itineraries vary and you can explore in any direction you wish. While I decided to head south from Uzbekistan and traverse the Middle East, it is also possible to exit China or Uzbekistan via Kazakhstan and cross the Caspian Sea into the Caucasus. From these two main routes, an almost infinite number of potential detours await. 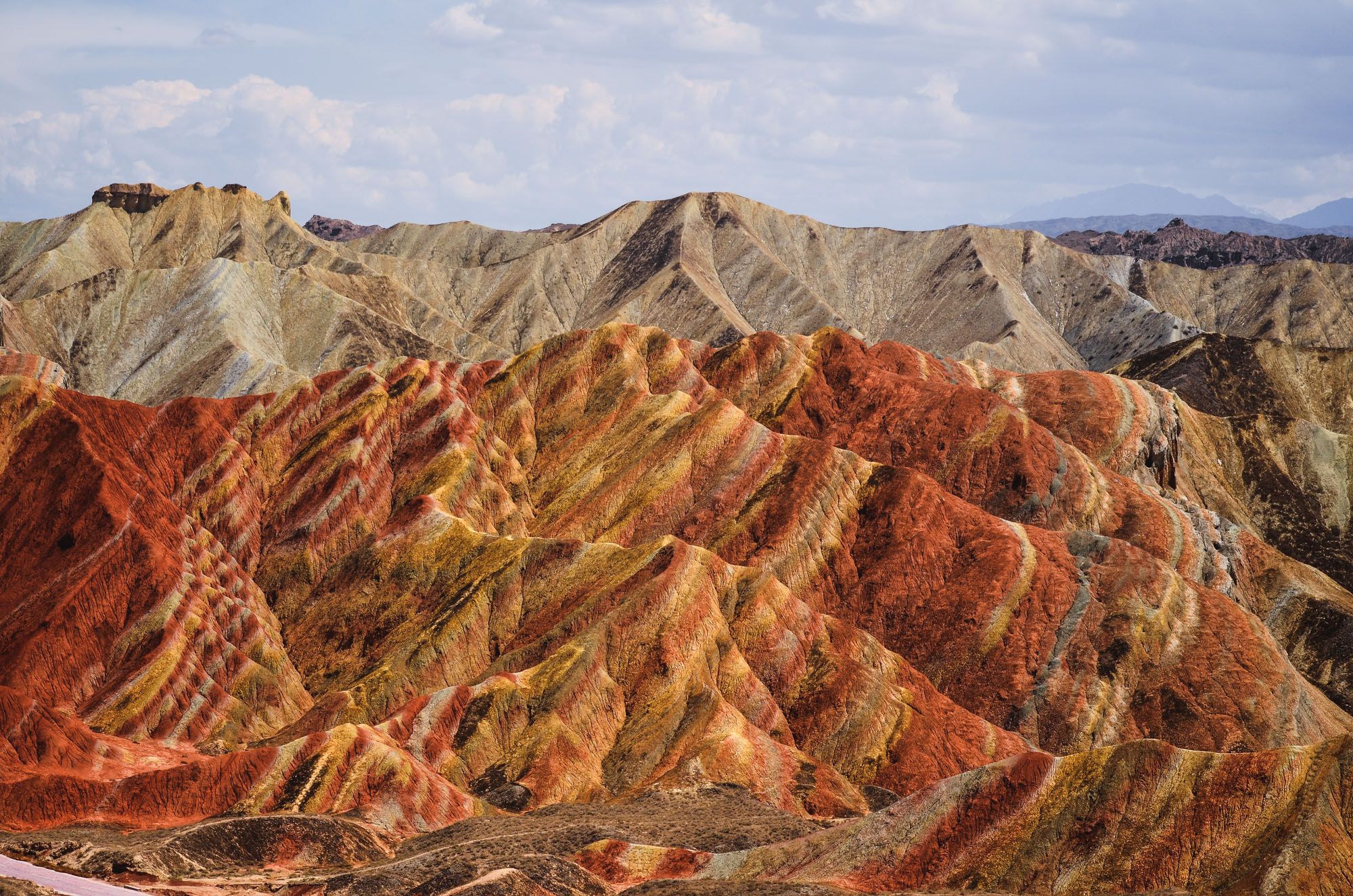 After a brief stopover in the town of Zhangye, located along the Hexi Corridor and famous for its rainbow-striped rock formations, I recommend that you proceed to the capital city of Ürümqi in the autonomous region of Xianjiang. Western China is perhaps the least stable area along the Silk Road, because of the long conflict between the central government and the local Uyghur population, which still causes bombings and armed attacks from time to time. 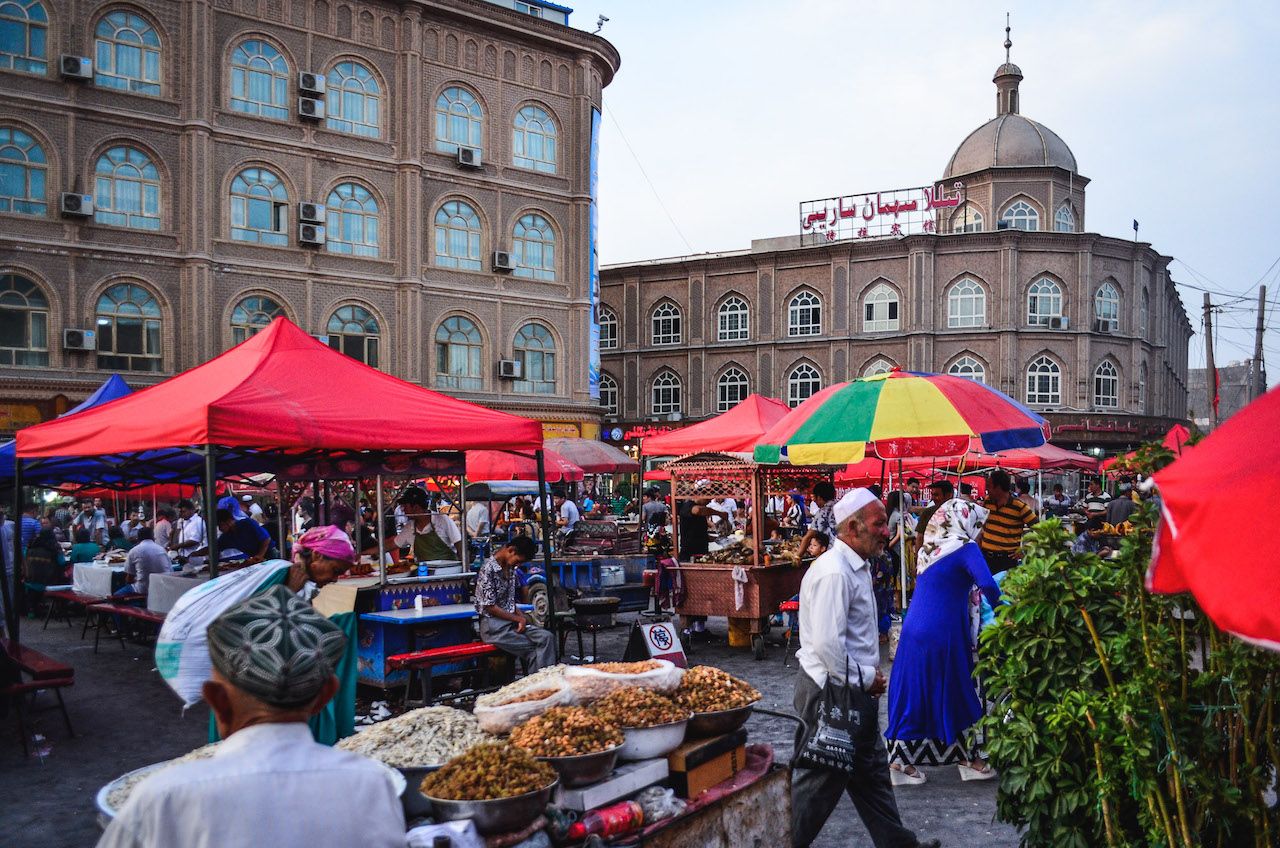 Another night on the train takes you to the last of the Chinese cities before Central Asia: Kashgar. A mosque establishes the city center and sand-colored buildings surround the market in which mutton stew has replaced steamed dumplings. The male inhabitants wear square hats and have long beards while most of the women don thick veils. Kashgar is as Chinese as Beijing on the map, but in reality, the two cities and their people could not be any more different.

From Kashgar, in a matter of hours, you can be in Pakistan, Afghanistan, Kyrgyzstan, Kazakhstan, and, a little further, India. A central node in the Silk Road, this city has always seen the intersection between civilizations and is still a vibrant cultural nest today. 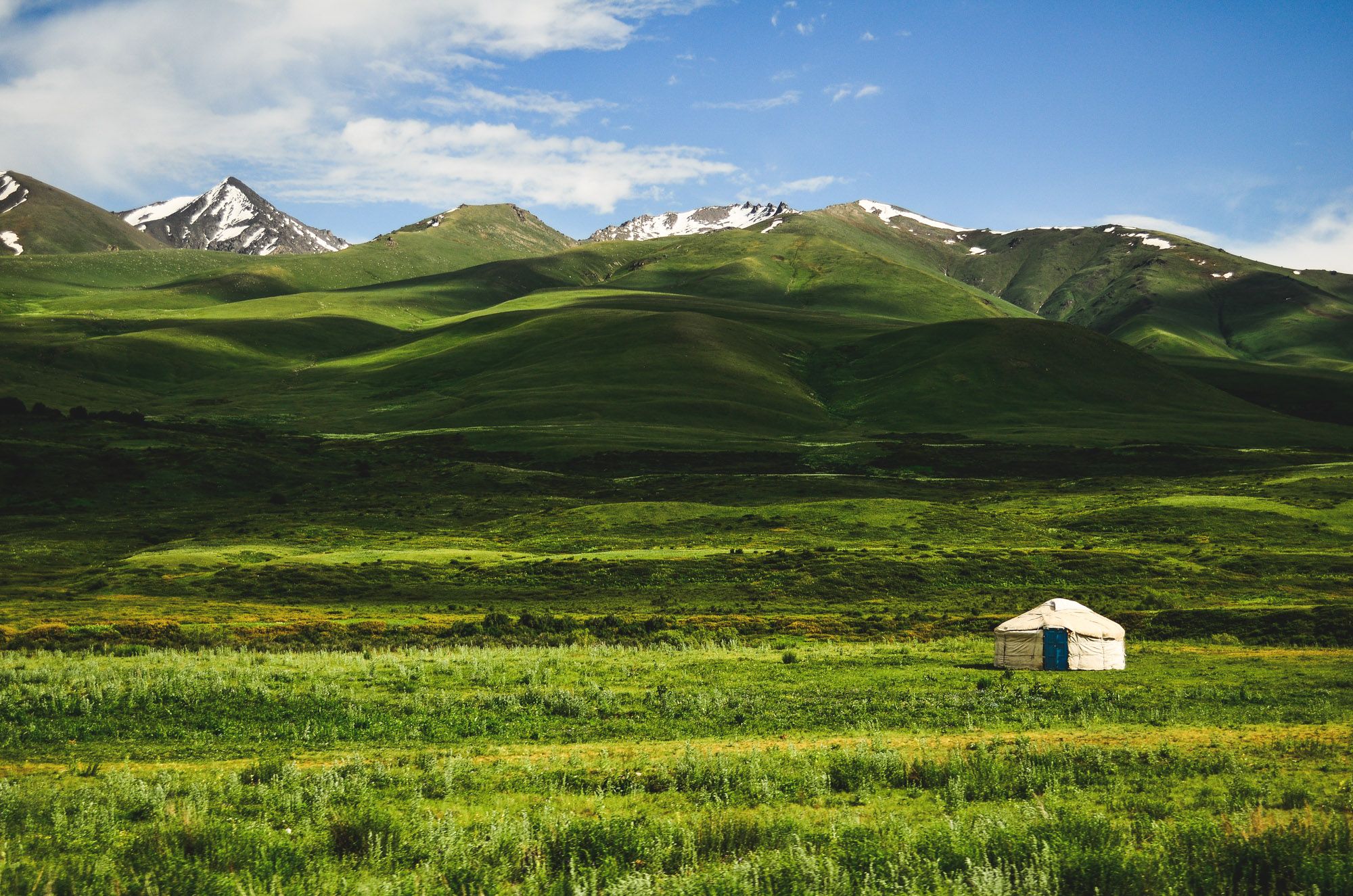 A bus ride over spectacular mountain passes leads to Kyrgyzstan, a country of natural wonders that blends nomadic tradition and Soviet history with pristine landscapes. From Osh, the second largest city, you can access Uzbekistan in no time, but it is worth considering a diversion north, to Issyk-Kul Lake and the Tien Shan Mountains. The many jailoos (summer pastures) dotted by yurts set up by nomads in altitude areas are worth the circuitous route.

The Karakol region and the area surrounding Song-Kul Lake are two of the best if you want to make use of the hiking boots you’ve been carrying in your backpack. Signage is lacking, maps are hard to find, and trails are barely visible, but that’s what keeps the place unspoiled. 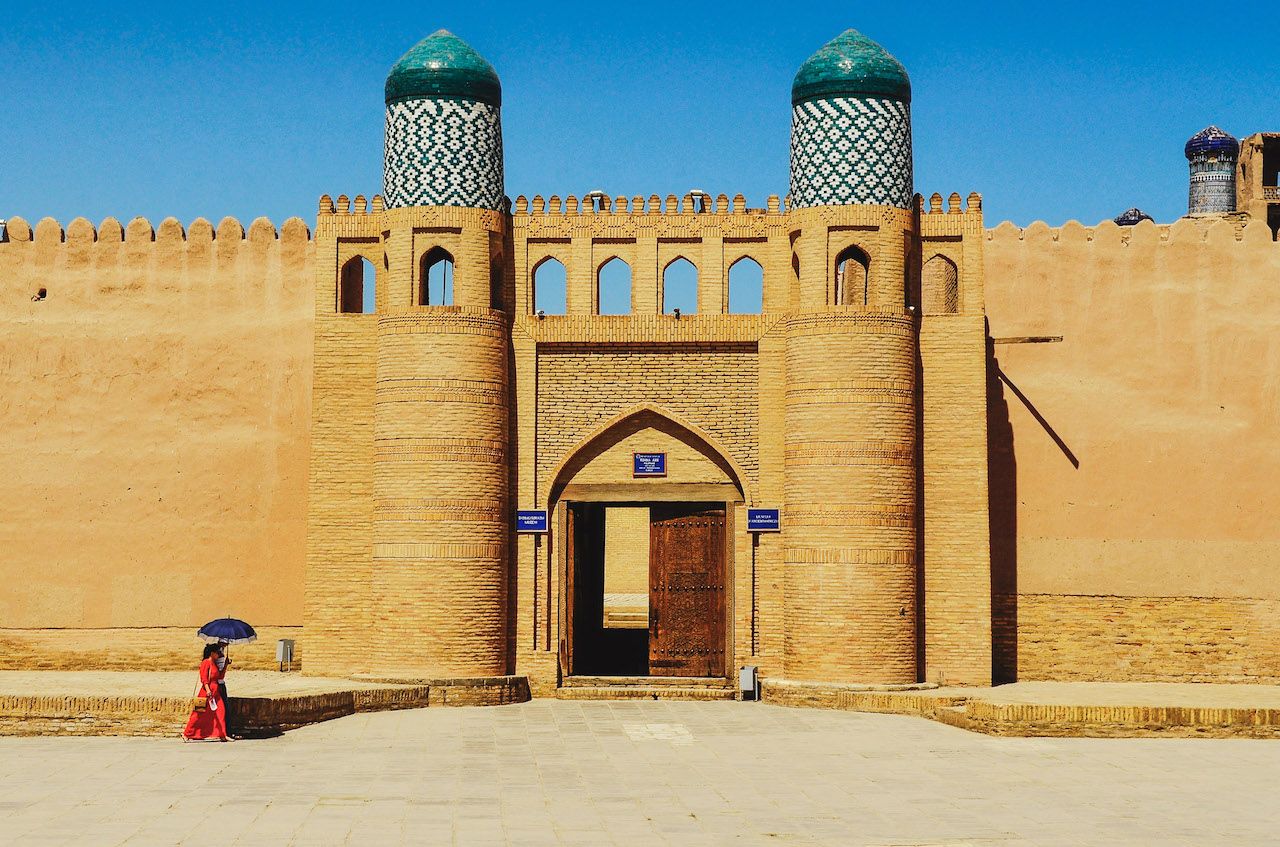 Since President Shavkat Mirziyoyev replaced his authoritarian predecessor in 2016, Uzbekistan — a formerly closed off country — has opened up toward foreign tourism. Applying for a visa and getting it today is a much smoother process than in the past and this is definitely a situation to be taken advantage of. Uzbekistan is full of amazing sights, including intriguing examples of Islamic architecture, restored to their former glory by the Soviets who despised religion but understood the value of these man-made treasures. Some of the most important centers of the Silk Road are here — starting from Samarkand, a city of turquoise domes founded in the seventh century BCE, to walled fortress of Khiva. 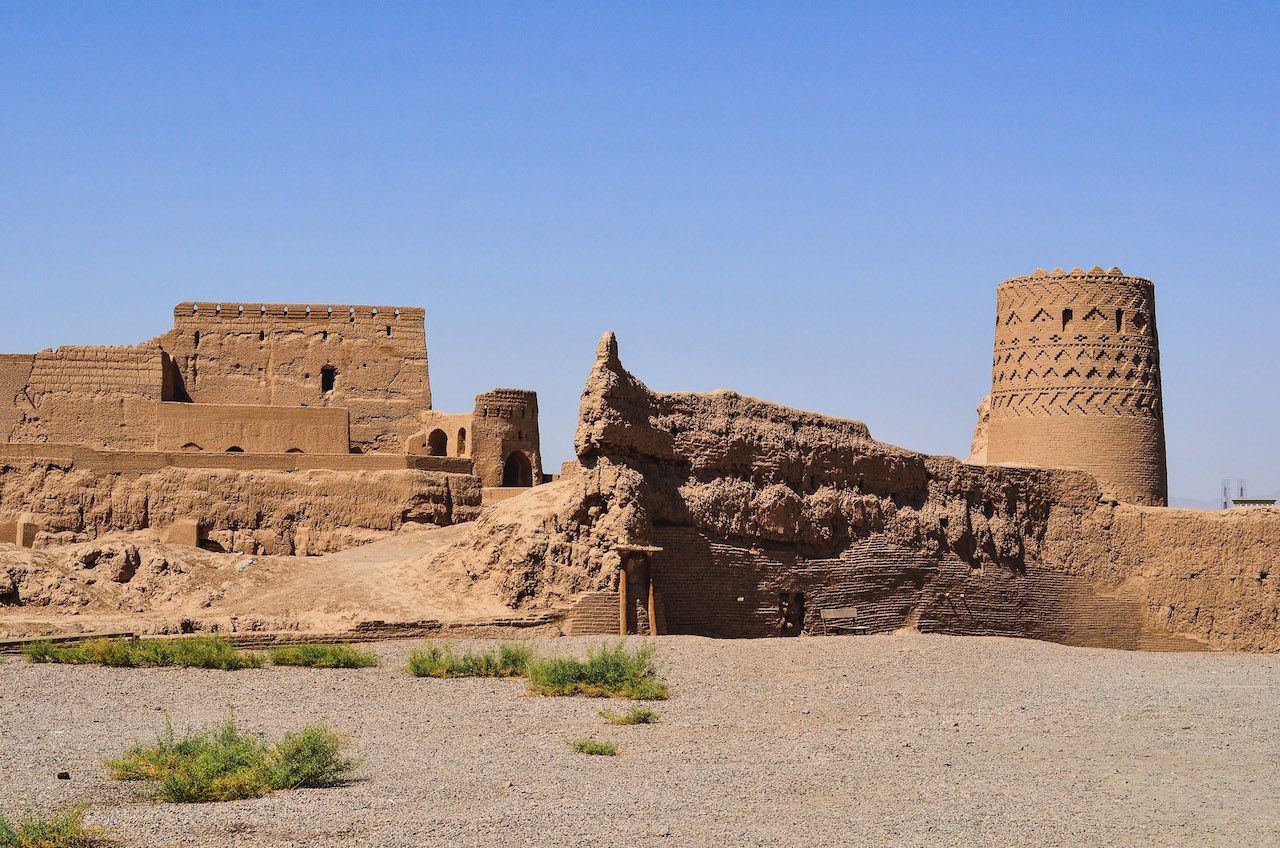 The newly-acquired openness has not extended to Turkmenistan, which allows visitors only a short transit visa (tourist visas involve getting a letter of invitation from the person that you are visiting or permission from a tourist agency with whom you need to book an expensive and guided tour). That said, the country is small and mostly empty, so the five-day permit to cross into Iran is usually more than enough for a short visit. The old Persia, on the other hand, will welcome you with its disarming hospitality and some of the most stunning historical sites on the whole route. After visiting millennia-old castles, restored caravanserais, and remnants of the Zoroastrian tradition, you’ll reach the city of Tabriz, another key node on the Silk Road with its UNESCO-listed brick-covered bazaar, a complex that has seen people from East and West exchanging goods for centuries. From there, it’s smooth sailing all the way to the western tip of Turkey. 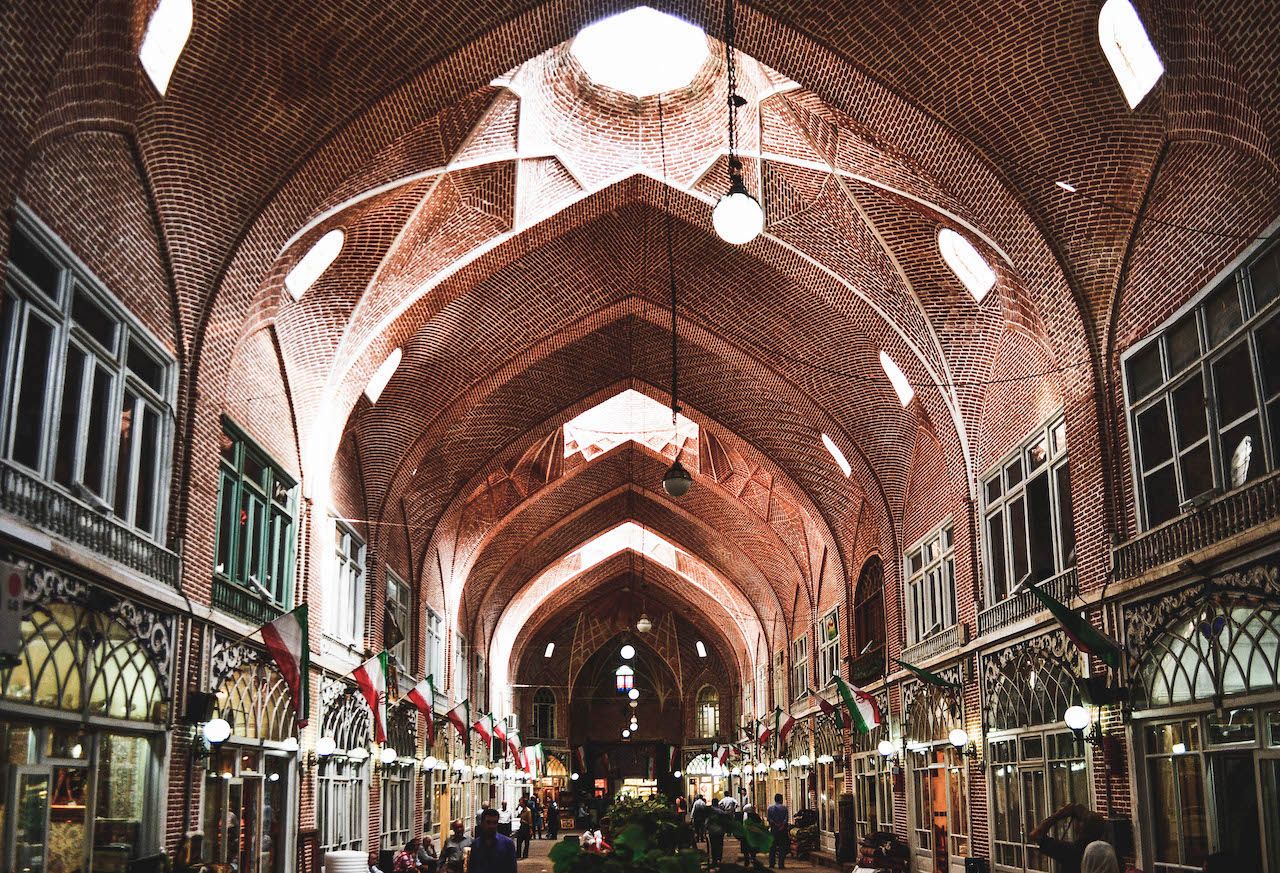 Some alternatives exist to the itinerary just described. From the city of Aktau in western Kazakhstan, ferries depart toward Baku, Azerbaijan. From Baku it is necessary, however, to go the long way via Georgia, as both the borders between Azerbaijan and Armenia, and between Armenia and Turkey are closed at the time of writing. For those able to obtain a Russian visa, it is also possible to travel around the Caspian Sea and into the North Caucasus. 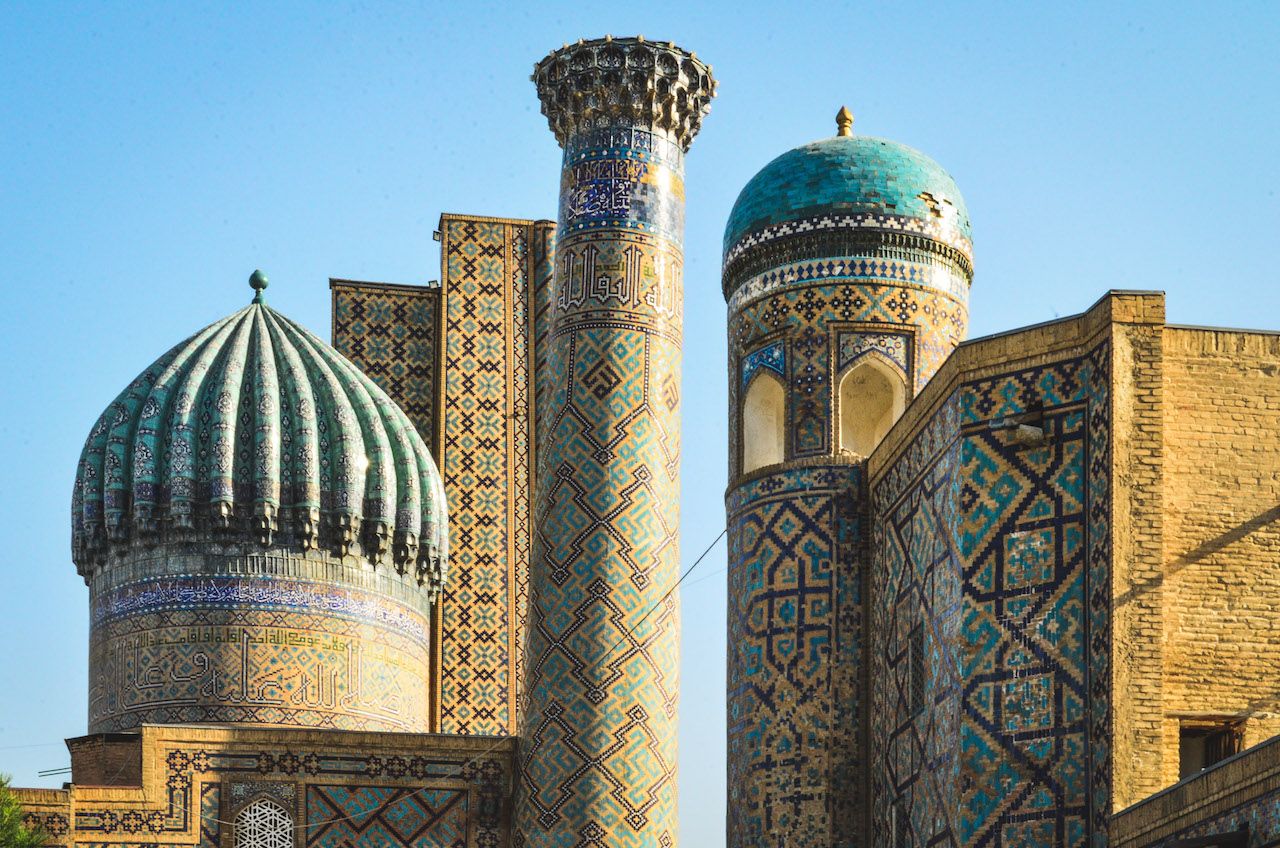 Traveling the Silk Road is not another Southeast Asian Banana Pancake Trail — although there are backpackers exploring this corner of the world, you won’t encounter full-moon parties with flaming jump ropes and cheap cocktail buckets. Let’s be grateful for that. 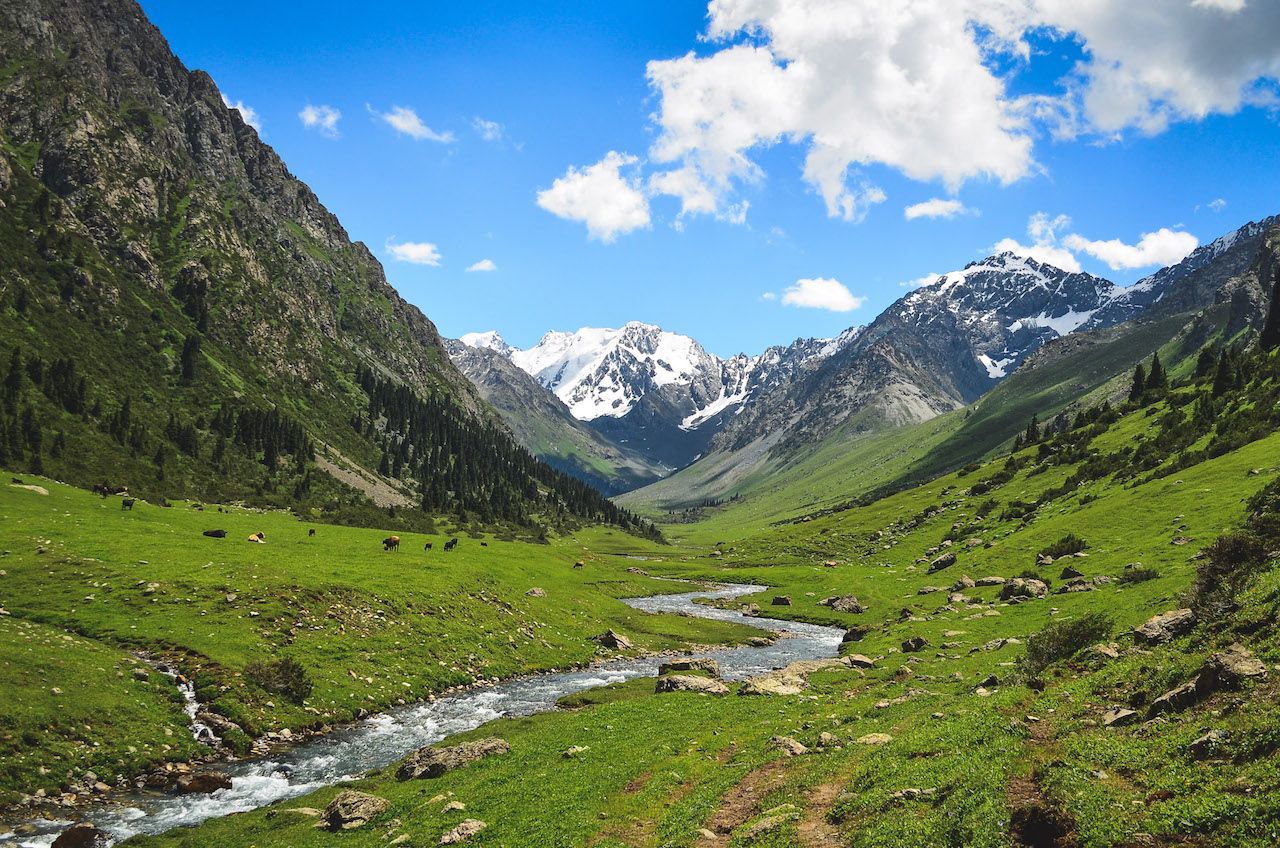 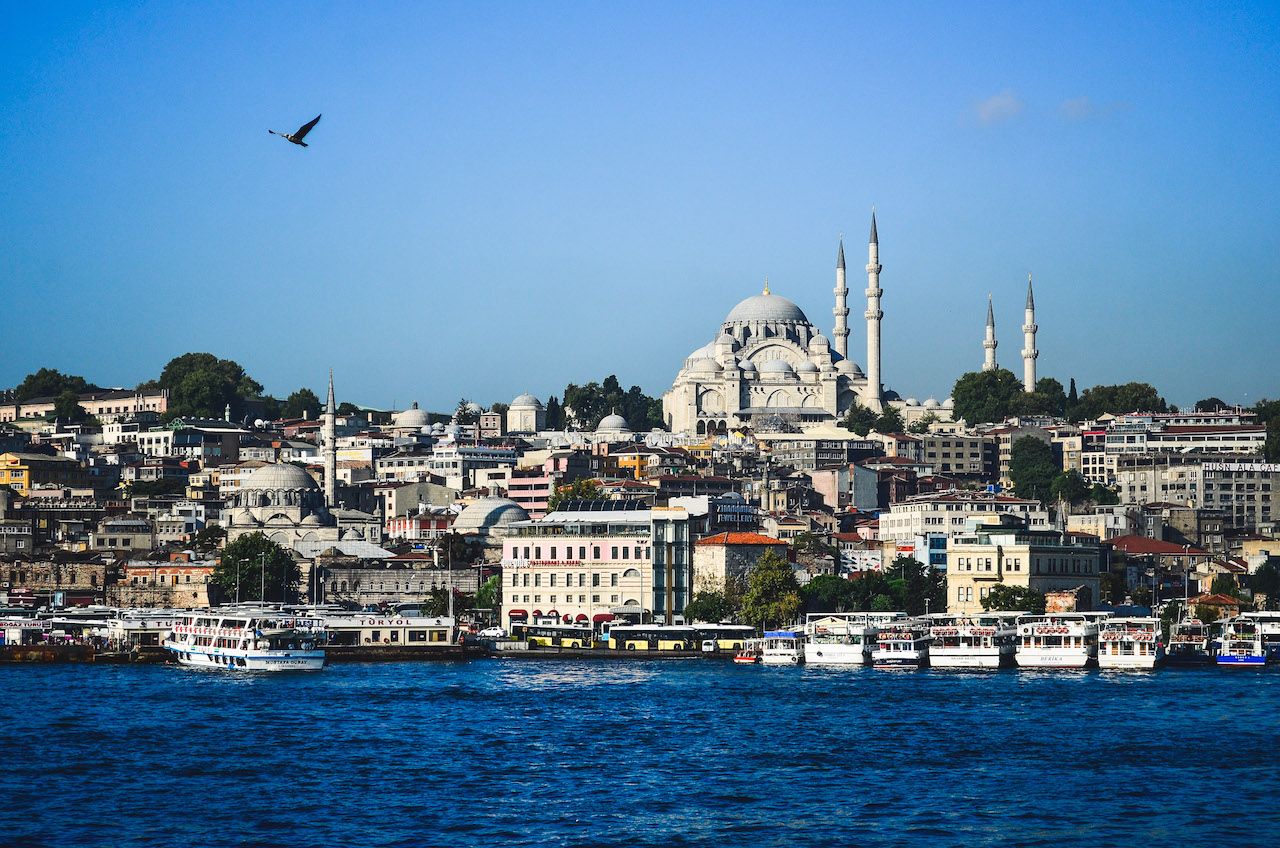 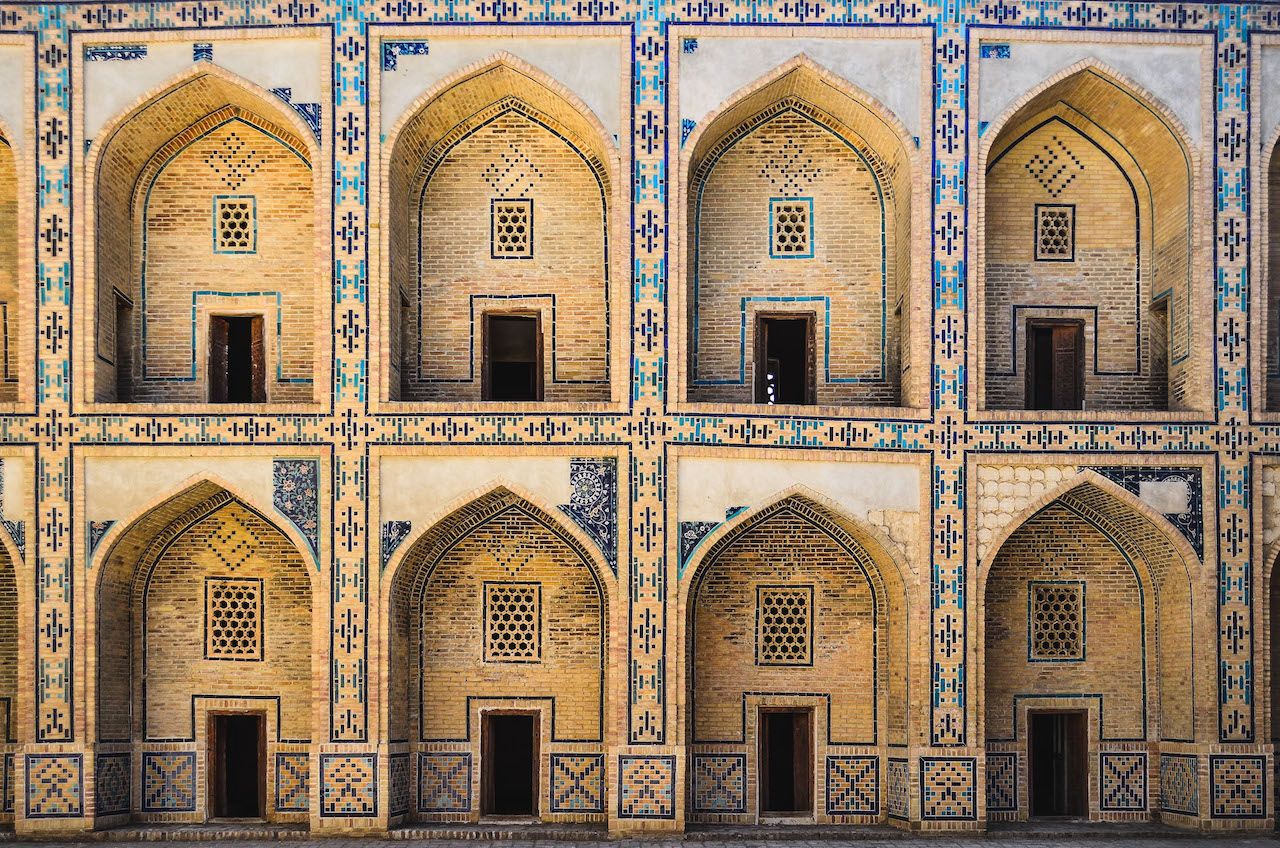 TravelTraveling Overland From the Very Top of Russia To the Bottom of Iran
Tagged
Culture Insider Guides
What did you think of this story?
Meh
Good
Awesome