Based on what you hear on the news and read on your government’s travel advisory, you might not be too inclined to put Iran on the top of your “future holiday destinations” list. But we urge you to think twice about passing the nation over. With a rich cultural heritage dating back thousands of years, a striking geography varying from the snow-capped peaks in the northern provinces to the lush desert oases of the south, and a population eager to change your preconceptions with its disarming hospitality, Iran is well worth a visit. If you’re on the fence about checking out Iran, these remarkable sights are sure to convince you to give it a try. 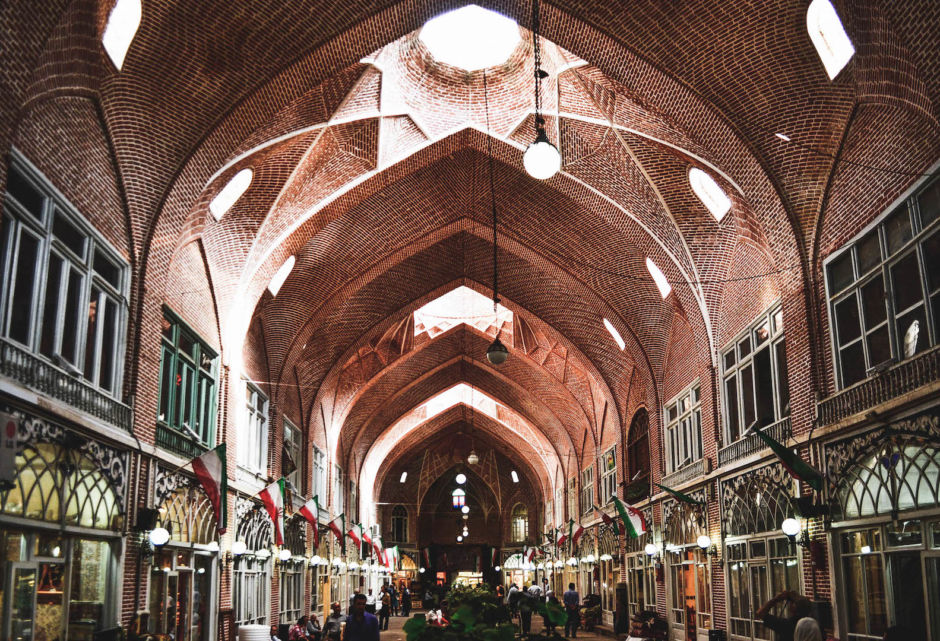 The Historic Bazaar of Tabriz

The network of galleries that forms the Tabriz Bazaar Complex earned its UNESCO World Heritage Site title in 2010, thanks to both its historical importance as a cultural and commercial hub and its majestic, one-of-a-kind structure. The largest covered bazaar in the world, built almost entirely in red brick and covering an area of nearly 72 acres, is located at the continental crossroads of Europe and Asia and has played a crucial role in the development of the east-west trade routes. You’ll get lost among hundreds of shops as you walk under the grandiose timches, the domed arcades that host craftsmen keeping alive the carpet-making tradition, gold vendors, and spice traders. 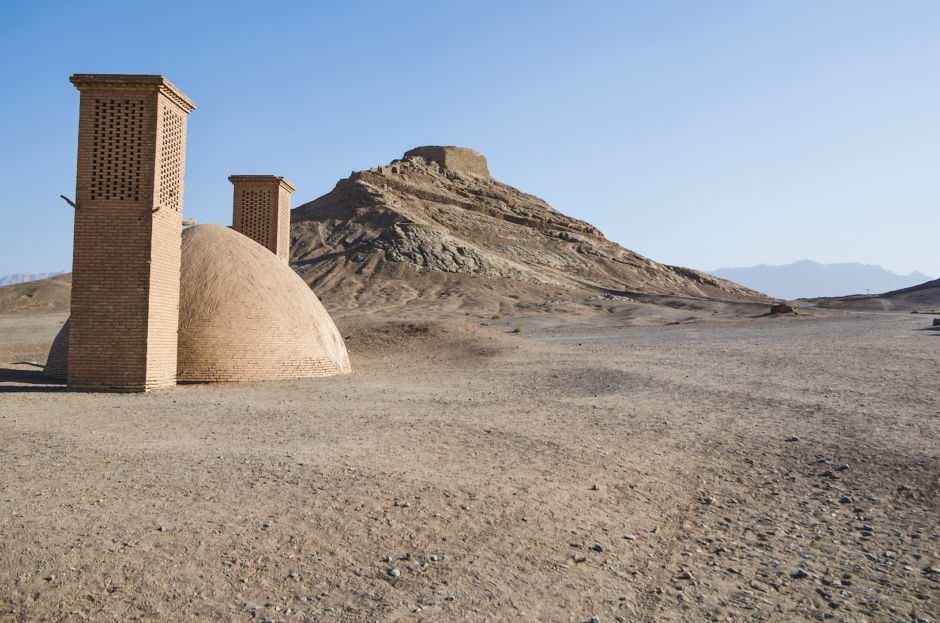 Iran was, until the fall of the Sasanian Empire in 651 AD, the cradle of Zoroastrianism, one of the world’s oldest monotheistic religions. Remains of ceremonial constructions can still be found today, particularly in the area surrounding the city of Yazd. The dakhmas, also known as towers of silence, represent one of the most intriguing traces of the Zoroastrian tradition and are located just 20 minutes south of the old town.The purpose of these circular structures built on a dry, flat plain was to prevent the bodies of the deceased from being infected by evil forces and losing their purity. Zoroastrians believed that, from the moment of passing, a person was vulnerable to demonic infection, an event avoidable only through the process of excarnation. Dead bodies were transported on top of the towers to be devoured by vultures and freed from the danger of damnation. The guardians of the towers would then collect the bones and place them in ossuaries situated below the towers. Ritual exposure was prohibited by law in the 1970s. 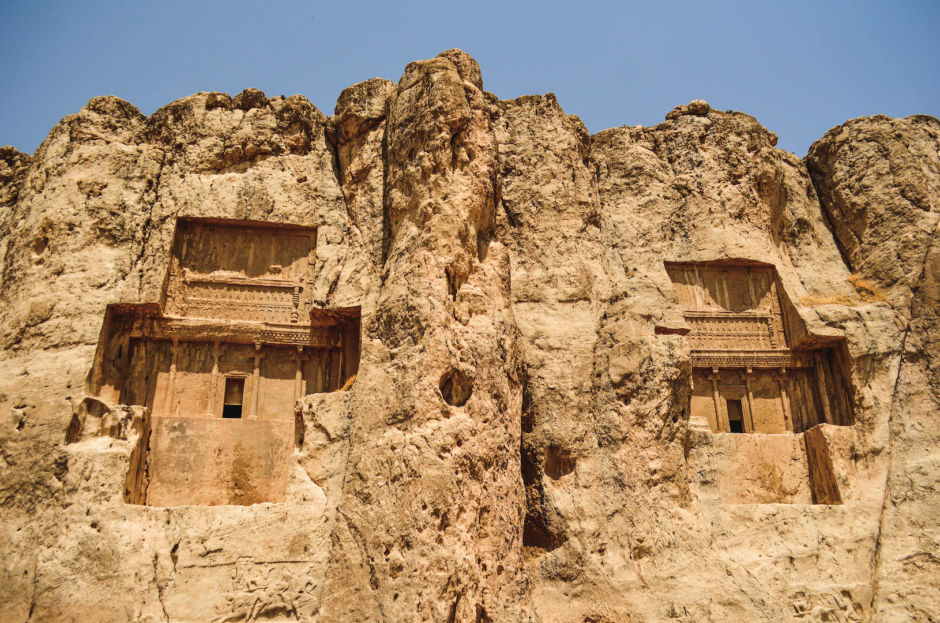 A long drive from Yazd to Shiraz will take you to the necropolis of Nasqsh-e Rostam, a complex of four imposing tombs sculpted directly into the face of a cliff. Close to Persepolis, Nasqsh-e Rostam contains the sarcophaguses of Achaemenid kings Darius I, Xerxes I, Artaxerxes I, and Darius II, dating to the fourth and fifth centuries BCE and preserved behind the engraved Persian crosses decorated with commemorative reliefs. Together with Sasanid-era Naqsh-e Rajab, another archaeological site of equal importance situated less than two miles away, Nasqsh-e Rostam is on UNESCO’s tentative list for World Heritage nomination. 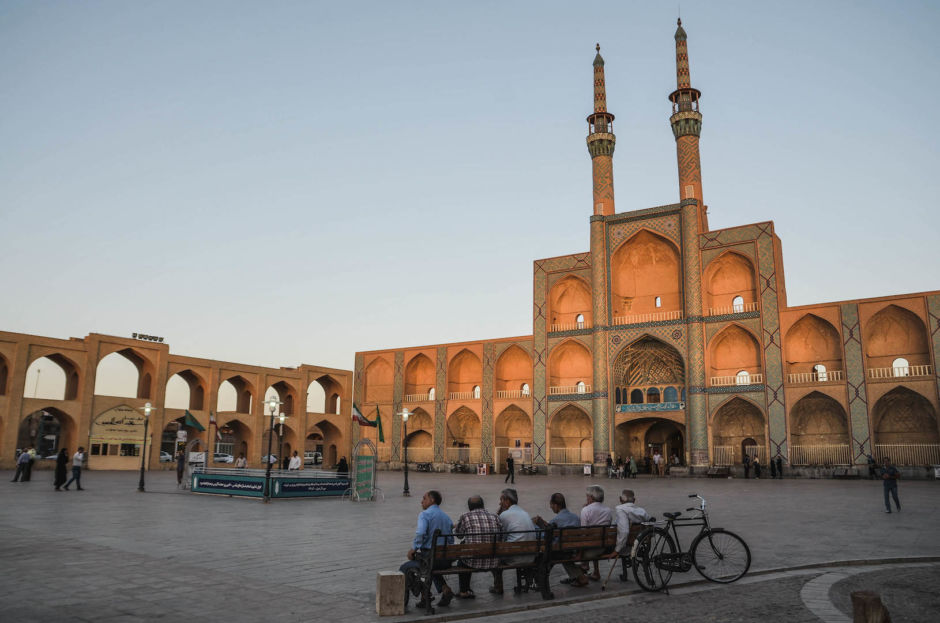 Originally built at the beginning of the 15th century and restored multiple times over the course of its life, this marvelous three-story façade marks the heart of Yazd’s UNESCO-protected old town. The symmetrical layout is characterized by the sunken alcoves, which can be admired from any of the many restaurants and cafés located in the pedestrian square, the perfect place to stop for tea and nabot (rock candy) before getting lost once again among the many treasures of the covered bazaar. 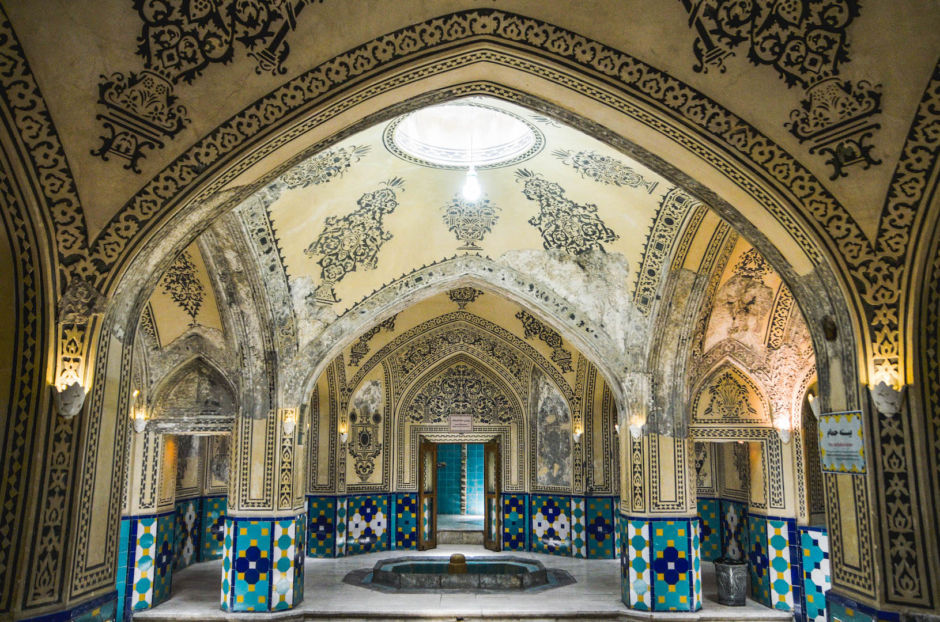 As a result of a devastating earthquake in December 1778, the city of Kashan, located just two hours south of Tehran, lost a great number of its architectural masterpieces. During the reconstruction, wealthy citizens, with the help of some of the most famous local architects, built the houses that have now become one of the main attractions in Kashan, open for visitors wishing to imagine the lavish lifestyle of the past’s rich elite.The Historical Houses are concentrated on the eastern side of the old town, steps away from the Agha Bozorg Mosque, and while some have been converted into hotels, the most impressive ones work as open-air museums. A combination ticket allows access to three structures; among these, make sure you visit the incredible Sultan Amir Ahmad Bathhouse, a Safavid-era traditional spa restored to its former glory after the earthquake. The octagonal bathing hall at the center of the building is surrounded by magnificent archways decorated with gold and light-blue mosaics while the rooftop awaits with its collection of sand-colored domes from which you can observe the city. 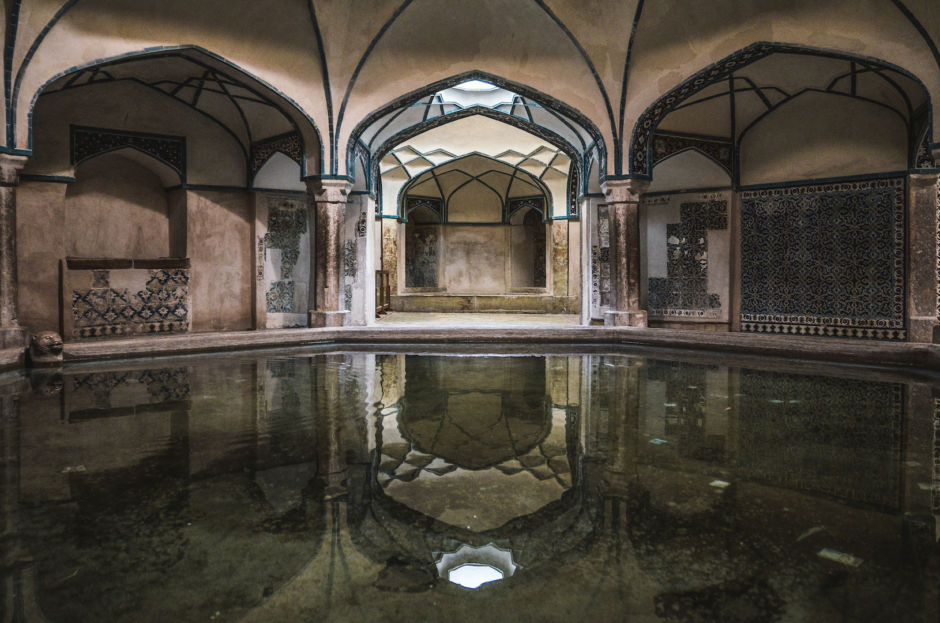 A caravanserai, a mosque, and a labyrinthine bazaar: the Ganjali Khan Complex, the centerpiece of the southeastern city of Kerman, is astounding. The complex encircles a large square where there are lush gardens and a fountain. Copper, textile, and spice vendors populate the arcades, trying to attract the attention of passersby while a traditional water cistern known as ab anbar peaks out among the low rooftops with its wind-catching tower.One of the bazaar's galleries provides access to the Ganjali Khan Bathhouse, an architectural masterpiece made of domes, arches, and pools decorated with intricate tile work and paintings where 17th-century nobility could escape the outside heat. Transformed into an anthropological museum in the 1970s, the bathhouse now hosts a collection of statues representing real-life scenes from the past. 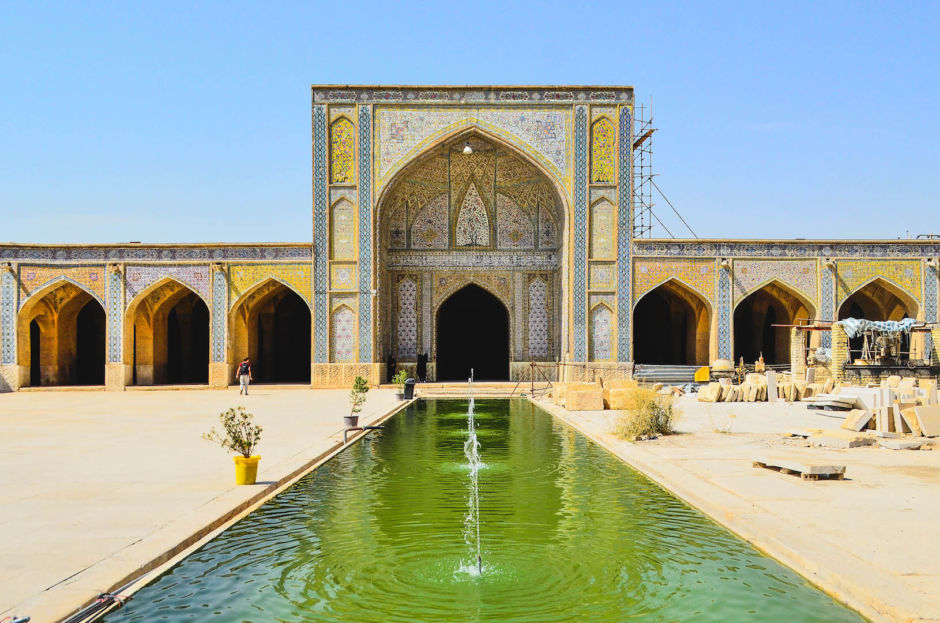 Hidden behind the vast Vakil bazaar in the heart of old Shiraz, the Vakil Mosque is covered in magnificent tile work, reflected in the narrow central pool. Completed between 1971 and 1973, the Vakil Mosque is composed of 48 individually carved monolithic columns, incredibly detailed mosaics on the vaulted ceilings, and a minbar - the pulpit from where the Imams deliver their sermons - sculpted into a single block of green marble. 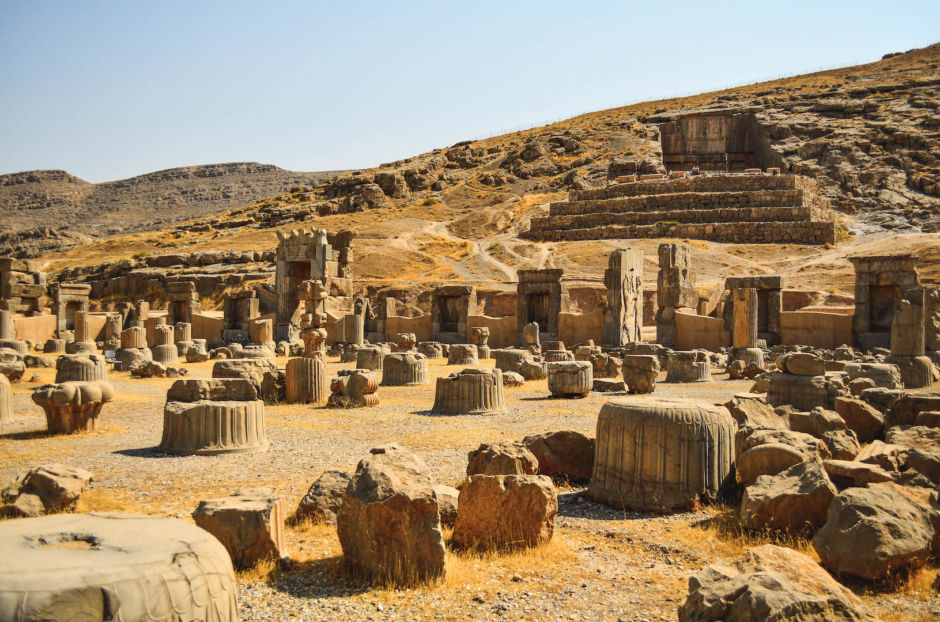 Persepolis, founded in 518 BCE, was the capital of the Achaemenid Empire, and its ruins are some the greatest architectural testimonies of early civilization. The “City of the Persians” is composed of 32 acres of terraces, palatial buildings, rock reliefs, and staircases and was awarded the title of World Heritage Site by UNESCO in 1979.The name of Alexander the Great is still met with a grimace by many of the locals, and although Persepolis remained the capital of Persia after the fall of the Achaemenid Empire, the attacks by the Macedonian conqueror caused its rapid decline. Luckily, the burning of Persepolis was only partial, and many of the authentic structures and artworks remain intact today. Persepolis can be visited as a day trip from Shiraz in combination with the necropolis of Nasqsh-e Rostam, only a few miles away. 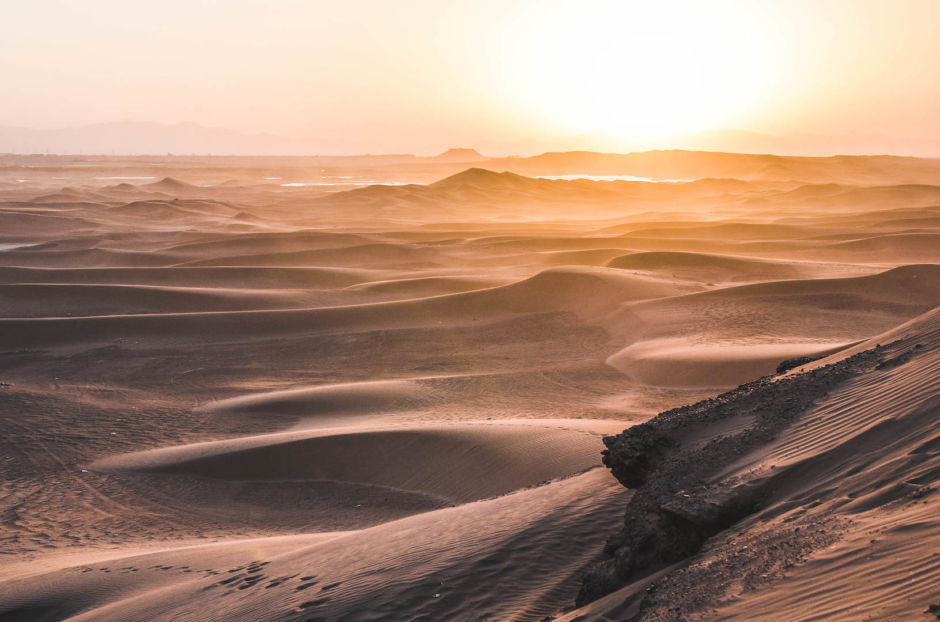 The Bafgh desert is one of the most accessible desert areas spread throughout the southern provinces, located less than an hour away from Yazd and reachable by car via a relatively well-maintained road. At the edge of the desert, a small group of cabins is available for those who want to spend the night, but for the more adventurous, hiking out and setting up camp between the dunes - wind permitting - is also possible. Travelers short on time often combine a visit to the Towers of Silence with a sunset trek in Bafgh Desert. Just ask your guesthouse to recommend a driver. 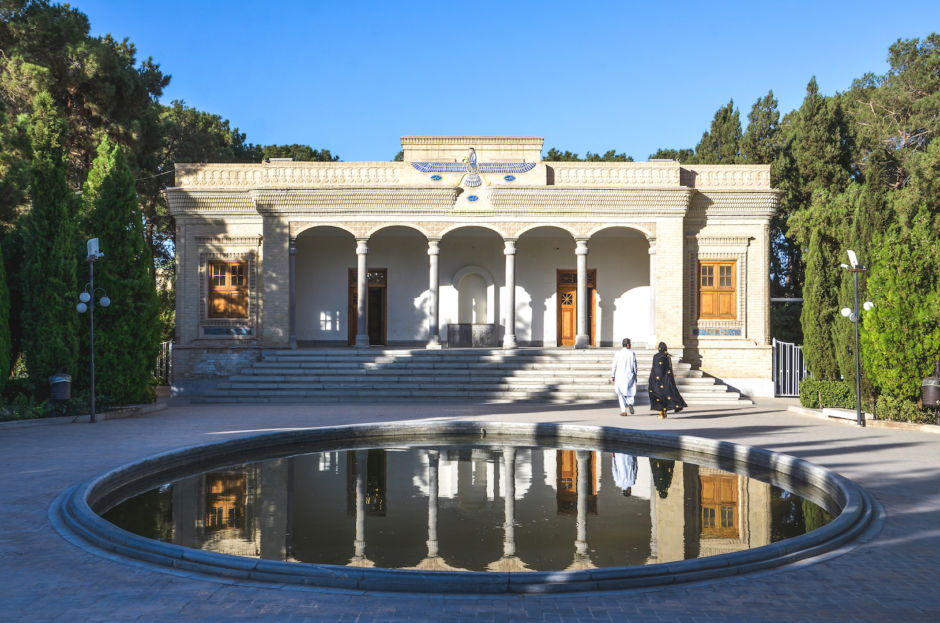 The Zoroastrian Temple of Yazd is very different from any other religious structure you'll see around Iran. Although the temple is dedicated to one of the oldest existing creeds, this building located south of Yazd’s old town was built recently, in 1934, to protect one of the nine Atash Behrams, the holy fires venerated by Zoroastrians. The sacred flame found inside the temple is said to have been burning since 470 AD, and it's the only holy fire present in Iran (the rest being in India). Open to non-Zoroastrian visitors since 1960, the Fire Temple of Yazd now includes a museum where a photo exhibition explores the history and traditions of Zoroastrianism in the country. 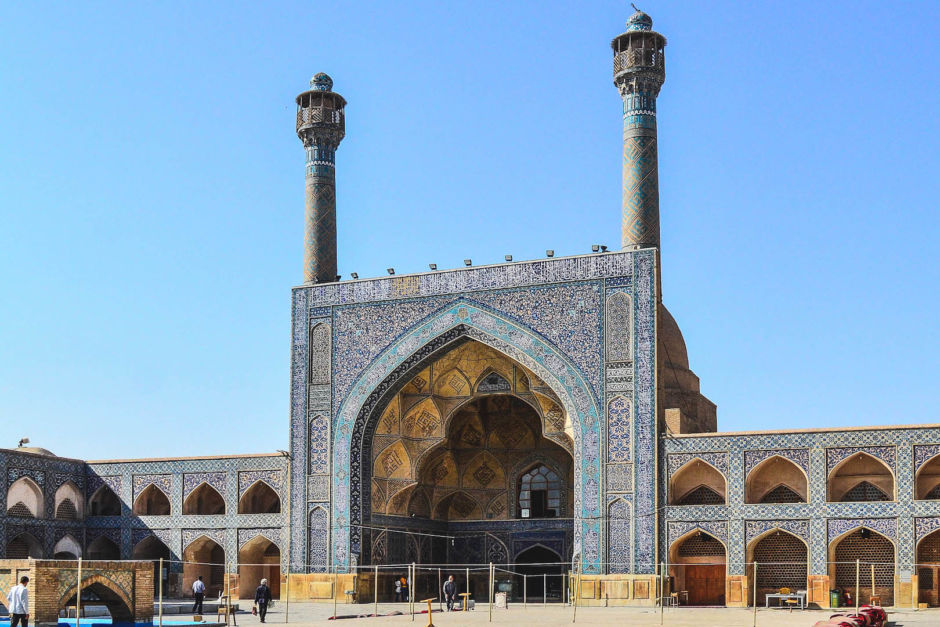 Covering a surface of over 215,000 square feet, Isfahan’s UNESCO-listed Friday Mosque is the oldest preserved building of its kind in Iran, dating back to 841 AD. Located in the heart of the old city, this congregational mosque showcases the evolution of Islamic architecture over the course of 12 centuries. The four iwans (vaulted portals) might appear to mirror each other from the distance, but walk up closely to observe the uniqueness of each individual detail of this masterpiece. 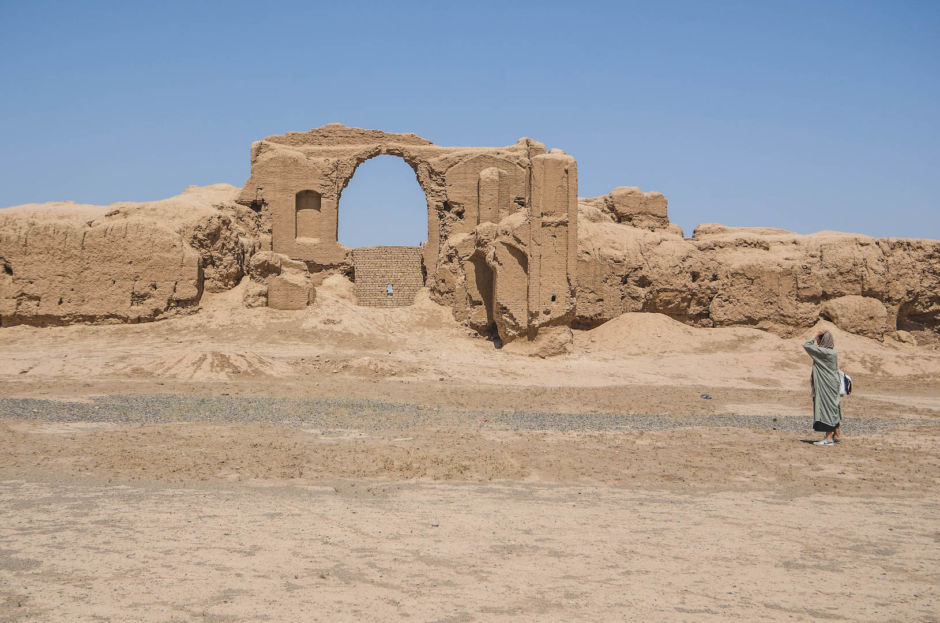 The mud castle of Nushabad might not be on your radar during the planning stage of your trip, but if you manage to find the time to head out of the city center of Kashan, it is surely worth stopping at this archaeological site. Positioned near the 1,500-year-old network of subterranean galleries known as the Underground City of Nushabad, the ruins of the Seljuk-era fortress were built to protect local families from enemy attacks and are one of the most impressive examples of adobe architecture. Climb one of the nine watch towers and admire the view over the village and nearby golden mosque. 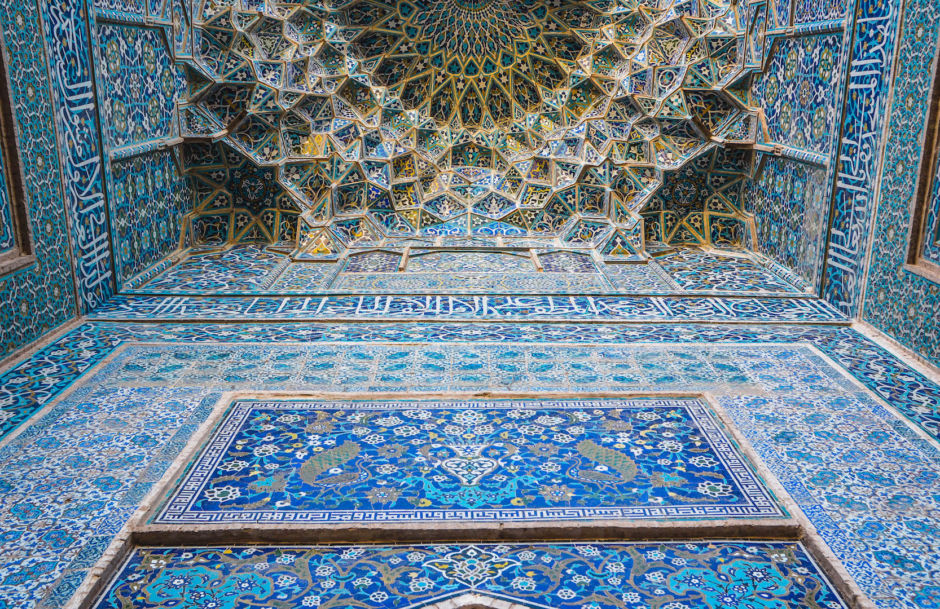 The entrance of Kerman’s Friday Mosque is glorious. A double set of huge doors, decorated with blue and gold mosaics, opens to the central courtyard where red carpets are spread out in front of the iwan for the devout to kneel and pray. Erected in 1349, Kerman’s congregational mosque marks the center of the city and, although not considered one of the greatest religious buildings of the country, will impress you with both its sheer size and fascinating tile work.

Iran: Is it really that bad?
Tagged
Culture Art + Architecture Galleries Trip Planning Iran
What did you think of this story?
Meh
Good
Awesome