France usually conjures up images of fashion, iconic architecture, and cuisine. But in the southwest corner of the country, near the border with Spain, the coastal town of Biarritz is home to something else: a thriving surf scene. Just like the French Riviera, Biarritz offers glitz and glam — but its vibe is a unique contrast between French luxury and a relaxed beach culture. Situated in the Basque country, with its own rich traditions, as well as unique architecture, rituals, and recipes, Biarritz offers an experience you won’t find anywhere else in France. So bring your surfboard and an open mind.

Getting to the resort of kings 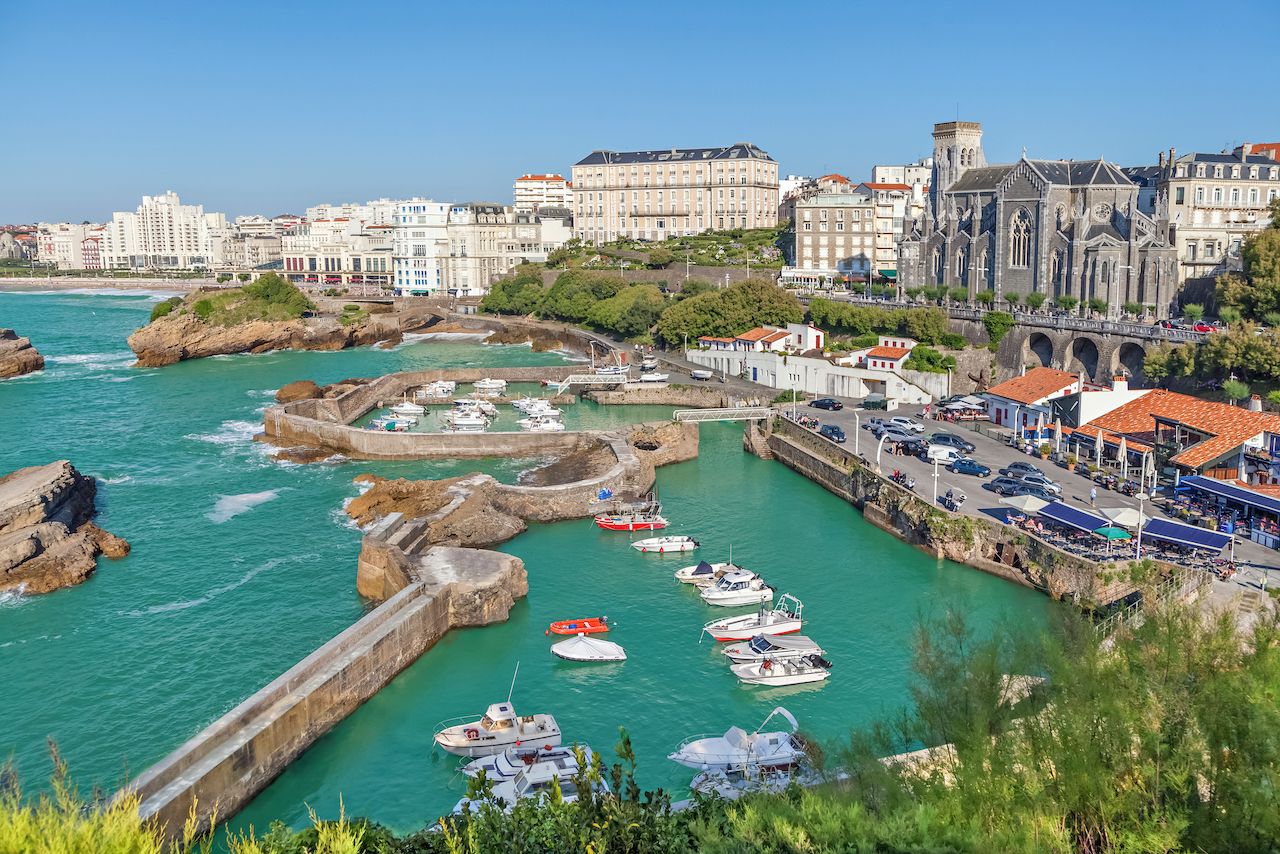 In 1915, as World War I escalated, the town of Biarritz quickly became the vacation destination for Europe’s nobility and anyone who could afford to holiday with the French bourgeois. Due to its popularity with royalty and the wealthy, the town was eventually referred to as “the queen of resorts and the resort of kings.” Though the language most commonly spoken in Biarritz is French, you will find all street signs and some menus also written in Basque.

It’s relatively easy to travel via train to Biarritz from most major cities in France. The direct train from Paris to Biarritz will cost anywhere between $45 and $80, more for nicer cabins, depending on the time of year. The direct train line without connections takes just over four hours, and any connecting train, which usually stops in Bayonne, can take over five hours. Alternatively, if you are short on time, AirFrance and EasyJet have regular flights from Paris directly to Biarritz with a traveling time of about 90 minutes. 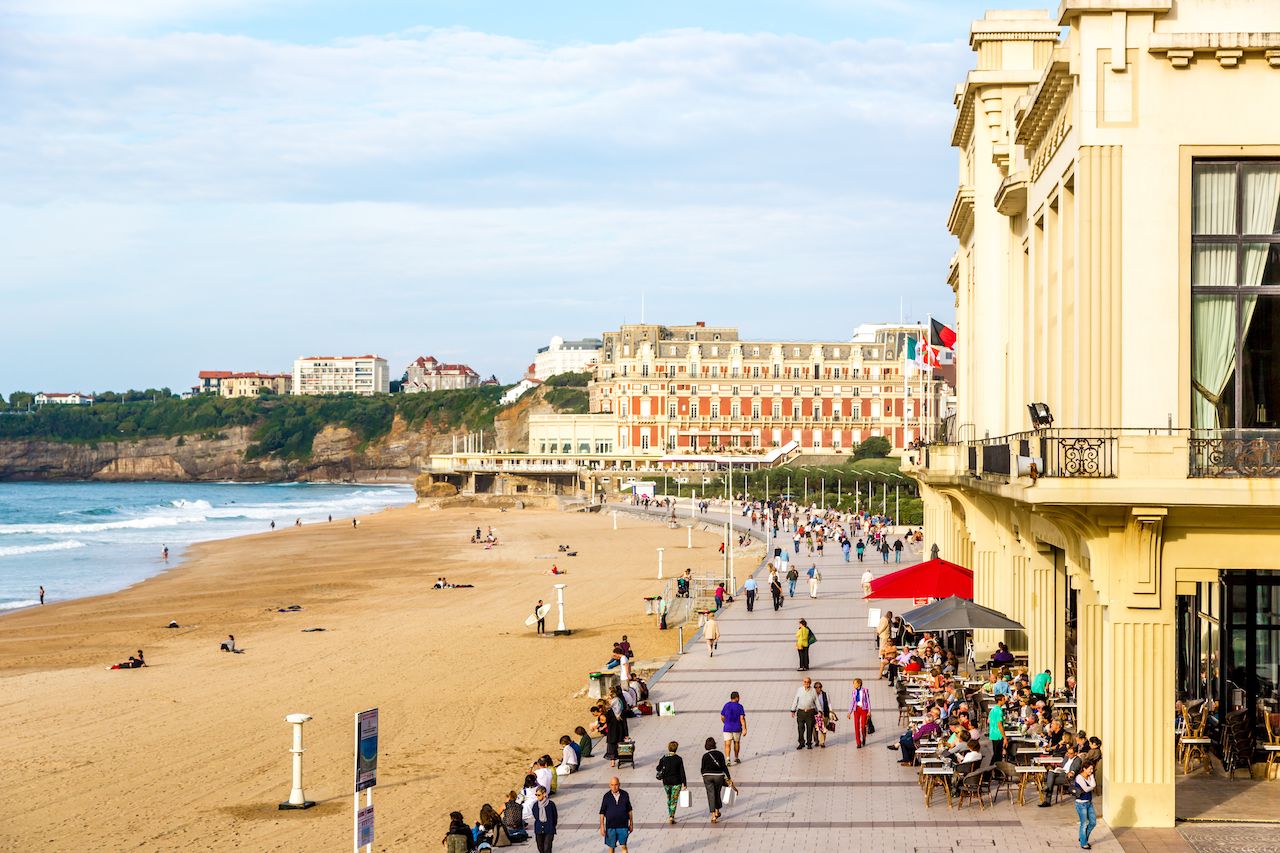 If you want to experience the authentic French style of living, start your day with a trip to the local markets. Consider waking bright and early to savor the smell of fresh bread and pastries, while they’re still warm, at Le Halles. It’s located just off the city’s main street, Rue Gambetta. Here, the produce is fresh and locally sourced, which will provide you with an opportunity to sample the flavors used in some of the Basque regions renowned, Michelin-starred restaurants — without actually paying for a sit-down meal.

Come lunchtime, you won’t find many restaurants in Biarritz open as the French prefer to take time off to enjoy lunch with their families. Shops tend to close between 12:30 and 2.30 PM, which can be frustrating for tourists if they aren’t prepared. We suggest making use of what is on offer at Le Halles as the market provides everything you need to have a Basque-curated picnic on the beach: cured meats, sheep and goat cheeses, piquillo peppers, artichokes, and grilled lamb should do just fine. 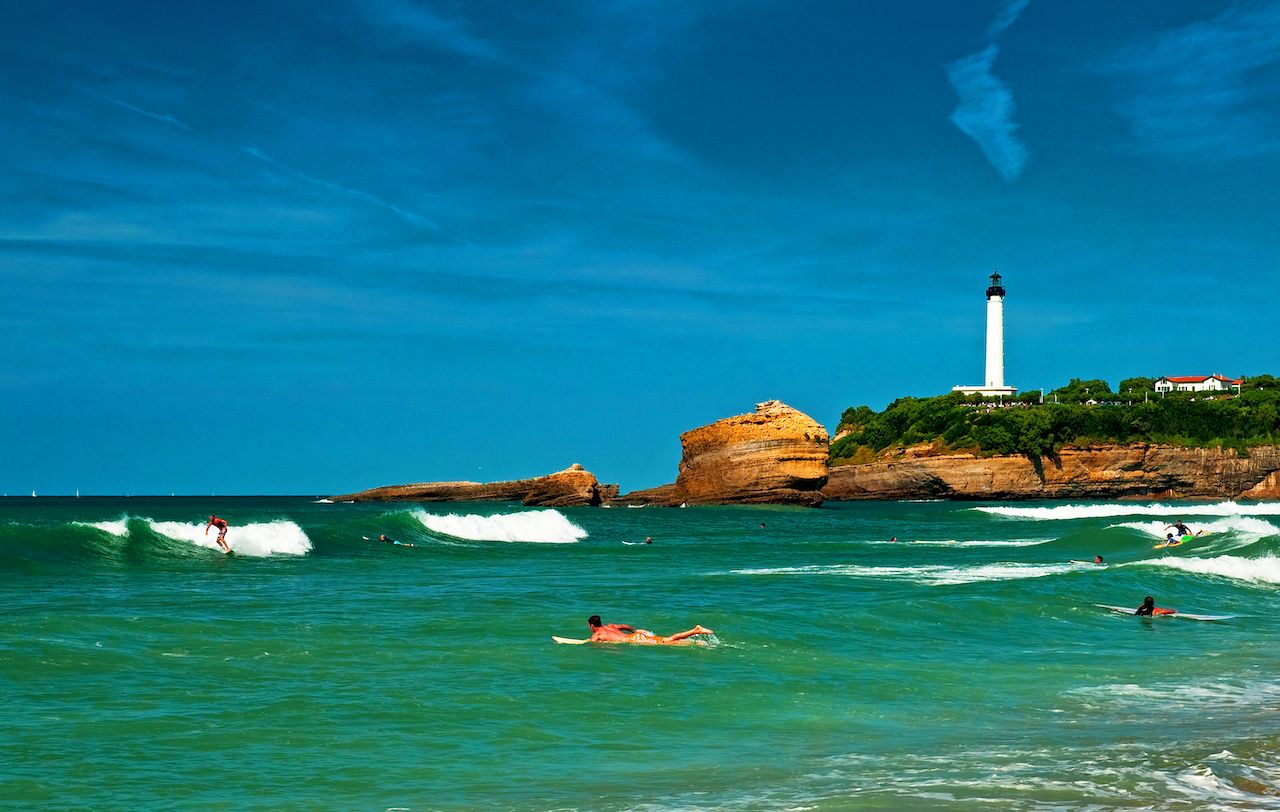 According to locals, surfing was first introduced to Biarritz in 1957 when screenwriter Peter Viertel visited the town to film the movie Sun Rise. Once he saw the waves, he requested his surfboard be sent from California and, soon enough, the locals became fans of the sport.

The beach at La Côtes des Basque is sheltered from northern winds, creating ideal conditions for longboard surfers or beginners. Surf schools, including Jo Moraiz and Biarritz Paradise, are available along this beach all year round, though even the locals prefer to sit and enjoy their coffee at the car park over braving the cold Atlantic Ocean during winter. For more experienced surfers, it’s best to try La Grande Plage or head a little further north to the stretch of beaches with rock jetties that provide good waves for advanced surfers.

The best time to surf these beaches is in June and July; however, mid-September through October is also excellent because you can experience the town without the summer crowds — and before it gets too cold. The surf culture here attracts a young and laid-back crowd while maintaining its Basque traditions. It’s an alluring blend of natural beauty and Euro flare. 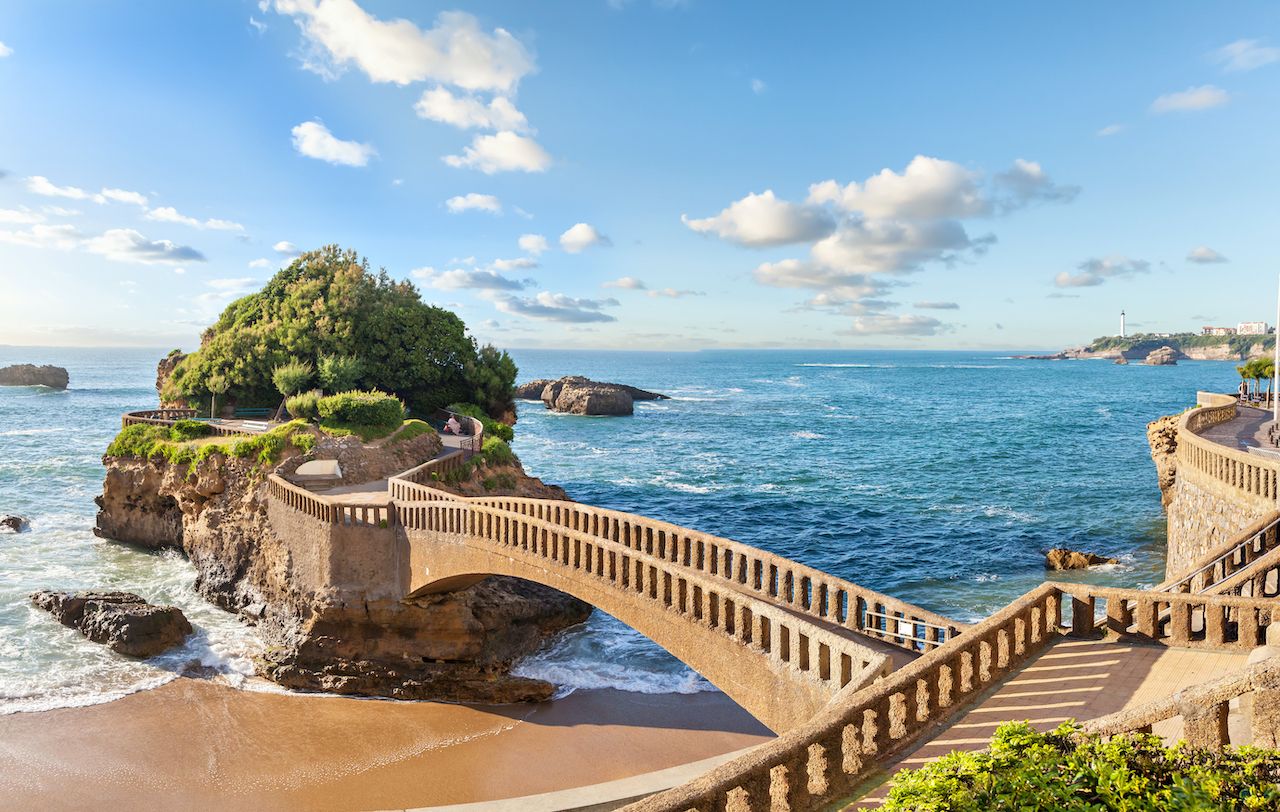 You don’t need to surf to appreciate Biarritz, and there’s plenty to do even without access to a car. Biarritz is a walking town, and you’ll eventually find your way back to where you started. It’s nearly impossible to get lost here, and you can easily walk to nearby golf, shopping, luxury spas, casinos, and some of the best restaurants in Europe.

A beautiful coastal walk from La Côtes des Basque to La Grande Plage takes about 20 minutes, depending on how many times you stop to take a photo. A quick bridge from the beach in town leads to a small, adjacent island and is the best spot in town for a photo. Another beautiful — but sometimes windy — walk is to the Rocher de la Vierge statue. Built in 1865, the statue rests atop rocks surrounded by water and crashing waves, with impressive views stretching as far as the Pyrenees.

If you are lucky enough to visit the town from Sunday to Wednesday, any local will insist you give sunset yoga a try with Namaste Yoga Biarritz. Classes often take place outside of the studio at the famous cent marches, or “100 steps,” at Côte Des Basques. As the sun goes down, soak in the sky’s beauty as it slowly turns a soft pastel pink and purple. 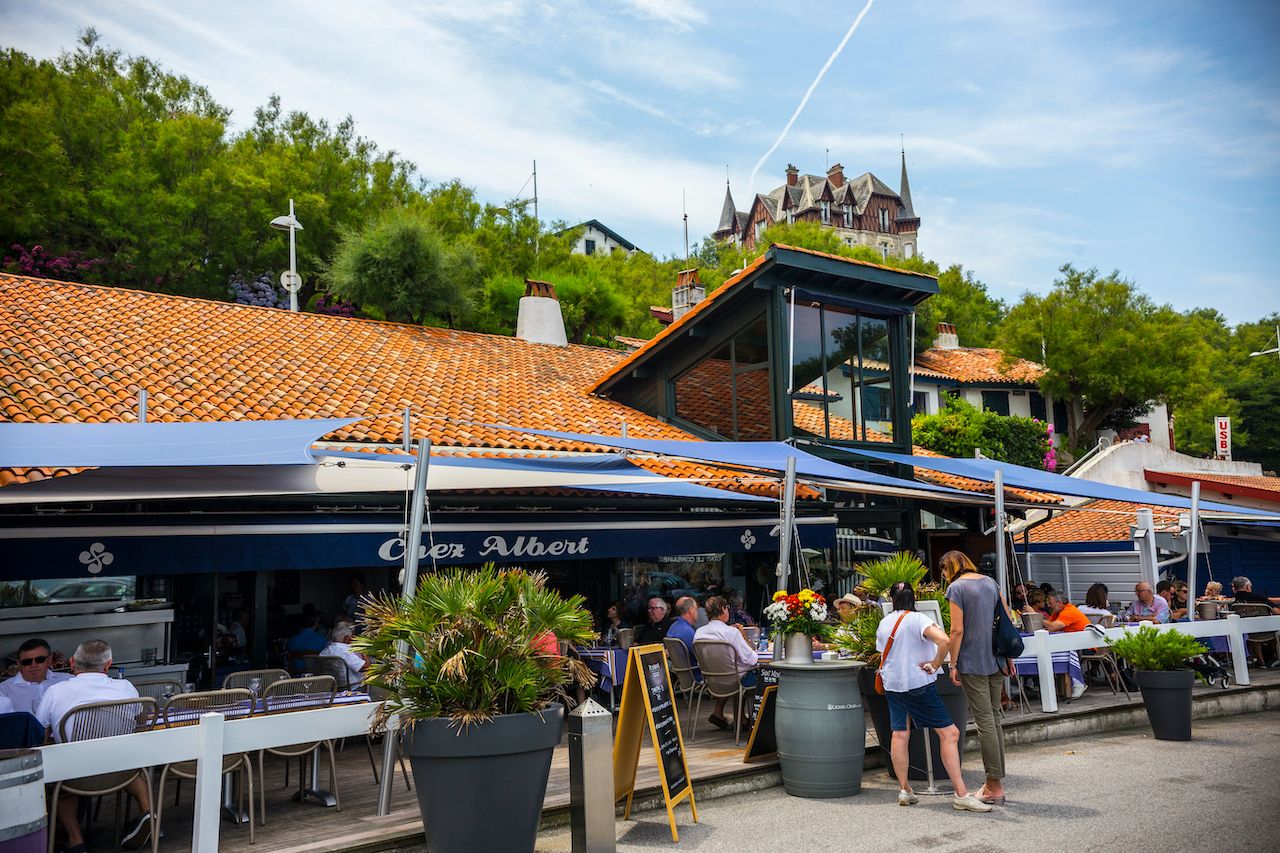 As for the Michelin-starred restaurants, they abound, and a couple even have budget price tags. Le Clos Basque has meals starting for around $30, and depending on the menu, you may find an even cheaper Michelin-recommended meal at Le Pim’Pi Bistrot. Adjacent to the markets you will find Bar du Marché, a simple cafe and restaurant, and a long-standing local favorite. If you didn’t get a chance to sample the produce at Le Halles, Bar du Marché provides a traditional Basque menu full of intense flavors and local specialties. It’s excellent for coffee in the morning or an aperitif and tapas in the early evening.

If you have never been to Italy, Joie Pizzeria is about as close to authentic Italian pizza as you can find outside the country. Alternatively, Saline Ceviche Bar provides another alternative to Basque cuisine. Situated at the top end of town, this restaurant doesn’t quite have the hype that some of the traditional French and Basque restaurants in the area have. Instead, it’s the quiet overachiever that experiments with unique fresh flavors and combinations, such as the salmon carpaccio with mango entree for about $14. 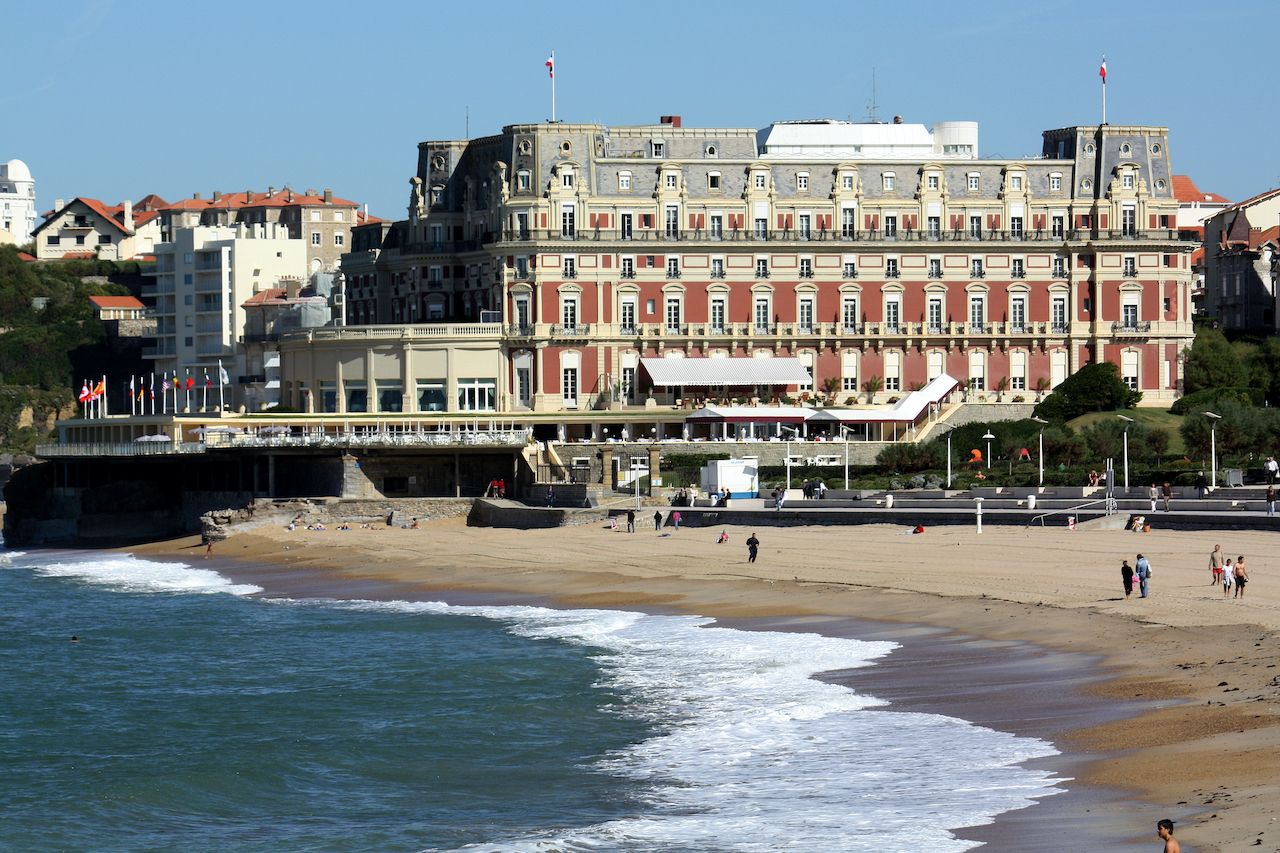 If you are traveling solo or with a partner, you are spoiled for choice with listings on Airbnb. Most studio and one-bedroom apartments are beachfront and, because they’re are priced far lower than what you’d find in Paris, listings are an excellent choice for travelers on a budget. If you prefer to stay at a hotel, the Radisson Blu Hotel and Biarritz Thalasso Resort offer guests accommodation in the center of town with pool and spa facilities.

For a splurge, the Hotel du Palais Imperial Resort & Spa is one of the most iconic and grande buildings in town, originally built as a holiday palace by Napoleon III for his empress, Eugenie du Montijo. The palace has accommodated the likes of Frank Sinatra, Ernest Hemingway, the Duke and Duchess of Windsor, and Gabrielle (Coco) Chanel, just to name a few. It was actually here that Gabrielle Chanel, creator and designer of the fashion brand Chanel, fell so in love with the style and atmosphere of Biarritz that she decided to open her first couture house in Biarritz, attracting the likes of Spanish royalty and Russian aristocrats.

Insider Guides7 Amazing Experiences You Can Only Have in French Basque Country
Tagged
Surfing Insider Guides
What did you think of this story?
Meh
Good
Awesome