Lost in the music video glamor of South Beach is the natural beauty of South Florida. Not so much the parades of statuesque people you see parading around, because most of that’s not natural anyway. But more the nature you find beyond the sea of neon lights and glass towers, home to some stunningly unique ecosystems.

You’re probably familiar with the Everglades, or have at least heard of them. But further south you’ll find a purely Floridian take on a national park, full of turquoise waters, colorful reefs, majestic mangroves, and historic shipwrecks. It’s Biscayne National Park, covered almost entirely by water and a little-known national treasure. It’s only about an hour from Miami by car, and the ideal day trip to escape the city’s feverish pace.

Natural immersion literally within sight of the skyline 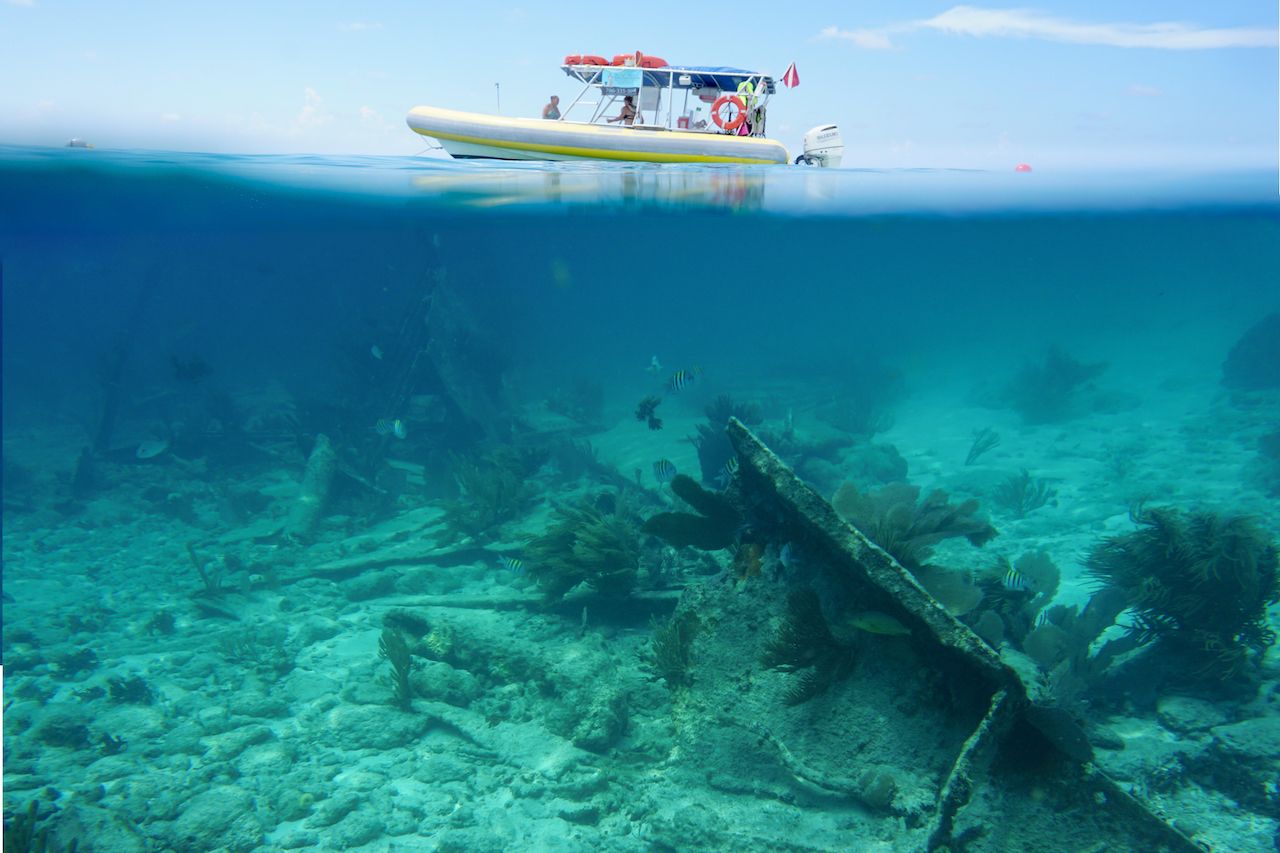 One wouldn’t expect the county with the most densely populated neighborhood south of Manhattan to also be the only one in America with two national parks. But it’s precisely because Miami-Dade County has so much protected space that people are packed so tightly. Drive outside the city, and you’re magically in old Florida, a swampy wonderland of black water and soaring birds.

This juxtaposition is no more obvious than when you’re on the waters of Biscayne National Park, a park that is 95 percent water and fully traversable by boat. Emerging from the mangrove channels near the visitors center, you’ll see the towering skyline of Miami not far off in the distance. Though you may feel submerged in Floridian nature, it’s a stark reminder that the city is alarmingly close.

The park is quickly reached by taking State Route 836 east, also known as the Dolphin Expressway. Take that until it meets Florida’s Turnpike and drive south for about half an hour until you get to the city of Homestead.

From Homestead, it’s a short drive east along country roads to a nondescript sign pointing you to the entrance of Biscayne National Park. Like the park itself, you could almost forget it was there if you weren’t looking, and then a mile down Sir Lancelot Jones Way you’ll come to a small marina and visitors center, which is effectively the park entrance.

Admission is free, though you won’t find much to do inside aside from touring the museum at the Dante Fascell Visitors Center. It’s an interesting look at the history of the area, where you’ll quickly learn that the park was only established in 1968 as a national monument and then in 1980 became a national park. Prior to that, plans existed to dredge the area and create the largest port on the East Coast, the beginnings of which can be seen at Turkey Point power plant just outside the park’s borders. It’s an odd eyesore on the emerald green skyline, but once out on the water, it’s easy to forget.

The best way to see the park is by boat, and assuming you don’t have one you’ll want to book a tour through the Biscayne National Park Institute. This non-profit organization runs virtually all of the aquatic tours in the park and employs guides with extensive knowledge of the park’s history and natural environment. So while you’re face-down in the water looking at colorful fish, they’ll be able to explain not only what you’re seeing but also why you’re seeing so many.

Snorkel your way through a rare ecosystem 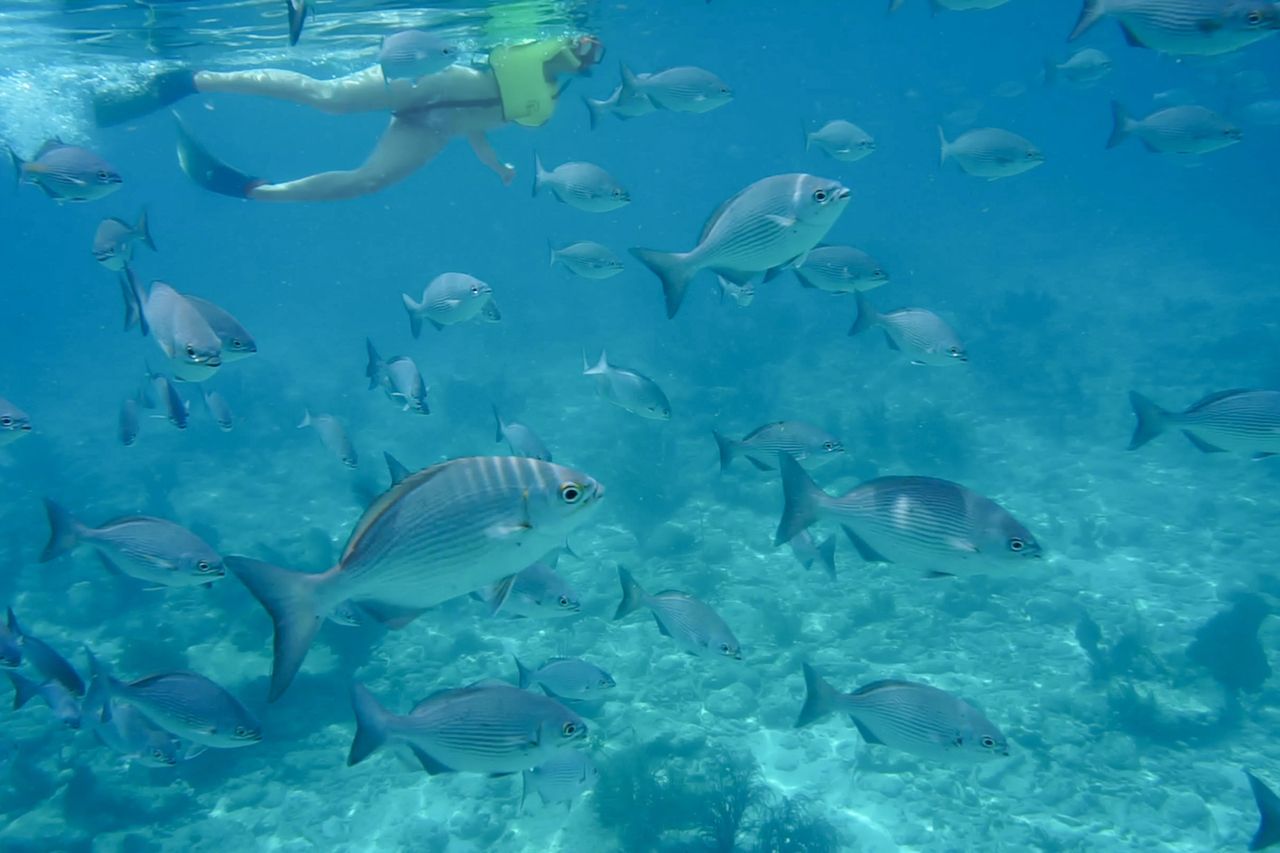 The small islands inside the park are actually part of the Florida Keys. But because Key Largo offered the easiest connection for the Overseas Highway, these keys aren’t connected by road to the others. Still, as part of the keys, the islands share access to Florida’s Barrier Reef and all the undersea beauty that comes with it.

The park shares a border with John Pennekamp Coral Reef State Park in Key Largo, but because it sees a fraction of the visitors, the coral here is in far better condition. Take a snorkeling expedition, and you’ll find yourself smack in some of the clearest waters in America, swimming past sharks, parrotfish, lobster, and quite often bottlenose dolphins. It’s the odd part of the reef where the snorkeling is almost as good as the diving, so you can fully enjoy the reefs without any kind of certification.

Beyond the reefs, Biscayne also offers the unusual opportunity to snorkel among mangroves. The bays off Elliot Key allow your boat to pull up in shallow water, where you can snorkel along the coastline and see the eerie undersea forest the mangroves create. Their long arms stretch deep into the ground while fish swim between them and larger animals hide in the distance. It’s not a site to fear, necessarily, but one even a seasoned Floridian snorkeler probably hasn’t seen.

Further out beyond the keys and into Biscayne Bay you’ll find a string of shipwrecks dating back to the 1800s. This is the Maritime Heritage Trail, a collection of shallow-water wrecks that can easily be viewed without SCUBA equipment. The ships ran aground from 1878 to the 1960s, and most tours stop at as many as weather conditions will allow. While some are better viewed from far below the surface, wrecks like the Arratoon Apcar and the Mandalay are easy for snorkelers.

Further along the Maritime Heritage Trail you’ll find the Fowey Rocks Lighthouse, an 1878 lighthouse in the middle of the bay that’s guided ships away from the shore for decades. It is still in operation today, though completely automated.

If you are inclined to dive the park, it’s not as simple as taking a tour from the visitors center. Only a couple of private dive outfits are licensed to run tours in Biscayne, and those are only private charter trips that cost about $200 per person if you can round up a crew. You can also find private fishing charters who operate in the park, as fishing and lobstering are allowed here in accordance with Florida Fish and Wildlife regulations.

Paddle through Florida history under a canopy of mangroves 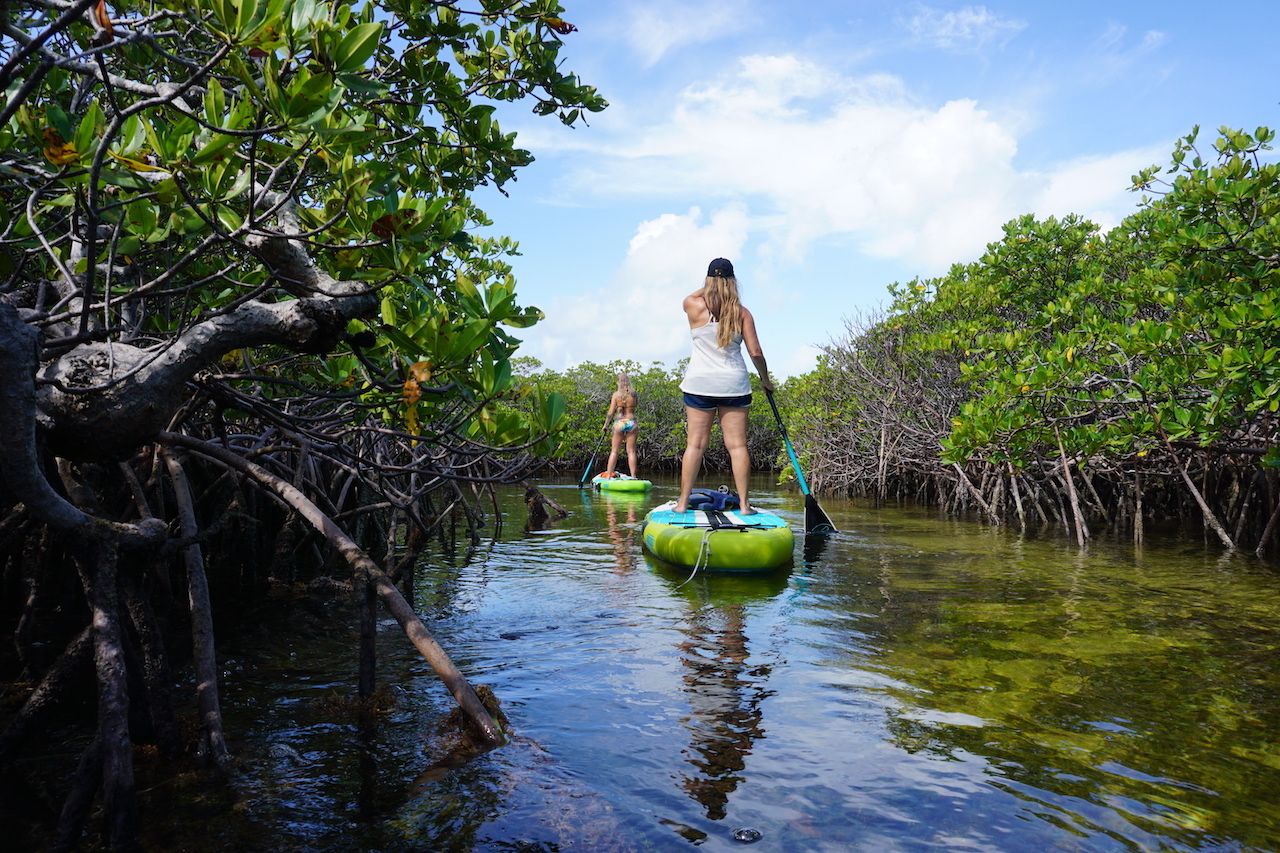 The five percent of Biscayne National Park that’s on land tells a fascinating story as well. Much of the park’s land once belonged to the Jones family, early African-American farmers who grew pineapples and key limes in the 19th century, As your guide steers you through the islands, they’ll tell you of the family who lived on Porgy Key and managed what became some of the most valuable land in America. The last Jones to live there — known locally as Lancelot — used to take his boat from his home to the old visitors center on Adams Key and regularly visit with guests.

Driving past Adams Key, you’ll hear of the fishing club that once stood there and how it drew movie stars, athletes, and even a couple of presidents for weekend getaways. You’ll still find buildings on the island — though they don’t serve much purpose anymore, it’s a good place to stop for an afternoon picnic.

Some tours will also take you on paddleboards through the narrow channels inside the keys. The water is so clear you’ll see fish swimming all the way to the bottom. At some hours they’ll even jump right up onto your board. You might also see eels and even the occasional shark swimming around. Under the mangrove canopy you’ll feel a world away from Miami, even though you’re only minutes from seeing the skyline.

Further up the keys you can stop at a couple of historic lighthouses too. Boca Chita is the most popular, a small island about an hour’s boat ride from Miami that’s big among recreational boaters. The island is a fantastic place for an overnight camping trip if you’re inclined to spend more than a day of your vacation in the park.

Venture closer to the city and you’ll see Stiltsville, a technically-off-limits collection of homes built in the middle of the bay. They’re curious relics that have survived numerous hurricanes, and though no tour from the park will take you there, they’re an unusual sight from a distance.

A full-day tour will generally start around 10:00 AM and finish around 4-4:30 PM, just before the visitors center closes. After a long day on the water and in the mangroves, you’ll likely call it an early night once you get back to Miami. A trip to Biscayne National Park will be a long one, to be sure. But as far as natural, tropical escapes from a busy city vacation, you won’t find a better one.

TravelOnce You’ve Swum With Manatees, Here’s What Else To Do in Crystal River
Tagged
Beaches and Islands National Parks Miami, FL, United States
What did you think of this story?
Meh
Good
Awesome