Colombia has emerged from its darkest days of gang warfare and violent crime to become a compelling destination for travelers. And Bogotá’s street art scene is one of the major crowd drivers to the nation.

The Colombian civil war began to de-escalate at the beginning of this century and in 2016, a complete ceasefire was announced. Following the ceasefire, tourists flocked to the country which had once been deemed too dangerous to travel in.

Today, one of the capital city’s most captivating aspects for travelers is its colorful, chaotic, and prolific street art. Bogotá’s street art scene flourished in the 90s fuelled by the effect of the civil war along with the activities of Pablo Escobar’s notorious drug cartel. During that time, Colombia became not only a dangerous country, but also one that suffered from widespread poverty. The situation was reflected in the street art which sprung up everywhere. These days, however, in addition to art work representing political struggles, there are also plenty of whimsical and entertaining creations on the streets of Bogotá. 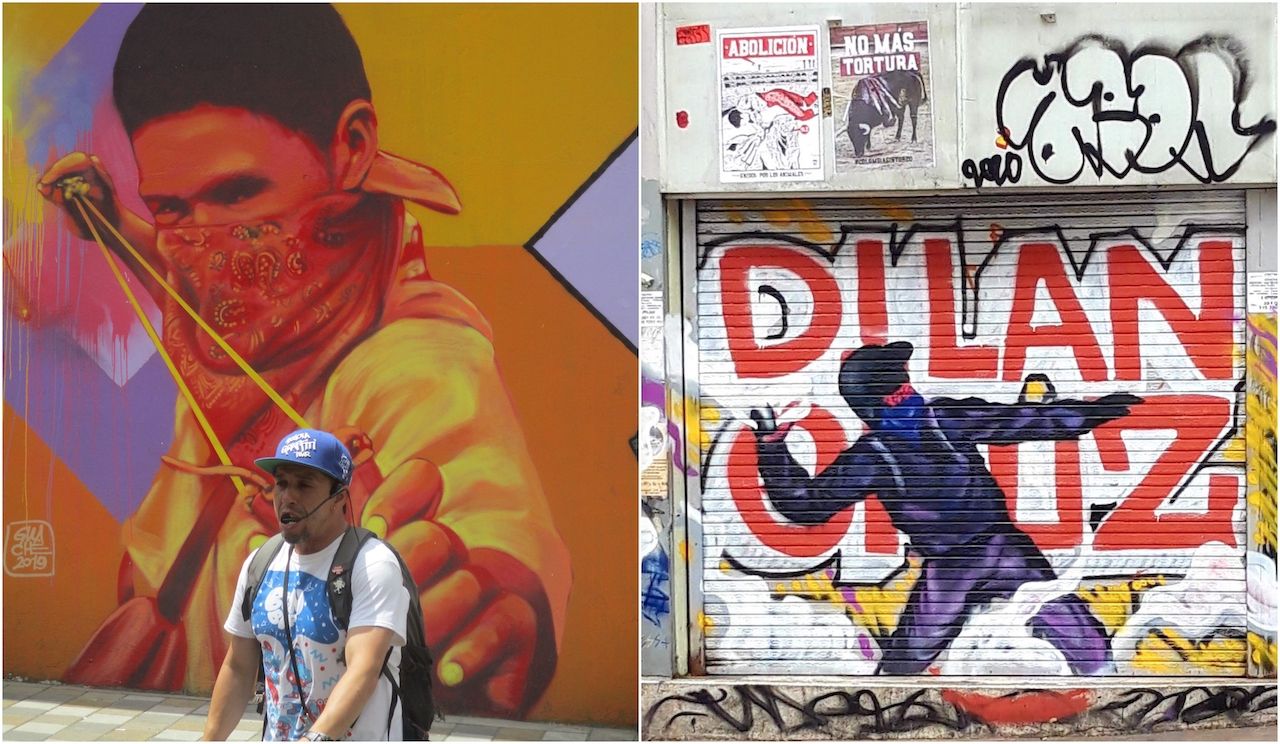 One of the best ways to experience Bogotá’s street art is to sign up for the Bogotá Graffiti Tour. The free tour, which has been running since 2011, was founded by Australian street artist CRISP, who specializes in socio-political art, stencil work, and street sculptures. The rest of the team, Jay, Monica, Ana, Jeff and Carlos are a group of artists, creatives, and Bogotá experts who are passionate about Bogotá’s street art scene. Any donations received are used to reinvest in the community and create projects in Bogotá and all over Colombia.

The tour kicks off daily at Parque de los Periodistas, situated in the historical district of La Candelaria, at 10:00 AM and 2.00 PM. These tours are in English, but private tours are offered in Spanish, French, and Dutch. As well as taking in some of the area’s most significant work, the guides dive deep into the history, politics, and artists that have contributed towards making the city’s street art scene what it is today. A recent addition to the tour is a stop at the corner where teenager, Dilan Cruz, was hit by a police projectile during the anti-government demonstrations at the end of 2019. He consequently died in hospital. A piece of street art has been dedicated to him at the spot where he was hit.

The murder of Diego Felipe Becerra

Street art in Bogotá has only been decriminalized in recent years following a tragic incident that occurred in 2011. Diego Felipe Becerra, a 16-year-old street artist, was killed by police while spray painting a wall in the neighborhood of Aguas Calientes. Diego was creating his signature motif of Felix the Cat when the police arrived. He tried to run away from the scene and was shot. The Bogotá Police attempted to cover up the shooting and falsely claimed that Diego had been involved in an armed robbery. Protests took place across the city, attended by street artists and their supporters, and Diego subsequently became a posthumous hero of Bogotá’s street art community.

As strange as it seems, Justin Bieber also inadvertently contributed to the acceptance of street art in Bogotá. While he was in the city for a gig in 2013, he was escorted by police, at his request, to a wall with the intention of creating his own masterpiece. There, he proceeded to spray paint an image of the Canadian flag, replacing the maple leaf with a marijuana leaf. Anger erupted amongst the street art community, who for many years, had been forced to paint under the cover of darkness. The pop star was allowed, even encouraged, to spray paint the wall when one of their own had been murdered for doing the same thing. The following day, hundreds of artists arrived at the scene to paint over Beiber’s flag.

Justin Bieber’s street art escapade, together with Diego Becerra’s tragic death, led to the acceptance of street art by the authorities. Nowadays, street art is allowed anywhere as long as permission is given by the property owner. The government has even commissioned art across the city. 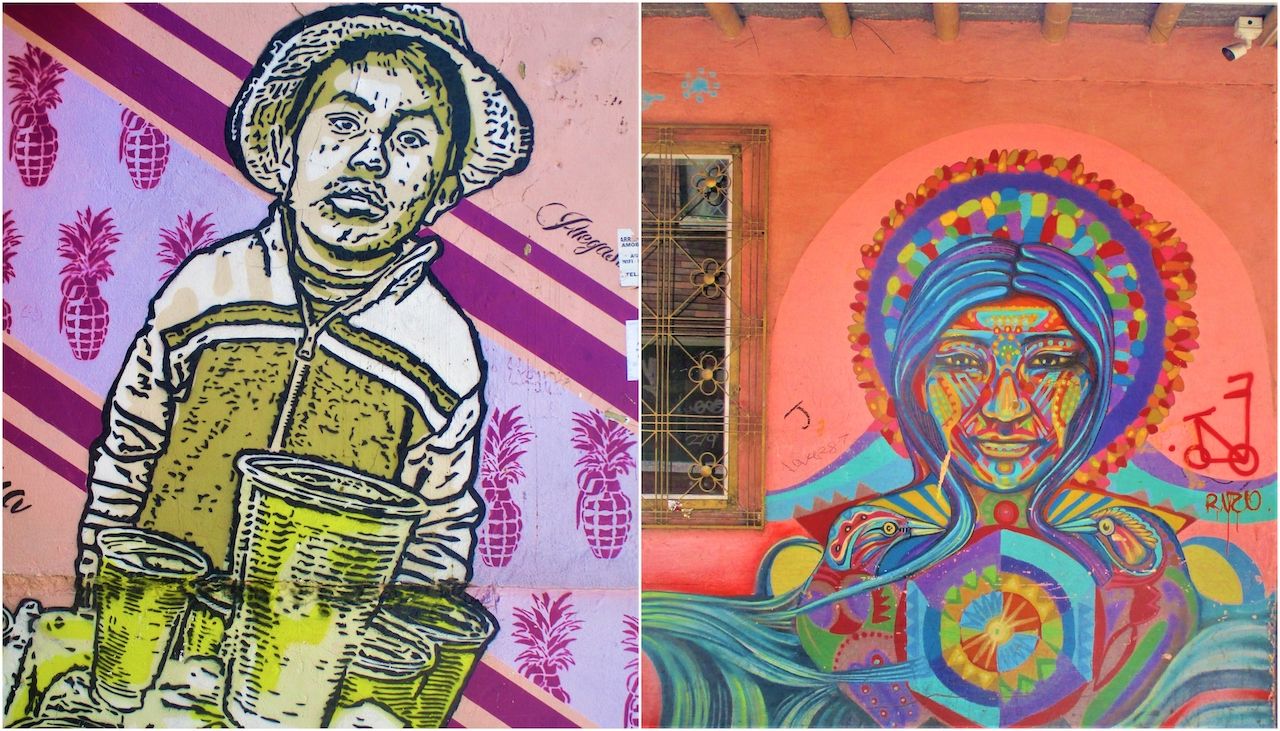 Both Colombian and international artists contribute to Bogotá’s street art scene. Stinkfish, whose work is noted for its freestyle spray strokes and face stencils, is known as one of the country’s top artists. Guache is another prominent artist and is a member of the Bogotá Street Art Collective. He creates colorful pieces relating to indigenous people and wildlife. Carlos Trilleras is known for his detailed fantasy figures which adorn many buildings in La Candelaria. Other prominent artists include Rodez, Pez, and DjLu. One of the few female artists is Bastardilla, whose work focuses on violence, poverty, and feminism. Many of the local artists also belong to street art collectives such as Animal Powder Crew or MAL.

Where to see the best of Bogotá’s street art 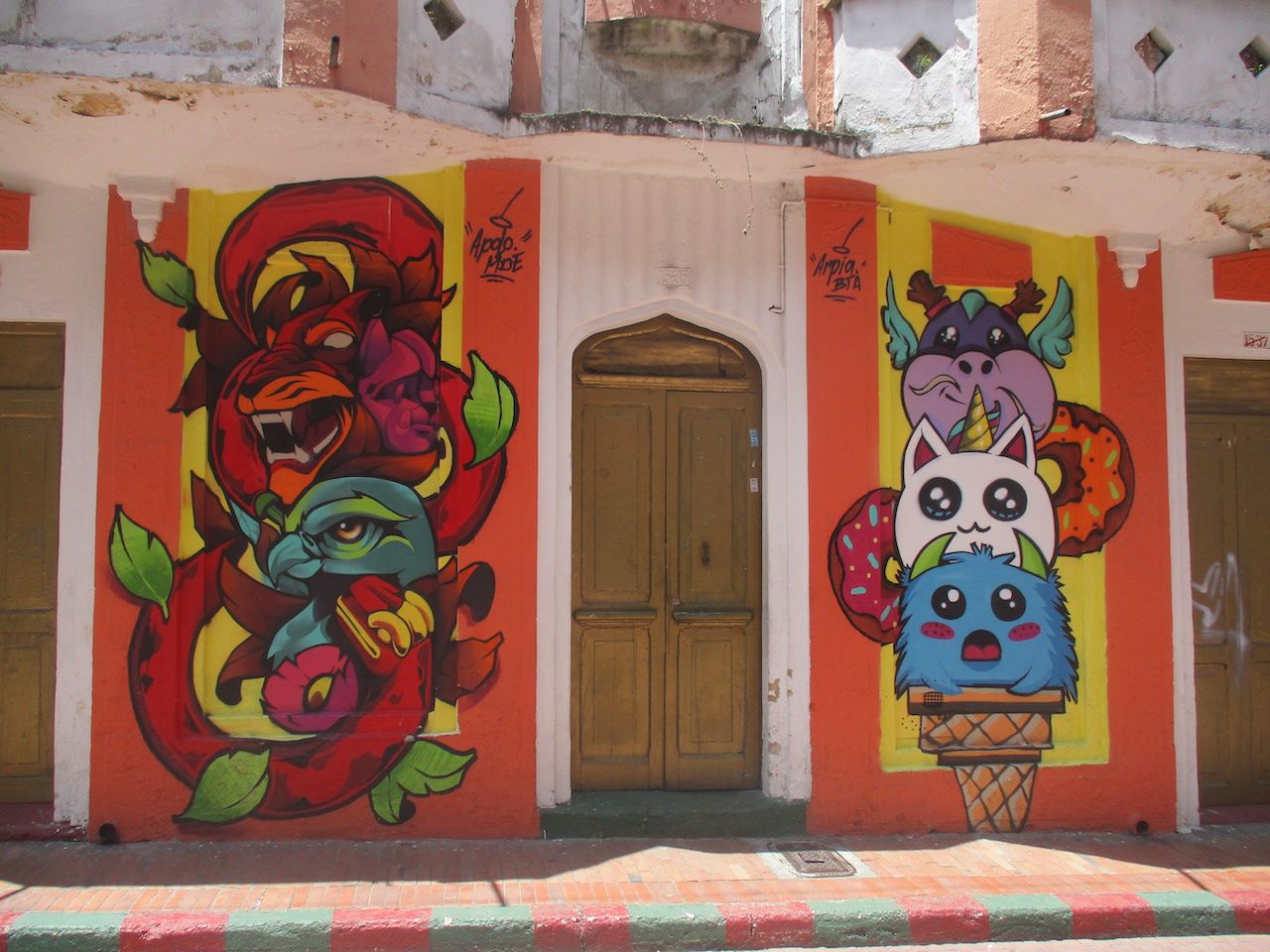 Upon arriving at El Dorado, Bogotá’s international airport, the city’s passion for street art is immediately apparent. A profusion of street art and graffiti lines the main drag of Avenida El Dorado, which stretches from the airport to downtown. In fact, some of the largest and most striking pieces in the city can be seen here. On Sundays, traffic is banned and cyclists and pedestrians take to the street, giving the area a chill vibe and making it a perfect time to view the vicinity’s street art. 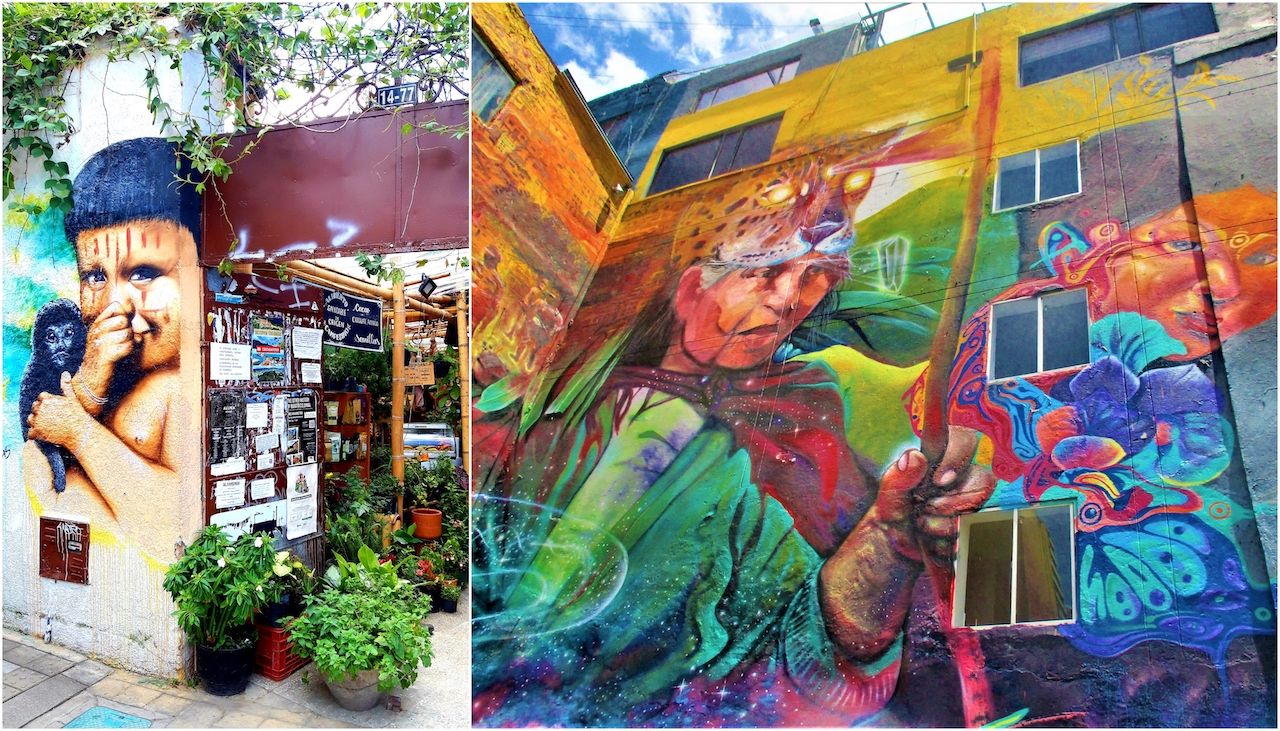 La Candelaria is a popular location for budget travelers and backpackers to stay and it also has the highest concentration of street art in the city. It is particularly abundant around Parque de los Periodistas, which also happens to be the starting point for the Bogotá Graffiti Tours. The area has an edgy vibe, but it is safe to stroll around during the day and the hilly streets of La Candelaria are home to most of the city’s finest colonial architecture. Colorful creations can be seen everywhere from hotels and storefronts to doorways and basketball courts. In fact, the owners of many of the buildings actually commission artists to decorate their properties.

The newest hotspot for street art is the industrial area of Puente Arande, otherwise known as Distrito Graffiti. Commissioned by the Colombian Secretary of Culture, the aim of the project is to promote the responsible practice of street art and self expression. Additionally, the hope is that the project will help change the misconception of street art as vandalism. The area covers two blocks of brick warehouses which have been painted by over one hundred street artists from all over the world. It’s an impressive sight which has brought vibrancy and purpose to a previously down-at-heel area.

ActivismHow Former Gang Members Are Rebuilding Bogota’s Most Violent Neighborhood
Tagged
Art + Architecture
What did you think of this story?
Meh
Good
Awesome