Hiding in the hemline of the Amazon basin is Bonito, Brazil. Like a looking glass to the underworld, it’s one of the most precious places in South America. While the surface is an unassuming place of ochre landscapes, beneath the layers is a destination worthy of its name, which is Portuguese for “beautiful.”

It’s the gateway to the Pantanal region, yet in this maze of brushlands, the focus turns from the Pantanal’s jaguars and spectacled caimans to serene natural aquariums. Located in the Brazilian state of Mato Grosso do Sul, the magical and seemingly mythical waterways offer shallow, warm, undulating pools that are clear as glass. Credited as the cleanest water on the continent, the area’s rivers, lakes, and waterfalls beckon to an elite class of adventures in search of a freshwater paradise and fairy forests.

River snorkeling from Barro do Sucuri to Rio da Prata 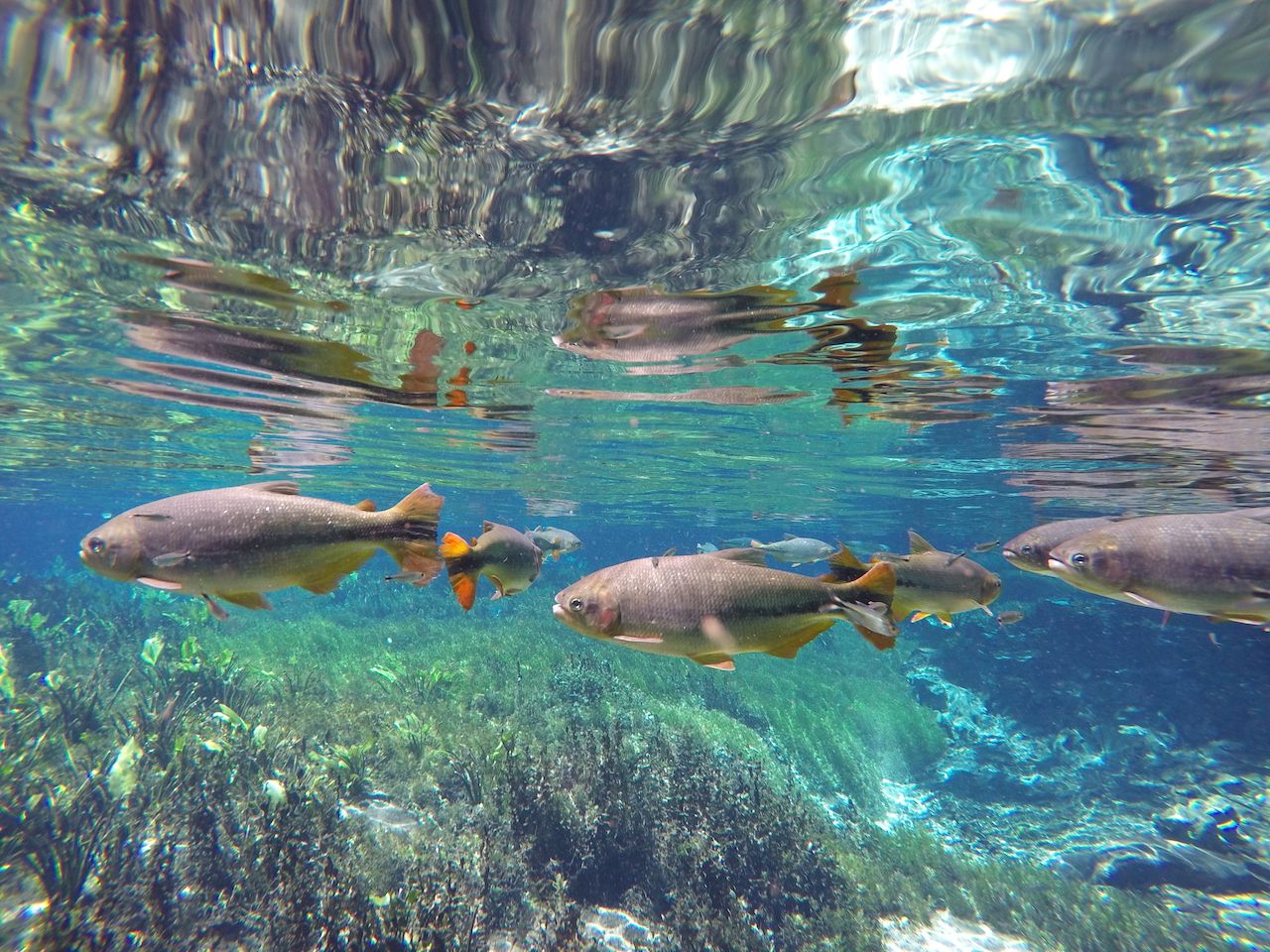 Those lucky enough to discover Bonito are often tipped off during excursions in nearby Paraguay and Bolivia or from the neighboring Pantanal, which is popular for safari-like tours into Brazil’s tropical wetlands. On a day trip from any of these destinations, outdoor lovers succumb to the allure of freshwater river snorkeling, perhaps the best on the planet.

The shallow, calm, and crystalline water of the Rio Sucuri stems from natural springs boasting stable 77-degree temperatures, abundant aquatic life, and epic environs mirroring both the Amazon rainforest and the Chaco savannah. The pristine freshwater takes its clarity from a high limestone concentration, which acts as Mother Nature’s most efficient filter. White sandy river bottoms, typically aquamarine skies, and verdant green foliage work together to create the illusion of viridescent rivers, lakes, and waterfalls. 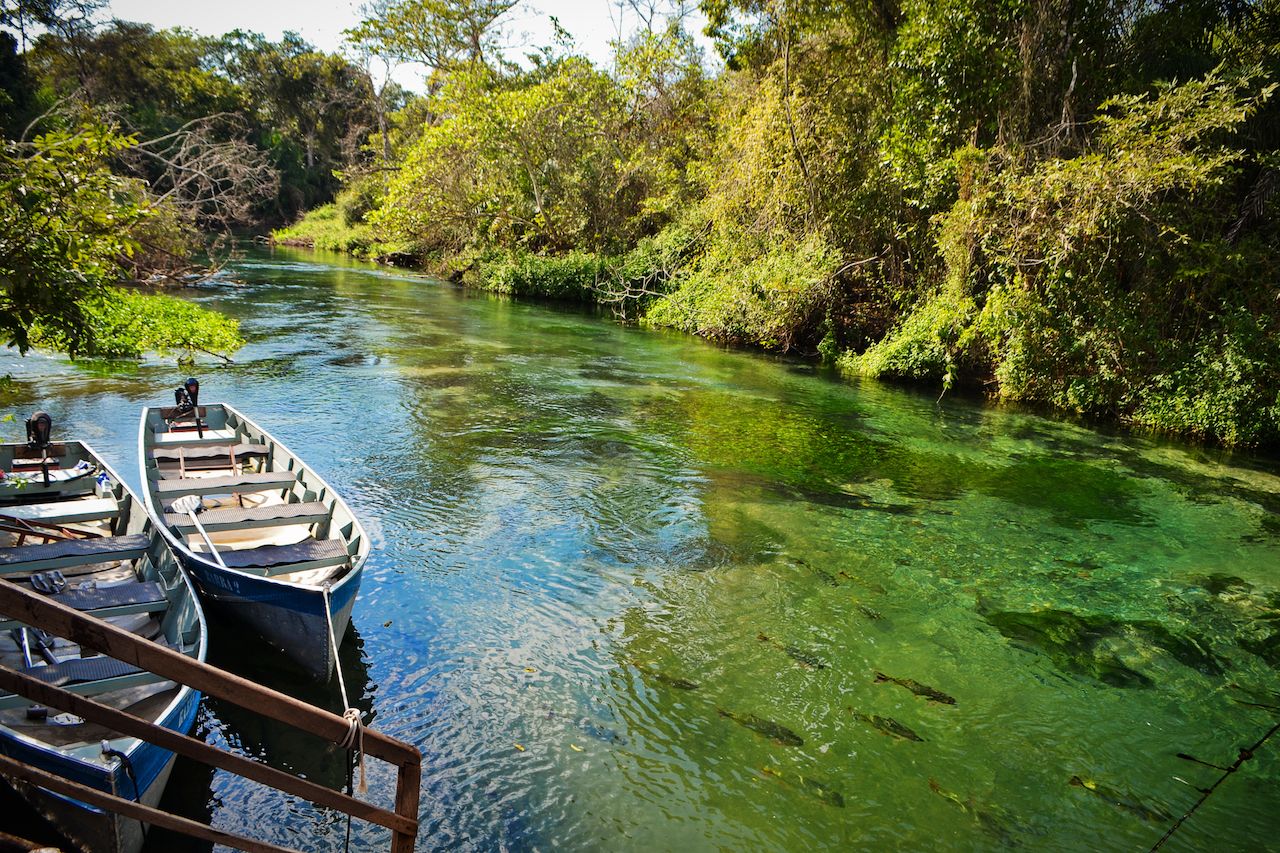 Foolproof snorkeling tours in either the Barra do Sucuri, the Rio Sucuri, or the Rio da Prata allow even the most inexperienced swimmers and snorkelers the chance to cherish one of the most unique landscapes in the Americas. It is an opportunity like no other to commune with nature, lazily floating fin to fin among the underworld creatures of the Amazon, like the metallic dorado and the citrus-striped piraputanga fish. A lucky few might even encounter the legendary but surprisingly docile anaconda, tapirs, or giant river otters. Above water, toucans, macaws, anteaters, and capuchin monkeys gaze down on the less-graceful human species. 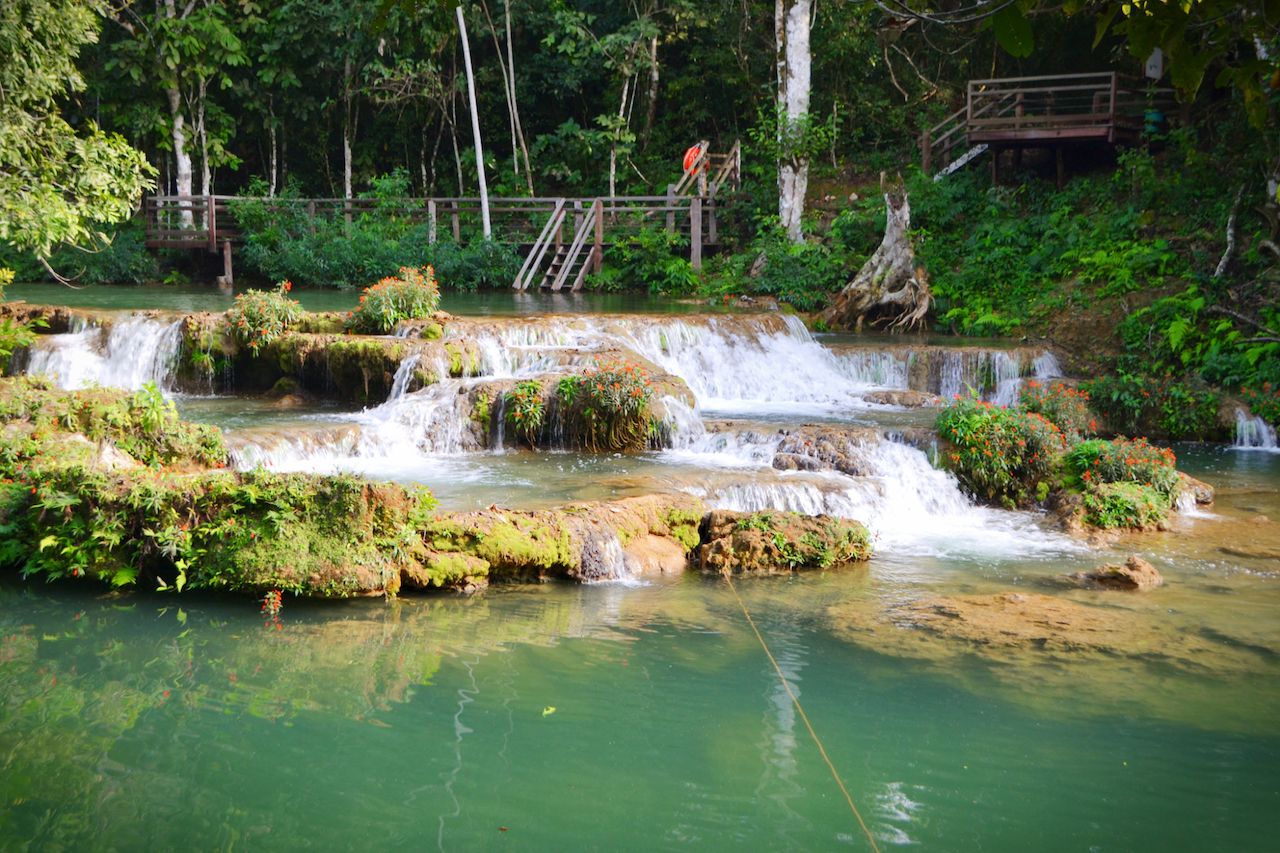 Although the main draw of Bonito is the experience of freshwater snorkeling in the Amazon wetlands, it would be a genuine misstep to visit without seeing the rest. Beyond the miles upon miles of scenic rivers, Bonito is an eco-tourism hub regarded as the best in Brazil. The serene waterways and impressive landscapes definitely do not end at the riverbank. In fact, for genuine adventure lovers, outdoor enthusiasts, and remote travel aficionados, there is plenty to do in Bonito for a week or more.

Plan the trip wisely, booking with the hospitality-rich, budget-happy, eco-friendly, family-friendly Bonito HI Hostel (a subsidiary of Hostelling International). Not only does the oasis boast a private swimming pool, on-site cafe, and rooms with reliable WiFi, hot showers, and air conditioning, but it’s also a glorified tour company. Staying here makes it easy to book tours to more than 40 attractions in this stunning, rural community of Mato Grosso do Sul. From group dorms to private rooms, grassy campsites, and parking for overlanders, Bonito Hi Hostel is a hit for travelers who want to save on where they stay, skimp on complications, and splurge on experiences.

Bonito is packed with waterfalls. 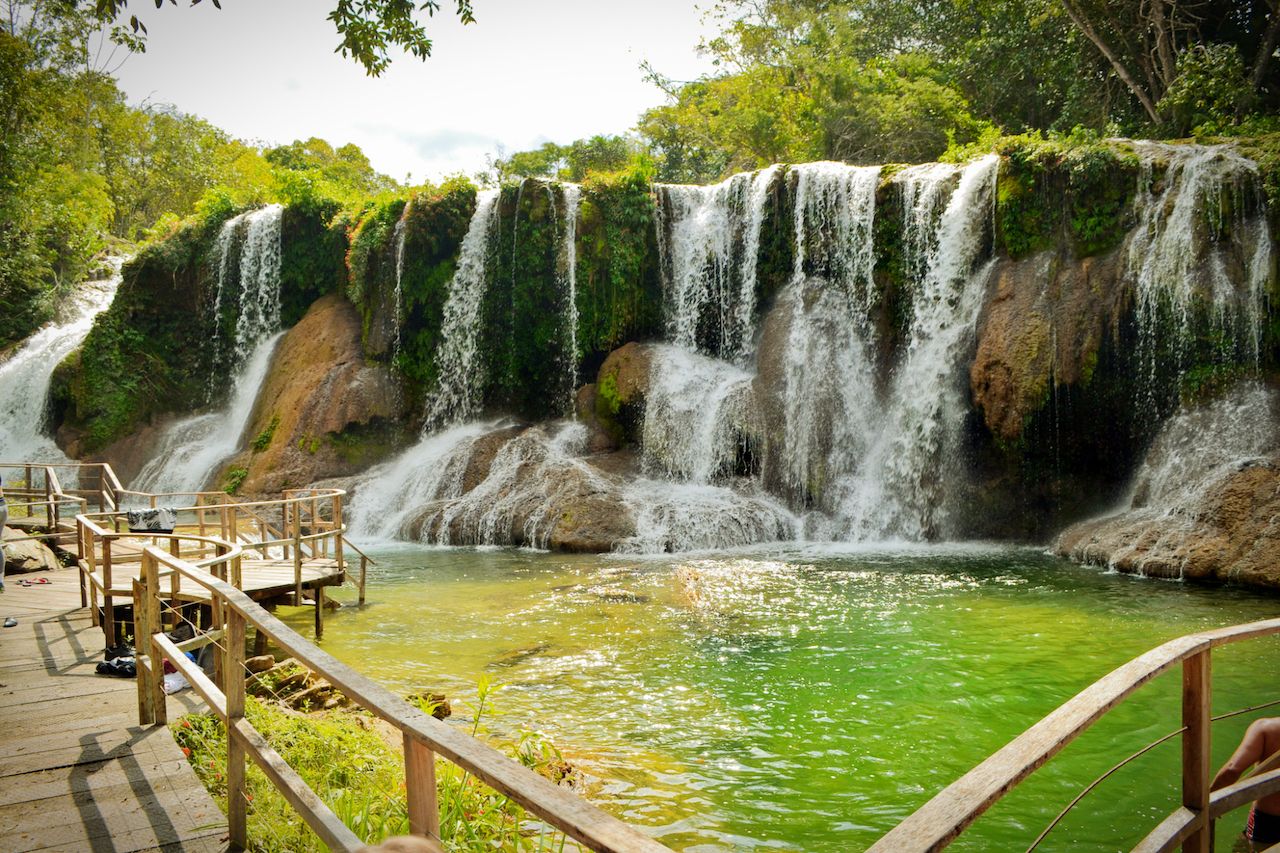 Although there may be an abundance of waterfalls in Brazil and the outlying Amazon areas, not all cascades are equal. In Bonito, the waterfalls are those of fantasy: easily accessible, gem-hued, and suitable for swimming. The Parque das Cachoeiras is the local star, a mile-long scenic pathway that accesses seven breathtaking waterfalls.

The guided boardwalk-esque tour winds through the forest, along the impossibly cerulean colored Mimoso River, dropping into pool and after pool of fairyland waterfalls. The lack of any notable ascent or descent on the trail is paired with calm, shallow ponds — making this waterfall route suitable for most ages and ability levels. 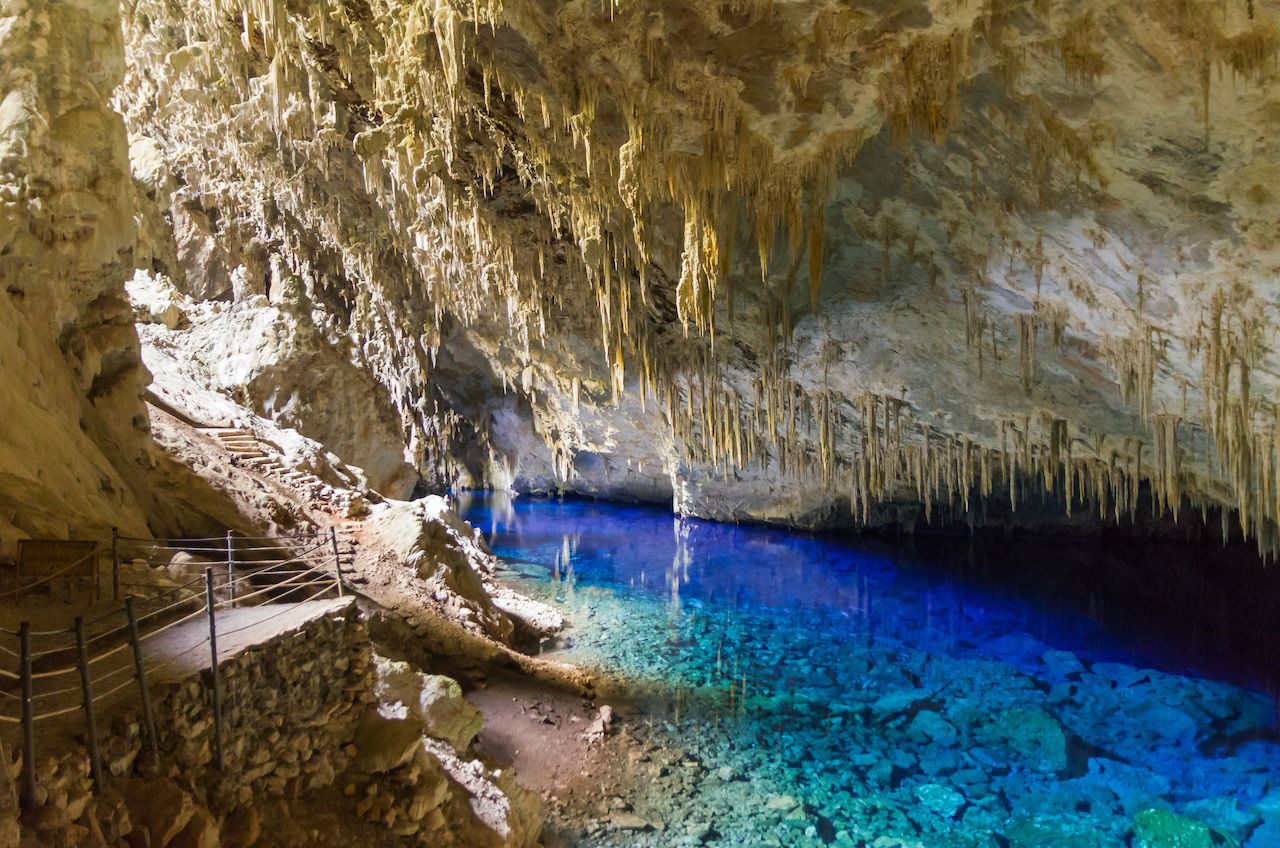 A trip to the Amazon underworld wouldn’t be sufficient without a peek into the dark and mysterious caves and lakes that lie below the surface. From Bonito, there are three notable realms, particularly captivating for spelunkers but equally alluring for those who prefer other extremes like scuba and abseiling.

As if aquarium-like rivers and fantasy waterfalls were not enough, Bonito is also home to at least three notable caves: Grutas de São Miguel, Gruta São Mateus, and the truly epic Gruta do Lago Azul. The latter is one that will be hard to keep secret for long: an intense sapphire and tourmaline lake cradled 330 feet below the surface, it’s one of the largest water-filled caves on the planet. The natural monument is an icon of Bonito, inherently protected under conservation statuses, with limited tours offered daily.

Encrusted by impressive stalactites and stalagmites, the crystalline waters appear vibrantly hued through a careful balance of sunlight and minerals. The walls reflect 10,000-year-old fossils like saber-tooth tigers and giant sloths while the bottom of the lake — over 285 feet down — has never been reached. 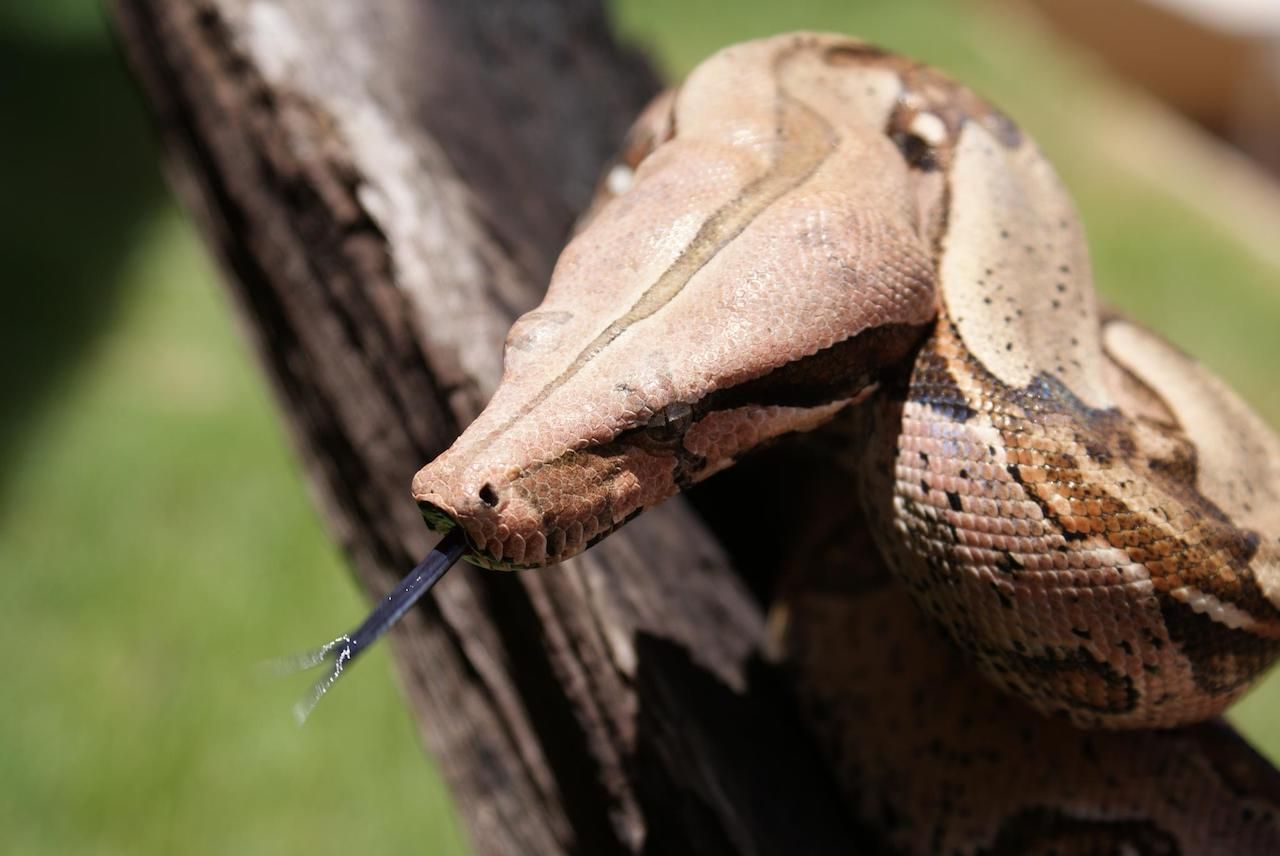 From below the treetops, adventurers can truly relish Bonito. You can take to the sky with tours that go just below the forest canopy through a high-rope trail that’s over a mile long, 65 feet above ground at Sitio Ybira Pe. The canopy park dangles above the Rio Formoso, offering full-day passes for swimming beyond completion of the canopy ropes course.

Bonito even has its very own boa project, locally known as Projeto Jibóia. This educational facility and presentation is all about the large and lovable native snake, the boa constrictor. Each night, visitors are invited to view dozens of live snakes, listen in on a presentation that preaches education over hysteria, and, finally, hold one of the large snakes for an unforgettable finale.

Resort oases in the hot sun 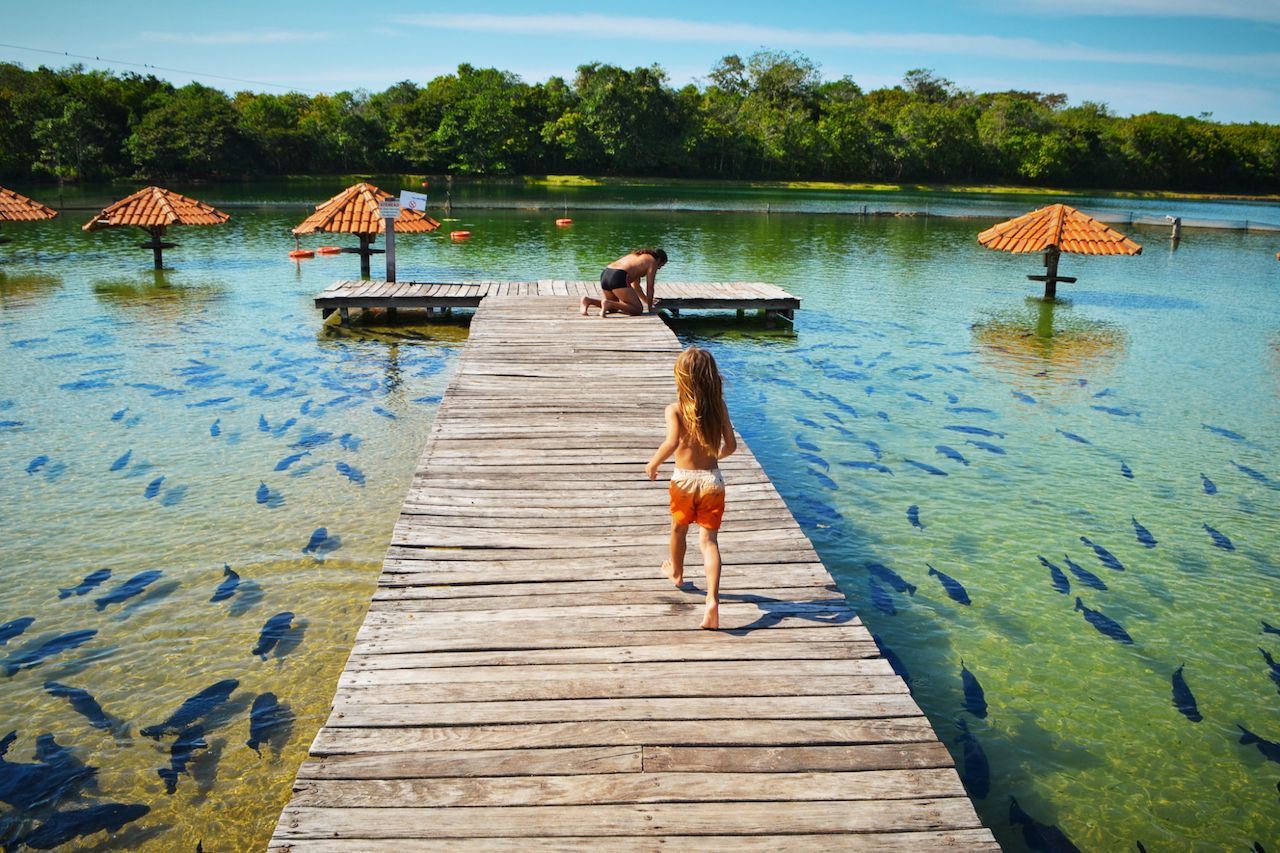 And then there are the beaches designed as day resorts, offering the splendor of countless clear water lakes and rivers in a setting suitable for sunning, swimming, snorkeling, zip-lining, paddleboarding, platform diving, and more.

The options are truly endless in this regard, but notable mentions go to Praia da Figueira and Balneário do Sol. Choose the first for soaking up the unfathomable Brazilian sun and the second for slinking into an Amazonian oasis.

Praia da Figueira is a wide-open lake, alternating between emerald depths and shallow toasty-hued shorelines. It’s a favorite for the serene countryside vibe and diverse water sport activities. Water-sunken pagodas and beachside lounge chairs offer perfectly acceptable sights of the walking dock and lake activities. But the main attraction is the beautiful black dorados swimming like water ballerinas just below the surface on the lapping shoreline. 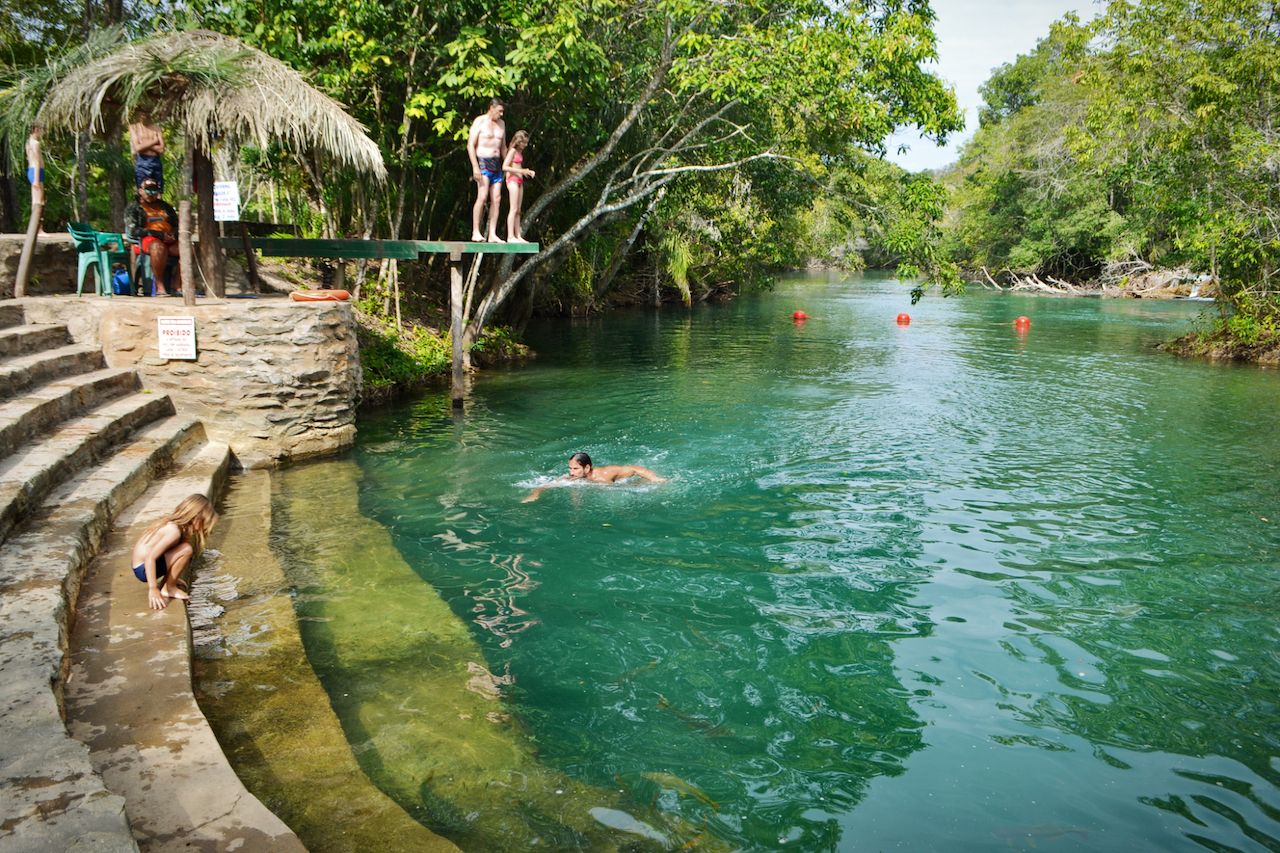 Balneario do Sol is something of an entirely different stroke, boasting grassy knolls alongside natural pools that mimic the ebb and flow of the passing lazy river. Resident capuchin monkeys hop to and from trees to picnic tables, leaning over the banks for a lick of drink beneath the waterfalls. The jungle-laden hideaway also offers playgrounds, a giant chessboard, zip-lining, and diving platforms for sinking beneath the surface of the bottle-green waterway.

WildlifeThe Pantanal in Brazil Is the Best Wildlife-Watching Spot in South America
Tagged
Diving National Parks Insider Guides
What did you think of this story?
Meh
Good
Awesome