Brazil is a vast country with jungles the size of small countries and a coastline that seems to go on infinitely. The food varies as widely as the landscape, each region specializing in its own dishes. Regional flavors overlap, like the fresh coconuts that are sold the length of the coast and the rice and beans eaten countrywide. Tropical touches, sweet desserts and candies, food that evokes centuries of international influence, and wild colors and shapes all scream Brazil.

When it comes to what the country eats, Brazil is a carnivore-friendly country, from São Paulo to Salvador. Vegetables are not always an important component of a dish with one exception: mandioca, or cassava. Or macaxeira, aipim, manioc, yuca (though not yucca) — the names are endless. Brazilians love this root vegetable, and many legends tell stories of cassava, naming it a savior against starvation. The Portuguese and Spanish spread the indigeous Brazilian crop to Africa and the tropics where it now accounts for a significant portion of the diet. 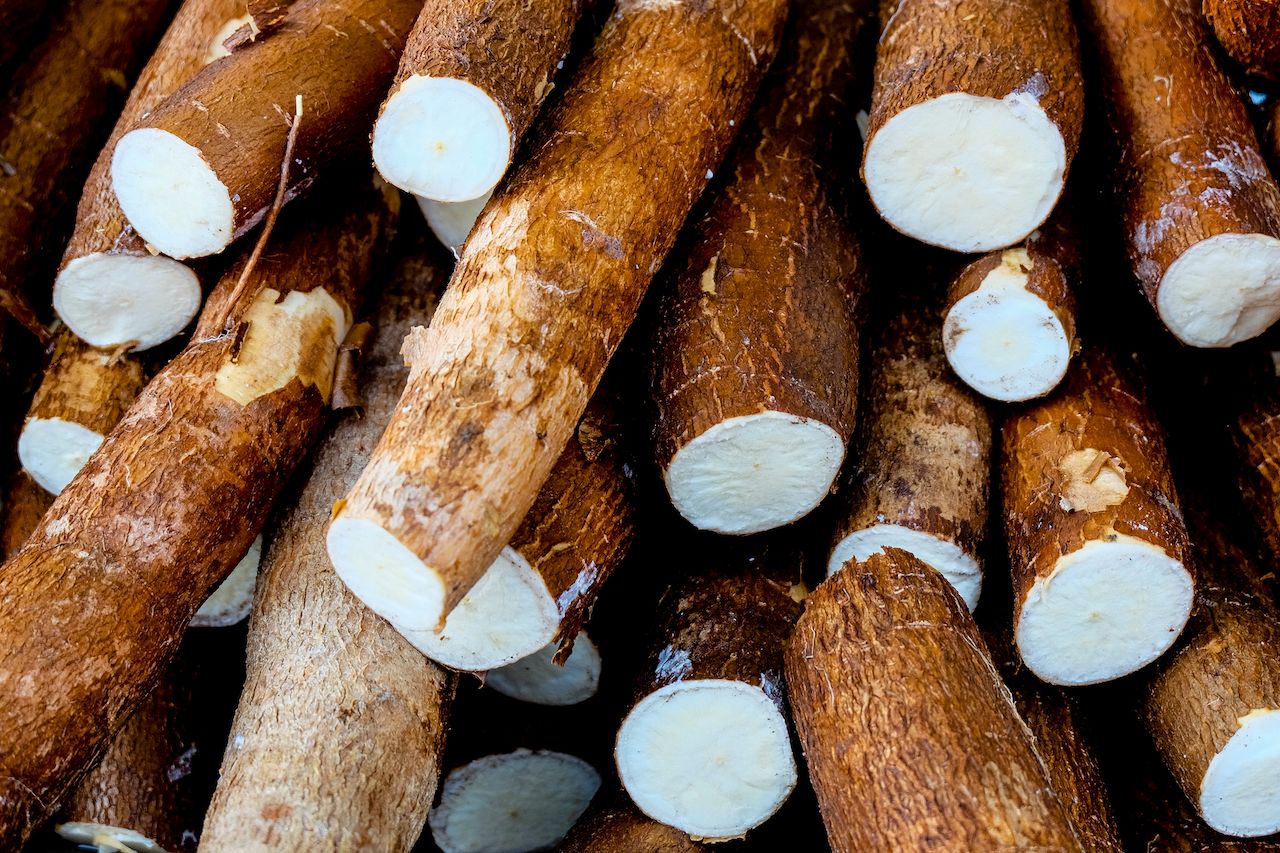 Cassava has many benefits; it’s highly adaptable and can grow in drought regions. It’s carb-heavy and nutritious, and it’s the third-largest source of carbohydrates in the world for humans. Plus it’s gluten-free. Proper preparation is key as cassava contains the poison cyanide to protect it against parasites and diseases. Removing the poison can be done by peeling the cassava, then soaking, cooking, or fermenting it to eliminate risks.

Cassava is not especially appealing by purely physical characteristics, but the flavors that lie under its thick skin come alive through a number of versatile preparations. Cassava is often boiled, fried, or toasted, and it’s served both savory and sweet. It can be sprinkled on other foods as seasoning, or it can be the star of the dish.

Be it a spontaneous trip to Brazil for some beachfront cassava fries or a visit to a tropical restaurant, you will not be disappointed with the flavors you discover. Nutritionally dense and easily adaptable, cassava has played a large role in diets across tropical countries. When the time for a journey to Brazil is right (which is now, for US travelers who no longer need a visa for a visit), you’ll see that an authentic culinary experience undoubtedly involve cassava.

The best cassava dishes in Brazil 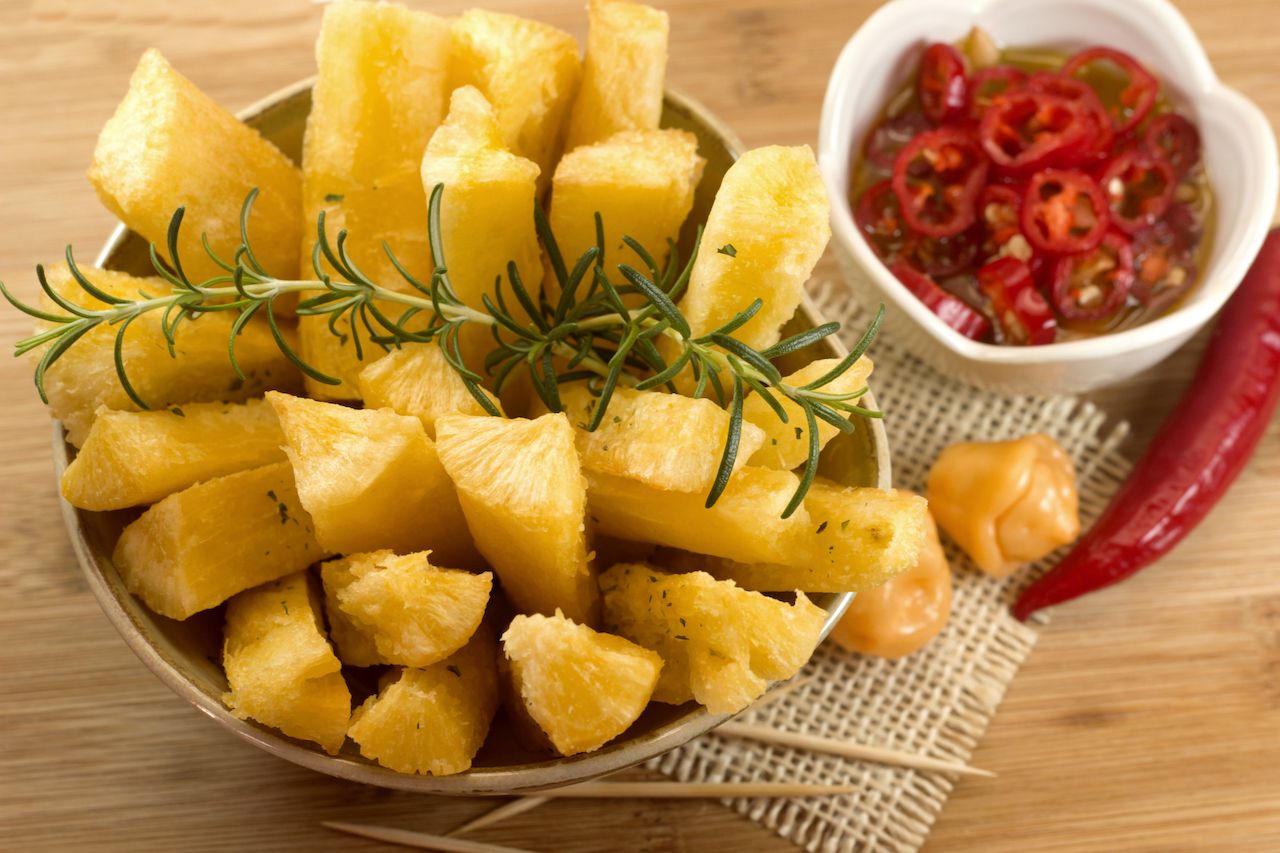 Not to be confused with the potato variety, cassava fries have a crunchier texture — making them extra hard to resist. The taste is lightly sweet and similar to French fries, and Brazil’s cassava fries are similar to the yucca fries served in Cuba and other Caribbean islands. The fries can be had as a snack at a beachfront shack or served as a side for a main dish. While the carb-rich snack isn’t exactly healthy, it’s always a good time for cassava fries. 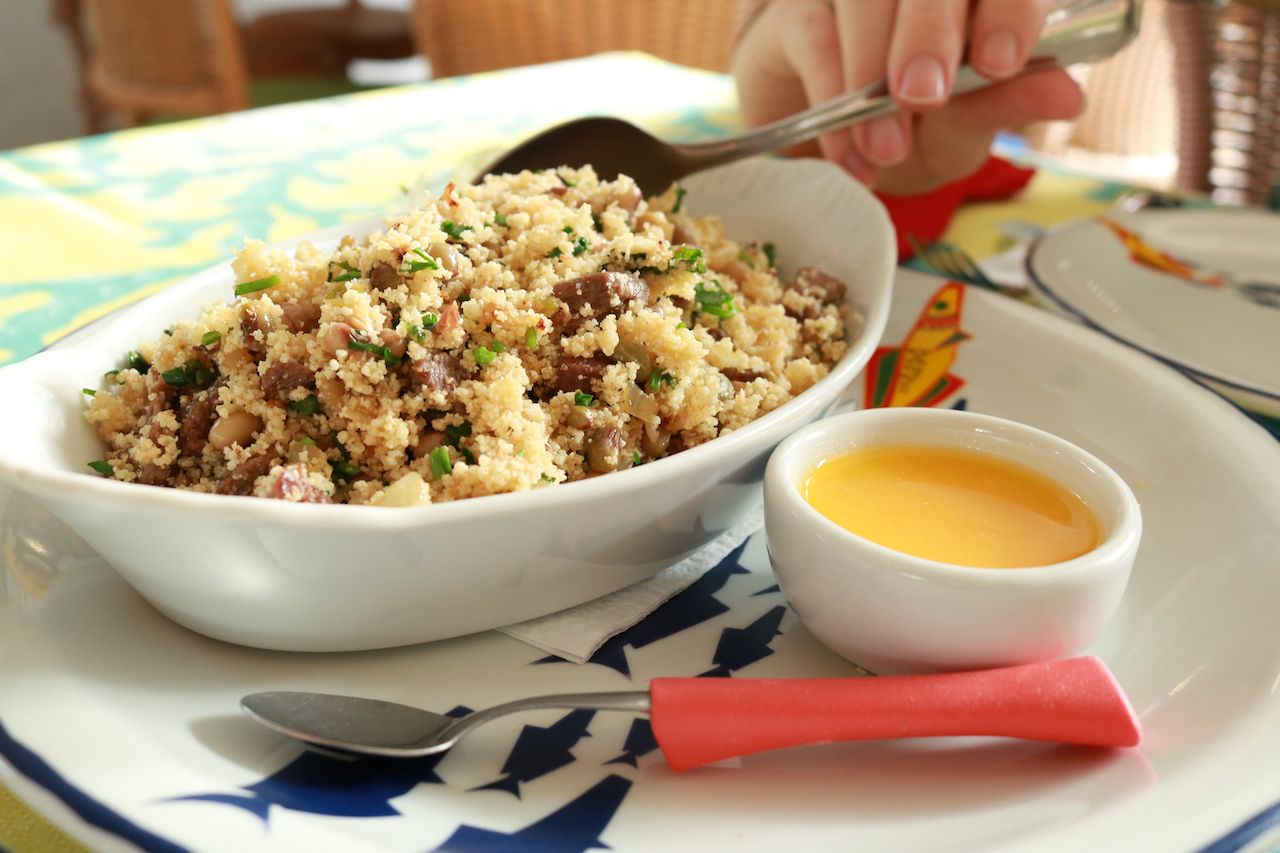 Farofa is a gluten-free cassava flour that’s toasted in a pan with oil, spices, and sometimes additional ingredients like chopped vegetables or meat. It has a similar appearance and texture to seasoned breadcrumbs and is typically sprinkled on a dish to season and add texture but can also be eaten alone. Each region has its own blend of seasoning, always considered the very best version by their locals. 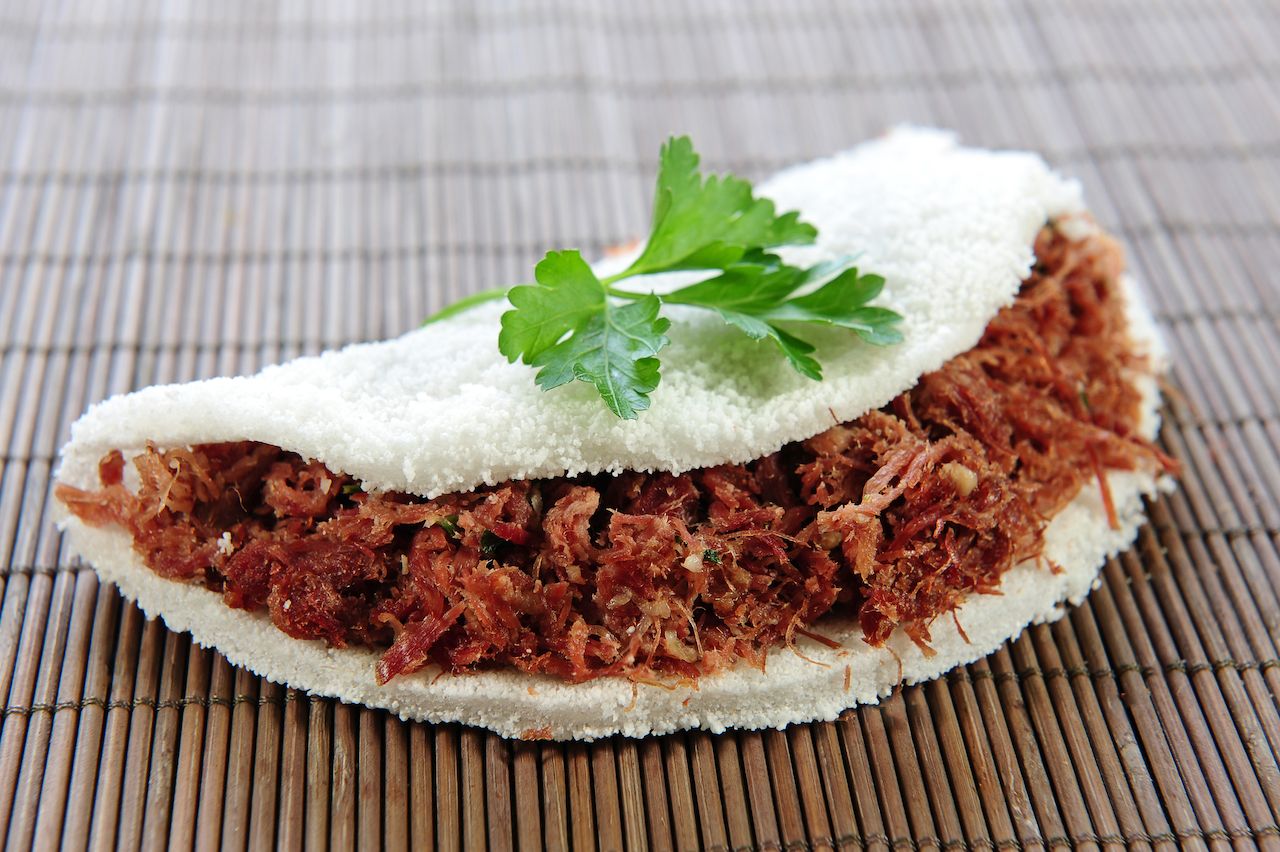 Brazil’s answer to crepes and tacos is the popular street food tapioca, made from the starch of the cassava root. It’s first moistened and passed through a sieve as a coarse flour, then sprinkled on a hot pan. The heat makes the starch bind together, resulting in a grainy flatbread. It can be buttered for breakfast like pancakes or filled with sweet or savory ingredients as a snack. Some favorites toppings are carne do sol (sun-cured meat) and Romeu e Julieta (guava paste and cheese). A Brazilian tapioca that could also swap in as dessert is one that comes filled with a sweet coconut mix. 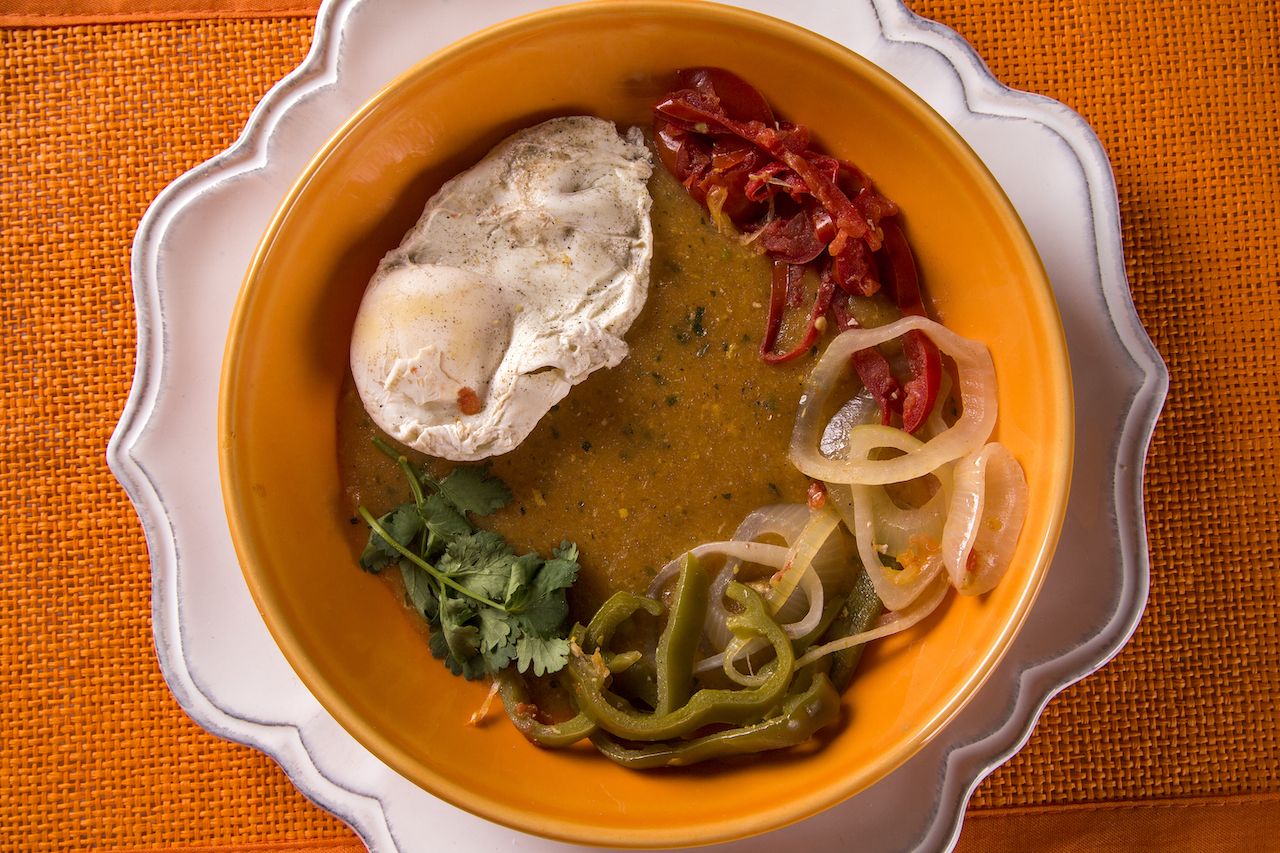 Often an accompaniment for seafood dishes in the north, pirão is a porridge-like substance made from cassava flour and broth. Generally, seafood broth is used, and the puree is served alongside shrimp or fish. Although the thick texture can be off-putting for some, the flavors from the broth provide a nice complement to many dishes. 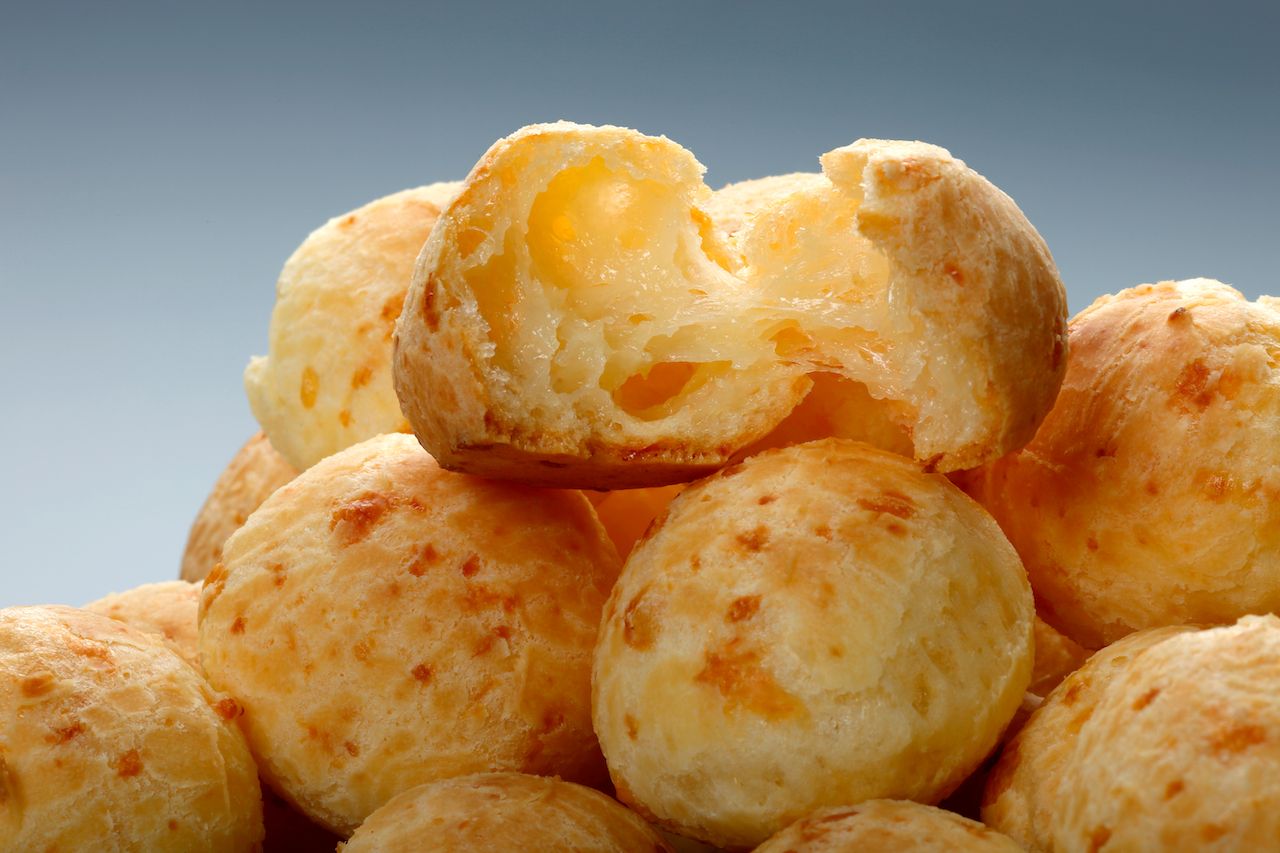 One of Brazil’s most famous snacks is pão de queijo, which translates literally to cheese bread. Cassava flour and cheese are the main ingredients of these little rolls, which vary in size, flavor, and texture around the country. Generally eaten for breakfast or as a snack with coffee, pão de queijo can be found sold at street corners. Pão de queijo is so ubiquitous, you’ll even find it in Brazil’s local Starbucks cafes. The cassava flour makes this unleavened bread somewhat elastic, setting it apart from wheat bread.

Dessert8 Sweet, Fruity, and Savory Brazilian Desserts You Need in Your Life
Tagged
Food + Drink Vegetarian Brazil São Paulo, Brazil
What did you think of this story?
Meh
Good
Awesome