On January 1, 2019, right-wing politician Jair Bolsonaro will be inaugurated the new president of Brazil. That is bad news for the planet.

Bolsonaro, an admirer of President Trump, has called climate change a hoax, says efforts to curb deforestation of the Amazon — which provides over 20 percent of the world’s oxygen — are funded by foreign powers aiming to halt Brazil’s economic development, and wants to lift protections for the indigenous peoples who live in the rainforest.

Bolsonaro also abruptly canceled Brazil’s plans to host a UN-sponsored climate change summit next year. I remember feeling proud when my home city, Rio de Janeiro, hosted the first major UN Earth Summit many years ago. To see the country I love forfeit any shred of environmental leadership is distressing.

Just last week, Bolsonaro nominated a pro-business climate skeptic, Ricardo Salles, as his incoming Minister of Environment. When Salles was Environment Secretary for São Paulo state, he was accused of illegally redrawing maps to open environmentally protected areas to mining.

With all the bad news, what can we as concerned travelers do? The temptation might be to boycott any travel to Brazil to register our disapproval. But that’s not the solution.

“Do not boycott Brazil,” says Ana Paula Pessoa, a Brazilian entrepreneur who was CFO of the 2016 Summer Olympic Games in Rio de Janeiro and is a board member of The Nature Conservancy in Brazil. “That would be worse.” 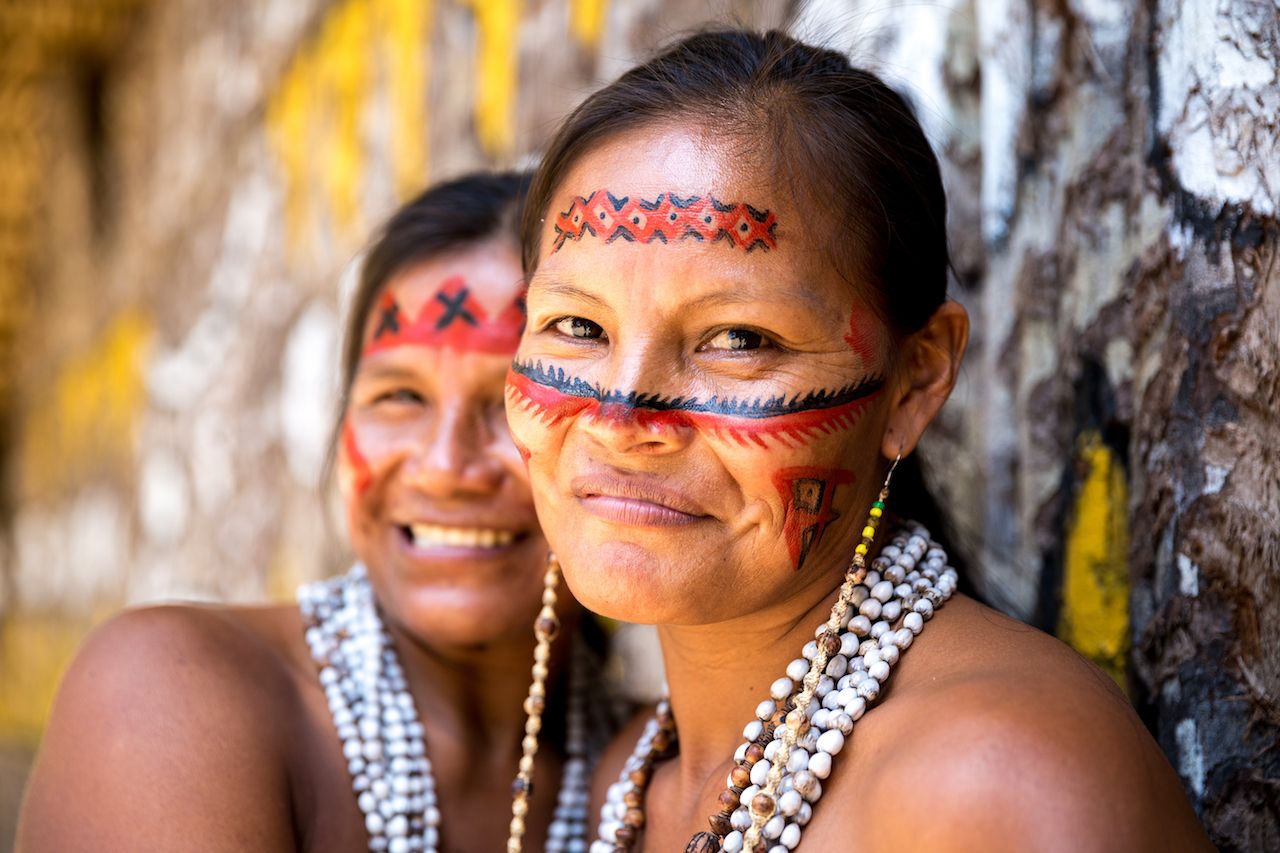 As Pessoa explains it, indigenous communities in the Amazon are under threat from developers who want their land for cattle ranching and agribusiness — and they need viable alternatives. Tourism that brings cash, and supporting those communities will be more valuable than a boycott.

When you travel to the Amazon, “You’re supporting local communities that need [tourism] desperately,” she says. With economic options that keep their ecosystems intact, those communities can better avoid turning their land to agriculture or selling it to speculators.

Ian Thompson, Conservation Director at the Nature Conservancy and based in the city of Belem at the mouth of the Amazon River, agrees with Pessoa.

“Tourism is increasingly an option in the sustainability agenda. Indigenous people are really becoming open to tourism,” he says. But if tourists boycott Brazil in eco-protest then “… those enterprises will fail. And people who want to convert the area to agribusiness will say there are no viable alternatives.”

Use your digital voice. 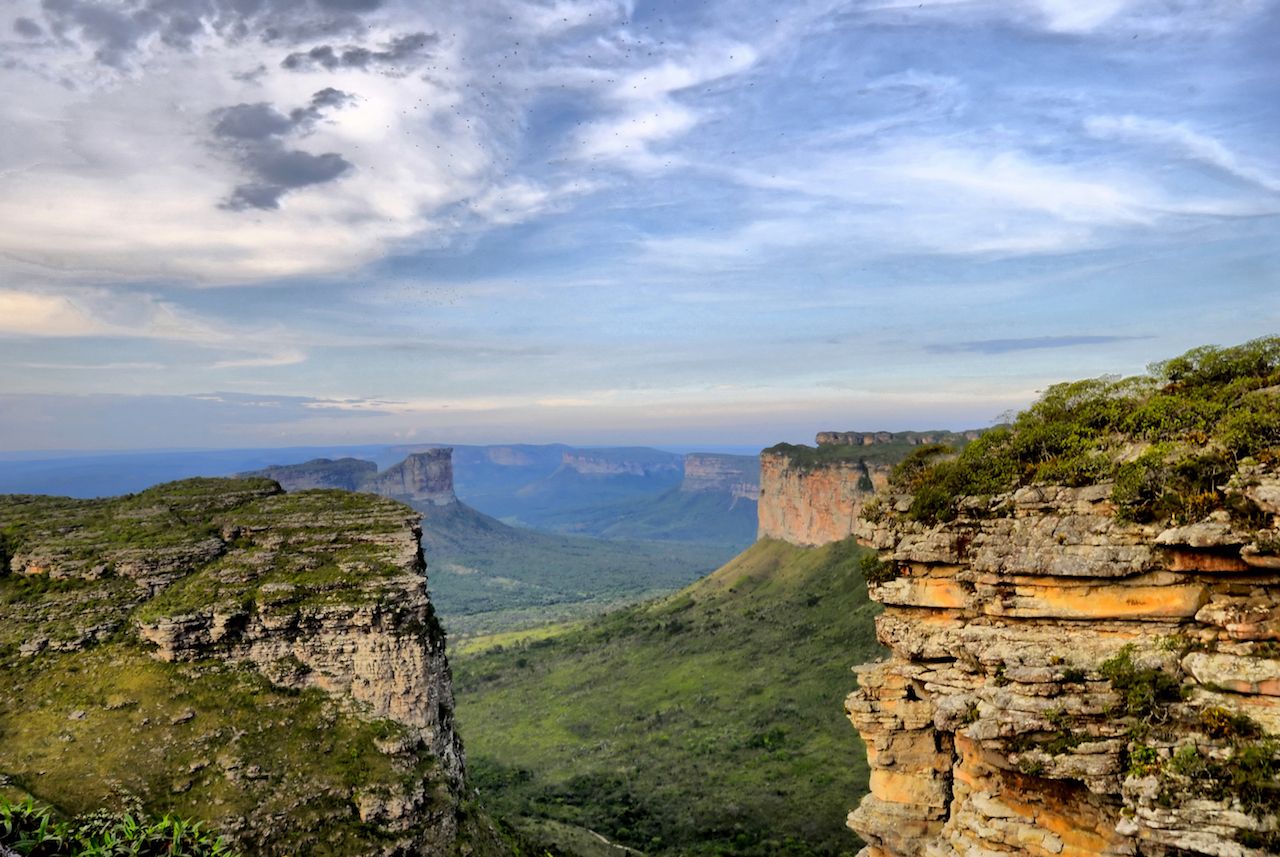 For travelers, Thompson takes things a step farther. It’s not just about spending your travel money somewhere that supports communities living in natural areas but also using your voice, he says.

“Tourists have a voice that they didn’t have before. They have a digital voice,” he says. “People should be conscious of using it.” Travelers who post photos of natural areas can help elevate appreciation of those places, says Thompson. That’s sorely needed in Brazil.

In fact, Brazil’s economic crisis of recent years means that more Brazilians are traveling within Brazil. Rather than taking pricey trips to US cities like Miami and New York, Brazilians are visiting places like Chapada Diamantina National Park, a stunning reserve in eastern Brazil with mesas to rival anything you’ll find in the southwestern US but much lusher — with waterfalls, monkeys, anteaters, and abundant flowers. The hope is that Brazilians will place more value in these areas.

Another beautiful place is the Mamirauá Sustainable Development Reserve, 4,300 square miles in the state of Amazonas that make up Brazil’s first nature preserve — set up after years of lobbying to protect a rare endemic monkey. Previously a “no-go zone,” it’s now slowly opening up to visitors, says Thompson — with multi-day tours and accommodations options like the Ucari Lodge.

Thompson also points to projects run by the Instituto Socioambiental to help indigenous people create their own community tourism in the rainforest. A third option is tourism developed by indigenous communities themselves. Some local tribes are opening up to controlled, limited visits from outsiders and are managing this process themselves.

Embrace all of Brazil’s natural beauty — not just the Amazon. 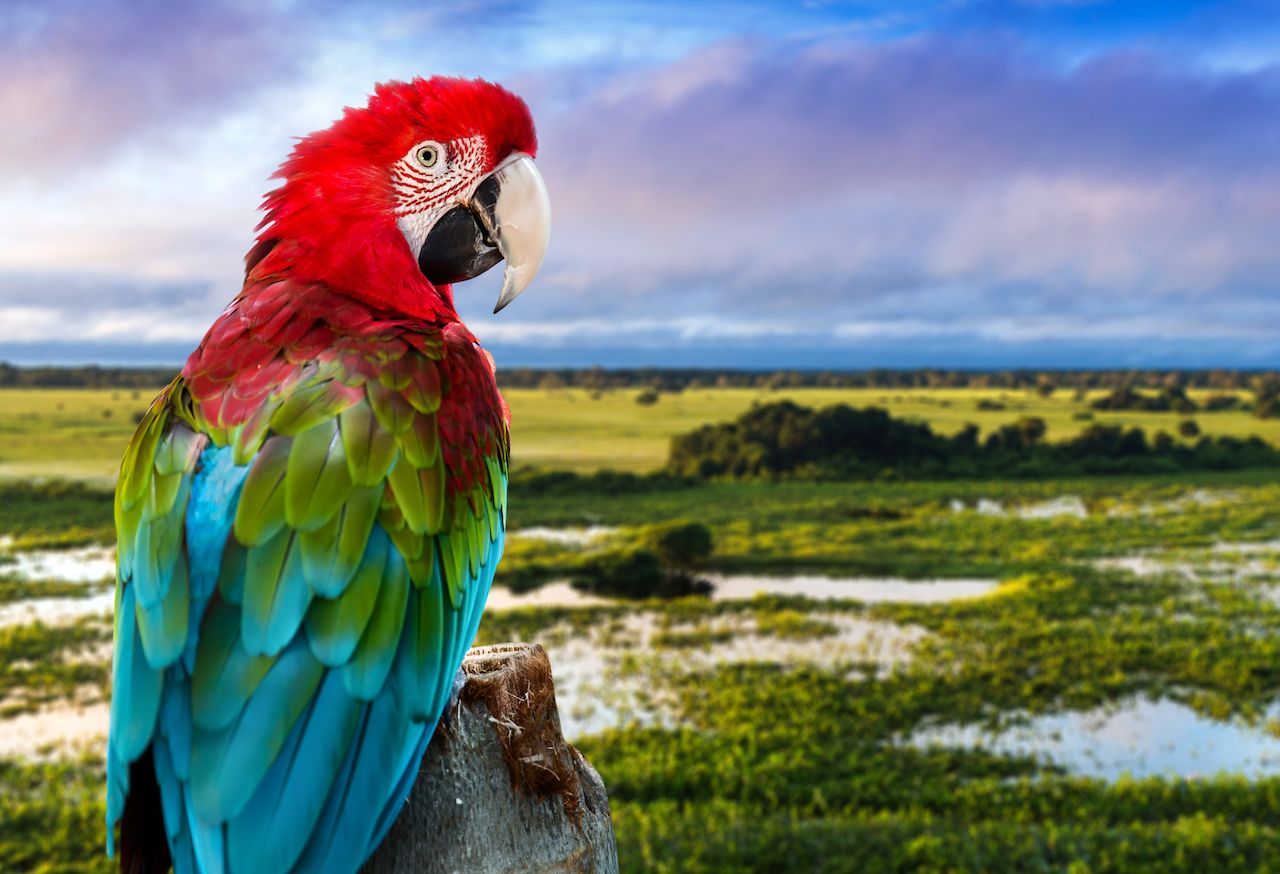 Of course, not everyone wants to travel deep into the Amazon, nor should they. The rough conditions are not for everyone, and it’s extremely dangerous to travel into the rainforest without a respected organization. Indigenous groups are wary of outsiders, with good reason. For decades, land speculators have been murdering local peoples. With the new president’s apparent disdain for Amerindian cultures, those speculators may feel they can kill with impunity. Naïve tourists could find themselves in the wrong place at the wrong time.

However, there are plenty of alternatives. Donald Sawyer, a senior advisor for the Brazilian Institute for Society Population and Nature, recommends staying in the Amazonian cities of Manaus or Belem. “You’ve got international airports and good hotels. The rainforest is right there.”

You can also stay at luxury accommodations in the rainforest like the Cristalino Lodge, which will take you on nature tours to observe some of the fauna, including monkeys, sloths, iguanas, brightly hued frogs, and well over 500 bird species. The Rio Azul Jungle Lodge and Pousada Thiamaçu are less pricey, but their focus is still on ecotourism and, located as they are on tributaries of the Amazon River, fishing.

But it’s not all just about the Amazon; all of Brazils ecosystems are under threat and in need of tourist support. These landscapes can be just as spectacular as the rainforest to visit — just without so many mosquitos.

Brazil’s massive interior savannah, which covers an astonishing 770,000 square miles, is critical to the Brazilian ecosystem, functioning as a conduit bringing water from the Amazon and the Atlantic to the rest of the country — for consumers, agriculture, and hydroelectric power.

Because that savannah, Brazil’s “Cerrado,” is a mix of forest and different landscapes, it’s a lot easier to plant soybeans there, and it’s been much more severely degraded by agribusiness than the Amazon. Travel to places like the Pantanal can promote interest in these areas as natural reserves, not as corn fields.

Be a conscious consumer. 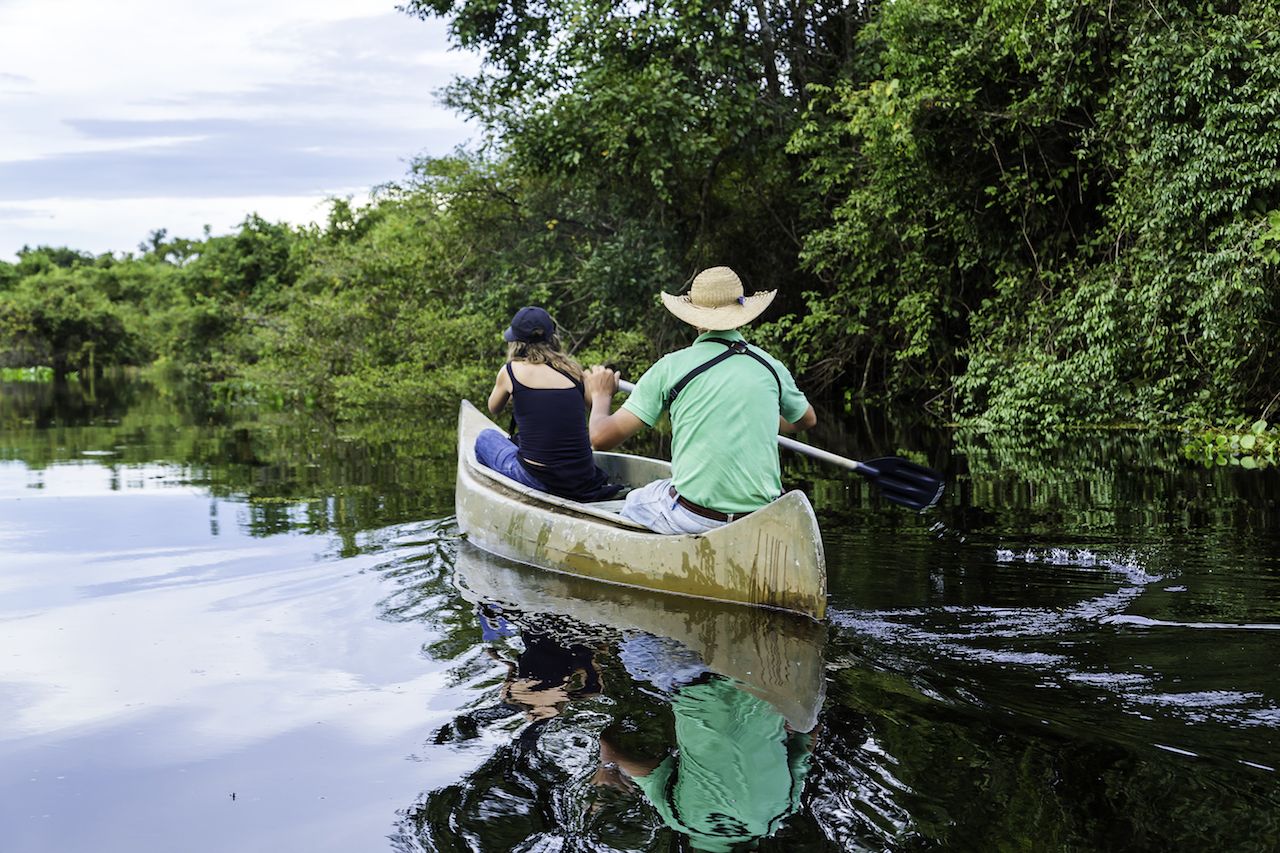 Sometimes, though, boycotting something you disapprove of just feels right — so be a conscious consumer and boycott beef, soy, and other agriculture products that have been grown on recently cleared land. Several wholesalers and retailers have responded to concerns from consumers in the US and Europe and refused to buy such products, says Sawyer. Their focus has been largely on products from the Amazon, though, and should also include those from the Cerrado, he adds.

As a traveler, you’re a consumer as well, and you need to be careful about how you do it. If you do opt to travel to Brazil’s threatened areas — both to show your appreciation for them and to bring local communities your tourism dollars — do it sensitively.

“It’s a double-edged sword,” says Thompson of the local communities who opt to open themselves up to tourism. The money helps them turn away land speculators, but it also threatens their traditional way of life. It’s important to do your research here.

Thompson sums it up like this: “Don’t boycott Brazil. Be conscious in your choices, and seek out organizations that support the communities you care about.” He also reminds us again to use our digital voices when we represent our experiences in Brazil’s incredible natural beauty.

So start planning your trip… and, when you get there, take a lot of pictures.

WildlifeThe Pantanal in Brazil Is the Best Wildlife-Watching Spot in South America
Tagged
Activism Sustainability Brazil
What did you think of this story?
Meh
Good
Awesome