“NOELLE, DENDÊ OIL is a sacred liquid,” Brazilian chef Isis Rangel messages me, in Portuguese, moments after we’ve hung up the phone. “I forgot to tell you that.”

I’ve just been speaking with Rangel about the brilliantly red oil used in the African-inspired cuisine of Brazil’s northeastern state of Bahia. Rangel is head chef at Sabores de Gabriela, which specializes in Bahian food, but is located further south — in the city where I lived growing up, Rio de Janeiro.

Rangel wants to be sure I’ve understood the spiritual significance of this pungent palm fruit oil, but she needn’t worry. She’d made that clear in speaking about dendê’s role in religious offerings. She’d also underlined the central place of dendê oil, or “azeite de dendê,” in the complex, spicy, and rich cuisine of Bahia. 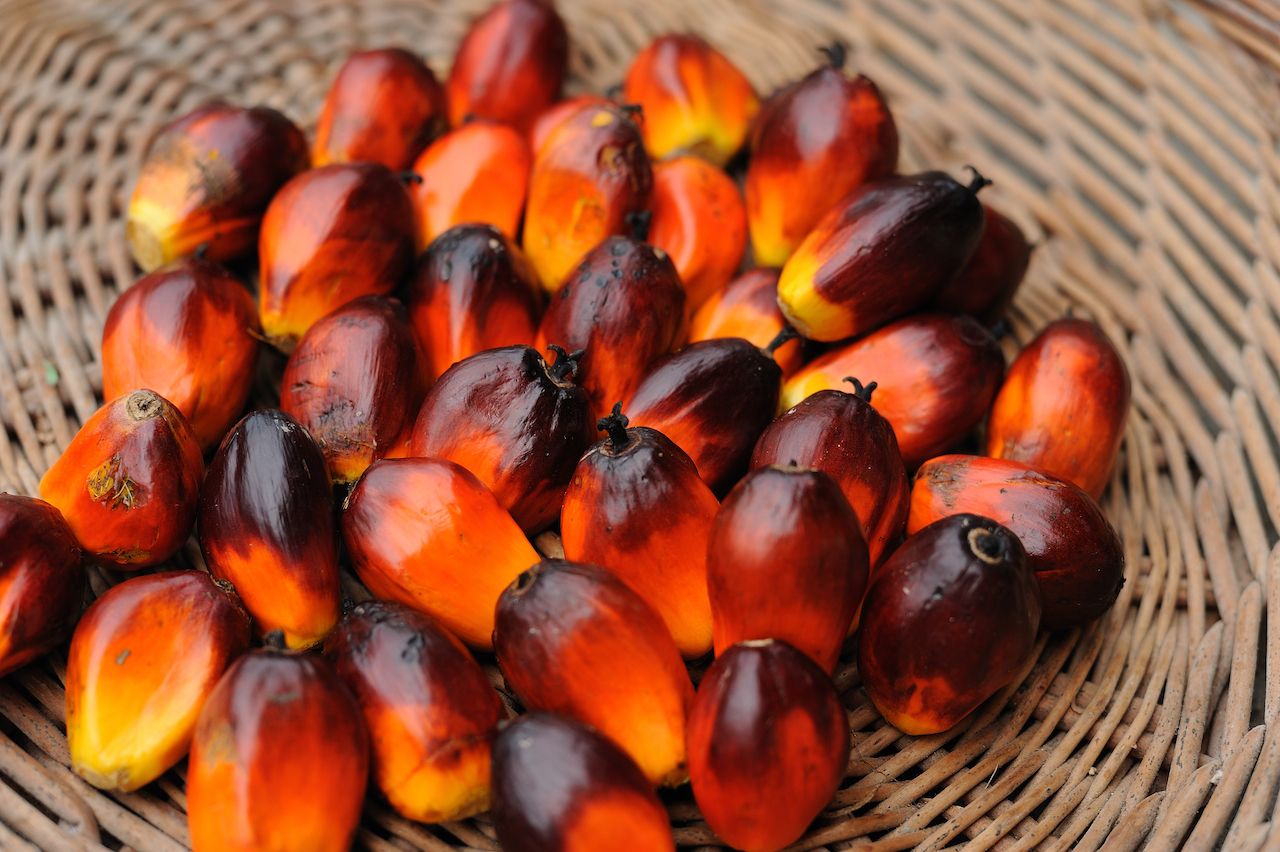 “All Bahian cuisine, basically along the coast, takes azeite de dendê,” says Rangel. “It’s a cuisine recognized in the entire world. It’s delicious, with an intense flavor, and azeite de dendê gives it the special touch — in its color and its taste.”

Dendê oil is produced from the tiny, blushing coconut of the dendezeiro, a palm tree named after its prized liquid confection. The small coconut — shaped like a Brazil nut — can fit in the palm of your hand.

To translate dendê oil into “palm oil” isn’t correct, since palm oil is generally made from the seed of the coconut. Dendê oil, on the other hand, is made from the fruit, drawing its distinctive hue from the fruit’s burnt-orange flesh and from its glossy skin, which is tinted orange, cherry, and deep crimson.

The origins of dendê oil

It’s unclear when the seeds of the Elaeis guineensis tree, the scientific name for a dendezeiro, were brought from Africa to Brazil, but accounts believe it could have been as early as the 1500s. Regardless, by the 1600s, visiting European naturalists confirmed that groves of healthy dendezeiros were growing in Bahia. Some Brazilian historians argue that the trees were transported by colonists for commercial uses, while other researchers say the seeds were brought by the African people themselves, who arrived in Brazil against their will.

From 1510 to 1866, Portuguese colonizers brought to Brazil a staggering five million enslaved people, or over 40 percent of all the African people subjected to the trans-Atlantic voyage to the Americas. One-quarter of those five million were taken to Bahia, and many came from the same region of West Africa near present-day Benin. As Rangel notes, they brought with them their culinary and religious traditions.

And they cooked with the oil of imported dendezeiro trees that flourished in Bahia’s humid, tropical environment. Rangel explains that dendê oil was necessary to prepare the foods they used in religious offerings to their deities, or orixás. Orixás, still revered today in the Afro-Brazilian religion that’s emerged from the blend of varied African observances with locally imposed Catholicism, are considered spirits or ancestors subservient to a single, powerful god. 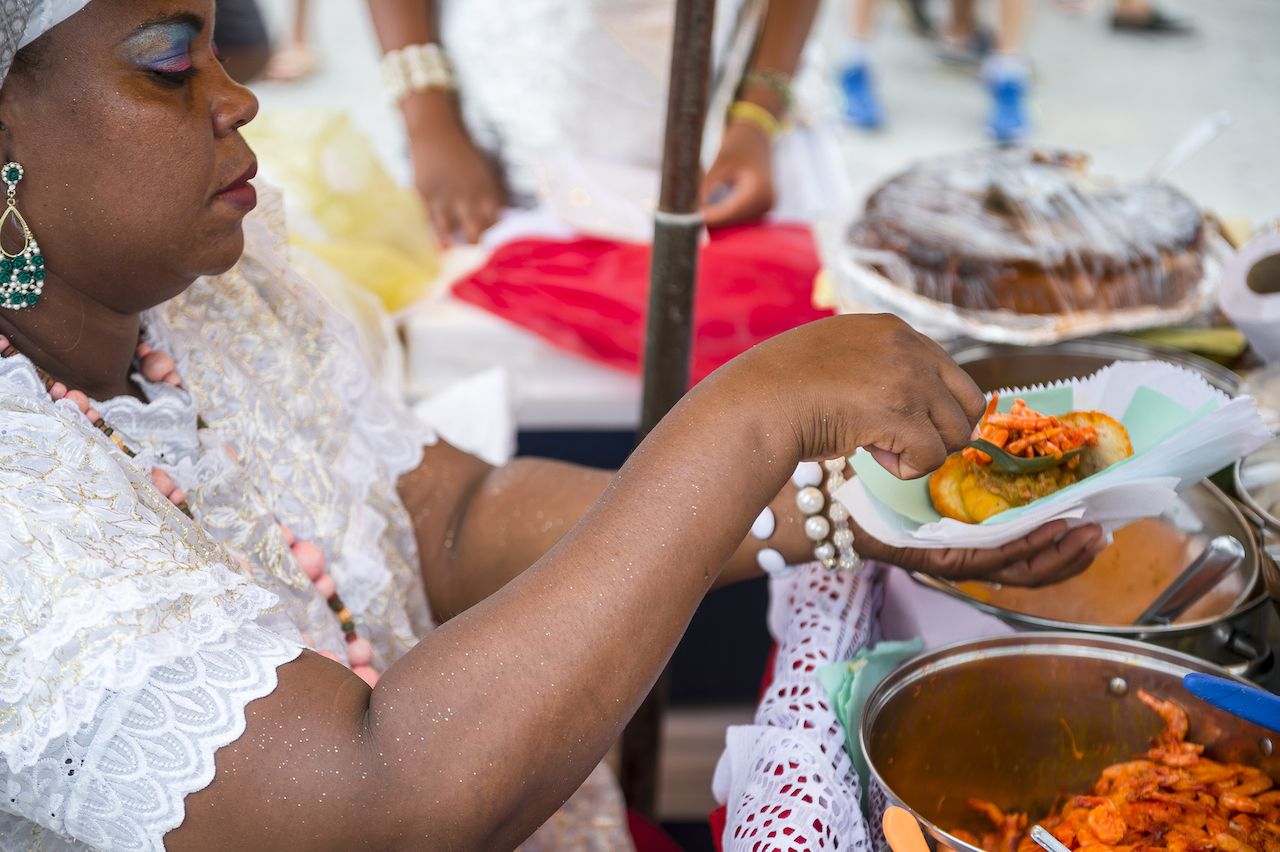 A typical food offered to the orixás was acarajé, an avocado-sized fritter made from ground bean flour that’s the color of pale sand but that takes on an amber hue when deep-fried in dendê oil. Nowadays, says Rangel, acarajé is a daily ritual for residents of Bahia’s capital city, Salvador, and they’re prepared by women dressed in white dresses and headscarves known as Baianas.

“At the end of the day, the Baianas go to the street, set up their tables, and fry up the acarajés,” says Rangel of the scene in Salvador. “The aroma of the food, and the azeite de dendê, fills the air at four in the afternoon, and everyone comes out to eat their acarajés from their preferred Baiana. It’s a tradition.”

The crisp exterior of the freshly fried acarajé is split open, revealing a soft interior textured like fine cornbread. To the center are added shrimp and two pungent sauces. One is vatapá, made with cashews or peanuts, dried shrimp, coconut milk, and garlic cooked down in dendê oil; the other is caruru, made of okra, shrimp, and onions cooked in dendê oil. It’s served hot on plenty of napkins.

How to cook with dendê oil

While acarajé is a street food enjoyed every day, moqueca is the elegant Bahian dish served in some of Brazil’s best restaurants and, increasingly, abroad. It’s a lime-marinated fish baked inside a terracotta pot in a colorful mix of tomatoes, peppers, onions, garlic, cilantro, coconut milk, and dendê oil. Shrimp are also often added to the recipe, along with piquant chilis. 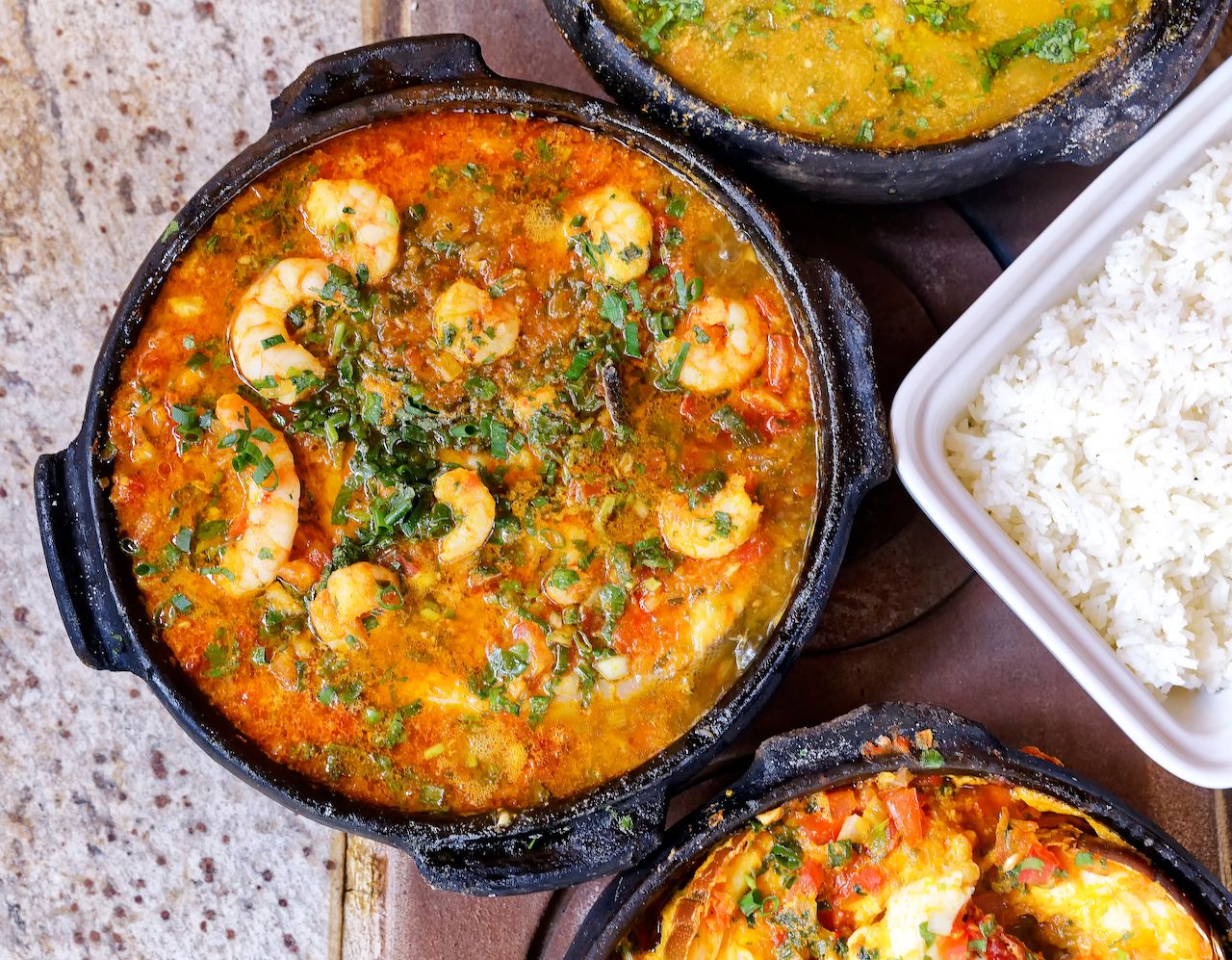 It’s the dendê oil that brings out the fish stew’s depth. If you’ve tried a moqueca in an inventive restaurant outside of Brazil and the hearty flavors didn’t linger in your mouth, there’s a good chance it wasn’t made with dendê oil. In fact, it’s hard to think of any dish cooked with dendê that isn’t rich with umami flavors.

“Nothing substitutes for azeite de dendê. Nothing,” asserts Rangel.

The most delicate and aromatic dendê oil is called the “flower,” captured from the top of the freshly processed oil. “It’s very transparent, but red and beautiful,” says Rangal of this oil. The remaining, much denser oil is called bambá, and it’s what’s used for deep frying the acarajé, given its higher burning point.

Despite the commercial success of palm kernel oil, the production of dendê oil from the palm fruit is still a low-tech affair, and its abundance isn’t assured from year to year, notes Rangal.

“We are just beginning to see a crisis of dendê oil. Why? Production in Salvador has diminished as a result of the climate, the lack of technological investment in the harvesting of the fruit,” she says.

When production is affected, supplies run low of an oil that’s still very much produced in a “handmade” way, says Rangal. And that has consequences for the people who depend on it for a living.

“The Baianas basically live from the sale of these delicacies,” says Rangal of the women who sell the acarajés streetside. “If the production of dendê oil is reduced or is missing, that’s a problem for them…. So for Bahia, dendê oil is fundamental to the livelihoods of the people who live off of that.”

“And for me too,” adds Rangal. “This is a Bahian restaurant, and I make exactly that food on the basis of dendê oil. So it’s tough for me as well in terms of cost and in terms of obtaining it.” Fortunately, so far this year, dendê has not been tough to source, and she’s grateful to be serving her well-loved acarajés, as well as dishes made with crab, pumpkin, and cassava — other ingredients used heavily in Brazil’s northeast.

As to the occasional difficulties in readily obtaining dendê, Rangal says she’s confident these issues will eventually work themselves out.

“I’m sure that all this will pass, and that we’ll be able to continue making our food the way it should be made,” says Rangal. “With azeite de dendê.”

Food + DrinkBahia Is the Best Place To Eat in Brazil. Here Are 9 Dishes That Prove It.
Tagged
Food + Drink Brazil
What did you think of this story?
Meh
Good
Awesome