Yogurt has been a part of what is present-day Bulgaria since long before modern borders were drawn. It’s believed that the first yogurts in the area came from nomadic tribes around 4,000 years ago when their milk fermented in animal-skin flasks. The Balkans have the proper bacteria and temperature to naturally produce yogurt, making it an important ingredient throughout the region’s history.

Today, yogurt (or kiselo mlyako as they sometimes call it in Bulgaria, meaning sour milk) is eaten around the world. But it was the Bulgarian scientist Stamen Grigorov who discovered the bacteria, lactobacillus bulgaricus, needed to turn the milk into yogurt. And it’s in the Bulgarian village of Studen Izvor where you’ll find the only yogurt museum in the world. No country lays claim to yogurt like Bulgaria does, and the best way to see for yourself is through all of the classic yogurt-laced dishes in the country. 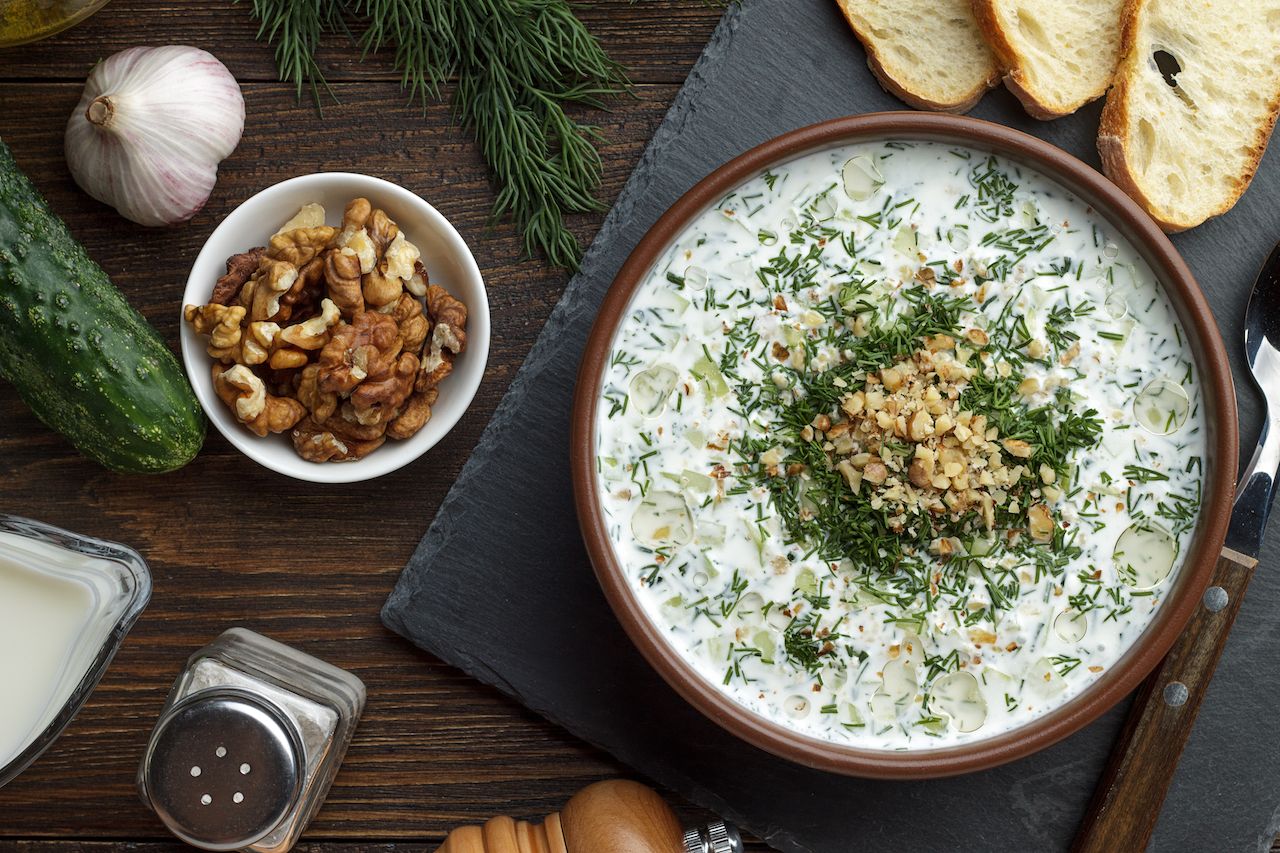 One of the first foods you’ll want to try in Bulgaria. Tarator is cold soup made from Bulgarian yogurt, cucumber, water, and other ingredients that’s somewhat like a gazpacho. In the past, the dish was served to people working in the fields, especially during harvesting season (this version is known as “harvester’s tarator”). You can find it made with Bulgarian yogurt around the country today thanks to the local love for anything with that special “sour milk.” Yogurt gives modern tarator its slight tang, and it’s cool and refreshing taste make it perfect on a hot summer day. 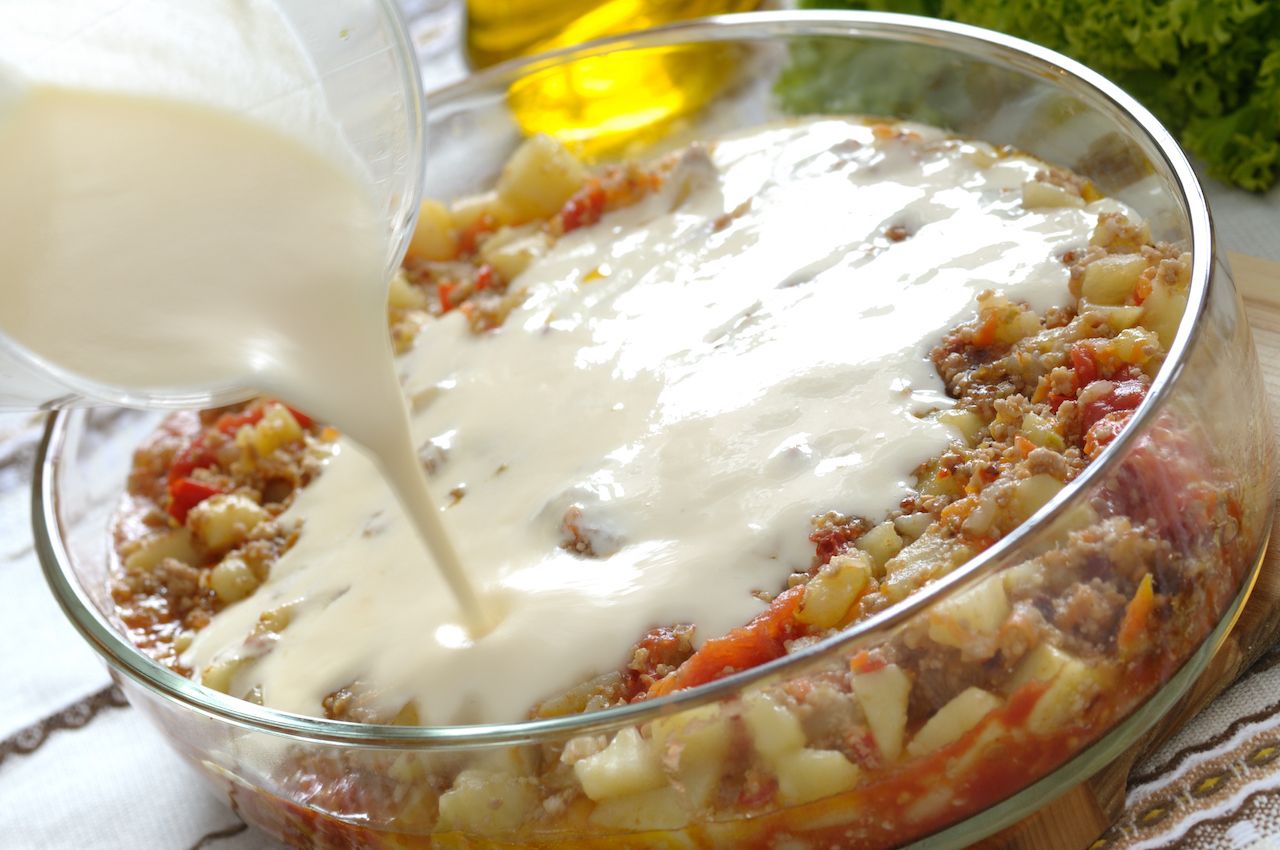 While a version of musaka is made in Greece and throughout the Balkans and Middle East, the Bulgarian recipe is on a different level. The base of the dish is minced meat and potatoes, usually with some carrots, bell peppers, and a lot of spices, but what makes it stand out is a topping made from Bulgarian yogurt, eggs, and flour that’s poured over the musaka a few minutes before it’s done in the oven. It’s served hot and topped with even more Bulgarian yogurt straight out of the fridge. The dish comes from the Ottomans who ruled parts of the Balkans from the 14th century up to the 20th century. 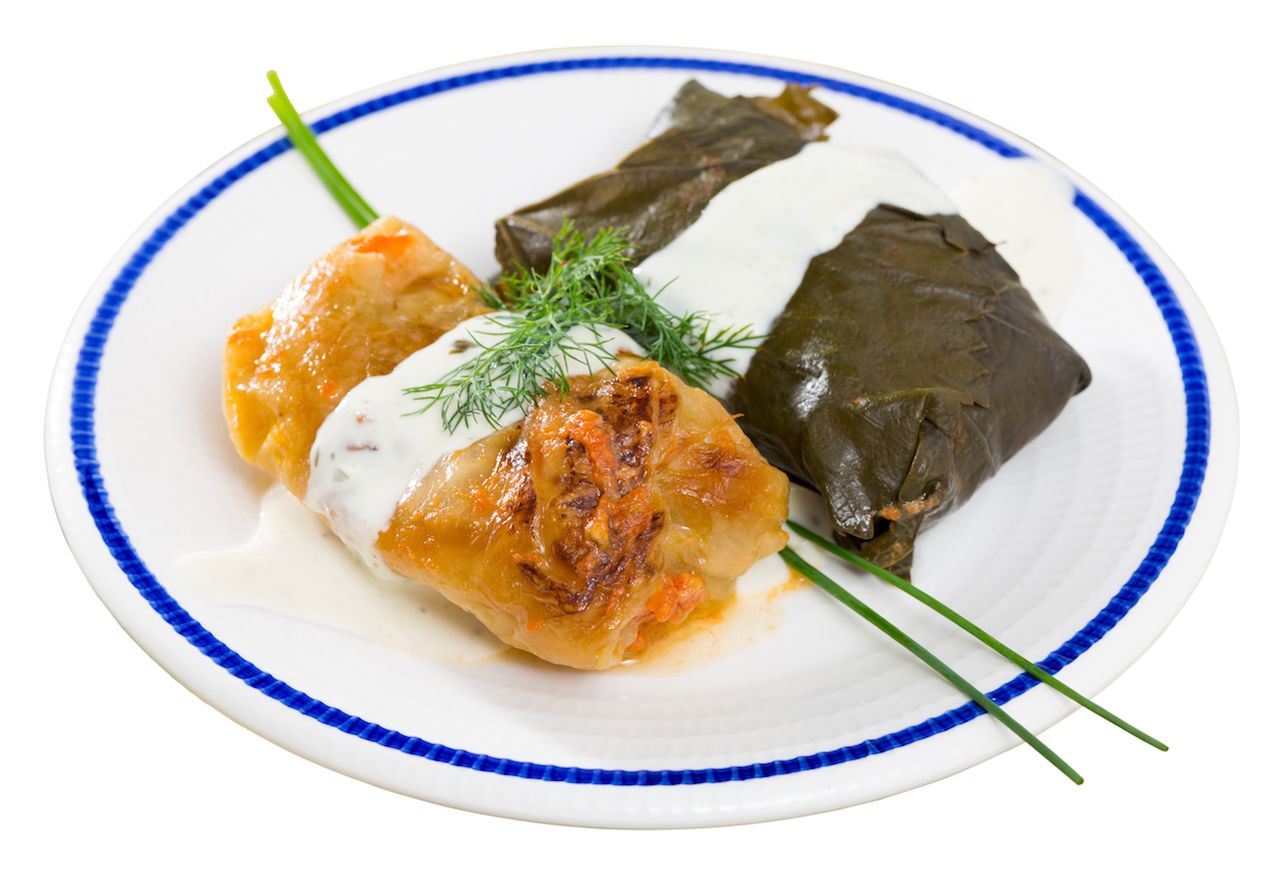 A true Slavic meal. Visitors to the Balkans, and especially Bulgaria, will be scolded for not having tried sarmas despite coming from a country where the dish is hardly known. Locals will go out of their way to fix that, so don’t be surprised if you get handed a Tupperware container full of strange-looking bite-sized leaf wraps. Sarmas are made with meat and grain that’s wrapped in zeleva (cabbage) or lozova (grape) leaves, and they’re inextricable from Balkan culture. No matter what the stuffing is or which leaf is used as a wrapping, they’re eaten topped with Bulgarian yogurt. Grape leaf and rice sarmas are vegan and have grown in popularity among the younger generation, especially around the holidays, but they absolutely require that special yogurt as a topping, otherwise the dish is considered incomplete. 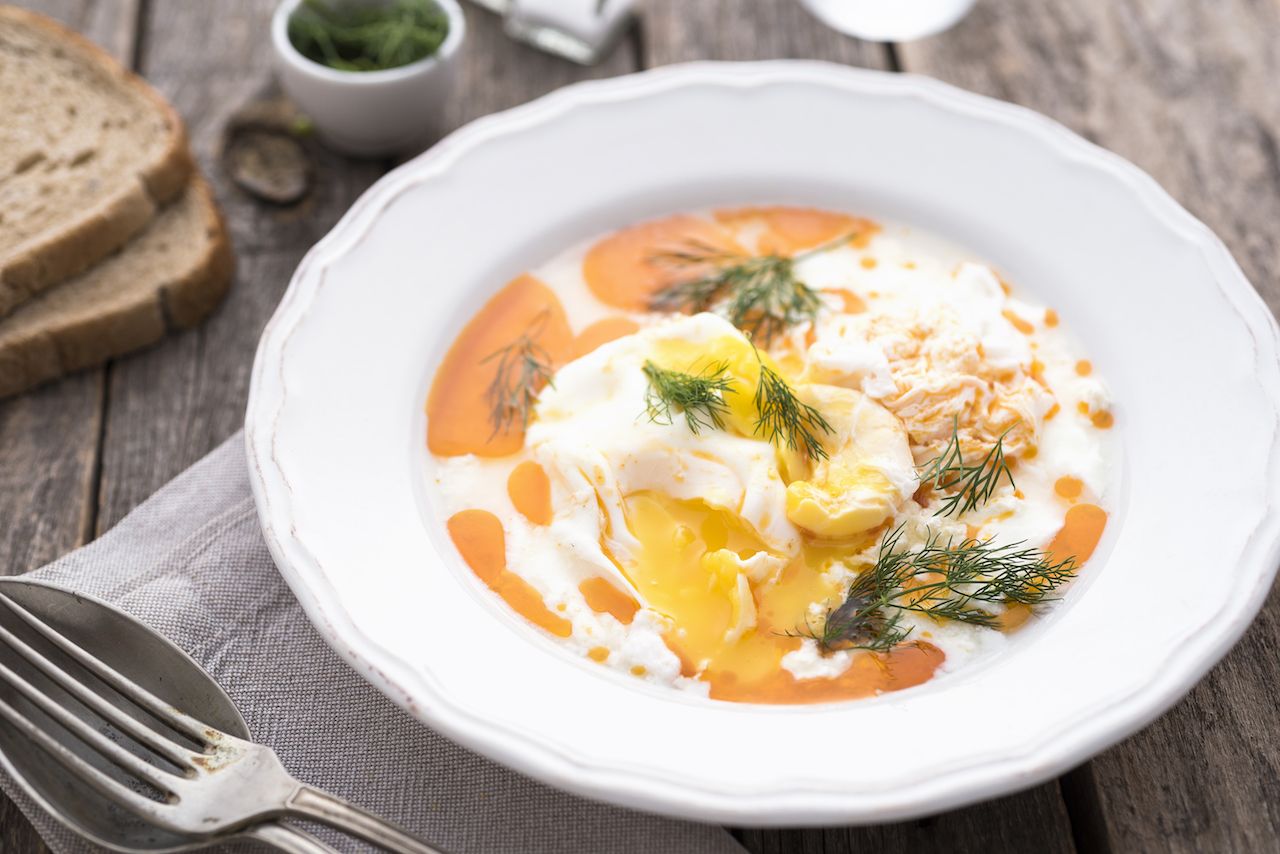 An extremely simple recipe yet amazingly tasty. Kiselo mlyako is mixed with garlic and spread in a deep plate. Cottage cheese is sprinkled over the top, making a nice bed for the three or four poached eggs that follow. Molten butter mixed with paprika is poured on top, and voila! This is a perfect breakfast dish, provided you have no trouble poaching eggs and have access to Bulgarian yogurt, without which the recipe simply doesn’t work. Panagyurishte is a town in Bulgaria, and the story goes that it was invented by a Panagyurishte woman as a way to greet and impress her son-in-law. The dish spread to the others in the town although no one knows exactly when or who first created it. One thing is certain, though: today, you can find yaitsa po Panagiyurski everywhere in Bulgaria. 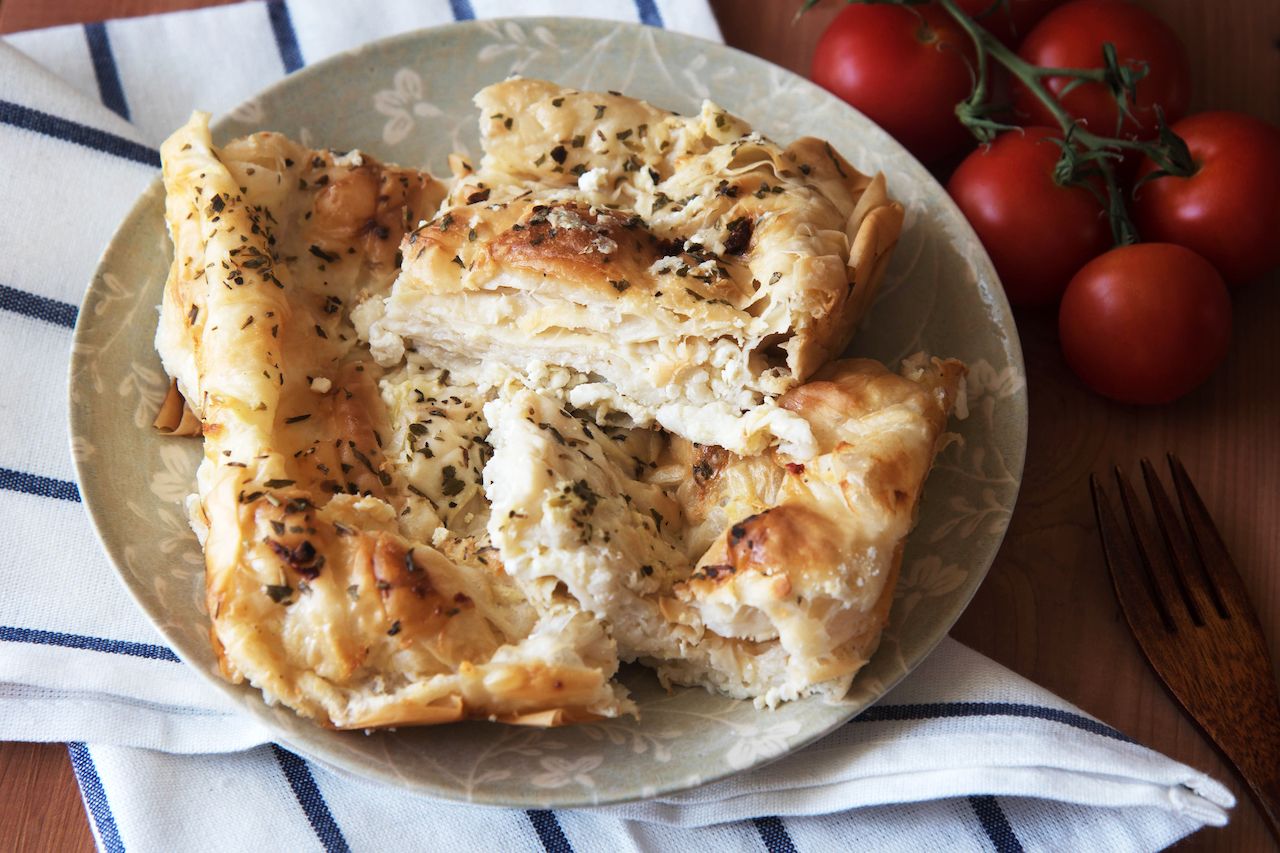 This, along with tarator, might be the most recognizable part of Bulgarian cuisine. Banitsa is prepared by layering filo pastry with eggs and cottage cheese and baking it in the oven. The result is a super crunchy, salty, and hearty pastry that can be eaten either hot or cold and is primarily served for breakfast in Bulgaria. On New Year’s Eve, it’s served with little dogwood branches hidden in the crust, and when someone finds the branches, they get to keep a charm that symbolizes health, longevity, and luck. Surprisingly, for a dish that has turned into a symbol for the nation and is present in almost all holiday recipe books in Bulgaria, there’s no knowledge of when or where it came from. And, of course, it’s not banitsa without a serving of kiselo mlyako.

Food + DrinkThe 7 Healthiest Cuisines in the World You Should Learn To Cook
Tagged
Food + Drink Bulgaria
What did you think of this story?
Meh
Good
Awesome