No matter how many people you ask in Durban, if you’re looking for bunny chow, those in the know will always mention Hollywood Bets.

Hollywood Bets is technically a betting shop. The gambling happens downstairs — a smoke-filled hall frequented by hopeful gamblers watching sports matches and horse races on TV. It is not the sort of place you imagine going for a family lunch. But upstairs, on a surprisingly pleasant wooden deck, diners young and old gather to munch on Durban’s most famous dish.

Bunny chow is a simple concept: a loaf of bread hollowed out and filled with curry. Utensils are optional, with the loaf itself, and the removed chunk of fluffy white bread — known as the Virgin — traditionally used to scoop out the contents.

The origins of bunny chow are a source of constant discussion. One story claims that Indian golf caddies, banned from carrying cutlery on the job during apartheid, invented the handheld dish to eat on the go. Another story suggests that 19th-century Indian sugar plantation workers in Port Natal used a hollowed out loaf of bread as a takeaway vessel for curry because they weren’t allowed to sit down in segregated restaurants. White bread became a substitute for chickpea and rice flour.

Though the original bunny chow was vegetarian, today the dish is usually made with mutton, sugar beans, or chicken, and seasoned with turmeric, masala, and coriander, among other spices. You order as a quarter, half or full — the latter being a family feast, or at least a dish for the exceptionally hungry.

Chowing down on a bunny (as it’s often nicknamed) is an essential part of any trip to Durban and it remains an affordable, unpretentious way to fill up. Seek it out at 24-hour takeout places, city center dives, or indeed, upstairs from a slightly seedy betting shop. 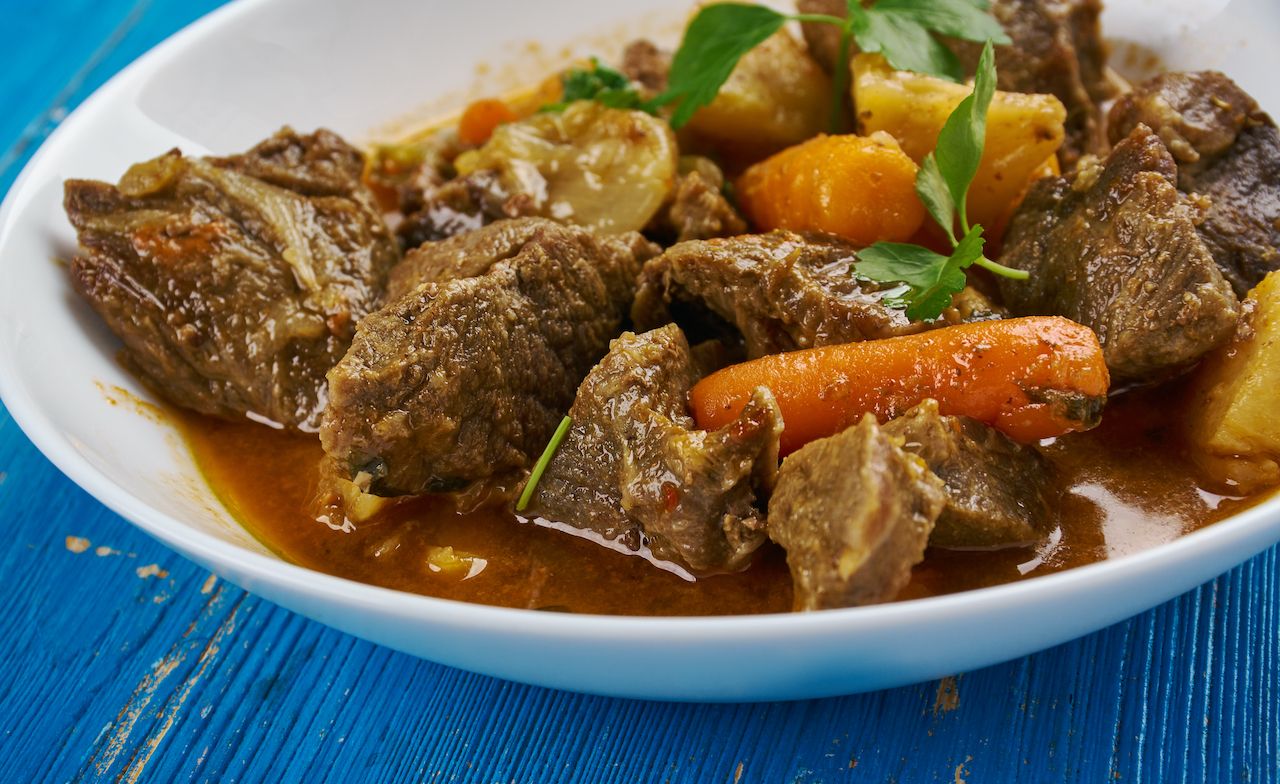 Some 1,000 miles southwest of Durban in the coastal city of Cape Town, another home-grown curry awaits the wandering gastronome. This dish too has its roots in East Asia, making its way to South Africa with a different group of immigrants, known as the Cape Malay people. The moniker refers to the enslaved Javanese people who arrived in South Africa in the 17th century, but the term has become a catch-all that includes slaves from East and West Africa and Madagascar, as well as Asia.

The resulting community has developed a rich and complex culture, and nowhere is this more evident than in Cape Malay cuisine. If you really want to get to grips with Cape Town’s home-grown cooking, you need to head to Bo Kaap.

Meaning “above the Cape,” Bo Kaap sits on the banks of Signal Hill. It is Cape Town’s most iconic — and most photographed — neighborhood. Abutting the city center, the houses in this predominantly Muslim quarter are painted in shades of fuchsia, turquoise, marigold orange, bright yellow, and vivid purple. Behind one such colorful facade you’ll find Lekka Kombuis, where Gamidah Jacobs gives half-day cooking classes in her family kitchen. In addition to spicy samoosas (the local spelling of the familiar Indian snack) , rotis, and chilli bites, you will also learn how to cook a classic Cape Malay curry.

The main difference between Cape Malay curry and its Durban counterpart is how it’s seasoned. The Cape Malay version can best be described as fragrant. Capsaicin heat is kept low, with flavors of cinnamon, cardamom, and clove taking center stage. Fruit and nuts sometimes make an appearance, and you’ll often find the dish served with a sweet fruit chutney and a side of sambals — a mixture of tomato, onion, sugar, and vinegar.

If you don’t fancy cooking your own, a few family-run restaurants in Bo Kaap specialize in Cape Malay cuisine. Try Bismillah for the classic bobotie, a lightly spiced mince dish topped with a savory egg custard, or Bo Kaap Kombuis for a tasting platter of three Cape Malay classics. It’s a bit of a hike to get there, but when you’re tucking into a dish that carries hundreds of years of history, a dish that is as rich in heritage as the Mother City itself, the steep walk to the restaurant is all just a part of the experience.