“What?! You’ve lived in Cape Town for eight years and never had a Gatsby?” My Cape Town born-and-bred companion was horrified that I had overlooked this staple of fast-food restaurants and food stalls. That would be like living in New York and never eating a hotdog, or spending eight years in Brussels and never having a waffle. To truly understand the culinary appetites of South Africans, you must give this sandwich a try.

The Gatsby is a colossal submarine-style sandwich that’s designed to be shared: a full Gatsby can easily feed a family of four — or two friends suffering with hangovers. Toppings can include anything like plain old polony to calamari, eggs, masala steak, boerewors (a lightly spiced beef sausage), or hot French fries It’ll be fried to perfection and often smothered with salt and vinegar.

Since its invention nearly 50 years ago, the Gatsby has come to represent the best of South African street food, bringing loved ones together over a messy, delicious meal.

The origins of the Gatsby sandwich

When it comes to seeking out the story of the Gatsby, all roads lead to Athlone, a rough-around-the-edges suburb south of Cape Town’s city center. The neighborhood is home to plenty of takeaways serving the giant sandwich, but there’s only one that claims to have invented it. Super Fisheries opens at 8:30 AM and by 10 the line is out the door. The aroma of fried food fills the cramped space and staff hurriedly serve their hungry patrons with practiced efficiency. The owner is Rashaad Pandy, undisputed creator of the Gatsby. He doesn’t have much time to chat, but he’s told his story so often that it doesn’t take long to run through the basics.

In the mid-1970s Rashaad hired a crew of laborers for some building work. “At the end of the day, I wanted to give them something to eat, but all I had was chips, polony, and atchar [Indian pickles], so I put it all together on a roll,” he recalls.

Upon taking a bite of the sandwich, a man known as Froggie proclaimed it to be a “Gatsby smash.” No one knows quite what he meant by this. Was he likening the sandwich’s success to the success of the then just-released movie? Or perhaps comparing the unhealthy excess of the sandwich to the excesses the book and movie are famous for? Either way, the Gatsby was born and since then it has become an identifying foodie symbol of Cape Town.

Where to find the best Gatsby in Cape Town 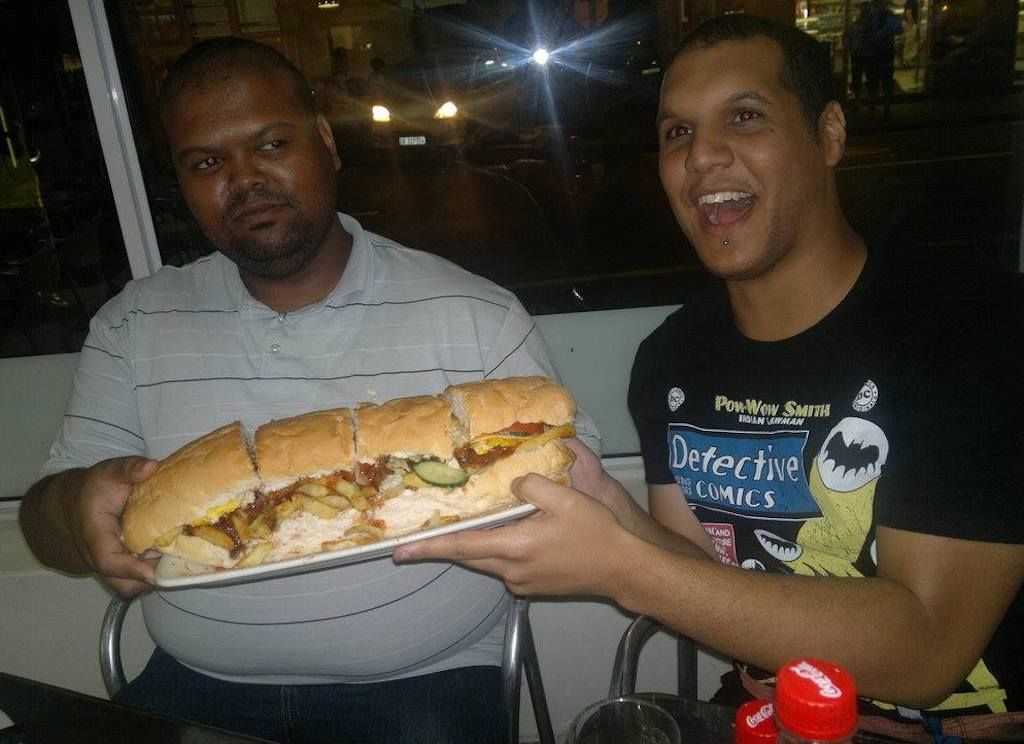 Super Fisheries is undoubtedly the home of the Gatsby, with one regular patron telling me that he’s seen people drive from all corners of the city to sample the “best chips in town.” But these days the family-sized sub is found throughout Cape Town, often in less affluent areas or at simple eateries surrounding train and bus stations, offering a quick and cheap way to fill up after a long day at work.

If you ask around though, you’ll find one name repeated over and over: Cosy Corner, located in Wynberg, a largely Muslim neighborhood about nine miles south of Cape Town. Cosy Corner has been in business for almost 45 years. The family-run eatery offers curries, burgers, and flame-grilled chicken, as well as huge Gatsby sandwiches to eat in or take away. Variants on the Gatsby’s traditional fillings including chargrilled steak and tandoori chicken. Even the local vegan movement is getting in on the Gatsby action. Plant-based diners can get their Gatsby fix at Lekker Vegan, just east of the city center.

The Gatsby has become an important part of local culture, a meal that originated in a small Cape Town community and has grown to represent the very spirit of ubuntu: a group of family or friends gathered around a communal dish sharing stories and smiles as they wipe the sauce from their chins.