“We always call ourselves the rainbow nation, and it’s like a rainbow of cuisine,” says Portia Mbau, chef and owner of The Africa Café in Cape Town. “South African food is quite diverse because not only are there Indigenous cultures — Zulu, Xhosa, Pedi, Khoisan — you also have the introduction of the Dutch, the British, the Muslims, the Cape Malay, and the Indian.”

Prior to colonization, indigenous groups in South Africa enjoyed cuisines that included flavourful stews featuring vegetables, beans, and legumes. Sorghum and maize were also essential to the South African diet. However, during the 1600s Dutch, French, and German settlers would arrive and bring their own cooking techniques and meats like sausages or biltong — similar to jerky.

In 1602, the Dutch East India Company began trading spices, including curry powder, chili, and nutmeg, as well as slaves from Indonesia, Malaysia, and the Philippines. Later on, British immigrants and indentured Indian labourers arrived in the 19th century making pies, puddings, and curries commonplace.

In South Africa today, you can find burger joints alongside tea salons and indigenous African eateries. Mbau — who is part Xhosa, part Zulu, and grew up eating Khoisan food — thinks that colonial attitudes about food have left an imprint on South Africa where Western cuisine is sometimes held in higher regard. She’s challenging that notion and has recently released The Africa Cookbook to showcase traditional African recipes.

“We’ve kind of downgraded our own cuisine, which means we’ve also downgraded our own values, our culture, and our own people. Food is not just food — it’s a whole culture,” says Mbau. “It’s so important. It’s a story that’s told through food.”

Despite a history fraught with racial tension, diversity contributes to the beautiful patchwork of cultural identities that make up South Africa today. So tuck into these eight iconic dishes to learn about the story of South Africa. 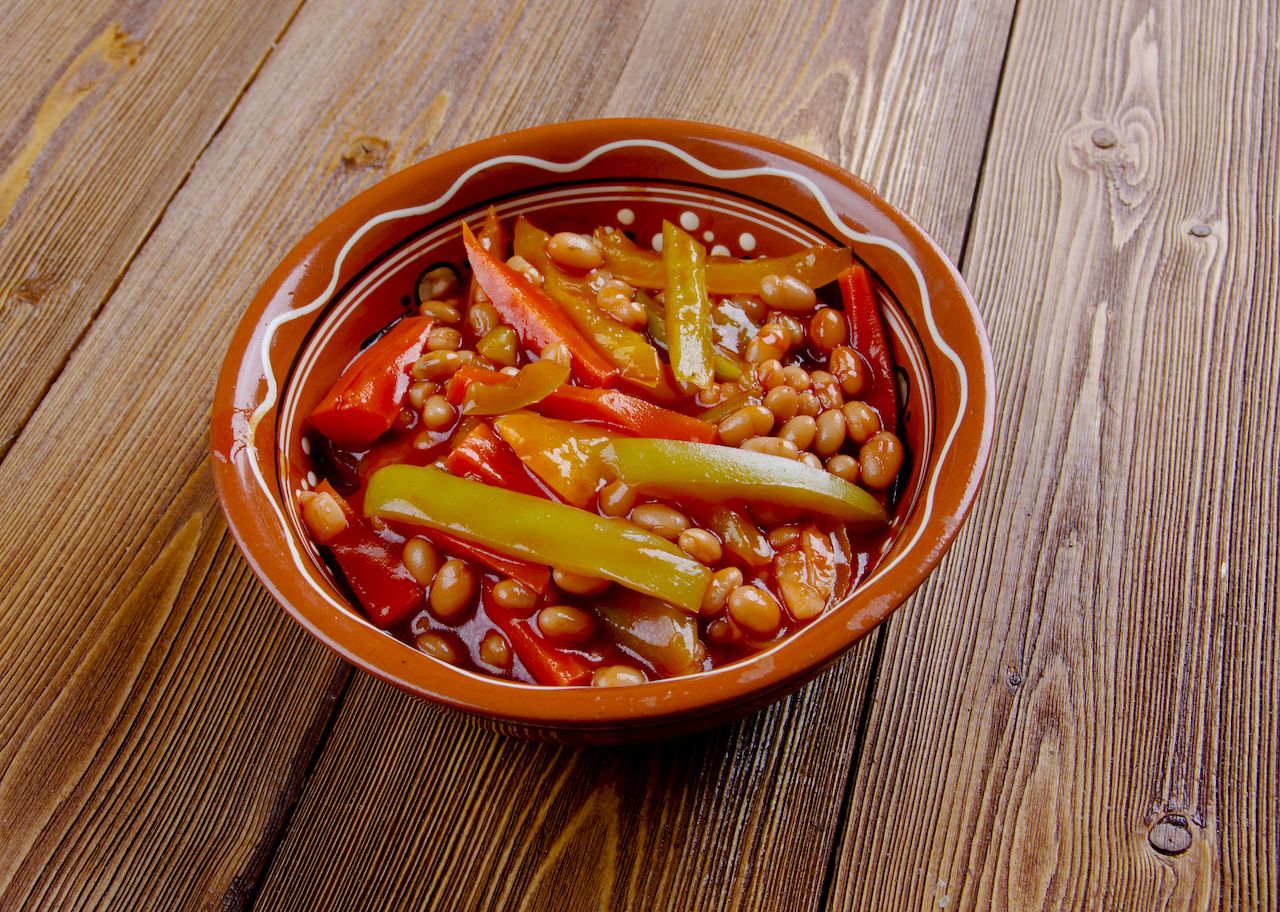 Chakalaka, one of Mbau’s favorite dishes, is a spicy, stewed, vegetable relish usually made with a base of tomatoes and beans with extra veggies such as carrots, peas, or peppers thrown in. “Every household has their own recipe,” says Mbau.

Chakalaka is typically served over mielie pap, a maize-based staple resembling polenta or mashed potatoes. Mielie pap is commonly eaten throughout much of Africa. On its own it has a bland taste — that’s where a blob of margarine and some chakalaka come in. While mielie pap is often rolled into a ball and dipped into sauce in other African countries, South African locals tend to eat it with a spoon. For a South African fusion twist, you can find pap and wors — short for boerewors, a type of sausage — which is the South African equivalent of bangers and mash. All of which, of course, can be topped off with a heaping spoonful of chakalaka. 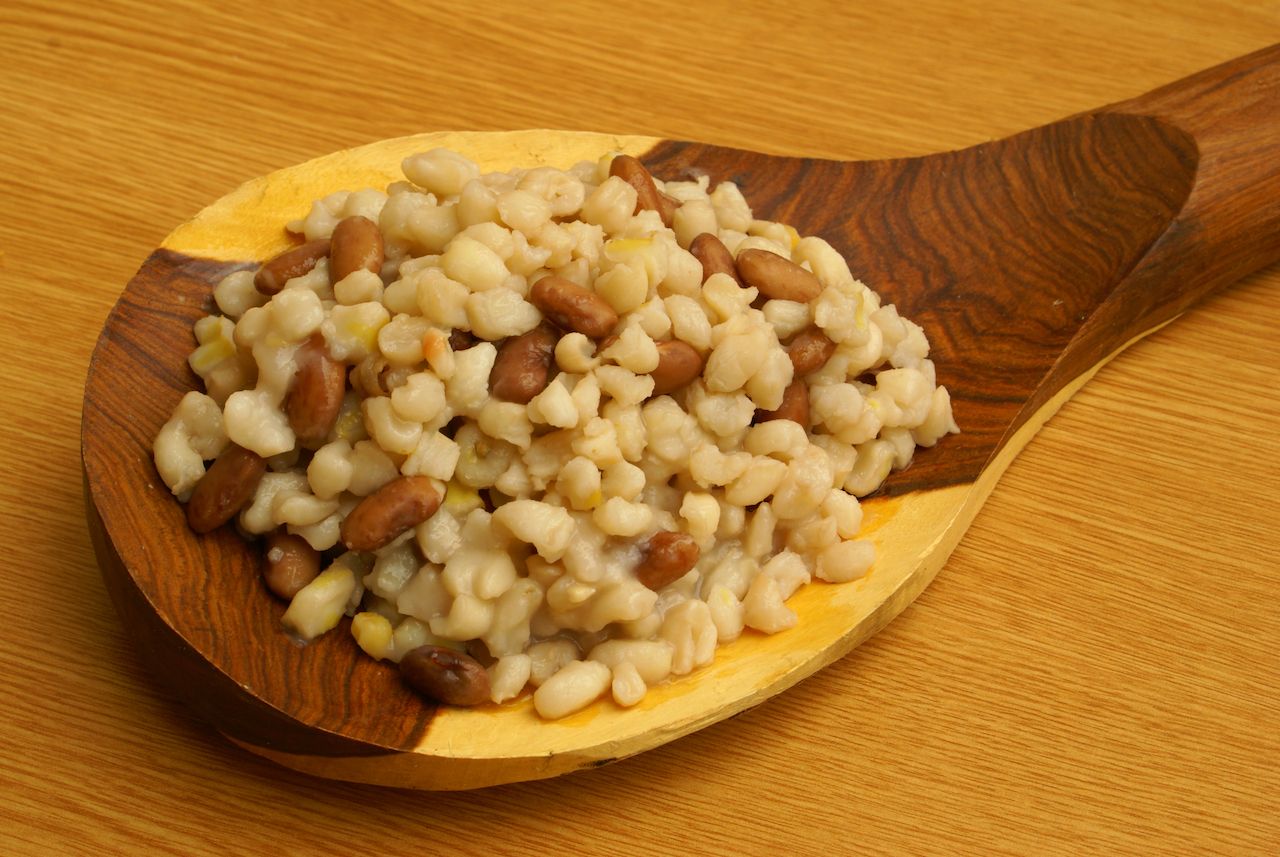 Umgqusho, pronounced with a click where the “q” is, originates from the Xhosa people that lived in the Western Cape region of South Africa. Sometimes also known as samp and beans, this dish is made by cooking maize kernels with sugar beans into a thick, hearty stew. Nelson Mandela called umgqusho one of his favorite dishes, and it’s one of Mbau’s favorite foods, as well. Umgqusho is frequently accompanied by a meat dish to form a heavy and filling meal. 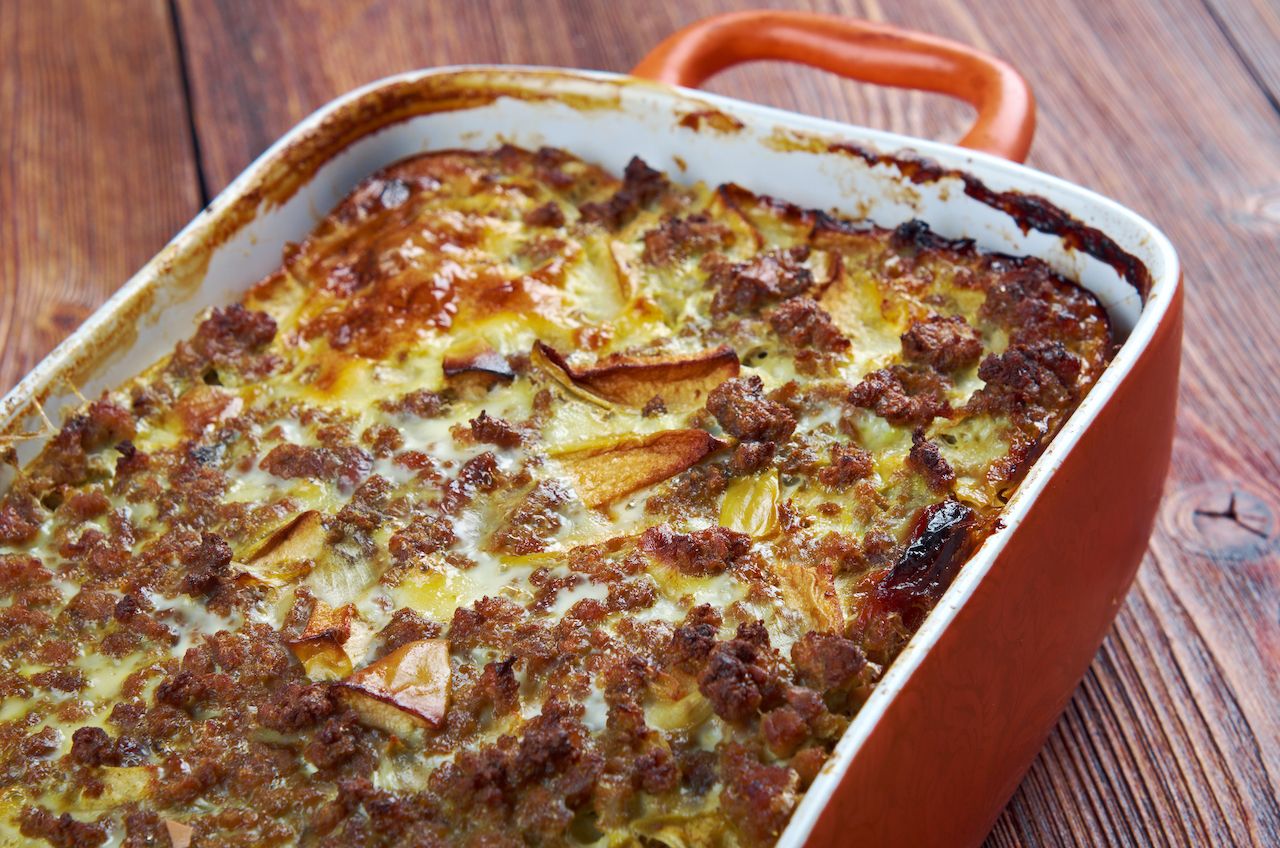 Bobotie is the national dish of South Africa. It’s comprised of minced beef or lamb and topped with a creamy egg custard mixture, a little like meatloaf or shepherd’s pie. The minced meat base might have European roots, as many Dutch settlers were partial to ground meat. Seasonings in the bobotie, however, such as curry powder and cloves, likely come from Southeast Asia. Dried apricots or raisins add a hint of sweetness. Bobotie is typically served with a side of yellow rice and a generous dollop of Mrs. Balls chutney, a classic South African condiment that gives the dish a spicy tang. For a very South African experience, the egg custard topping can be made with an ostrich egg. 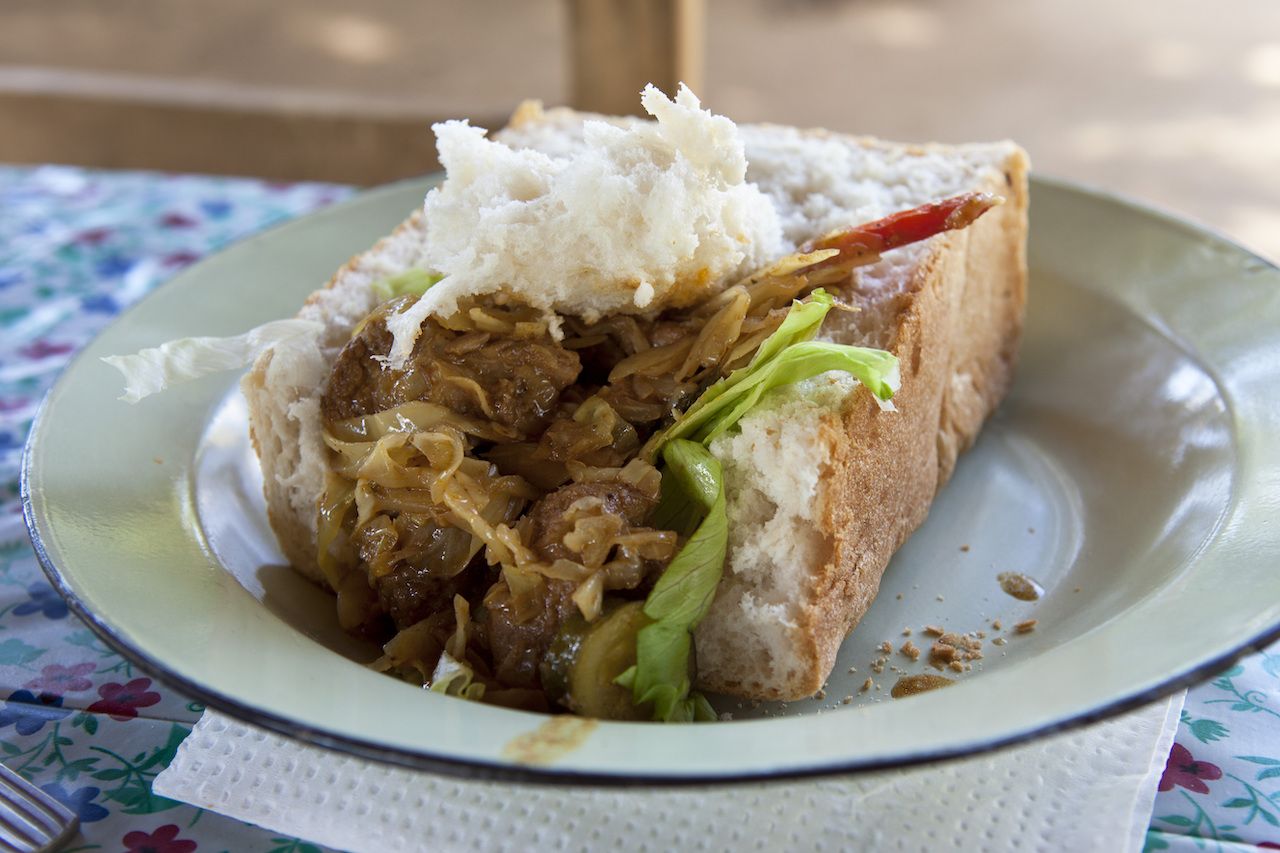 Indian laborers living in Durban during the 1940s invented bunny chow, and it has since become a South African staple. It’s a hollowed-out loaf of white bread filled with curry. As the flavourful curry soaks into the fluffy bread, this dish becomes incredibly satisfying and delicious.

There are a couple of different origin stories, but most of them involve creative Indian laborers using bread as a vessel to transport their meals. Since curries couldn’t be contained in roti, Indian migrants hollowed out bread to pack their lunches. The dish is now extremely popular all over South Africa and includes a varied assortment of curry fillings. Many Indian South Africans will order a kota, or quarter loaf of bread, and eat it with their hands. 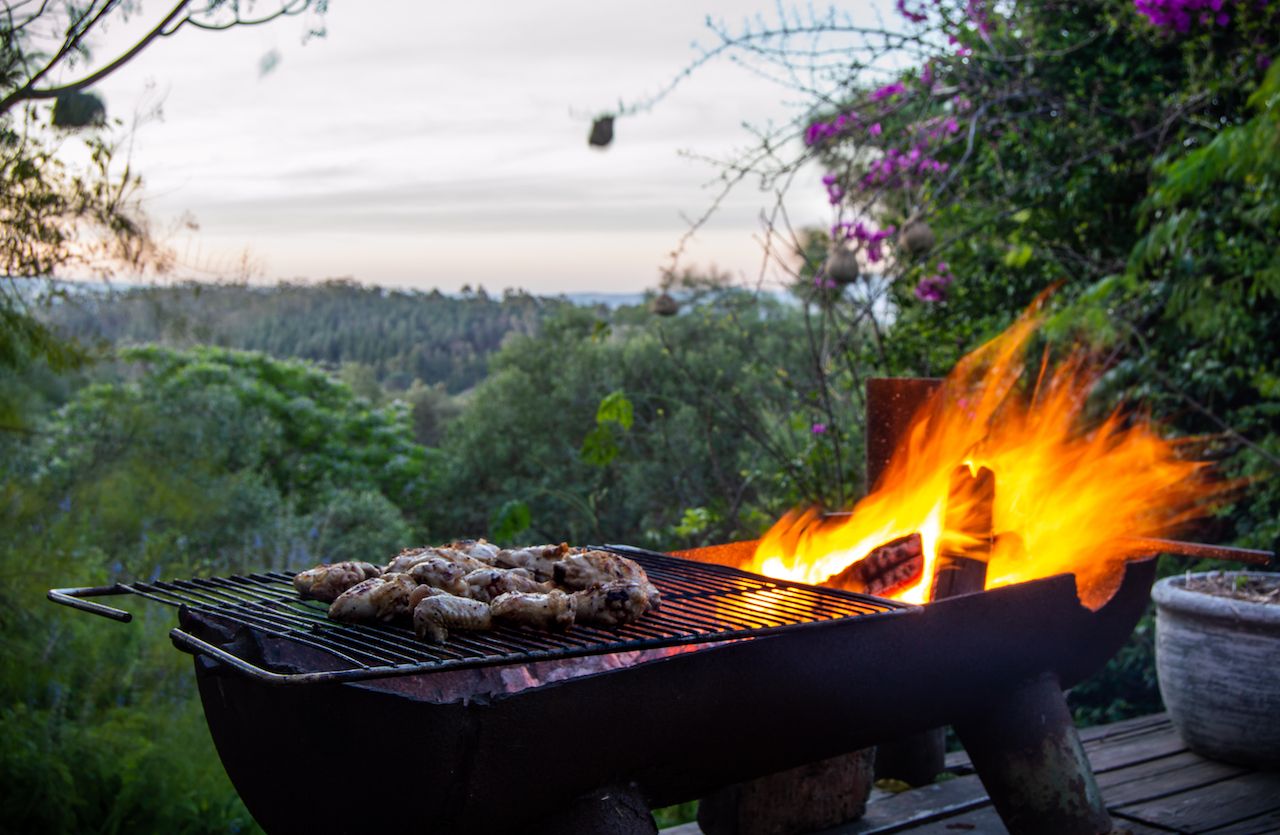 Braai is so essential to South Africa that it’s celebrated on holidays like National Heritage Day each year. Braai can describe both a food and a cooking method. It’s similar to barbecue heated on wood and charcoal, rather than with electricity. Braai is technically an Afrikaans word, the language spoken by Dutch colonists throughout Southern Africa, and braai cooking is shared and beloved across the entire region.

“We’re not big meat eaters, but it’s a passion we get,” Mbau says of braai.

At braai cookouts, you can expect to find an assortment of different meats such as steaks or wings, and, of course, boerewors — a South African sausage. 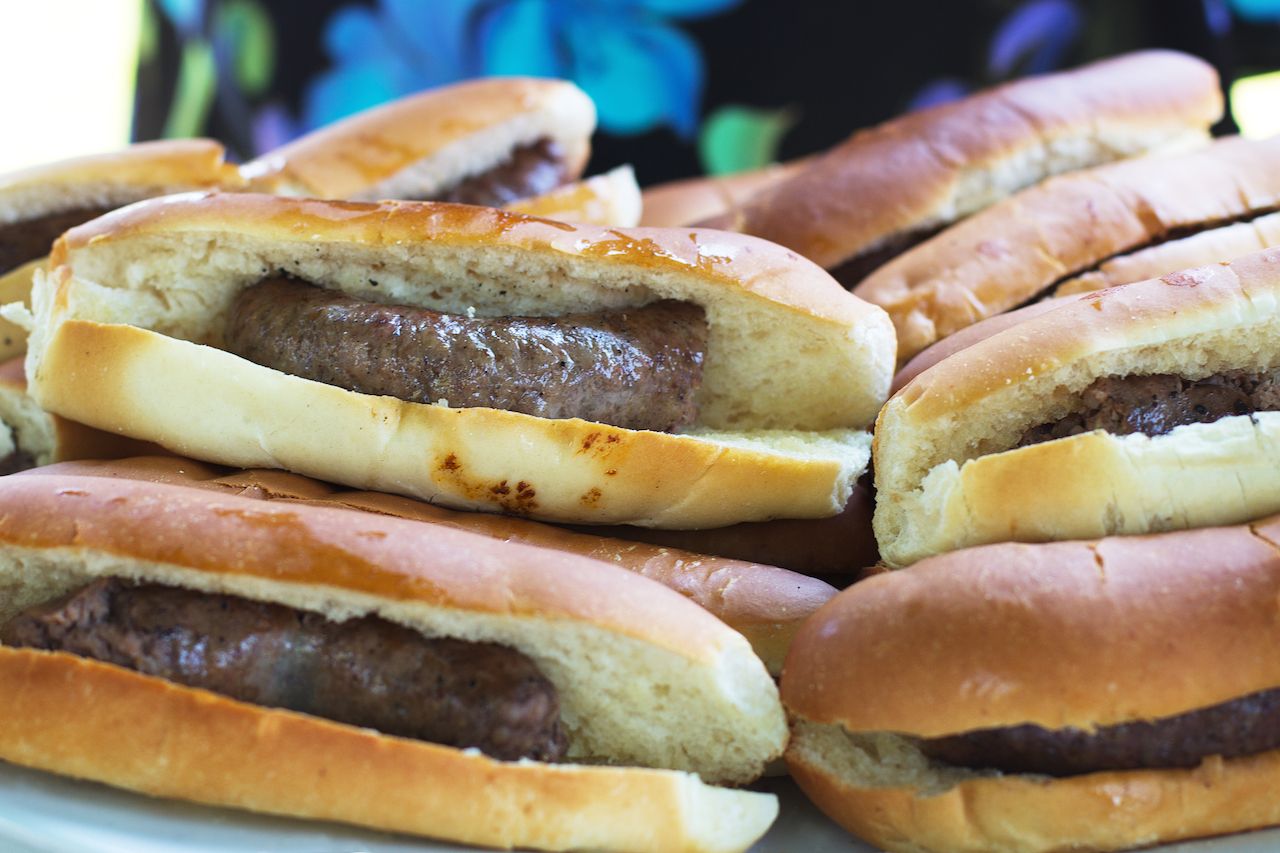 Boerewors roughly translates to “farmer’s sausage” in Afrikaans. Boerewors sausages consist of at least 70 percent coarsely ground beef, lamb, or pork, giving it a rich, gamey texture. It’s seasoned with coriander seeds and usually formed into a long coil and cooked over an open flame. If you venture out on a camping adventure in South Africa, expect to have a boerie, or boerewors sandwiched between two buns, instead of a hotdog. 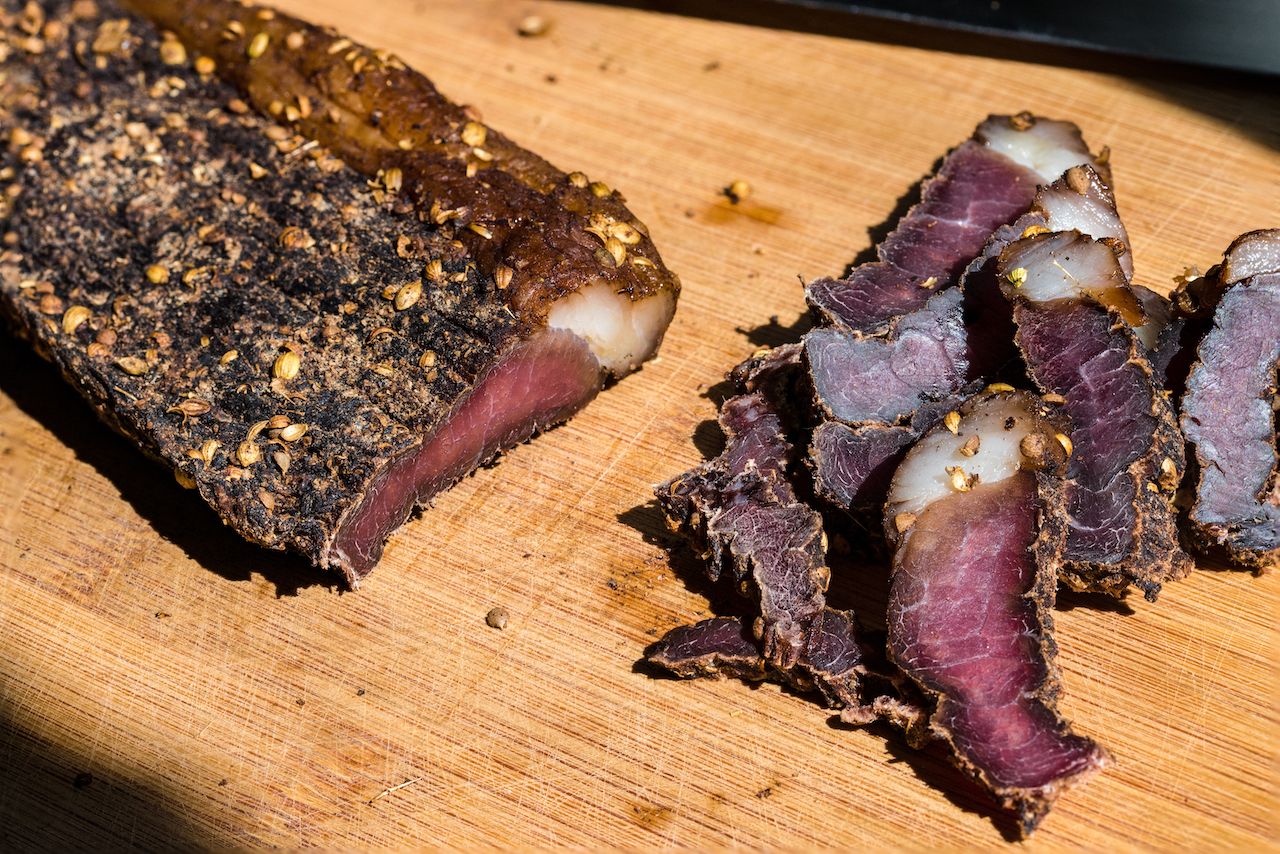 The South African version of jerky might be Khoisan in origin — one of South Africa’s main indigenous groups — but biltong is an Afrikaans word. Khoisan people cured their meats, as did Dutch, French, and German settlers, who dried and cured meat using vinegar and saltpetre, which kills harmful botulism-causing bacteria. The most common type of biltong is beef although you can also find versions made from ostrich or kudu — a type of antelope. Biltong is salty and umami and is usually seasoned with coriander and cloves. 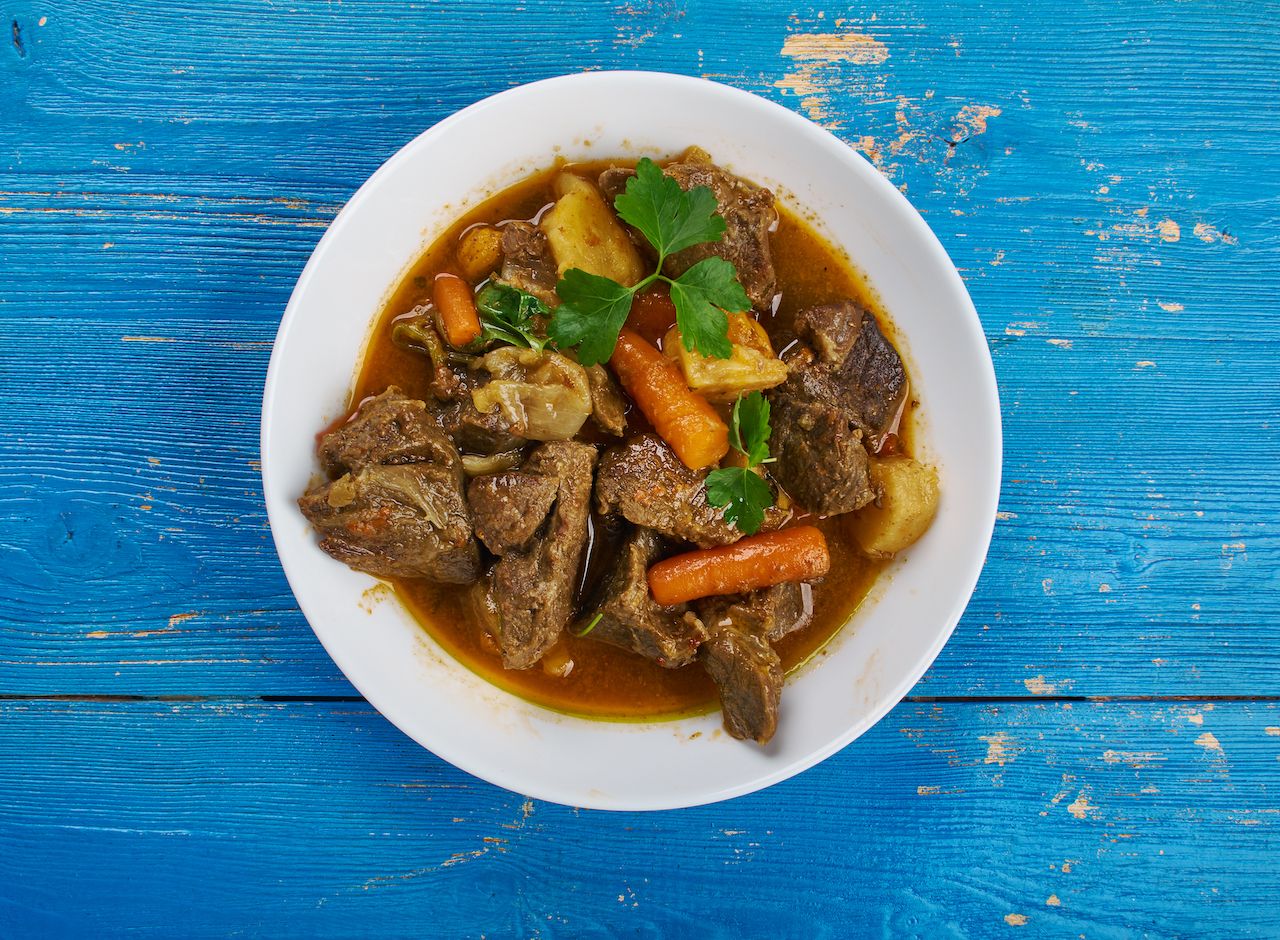 The Cape Malay people are an ethnic group that traces its ancestry to Indonesian slaves brought to the Western Cape of South Africa by the Dutch East India Company in the mid-17th century. Cape Malays developed their South African identity, culture, and, of course, cuisine. Cape Malay curries typically feature spices such as mild curry powder, turmeric, cinnamon, and saffron but aren’t as spicy other Southeast Asian curries. This dish also incorporates a variety of meats, such as mutton, beef, or chicken. Vegetarian versions using beans are common, as well. Many curry recipes also include some dried apricots to add a hint of sweetness.