Exploring the food of the Kenyan coast is a lesson in history. The dishes are a mix of the many cultures of the region, from the Bantu peoples to Islamic, Indian, and European influences. To eat along the coast of Kenya is to learn its rich Swahili past.

Swahili represents many things. It is a people, it is a language, it is a culture. The Swahili region stretches the east coast of Africa from Kenya to the bottom of Tanzania. The language and the culture come primarily from many centuries of interaction between indigenous Bantu and Arab traders. The traders were looking for ivory and gems, and as compensation, they traded spices, clothing, and cutlery. Traders from Egypt, Persia (modern day Iran), India, and Indonesia also joined. In the 15th century, the Portuguese came, followed by other Europeans. All of this influenced the way of life and the food of the Swahili Coast.

Coastal Kenyan food is loaded with spices and coconut. The taste is piquant and flavorful, and the cooking styles can be found from the beaches to the capital city of Nairobi. To try for yourself, start with these eight dishes that tell the history of the region. 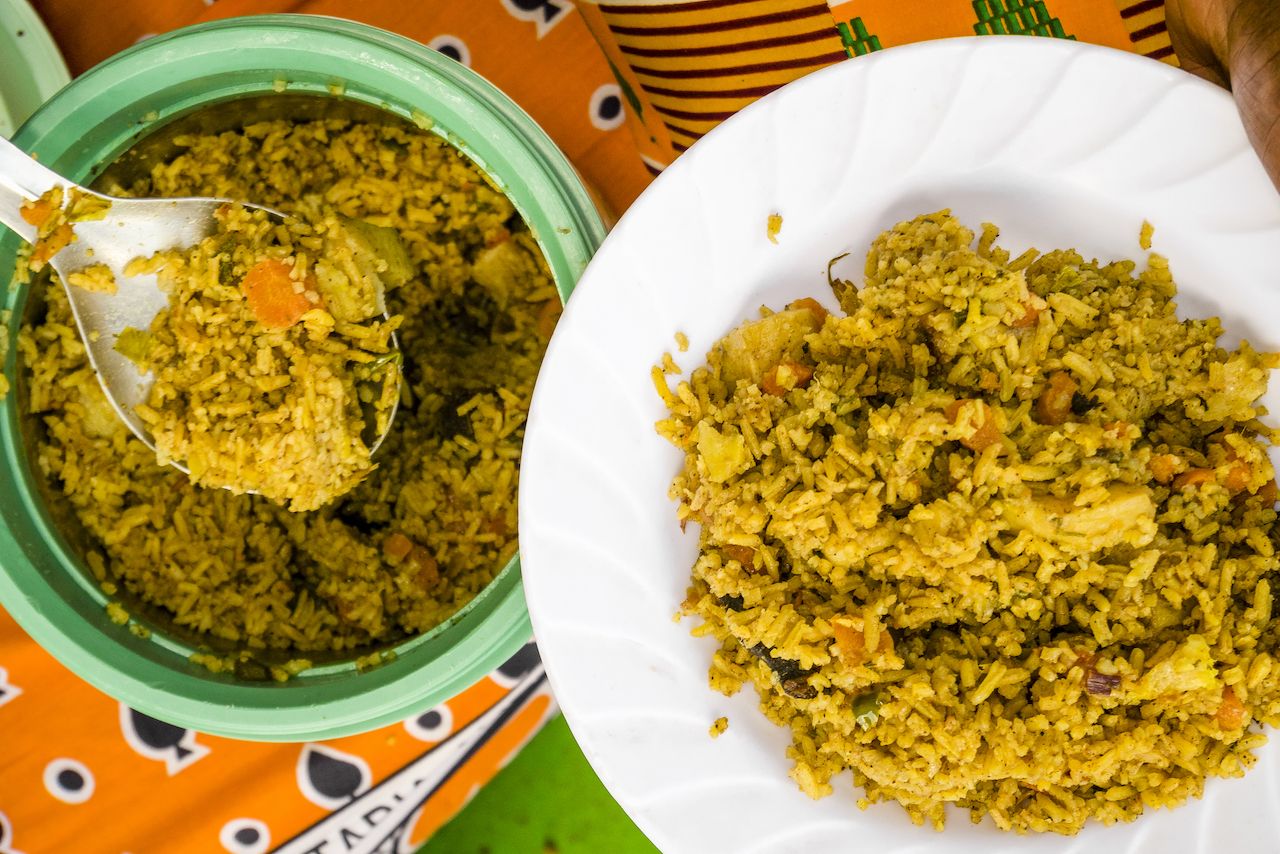 Pilau is prepared by adding to a pot, in this order, whole spices (like cumin seeds, black pepper, cinnamon, cardamom, and cloves), meat (like beef, goat, chicken, or fish), and rice. It’s all cooked together in the same pot. This is the traditional method of preparing this dish. The modern method swaps whole spices with a ground spice mix called pilau masala. The spices are a bit tangy in the former. Pilau is served with a tomato, onion, and a chilli hot sauce called kachumbari. It’s eaten without cutlery.

It’s not clear who introduced this meal along the Kenyan coast, but it’s likely from the Arabs and Persians, which both have versions of this dish. Regardless, this deliciously spicy meal is very popular among the Swahilis and is a menu-must during special occasions and festivities like Eid-ul-Fitr (end of the Ramadan fasting period) and weddings. You can savor this delicacy at any restaurant in the coastal region. 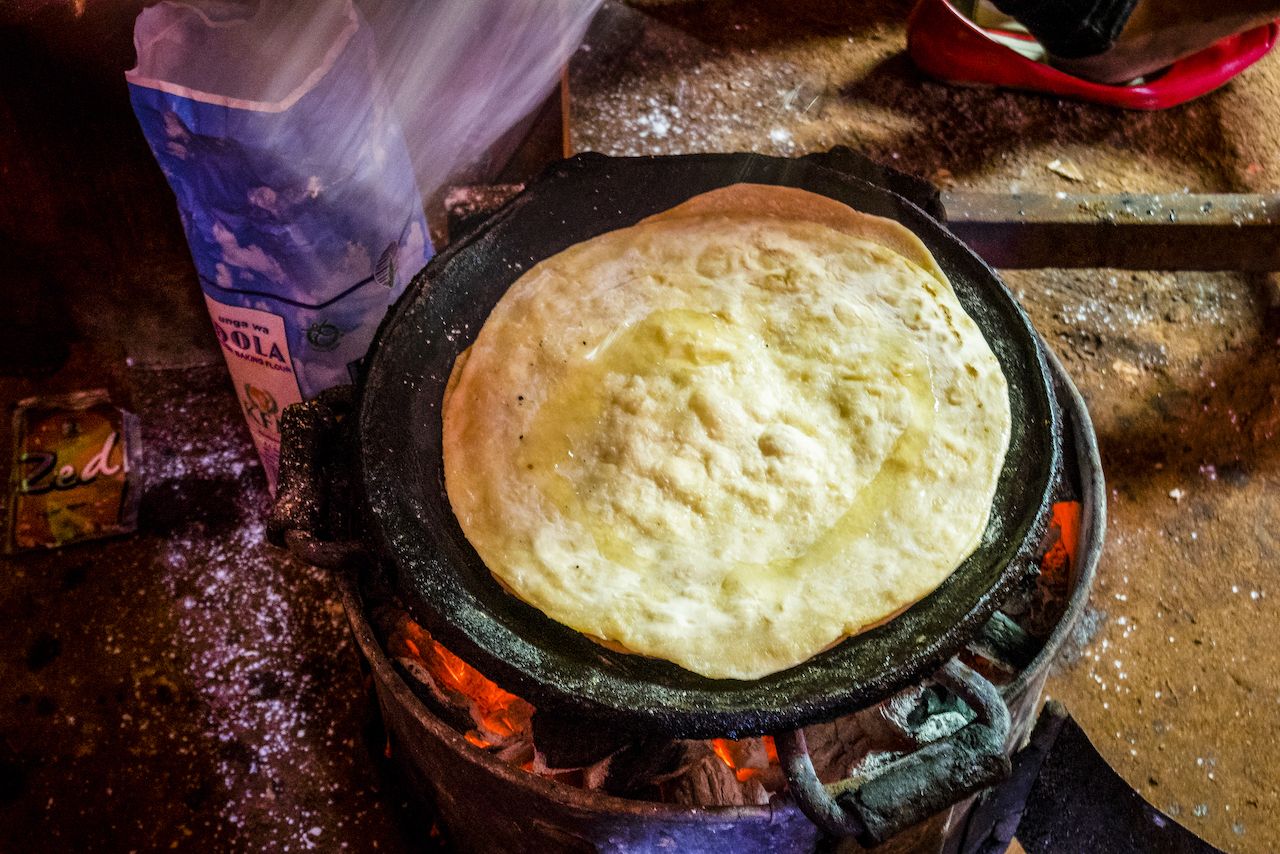 Chapati is a soft flatbread made from unleavened wheat dough seasoned with salt. The dough is divided into small chunks that are rolled into a circular shape about an inch thick in a way similar to a pizza crust. During this process, the dough can be oiled and rolled several times or just once. The uncooked chapatis are then shallow-fried on a flat pan. Chapatis are best served with meat stew (beef, goat, or chicken) or cereal stew (lentils or green peas), and deep-fried chicken.

Flatbreads date back to early wheat cultivation in Egypt. Versions of chapati can be found throughout the Middle East, and the most famous hails from India. While the original recipe for this delicacy is still widely used along the Kenyan coast and the country at large, there are numerous variations available today that use cassava, pumpkin, potatoes, carrots, or herbs.

When the question “What’s for breakfast?” is fielded in most countries, the answer is often eggs, bacon, bread, or cereals accompanied by tea or coffee. On the Kenyan coast, there is only one answer: the scrumptious mbaazi ya nazi na mahamri with your beverage of choice.

Mbaazi za nazi are pigeon peas cooked in coconut milk, and mahamri are sweet and deep-fried pieces of dough similar to doughnuts. Pigeon peas are purely a breakfast item in the coastal region. In rare cases, they’re served with chapati. The use of pigeon peas on the Kenyan coast comes from trade with Indians. 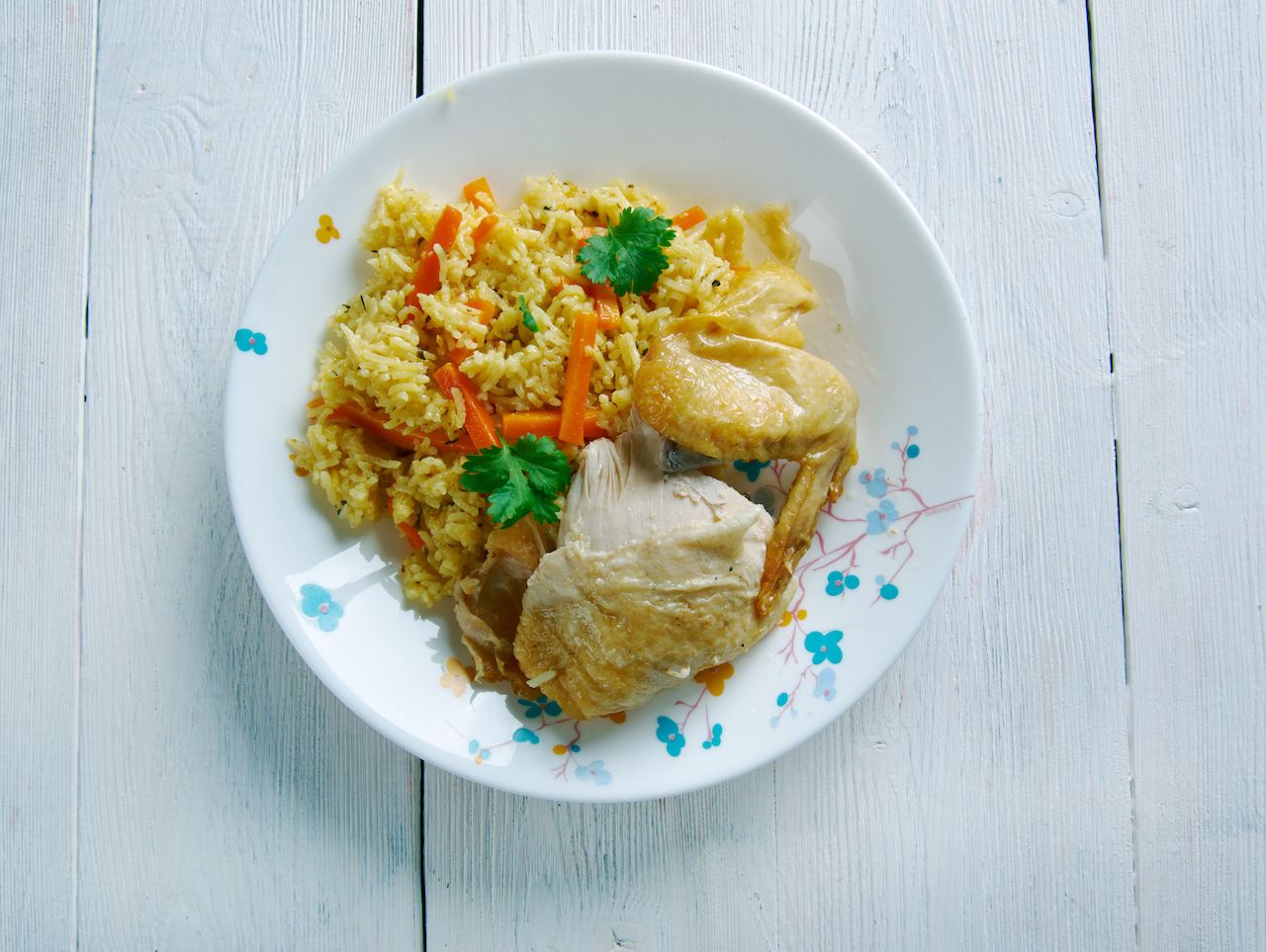 Patience is a key component for this dish. Originally from India, where there are many different types of biryani, it employs as many steps as it does ingredients. The meat is marinated either overnight or a few hours prior with yogurt, chopped tomatoes, fried onions, chili powder, turmeric powder, crushed ginger, garlic paste, and salt. The eggs are boiled beforehand and vegetables are fried separately — just don’t forget the preparation of kachumbari sauce. The final ingredient is saffron or curd milk (or for that special Swahili twist, coconut milk). The meal is served with some plain yogurt and lemon pickle or kachumbari sauce.

At first glance, Kenyan coconut rice looks like a normal rice dish. But on first bite, the strong flavor of coconut fills your mouth. If you look closely, you’ll see the tasty coconut flakes.

It’s originally from India, and is steeped in flavor for such a simple dish. The white rice is cooked in coconut milk, and coconut flakes are added to enhance the palate. It’s served with steamed vegetables or meat stew (chicken, beef, goat, or fish). The coconut oil gives it a creamy taste and a silky texture. Coconut rice is readily available in restaurants along the Kenyan coast, but not as much outside of that region due to the availability of fresh coconuts. 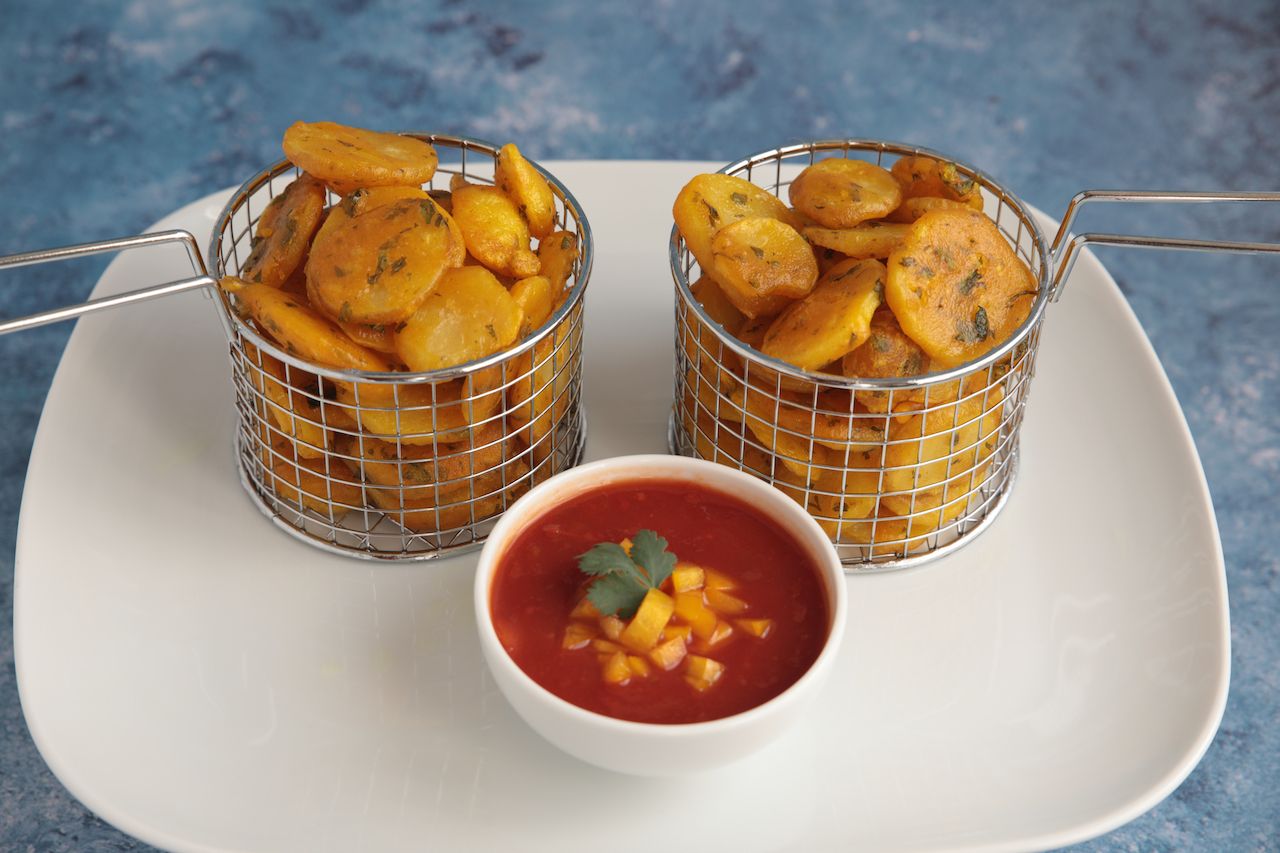 Bhajia are delectable fritters served along the coast. They’re made with thinly sliced potato chips (about an inch thick) that are soaked in a batter made of gram flour, corn or rice flour, coriander and other herbs, garlic, and pepper. The potato slices are then deep fried and served hot with either ukwaju (tamarind sauce), meat (beef, goat, fish, or chicken), or vegetables. The spicy taste and aroma are distinctly Indian, where the dish comes from.

The next time you decide to break to the Kenyan coast, do not be surprised when you order a kebab and what you get is far from your expectation. This popular snack, with origins in the Middle East, is not your normal meat skewer kebab. The Kenyan kebab is prepared by deep frying a roll of minced meat (beef or goat), a mix of onion and herbs (primarily coriander and garlic), and eggs and breadcrumbs to get a crunchy coat. They’re served plain or with fries and a spicy sauce. 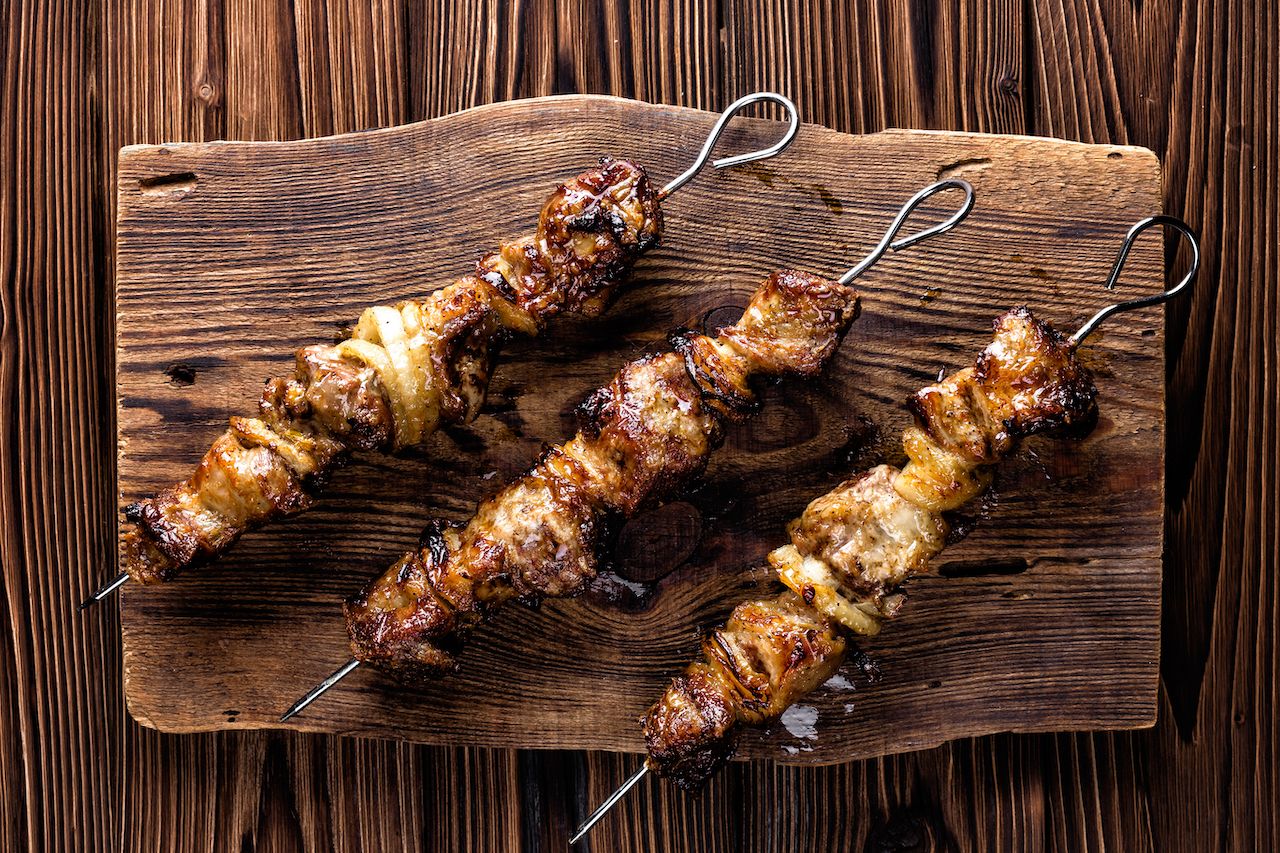 Mshikaki are African beef kabobs similar to what the rest of the world calls kebabs. This is a fairly easy to make snack of marinated meat (beef, chicken, goat, or fish) served on skewers and grilled over coal. Of these, the most popular is the beef variety.

A disclaimer: Kenyans generally love meat. Many of the varieties of mshikaki you will find locally are entirely meat. Hotels and high-end restaurants may mix meat with vegetables and other herbs to achieve a specific flavor punch, though. It’s often served plain, but is sometimes accompanied by baked potatoes or French fries.

A culinary import from the Middle East and Persia, this snack has become so popular to warrant a festival called the Mshikaki Street Festival. It is a delight in pubs and on the streets in equal measure.