Of all the culinary classics synonymous with the rich food heritage of India, biryani is in a class of its own. Variations on the simple rice, meat, vegetable, and spice dish can be found in every section of India, though it’s not quite known how it became such a staple.

One theory traces the origins to Persia (where berian means “fried before cooking”) and the Mughals, who brought the dish to the Indian subcontinent in the 16th century. Another is that it’s an evolution of the plov, or rice pilaf, brought to the region by the Macedonian Alexander the Great around 327 BCE. Yet another theory is that biryani has local roots in the simple rice and beef dish from the Hindu scripture Brihadaranyaka Upanishad around 700 BCE.

In the end, it’s immaterial considering the mishmash of indigenous flavors and local ingredients. There’s now a different biryani for every region of the country, making it a dish as diverse as India itself. There’s Bhatkali biryani with its fiery red chilies, Kashmiri biryani with its pungent asafoetida (fennel powder), and Beary biryani for its no-spice lightness. Not to mention Bhopali biryani, which is perfect for mutton lovers, and Mughlai biryani, which is served with almond paste and dried fruit the way 16th-century royalty liked it.

These are the eight essential types of biryani you need to know.

The crown king of all biryanis, Lucknowi biryani was created in Northern India by Mughal royals in Awadh around the 18th century, when culinary finesse rose to its peak in the royal kitchens. The rice is cooked separately in spices, and marinated chicken is added later in a separate layer and cooked in a vessel over a low flame in dum pukht style (meaning in a pot sealed with flour) for hours. Delicate whole spices like saffron and star anise play the role of showcasing, rather than overpowering, the rich flavors of the meat. The subtle fragrance stays on as an after-effect. 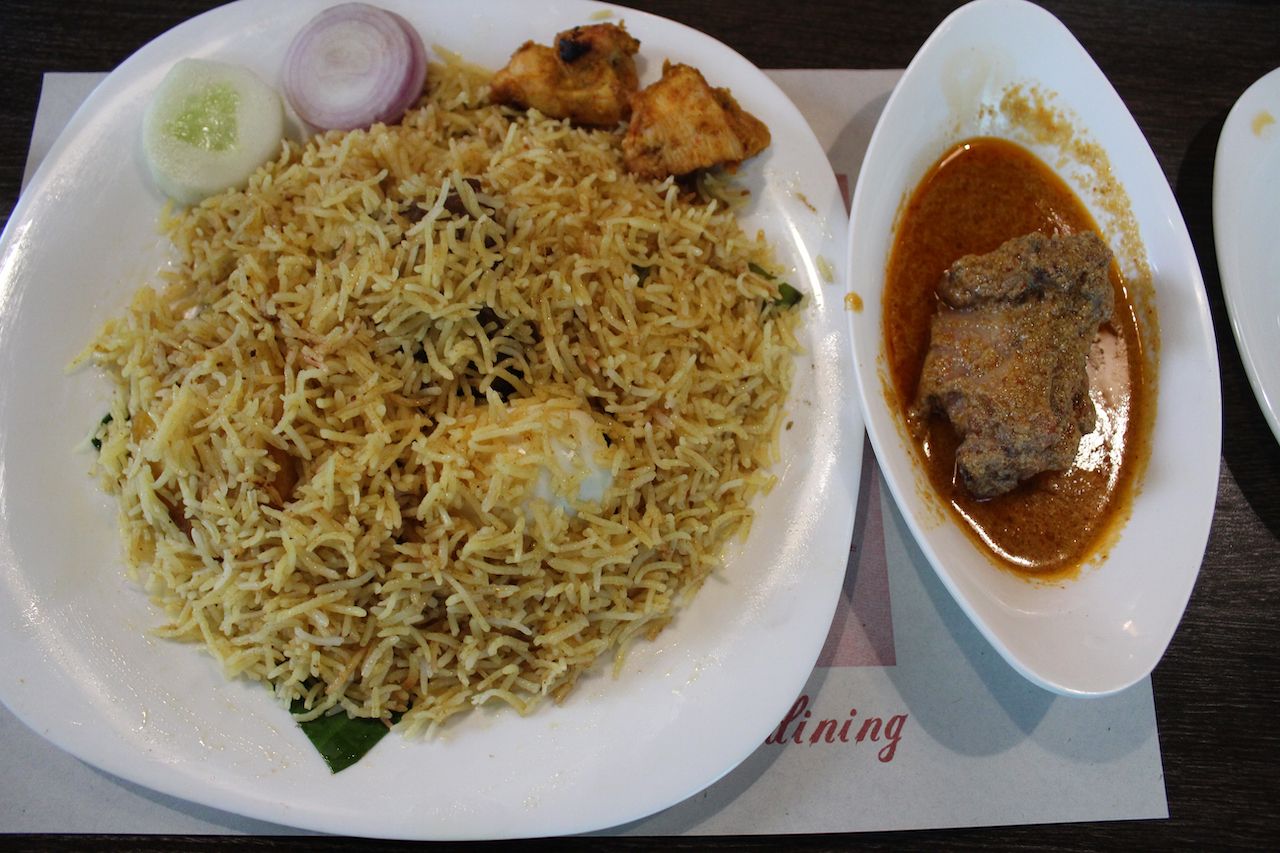 With the onset of the British rule, Nawab Wajid Ali Shah (ruler of Awadh) was deposed to Kolkata. Along with his entourage, the culture and traditions of Awadh came with him, and so did the biryani. In Kolkata, the addition of deep fried potatoes (to replace the more expensive meat) resulted in a new signature style. The result is the lightly spiced and slightly sweet Kolkata biryani. Nutmeg, cinnamon, mace, cloves, cardamom, and yogurt are used for marinating the meat. Rose water and saffron are its special ingredients.

This variation belongs to the western Gujarat-Sindh region of India. It is easily one of the spiciest varieties of biryanis available in the country. Soft mutton chunks form the base of the dish, along with yogurt, fried onions, potatoes, and tomatoes. This one is zesty and spirited. 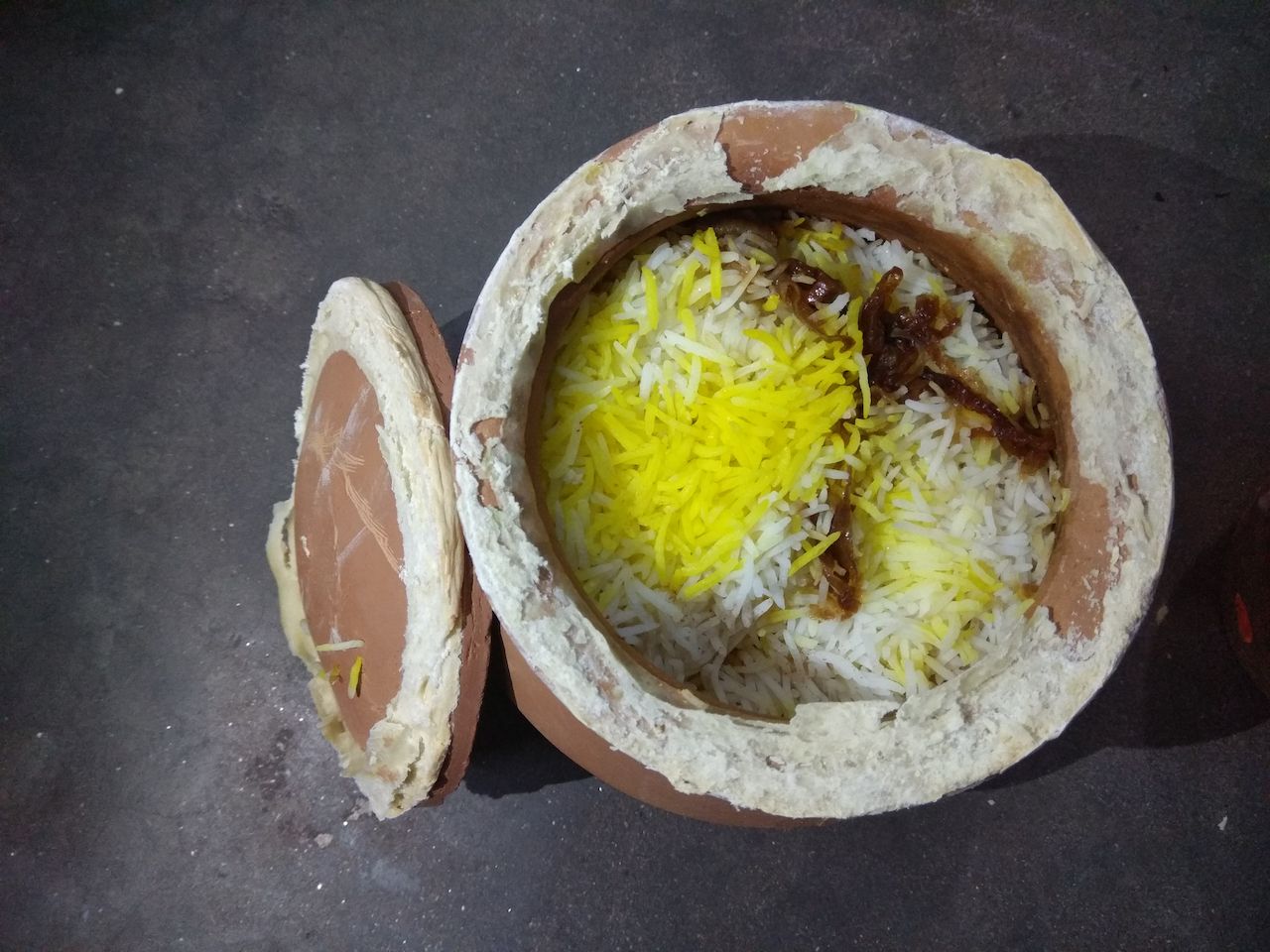 Biryani reached Hyderabad with the invading army of the Mughal emperor Aurangzeb in the late 1600s, and the chefs for Nizam (the monarchy of Hyderabad) developed 47 new varieties for royal consumption. The vegetarian version is called Tahiri biryani. The quintessential Hyderabadi biryani cooks raw goat meat and rice together until the meat flavors seep into the rice. Fried onions, mint, and coriander leaves add flavor, but it’s the strong spices and sourness that define Hyderabadi biryani.

Another special Biryani from Kozhikode region of Kerala, but this one is cooked in dum style (slow in the oven), making it moister. Varieties include mutton, chicken, prawn, and fish. Fried onions give it a brownish color, and it’s garnished with sauteed dry fruits. Spices never interfere with the taste of the meat. Aroma meets spice for a winning combination in this version. 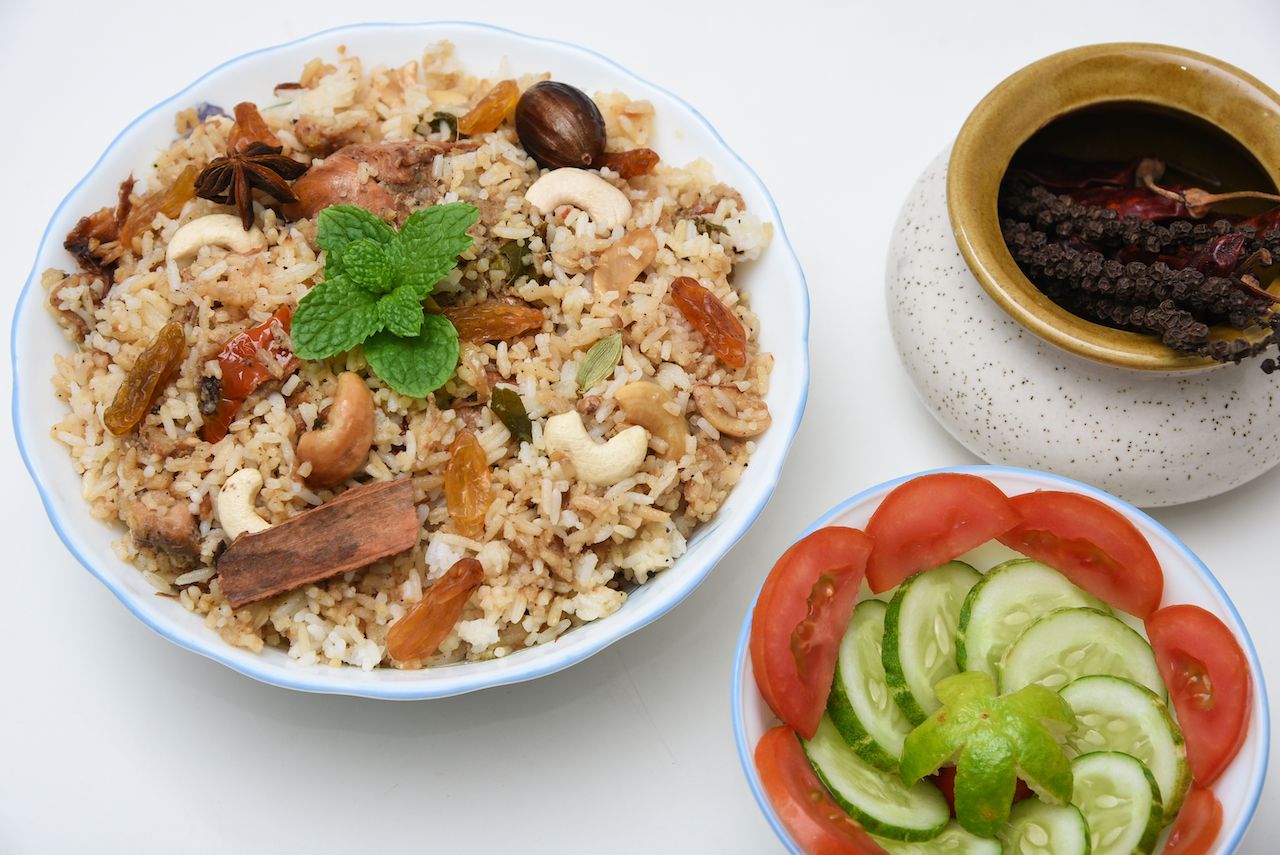 This coastal Malabar recipe uses small-grain Khyma or Jeerakasala rice instead of Basmati, and it uses a lot of ghee. Fish or prawn are often used instead of the chicken or mutton used in other regions. All the main ingredients are cooked separately and mixed together later. Onion, ginger, garlic paste, lime juice, curd, coriander, and mint leaves are used, along with local spices. Chili content is low, and it is garnished with cashew nuts and sultana raisins.

Strong meaty flavors make up this kind of biryani. Coming from the Tamil Nadu region in Southern India, dried chili paste and whole spices are the trademarks of this biryani. The dish is usually accompanied by sour eggplant curry. Cooked in dum style using coconut milk, this recipe includes curd and mint leaves, and the taste closely resembles that of Lucknowi biryani. It’s considered light on the stomach. 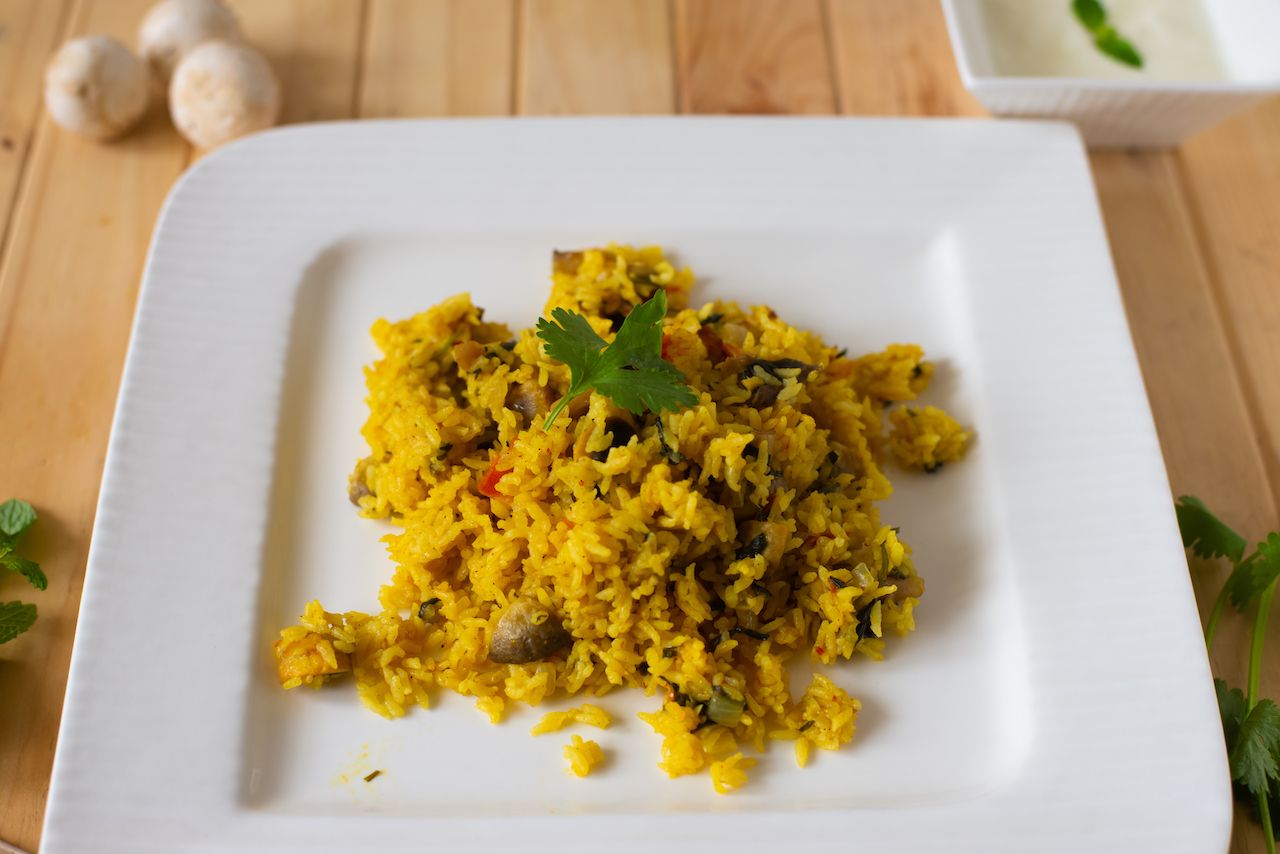 Another product of the Tamil Nadu region, this one uses jeera samba rice, which is ideal for absorbing flavors. Cube-sized meat pieces are used instead of large chunks. The distinguishing factor is the use of curd and lemon for a tangy taste. Pepper leaves are added to fire up the palate.

Food + Drink11 Indian Curries That Are Infinitely Better Than Chicken Tikka Masala
Tagged
Food + Drink India
What did you think of this story?
Meh
Good
Awesome