People are creatures of habit — especially when it comes to food. It’s simply easier to stick to tried-and-true dishes that we know are delicious. With Indian food, that often means ordering (and re-ordering) the regular recommendations of chicken tikka masala, garlic naan, dal, and biryani. Indian cuisine, however, is much more than that.

The menus of many Indian restaurants in the US and UK are typically dominated by Mughlai dishes, a category of north Indian food. Some classic orders lack any traditional roots to a place in India at all, though. Chicken tikka masala, for example, is like the General Tso’s Chicken of Indian cuisine and was invented in Glasgow, Scotland.

Yet Indian cuisine is by no means a monolithic entity. In a vast country like India, the cuisine changes along with the language, culture, religion, traditions, and culinary customs. While northern India relies more on wheat, southern India uses mostly rice. Along coastal regions, fish, coconut, and tamarind are recurring ingredients. Some of the most popular sweets hail from eastern India. In western India, dried lentils, beans, dairy, and millet-based bread are plentiful.

By leaning towards the same go-to dishes like chicken masala, vindaloo, and rotis, you’re barely scratching the surface of what Indian food has to offer. There’s a wide world of curries (a catch-all term for a dish made of meat or vegetables cooked in a sauce) out there. Be adventurous and skip the typical must-haves on restaurant menus. Instead, get to know and love these Indian dishes. 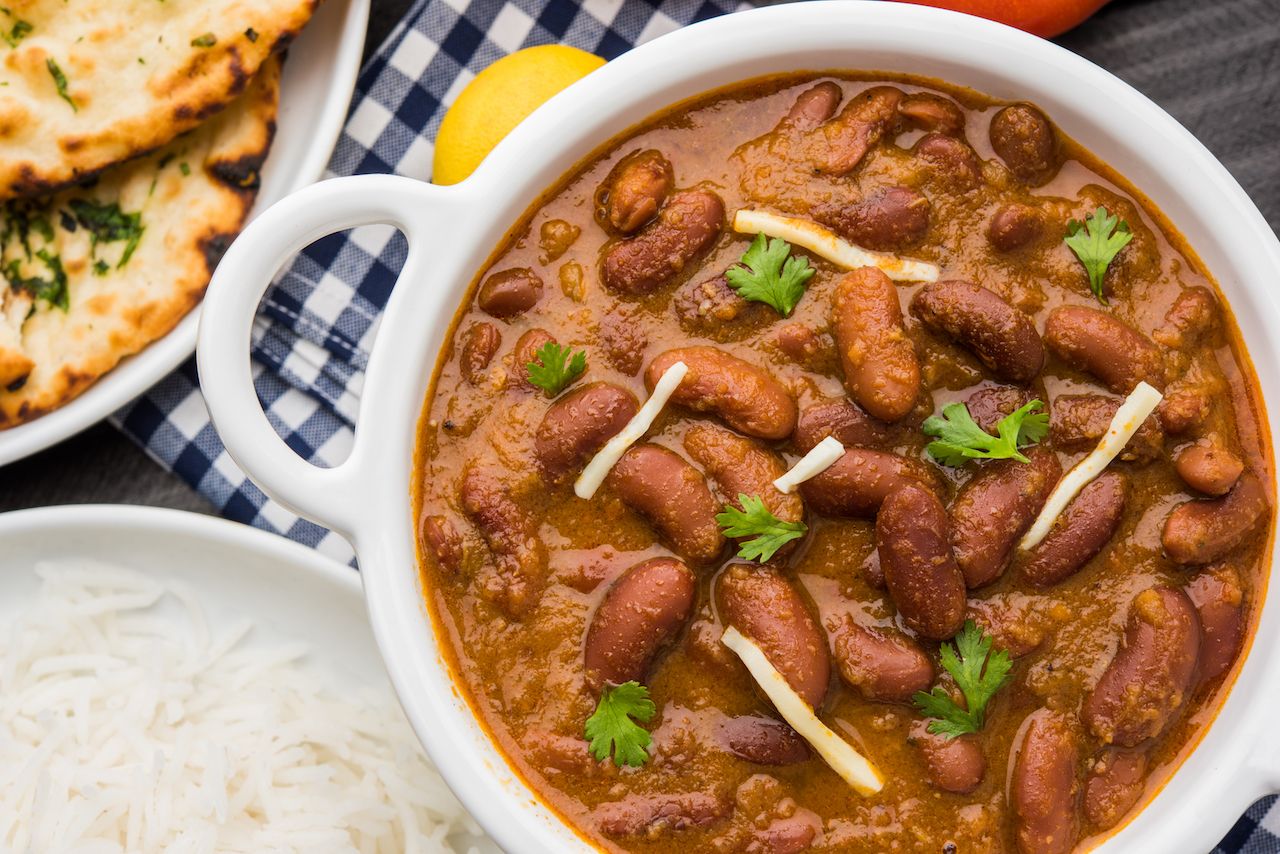 Rajma masala is a simple but beloved Punjabi dish made with red kidney beans cooked in a spicy tomato and onion sauce with a few spices. This creamy and warming dish is perfect for wintertime and is best paired with chawal (rice) or chapati (unleavened flatbread). 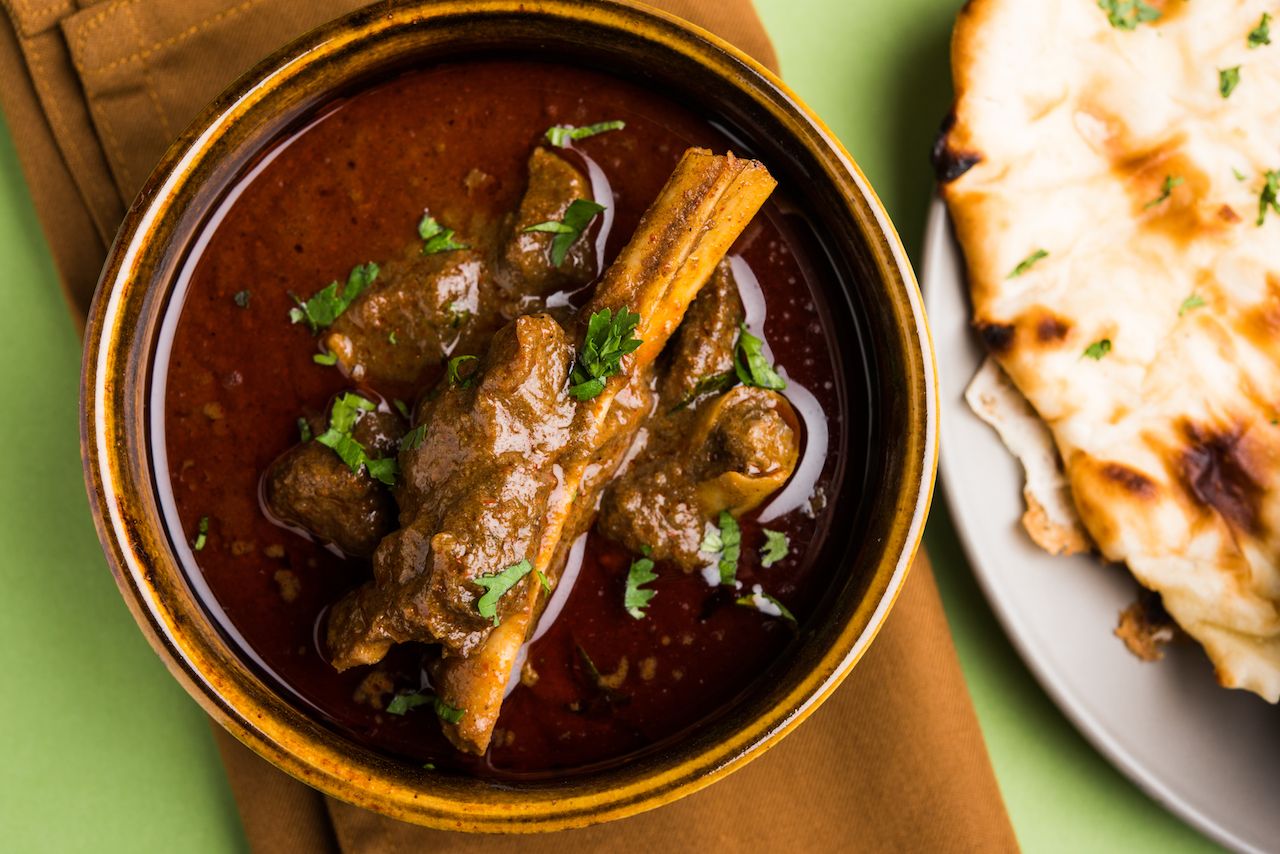 An often forgotten dish on Indian restaurant menus, rogan josh is a signature Kashmiri dish with Persian origins. The word rogan means “oil” in Persian while josh means “intense heat.” Typically made with lamb or mutton, this hearty and aromatic curry is known for its fiery red color and heavy dose of warming spices like whole clove, cardamom, and cinnamon. Its smoky and sweet taste comes from its base of onions caramelized in plenty of ghee (clarified butter). 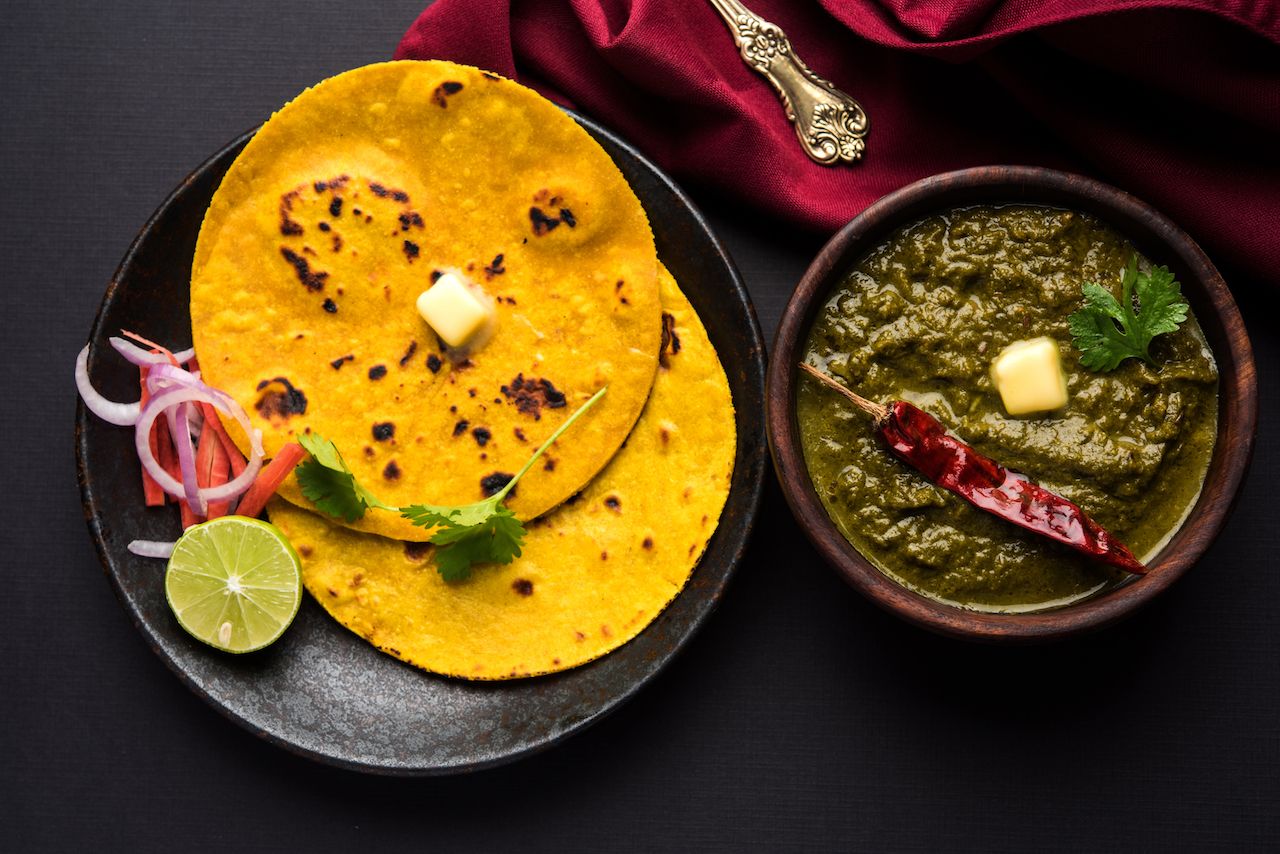 Another classic Punjabi dish, sarson ka saag is a vegetarian curry made with mustard greens, spinach, and other leafy vegetables. Sarson means “mustard” in Hindi, and saag means “greens”. This earthy and richly flavored dish is slowly simmered on a low flame and finished off with a dollop of ghee. It’s best paired with makki ki roti, an unleavened flatbread made with maize flour. 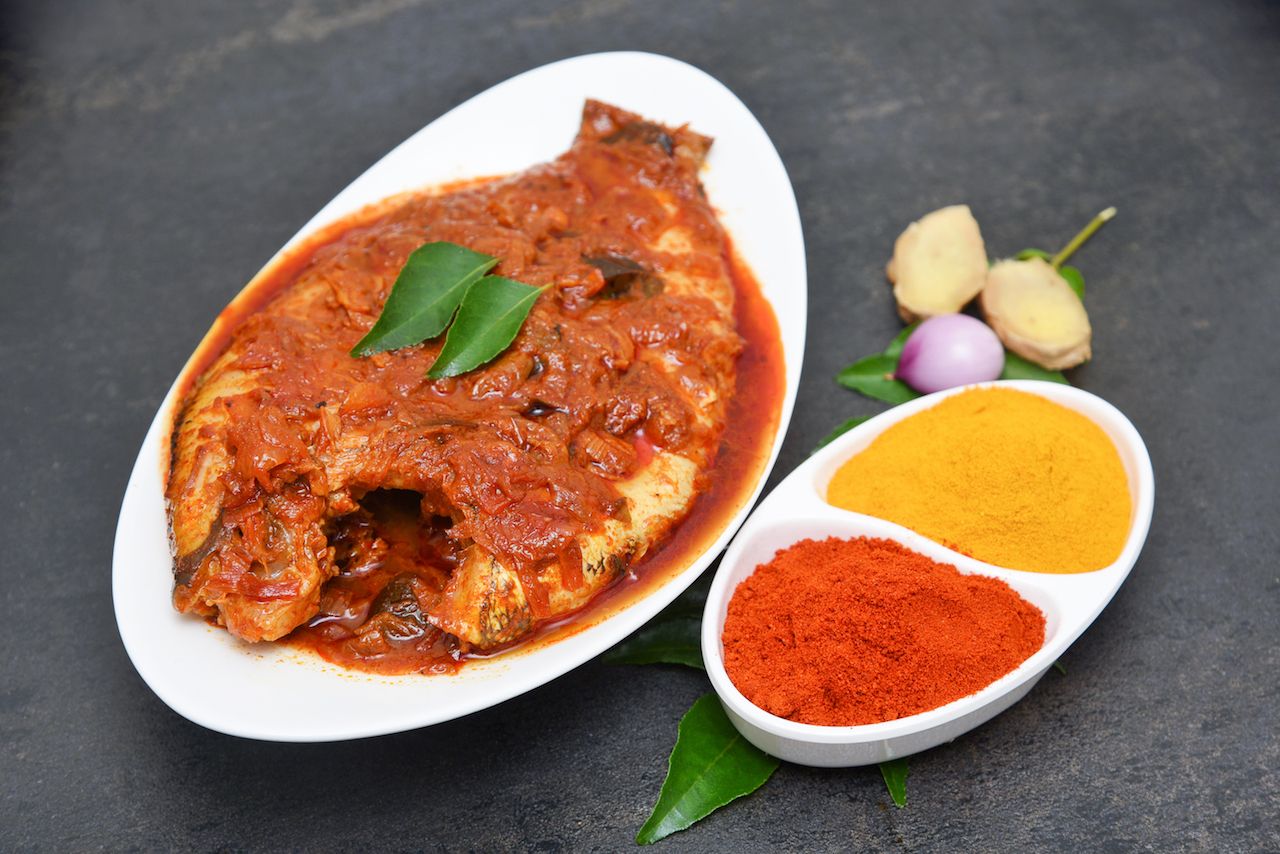 Fish is an integral component of Bengali cooking in eastern India, and macher jhol is a must-try dish for any seafood lover. This traditional, spicy fish curry is cooked in mustard oil and seasoned with ground black and yellow mustard seeds, turmeric, onions, and green chilies. 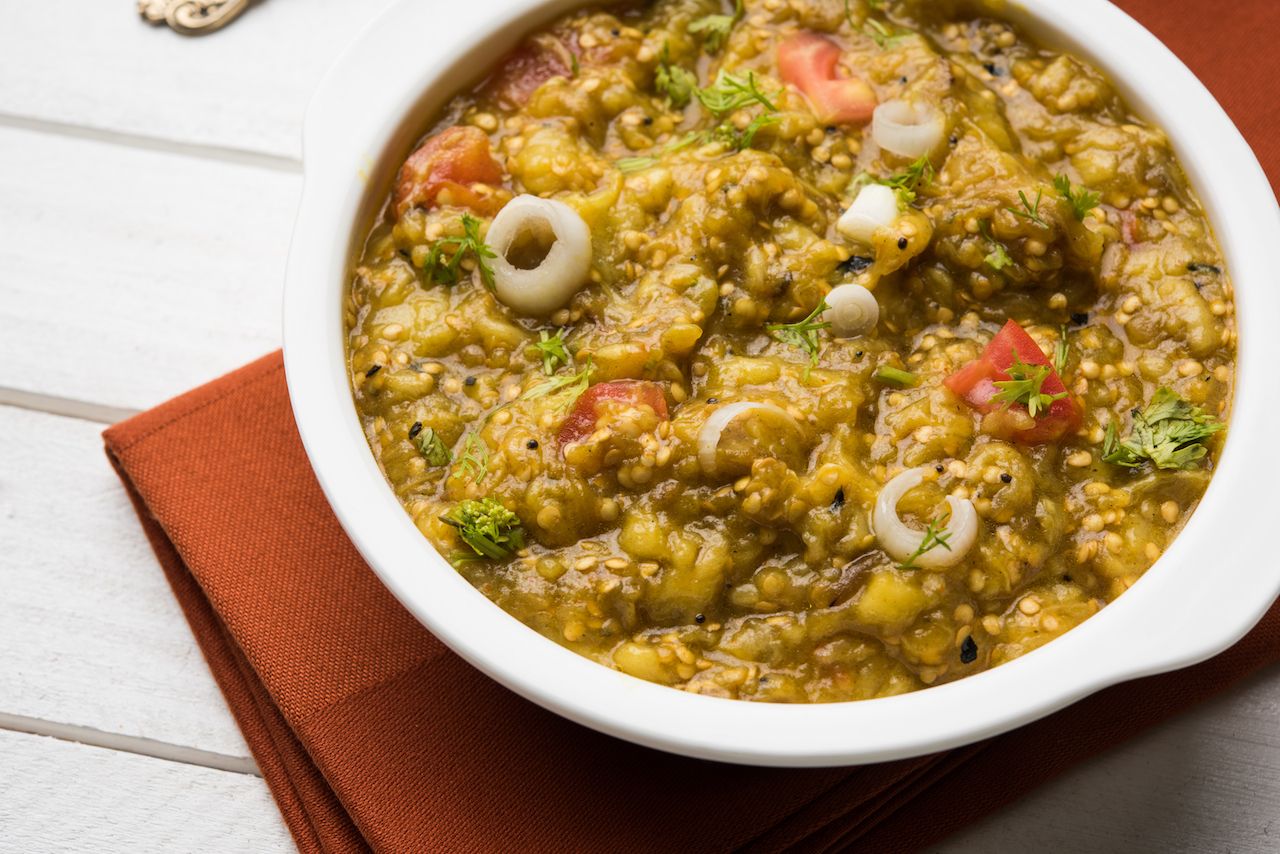 Baingan bharta is a smoky eggplant dish that’s known for its sweetness. It’s prepared with eggplant, tomato, onion, garlic, and simple aromatic spices and served hot. This flavorful and healthy vegetarian dish is somewhat like a warmer version of baba ghanoush, a cold Middle Eastern dip made with pureed roasted eggplant. Rather than pureed, however, the ingredients in baingan bharta are mashed together. 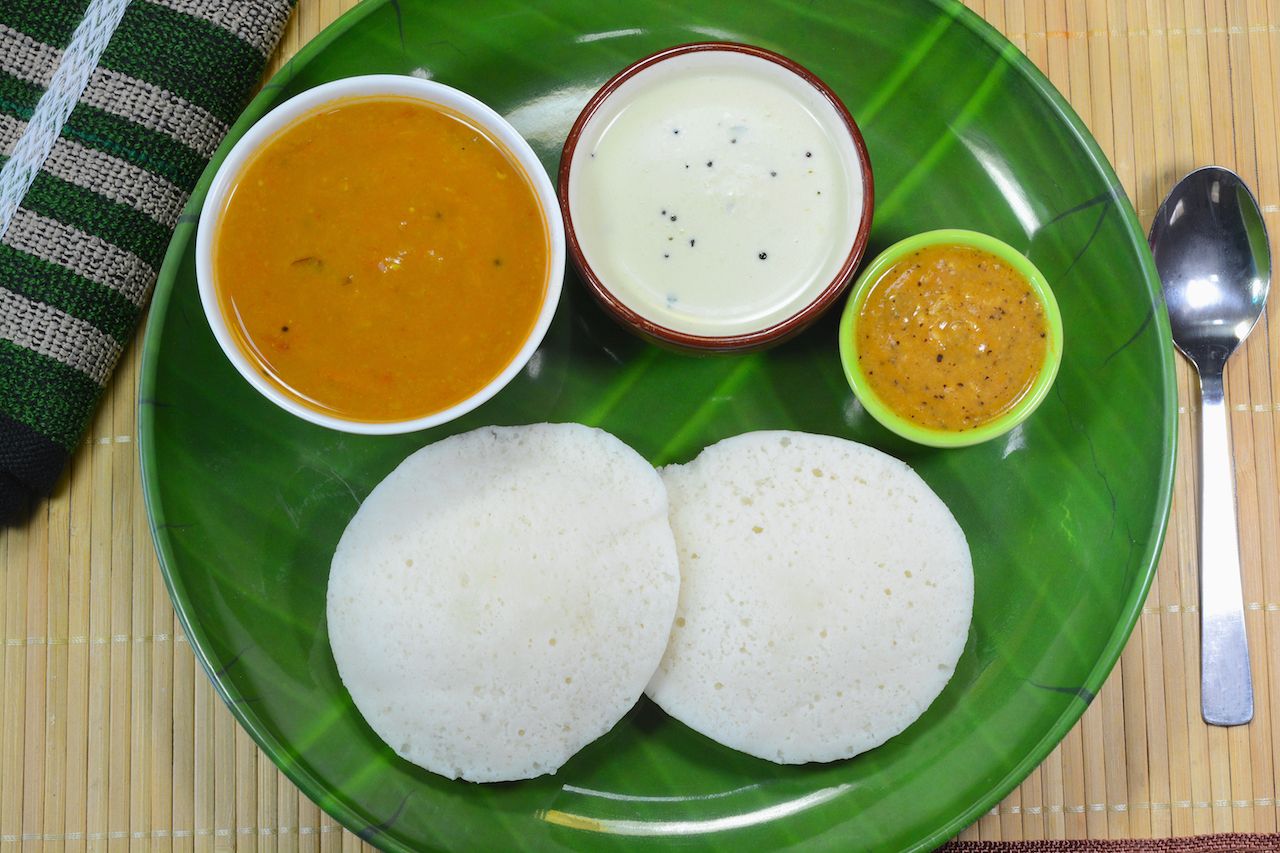 It’s impossible to compile a list of must-try Indian dishes without including the humble sambar. This spicy and tangy stew is made with lentils, vegetables, and a tamarind and coconut broth. It’s ubiquitous in southern India, and every state and home in the region has its own take on the dish. This soul-soothing dish is often paired with coconut chutney and eaten with rice, idlis (rice cakes), dosas (a type of pancake made with rice flour), and vadas (fried snacks). 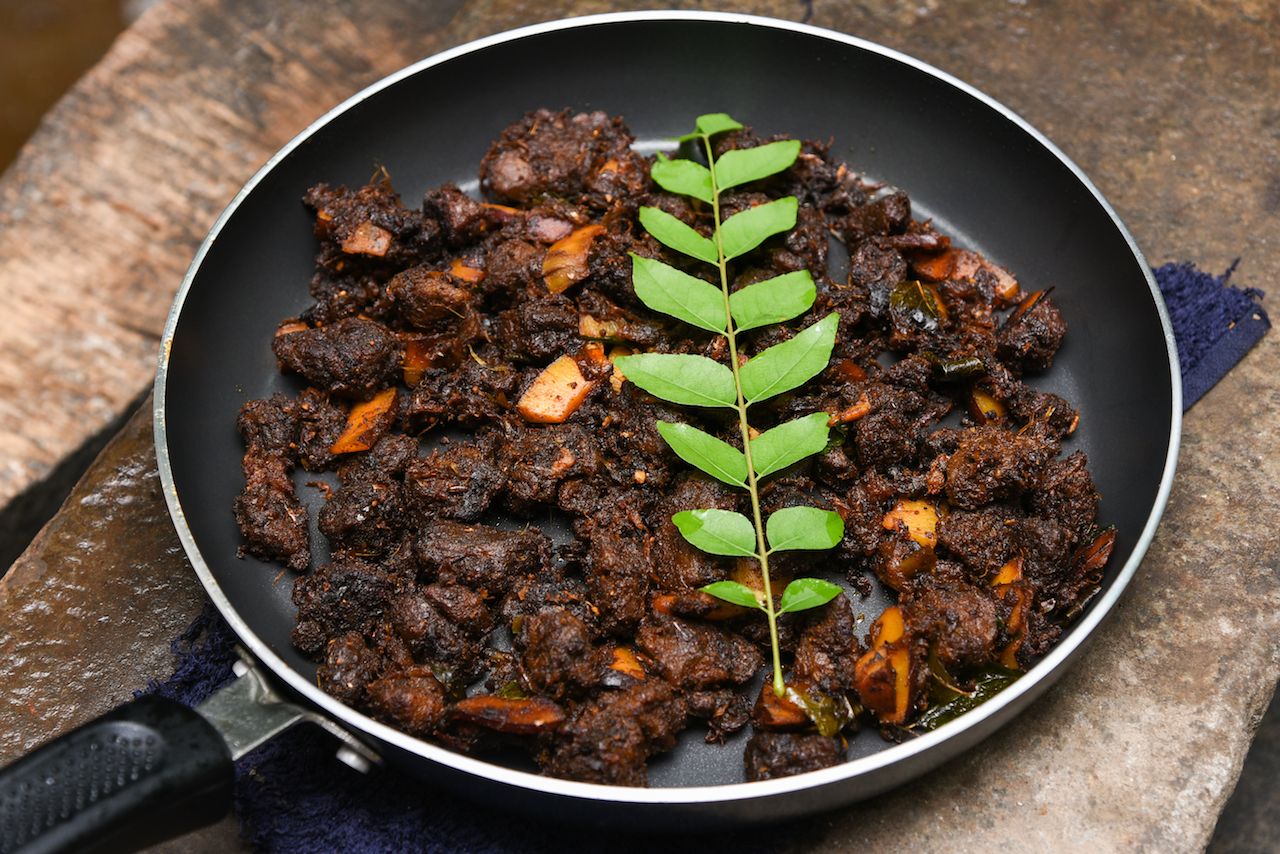 While not many people associate India with eating beef, the southern Indian state of Kerala is famous for its beef fry. A recipe beloved by many, a traditional Kerala beef fry is typically prepared with onions, ginger, garlic, curry leaves, and slivers of coconut sautéed in a generous amount of coconut oil and topped with a medley of spices like black pepper, cumin, cloves, and roasted chilies. Pair it with parotta (a multi-layered flatbread) and prepare for your perspective of Indian cuisine to be forever changed. 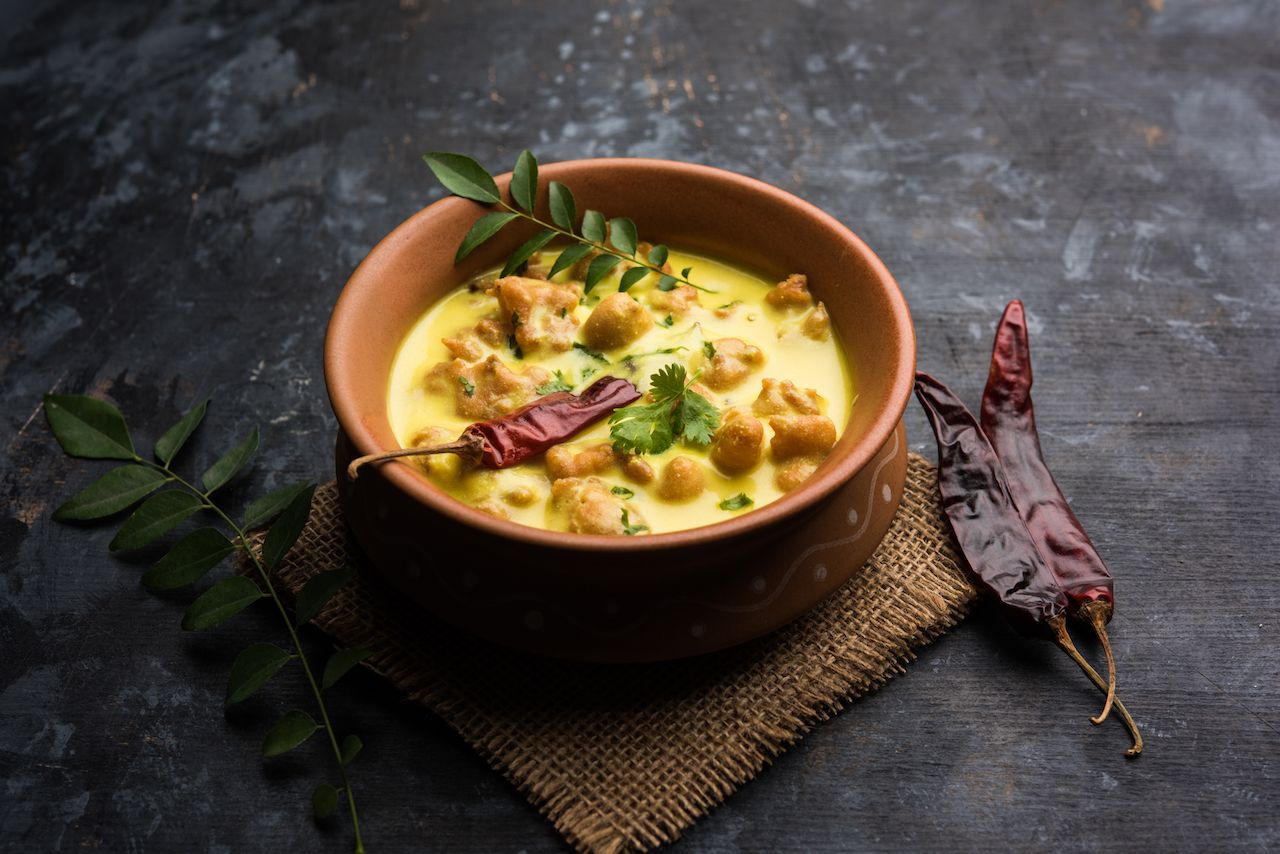 Every region in India has a distinct version of kadhi, but at its most simple, it’s a spiced, yogurt-based curry with a balance of sweet, sour, and savory flavors. It’s perfect for anyone who prefers to steer clear of spicy Indian dishes. Kadhi is thickened with chickpea flour and spiced with dried red chilies, cumin, fenugreek, and mustard seeds. While the Punjabi version of Kadhi is thicker and comes laden with deep-fried besan pakoras (chickpea flour dumplings), Gujarati kadhi is slightly thinner and sweeter to taste. In south India, coconut, ginger, garlic, and curry leaves are added, as well. Kadhi is often eaten with rice and roti. 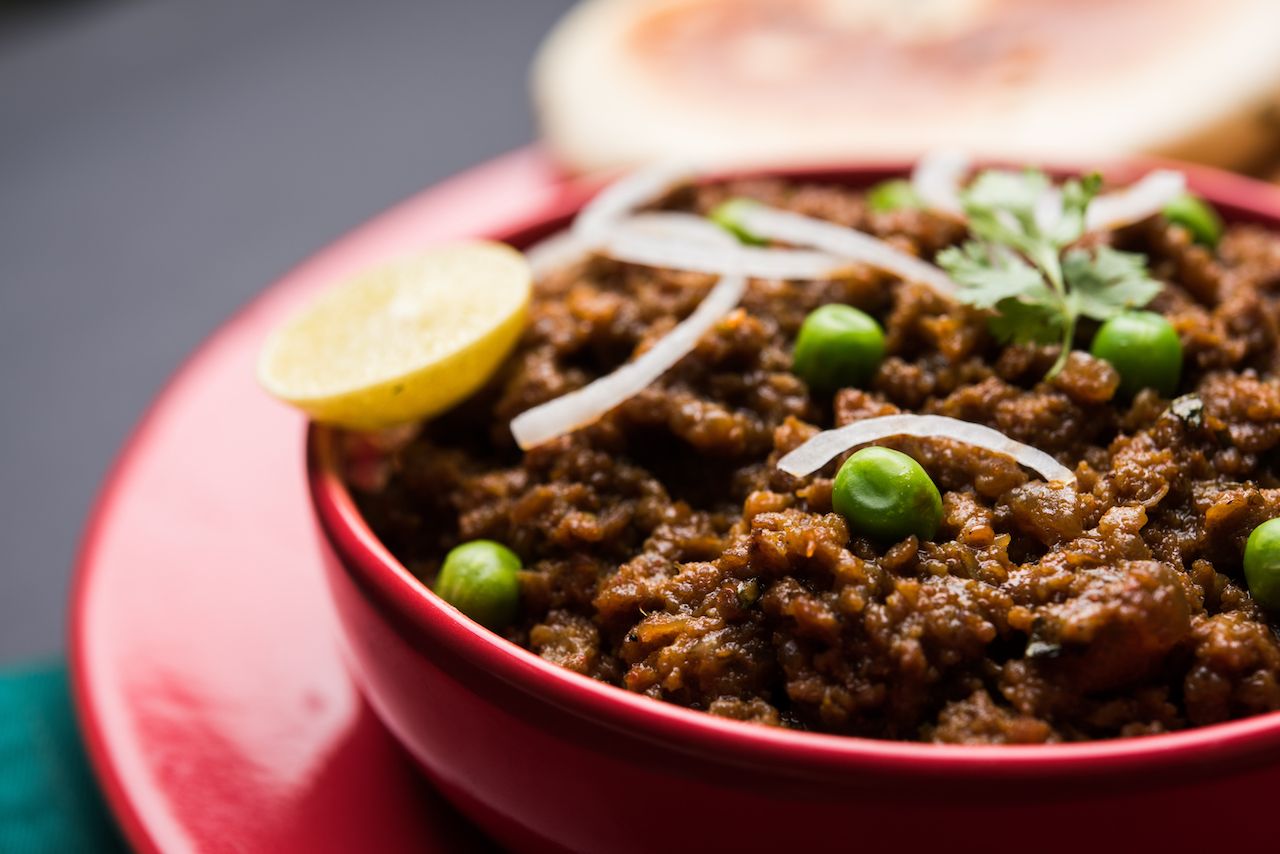 Kheema is a traditional Indian dish made with minced meat that’s simmered with spices like cumin, coriander powder, and garam masala (a mixture of several ground spices). Typically made with mutton, beef, or chicken, kheema (which translates to “minced meat”) is like the chili of India and often comes with potatoes and peas. The flavorful combination of onion, garlic, ginger, tomatoes, and earthy spices with ground beef makes this a hearty and comforting dish in the winter. 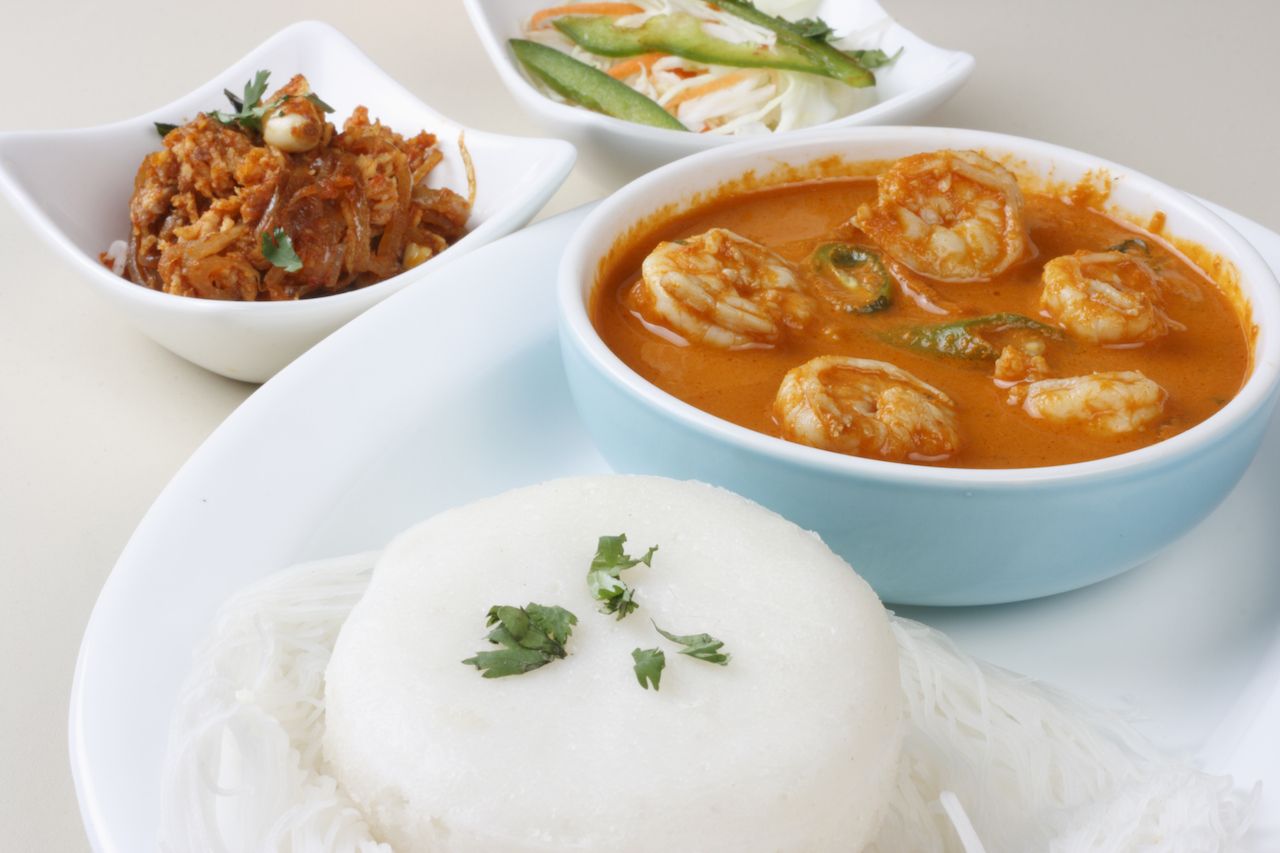 Seafood is an integral part of the cuisine in the tiny state of Goa on the western coast of India. Seafood lovers would be remiss not to try Goan prawn curry — a spicy and sour coconut-based curry seasoned with tamarind. It’s sweet and sour and pairs beautifully with prawns. This fragrant curry is rich in flavor and often served with steamed rice. 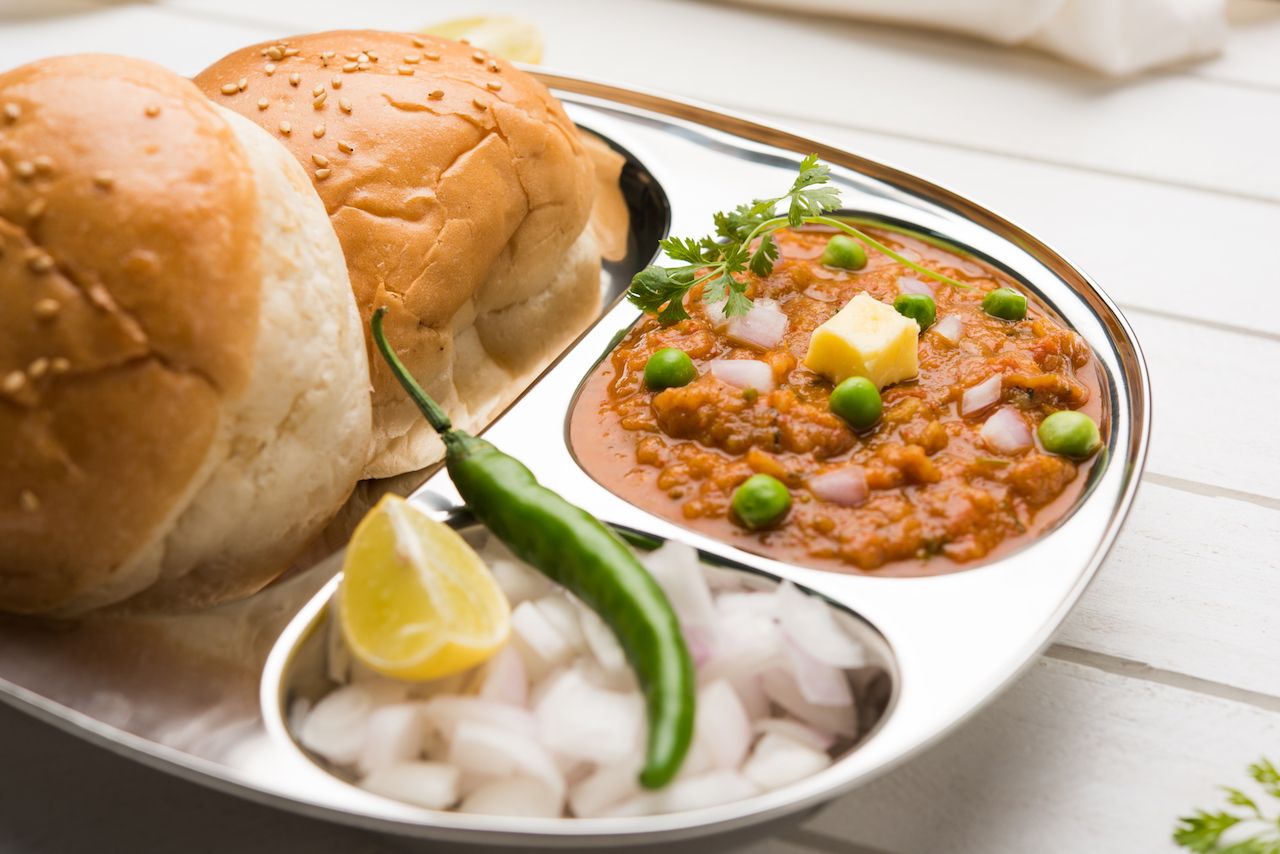 Think of pav bhaji as the Indian version of sloppy Joes — but vegetarian. This dish is a popular street food in India and is essentially a spicy, tangy medley of bhaji (vegetables) simmered in an onion and tomato base. Spiked with spices, this delicious dish is served with pav (a Portuguese bread common in many western India street foods), lemon slices, and a sprinkling of red onions.

Food + DrinkWhy Mumbai’s Most Popular Street Foods Are Made With Portuguese Bread
Tagged
Food + Drink India
What did you think of this story?
Meh
Good
Awesome