Even dishes that a country considers most traditional can come from somewhere else. Ingredients and recipes cross borders and transform, each meal containing its own narrative. This is as much true in India as anywhere else. Here, certain foods are one of the more benign legacies of colonization. And few dishes are a better example of this than pav, a soft Portuguese bread roll that’s a beloved component of some of Mumbai’s favorite street foods.

In 1498, Portuguese explorer Vasco da Gama landed on the western coast of India. His arrival signaled the beginning of Portuguese colonization on the coasts of India that would last until 1961. The early traders brought food from the Americas like potatoes, tomatoes, and chilies. They also brought the preference for leavened bread, pão in Portuguese, which was the only type of bread that could be used for Catholic Communion during Mass.

In the state of Goa on the western coast of India, the Portuguese pressured Goan cooks to make leavened wheat bread. India had ample wheat flour, but bread yeast was difficult to source, Lizzie Collingham wrote in her book Curry: A Tale of Cooks and Conquerors. The cooks turned to toddy, a palm sap alcohol, to ferment the dough. Thus, pav was born.

Portugal ruled Goa as a colony until it was liberated in 1961, 14 years after India gained independence from Britain. Over time, people in the country started serving pav alongside traditional dishes. Commuting workers took to pav filled with other ingredients because of its easy portability. 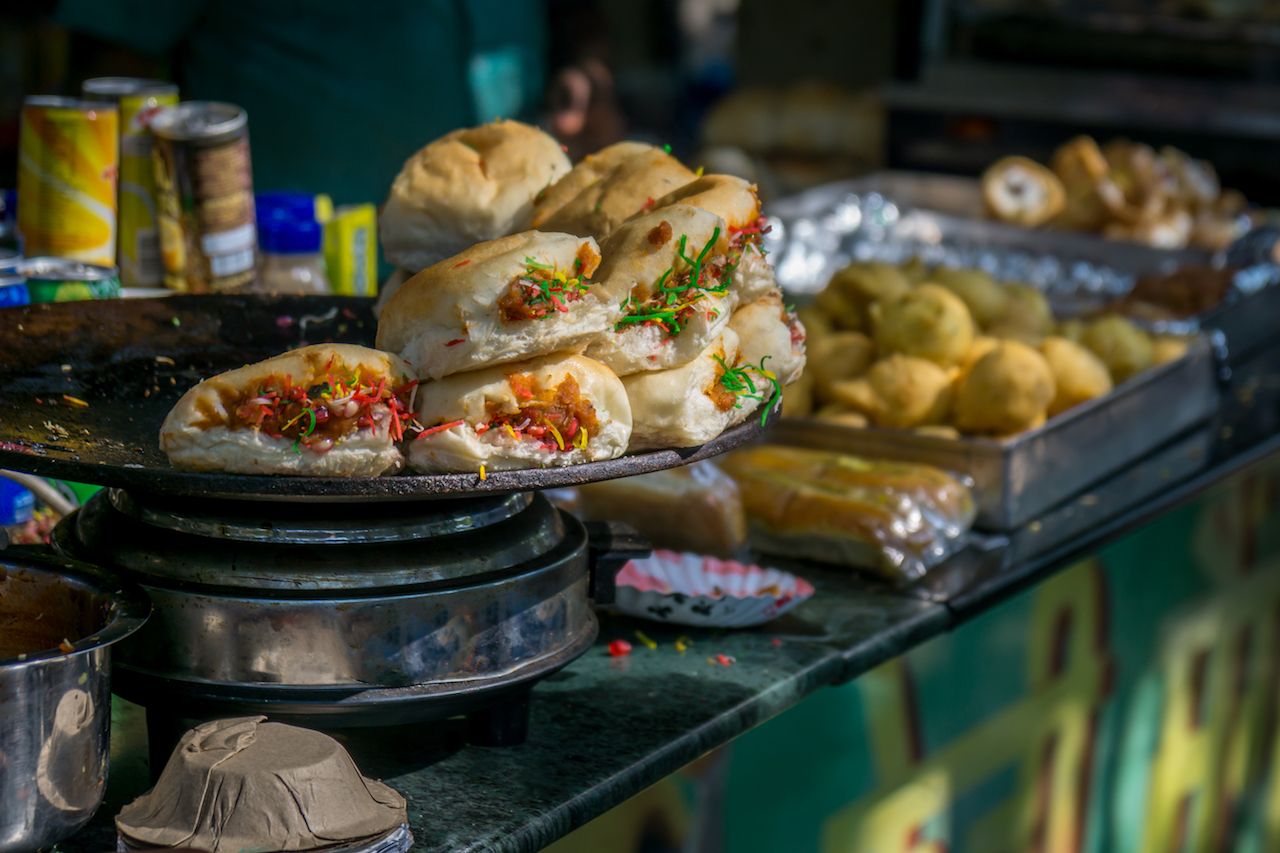 Over the years, especially the years after liberation, many Goans migrated to Mumbai in search of work. Parsi immigrants from Iran went to Mumbai and joined the workforce as well, adapting pav into dishes served at traditional Irani bakeries and cafes. Pav was served with meat, curries, vegetables, and fried potatoes — all manner of dishes received the pav treatment.

Today, pav is still seen as fast and convenient food. It’s no longer just for the working class anymore, however. Even Bollywood celebrities in Mumbai can’t get enough. The humble pav has gone from being a Goan-Portuguese specialty to something eaten by Indians everywhere. Pav-based meals are served 24/7, and no trip to Mumbai would be complete without sampling as many as possible. 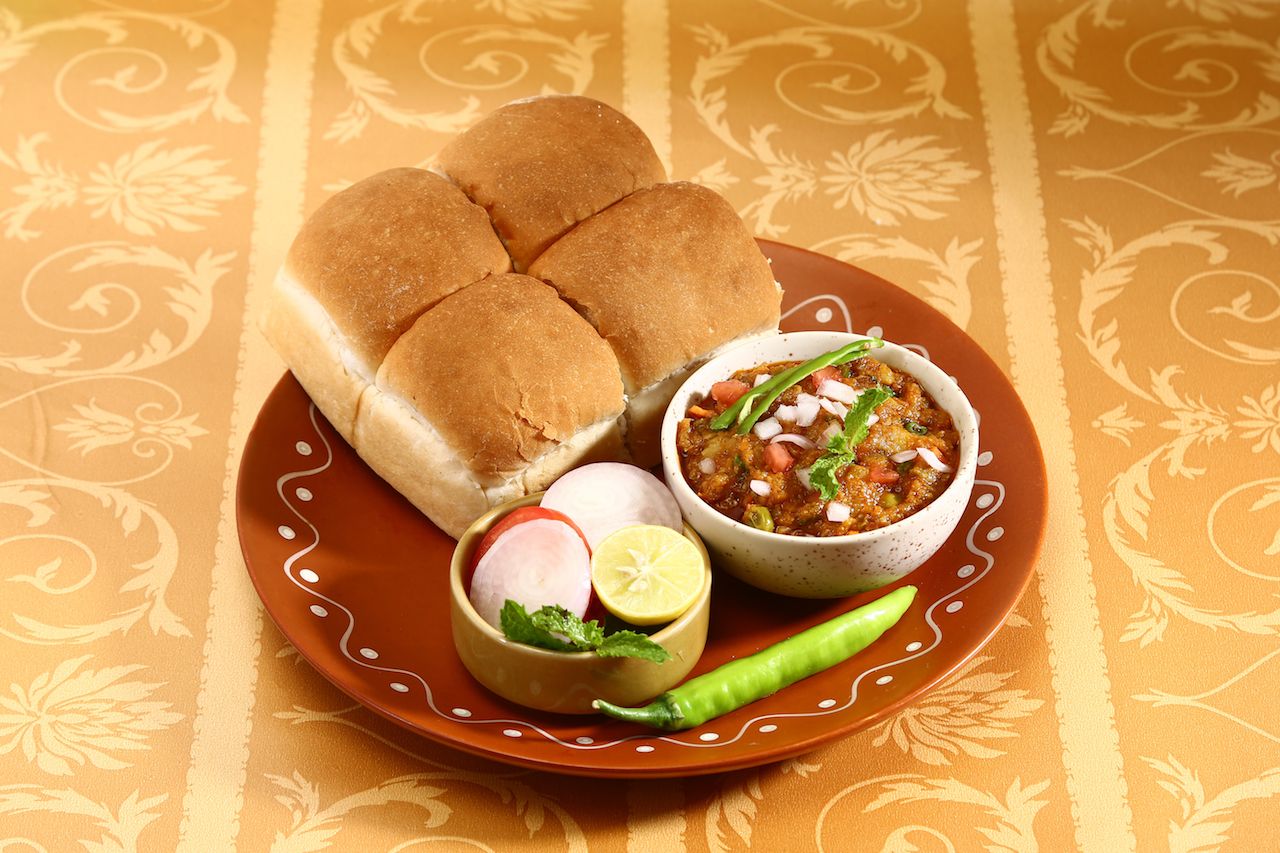 One of Mumbai’s most popular street food is pav bhaji. It consists of butter-drenched pav served with a spicy vegetable curry, tomatoes, and diced raw onion with a slice of lemon. The richness of butter, acidity of tomato, and soft bread are an addictive combination.

There’s a debate over when pav bhaji was invented, although some accounts date it back to as early as 1840. Mumbai’s cotton merchants would leave work early in the morning after receiving cotton prices from America. Nearby food vendors made a curry from leftover vegetables to cater to the workers, which evolved over time into the pav bhaji seen in Mumbai today. 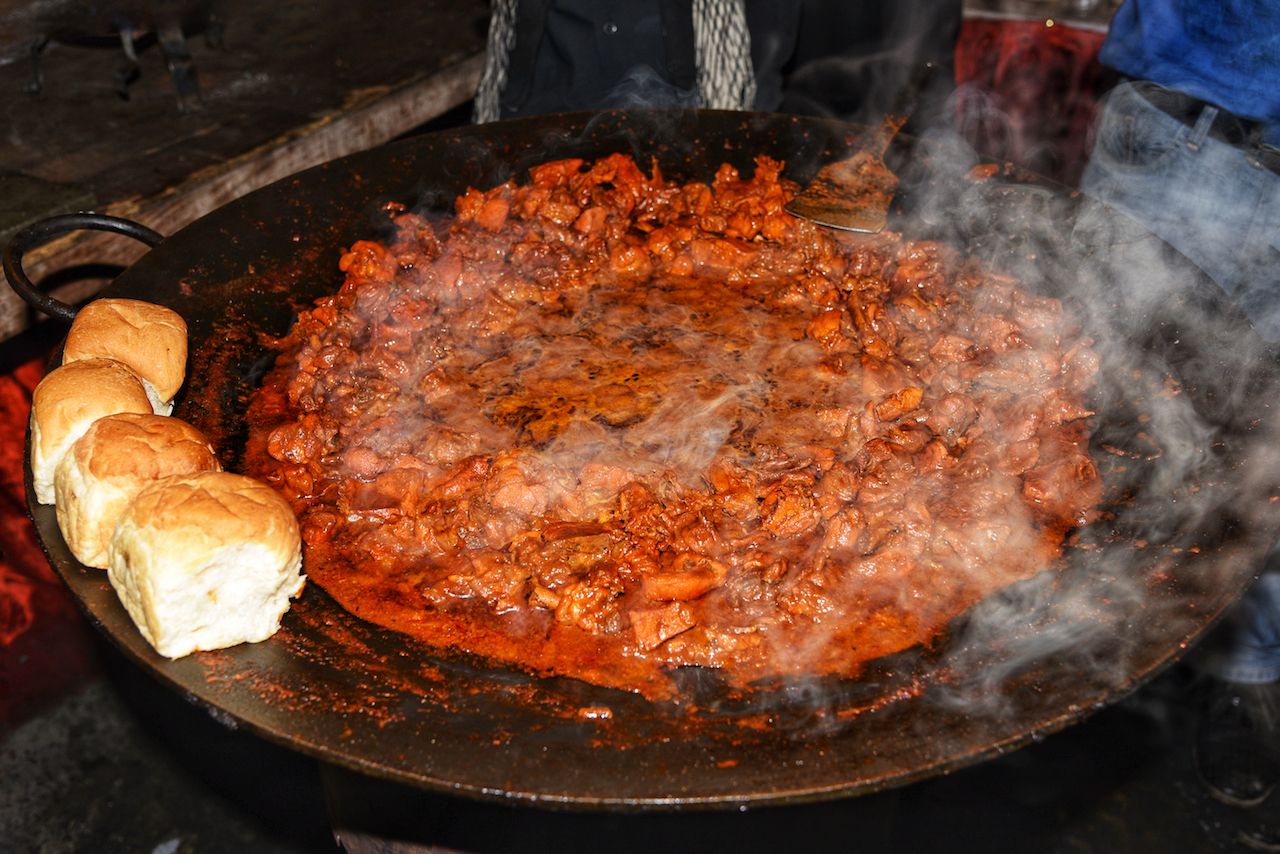 Kheema pav was originally served in Mumbai’s Irani cafes before it became a popular street food. Kheema is minced meat that’s simmered with tomatoes, chili, ginger, garlic, and spices. The meat fat provides a similar richness to the butter in pav bhaji, and the soft bread is perfect. 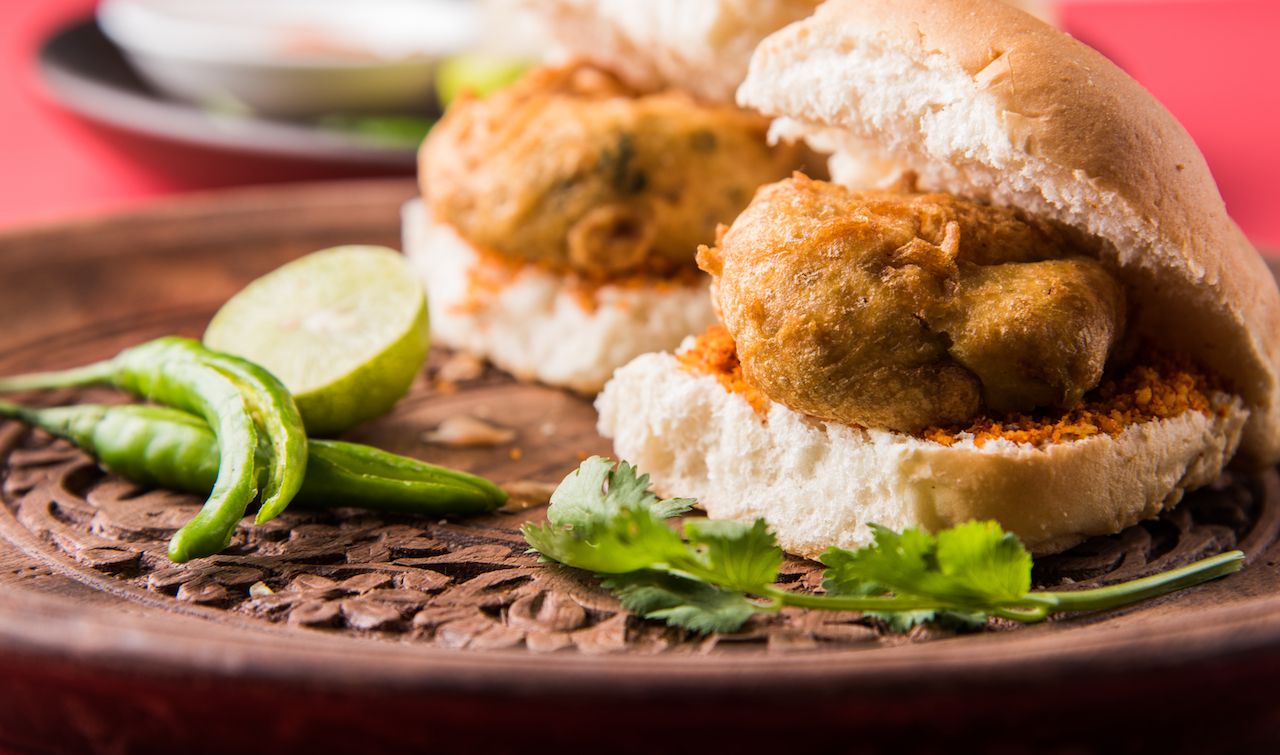 Vada pav is made with a spiced ball of mashed potatoes that are covered in batter and fried. Then it’s placed inside a pav that has spicy chutney spread inside. It’s as much of an absolute carb bomb as it sounds.

Vada pav was invented in the 1960s by a street vendor named Ashok Vaidya, who worked outside of Dadar train station in Mumbai. Realizing that busy commuters didn’t have time to stop for food, he came up with a filling snack that could be eaten on the go. The vada pav quickly took off and is now one of the most popular street foods in Mumbai. 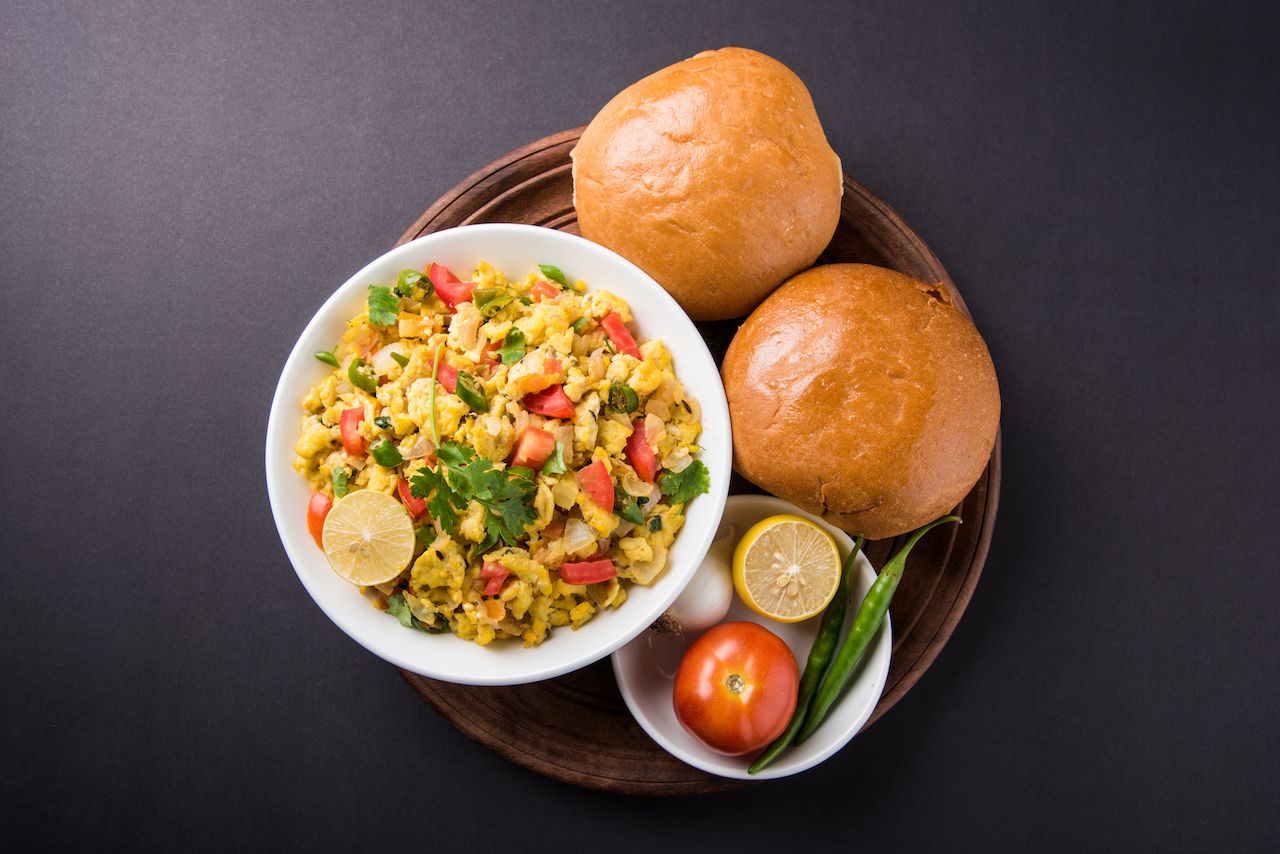 This dish is an example of how pav made its way into other meals. Bhurji is India’s version of scrambled eggs made with onions, tomatoes, and spices. Street stalls in Mumbai serve bhurji with hot buttered pav for a breakfast on the go. 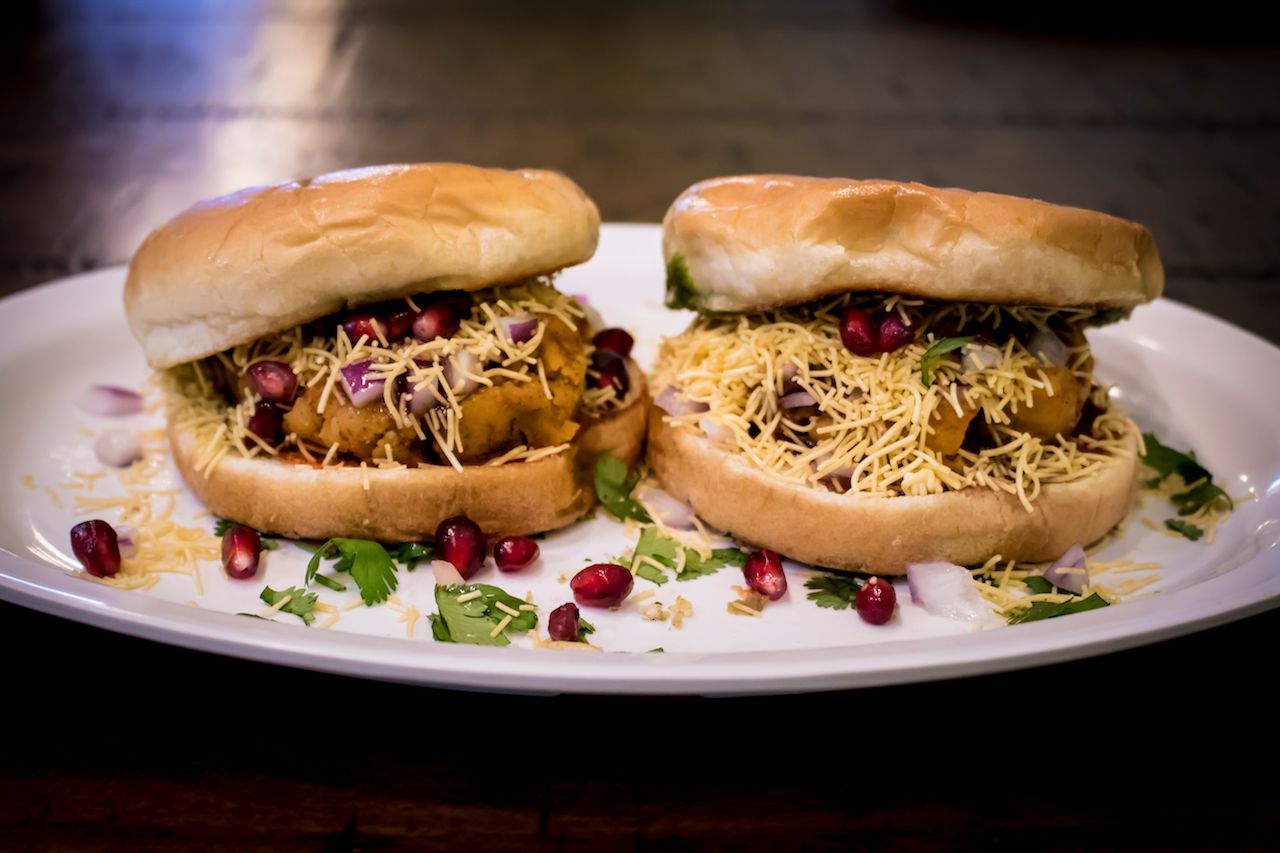 Dabeli means “pressed,” and is said to have been invented by Keshavji Gabha Chudasama in Mandvi, a town in Gujarat. Spiced mashed potato is sandwiched between a pav smeared with date and tamarind chutney. Roasted peanuts, pomegranate seeds, and sev (crispy gram flour noodles) are added for texture. Dabeli is a popular snack in Gujarat and Mumbai, and the taste is a mix of sweet, salty, and spicy.

Food + DrinkThe top 10 street food dishes of Delhi and where to find them
Tagged
Food + Drink Mumbai, India
What did you think of this story?
Meh
Good
Awesome

On my way to work: Mumbai

Mumbai brings art to everyone at Kala Ghoda arts festival

These compromised clothes: A look inside India’s informal garment industry