Burns Night, one of Scotland’s most beloved holidays, starts with Scotch whisky and climaxes with a passionate stabbing of a haggis. Every year on January 25, people around the world gather to read poetry, drink whisky, and, most importantly, celebrate haggis. It’s all in honor of Robert Burns, the 18th-century poet who wrote “Address to a Haggis” in 1786 and who is considered the national poet of Scotland to this day.

Often at Burns Night celebrations, it’s Scotland’s national dish that steals the show. Burns Night is the best night of the year for haggis lovers, the haggis curious, and anyone who just wants to get a taste of a dish that, depending on your company, is either reviled and mocked or held to the highest esteem.

My own first Burns supper started with plenty of Aberlour whisky, segued into a feast of haggis, and ended with a Burns poetry reading by Brian Cox and a group singing of “Auld Lang Syne,” another of Burns’ poems. This particular celebration was in New York City, but Burns suppers far and wide follow a similar progression.

The night can be as loose or as formal as the party decides. Katie Scott Aiton, Matador Network’s lifestyle editor, who is Scottish, had three Burns Night celebrations on her calendar for 2020. Some are dull, she says, and consist mostly of “old people just reading poems,” while others are more modern. One non-traditional Burns Night party she recently attended was run by a theater group that took “the piss out of Burns,” adding that the poet “was a funny man, so the mix between the comedic actors and the poetry and song was great.”

Traditional, dull, or modern, what each Burns Night celebration has to have is an enthusiastic reading of “Address to a Haggis,” usually performed by the host.

“Traditionally [reciting the poem is] to welcome the food to the table, to honor our national dish,” Aiton says of the poem and the Selkirk Grace (a prayer also written by Burns) recited before eating. “People take it quite seriously.” 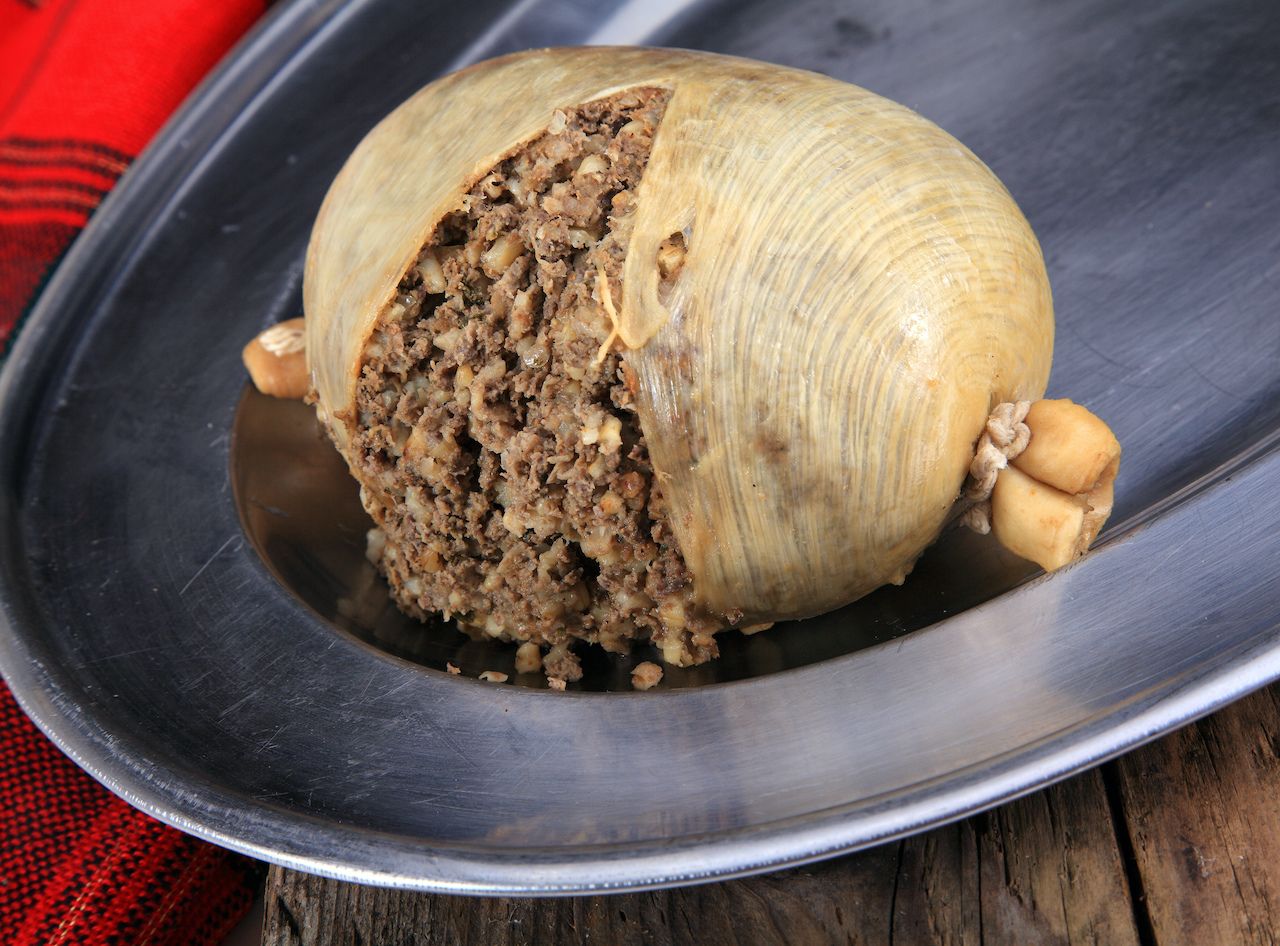 And why not take haggis seriously? Haggis is a pudding (a term which, in the British Isles, can also refer to a savory dish) traditionally made with mutton, offal (think lungs, heart, liver, and kidneys), oatmeal, onions, pepper, and other spices. The mix is stuffed into a sheep stomach (much like how hot dogs and sausages use intestine casings) and boiled. Haggis tastes of gamey meat and strong seasonings. Modern haggis interpretations are put into breakfast rolls and added to fry ups. There are even vegetarian haggis versions made with peas, barley, and mushroom.

Traditionally, it was the Scottish working class that consumed haggis. They’d combine leftover bits of meat to create a hearty meal, but it’s elevated by the words of Robert Burns every year. And yes,bagpipes are sometimes involved.

It’s only fitting that Scotland’s Immortal Bard chose haggis to herald. Burns was born in Alloway, Scotland, in 1759 to a farming family caught in the transition from an agriculture-based world to an industrial one. He returned to farming intermittently throughout his life between writing, philandering, and a stint toward the end of his life as a tax collector. Regardless of his position, he celebrated rural Scottish culture in his published work. Burns wrote in Scots, a vernacular that lost traction in Scotland as common English took over during Burns’ lifetime. This timing helped make Burns old Scotland’s last writer. As the Poetry Foundation puts it, “Burns remains the national poet of Scotland because Scottish literature ceased with him, thereafter yielding poetry in English or in Anglo-Scots or in imitations of Burns.”

Burns earned a level of fame during his lifetime as the voice for the everyman Scot. In a letter to a friend at the end of 1786, he wrote that he was on his way to being as well-known as famous English writers like John Bunyan. He added, “You may expect henceforth to see my birthday inserted among the wonderful events, in the Poor Robin’s and Aberdeen Almanacks.” It’s unlikely he could have known just how true that statement would become.

Burns died at 37 on July 21, 1796. His friends gathered for years after on his death day to celebrate the man. The celebration shifted over time to the less macabre date of his birthday. By 1859, what would have been his 100th birthday, Burns celebrations were widespread in Scotland and beyond. The climactic highlight of these parties is still the “Address to a Haggis.”

A full version of the original “Address to a Haggis” can be found on the BBC, while numerous sources translate the eight-stanza poem from the old Scottish dialect. Just don’t expect the person giving the speech to translate for you. What you can expect, however, is a well-worn ritual leading up to eating.

First, the haggis is brought into the room on a plate, occasionally with a bagpipe progression depending on how intense the party is. The host begins reciting the poem, often acting out what’s depicted. Things come to a head in the third stanza when the host wipes the ceremonial knife and stabs into the haggis while reciting:

“His knife see rustic Labour dight,
An’ cut you up wi’ ready sleight,
Trenching your gushing entrails bright,
Like ony ditch;
And then, O what a glorious sight,
Warm-reekin’, rich!”

The energy isn’t lost as the fourth stanza describes how people rush to eat haggis and the fifth and sixth stanzas mock the effete elite who prefer French and Italian cuisine. The final two stanzas state how haggis made Scotland strong, and if you want the country to love you, feed them haggis.

Partake in a Burns supper and you, too, will be singing praises for this humble Scottish dish.

HikingScotland’s Speyside Whisky Trail Is a Tough Trek With Delicious Perks
Tagged
Food + Drink Holidays
What did you think of this story?
Meh
Good
Awesome

May 4, 2022 Suzie Dundas
✖
travelstoke
Download the mobile app
stoked by