California is pretty mind-blowing. Within a few hours, you can explore some combination of incredible landscapes — from rugged coastlines and jagged mountains to lush forests, dark caves, or captivating deserts. The fact is, the Golden State has some of the country’s most stunning and unique scenery. It’s no wonder that it has more national parks than any other state. But deciding which of California’s nine parks to visit can be tough. We’ll help you decide by listing the single best things about each park. For good measure, we’ll include the top things to do at all of them, as well. 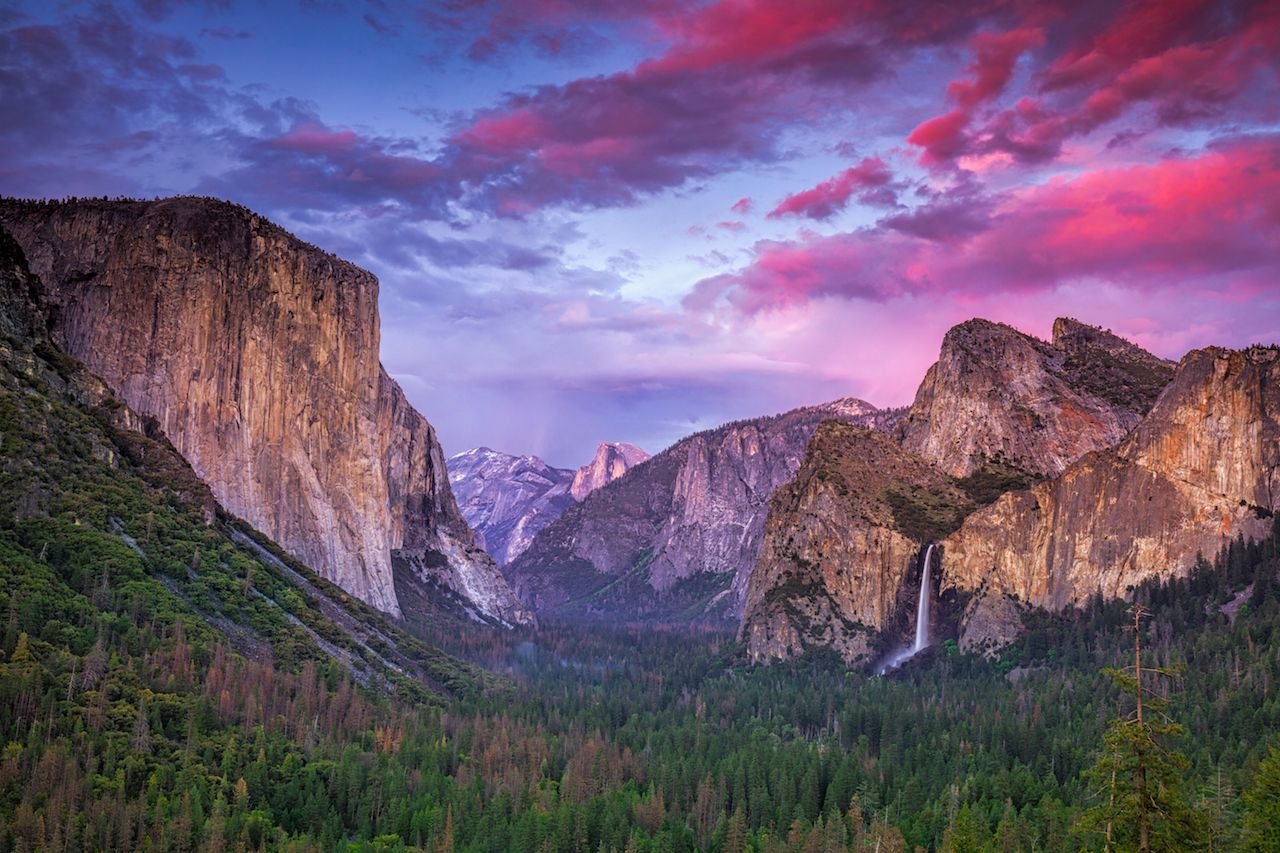 Yosemite National Park is one of the most majestic and iconic parks in the US. Located in northern California’s Sierra Nevada range, Yosemite is probably best known for its granite cliffs of Half Dome and El Capitan, the world’s largest granite monolith. In fact, standing near the base of El Cap and gazing up at the site of Alex Honnold’s incomprehensible climb, memorialized in the Oscar-winning Free Solo, is one of the best things about Yosemite.

But there’s something that tops even that. It’s the sweeping vista of the entire Yosemite Valley, made famous by Ansel Adams’s black and white photographs, a sight everyone should savor at least once. The best place to catch this view — which includes El Cap, Half Dome in the distance, and Bridalveil Falls — is from the Tunnel View point.

After you’ve crossed the iconic vista from your top 10 bucket list, head into the valley to take in some of Yosemite’s other incredible highlights. At any time of year, this will involve braving tourist crowds — so get an early start each morning. Many of the trails in Yosemite Valley are gentle flat trails that lead directly to top attractions. Popular hikes include Tuolumne Meadows and Mariposa Grove, where you can walk through a massive sequoia forest. On Southside Drive, short trails lead to Bridalveil Fall and the Sentinel Bridge, another spot for Half Dome views. If you’re hardy hikers with sturdy shoes, the Yosemite Falls hike takes you three miles steeply uphill — and then you have to head back down. 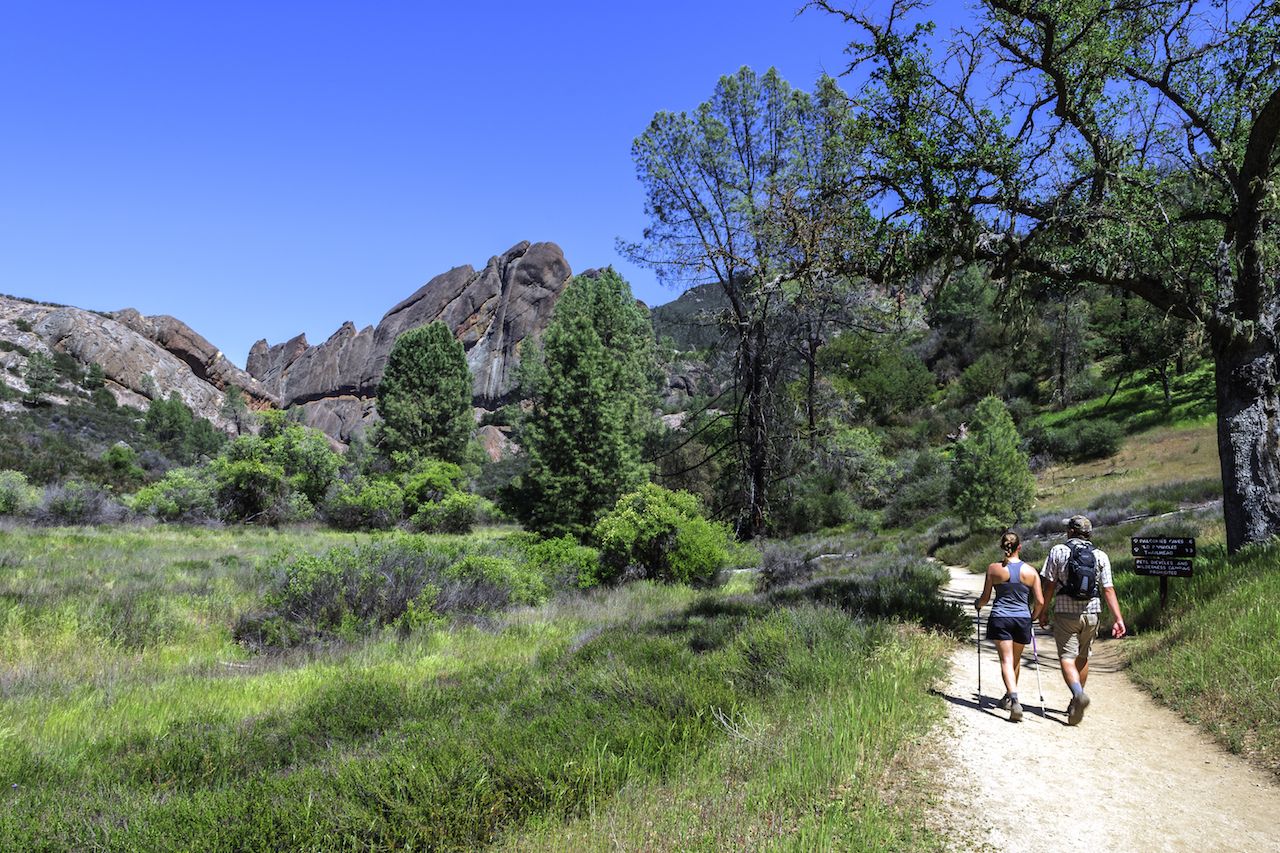 The newest of all the California national parks is Pinnacles. Designated a national park in 2013, Pinnacles is about an hour away from Monterey County. It gets its name from the huge domed spires that were created out of the volcanic activity — and it’s this very unusual geology that is the most special thing about this park. In addition to the photogenic spires, the park has two caves that you can hike through and that house local bat species.

The second best thing about pinnacles is that it’s home to condors, regal birds whose wingspans reach nearly 10 feet across. Since condors don’t migrate, you can see them from certain viewpoints all year. You can catch them while hiking, and two paths we recommend are the Moses Spring Trail and Bear Gulch Cave Trail. Both treks take you to caves and offer views of the volcanic structures. Rock climbing is also very popular on the west side of the park, and there are routes for beginners and advanced climbers alike. This park is one of the least-visited in California, another bonus if you don’t enjoy the crowds. The park only has one campground, which is busiest in the spring and fall months, when temperatures are milder. 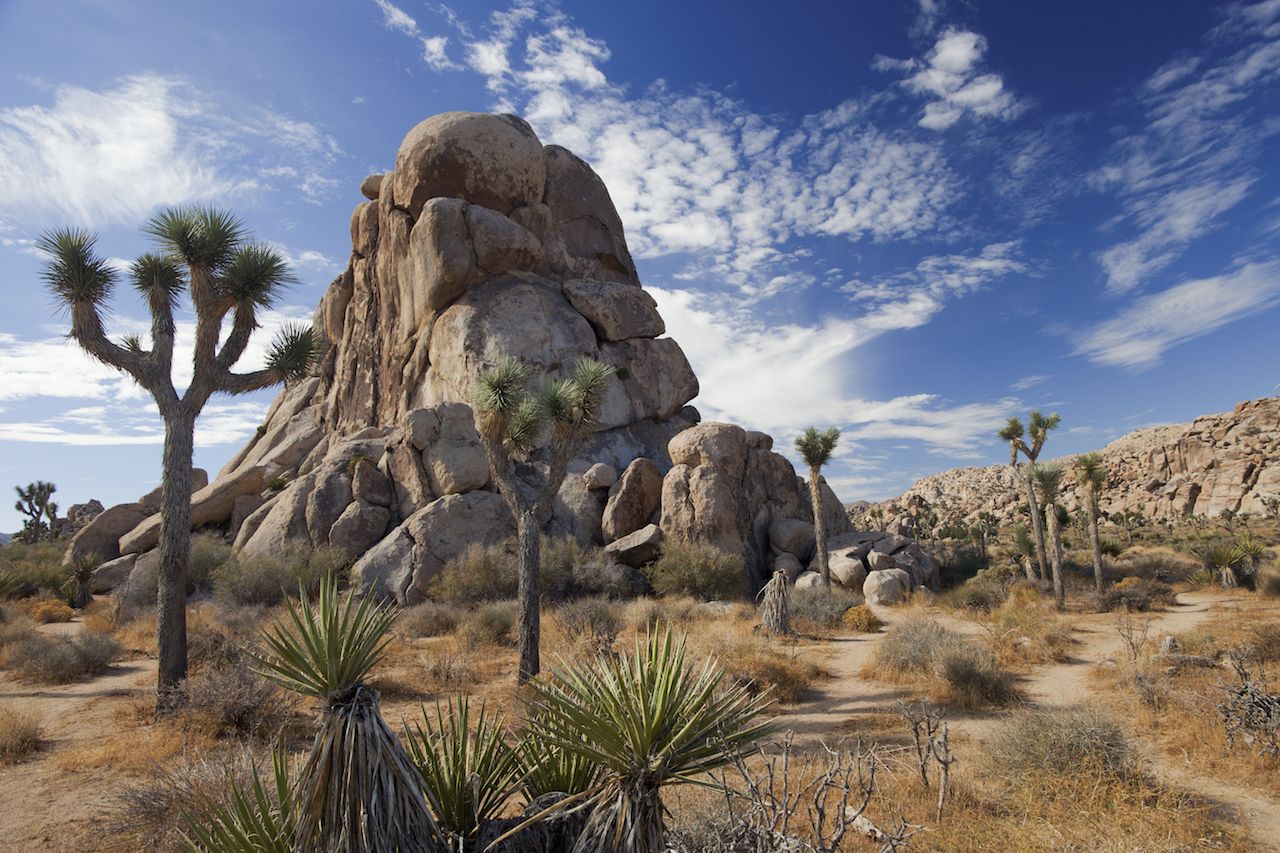 Joshua Tree National Park, located just two hours outside of Los Angeles, is beloved for its namesake Joshua trees. The Dr. Seussian plants are not actually trees but yucca plants. The desert’s unique landscape of high Mojave desert meeting low Colorado desert, combined with mountains and valleys, make this national park a place of stark contrast. Add in the magical Joshua Trees, and you have an almost mystical aura that is found only here — which is the most notable feature of this park.

Popular hikes here include Indian Cove Natural Trail, a great place to see the Joshua trees, and Cholla Cactus Garden, where you can see a dense concentration of cactus plants. Joshua Tree National Park also has huge boulders that have become a rock climbers’ paradise. You can scramble some of the smaller boulders on Arch Rock Trail or watch the rock climbers at Echo Cove. For sweeping views of the valleys and nearby peaks, head to Keys View, the highest point at Joshua Tree National Park.

Redwood National Park: the tallest trees in the world 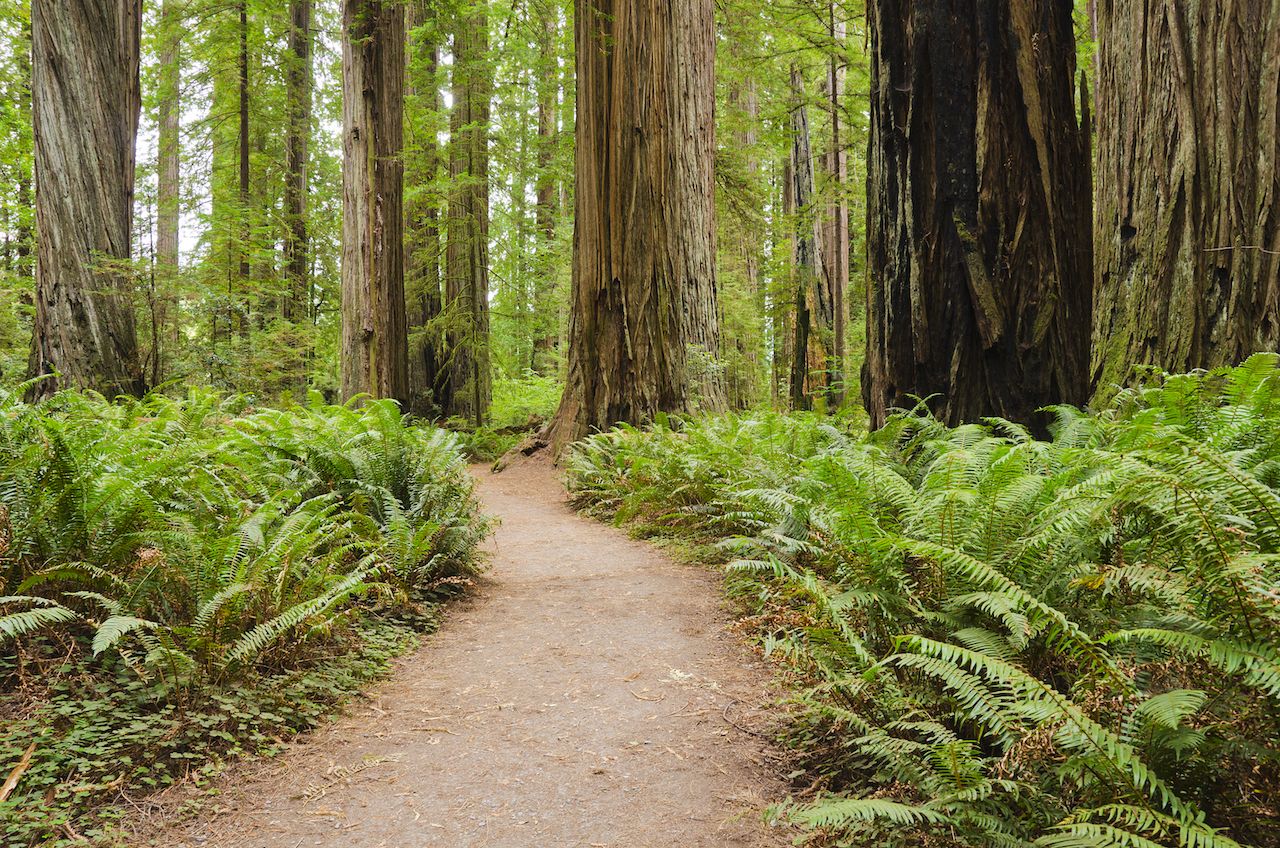 The famed redwood trees that grow along California’s northern coast are simply astonishing, and they’re the number one reason to visit this park. These trees can grow upwards of 350 feet tall; looking up at them can take your breath away. Redwood National Park is actually a huge area that contains a clustered network of three state parks, Prairie Creek, Jedediah Smith, and Del Norte. The most popular hike in the area is Fern Canyon, which was actually a filming location for Jurassic Park 2. Walking through this densely forested canyon does make you feel like you’ve stepped back in time.

Tall Trees Grove is where the tallest of the redwoods reside. Getting here requires a free permit from Kuchel Visitor Center, which helps to keep the number of visitors to a minimum. This area is also known as prime kayaking, mountain biking, river fishing, and horseback riding location. Several tour companies take visitors on half-day or full-day excursions to show them the beauty of the North Coast.

Taking a national parks road trip through California? Check out Matador’s guides to the best places to stay near the parks: 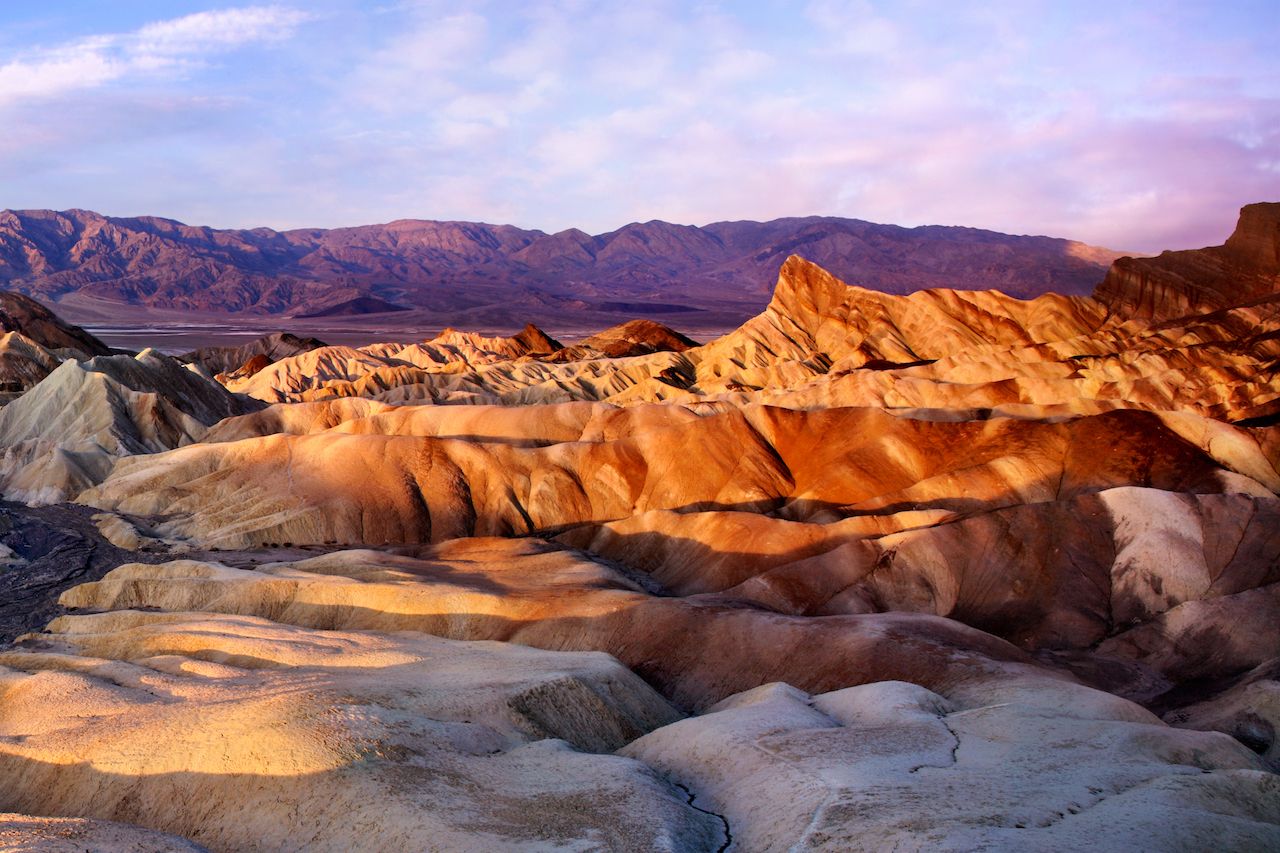 Death Valley is a land of extremes. It holds the record for the hottest temperature in the world, 136 degrees Fahrenheit, and is the driest place in North America, seeing an average of two inches of rainfall a year. But the most remarkable thing about Death Valley isn’t its record-beating heat. Rather, it’s the startling, eerie beauty that one would hardly expect in such a harsh and arid environment.

If you’d like to see all the shades of yellow and orange against the golden cliffs, then you must drive up to Zabriskie Point or hike the two-mile Golden Canyon for views of the sunrise or sunset. Another must-see is the Badwater area, which is the location of America’s lowest point at 282 feet below sea level. A drive down Badwater Road lets you see the salt flats and puddles, which are all that remain of an ancient dried up lake. A walk through the Mesquite sand dunes offers a chance to see some wildlife, like a coyote or a desert fox. For another unique hike, check out Ubehebe Crater, where you can walk along the rim of an ancient volcano. 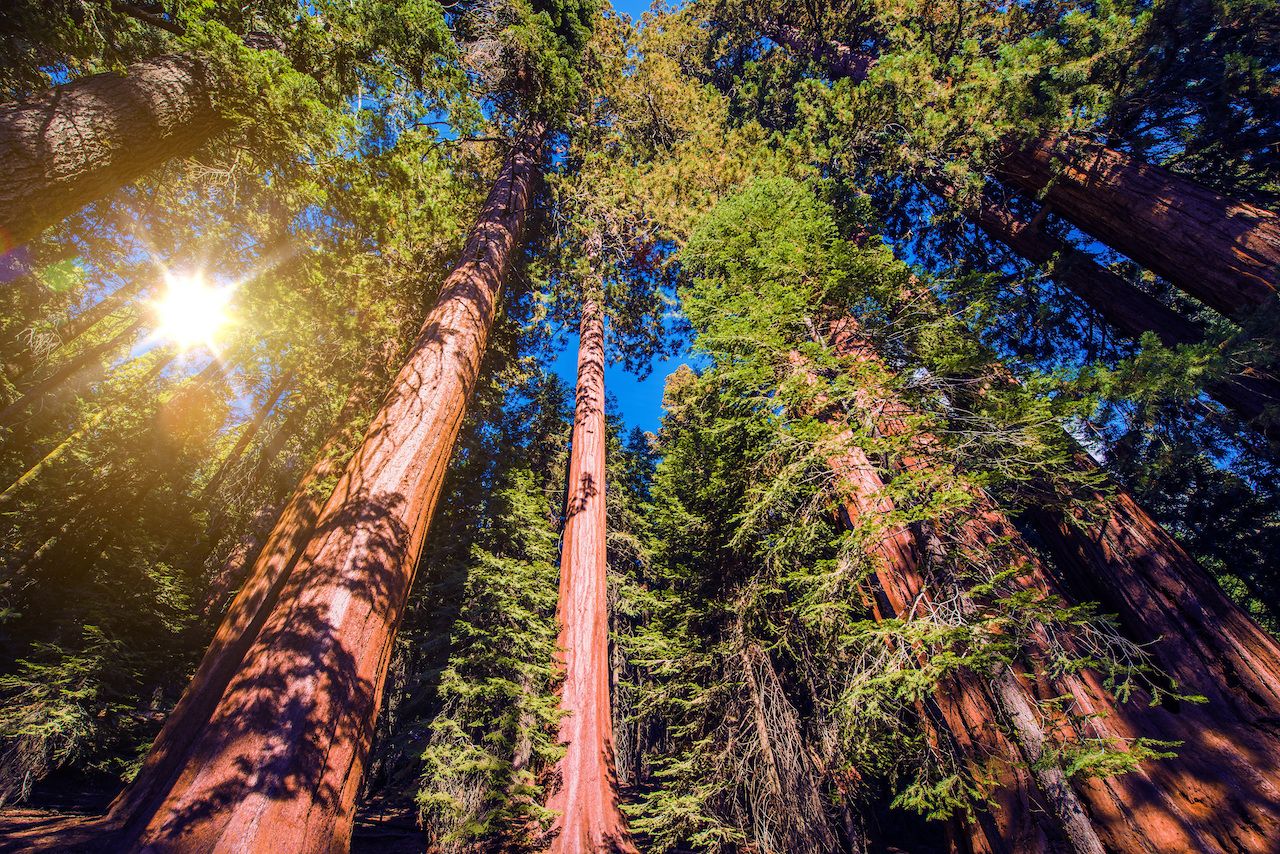 Sequoia and Kings Canyon National Park are technically two parks, yet they’re administered jointly. Located just 75 miles south of Yosemite, they’re often overlooked in favor of their famed southern neighbor. Yet that fact is one of the top reasons to visit the parks. While they share much of the same topography, flora, and fauna of Yosemite, they don’t get the same throngs. You can gaze at soaring granite formations like Grand Sentinel while on a serene, uncrowded walk through Kings Canyon’s Zumwalt Meadows.

That said, the number one thing about these parks is their majestic Giant Sequoia trees. To visit the General Sherman Tree, the largest living organism in the world, you walk on the Congress Trail through an awe-inspiring forest of these massive trees. The world’s second largest tree, the General Grant, is in Grant’s Grove in Kings Canyon. You can also drive through a Giant Sequoia that fell in 1937 at Tunnel Log or weep at man’s folly on the Big Stump Trail.

Sequoia is also home to 14,505-foot Mt. Whitney, the highest peak in the contiguous United States. You can admire some of the parks’ snow-capped peaks from Panoramic Point, a 7,000-foot overlook with vistas of Kings Canyon and Hume Lake. Another place for sweeping views is the top of Sequoia’s Moro Rock, a granite dome you can ascend on an intimidating stairway cut into the stone. There are even stalactites to check out at Sequoia’s Crystal Cave. 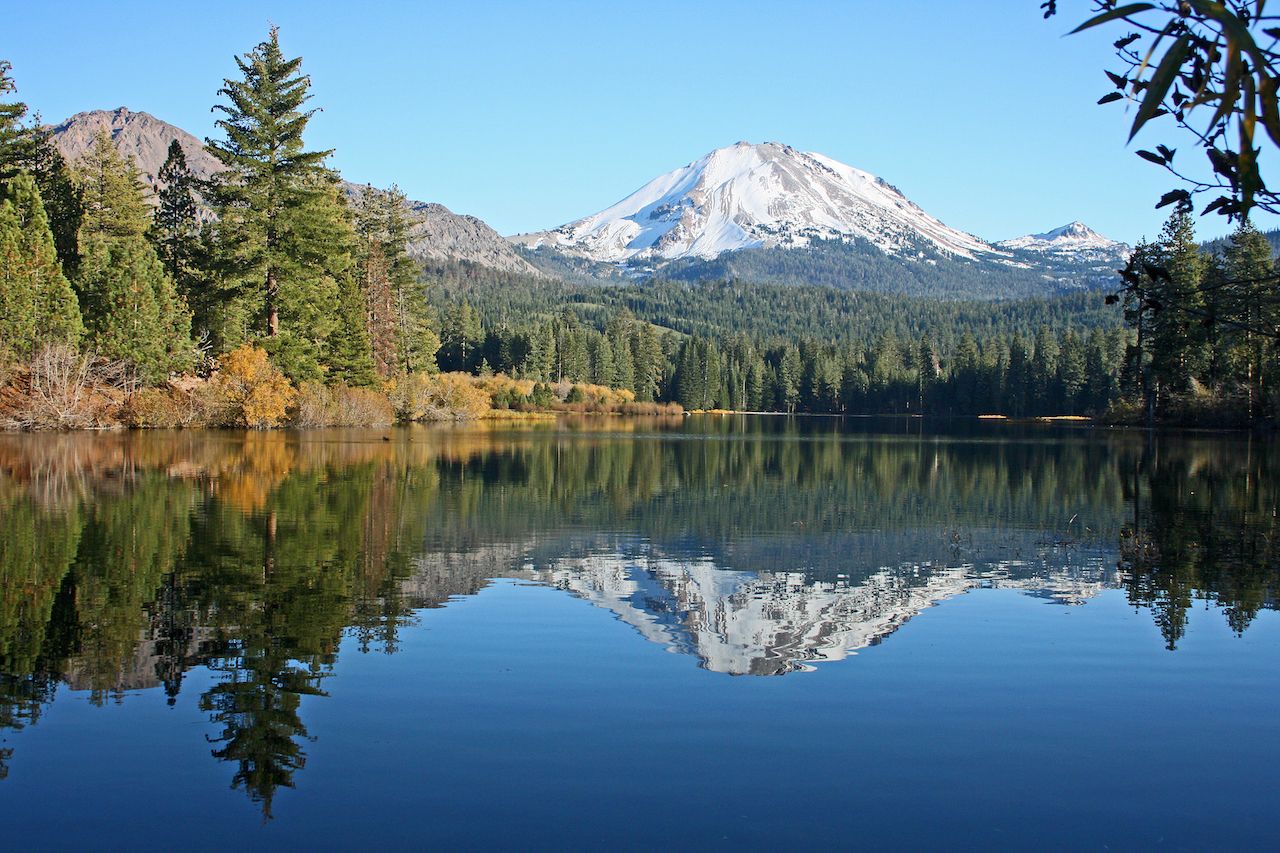 Found in the Shasta Cascade region, Lassen Volcanic National Park does not get the recognition it deserves. It’s named after its signature volcano, Lassen Peak, the largest plug dome volcano in the world. Most of the national park is filled with hydrothermal features. These unusual and rare features are the most epic thing about Lassen.

A hike on the Bumpass Hell Trail will take you through Lassen’s largest hydrothermal area and give some up-close views of the boiling mud pots and superheated turquoise pools. The Sulphur works area is another prime spot to take a boardwalk hike through some volcanic gas vents, or fumaroles. By contrast, the other side of Lassen Volcanic National Park contains waterfall hikes and Manzanita Lake, a popular lake for kayaking, swimming, and camping. This area of the park provides visitors with views of Lassen Peak and lush forest hikes that connect to the Pacific Crest Trail. 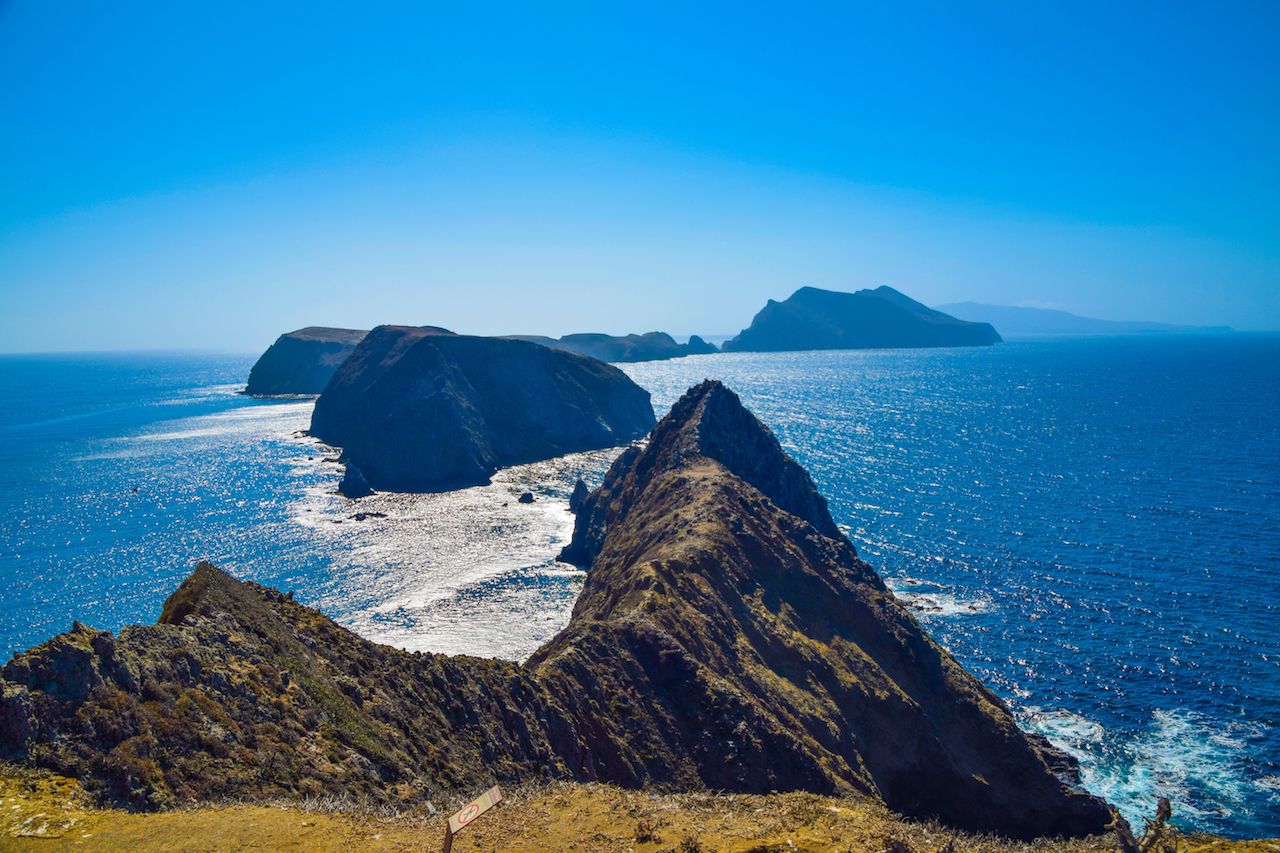 One of the most remote national parks in the US, Channel Islands is comprised of five islands off the coast of Southern California. The only way to reach them is via a plane or ferry departing from Ventura, Oxnard, or Santa Barbara. There are no facilities, electricity, or services on the islands. Even the park’s visitor center is on the mainland. While camping is available, everything brought onto the island must leave with you. This primitive atmosphere is the reason why the Channel Islands are an untouched wonderland. They are known as the Galapagos of North America, where wildlife teems. Naturally, this aspect of the islands is their most remarkable feature.

You can usually spot whales, dolphins, sea lions, seals, and marine birds while exploring the islands. Anacapa, the closest of the islands, is the most popular. It’s next to Santa Cruz, the largest of the islands. Hiking, kayaking, and snorkeling are among the top activities here. Tour companies offer rentals for those interested in kayaking, camping, or diving. And every trail leads you to some spectacular views of the Pacific Ocean and the island’s sea cliffs and caves.

National Parks15 US State Parks That Are Just as Epic as National Parks
Tagged
National Parks Trip Planning California, United States
What did you think of this story?
Meh
Good
Awesome

California Has 280 State Parks. These Are the 10 Most Beautiful To Visit.