It’s tough to think about the Camino de Santiago without imagining pilgrims plodding along the trail toward the afternoon sun, walking sticks in their hands and scallop shells lashed to their backpacks. Pilgrims have been doing this 500-mile trek across parts of France and northern Spain for over 1,000 years, after all. Yet of late, the image of the pilgrim has expanded to include knobby tires, spokes, and helmets. 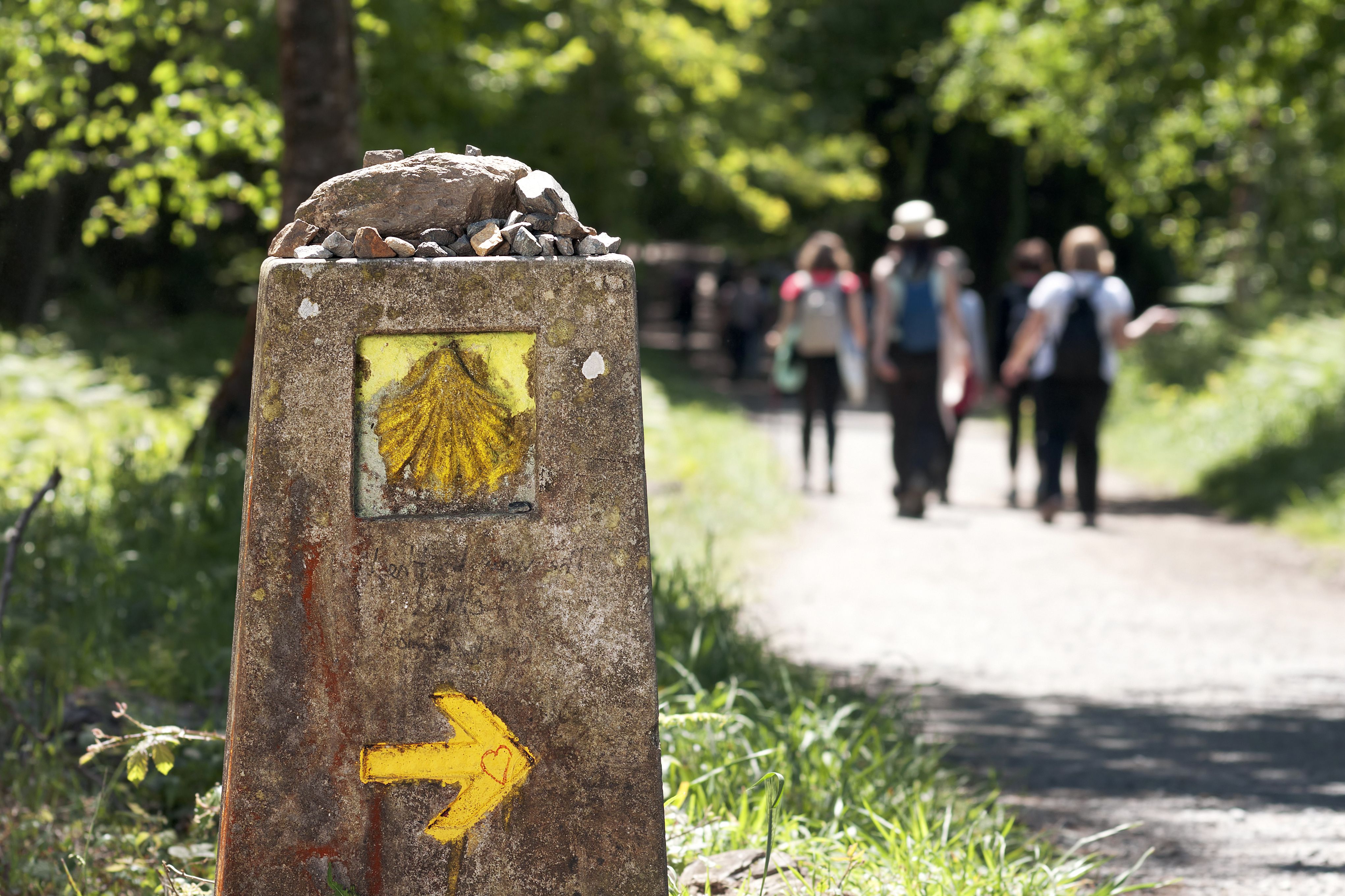 Since the ninth century, the route — with variations originating across Europe — has beckoned believers for its religious significance, and hundreds of thousands of pilgrims per year now converge upon the cathedral in the elegant, stone-hued city of Santiago, which is said to hold the remains of the apostle Saint James. The modern multitudes also list tourism and fitness, as well as cultural and social motivations, for making the pilgrimage.

In 2018, over 320,000 pilgrims arrived in Santiago from their various beginnings, and most of them — over 93 percent — arrived on foot as pilgrims traditionally have done. The trek takes those who undertake it along a mountain range, through forests, and along farmlands, across landscapes that are ever changing.

If you’re interested in traveling across the northern end of the Iberian Peninsula to Santiago de Compostela from origins unknown, how you do it is perhaps just as immediate of a concern as why. Here’s a quick roundup of some of the nuances and challenges you’ll likely face if you choose to pedal the route.

For the sake of practicality when it comes to planning, let’s call the French Way, the Camino Francés, the route for the purpose of this guide. This is the most popular route and begins in the small Pyrenees town of Saint-Jean-Pied-de-Port, France. The details herein can be applied to any route with a little consideration. The journey is a personal one and is said to start wherever you do, but Saint-Jean is as good a place as any to begin. 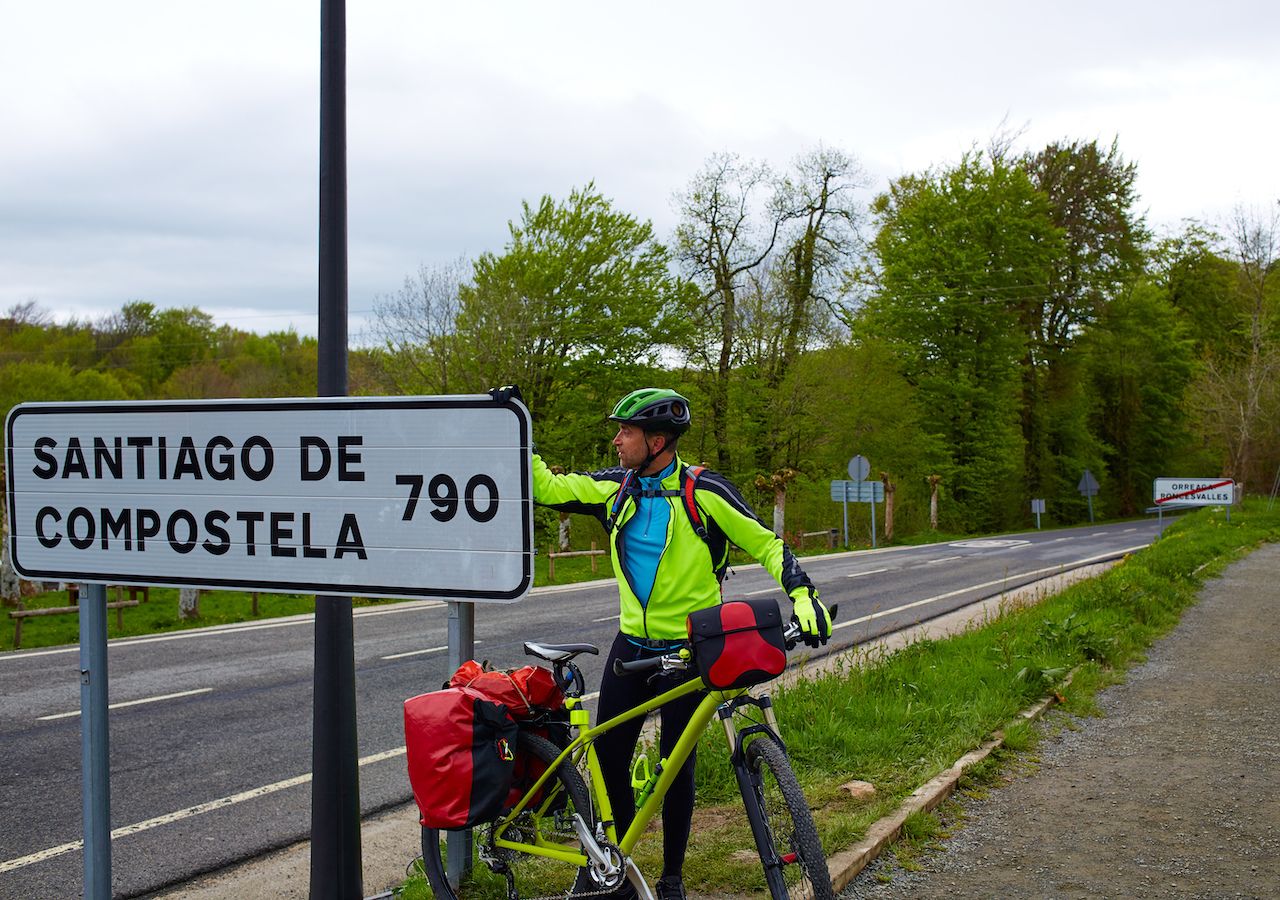 The Camino Francés is about 775 kilometers, just under 500 miles, from Saint-Jean to Santiago. Cover about 55 kilometers per day on your bike, and this pace results in about two weeks on the trail, which can be a much more manageable chunk of time to get away than the month or more it takes to walk the same route. So, there’s that.

Side note: If you’re in an even bigger hurry and cannot do two weeks, another thing to consider when deciding how far to ride and where to begin is your certificate of completion, the Compostela. To receive it, cyclists must have completed at least the final 200 kilometers on their bikes. In addition to the distance requirement, to receive your official Compostela from the Pilgrims Reception Office in Santiago, you’ll be asked if your trip was “for religious or spiritual reasons, or at least an attitude of search.”

Your bike — the most important piece of gear 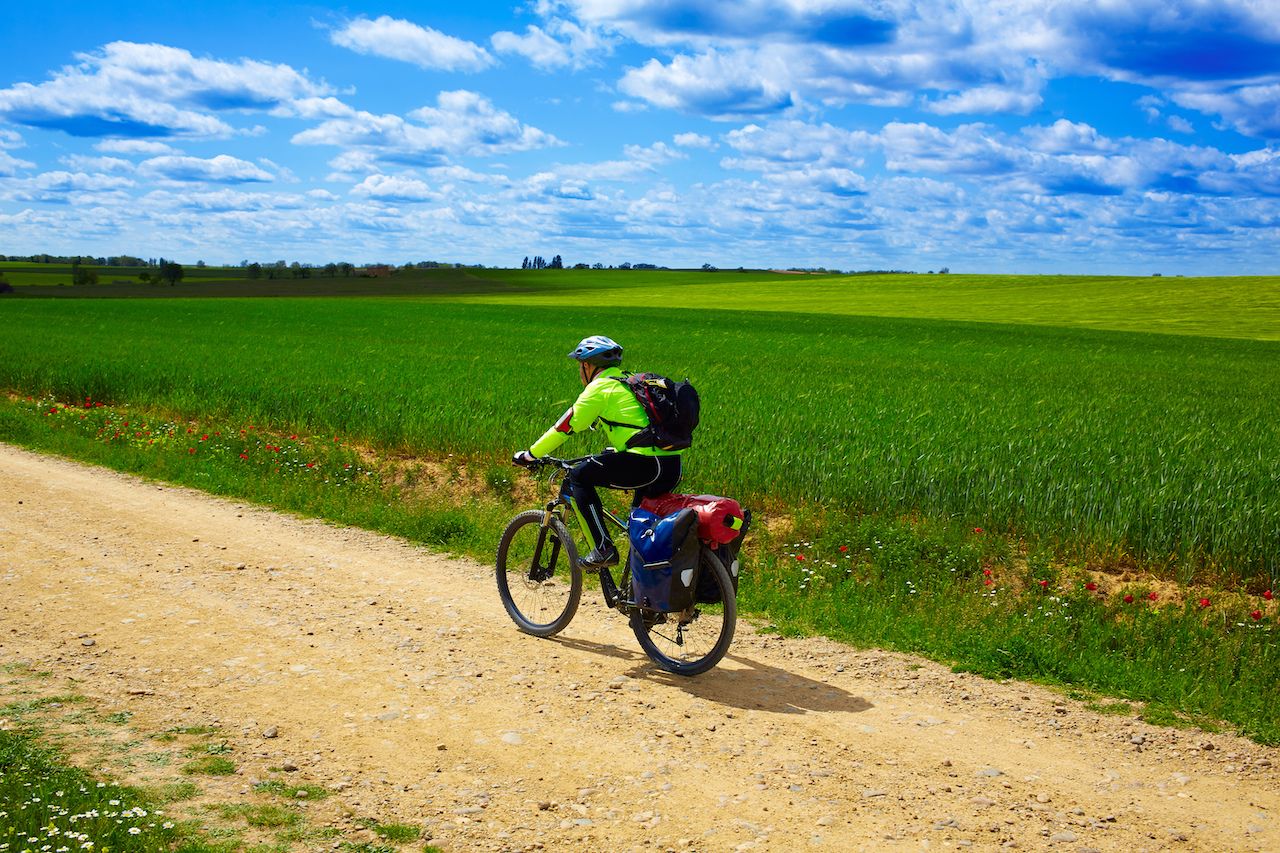 Think touring more than road biking for this trip. While a good portion of the camino follows roads or paved multi-use paths, a lot of the route will take you on dirt tracks, sendas, or old-fashioned trails. At times you’ll be forced off these tracks and trails by their rocky disposition or otherwise generally non-bike-friendly nature, and you’ll have to find your way, for a time, on nearby roads, which may not be waymarked in the same way that the Camino is.

The most efficient cycling setup is a mountain bike equipped for touring, possibly with a front suspension and hefty tires. Your gear options are as variable as you are, but a good plan is to carry your gear on a rear rack with panniers bags and possibly a handlebar bag. Backpacks are going to limit your mobility and aren’t likely to be big enough to allow you to eschew your panniers altogether anyway.

Beyond the bike, you’ll need repair supplies and emergency gear in case something happens en route. Also, basic camping necessities like a bivvy and climbing rope, high-energy foods, and both a rain and warm jacket should be in your panniers. If you choose to carry your camping gear, consider the value of using it only occasionally versus the added weight of carrying it with you the entire way. A tent, sleeping bag, and stove will make you more independent, but it will also slow you down.

You’ll also need to think about getting your bike to and from the trail. For this, you have essentially two choices, with variations available for each. You can pack your bike at home and ship it in a cardboard box or hard-sided case in advance, or bring it as baggage with you as you travel. You can also procure a bike when you get to your starting point, either by renting or buying. Bringing your own bike may seem more complicated, cumbersome, and inconvenient, but you’ll have the peace of mind of knowing your own bike and trusting it, as well as not having the added burden of finding a reputable rental agency or trying to purchase a new or used bike on site. If you do arrive sans bike, Bike Iberia has rental and touring options. 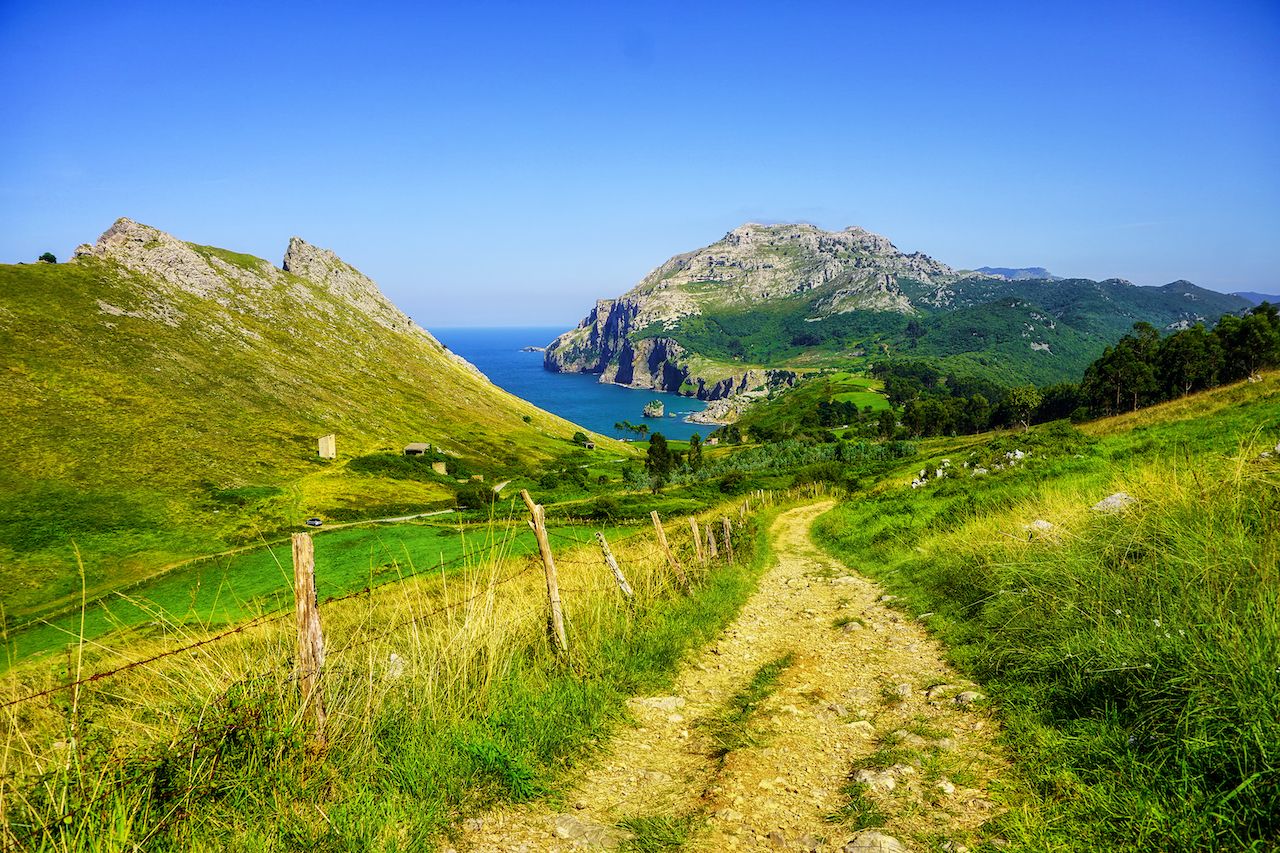 For most of the distance you’ll be on the same route as the walkers, so don’t forget the importance of sharing the trail and being especially courteous when passing. Remember the walkers have been doing this route for centuries, so don’t take it personally if you encounter a section that’s particularly challenging for cyclists, or a group of walkers who are bit displeased by your presence.

On a two-week route, you’ll average over 30 miles per day. This sounds like a lot — and it is — but broken up over the morning and afternoon, it’s a manageable distance. If you were to bike 10 miles per hour on a road in your hometown, you’d cover the entire daily distance in three hours. Don’t despair when you hit a rough patch of trail. Carry a good map or even one of the many popular guidebooks, and remember to ride with your back to the sun in the morning and into it by the afternoon. Most books are tailored toward walkers, but the accommodations, food and drink sections, and route descriptions are all relevant to cyclists as well.

For guidebooks, carry a few (or carry at least one good one, having read others before the trip). Rick Steves has a classic, and for the specific Camino Frances route discussed here, opt for the Village to Village Guide by Anne Dintamen and David Landis.

Lodging along the trail 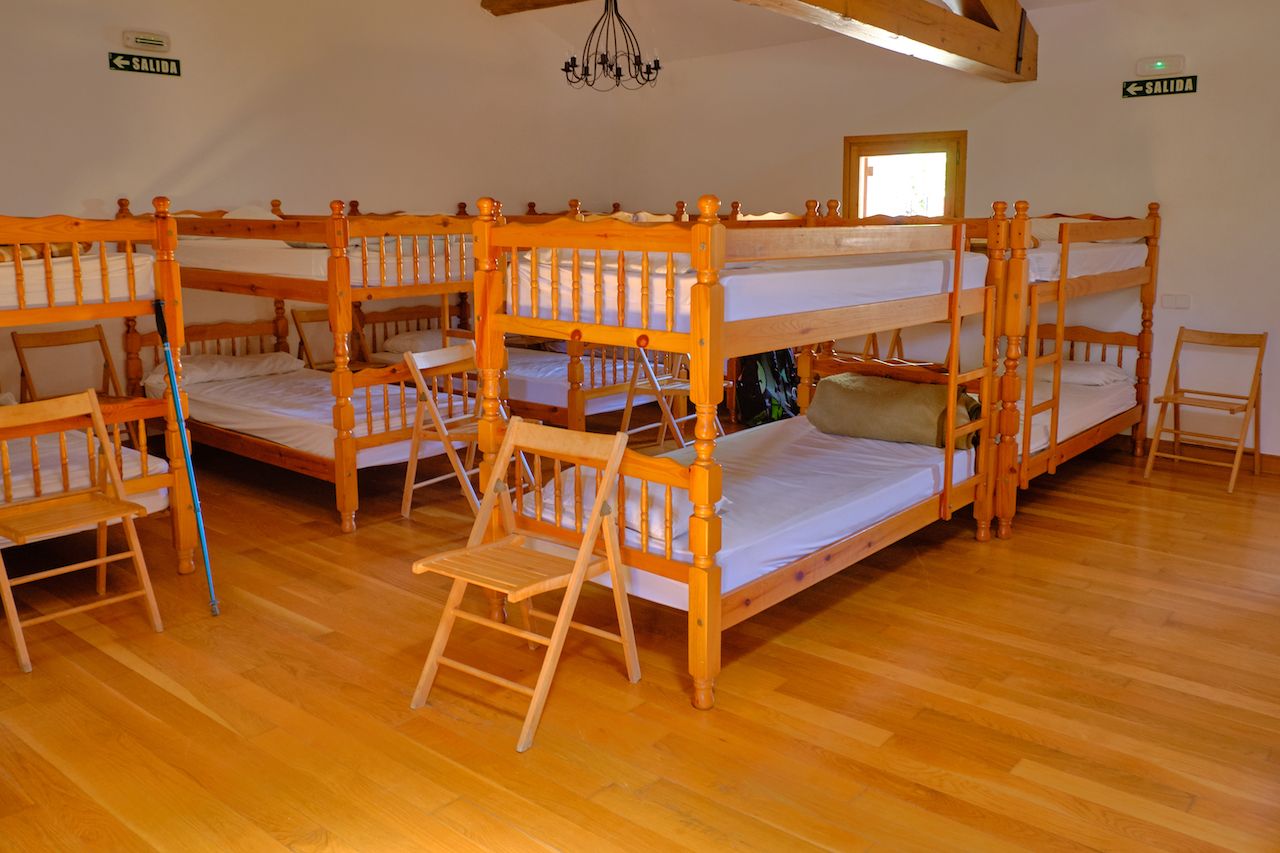 Many hostels, known as albergues, will have places to safely store your bike overnight, but don’t leave your bike unlocked in a communal area even if you’re staying in that hostel. Occasionally you may encounter a hostel that will turn you away because of your early arrival and the fact that you are a cyclist. Don’t be offended. During the busiest times of year, some municipal hostels will fill up early, and cyclists are much more poised to continue searching around town for other accommodations or even pedaling on to another town than are the pilgrims on foot.

The camino bed race, as it has been called, may not be as extreme as it seems, though. Even in peak season you should still be able to find a bunk if you arrive early enough in the day and don’t mind sleeping in top bunks or dormitory-style accommodation. Plus, you can always phone ahead and book a private hostel or hotel before you arrive. This is also a good time to inquire about a place’s bike policies and storage options.

Many places that call themselves “bike-friendly” are referring to little more than the presence of a secure place to store your bike. Don’t assume they’ll be able to help you with repairs or sell gear. Larger cities like Pamplona, Logroño, Burgos, León, and Ponferrada all have traditional bike shops. And many smaller towns have small repair shops, as well.

When route-planning, seek to find a balance between stopping where you think you want to stop and stopping wherever and whenever you feel like it. The route is accustomed to high volumes of travelers, and there is the flexibility to change your plan. For example, a more autonomous experience awaits the cyclist who is self-contained. Camping in municipal parks and inexpensive yet infrequent campsites will save you money and, though camping isn’t nearly as popular as the hostel circuit, can be rewarding in its own independent way.

Riding is a different experience 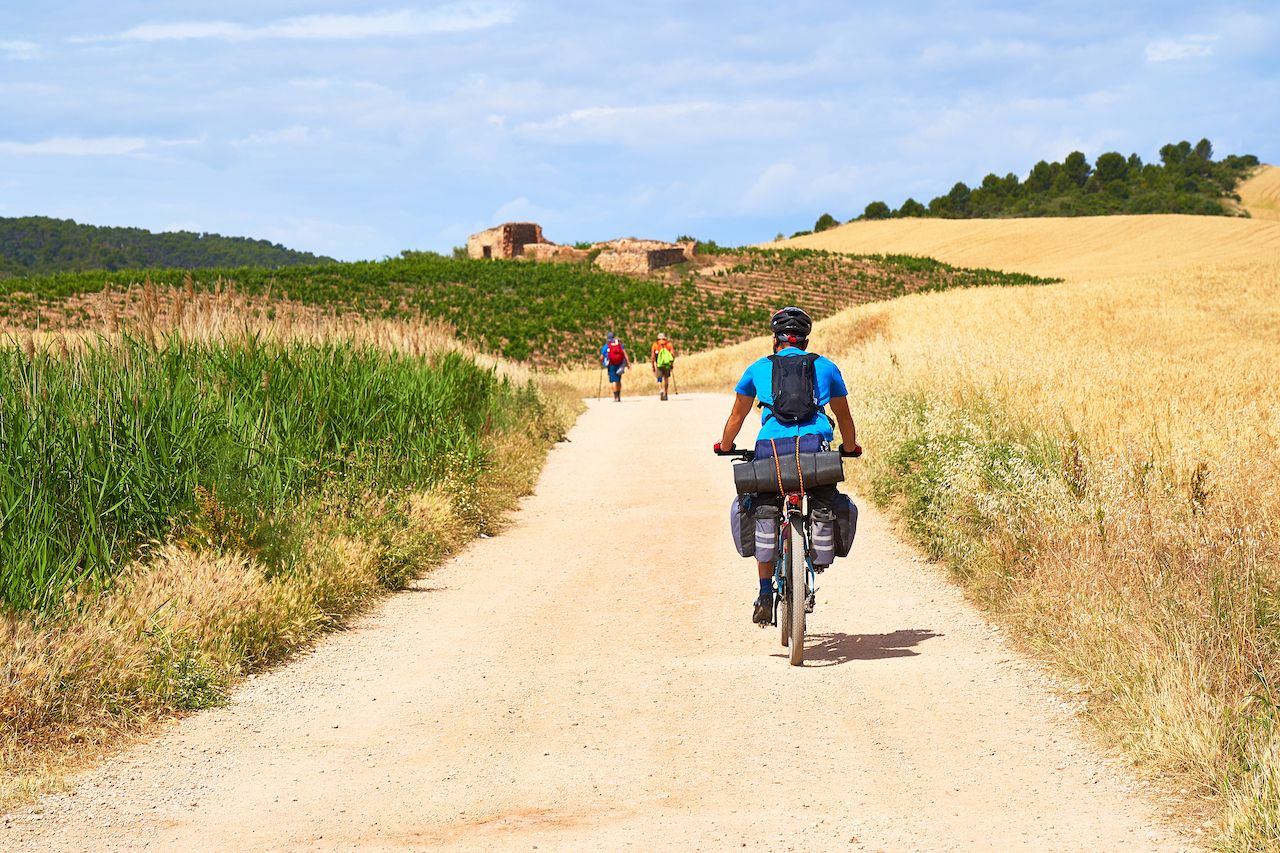 At some point, you’ll need to ask yourself if you want the camaraderie of other pilgrims more than the solitude. Cycling is already a lonelier experience than walking for many. It’s harder to engage in conversation with a fellow traveler when you’re biking than it is when you walk. You’ll also be less likely to develop long-term acquaintances on your way since you’ll be among a smaller pool of travelers covering the same distance daily. In general, walkers often find each other again at the same towns in the afternoons — you, too, will find bikers, but fewer of them.

For some, this might be just the ticket, but for others, the friendship of the Camino is a principal component of the journey. You’ll have to come to terms with the experience you are expecting to have and the one you are willing to have in the moment. Finding a balance between the social and private moments is possible if you’re prepared to be spontaneous and make decisions on the fly. You really will make connections with others along the Camino, even if you don’t have the shared experience of a month-long trek.

Whatever advice you find online or in guidebooks, remember this: It’s your Camino, after all, so go make it yours.

Backpacking15 Things You Need To Know Before Walking the Camino de Santiago
Tagged
Cycling Insider Guides Spain
What did you think of this story?
Meh
Good
Awesome