A piece of LGBTQ history that was thought to be lost forever has been unearthed, and it will now be displayed at San Francisco’s GLBT Historical Society museum.

Ever wondered where the rainbow flag to represent Pride came from? Gilbert Baker arrived in San Francisco in time for the Gay Liberation Movement in 1972 and became known for his sewing creations. In 1978, Baker was asked to create a new symbol to represent the Pride community for the Gay Freedom Day celebration put on by city supervisor Harvey Milk and other local activists. Baker designed and created what we now know as the Pride flag, as well as several companion flags. All were hand-stitched and dyed with the help of friends and volunteers, according to the GLBT Historical Society. While the original 30-feet-high by 60-feet-wide rainbow flag was partially destroyed by mildew from poor storage, a 10-feet-high by 28-feet-wide fragment is on display over 40 years after its creation.

The original rainbow flag has eight colors: pink is for sex, red is for life, orange is for healing, yellow is for the sun, green is for nature, turquoise is for art and magic, blue is for serenity; and purple represents the spirit. The pink and turquoise stripes have since been removed on modern flags. Pink was removed in 1979 because, at the time, the fabric was difficult to find. Turquoise was later removed so the flag would have an even number of stripes. 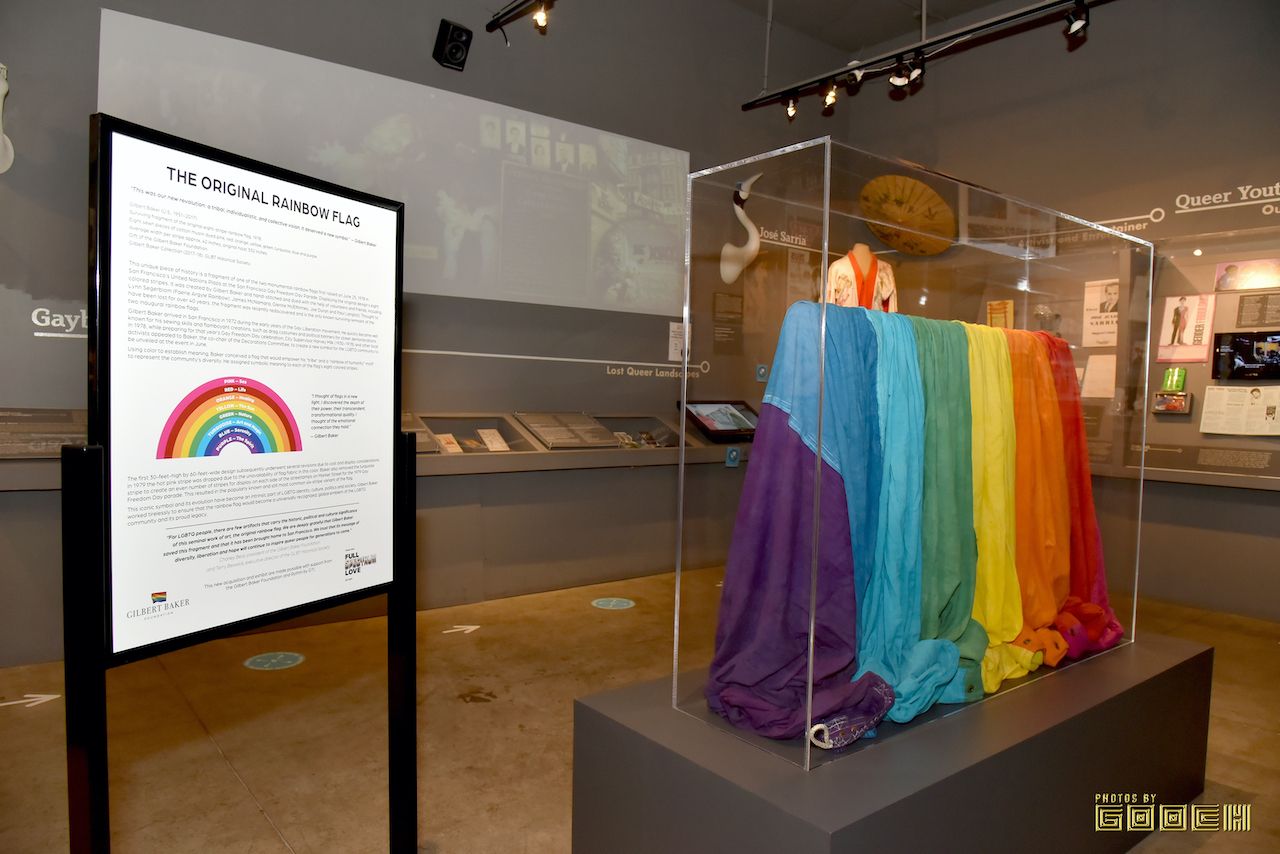 After the original flags were used for the 1979 Gay Freedom Day parade, they went into storage at the San Francisco Gay Community Center. When Baker went to pick them up, he was only able to salvage a portion of the rainbow flag, which he then kept in his possession until he passed in 2017. In 2019, Baker’s sister Ardonna Cook loaned the flags to the Gilbert Baker Foundation for the Stonewall 50 Pride Parade in New York City. Still, no one knew the historical significance of the flags. They were then stored in foundation president Charles Beal’s home until flag expert James Ferrigan brought it up in a chance conversation. The two were finally able to authenticate the flag, according to a press release.

“For LGBTQ people, there are few artifacts that carry the historic, political and cultural significance of this seminal work of art, the original rainbow flag. We are deeply grateful that Gilbert Baker saved this fragment and that it has been brought home to San Francisco. We trust that its message of diversity, liberation and hope will continue to inspire queer people for generations to come,” said Beal, along with Terry Beswick, executive director of the GLBT Historical Society, according to the museum website.

To see the portion of the flag in person, admission is free for all visitors with reservations on the first Saturday of every month. Regular admission is $10. COVID-19 restrictions in place include one-hour caps on visits, with only 10 people allowed in the museum at a time. Walk-ins are only available if the museum is below capacity, so it’s recommended to make reservations online. If you can’t make it to San Francisco, interested parties can also take advantage of an online version of the exhibit.

LGBTQ Travel5 US Cities Where You Can Celebrate Pride 2021 in Person
Tagged
Art + Architecture LGBTQ Travel Museums News
What did you think of this story?
Meh
Good
Awesome