Pride season is only a couple of months away, which usually means type-A trip planners are busy making travel arrangements to celebrate Queer Christmas in style. But planning for June’s festivities during the ongoing health crisis feels like prepping for an M. Night Shyamalan plot twist: we all know it’s going to happen; we’re just not sure when or how it will pan out.

Regardless of what happens in the coming months, events commemorating the 1969 Stonewall Uprising are essential traditions for LGBTQ communities. Pride festivals create visibility for marginalized folx, offer young people a shame-free opportunity to express themselves, and improve the mental health of LGBTQ individuals. But pride isn’t just about partying — it’s also about profit. Chicago and San Francisco regularly attract around one million participants to their celebrations. In 2019, an estimated five million people attended World Pride in NYC. Pride can pump millions of dollars into cities, with LGBTQ businesses often reaping big rewards.

Because of these benefits, organizations across the United States are doing their best to produce Pride events that meet the pandemic’s challenges. For cities that usually celebrate in June, that means postponing the party until it’s safe to gather in person. Washington DC, for example, has its hopes set on October 2021. For other cities, that means protecting locals by sticking to virtual ceremonies. Both Denver and Seattle are planning digital “marches” scheduled for June. Only a handful of major metropoles in the US have organizations currently planning in-person events for Pride month. All of them come with their own sets of safety protocols and ever-changing details.

Hopeful travelers should evaluate their options before making elaborate plans. Pride will be a colorful new experience with partially virtual parties, vaccine passports, and last-minute changes. The trip you plan today may not be the trip you end up taking this summer, but if you’re willing to remain flexible, 2021 may be an exciting time to cash in on cheap travel deals and experience once-in-a-lifetime Pride celebrations. If you’re still uncertain about travel, don’t worry: there are plenty of opportunities to celebrate safely from home, too.

Before making a choice, here are the major cities with in-person Pride celebrations worth considering this year. 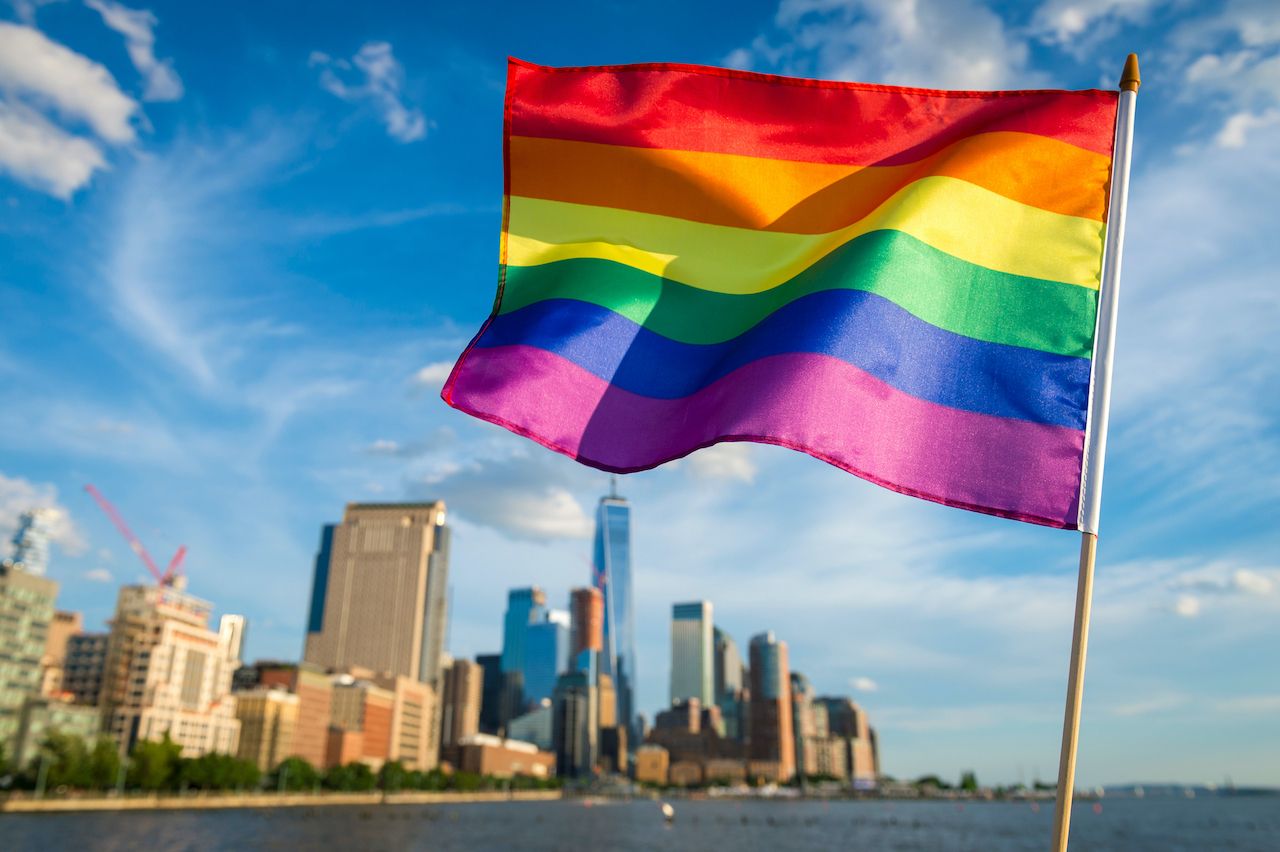 NYC is the most versatile destination in the US for Pride in 2021. A hybrid of in-person and virtual events will occur throughout June, making activities accessible to international communities and safe for locals.

Noteworthy online events include Pride Presents, an annual LGBTQ film festival that starts streaming on June 18. A series of speakers will gather for the Human Rights Conference from June 21-23, taking a sociopolitical look at international LGBTQ rights. The Rally, which lifts the voices from marginalized LGBTQ communities to inspire education and activism, will kick off the official Pride weekend on Friday, June 25. The June 27 Pride March will likely take place online as well.

The city’s current list of in-person events will allow LGBTQ folx and allies to celebrate in healthy, responsible ways. Visitors should remember that these events are subject to the ever-changing landscape of COVID regulations and may be canceled, postponed, or altered between now and June.

Brooklyn Pride and Front Runners New York have joined forces to heat things up on June 12 with a 5K run through Prospect Park. Pride Island, a concert and festival usually held on a Hudson River pier, is set for Sunday, June 27. While no definitive plans have been announced for Pride Island, the possibility of a ticketed, limited-capacity party is likely. New York’s Excelsior Pass — a free app allowing New Yorkers to share their COVID-19-related health data — was recently released to give businesses and performance venues a fast track to reopening. This pass, or one like it, may be needed to gain entry to the event.

NYC Pride’s most innovative developing COVID-era idea is to pair local businesses with artists and create Pride march pop-ups. An interactive map will lead people to participating locations, giving both businesses and creatives a much-needed boost following this past year’s many trials. Companies interested in participating can sign up here.

For the antidote to corporate, mainstream Pride celebrations, consider attending the in-person Queer Liberation March hosted by the Reclaim Pride Coalition (RPC), scheduled for June 27. Unlike the city-sponsored events, RPC’s march honors the gritty origins of Pride. Walking may feel like a party, but at its heart, it’s still a protest. 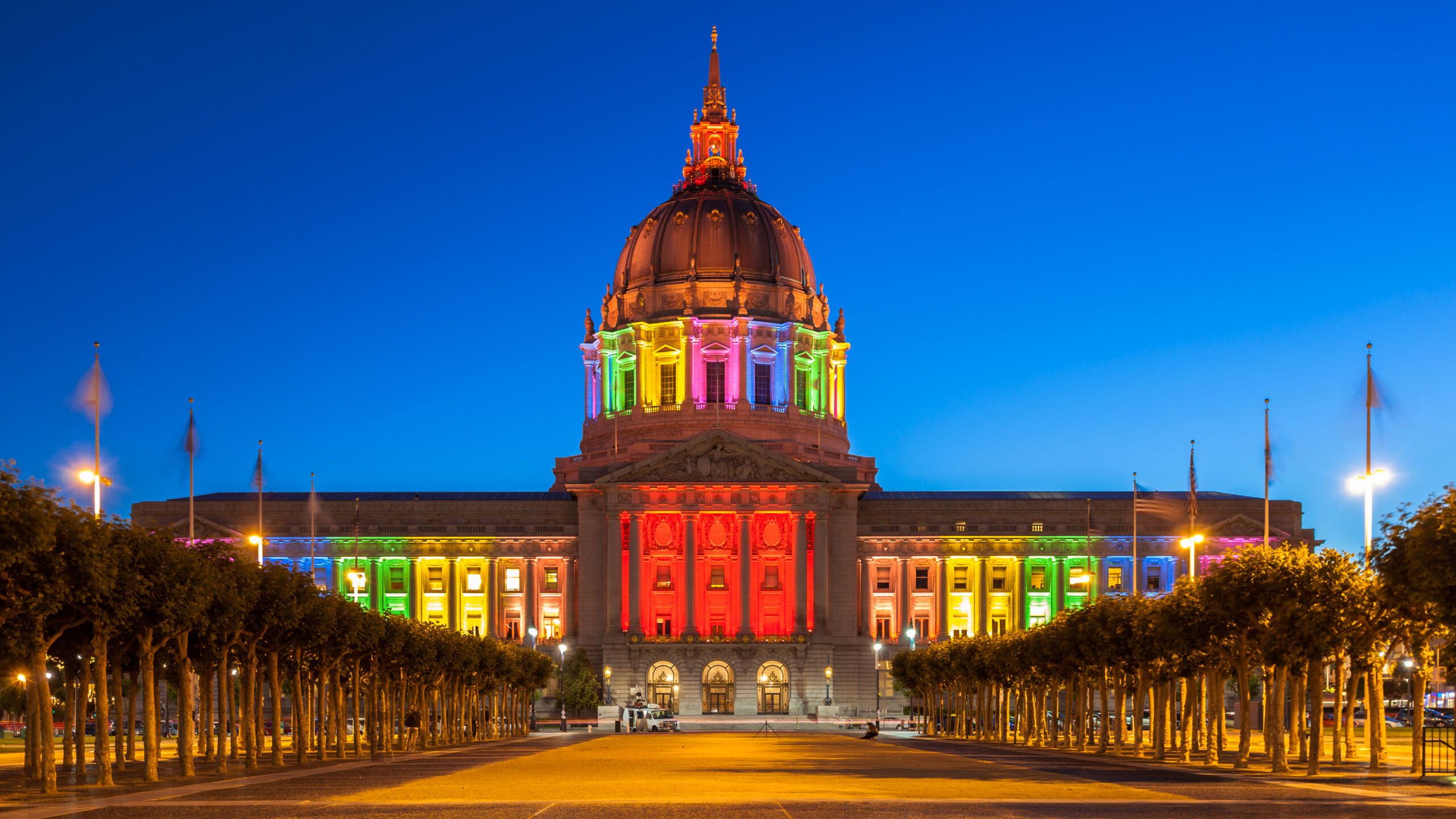 The Golden Gate City will serve a limited menu of events for Pride that follow current safety protocols.

Frameline and the San Francisco Giants will team up to present Pride Movie Night at Oracle Park — a ticketed event that serves as part of the San Francisco LGBTQ+ film festival. On the eve of Juneteenth (Friday, June 18), the African American Art and Culture Complex will host the Black Liberation Event — a rally celebrating Black LGBTQ culture. Other local celebrations, including the annual Trans March and Dyke March, have yet to announce plans.

The most exciting event planned for June will be Pride Expo — an event produced in place of the boisterous annual celebration at Civic Center Plaza. The queer-oriented expo will act as a resource fair, giving LGBTQ businesses and organizations a place to connect with customers and engage with community members in a safe space. Prospective participants should check the SF Pride website for more information. 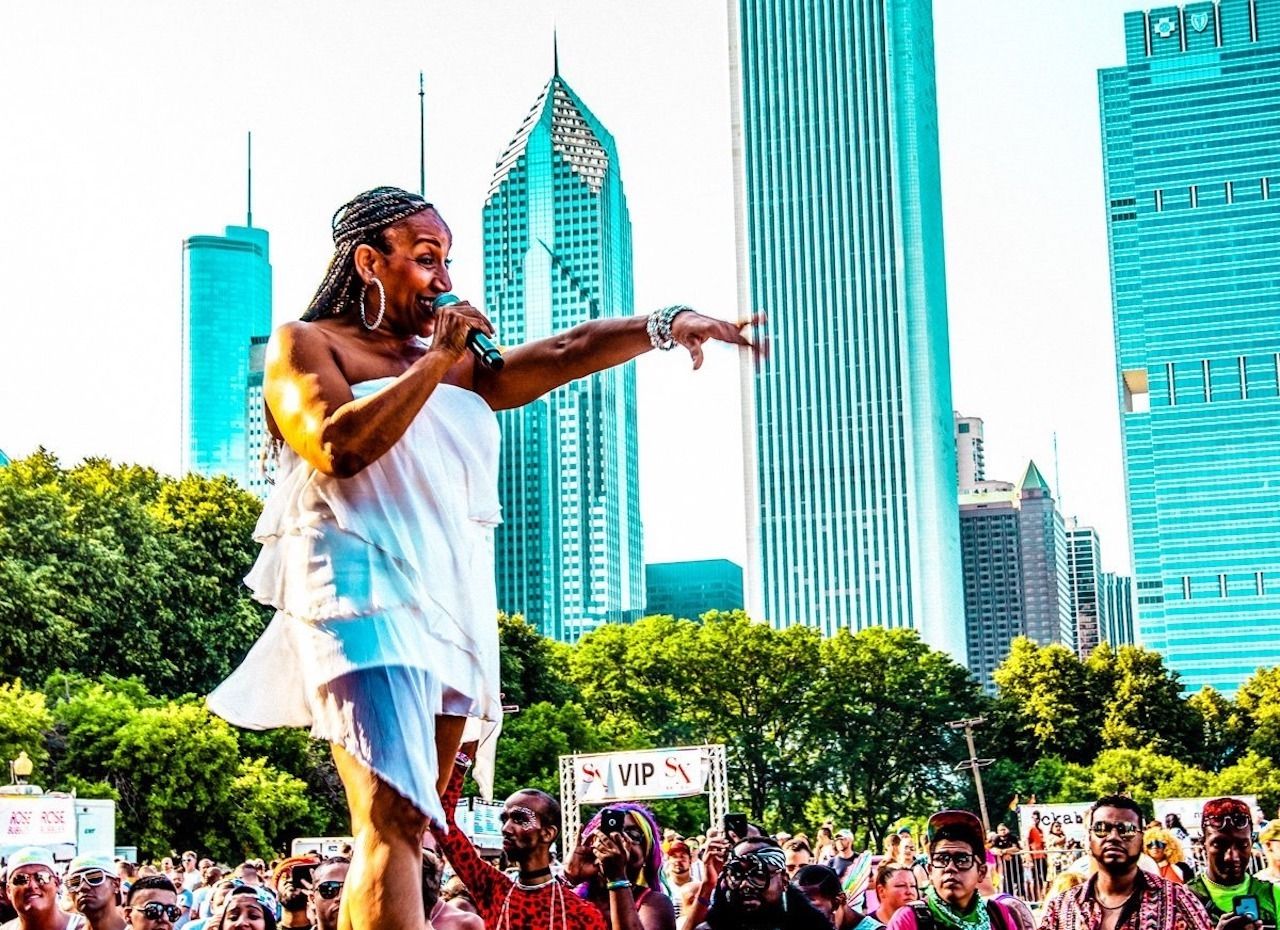 Photo: Pride in the Park

While nothing official has been announced for Chicago’s annual Pride celebration, parade organizer Tim Frye recently told Block Club Chicago> that he’s “cautiously optimistic” about an in-person event, even if it happens later than usual this year.

Meanwhile, Pride in the Park (a two-day ticketed festival held at the Petrillo Bandshell in downtown Chicago) is poised to announce in-person gatherings on June 26 and 27. The festival — which usually features food, drinks, and a star-studded line-up of performers — has outlined COVID-19 safety protocols on its website in preparation for the event. Organizers will post final entry requirements two weeks before the gathering, but ticket holders can expect to show proof of vaccination or a negative COVID test for entry. Pride in the Park is partnering with Health Pass by CLEAR — a free mobile app that stores health-related requirements — to provide attendees friction-free entrance to the festival. Attendees should feel safe knowing that the event is taking safety protocols seriously: anyone not following guidelines will be asked to leave without a refund. 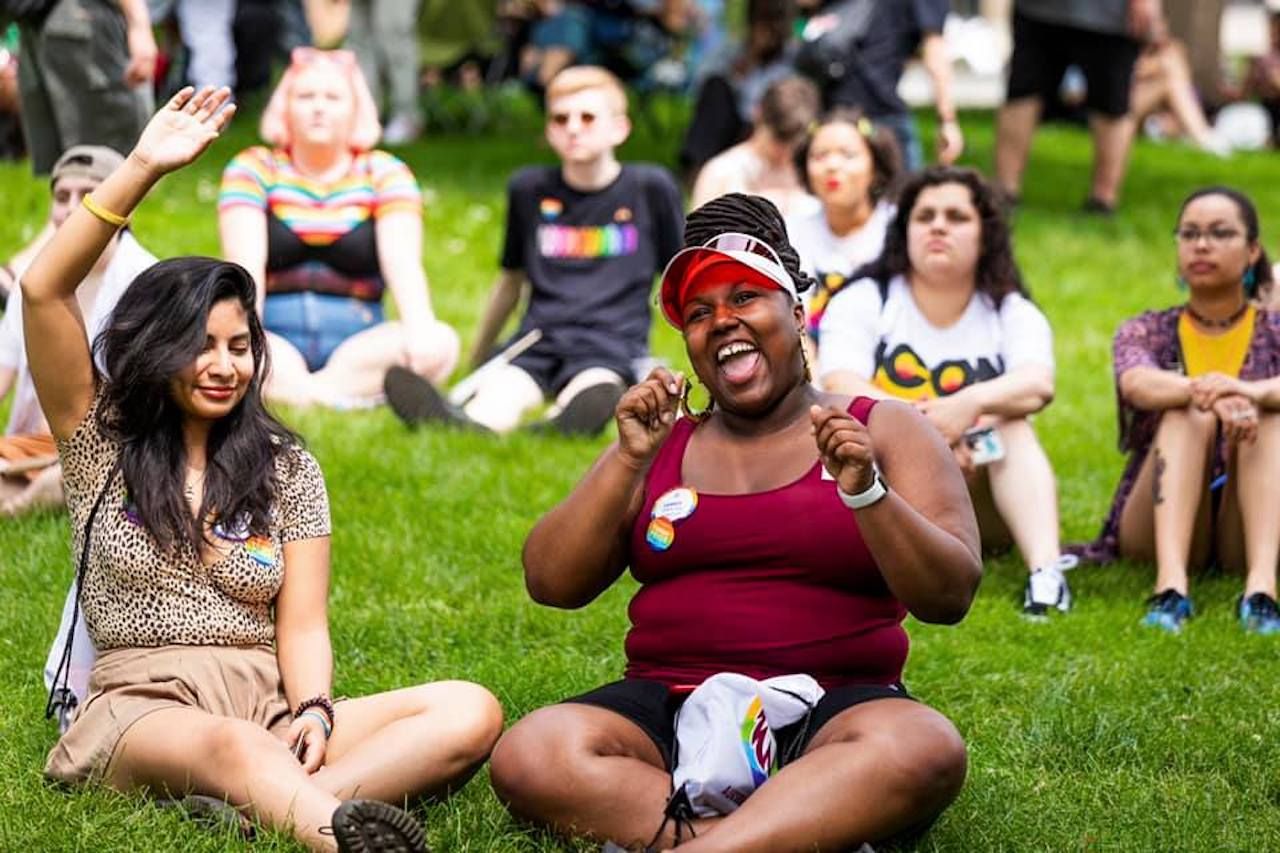 Minneapolis and neighboring Saint Paul couple up every year to throw one of the Midwest’s biggest LGBTQ celebrations averaging around 400,000 participants. This year will undoubtedly look different, but the dynamic duo isn’t throwing out their queer baby with the bathwater — they’re just doing things a little bit differently.

Event organizers are currently considering a “drive-through reverse parade” so participants can remain physically distanced for Pride’s biggest annual event. A Grand Marshal Gala with both in-person and virtual components is also in the works.

Como Park, located in Saint Paul, plans to host Family Fun Day on June 20; households can bring picnics and celebrate outside. The Rainbow Run 5K will give participants two options: run with the crowd at 9:00 AM on Sunday, June 27, or choose your own time and location to complete the race during the week prior.

As of early April, Pride’s culminating festival – usually held at Loring Park in Minneapolis — has no definitive plan. Organizers are working to create a safe, limited-capacity event for June and expect to announce their intentions later this month. 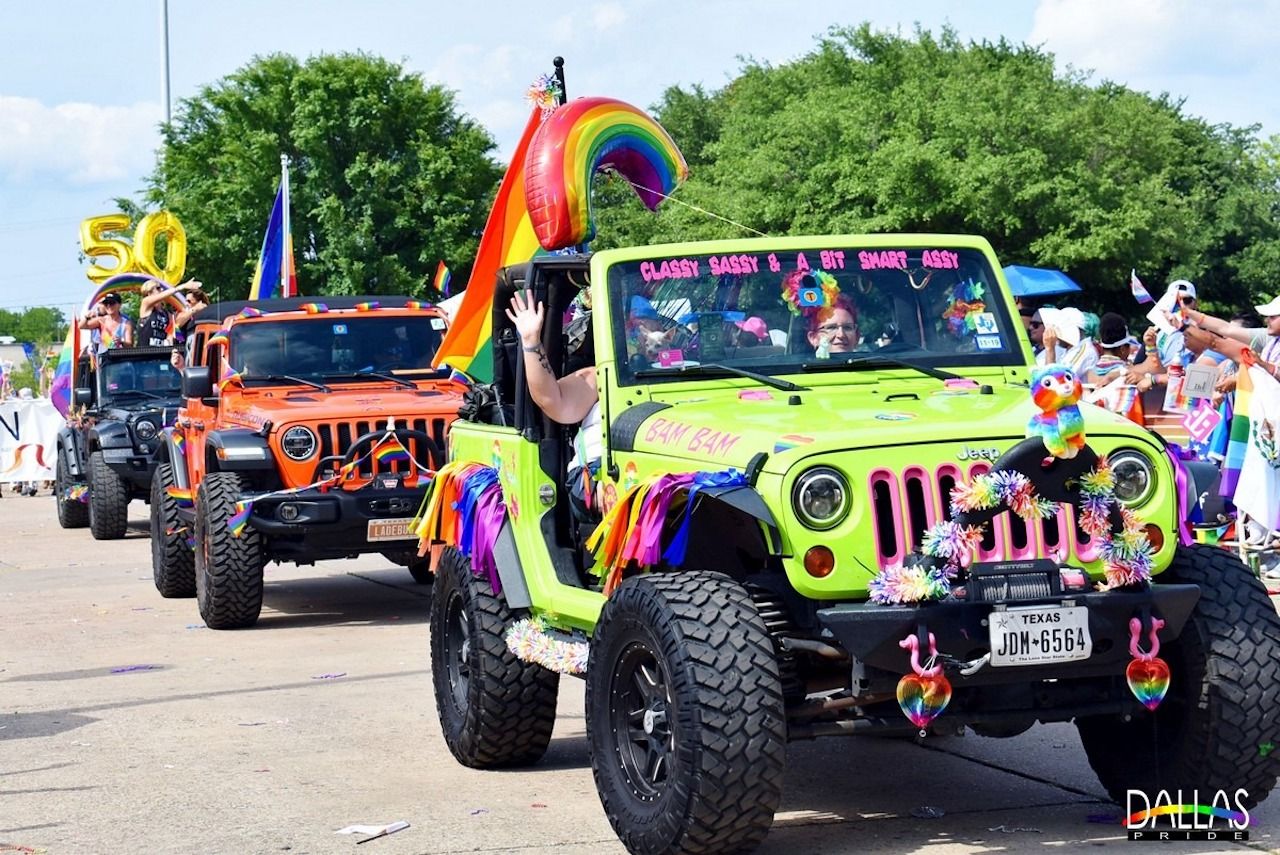 In early June, Dallas Pride will be one of the country’s first major LGBTQ celebrations to bring crowds together again. “Pride is such a meaningful and galvanizing event for our region,” said Jaron Turnbow, the organization’s executive director, in a recent statement, “and it is wonderful that we are now in a place where we can plan for some in-person activities.”

The festival will take place outdoors at Dallas’s Fair Park on June 4 and 5. Guests can expect performances from local celebrities like Kennedy Davenport (a pageant queen who danced her way to the top of RuPaul’s Drag Race) and Sister Helen Holy (a drag comedian from the “First Southern Fried Self-Satisfied Baptist Church”). Those feeling cautious about large groups don’t need to join the crowd to join the fun: the event will stream online, giving everyone a chance to participate safely from wherever they choose.