June 28, 2019, marks the 50th anniversary of the Stonewall uprising (alternately called the Stonewall riots or rebellion), which was a turning point in the LGBTQ+ rights movement in the United States. While people had long been working for equality for LGBTQ+ people in the US — including the “homophile movement” in the 1950s and ‘60s and other pro-LGBTQ+ demonstrations — the riots at the Stonewall Inn generated national media coverage, the formation of gay and trans rights groups, and massive forward momentum for LGBTQ+ activists and the greater community.

This Pride month, cities around the globe are commemorating Stonewall’s 50th anniversary — and, in particular, New York City will be chock full of marches, exhibitions, performances, and other activities that shine a light on the events of the summer of 1969 and the growth of the LGBTQ+ rights movement. Here’s a quick rundown of Stonewall’s importance and the exciting events happening in NYC this month.

What is the Stonewall uprising?

When police raided the Stonewall Inn, a gay bar in Greenwich Village, late in the night on June 28, 1969, the patrons had had enough. They were homeless LGBTQ+ teens, trans women of color, drag queens, gay men, lesbians, and LGBTQ+ folks of all different races and backgrounds, many of whom had come from across the US looking for a place where they could be themselves. In the 1960s, New York City — and Greenwich Village, in particular — had a reputation for being that place.

The problem was that homosexuality and “cross-dressing” were still criminalized in New York and throughout the US. The presence of one gay man in a bar licensed by the New York State Liquor Authority could result in the bar being shut down for “disorderly conduct.” An 1845 law made it a crime to “masquerade” — to enforce this, police required that each person wear three articles of clothing of the appropriate gender at all times, effectively outlawing drag queens, drag kings, and many trans folks. Even slow-dancing with someone of the same gender could result in arrest.

To enforce these laws, police in New York City regularly conducted raids on gay bars and other locations where LGBTQ+ people gathered, leading to arrests, harassment, and often violence at the hands of police.

In the summer of 1969, in an effort to “clean up the streets,” those raids increased in frequency and brutality. By the time police arrived around 2:00 AM on Saturday, June 28, the Stonewall Inn had already been raided earlier that week, and other gay bars had been raided or shut down in the weeks prior.

It was a weekend night, and the bar was packed with a mix of people, many of whom were barred from other gay bars, including trans women, drag queens, and street kids. The bar’s lights were flipped on, and as the police asked for the patrons’ IDs, a crowd started to form outside the bar.

For some reason, while many of those folks had been arrested multiple times for being LGBTQ+, this time, they resisted. A drag queen was shoved in the back of the police truck and kicked back at the officer with her high heels. A butch lesbian tried to get away from the police, was beaten, and fought back. “Why don’t you guys do something?” she yelled. Historical accounts often credit the biracial lesbian and drag king Stormé DeLaverie with this line.

Yet, it wasn’t simply one person’s words that started the Stonewall riots. Many people who were at the riots have described it as a feeling that bubbled out of the community — the community finally coming together to stand up for itself. And in the midst of this fighting back, a riot began.

The police barricaded themselves inside of the Stonewall Inn, and an estimated 500 people gathered outside. Some tore up a parking meter and used it as a battering ram at the Stonewall’s door. Others threw bricks and bottles and, eventually, Molotov cocktails, chanting things like, “Gay power!” and “We want freedom!”

More police arrived and the riots grew, and the protesters weren’t backing down. And even though the Stonewall Inn was shut down, and the streets were cleared by 3:00 or 4:00 AM, the next day, the bar reopened — and the riots continued on Sunday, Monday, and by some accounts for up to six days, with reportedly up to 2,000 people protesting on a given day.

In the wake of the riots, several community members and activists formed the Gay Liberation Front (GLF) to carry forward the momentum of those nights. Trans activists and Stonewall protesters Sylvia Rivera and Marsha P. Johnson founded Street Transvestite Action Revolutionaries (STAR) and created the first shelter in New York City for LGBTQ+ youth. Within a few months of the Stonewall riots, LGBTQ+ activists called for a march to be held in New York City in June 1970 to commemorate the protests. Activists in other cities decided to march as well, and in June 1970, these marches were held New York City, Chicago, Los Angeles, and San Francisco — growing into the pride marches and parades we know today. 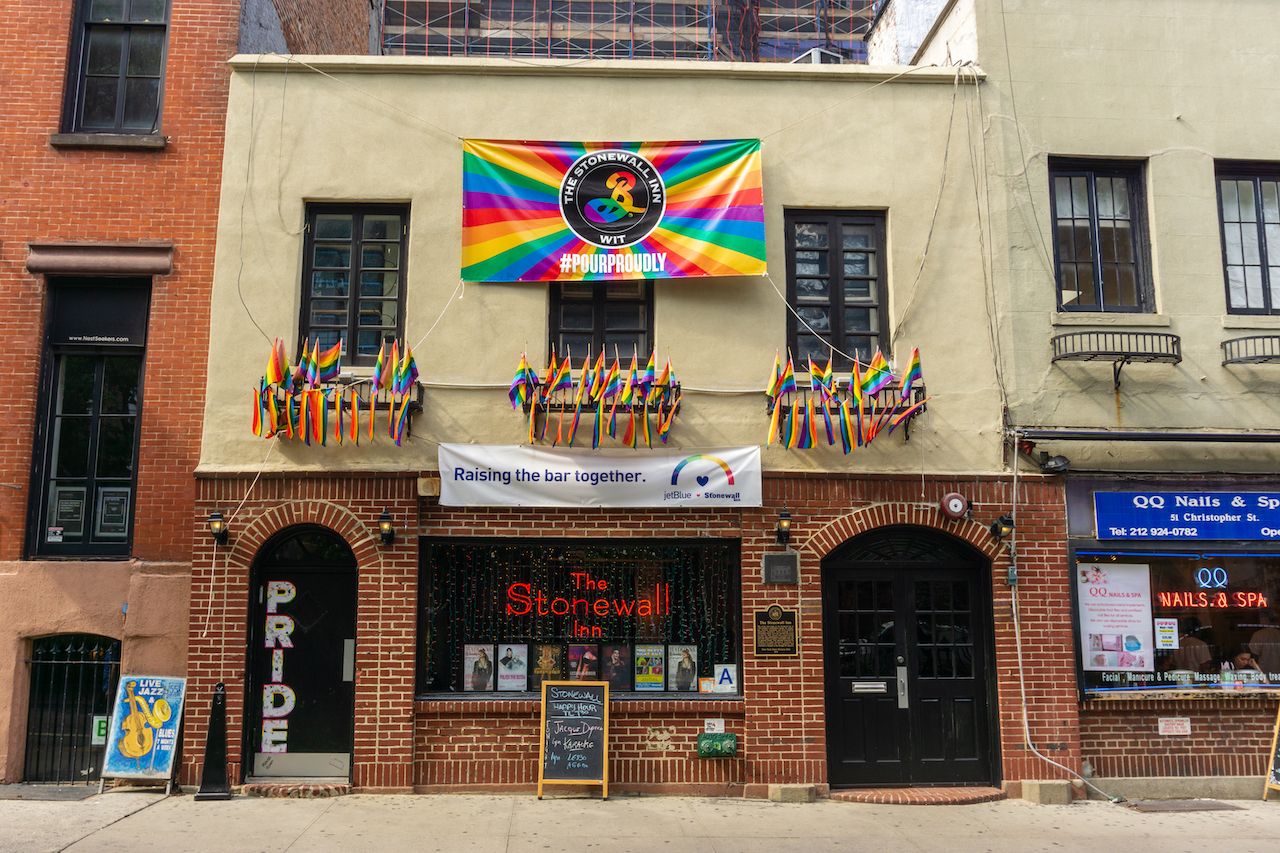 How and where to celebrate Stonewall in New York City

In honor of the Stonewall Uprising’s 50th anniversary, New York City will play host to an array of activities, rallies, and marches. This year, WorldPride, an international organization that seeks to rally LGBTQIA communities on a global level, will be in the US for the first time as they partner with New York City Pride to host more than 50 events throughout June. In addition, the arts and cultural community is sponsoring exhibitions throughout all five boroughs of New York City.

Here are just a few of things to see and do during this year’s NYC Pride month as we celebrate Stonewall’s 50th anniversary:

The anniversary of Stonewall has inspired a range of artistic responses throughout the city. Highlights include the New York Historical Society’s exhibition “Stonewall 50,” Brooklyn Museum’s “Nobody Promised You Tomorrow: Art 50 Years After Stonewall” and “Love & Resistance, Stonewall 50” at the New York Public Library, among other arts-related events.

If films, plays, and performances are more your style, consider checking out OutCinema (June 17-19), the Criminal Queerness Festival (June 13-July 6), or any of the dozens of performances scheduled this Pride season.

Several organizations are offering Stonewall and LGBTQ+ history tours during Pride month. Tour & Toast for Stonewall (June 24 and 27, $50) is a 1.5-hour tour of Greenwich Village that will delve into Stonewall’s history and New Yorkers’ efforts to achieve LGBTQ+ rights. Beyond Stonewall: LGBT History Tour (June 22 and 29, $29) explores LGBTQ+ history on the streets of Manhattan, from the 1960s to the present day. And Pride Tours NYC’s Walking Tour (June 27, $30) does a deep dive into the story of Stonewall.

Fifty years after the Stonewall Uprising, activists, organizers, politicians, the LGBTQ+ community, and our allies will be coming together to advocate for LGBTQ+ rights in the US and beyond. On June 28, 6:00-9:00 PM, members and supporters of the LGBTQ+ community will rally at Christopher Street and Waverly Place, the original site of the Stonewall Rebellion, to take a stand for human rights, social justice, and liberation.

The Queer Liberation March and Rally is “a people’s political march” that will be held in honor of the Stonewall Rebellion on June 30. Boasting “no corporate floats, and no police,” this march seeks to highlight the ongoing struggles faced by LGBTQ+ communities — especially those who are most marginalized. The march kicks off at 7th Avenue south of Christopher Street at 9:30 AM, and folks are welcome to join in throughout the march, which will end with a rally in Central Park.

On June 30, NYC Pride and WorldPride are teaming up for this year’s official NYC Pride March. The parade steps off at noon at Madison Square Park, and the route will pass The Stonewall Inn, The Stonewall Monument, and the NYC AIDS Memorial. In 2018, there were more than 550 groups who participated in the march, and this year’s march will likely surpass those numbers. So come ready to celebrate with pride!

Looking for something more? From local Pride festivals and rallies in NYC’s five boroughs to poetry readings, WorldPride and NYC & Company’s events lists can keep your heart and calendar filled all summer long.

For more info on Stonewall, check out these resources:

LGBTQ TravelThese Landmarks Around the World Are Celebrating Pride Month in Style
Tagged
LGBTQ Travel New York, NY, United States
What did you think of this story?
Meh
Good
Awesome

The 24 Top-Rated Drag Brunches in the United States