Since the inception of the pride parade, no year has ever mattered quite as much as 2019. This is because exactly 50 years ago, the Stonewall Riots, one of the most pivotal events in LGBTQ culture, occurred in New York City. So, this year, to commemorate this culturally and historically important moment, every pride parade across the nation is promising to provide entertainment that is bigger and better than ever.

In order to take advantage of this historical moment, we’ve gathered a list of the very best pride parades from around the country — from the shores of San Francisco to the heart of the Midwest in Milwaukee. Whether you’re looking for star-studded celebrations (hello, Los Angeles) or you’re just there for the shirtless men (hello, Miami Beach), these are the most magical pride parades in the United States. 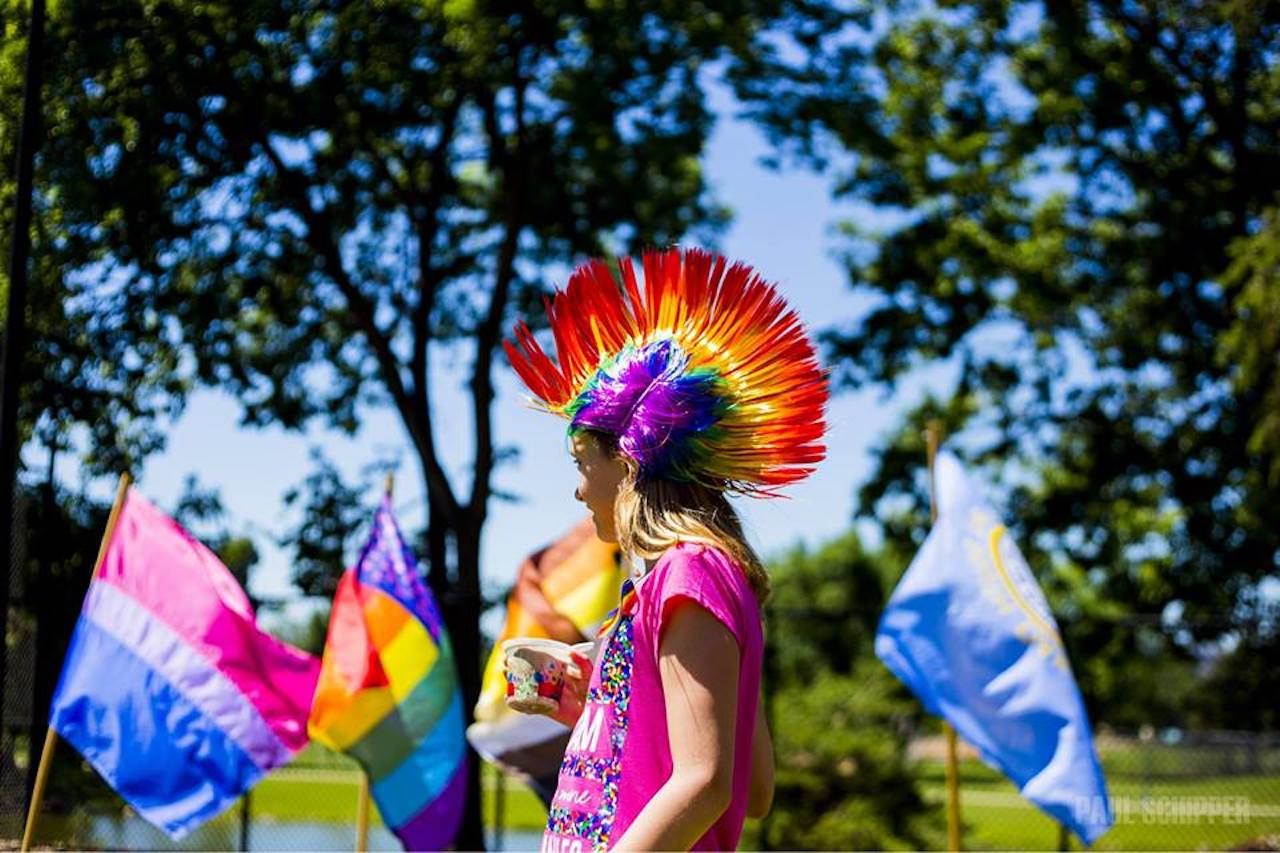 Though you may only head to South Dakota for its various national parks, perhaps it’s time to pay a visit to the state for something else — its pride parade. According to The Advocate, the attendance of this pride festival has grown from only hundreds of participants to thousands in a mere few years — suggesting, in fact, that Sioux Falls has something incredible to contribute to the LGBTQ community. On Saturday, June 15, members of the LGBTQ community and their allies can look forward to a parade and festival full of unique vendors, food, and activities at the Sioux Falls Pride.

For those members of the LGBTQ community living near Milwaukee, Wisconsin, Pridefest Milwaukee proves time and again to be one of the best pride events in the country, with a plethora of entertainers and events taking place each year. From June 6 to the 9th, visitors to PrideFest Milwaukee can expect to see a performance by Revamped Dance Company, a meet and greet with singer Jojo, and many other memorable pride-related events. 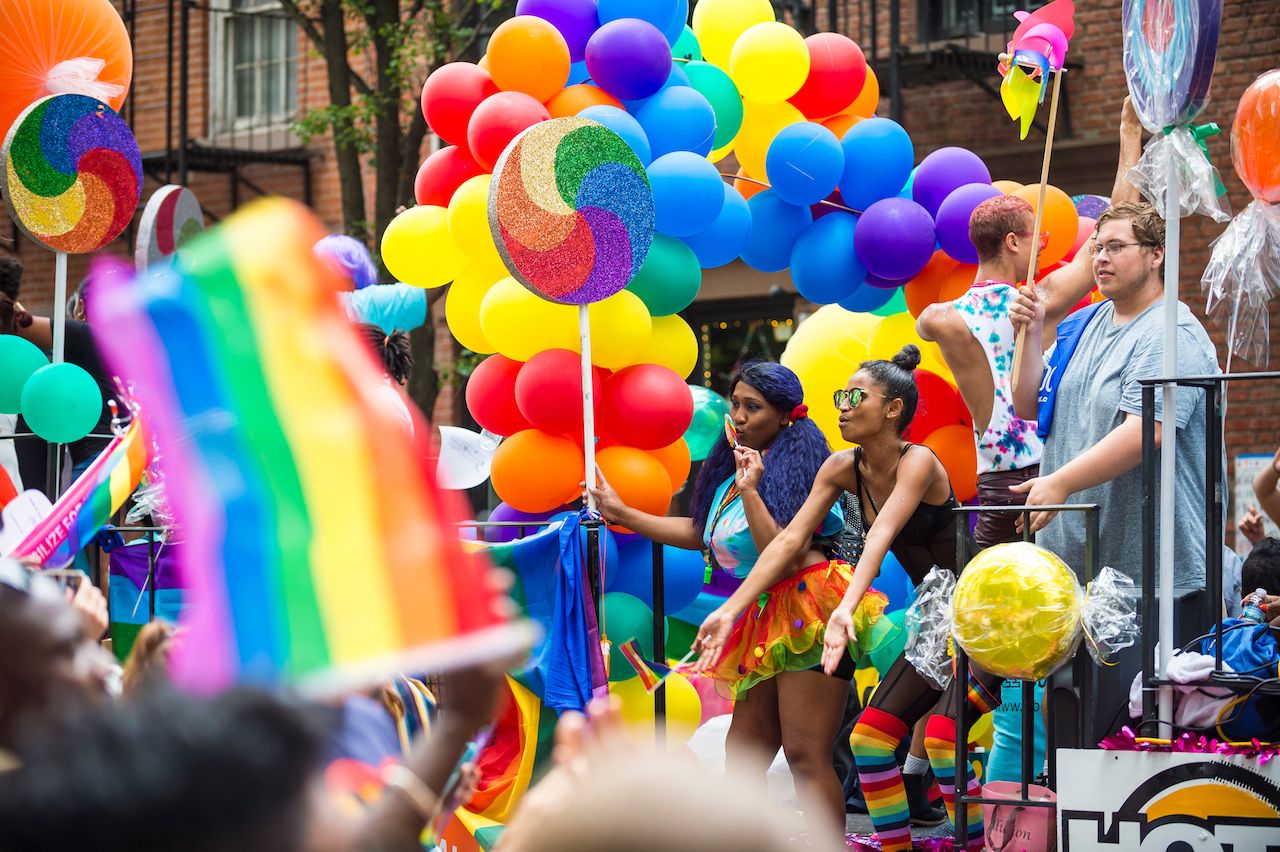 As you can imagine, New York City Pride is one of the largest in the world, welcoming hundreds of thousands of visitors and participants each year. For those who are especially interested in the LGBTQ movement in America, the New York City Pride Parade ventures right past the Stonewall Inn on Christopher Street, where the famous Stonewall Riots took place in 1969. Not only that, but the history of this event is felt throughout the events of Pride Month in June; along with the parade, the volunteers at the nonprofit Heritage of Pride have been organizing the Rally, PrideFest, and Pride Island since 1984. This year, the Pride March will take place on June 30, and visitors can look forward to capturing a glimpse of event host Whoopi Goldberg and performances by Cyndi Lauper and Ciara.

Taking place between July 12 and 14, San Diego LGBT Pride is one of the best events of its kind in the state of California. While at San Diego Pride, it’s essential that visitors stop by the She Fest, a female-centered event at the festival that curates relationships and experiences with women. Apart from that, expect to have a truly magical time at other festival events like the Pride 5K race, where rainbow gear and tutus are almost a required uniform. 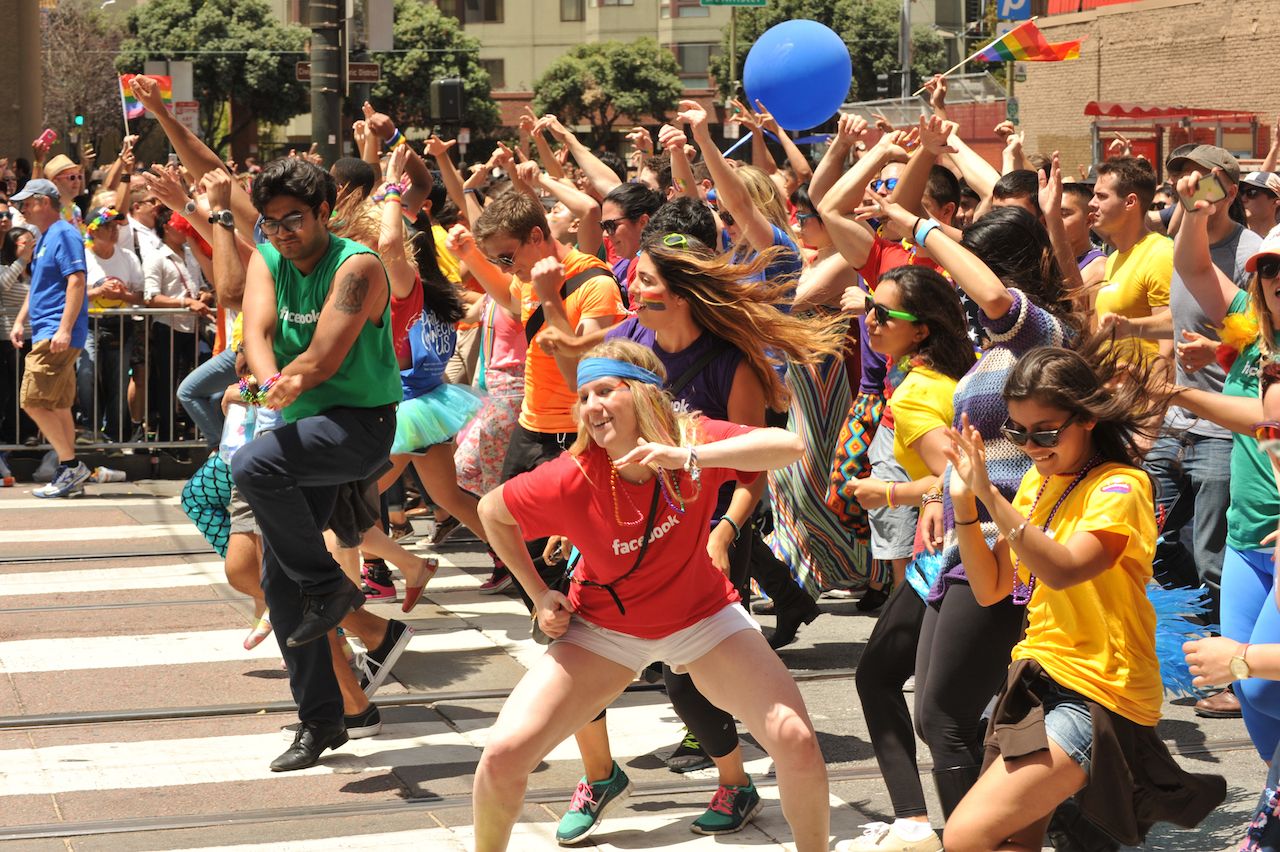 Nearly rivaling NYC Pride in size, San Francisco Pride has risen through the ranks of pride events in the United States to become a favorite among the LGBTQ community. San Francisco has especially been a favorite over the years for those members of the LGBTQ community who enjoy live music. So far, the performers hitting the main stage at San Francisco Pride during the weekend of June 29-30 are Pabllo Vittar, Brazil’s most famous drag queen, and Amara La Negra, an international LGBTQ superstar.

Prior to 1996, Brooklynites often had to venture into Manhattan to take part in a pride festival. Now, Brooklyn’s Pride festival nearly rivals that of its Manhattan counterpart, welcoming thousands of visitors every single year. On June 8, Brooklynites and outsiders alike are welcome to attend the Pride 5K, the Twilight Parade, the Multi-Cultural Festival, and a plethora of live performances by members of the LGBTQ community and their allies at Brooklyn Pride. 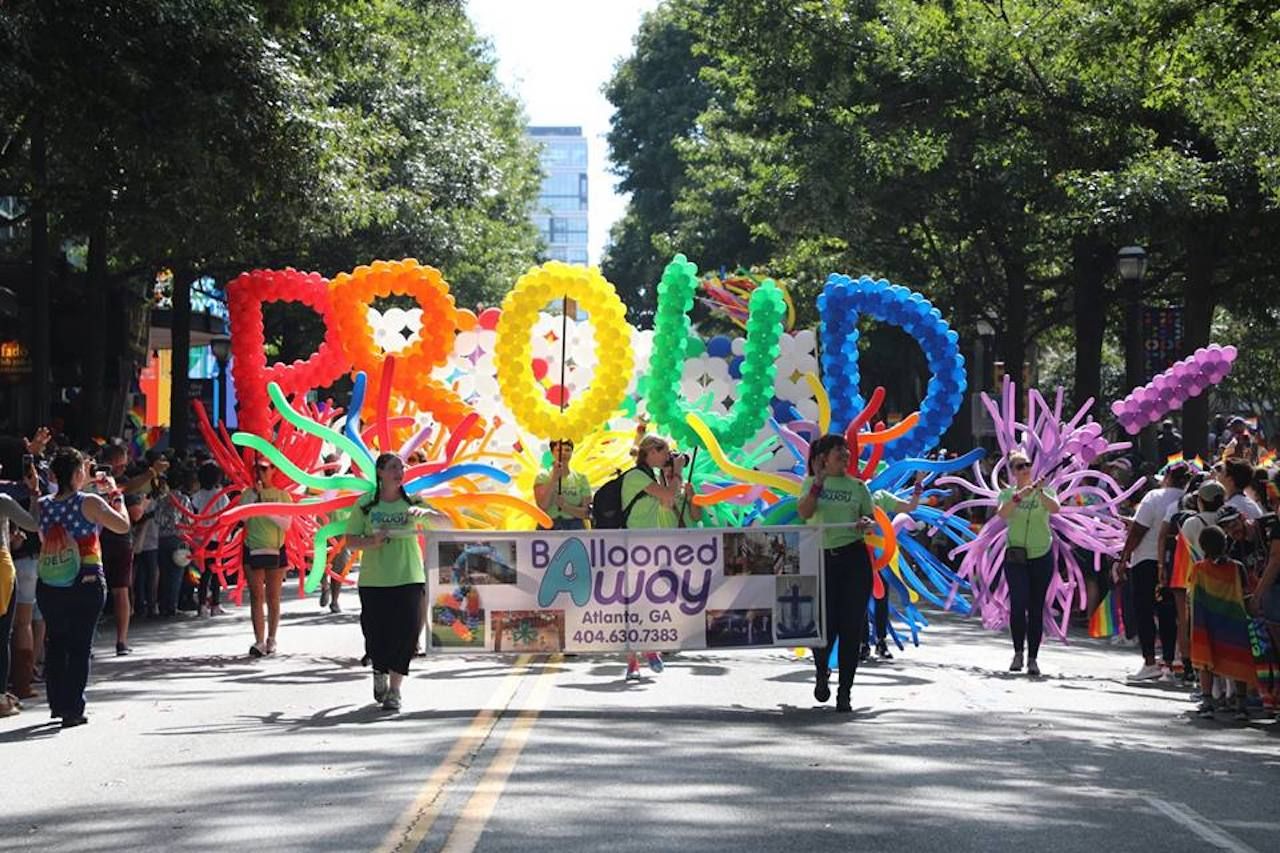 Unlike other pride events taking place around the country, Atlanta Pride is meant to commemorate National Coming Out Day, which takes place on October 11 — meaning that the city’s pride doesn’t take place during the summer but during the weekend of October 11-13. This particular pride celebration feels even more inclusive than the rest with an accompanying Trans March and Dyke March to the typical Pride Parade, along with live entertainment and celebrations that last well into the night.

More than anything, Providence, Rhode Island, is home to an incredibly tightknit community of queer people of all varieties — and this fact is fully represented in Rhode Island Pride, located in Providence. And, though it is smaller in scale compared to others of its kind, the all-night block parties and Illuminated Night Parade seems magical and inclusive enough to beat out the bigger competitors. 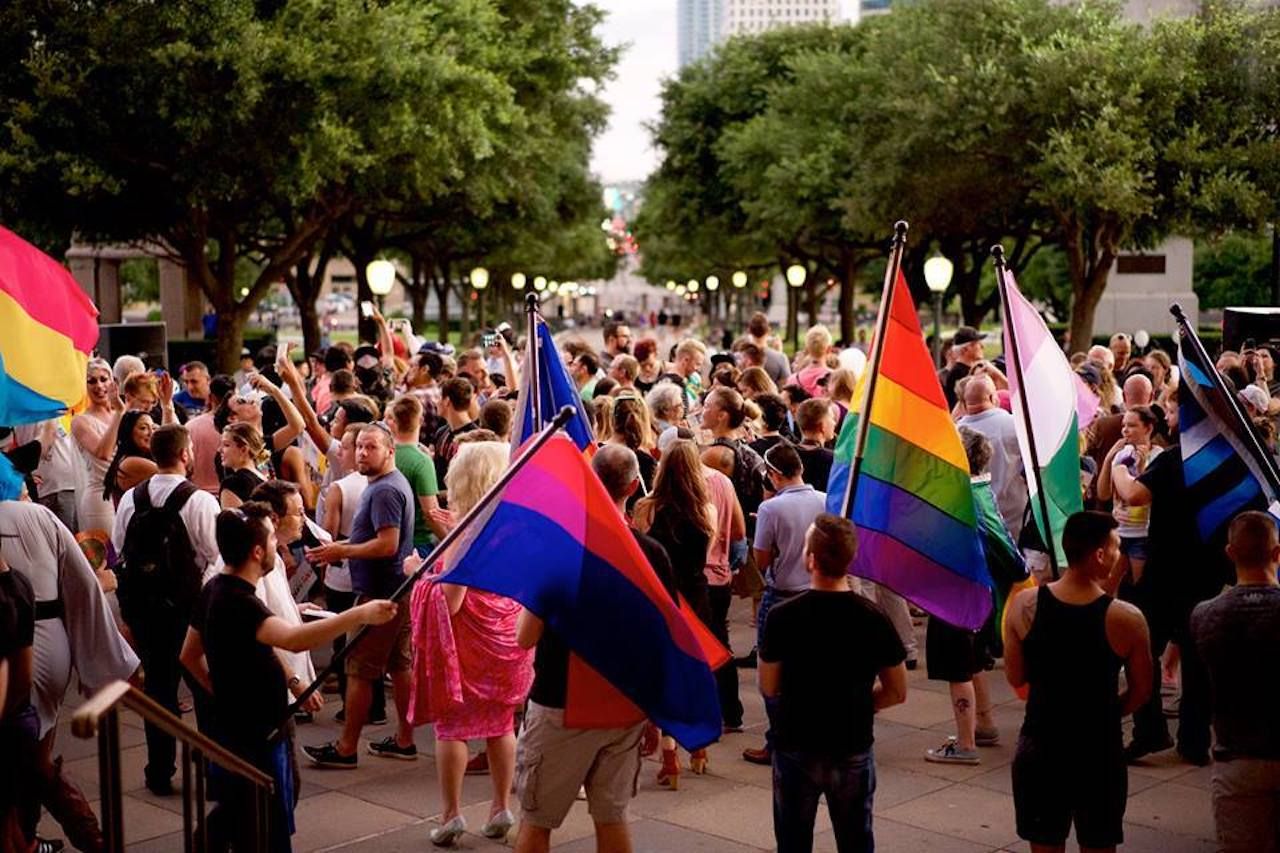 For an entire week in August, Texans come together to celebrate the queer community in a truly magical way — with Austin Pride taking place August 2-10. Each year of the week-long festival has a theme, and in 2019, Austin is celebrating the LGBTQ community through the Boogie Wonderland theme — so bring your dancing shoes. After you’re done boogieing, bring the kids to the Drag Queen Story Time or buckle in and get ready to enjoy a plethora of games and events over Austin’s most colorful week of the week.

Often considered to be the very best college town pride parade, Bloomington Pride somehow manages to combine the culture of college life with that of the LGBTQ community in a positive, uplifting way. Taking place on Saturday, August 31, Bloomington Pride is an all-day celebration typically ending at the local queer bar, The Back Door, which is known for its raucous celebrations during this day. 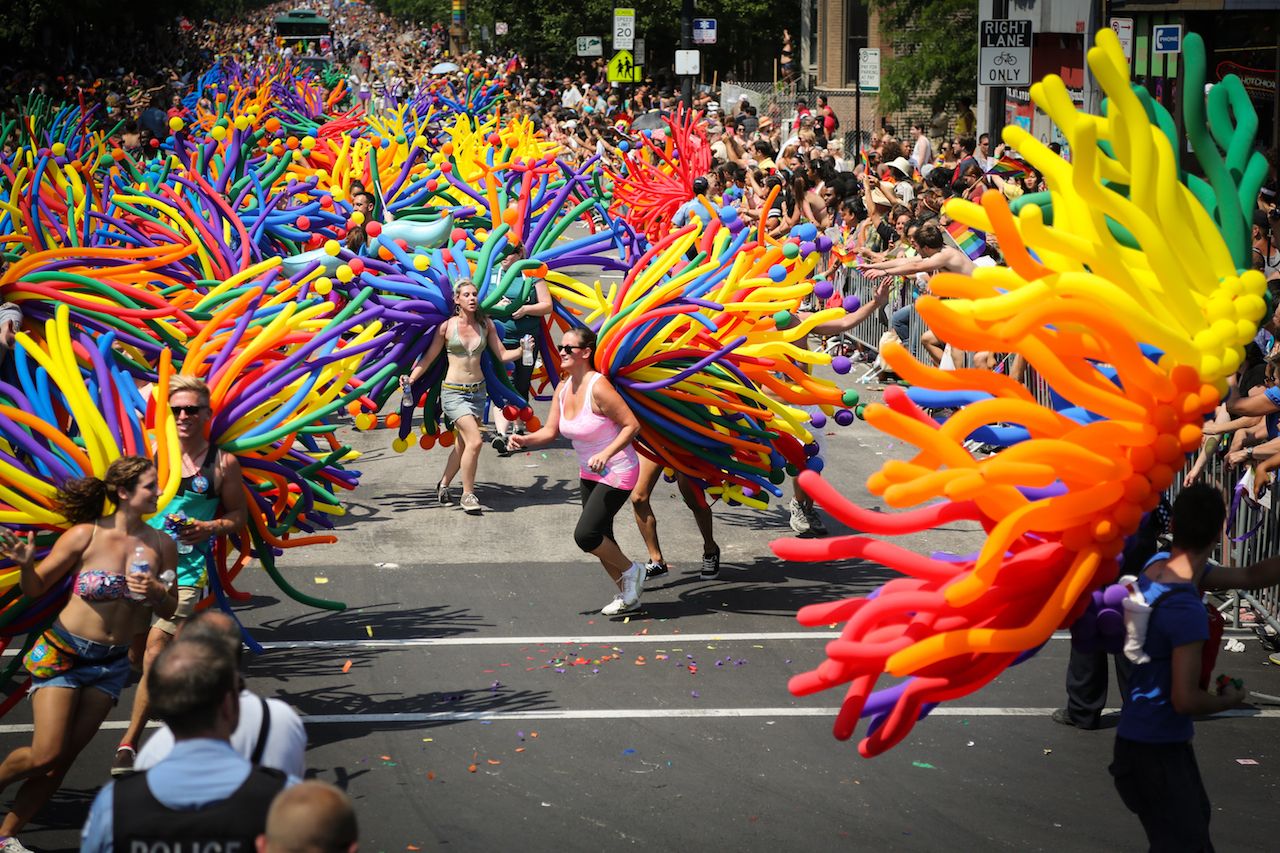 Even if you’re a seasoned pride festival attendee, Chicago Pride possesses the ability to completely sweep you off your feet. In fact, 2019 will be the first year that the city holds its Pride in the Park, with headliners like Iggy Azalea and Steve Aoki rumored to be greeting thousands of cheering LGBTQ fans on June 29. Before that, during the weekend of June 22-23, Chicago’s Pride Fest is yet another LGBTQ music festival that offers performances by industry superstars like Leann Rimes and Pabllo Vittar.

Despite its rather rough start, Kalamazoo Pride is now a haven for stellar drag performances from drag world superstars like Thorgy Thor and Pearl. During the weekend of June 7-8, visitors can expect a welcoming parade, vendors, and a host of activities that prove to be some of the best in the Midwest.

From May 31 to June 9, Beantown becomes Queentown with thousands of queer people descending on the town of Boston for a week-long celebration of LGBTQ culture. Throughout this week, festival goers can look forward to a Pride Family Movie Night, an athletic High Heel Dash, the Back Bay Block Party, and quite a bit of other events that work to forever instil the pride of this culture into the city of Boston — all thanks to Boston Pride. 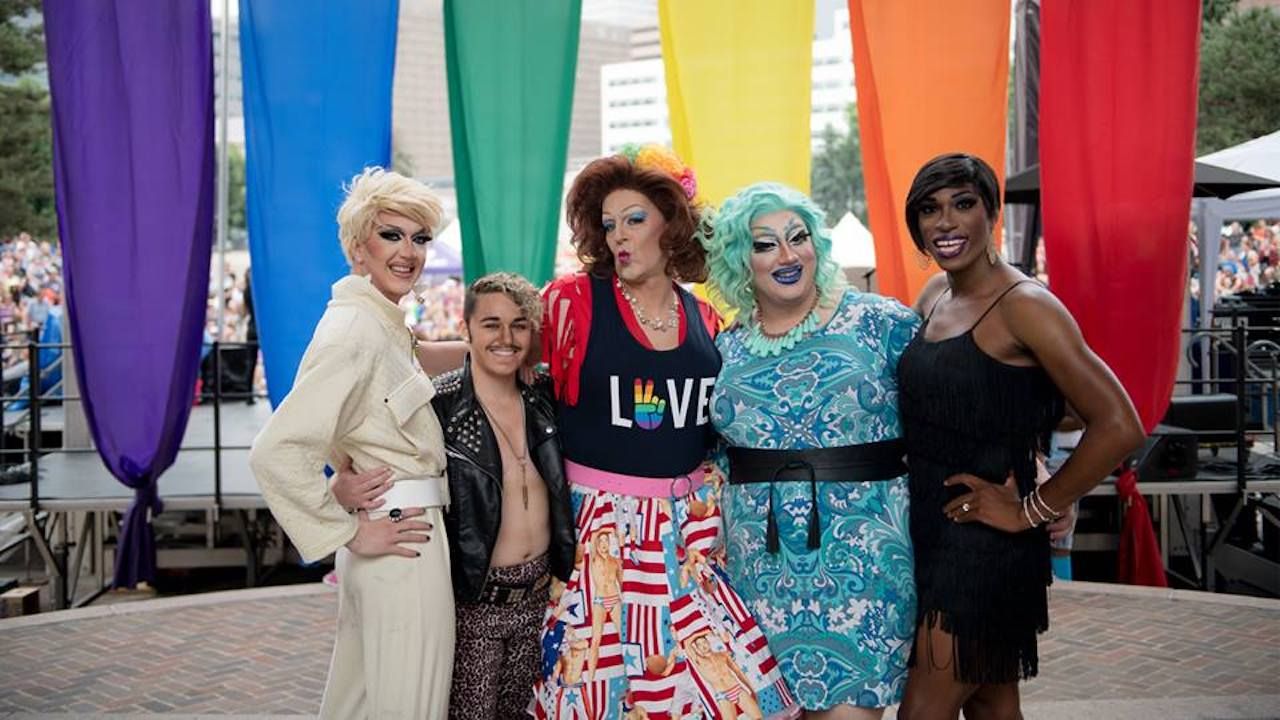 Every year, the Mile High City welcomes nearly 400,000 visitors to its PrideFest — taking place this year June 15-16. Though the performers have yet to be announced, other activities like the Big Gay 5K Race and Dyke March or a walk through the Rainbow Alley — a safe space that features a health and counseling center, games, and a drag closet — are an annual event.

Houston Pride welcomes everyone in the rainbow to enjoy its annual event — especially those who classify themselves as “space geeks and hippie freaks.” On June 22, the city of Houston comes alive with pride — doing so in a truly theatrical way, celebrating the 50th anniversary of the Stonewall Riots with a “Summer of ‘69” theme. And, though the events of the annual pride celebration are still unknown, revelers can expect themed parties and performances that last well into the night. 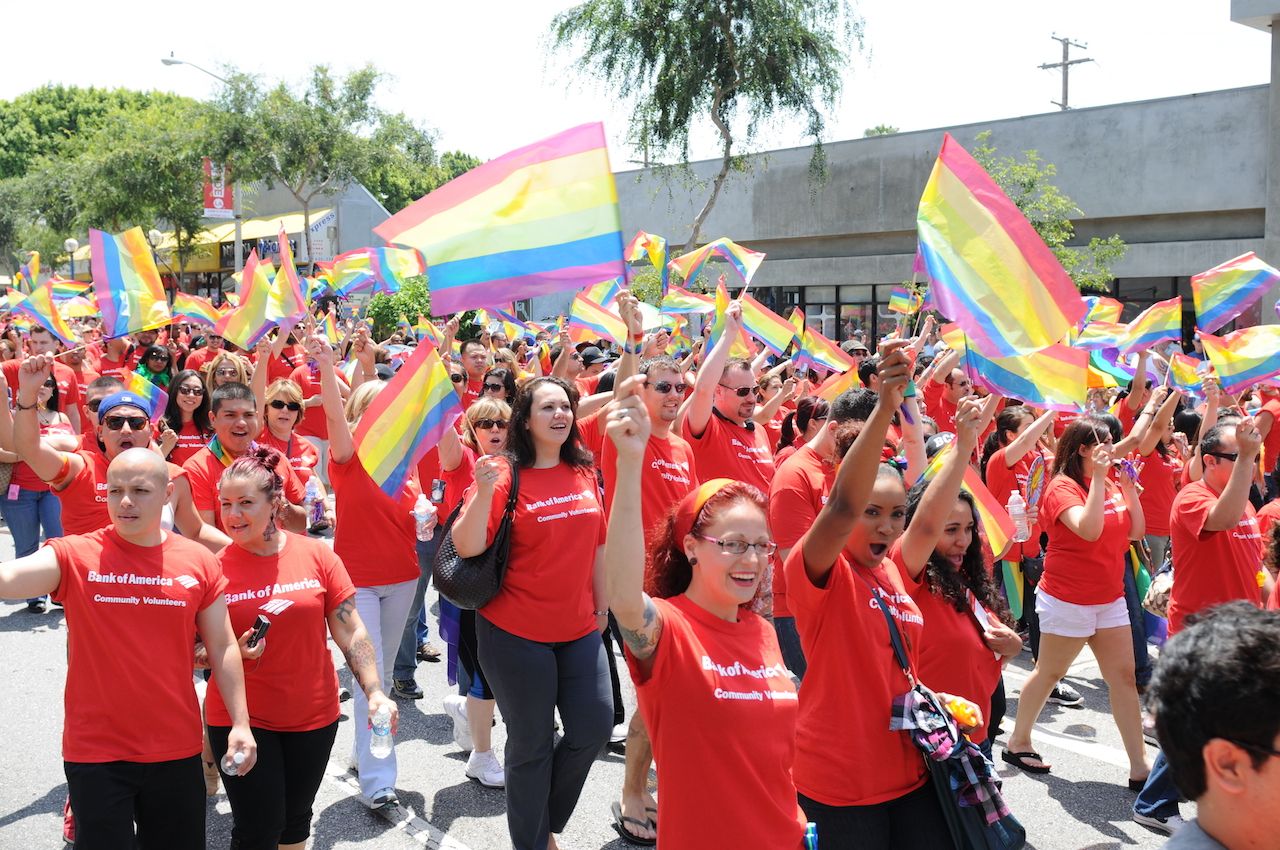 It’s no surprise that this glittery destination is home to one of the best pride events in the entire nation — some say in the entire world. Set against the backdrop of West Hollywood during the week of May 31 through June 9, LA Pride features an impressive array of activities from LGBT Night at the LA Dodgers to the elegant Trans Brunch. Aside from these activities, visitors can look forward to a lively concert lineup — this year featuring Meghan Trainor and Ashanti among its headliners.

More so than most other pride events taking place across the world, the Capital Pride event in Washington DC offers an activity for every queer person on the spectrum. Throughout the months of May and June, Washington DC holds a Youth Pride Day, Silver Pride (for those in the LGBTQ community over the age of 60), Trans Pride, Black Pride, Latinx Pride, API Pride, and a special event to commemorate the anniversary of the Stonewall Riots. 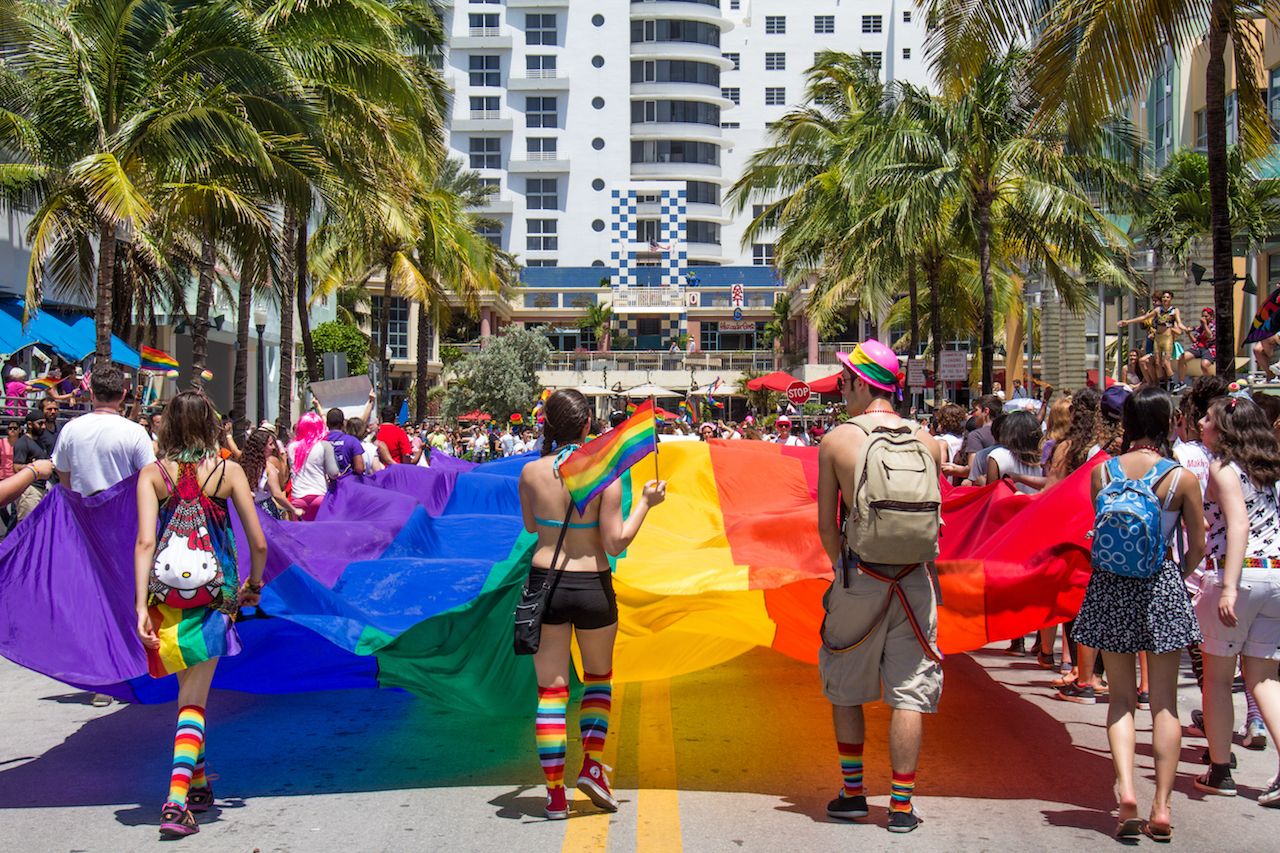 As you can likely imagine, Miami Beach Pride packs a sultry punch, and while it has already taken place (this year, Miami Beach Pride took place over the week of April 1-7), visitors to this infamous pride event can expect to enjoy events like the Miss Miami Beach Pride Pageant and LGBTQ pool parties. With that said, it might be time to work on your beach body.

If you’re looking to beat the cold temperatures of autumn, head to Orlando Come Out With Pride on October 12. While the entertainment has yet to be released, this celebration always proves to be quite massive, containing 100 vendors and a whole host of activities that are set to take place around the beautiful Lake Eola Park in downtown Orlando. 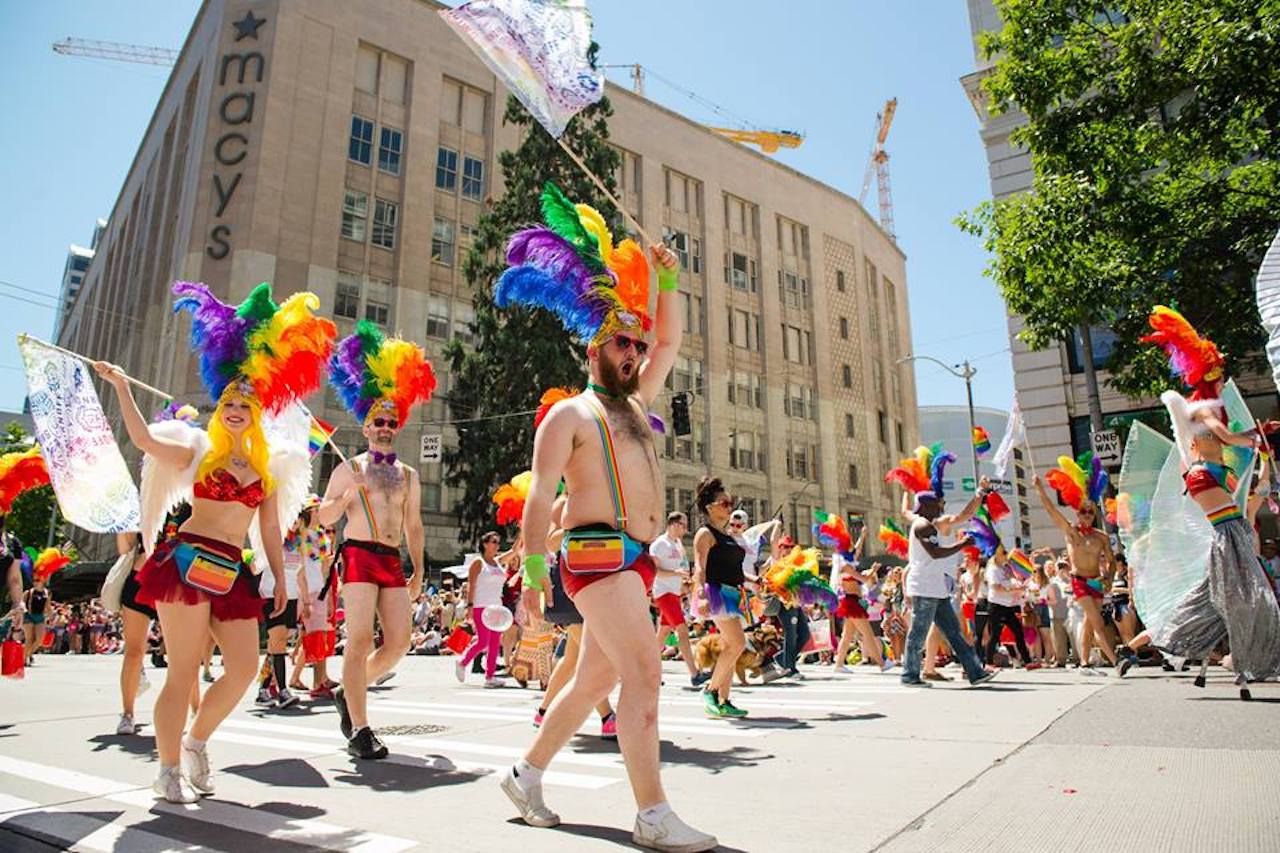 Throughout all of June, the city of Seattle celebrates LGBTQ culture with hipster-approved queer events like the Queer Art Walk, the Capitol Hill Clean Sweep, and multiple festivals with food, vendors, and live entertainment. Then, at the end of this month-long celebration, on June 30, the Seattle Pride Parade promises to entertain its LGBTQ spectators.