Have you ever wondered how to eat a cactus? The most obvious answer is very carefully, since most cacti are shrouded in sharp spines. Yet spines aside, you can enjoy certain edible cacti just about every which way imaginable – raw, grilled, fried, or stewed, as well as juiced, jellied and in cocktails.

Cacti show up on restaurant menus across the Southwest, and they can be shipped right to your door. Here’s what you need to know before trying this regional delicacy.

First things first: What are edible cacti and are all cacti edible?

For the sake of clarity, the singular form is cactus, while two or more are called cacti. Cacti are succulent plants found around the world, but most notably in arid or semi-arid climates. They can be small, medium, sized, and some can even grow as tall as trees.

Culinary cacti aren’t the latest new food craze. Indigenous peoples living in arid regions have relied on cacti and other desert plants as medicine and food staples for thousands of years. The Tohono O’odham people, and before them the Hohokam, settled in the Sonoran Desert area now known as northern Mexico and the state of Arizona. The saguaro cactus in particular represented a sacred plant used for food and in important seasonal ceremonies.

Not all cacti are safe to eat, and some are harmful to humans. There are five main varieties of cacti that are sought after as culinary delights, either for the fruit, the plant itself, or both: dragon fruit, prickly pear, barrel, cholla, and saguaro. However, some cacti should be avoided because they contain alkaloids strong enough to cause severe vomiting, hallucinations, and other gastrointestinal distress. These include the Bolivian, peyote, and San Pedro cacti.

How to eat cactus pear and other parts of the plant

If you’re new to eating cacti, it’s probably best to stick to the fruit and vegetable section of your favorite specialty market. Here, you’ll often find a seasonal selection of cacti fruit and flesh, usually with the sharp spines already removed.

If you’re in a desert area where cacti commonly grow, consider signing up for a desert dining walk led by an experienced naturalist. If you’re out foraging on your own, stop. Some cacti, including the saguaro, are protected by federal or state laws that prohibits the general public from harvesting. Other cacti, like the prickly pear, might require a harvest permit if you’re on state or federal land.

Bring a field guide if you’re determined to do the harvesting on your own. In general, wild food foragers suggest you stay clear of any plant that excretes a milky or waxy sap. Even if it’s not toxic, the sap may irritate your skin. It’s also important to always harvest sustainably and only taking a few fruits from any one plant.

With the basics in your back pocket, here’s what you need to know about enjoying the five most common types of edible cacti.

The most common types of edible cacti

Perhaps you’ve got the chutzpah to harvest fruit from a cholla cactus, or maybe you’re tall enough to snag saguaro fruit without a ladder. Even if you just shop your local specialty market for dragon fruit or order nopales tacos and a prickly pear margarita at a Southwest restaurant, consider giving cacti a try. 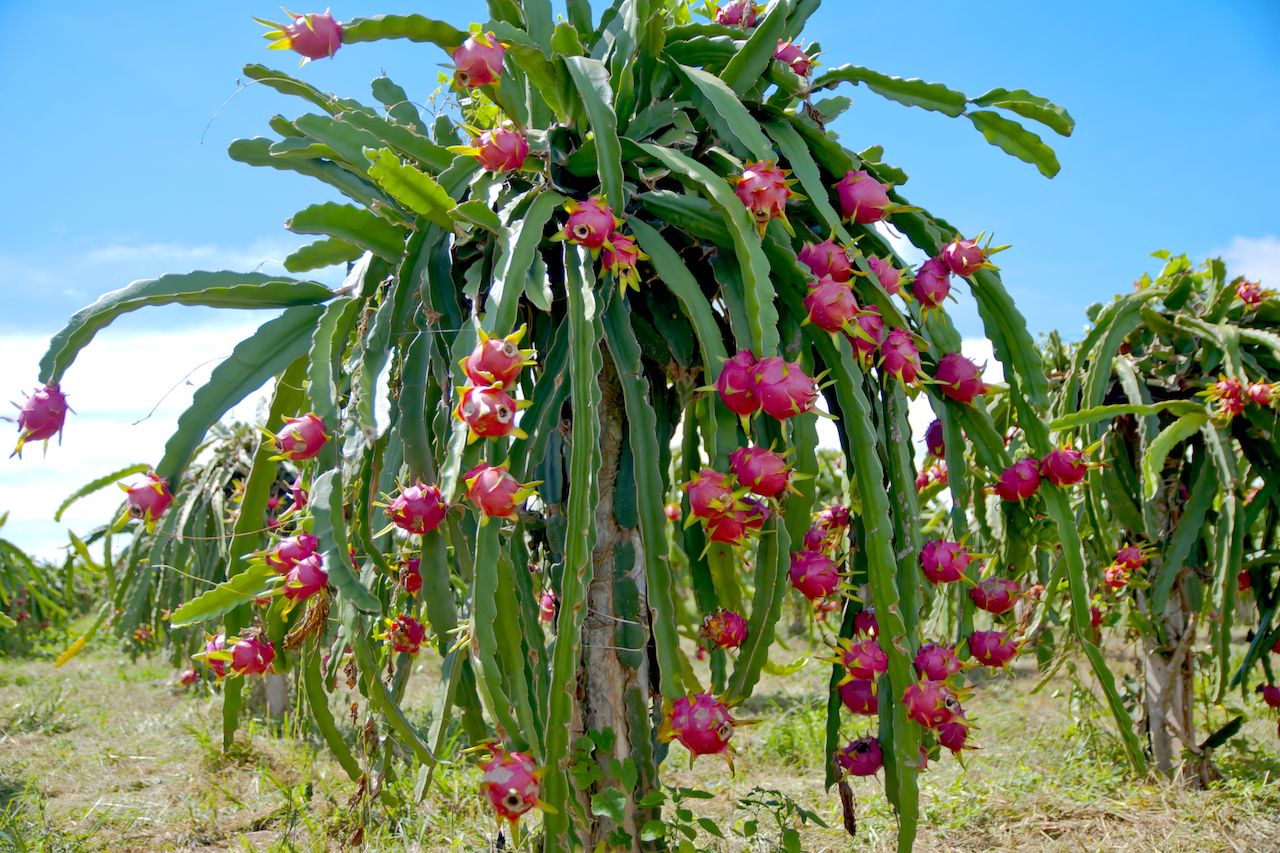 Dragon fruit can be considered your starter cactus because it’s both easy to find in stores and easy to handle. It’s commercially grown in tropical and subtropical areas across the globe, including Mexico, Southeast Asia, and Australia. The dragon fruit gets its name from its leathery skin and scaley-looking spikes. In Mexico and Central America, it’s also called pitaya or pitahaya, and in Asia it’s often referred to as strawberry pear. The red variety of dragon fruit is free of spikes or thorns, while the the yellow variety has thorns on the skin (though the yellow variety you get from the store is usually dethorned).

To eat dragon fruit, simply cut the fruit in half and scoop the flesh out with a spoon. When you cut into it, you’ll notice the flesh resembles kiwi with small and crunchy edible seeds distributed throughout. Depending on the type of dragon fruit you select, the taste can range from sweet to sour, and it’s often quite mild.

Dragon fruit is great in smoothies and looks appealing on a fruit tray or added to a tropical fruit salad. Whichever way you enjoy it, you’ll get the added benefit of antioxidant vitamins and minerals like vitamin C and magnesium in every serving. 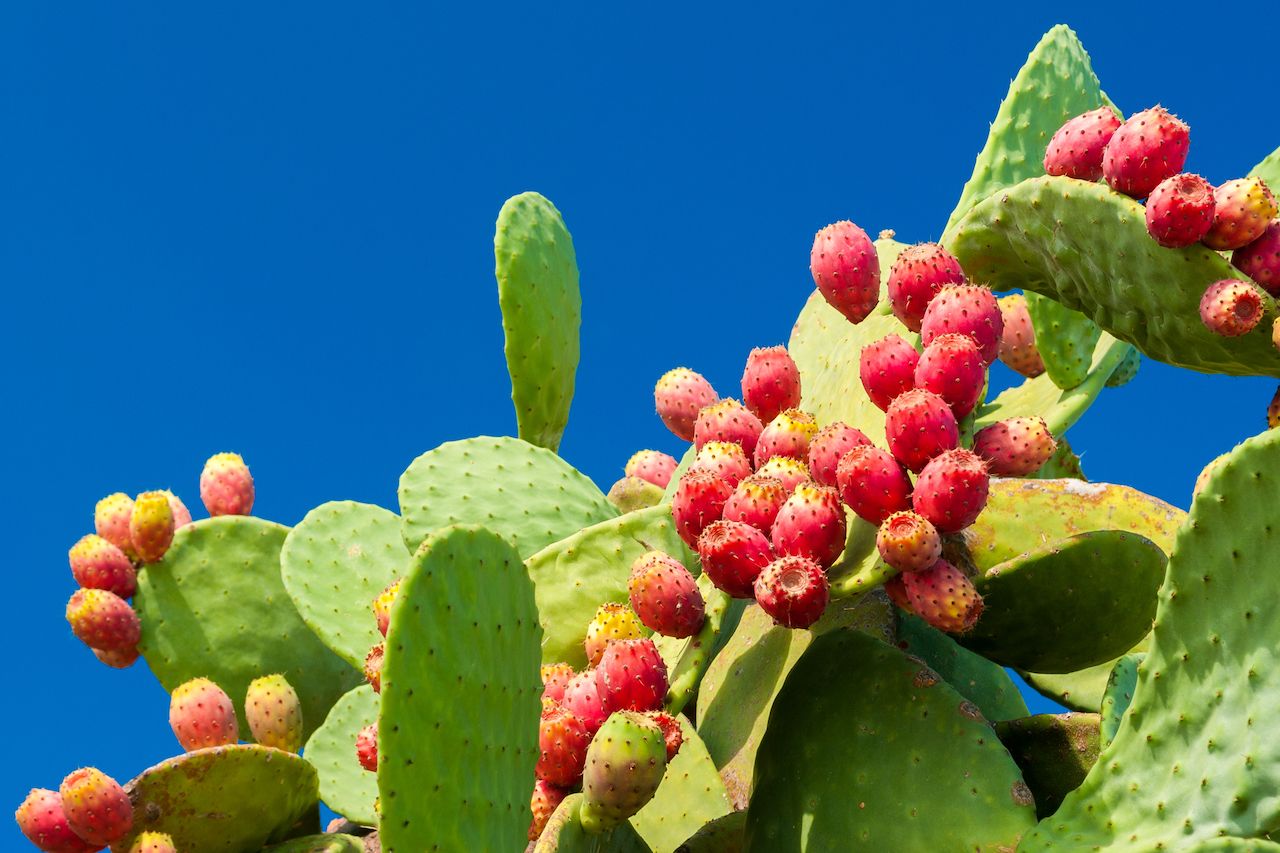 The prickly pear is another variety commonly found in specialty markets. The fruit is called a tuna or fig, and the pads called nopales. Both the pads and ripe fruit can be consumed raw or cooked in a variety of ways. You can also check the canned goods aisle for cooked and ready-to-eat nopales.

Prickly pear pads are usually available year-round. They have a slightly tangy vegetal taste and are a bit slimy, like okra. Serve fresh pads raw in a chopped salad or add them to stew or soup. They’re tasted baked or charcoal grilled, as well. In Mexican cuisine, nopales are commonly cooked with scrambled eggs, served in tacos, or baked with cheese.

The ripe tunas are about the size of a large plum and range in color from golden orange to dark red. At peak ripeness, the fruit is a delightful flavor bomb of sweetness that tastes partly like watermelon and partly like strawberry. The fruit is also loaded with goodness in the form of beneficial vitamins and minerals. If you’re in the Tucson area, prickly pear margaritas are a seasonal specialty at the Tohono Chul Bistro in the awe-inspiring Tohono Chul Botanical Gardens. 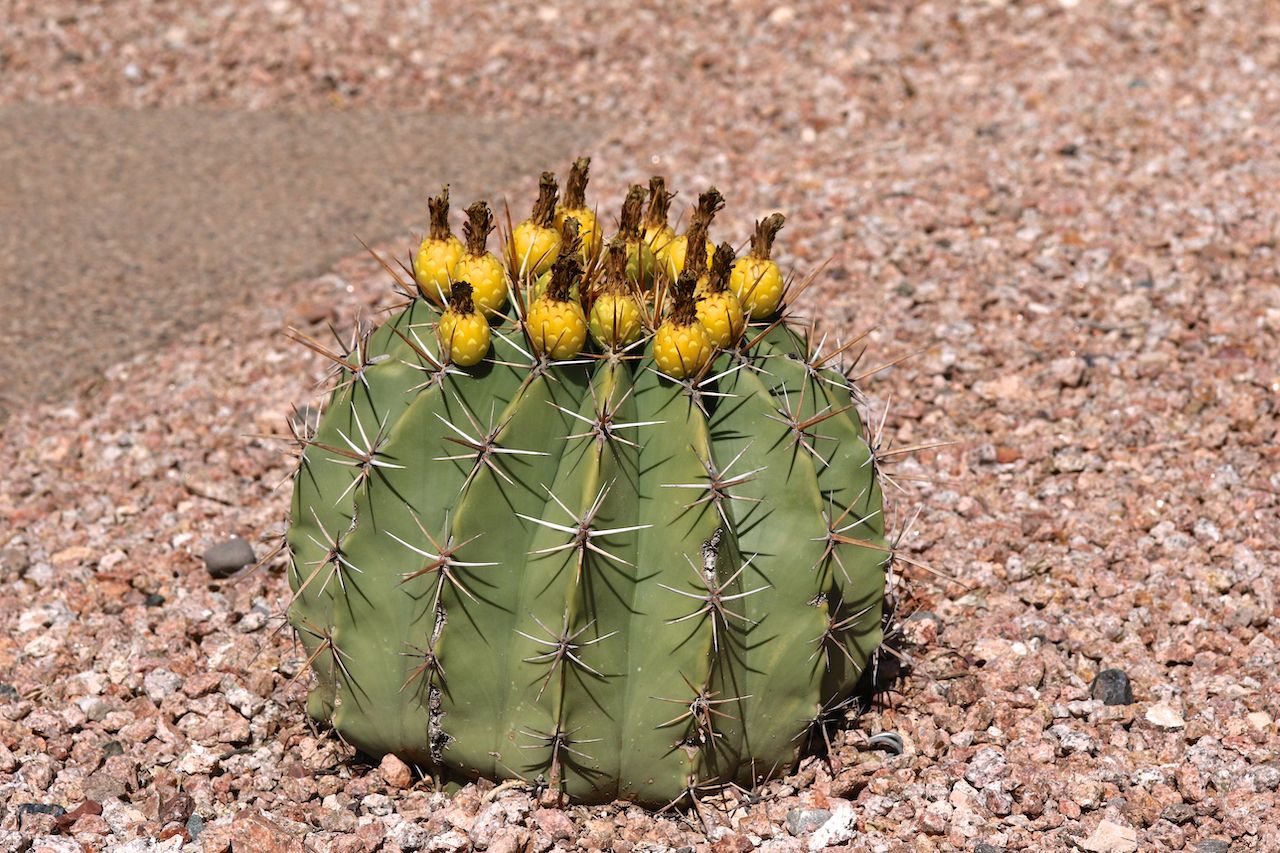 The cactus barrel is prized for its fruit, which resembles tiny pineapples. The fruit has a tangy, lemony flavor. While the body of the barrel cactus is covered in long, fishhook-like curved spines that you’ll want to avoid, the fruit itself is spine-free. The fruit is typically from November to March, and it’s typically a type of cactus that’s foraged versus served in a restaurant or sold in the store. Harvesting the fruit is easy: Just grasp the fruit and give it a twist. Cut the dried flower bud off and slice the fruit in half and you’ll find a center full of tiny black seeds. The raw seeds are edible but bland, though when they’re lightly toasted they have a lovely nutty taste. Use them in bread dough and muffin mix, blend into smoothies, or serve as garnish on salads. The fruit itself can also be dried and added to soups and stews.

The fruit is also okay to eat raw, although it might be too tart for some palates. Carolyn Neithammer’s book Cooking the Wild Southwest: Delicious Recipes for Desert Plants features recipes for dishes like barrel cactus and pineapple cake, barrel cactus and lemon marmalade, and crispy barrel cactus seed chips. 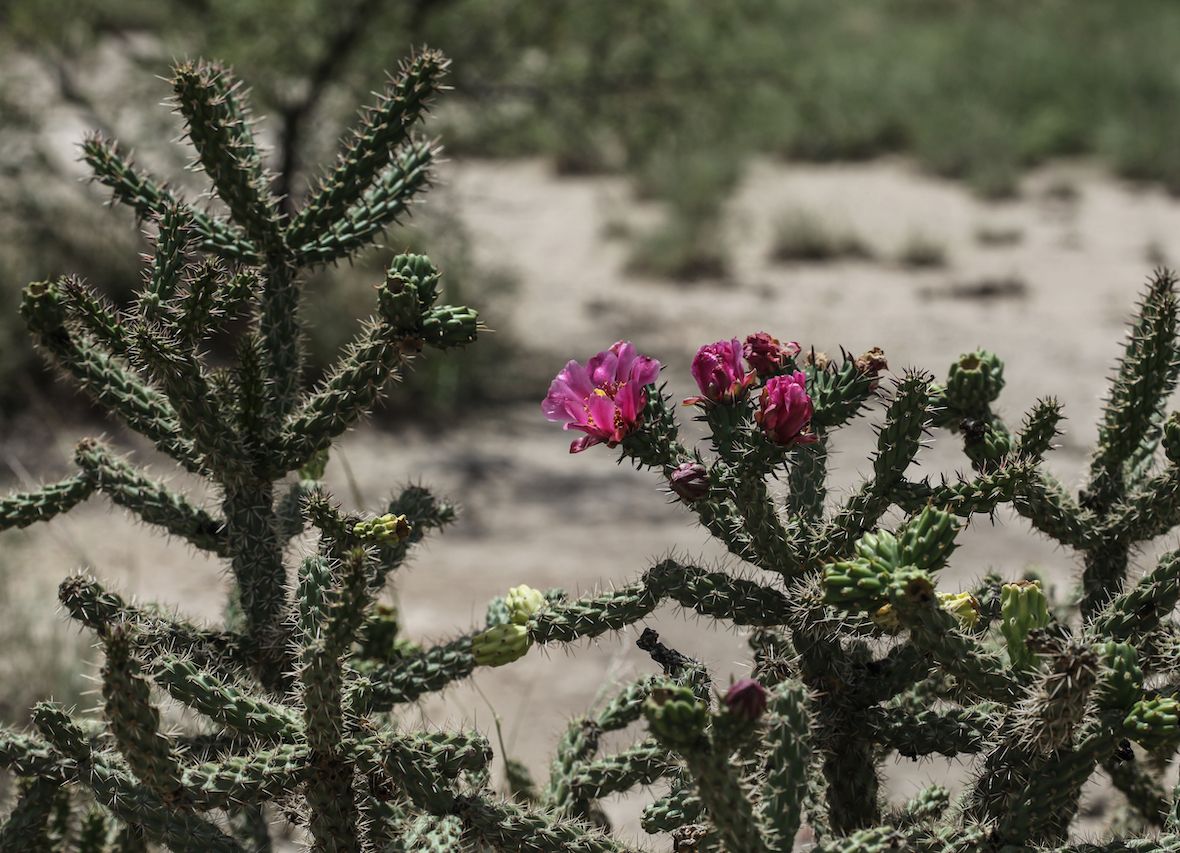 The cholla (pronounced choy-ah) is found all over the American Southwest. You can eat its fruit buds, which are harvested from March to early May. But be warned: the cholla will try to attack you first. The cholla is one crazy cactus. It has a woody central stalk from which thin arms covered with long, thin, sharp spines grow in every direction. One variety is nicknamed the “jumping cholla” because of how easily small parts of the plant detach and stick into the skin or clothing with just the slightest touch. This is one reason why you won’t find cholla on many restaurant menus.

For those intent on eating cholla, opt for buckhorn, staghorn, or pencil cholla. Next, don a suit of armor, a welder’s helmet, thick leather gloves and arm yourself with a long pair of tongs (or at least wear thick pants and a hardy long sleeve shirt). Grasp the bud with tongs and give it a twist. If you survive the harvest, you can use a small chef’s blow torch to easily dispatch the fruit’s spines, then follow a standard simple syrup recipe to boil the fruit down. Cool, strain, and use the cactus bud syrup in cocktails or pour it over pancakes or anything that can use a little sweetener.

If you need to eat cholla cactus buds to survive in the wild, you can eat them raw. Good luck. 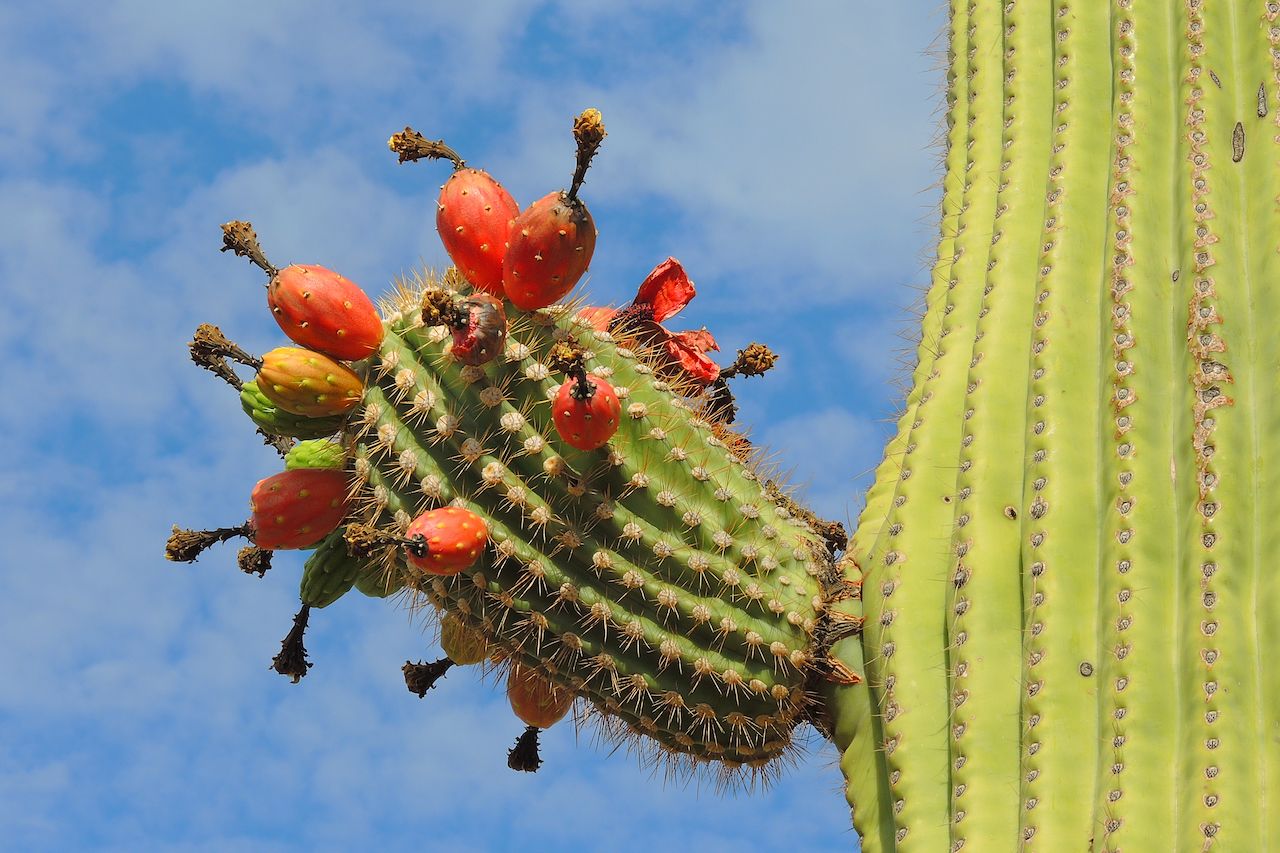 The fruit of the stately saguaro is similar to prickly pear fruit and is harvested from mid-May through July. In Arizona, the saguaro is protected by The Native Plant Protection Act, which was enacted to protect rare and culturally significant plant species. It’s unlawful to harvest any part of the cactus without a permit, although Saguaro National Park allows visitors to harvest a few pieces of fruit for immediate consumption (keep in mind that removing fruit from the park is prohibited, as is taking any other parts of the saguaro home with you).

Harvest is tricky because the fruit is often resting atop the saguaro like a flowery crown 20 or more feet from the ground. The Tohono O’odham used the ribs (skeleton) of dead saguaros to fashion a long, cross-shaped pole called a kuipad to harvest the fruit. The Tohono O’odham celebrate their new year at the start of the summer monsoon season with a saguaro fruit harvest called Ha:san Bak.

Fresh saguaro fruit is pulpy and loaded with tiny seeds. It’s very sweet and full of antioxidant vitamins and minerals. To eat it raw, slice in half and scoop out the pulp. You can also boil it down into a syrup, strain the seeds and use it for jams and jellies.

National ParksThe Tallest, Spikiest, and Most Colorful Cactuses You Can See in the Southwest
Tagged
Food + Drink Mexico Arizona, United States
What did you think of this story?
Meh
Good
Awesome

Curious About Edible Cacti? Here’s How To Eat This Southwest Staple
It Just Got a Lot Easier To Get Into Cancún From the US
3 International Psychedelic Retreats Poised To Take Wellness Travel Into the Future
Everywhere You Can Swim With Whale Sharks in Mexico
13 of the Most Underrated UNESCO Sites You Need To Visit

14 Scottsdale Airbnbs With Pools for a Southwestern Escape