The American Southwest gets a lot of attention for the dazzling desert landscapes and rock formations of its national parks, monuments, and recreation areas, but travelers would be remiss not to zoom in on the region’s smaller natural wonders. It might be hard to take your eyes off the towering arches, spires, hoodoos, canyon walls, and sandstone buttes to look to the ground and take in the plants that grow there, but it’s well worth the effort.

According to the US Fish and Wildlife Service, there are about 1,400 species of cactus in the world, most of which are native to the Americas and the Caribbean. Many of the cactuses that grow in the American Southwest are unique to the region, carry historical and cultural significance for the local Indigenous people, and are of such resilient beauty, it’s hard not to feel in awe at the sight of them.

Plan your national park adventure around these prickly stunners for lessons in local botany, history, and culture, and an eyeful of some of nature’s most amazing flora. 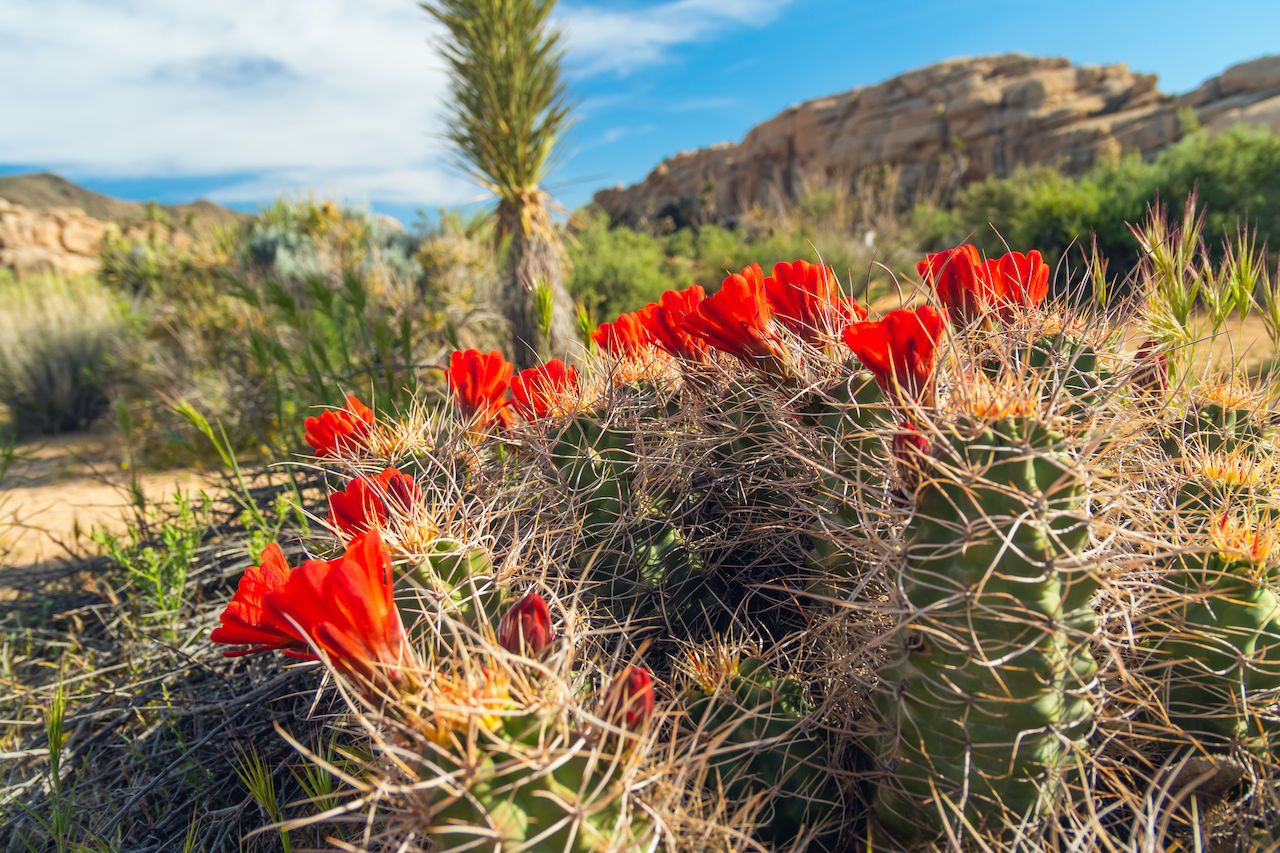 Native to the Southwest, the kingcup cactus, also known as the claret cup cactus, is a small species of cactus that occurs on its own or in clusters. Each stem is barrel-shaped and can be up to 12 inches tall and 6 inches thick. The kingcup cactus sports long, straight spines, as well as vibrant red flowers that open every morning, last two or three days, and from which hummingbirds love to feed. The fruit of the kingcup cactus is also red and edible when ripe. Indigenous people of the Southwest traditionally ate the kingcup cactus by burning its spines off and mashing it to use it in baking or in the making of candies. The fruit was eaten raw. 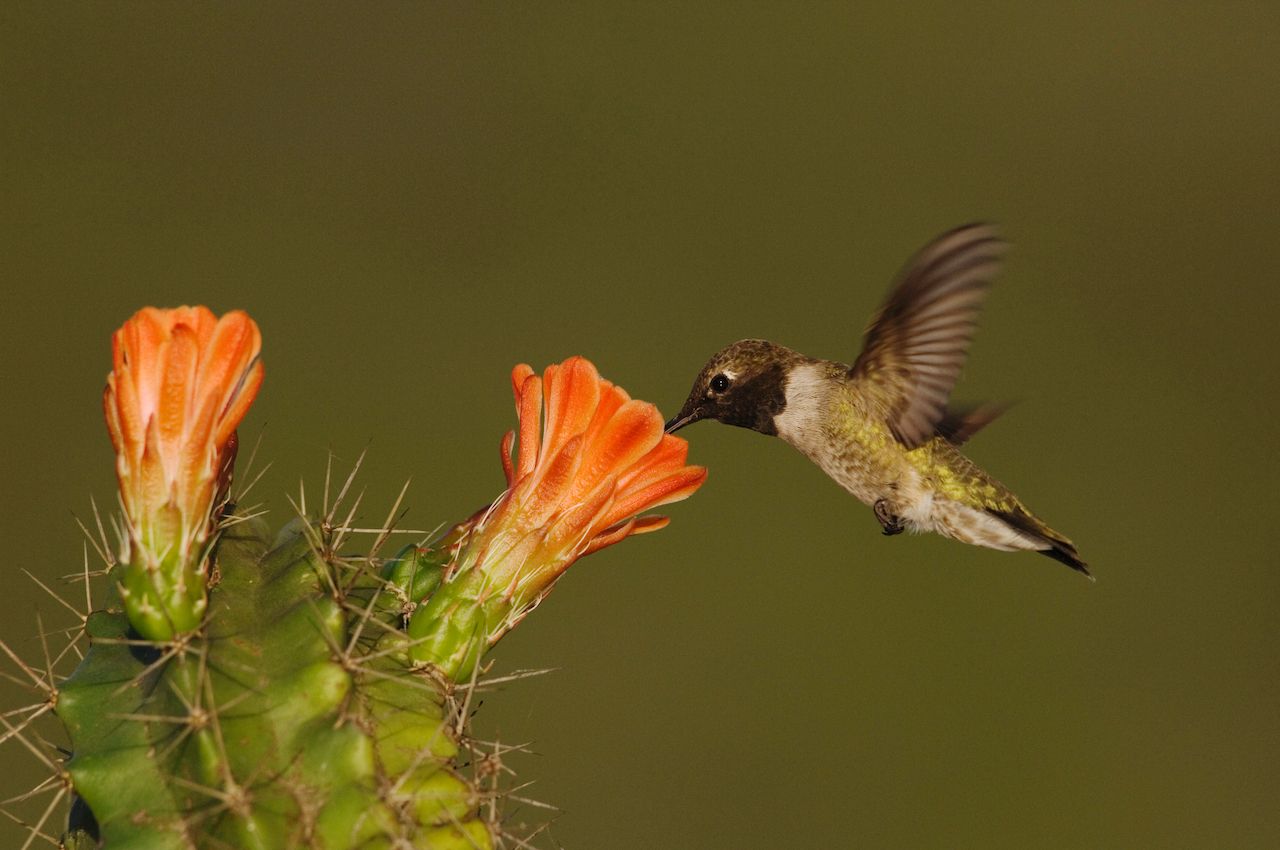 You can see the kingcup cactus in rocky cracks, shrublands and conifer woodlands, and desert grasslands primarily in New Mexico, but also in Arizona, Colorado, Utah, Nevada, and California. To see the beautiful blooms, visit between April and June in the lower elevations and in June-July in the higher elevations. 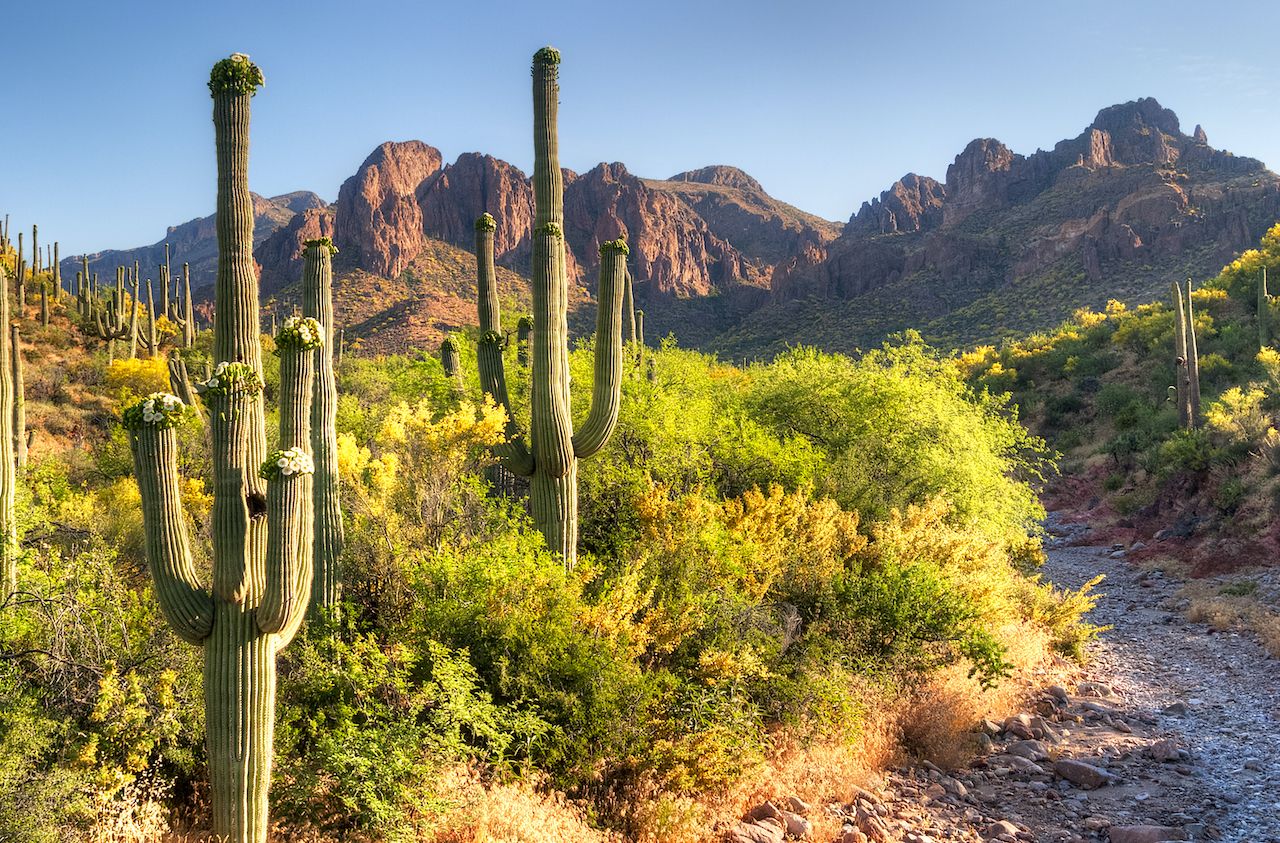 A symbol of the Southwest, the saguaro cactus is a towering and spiny plant that is only found in parts of Arizona’s Sonoran Desert. The lifespan of the saguaro is thought to be between 150 and 175 years, and during that time, each saguaro can reach 40 to 60 feet in height. Saguaros develop branches starting 50 to 70 years into their lives, but it can take up to 100 years for the plant to grow an arm. Around year 35, they grow large white flowers usually at the top of its trunk or arms that attract many pollinators.

In the past, the Hohokam people of the Tucson area used the ribs of dead saguaros to construct their homes. The Tohono O’odham, who are thought to be the descendants of the Hohokam people, consider the plant sacred and, like their ancestors, use the fruit (red and produced in the summer) to make wine, jelly, and candies. 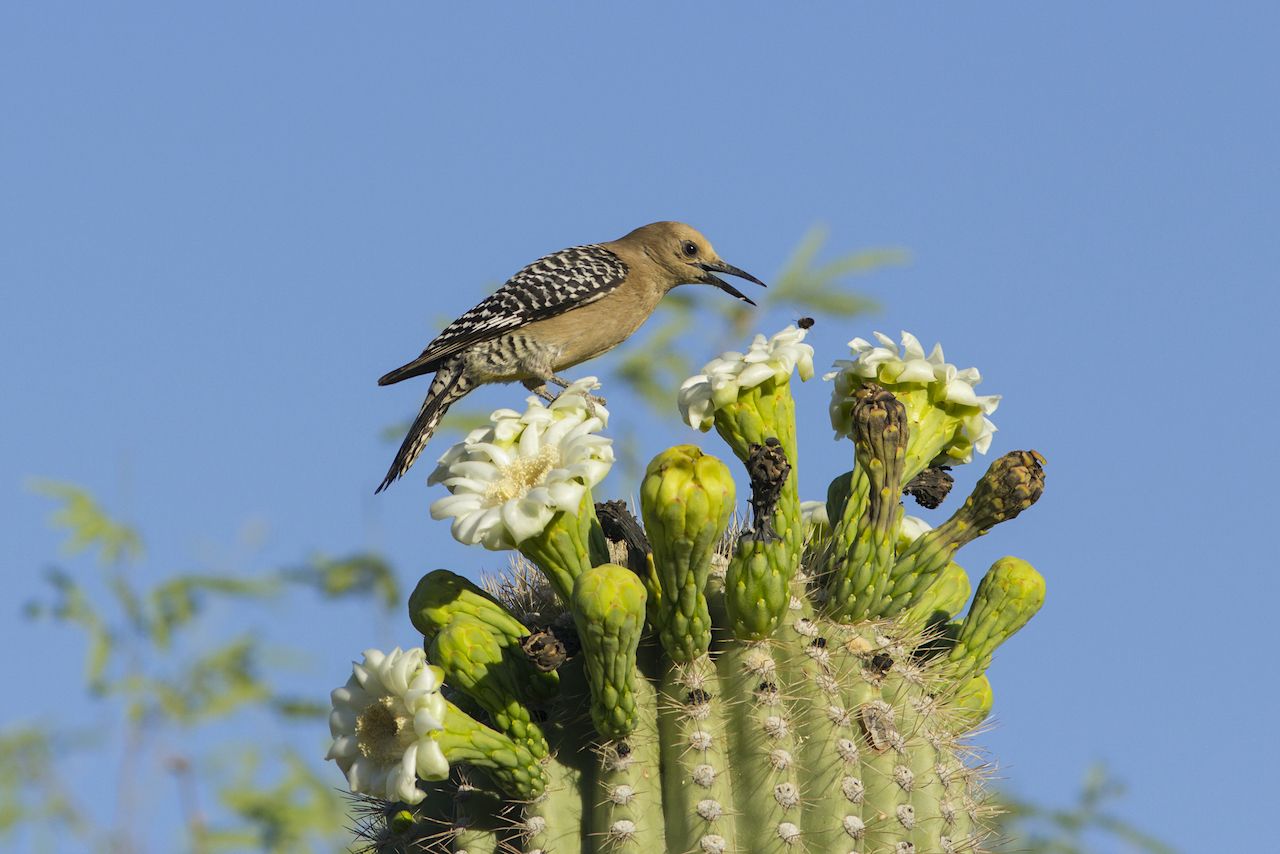 Visitors to the Sonoran Desert can witness the beautiful blooms that open at night and close in the afternoon between late April and early June, as well as the host of animals that make the saguaros their home, like the gilded flicker and Gila woodpecker who dig nests inside the cactus. Bald eagles have also been spotted nesting on saguaros. 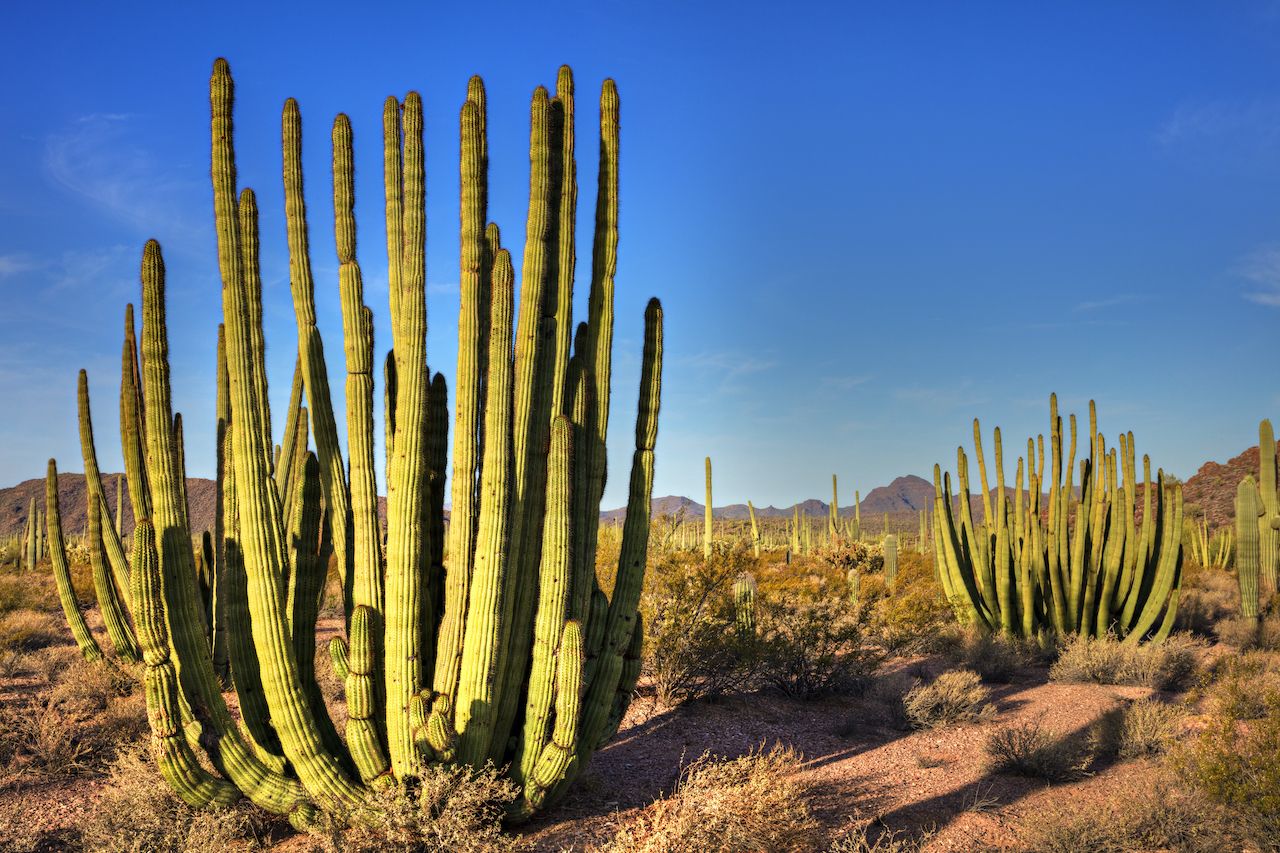 In the US, the organ pipe cactus is found almost exclusively in Arizona’s Organ Pipe Cactus National Monument, where they grow on south-facing slopes in order to survive the frost of winter. They are found in large clusters and can reach 10 to 20 feet in height and resemble the pipes of a church organ. Like the saguaro, the organ pipe cactus can live a very long life (over 150 years) and produce white flowers around age 35. The blooms are visible at night until mid-morning during May and June every year and produce red fruit after that. The fruit can be eaten when ripe. 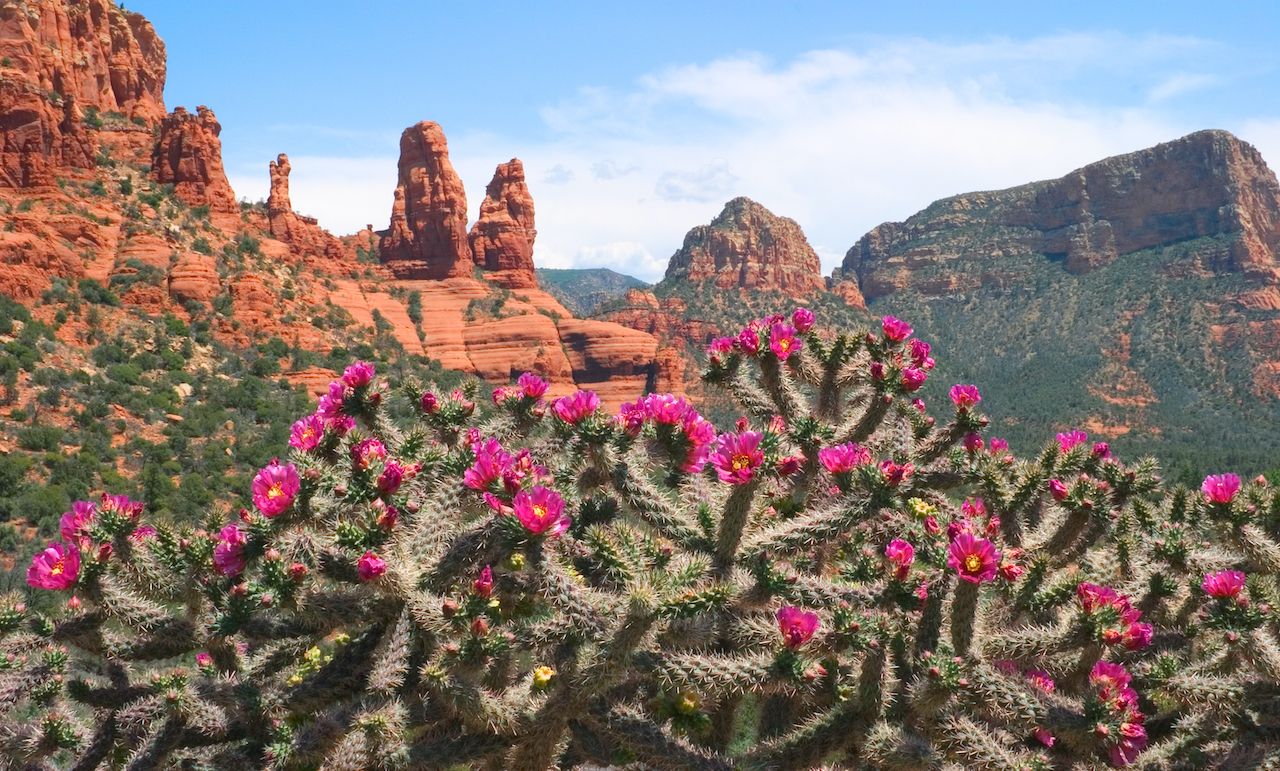 Also called the tree cholla, the cane cholla cactus is native to the Southwest, more specifically from Arizona, New Mexico, Colorado, Texas, Oklahoma, and Kansas. One among seven species of cholla cactuses, the cane cholla grows into a shrub of up to eight feet in height and produces bright purple and magenta flowers in May and June, followed by conical yellow fruit in the summer. 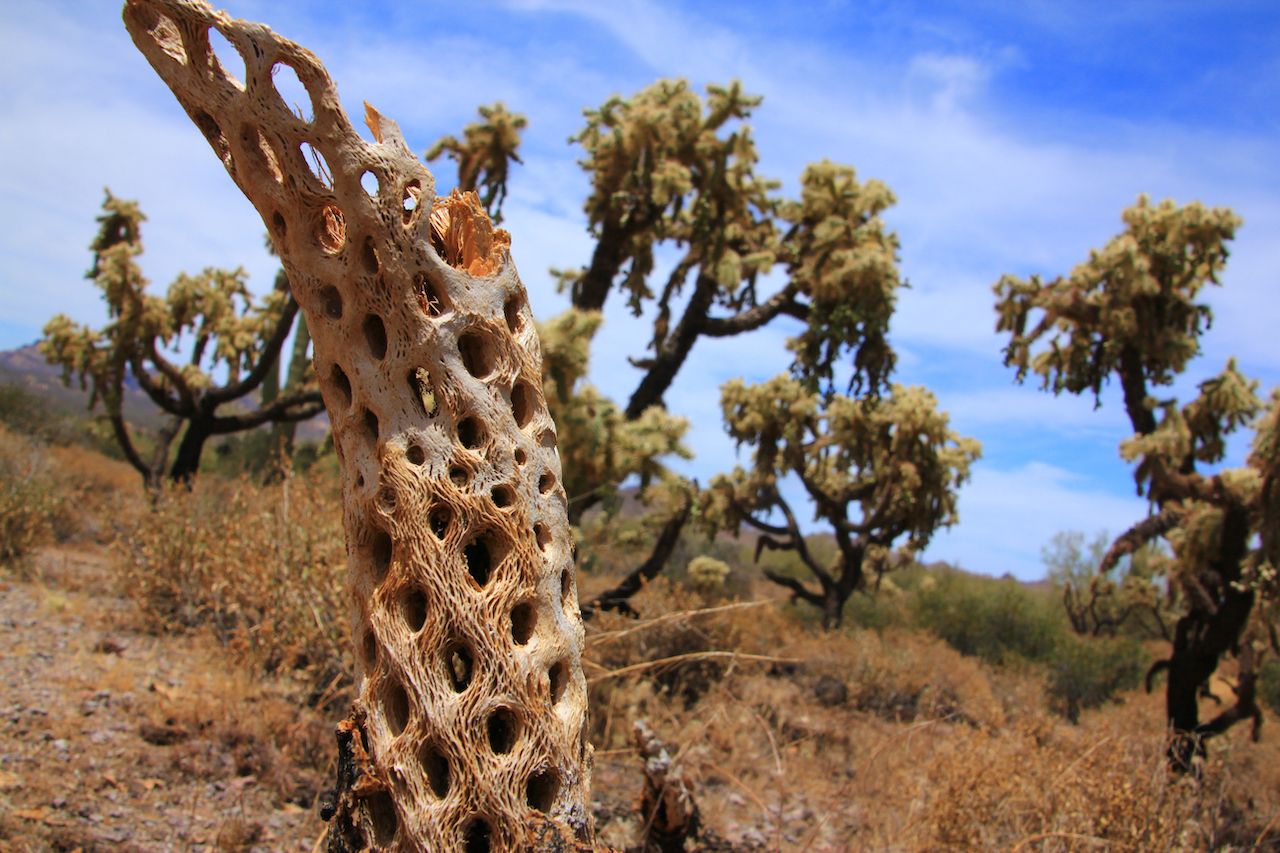 Like all cholla cactuses, cane chollas are made of cylindrical segments attached to one another that detach when in contact with an animal. The spines are known to be incredibly painful when in contact with the skin and hard to remove (the use of a fine-tooth comb is necessary). Local Indigenous people used the fruit, to either eat it raw, dried, stewed, and even ground in a flour. When the plant dies, its elaborately patterned wood is repurposed to make items of furniture or canes, hence its common name.

The cane cholla is the most common cholla cactus in New Mexico and can easily be spotted in White Sands National Park and Petroglyph National Monument. 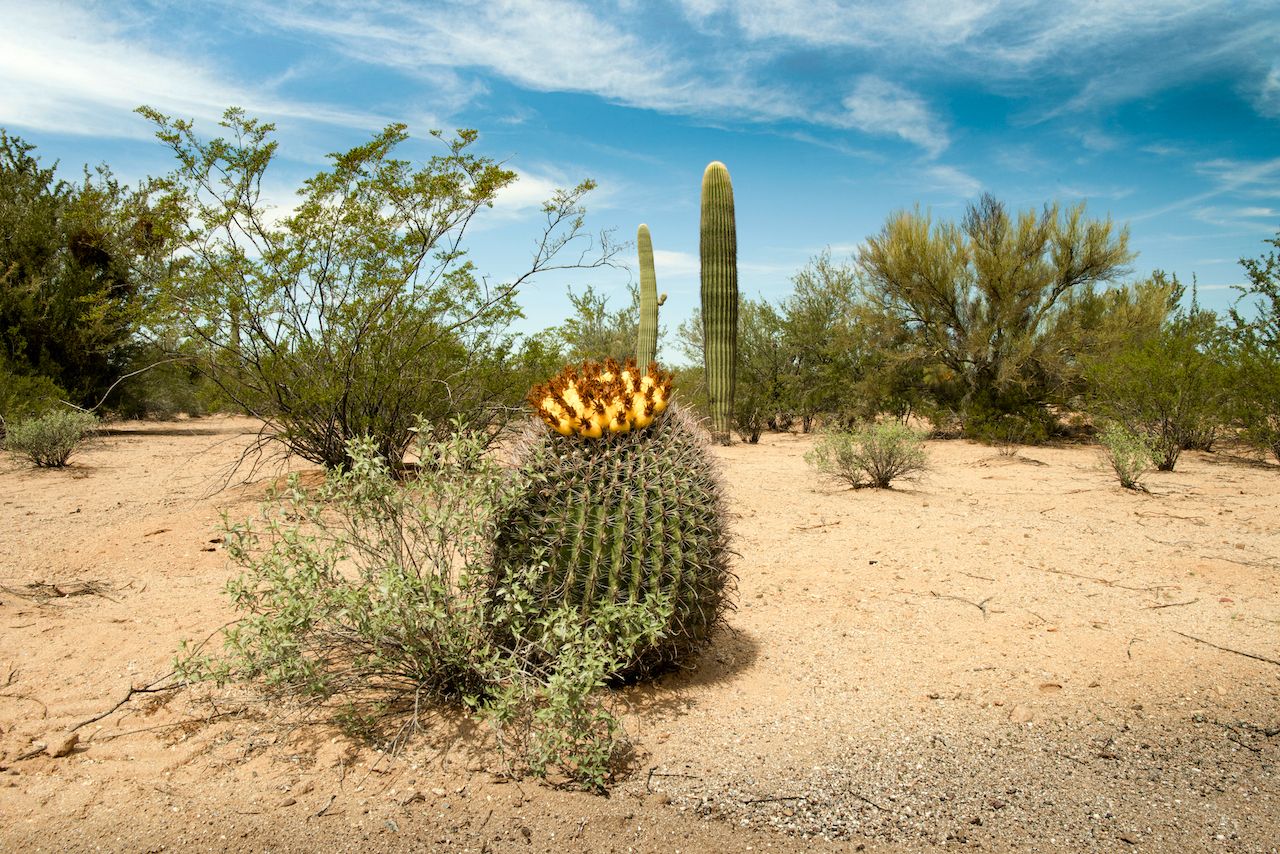 Like its name indicates, the fishhook barrel cactus has long hooked spines and is shaped like a barrel — and a big one at that. Measuring an average two feet in diameter and three to four feet in height, it can be as big as 30 inches thick and as tall as six to 10 feet. They can live between 50 and 100 years and during that time, produce red-orange flowers that bloom during the day from July to September, as well as yellow fruit afterward. Like the saguaro cactus, the fishhook barrel has a pleated aspect that allows it to stretch when it absorbs water. The fishhook barrel cactus is also known as the compass barrel cactus because it tends to lean toward the southwest. 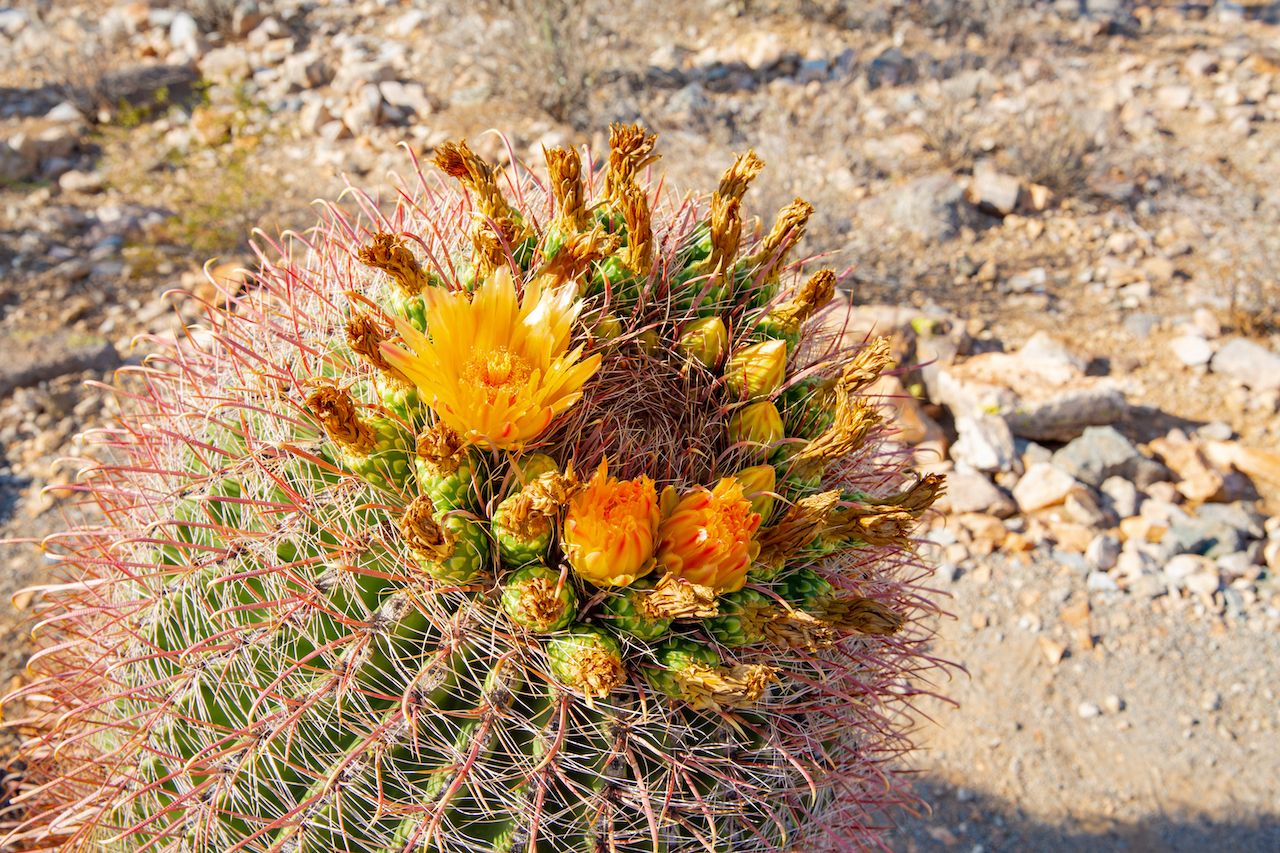 People have been known to use the fishhook barrel cactus as a source of water in emergency situations (although it can create stomach issues, so this practice is for emergencies only). The flower, seeds, and the fruit were traditionally used in cooking by local Indigenous people. 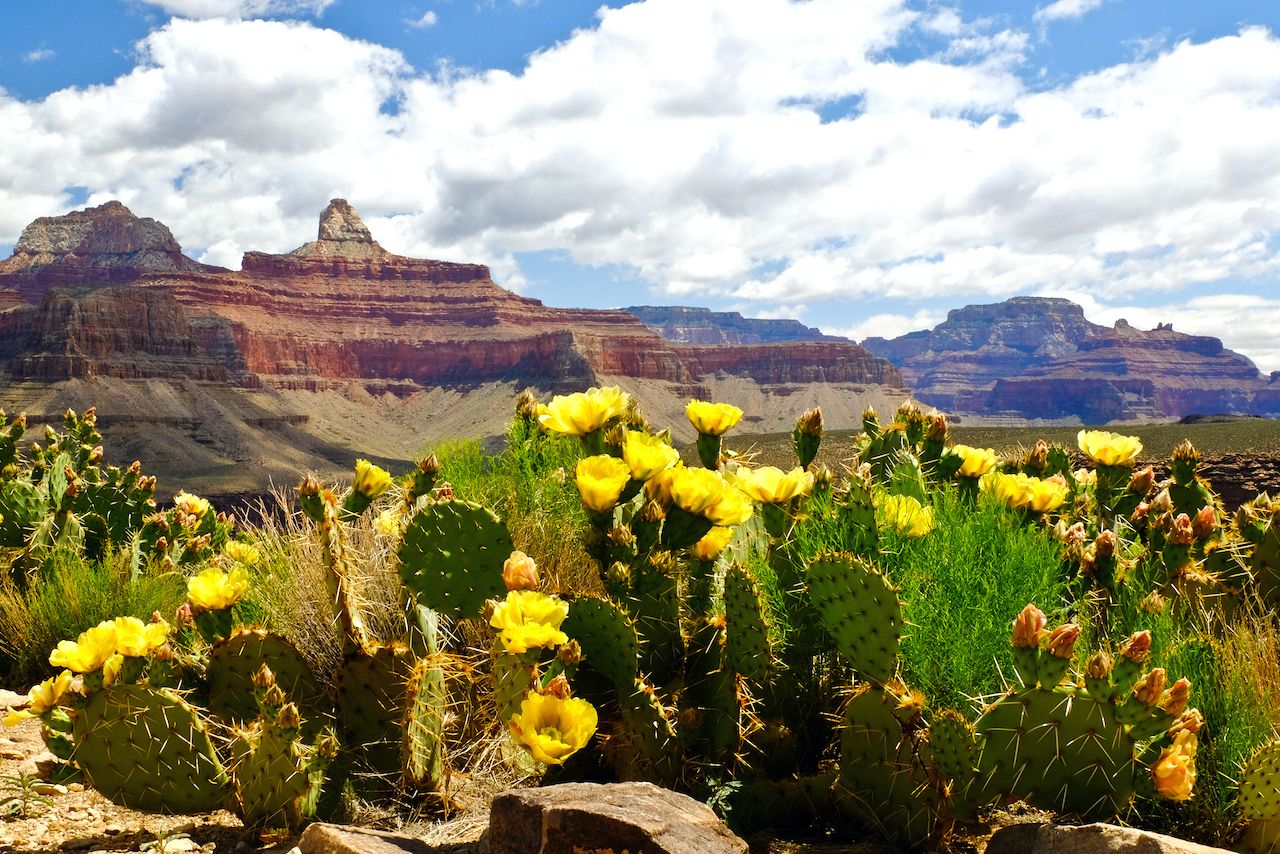 Prickly pear cactuses are extremely common throughout the US, with almost 40 species in the country. The engelmann prickly pear cactus, however, grows only in the Southwest with a range from central Texas through inland southern California. 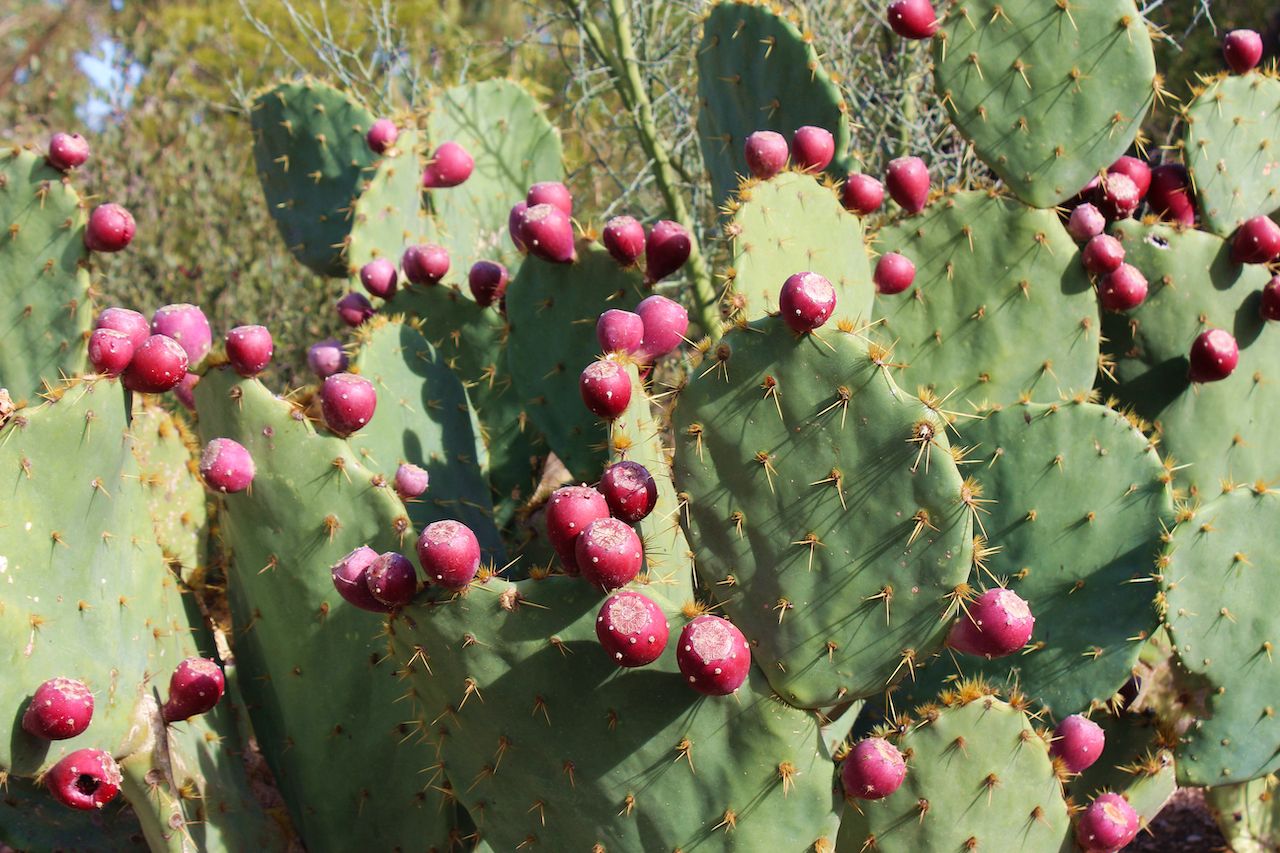 The engelmann has large, flat, rounded pads, and distinguishes itself from other prickly pear species thanks to its white spines, its yellow flowers that bloom in May and June, and the bright fruit (known as “tuna”) that follow. The engelmann can grow up to five feet tall and 10 to 15 feet wide.

The young pads can be eaten once the spines are removed and so can the fruit, but the raw seeds can lead to stomach issues.