Nanaimo, British Columbia, should be on the top of your list of places to visit, and not just because it hosts the World Bathtub Racing Championships every year. Located on the eastern edge of Vancouver Island, this city in Canada is home to the country’s favorite dessert: the eponymous Nanaimo Bar.

The original version of this classic no-bake Canadian treat has three distinct and delicious layers. The bottom is a crumbly coconut graham crust, the middle is a smooth and creamy custard filling, and the top is a layer of rich chocolate ganache. Over the years, this rich, chocolatey treat has captured Canadian hearts and inspired an ever-growing list of sweet spin-offs trying to imitate the taste, including Nanaimo bar Martinis, ice cream, and a craft beer from nearby Vancouver Island Brewing.

It’s hard to place exactly when the Nanaimo bar took over Canada. There are a variety of origin stories, ranging from early Dutch settlers to the wives of coal miners who cooked up the treat in the 1850s when the city was still known as Colville. Regardless of its origins, the city of Nanaimo boasts the title of being the bar’s birthplace. After all, as the city puts it on the website, “Of course, we know that Nanaimo bars originated in Nanaimo, otherwise they would be called New York Bars, or New Brunswick Bars.” 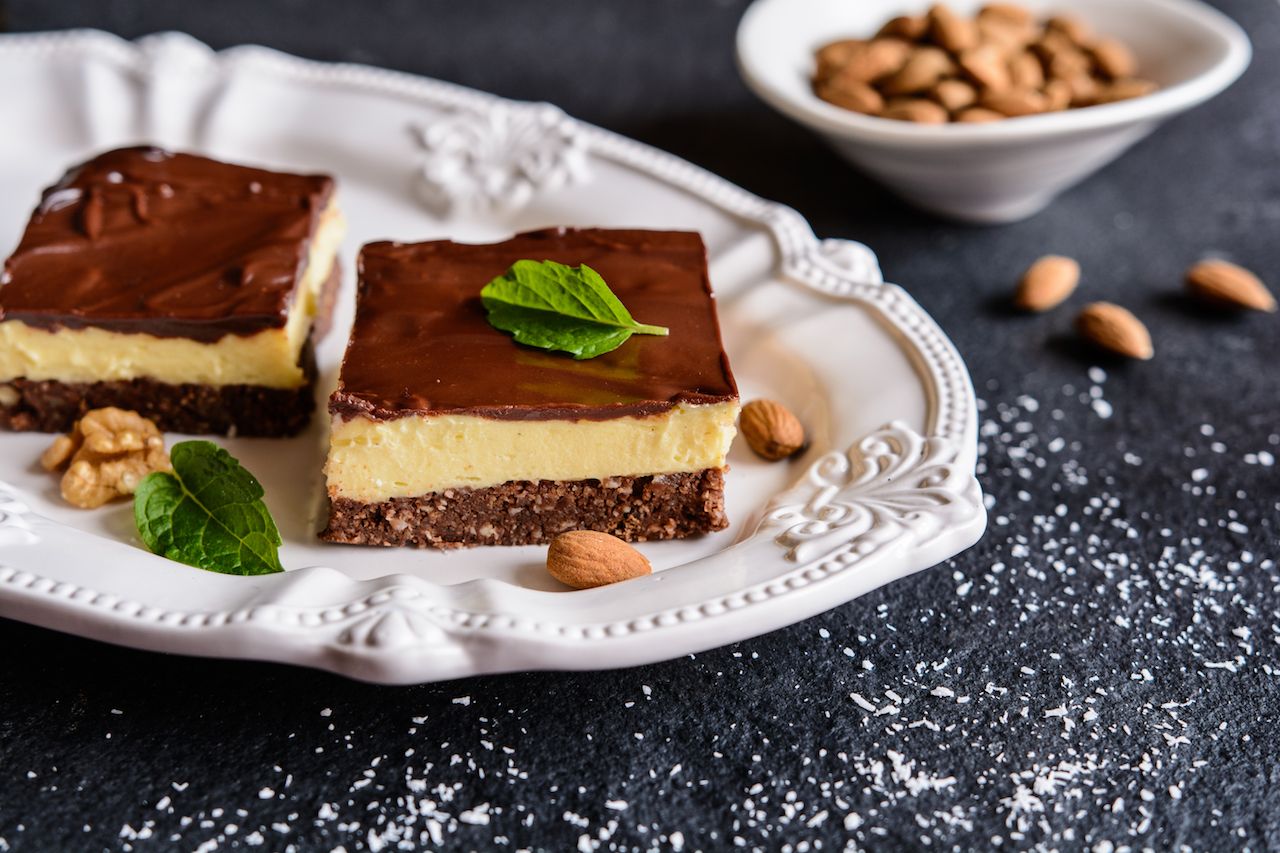 According to the Nanaimo Museum, the first known recipe for the bar was published as part of a local fundraising effort in the 1952 edition of the Women’s Auxiliary Nanaimo Hospital Cookbook. At the time, however, the bar was given the simple, unassuming name of Chocolate Square. One year later, in 1953, a similar recipe appeared in Edith Adam’s Cookbook. This time, it was given the name that it’s known for today.

By the 1980s, Nanaimo Bars had become a local sensation. So much so that the city’s mayor hosted a contest in 1986 to find the all-time-best Nanaimo bar recipe. The contest took place over four weeks, and more than 100 variations were submitted. The judges went through a tasting session that was no doubt delicious but also a little arduous. But there can only be one best Nanaimo Bar. A local woman named Joyce Hardcastle made that best Nanaimo bar for the contest, and her recipe became the official version (she later told the Food Network that the secret is unsalted butter).

Despite the contest, it’s hard to settle for a single Nanaimo Bar recipe today. The treat is served around the city, with everything from deep-fried to cupcake-ified versions sitting alongside the classic. You don’t have to try one and be done with it. The Nanaimo Tourist Board offers visitors the opportunity to make up their own mind about where to find the best Nanaimo Bar in the region through a self-guided tour along the official Nanaimo Bar Trail. The route has 39 different places throughout the City of Nanaimo and the surrounding area.

These are the essential stops to make on the trail. Be sure to pack a pair of your stretchiest pants. 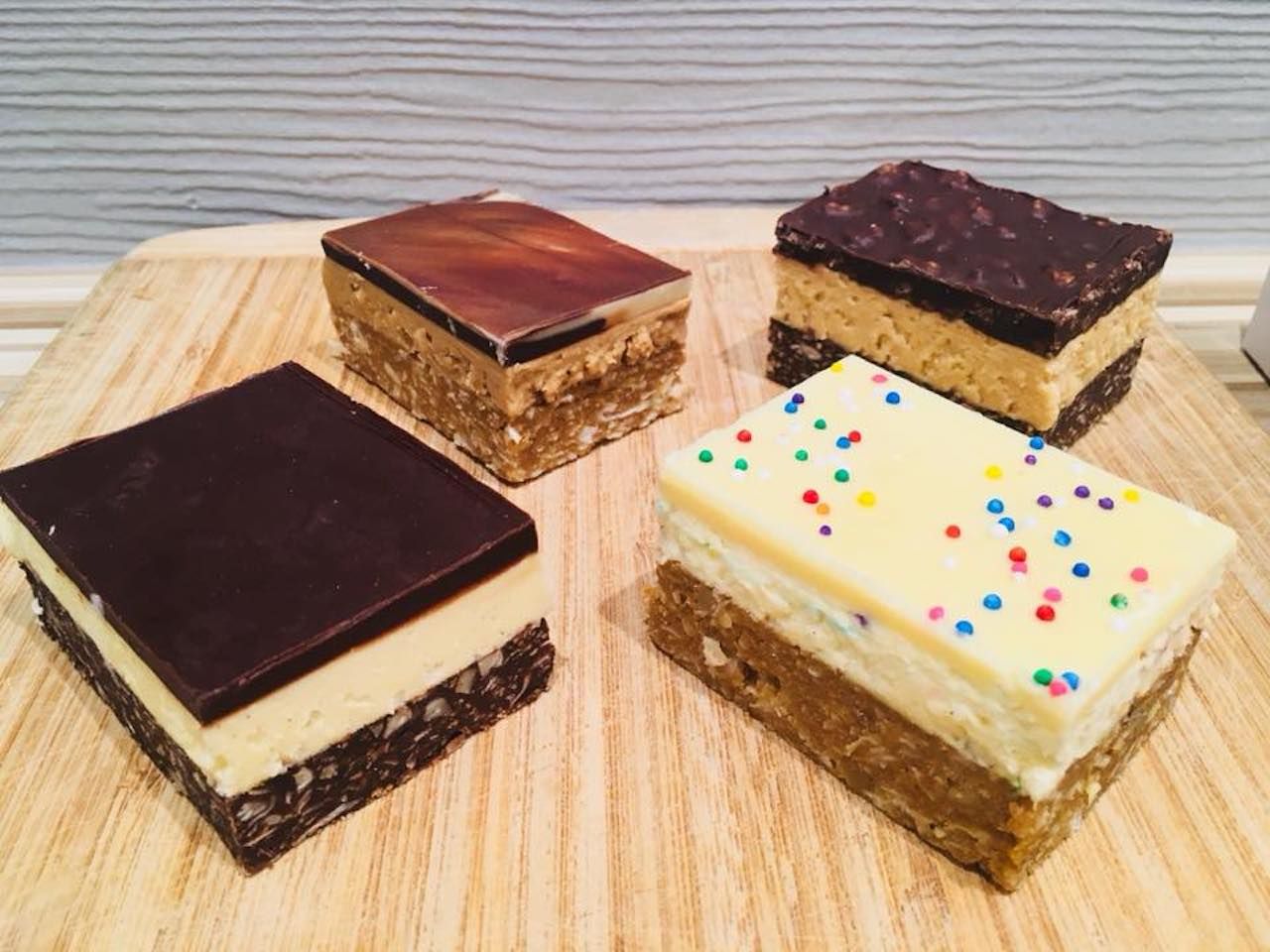 Hearthstone Artisan Bakery: This bakery opened in late 2015 and has been making top-quality baked goods ever since. Hearthstone uses locally milled and sourced products, and everything is baked in-house. This includes the famous Nanaimo Bars, which have even been featured on Canada’s Food Network. There are always three versions of the sweet delights on their menu: Classic, Peanut Butter Crunch, and a rotating monthly feature. Some of the monthly flavors have included cappuccino, raspberry white chocolate, milk chocolate mini egg, pumpkin spice, and candy cane. In 2018, Hearthstone was voted by local residents as one of the top places in the city to devour a Nanaimo bar.

A Wee Cupcakery: Nanaimo’s first and only artisan cupcake bakery is located in the Old City Quarter, and it specializes in a classic bar. Amidst the array of beautifully designed cupcakes, donuts, and macarons, you can find the tastiest version of the classic Nanaimo Bar at this shop. 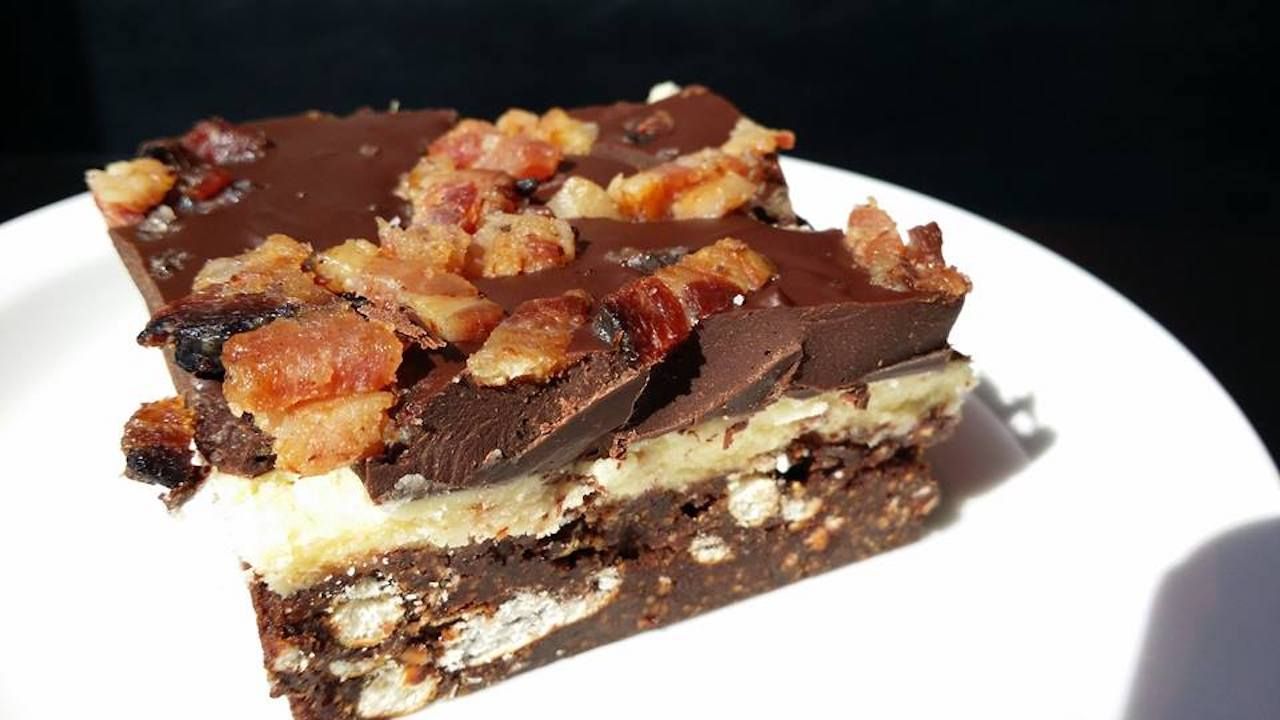 Smokin’ George’s BBQ Restaurant: At first glance, this popular local BBQ joint might not seem like a place to indulge in the city’s famous sweets, but Smokin’ George’s BBQ offers far more than meat smothered in homemade sauces and freshly baked cornbread. Located in downtown Nanaimo, there’s always a new dessert creation on the menu, including Bacon Topped Nanaimo Bars or a Dulce de Leche version. Like Hearthstone, Smokin’ George’s was also voted by city residents as one of the top places to try a Nanaimo Bar.

Modern Cafe: Open since 1946, Modern Cafe is located in the downtown core of Nanaimo. Look for the neon sign that adorns the entrance. Inside, you’ll find a casual atmosphere and a selection of choices for breakfast, lunch, and dinner. But, if you’re dedicated to diversifying your tasting experience on the Nanaimo Bar trail, you won’t want to miss the famous Nanaimo Bartinis.