Families dressed in their Sunday best pop Champagne beside cars speckled with pom-poms. Outsiders would think a wedding is taking place. Until a white-robed priest — dodging firecrackers — starts to fling water from plastic flowers under the car’s hood.

In Copacabana, Bolivia, this dance of pyrotechnics and holy men is part of a weekly tradition. The town is a hot spot for an uncommon Catholic ritual: car blessings.

In a highway pilgrimage, thousands drive into Copacabana to drive out blessed every year. Some road trip from as far as Columbia or Brazil in hopes of gaining a bit of divine car insurance in this town known for miracles. 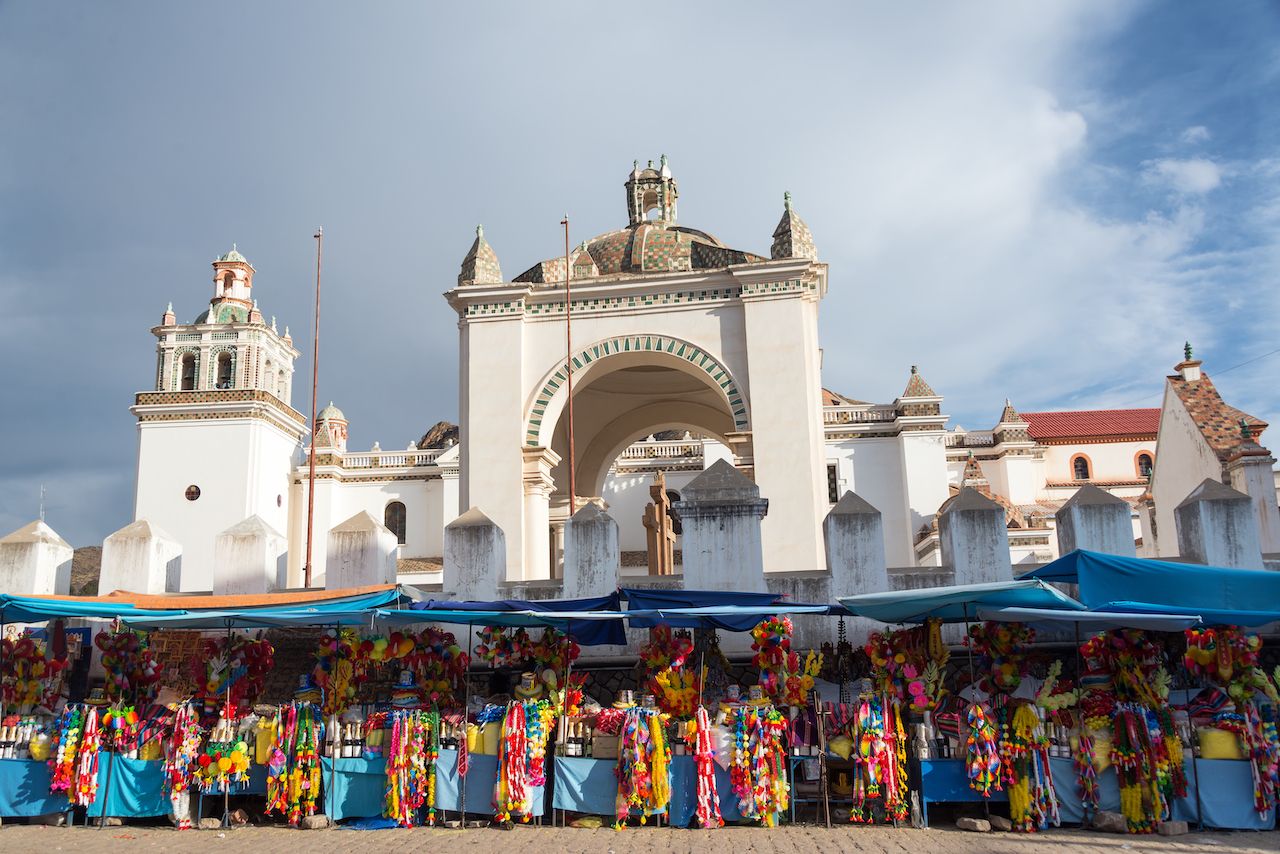 On any given weekend, and sometimes weekdays, the smell of sulfur hangs in the air in Copacabana’s Plaza 2 de Febrero. Lines of cars wait their turn to be blessed in front of the glowing white walls of the Basílica de la Virgen de Copacabana.

Tents selling a rainbow of frilly decorations encircle the scene — car-sized rosaries, streamers, fresh and plastic flowers, pinwheels, and even sparkling novelty hats, dance in the breeze. If anyone forgot to dress their car for church, they can adorn their vehicle on arrival.

At the front of the line, a priest in white vestment and a brown-robed monk move from car to car, and family to family. A donation of up to 200 Bolivianos, around $30, is typically given for the blessing.

The priest’s hand raises up, down, left, then right, crossing the air in front of a car as he murmurs a prayer under his breath. Next, he dunks plastic flowers into a bucket of holy water and flicks it onto outstretched hands holding the car keys.

Car owners pop open the hood and doors, and the priest begins dousing the engine and upholstery.

Eyes scrunch and children run for cover as the priest casts a few spare drops onto the heads of drivers, passengers, and even spectators so that everyone — not just the cars — leaves the ceremony a little holier. 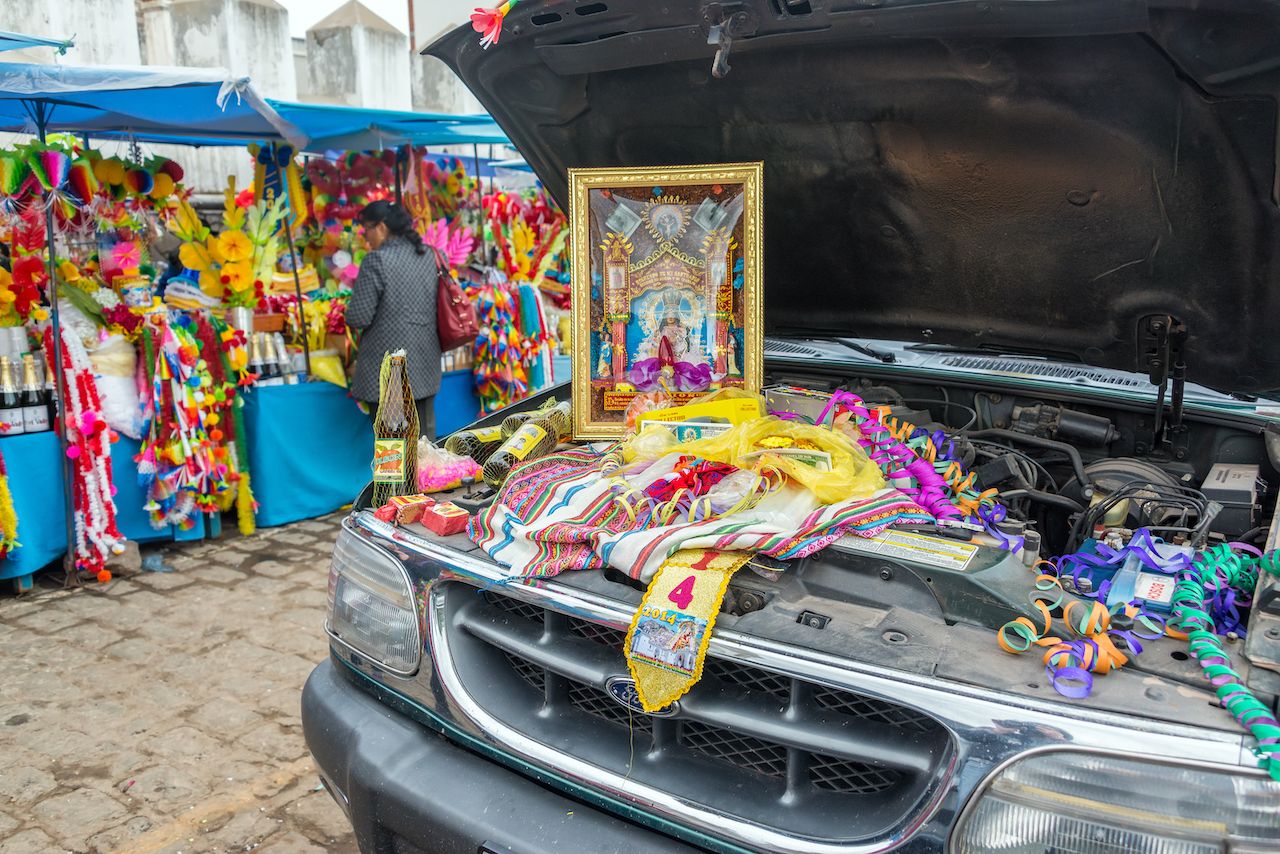 The family shakes hands with the priest and monk in gratitude. Then, laughter erupts as they pop open a bottle of sparkling wine, beer, or cola (depending on their tastes and budget) and run around spraying the vehicle’s exterior — and anyone nearby — in celebration.

This act is an offering to Pachamama, the Mother Earth goddess, and a local indigenous tradition. Yellow confetti or flower petals are flung atop the car and stick to the liquid. Yellow is also a significant color to locals, representing their sun god and nearby Isla del Sol, Island of the Sun.

The blessing ends with a big bang. A lit string of firecrackers is tossed under the car. Tiny explosions scuttle out in all directions. Children, grandmothers, and even the priest hustle out of the way.

With their cars blessed, the pilgrims can drive home feeling safer behind the wheel. 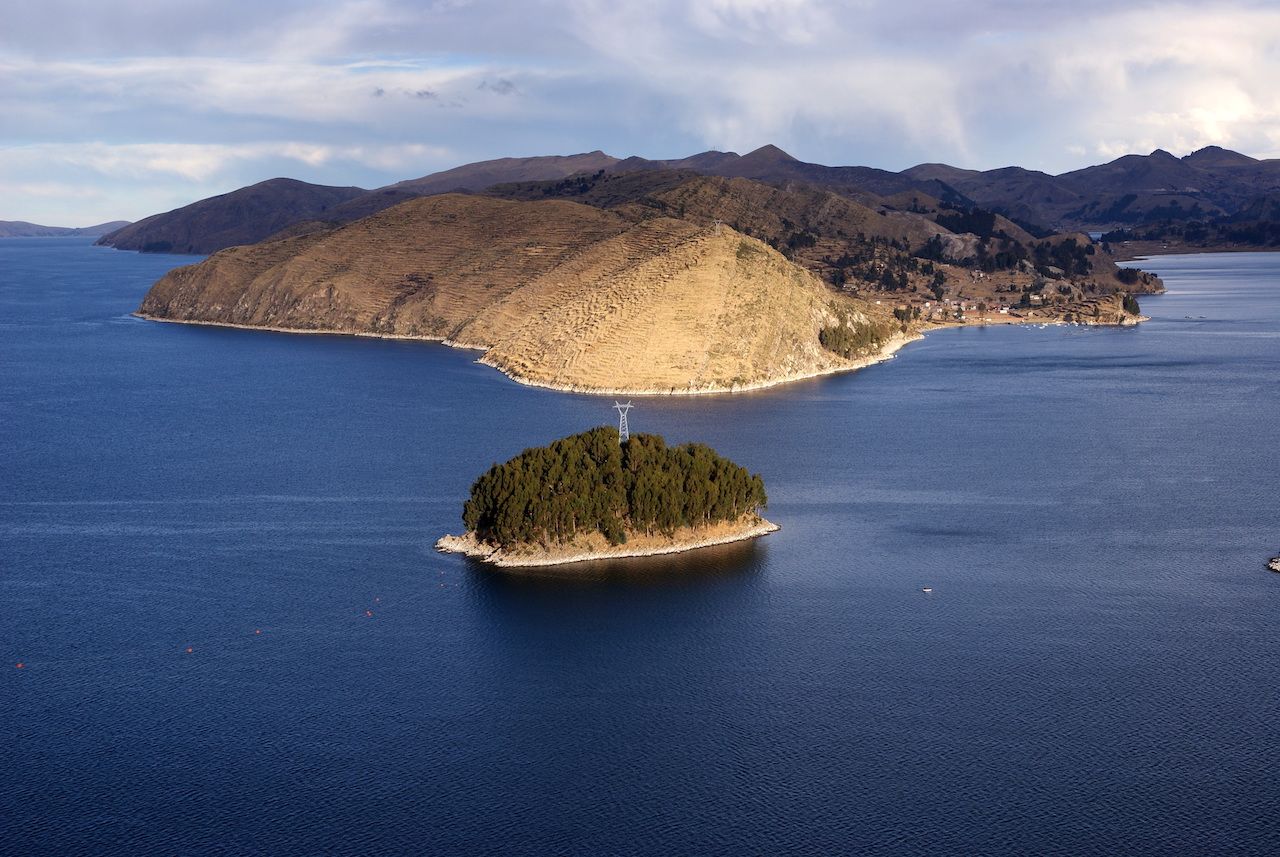 Car blessings first appeared in the 1964 edition of Rituale Romanum, the journal of Catholic rituals, and nowhere else are they as frequently practiced.

Yet, Copacabana was a holy destination long before the basilica or blessings arrived. Its location on Lake Titicaca overlooks Isla del Sol, which is revered by local indigenous communities as the place where their sun god and the first two humans emerged.

Ancient pilgrims established holy shrines here to make offerings to the sun god, as well as their fertility goddess, Pachamama. The Catholic Basilica was built purposefully on top of them as early missionaries tried to banish local religions. But, in Bolivia, the two spiritual beliefs blended into unique traditions and parts of the shrines were preserved inside and around the church.

The statue of Bolivia’s patron saint, Our Lady of Copacabana, is another example of the unique mix of traditions; she wears the robes of an Inca princess and was carved by a Quechua (Inca) artist. Her supposed miracles incorporate those of the ancient local gods, and she serves as a protector for travelers and children. One time, Brazilian sailors who visited her statue later claimed to be saved by her presence during a storm at sea. In honor of this miracle, Copacabana Beach in Rio de Janeiro, Brazil, got its name.

A quick note to clear up any confusion and hopefully get the song out of your head: While often confused with Barry Manilow’s “hottest spot north of Havana,” Bolivia is home to the original Copacabana. The word means “place near the water” in the indigenous Aymara language for the town’s location on Lake Titicaca. The New York nightclub that inspired Manilow’s show tune was actually named after Brazil’s famous party beach.

Blessings are held every weekend. During major Catholic holidays, hundreds of people participate, and their colorful cars span blocks.

Copacabana is a tourist hub for travelers to Lake Titicaca and Peru, so you don’t have to worry about traveling too far out of the way of major sites to visit. While you may not have your own car with you all the way down in South America, the festivities are still a sight worth seeing. And if you are planning on road tripping around these countries in a questionable rental car, a visit to the holy men of Copacabana may be the best place to start.

National ParksBolivia Has the Most Epic Landscapes You’ve Never Heard Of
Tagged
Festivals Religion
What did you think of this story?
Meh
Good
Awesome