Not to take anything away from the traditional road trip, but there’s more than one way to move down the road. In July, I took my first road trip of the summer — actually, my first since the pandemic hit the US — from my home in Colorado’s Grand Valley to Aspen. In a car, the drive would have taken about two hours each way. But I was intent on completing a “zero added emissions” trip that would combine the Bustang, an inter-city bus service, with my mountain bike. I’d be using my bike to explore the trails of Aspen and nearby Snowmass, the reason for my journey in the first place.

The plan for a zero added emissions trip is straightforward: Get from point A to point B without adding any carbon emissions that weren’t already going to be emitted by transport or by creating food waste or other toxic trash in excess of what I would on a normal day at home. Travel by bus fits this description; it would be making its way from Grand Junction to Denver regardless of whether or not I was on it.

I would hitch my Kona mountain bike onto the front of the bus, a service of the Colorado Department of Transportation, and ride to Glenwood Springs, 86 miles from Grand Junction. Then, I would bike the Rio Grande Trail — a 42-mile line from Glenwood Springs to Aspen — to El Jebel, where I would hop the bus to Snowmass Village. After three days of biking the upper Roaring Fork Valley, I would head out on the Rio Grande Trail from its southern terminus in Aspen and ride back to El Jebel before hopping the bus to Glenwood. In between, I’d overnight at the Limelight Snowmass and spend two days exploring both cross-country and downhill mountain bike trails.

Part bikepacking expedition, part stodgy resort vacation. True adventure travel. A trip where I’d rely on my own power and logistical abilities to complete an experience I’d never done before — and wasn’t 100 percent sure I could pull off. What I was sure of was that after the past five months, I needed a dose of adventure.

How coach bus services are adapting in the era of COVID 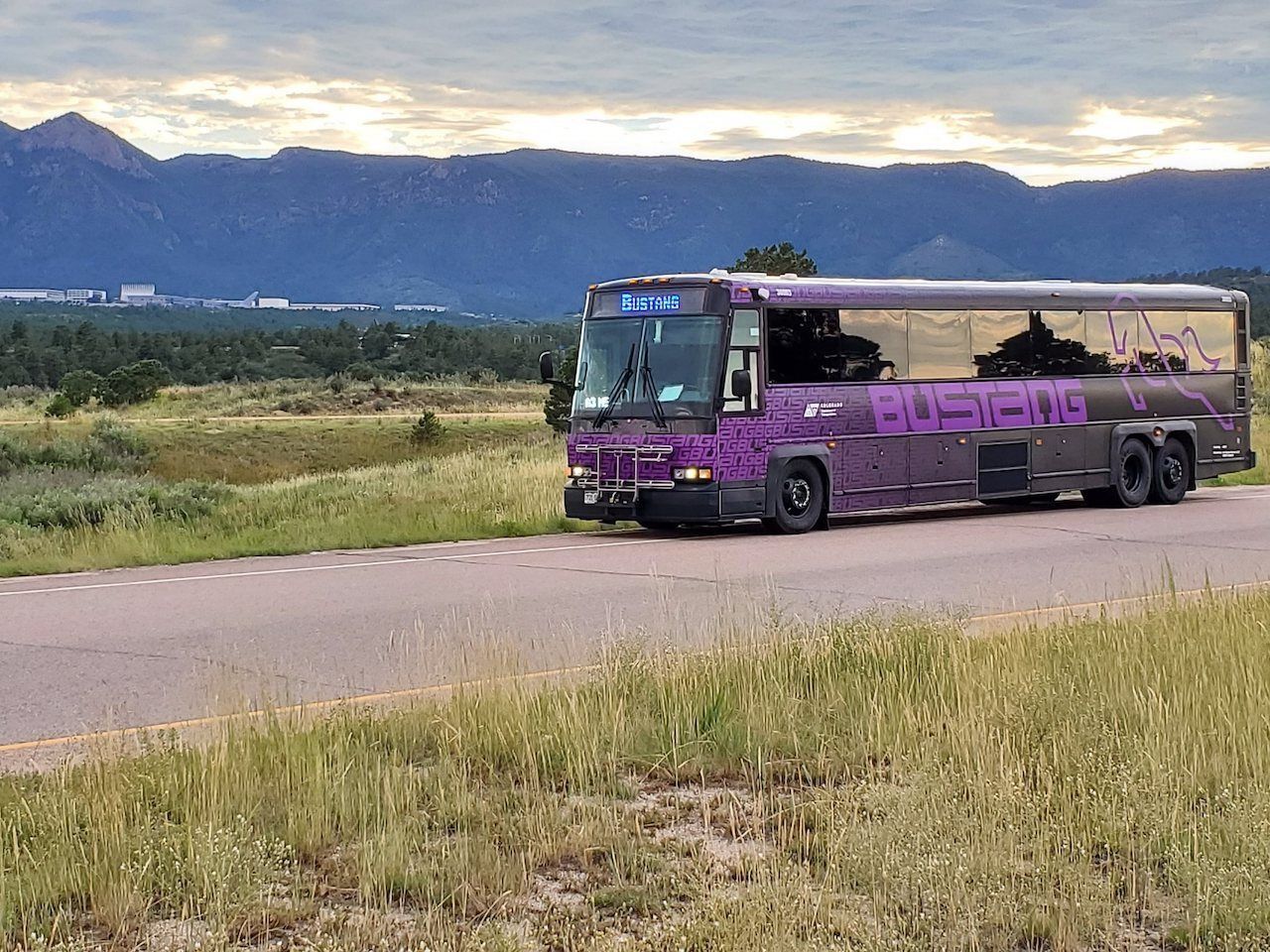 Of course, I had my reservations about hopping onto a crowded public bus during the outbreak. The Bustang had actually suspended service on March 29 as a statewide shutdown order enveloped Colorado and public fear of enclosed spaces reached its peak. Service resumed three months later on June 28 with COVID-era safety protocols in place. The CDOT website assured it was safe to ride, with face coverings required at all times and a 22-person maximum capacity enforced through reserved seating (unavailable before the cease in service) to ensure no two passengers were seated next to one another.

“We have carefully monitored when to safely resume serving our Bustang and Outrider customers and are doing so now, with significant precautions in place that follow guidance and best practices from public health officials,” said Colorado Department of Transportation Executive Director Shoshana Lew in a press release.

Somewhat skeptical but needing to get to Snowmass sans car, I bought a ticket online for the following Monday. Packing for the trip was uncomplicated. I had a Fernweh backpack from Wandrd, a bag that is specifically designed for outdoor adventures by those with a penchant for media production. Inside was three days’ worth of mostly outdoor-ready clothing, with one nice shirt and pair of pants mixed in for dinners out — “mountain casual” at its finest. I also had my work setup of a laptop, charger, notebook, and a Canon DSLR camera, which along with an extra lens fit nicely into the bag’s camera pack. And finally, a safety bag including bandages, a tire repair kit and pump, and a bivy sack I carry with me in case I somehow find myself stranded overnight.

On the morning of my ride I lugged my mountain bike and pack down to the Grand Junction bus station. Before being allowed to board, the driver checked my temperature and that of the other boarding passengers. I passed, as did the other six or seven others, an encouraging start on both accounts.

If you’ve ever loaded a bicycle onto the rack of a city bus, you know the anxiety this causes. What happens if the bike comes loose? Or in the case of an accident where the bus rear-ends a vehicle in front of it?

My fears were amplified knowing that we’d be hurtling down Interstate 70 at 65 miles per hour. At least it’s not windy today, I thought as I tightened my bike into the holster on the front of the bus. 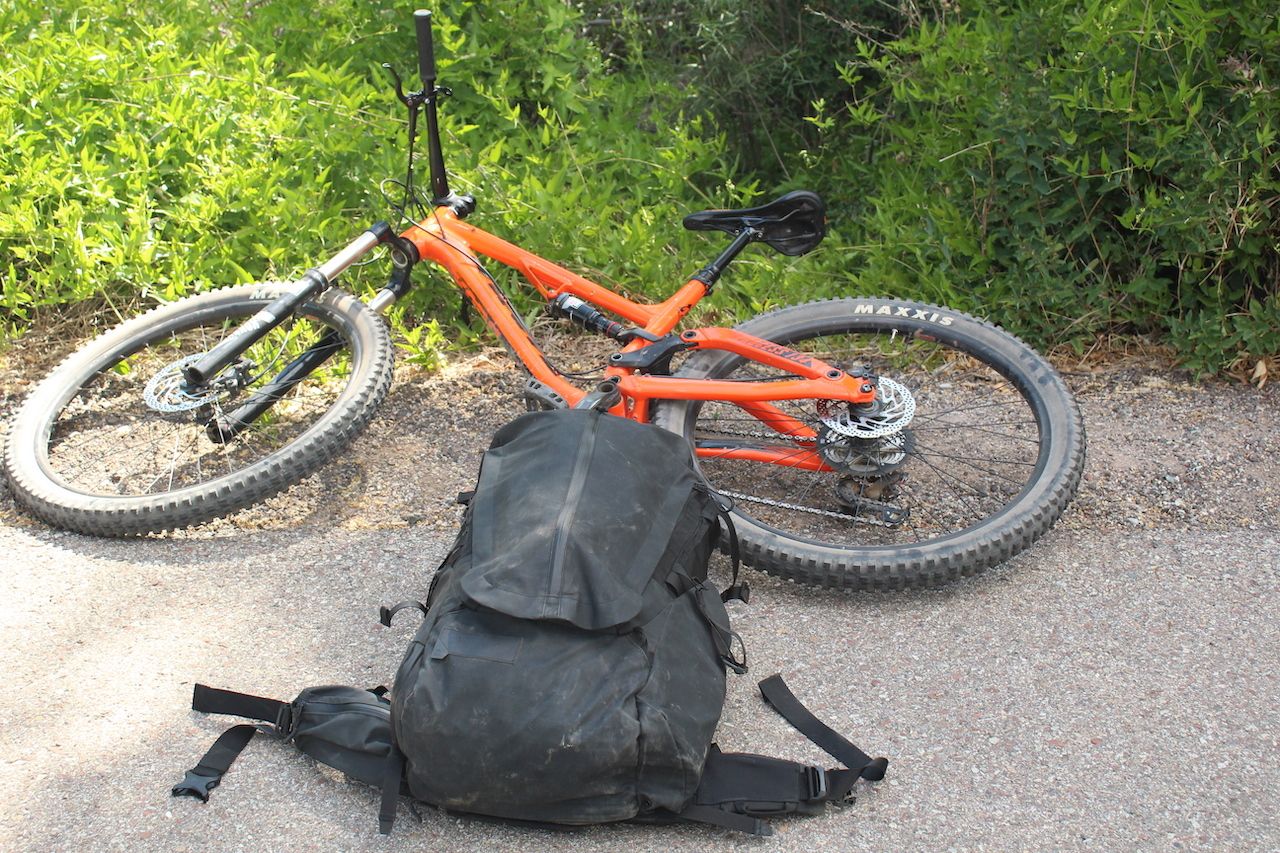 Colorado is lucky to have the Bustang service, which debuted in 2015 to ease highway congestion along the state’s crowded Front Range that includes Denver, Boulder, and Fort Collins. It has since expanded across the state, including the W Line I was about to embark on, which services the mountain corridor and ski areas along Interstate 70.

Not all states have something like this. I’d looked into other coach bus providers using the site Comparabus, which breaks down service across the US and links to ticketing options, and had also looked into taking Greyhound in the case that the Bustang sold out. As it turned out, I’d take the Greyhound across Colorado a couple of weeks later. Though that bus was nearly full, the company is adamant about face coverings and cleaning procedures, at one point disembarking all passengers for a scheduled cleaning.

“As we continue to provide vital transportation nationwide, it is important that we continue to make temporary, yet necessary, changes to our policies in order to create a safe environment for all our customers and team members,” Greyhound CEO Dave Leach says in a recent press release. 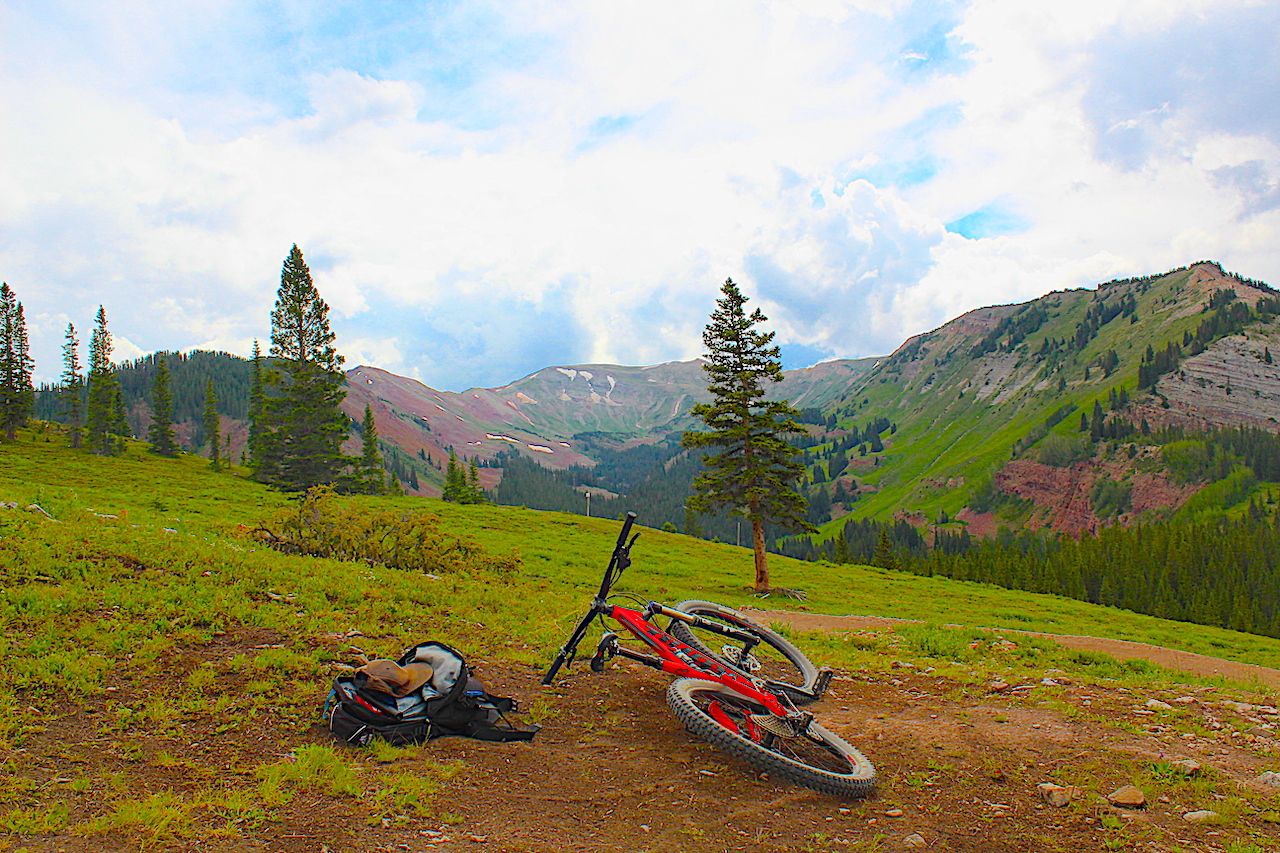 After disembarking from the Bustang at the station in Glenwood Springs, I headed out on the 22-mile ride to the El Jebel Park and Ride station, where I’d board a bus for the final 20-minute commute to my hotel. It is possible to ride the entire way, but I’d decided to break the long haul into two parts due to my heavy pack and the fact that this portion of the ride was slightly uphill — not steep, but noticeably not flat, either.

“Keep your eyes open for the bear,” a rider heading the opposite direction told me a few miles outside of Glenwood. A few minutes later I thought I’d heard it, but that’s the genius of paranoia — it can manifest itself into your keenest of senses. 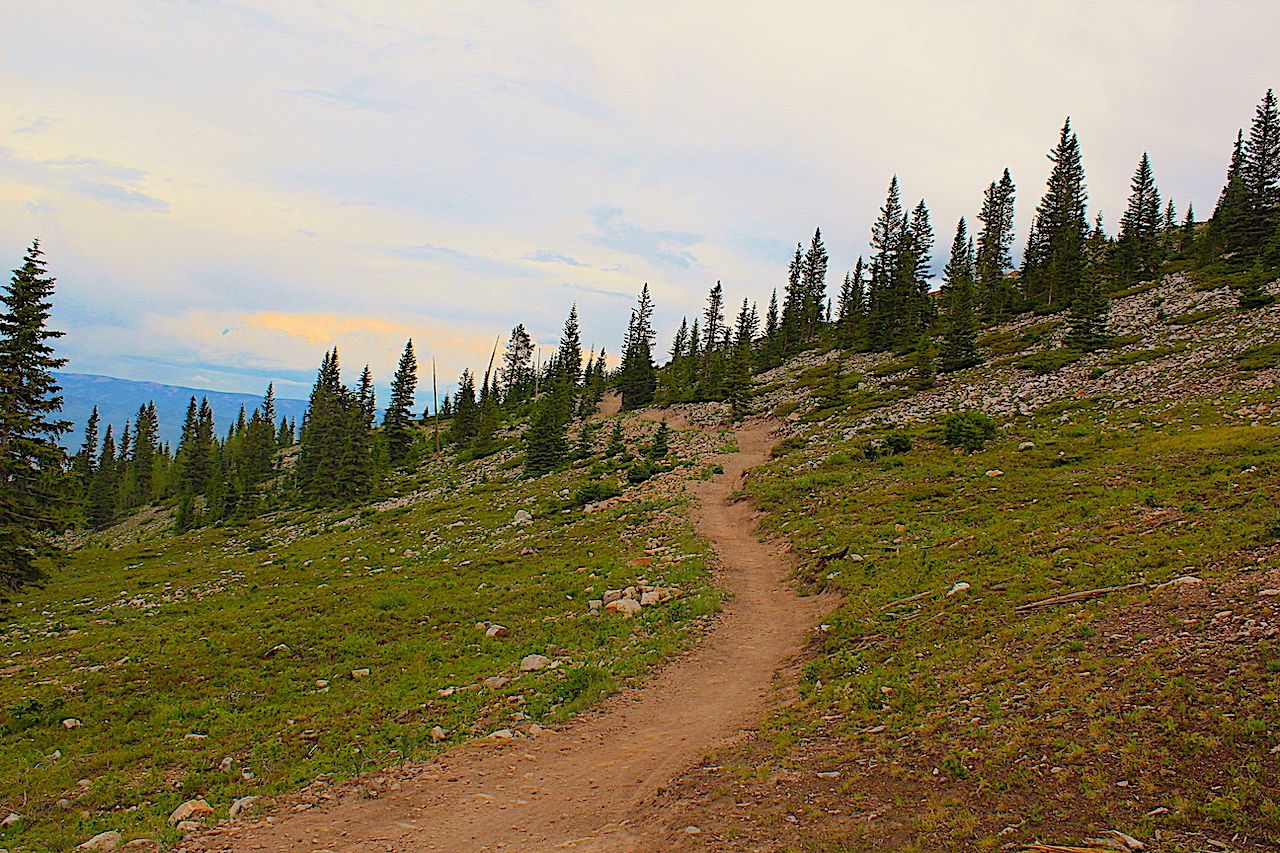 The paved trail began along the Roaring Fork River, a peaceful stretch of riding where I was shaded from the beating sun above by Engelmann spruce and aspen trees. As my fear of an unplanned bear encounter faded I pedaled through the town of Carbondale, where the trail passes through a stretch known as the ARTway. Here, public art structures large and small line the path, many designed by local schoolchildren. I sweated and struggled through a long straightaway before finally pulling off the trail in El Jebel and winding through town to the bus stop.

In the morning, I loaded my bike onto the Roaring Fork Transit Authority bus outside my hotel and departed to the Tiehack trailhead at the base of Buttermilk Mountain. The RFTA (pronounced “rafta”) dropped me off a five-minute ride from the trailhead and had waved all fares due to the COVID crisis, an unfortunate occurrence but one which made getting around the Aspen Snowmass area a breeze. The return trip to the hotel and subsequent travel in and around the area were just as easy. All passengers wore a mask and sat at least two seats apart. 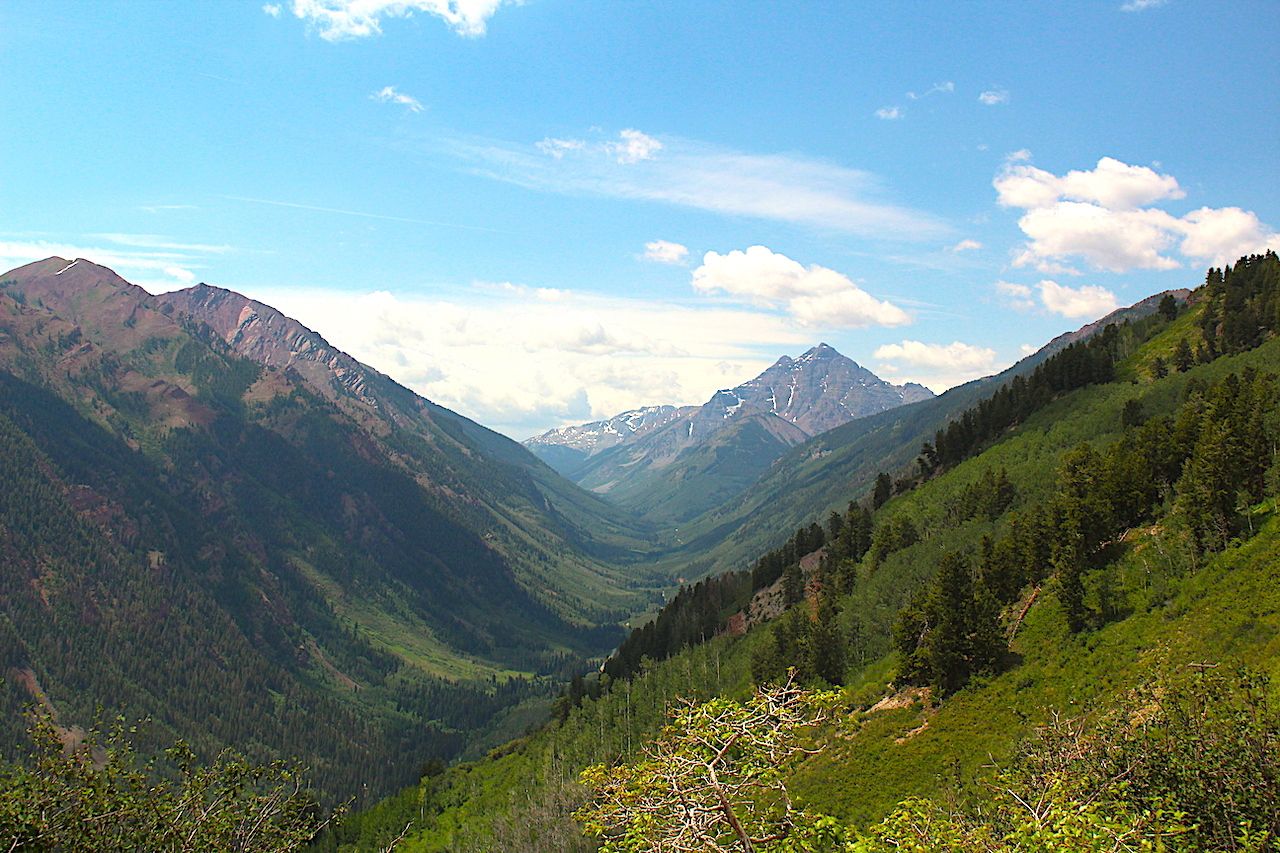 Forty-eight hours later I was sipping water at the Aspen entrance to the Rio Grande Trail. A quick but impactful afternoon rainstorm had just ceased, promising a cool but damp 23-mile ride back to El Jebel. Because of the moisture, I opted for the paved section of trail where available, though some stretches are pebbled.

The ride was easy on this end. I passed through Woody Creek, most famous as the longtime residence of Hunter S. Thompson, and only once got sidetracked by making the wrong choice at an intersection of trails. (The only intersection along the route, I admit, but after four full days on the bike I’d apparently succumbed to being overconfident.) I pedaled into the El Jebel station, triumphant.

Hopping the bus to Glenwood Springs, where my wife would meet me for dinner and a night at the historic Hotel Denver, I calculated that I’d pedaled more than 100 miles in four days. This evening of relaxation was orchestrated in advance — we married at the Amtrak train station across the street in 2016 and have returned annually ever since — and seemed well-deserved. My legs needed a good rest.

CyclingAspen Snowmass Is Officially One of Best Mountain Bike Spots in the World
Tagged
Cycling Road Trips Sustainability Colorado, United States
What did you think of this story?
Meh
Good
Awesome