As the impacts of climate change increase, many people are looking for ways to cut back on their carbon footprint. And one of the biggest culprits on an individual level is transportation. The bulk of carbon emissions in the UK and the US come from transportation. But it can be unclear how to make the right choices depending on where and how you’re traveling.

The Visual Capitalist analyzed data from the UK Department for Business, Energy & Industrial Strategy, as well as Our World in Data, to find which types of transportation contributed the most grams of carbon dioxide per kilometer a passenger travels. 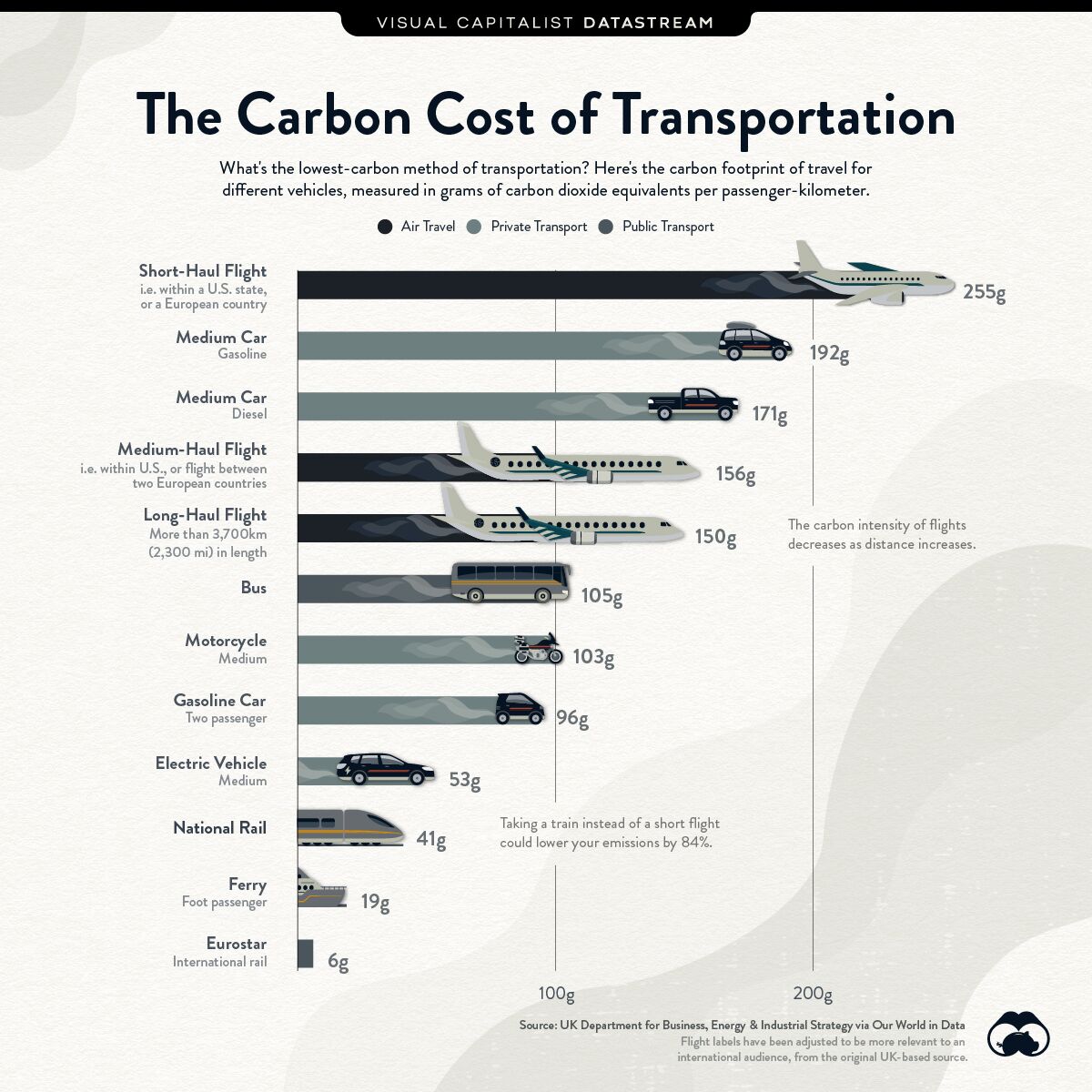 The breakdown of flying on a plane varies depending on where you’ve decided to fly. A short-haul flight adds up to 255 grams (.56 pounds), but as distance increases, the carbon density decreases. That means a medium-length flight, like one between different US states, adds up to 156 grams (.34 pounds), and a long haul flight of at least 2,300 mile uses 150 grams (.33 pounds). Short-haul flights are more intensive because take-off uses much more energy than when the plane starts to cruise, so the per-mile average of emissions goes down the longer a plane cruises. With sustainable aviation fuel (slowly) on the way, flights could become up to 80 percent cleaner.

Comparing cars, a medium-sized car spews out 192 grams (.42 pounds) per kilometer. That’s why carpooling is essential. When you carpool, the number is reduced to half when you include a second person, into thirds when you include a third person, and so forth. A diesel vehicle with only one passenger emits 171 grams (.37 pounds), and an electric vehicle has significantly reduced carbon footprint of just 53 grams (.11 pounds).

Trains fare way better than buses. Buses are responsible for 105 grams (.23 pounds) per passenger per kilometer, but national rail only creates 41 grams (.09 pounds), and Eurostar falls nearly flat with just six grams (.013 lbs). And with new train routes popping up in Europe, Africa, the US, and Asia, train travel will continue to become more accessible. Of course, walking, biking, and running beats all these options.

The news of climate change doesn’t have to be grim. And small changes can make you feel like you’re doing your part.

SustainabilityThe Best New Services for Planning a More Sustainable Trip in 2022
Tagged
Airports + Flying News Sustainability
What did you think of this story?
Meh
Good
Awesome