Staying at a wellness retreat is one of the best ways to vacation. Not only are you escaping the worries of daily life, and likely in a gorgeous locale, but you’re also eating healthier and exercising more than you would on, say, a vacation to a town defined by ice cream. But some of these wellness resorts can be a little crunchy. After all, we still want to indulge in flavorful meals and a poolside margarita after that sunrise yoga class. Civana, located in the town of Carefree, Arizona, mixes the best of both worlds.

Drive about 40 minutes north of Scottsdale and you’ll come across two small, neighboring towns: Carefree and Cave Creek. Carefree (whose name is, admittedly, a bit on the nose) is the relaxed, hippy desert locale while Cave Creek is the rebellious cowboy town with live bull riding and Coyote Ugly-style entertainment. Civana is situated in the former, but everyone will tell you to visit the latter for a good time. 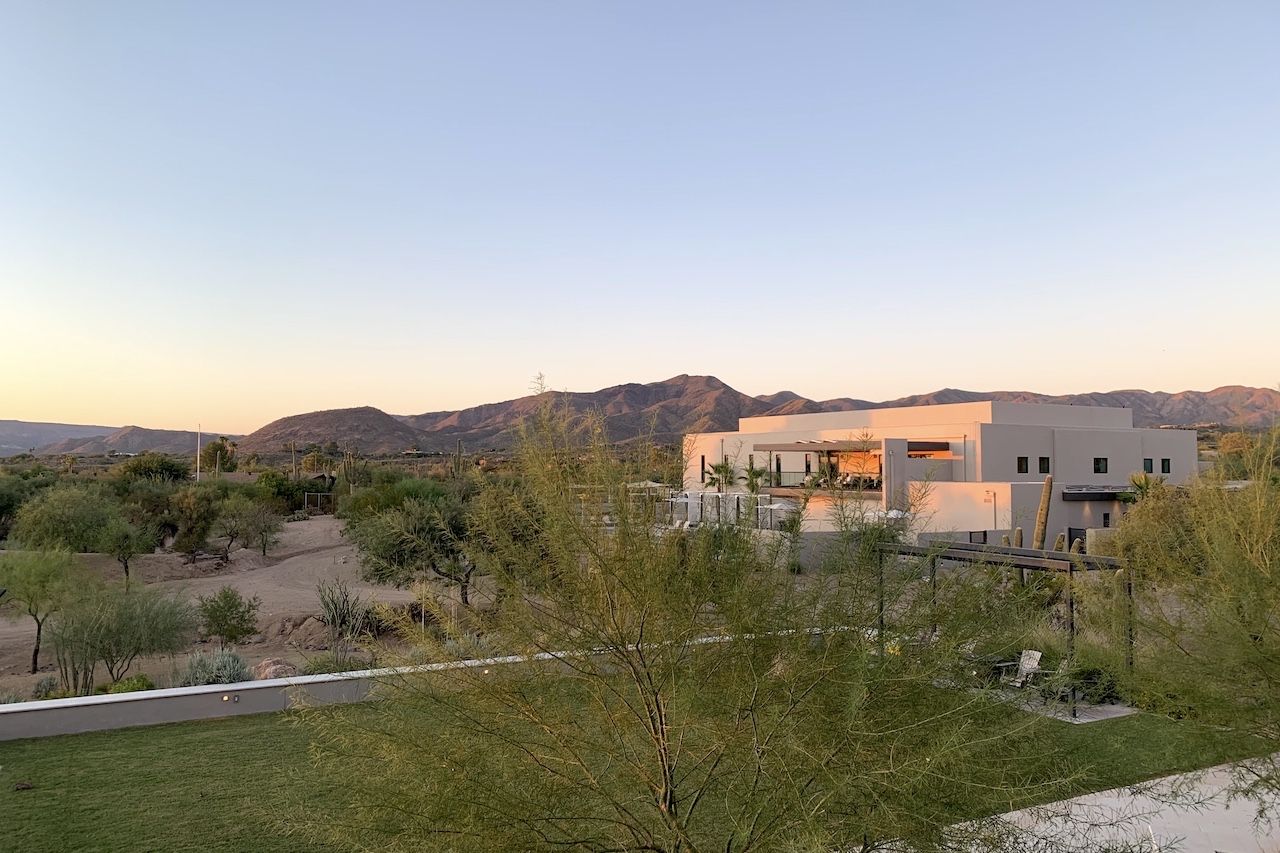 Carefree’s eight square miles are in the Sonoran Desert near the scenic Black Mountain, and the town is home to around 3,500 residents. What was originally built in the 1950s as the Carefree Resort & Conference Center underwent a $50 million renovation to become the sustainability-focused wellness resort Civana in early 2019. The restoration preserved its architectural integrity but made way for a clean, minimalist design that makes you feel relaxed the moment you step into the lobby.

Civana is a place where you can truly relax. While wearing your robe around common spaces easily comes off as gauche at most hotels, you’ll see Civana guests leisurely strolling from the pool to the spa to the juice bar in the plush white robes provided in every room. On my stay, I totally got into the spirit and proudly donned the terrycloth uniform while moving from a morning pilates class on the lawn to breakfast at the grab-and-go Cafe Meto. 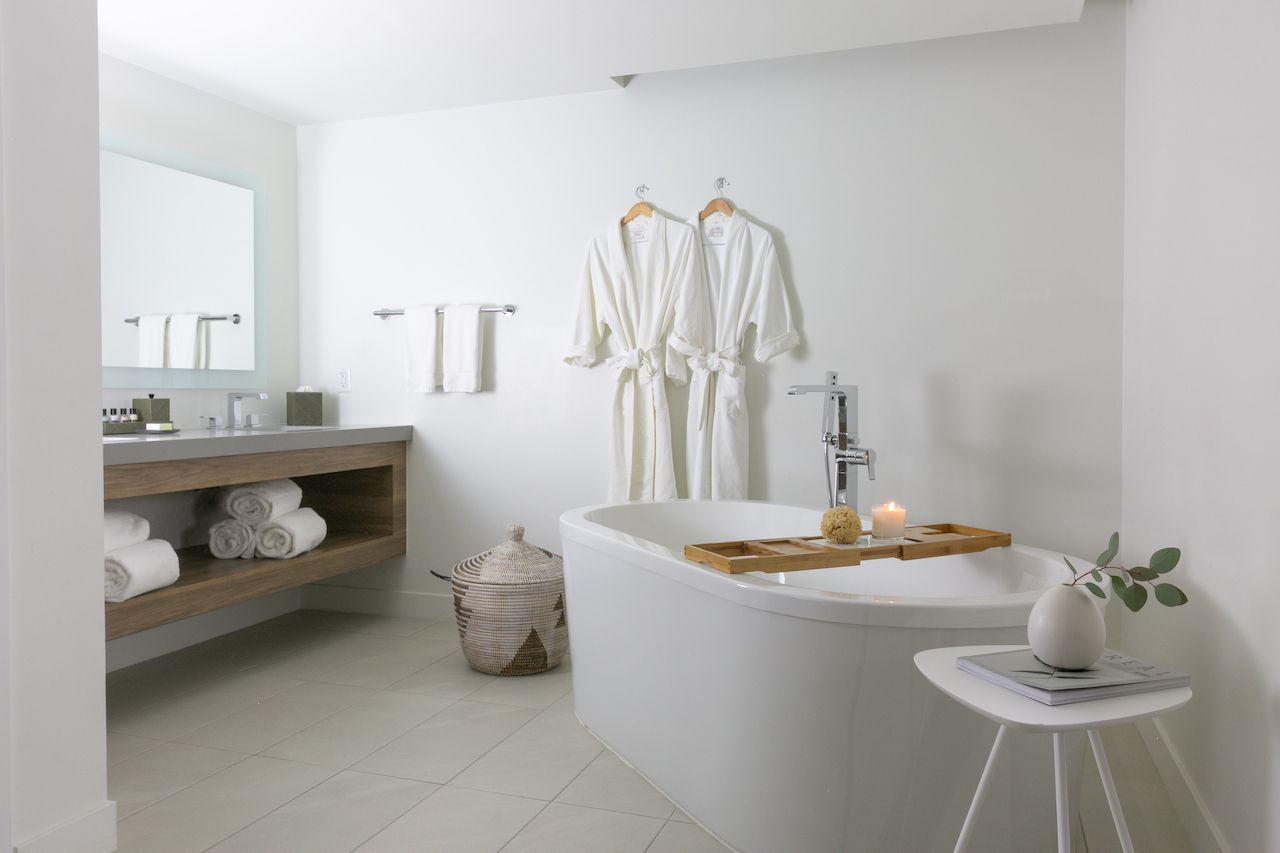 Many wellness resorts focus on vegan and raw cuisine, which is great in its own way. But Civana caters to everyone’s individual palate by offering everything from grassfed beef and sustainable seafood to vegan, vegetarian, and gluten-free options. At on-site restaurant Terras, executive chef Justin Macy spotlights local ingredients and bright flavors. We dined on rainbow heirloom beets, shitake mushroom and spinach stir fry, chili-rubbed carne asada, and a decadent vegan avocado chocolate mousse. The prickly pear that spiked our bright pink margaritas was picked from cacti on the property.

As we finished up dinner at Terras, we chatted with the Civana staff about where to go to explore town. One woman suggested we check out Carefree Coffee Roastery for the best beans in town while another talked up the English Rose Tea Room, an authentic toast to British tea traditions in the middle of the desert. But the one recommendation that just about every local gave us was The Buffalo Chip Saloon, a raucous bar and steakhouse in neighboring bad-boy town Cave Creek. 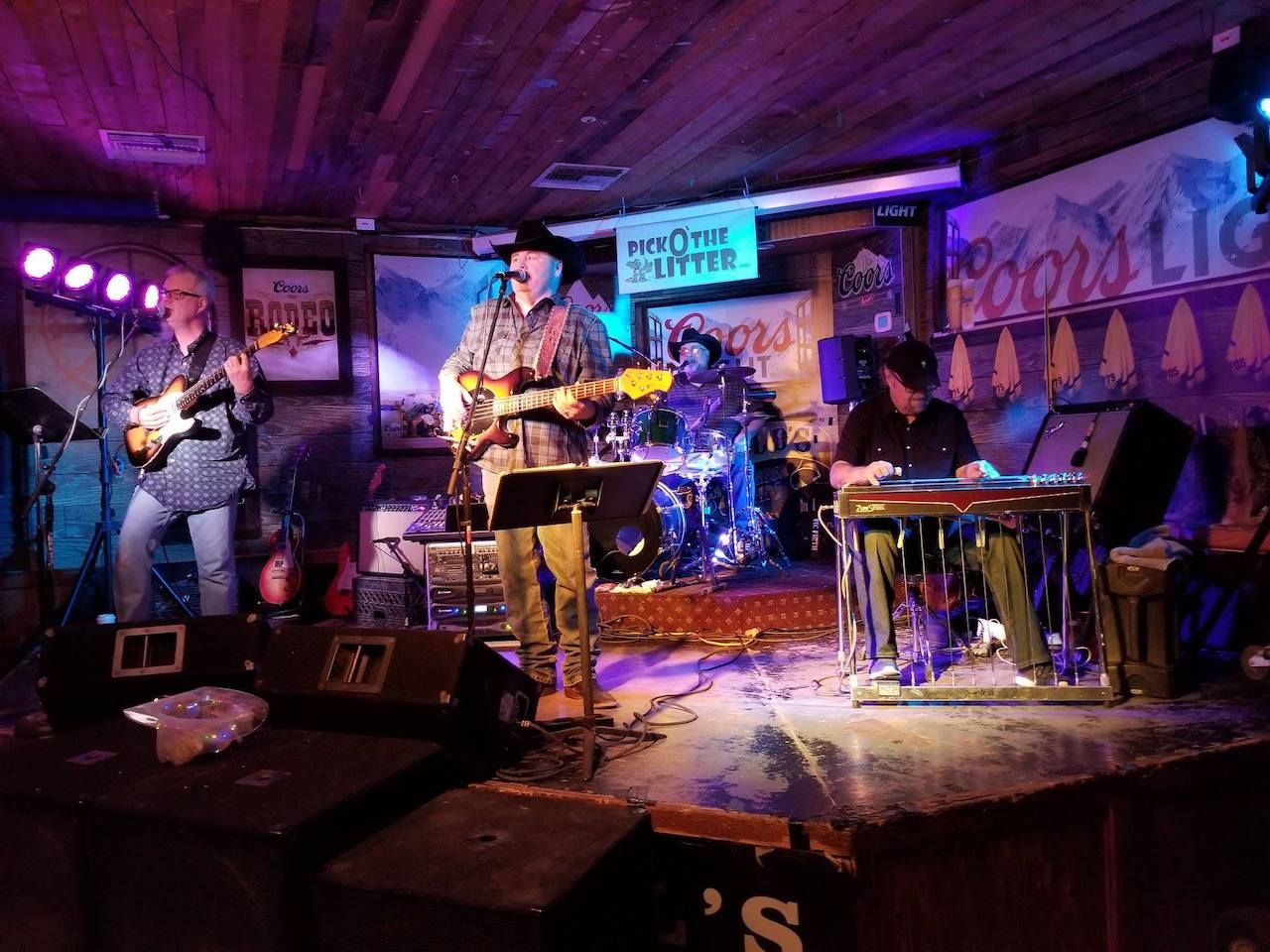 Built in 1951, Buffalo Chip was once a feed and bait shop for fishermen on the way to Arizona’s Bartlett and Horseshoe Lakes. It’s now the most popular watering hole in Cave Creek, serving barbecue, drinks, and entertainment to everyone from locals decked out in cowboy gear to tourists staying at one of the nearby resorts. On a recent Friday night, the massive space featured a live country rock band inside along with a second band outside that played in front of a huge dance floor where patrons were square dancing and strutting their stuff. In true Coyote Ugly fashion, five bartenders hopped onto the bar and danced in unison while two others sailed through the air on swings that hung on either end of the bar.

But the real draw of Friday night at Buffalo Chip is the live bull riding that takes place in a corral out back. When someone first told us about this spectacle, my partner and I imagined a small pen inside the bar where brave patrons would try their hand at riding a wild animal. Not the case. The pen is surrounded by stadium seating filled with hundreds of people there to watch amateur riders be thrown from a raging bull into the dirt below. We settled in with neat tequilas, and everyone from families to groups of vacationing friends watched in awe as brave folks held on for dear life. If you walk down the main stretch of Cave Creek, you’ll notice other establishments are trying to duplicate the cowboy magic of Buffalo Chip. But after peering inside a few of the others, it was clear we spent our night in Cave Creek’s crown jewel. 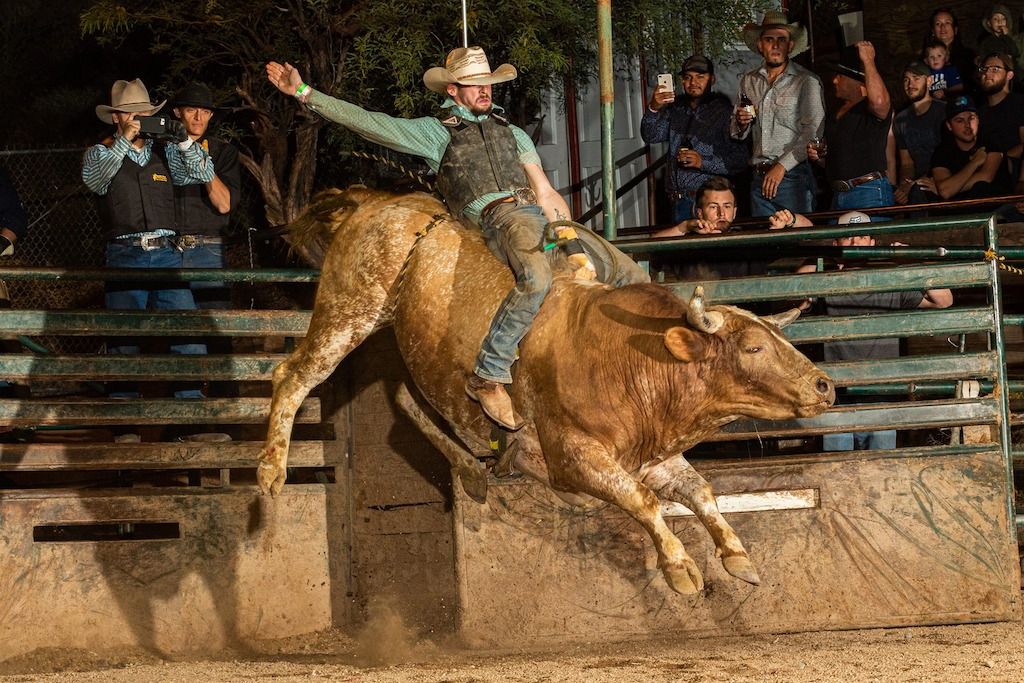 After a rowdy night in town, Civana is the best possible place to awaken. You can get moving by going on a guided hike, taking a spin class, sweating it out at bootcamp, or partaking in vinyasa yoga. Relaxing activities like guided meditation and sound healing are restorative options. A well-appointed resort gym is always there if you prefer your own fitness routine. Finally, a trip to Civana isn’t complete without time spent at the spa. 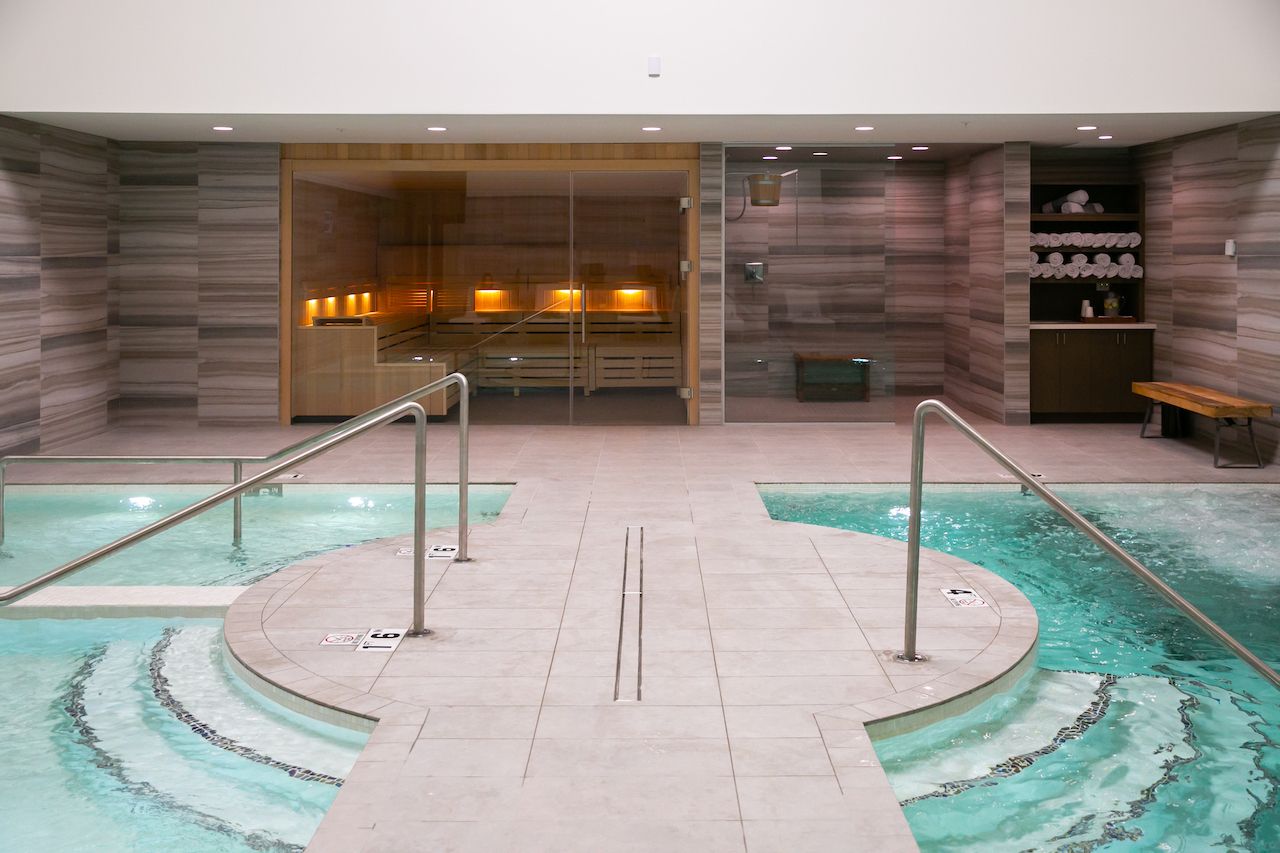 Even if you don’t schedule a treatment, the spa’s aqua vitality circuit is open to all Civana guests and is an absolute must during your stay. Designed to increase circulation and boost immunity, the five-part circuit takes you on a journey through hot and cold wading pools, a therapeutic soaking pool, a five-climate Klafs Sanarium (the only one in the United States), and a cold deluge shower. It gave us a much-needed zing after our night out in Cave Creek.

If you’re a spa person, splurge on the Down to Earth and Sea Body Detox. This ultra-relaxing, two-hour treatment starts with a ginger and sea salt scrub before an organic seaweed and Arizona mud layered body wrap is applied for detoxification. After the mud is removed, you’ll receive a full body, deep muscle relief massage to melt away any pain or tension. Following a treatment, the spa’s saltwater pool is a perfect place to spend the rest of your carefree afternoon. 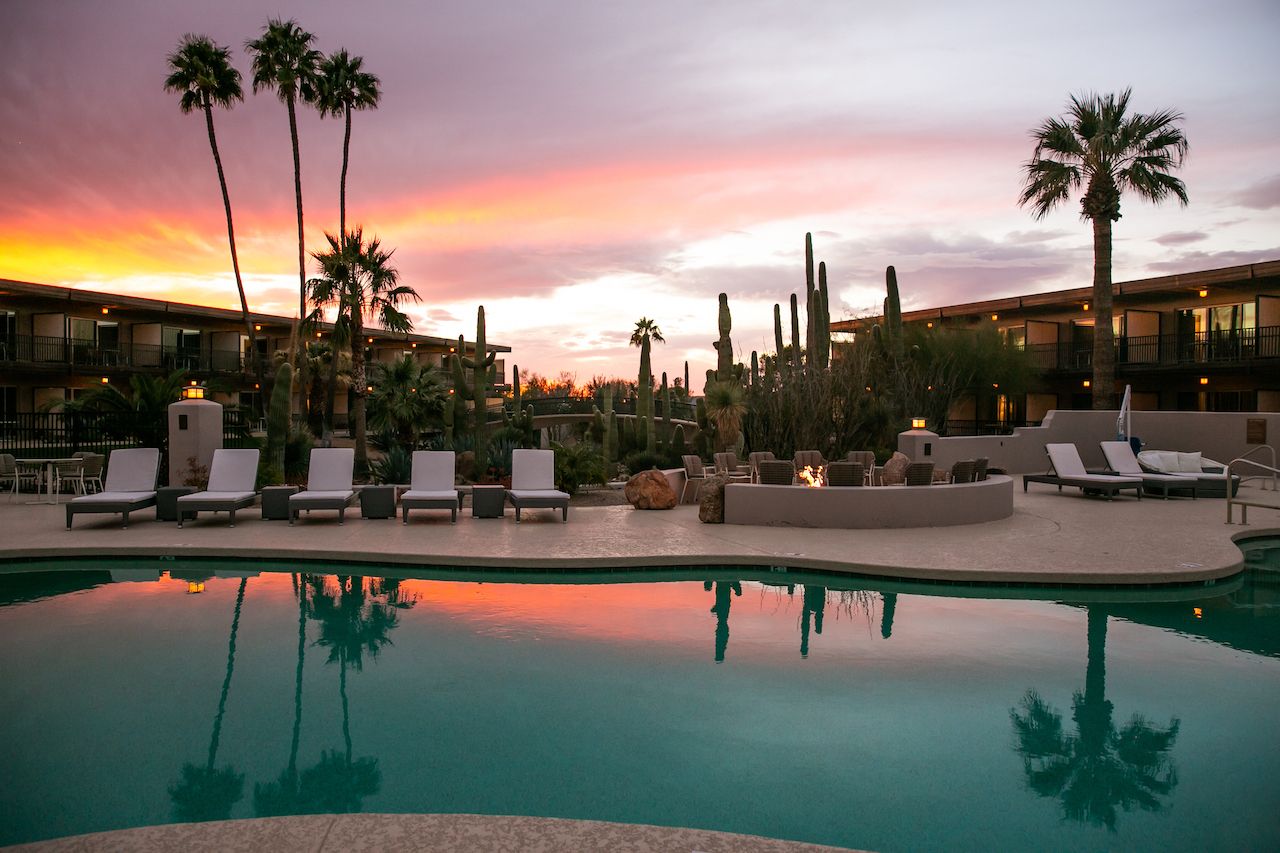 It’s not unheard of for daily stresses to follow you on vacation. At Civana, however, you’ll find the relaxing vibes promised in Carefree’s name. And if you’re feeling a little bit like Mr. Hyde, Cave Creek’s dusty cowboy vibes are just one town away.

WellnessWhat it’s really like to go on a mental wellness retreat
Tagged
Wellness Where to Stay Trip Planning
What did you think of this story?
Meh
Good
Awesome