Casu marzu is one of the most legendary dishes in Italy, a land that is already rife with so much legendary food. It’s part sacred culinary tradition in Sardinia, an Italian island situated in the Mediterranean Sea, part urban (or rather, rural) legend. It will either intrigue or repulse you – or maybe a little of both. It’s illegal, yet like driveway fireworks on New Year’s Eve, authorities turn a blind eye – or more likely, pull up a chair when it comes to nibbling on this intriguing delicacy. And like the Italian region from which it hails, casu marzu, the infamous maggot cheese of Sardinia, is a cultural relic unto itself.

On your next visit to Sardinia, you won’t see casu marzu on the supermarket shelf or restaurant menus. Still, if you’re a culinary adventurer determined to feast your way through Italy, it is possible to find it, if you know where, who, and how to ask. Here’s everything you need to know about tracking down casu marzu in Sardinia.

What is casu marzu? 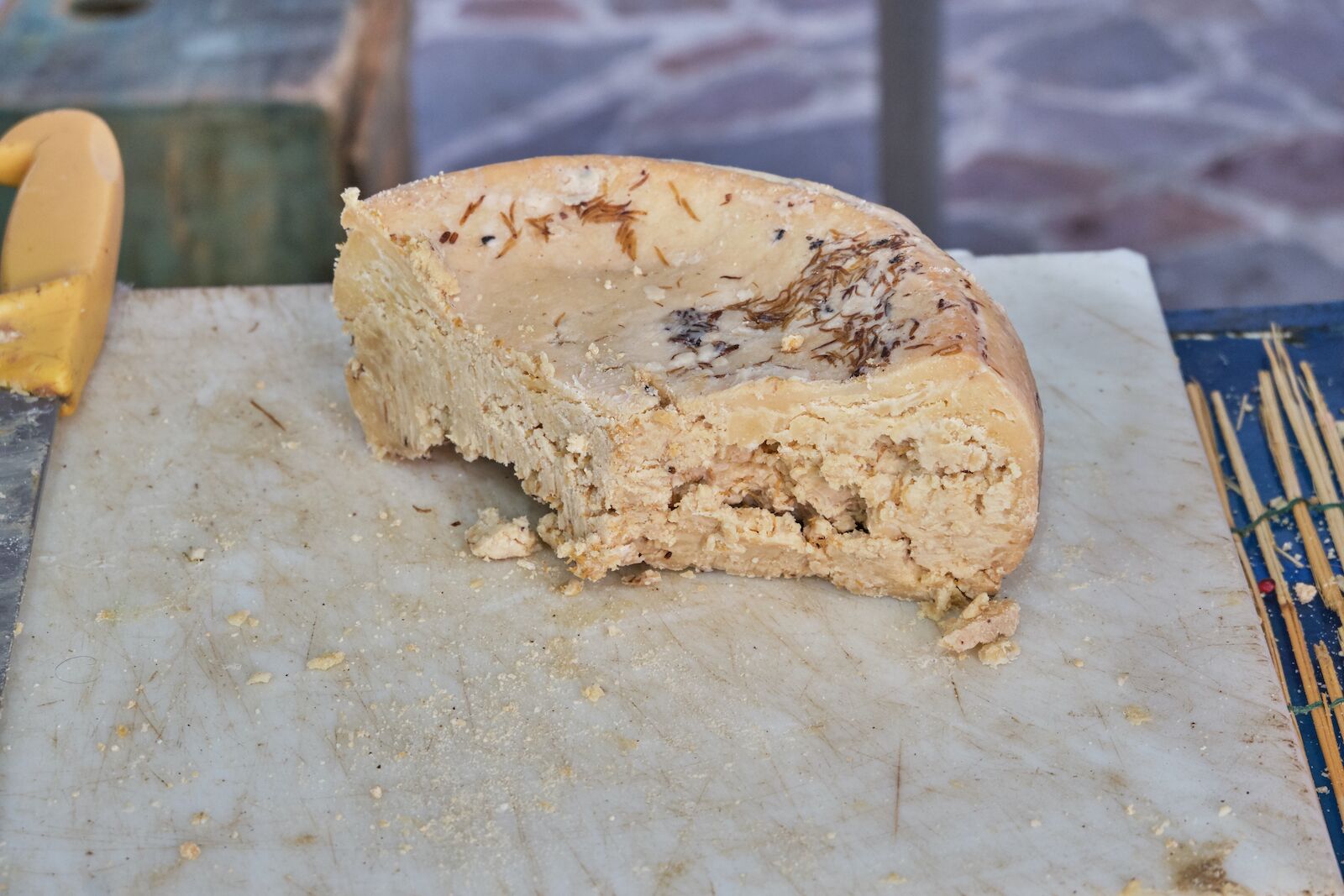 In Sardinian language, which is distinct from Italian, casu marzu translates to rotten cheese. Yes, all cheese is technically moldy, but casu marzu takes that meaning to a whole new level: The cheese is rotten because it’s infested with maggots. When you eat the cheese, you also eat the maggots. Alive. On purpose.

Casu marzu is created in the early days of the pecorino cheesemaking process, before the rind is fully formed on a new round of sheep-milk cheese. It can develop either by accident, when a piophila casei, or cheese fly, lays her eggs in the still-fresh cheese, or on purpose, when the cheese is deliberately exposed in order to tempt the flies to lay their eggs. The eggs hatch and become maggots. The maggots feed on the cheese, which enters their digestive tracks and creates an acid that passes back into the cheese. The acid breaks down the cheese fats and creates a creamy texture. When the cheese starts to ooze lacrime, or tears, it’s ready to eat. And far from making diners squirm, casu marzu is considered a delicacy in Sardinia.

For Sardinians and those who love the history and culture of Sardinia, casu marzu represents a lot more than just rotten cheese. Like so many culinary traditions, casu marzu was born from hardship and necessity. Sardinia is famous for its paradisiacal seascapes, but its interior is beautifully foreboding – with rocky soil, fields of boulders dotted with prickly pear cactus, and daunting elevation changes better suited to goats than humans. In the more than 5,000 years that shepherds have roamed this land, survival here has always meant adapting to whatever nature threw at them, and casu marzu, Dario Dongo, a Rome-based attorney and expert on food culture and law, tells that Matador Network that is a testament to “the great heritage of breeders’ resilience and genius.” Food and resource scarcity meant nothing could go to waste – not even cheese that the flies had ruined. Some years, fly infestations affected an entire season’s worth of cheese. So hardscrabble islanders learned to love their accidental culinary creations.

The flavor qualities of casu marzu are difficult to describe to people who have never tried it. Imagine the bite of a strong, aged pecorino cheese, and then multiply the tang and saltiness exponentially. Then factor in the smell, which has the same nostril-hair tingling acridness of every stinky cheese, turned all the way up. Add in the tongue-coating creamy consistency, and you’ve got a cheese that is memorable, to say the least. For lovers of strong, smelly cheeses like gorgonzola, limburger, or French Epoisses, taste-wise, casu marzu won’t be too much of a stretch.

Except for, of course, the maggots. They spring to high alert the first time the surface of the cheese is disturbed, and they begin to panic en masse and attempt to hop away from the scene. While most are smeared into the cheese, which is typically spread on paper-thin carasau flatbread, many escape, flinging themselves across the table, onto the cheese-eater’s hand, and, once deprived of a host, presumably off to a swift death. Sardinians wash down casu marzu with hearty Cannonau red wine, in order to cut the fattiness of the cheese.

Where to find casu marzu 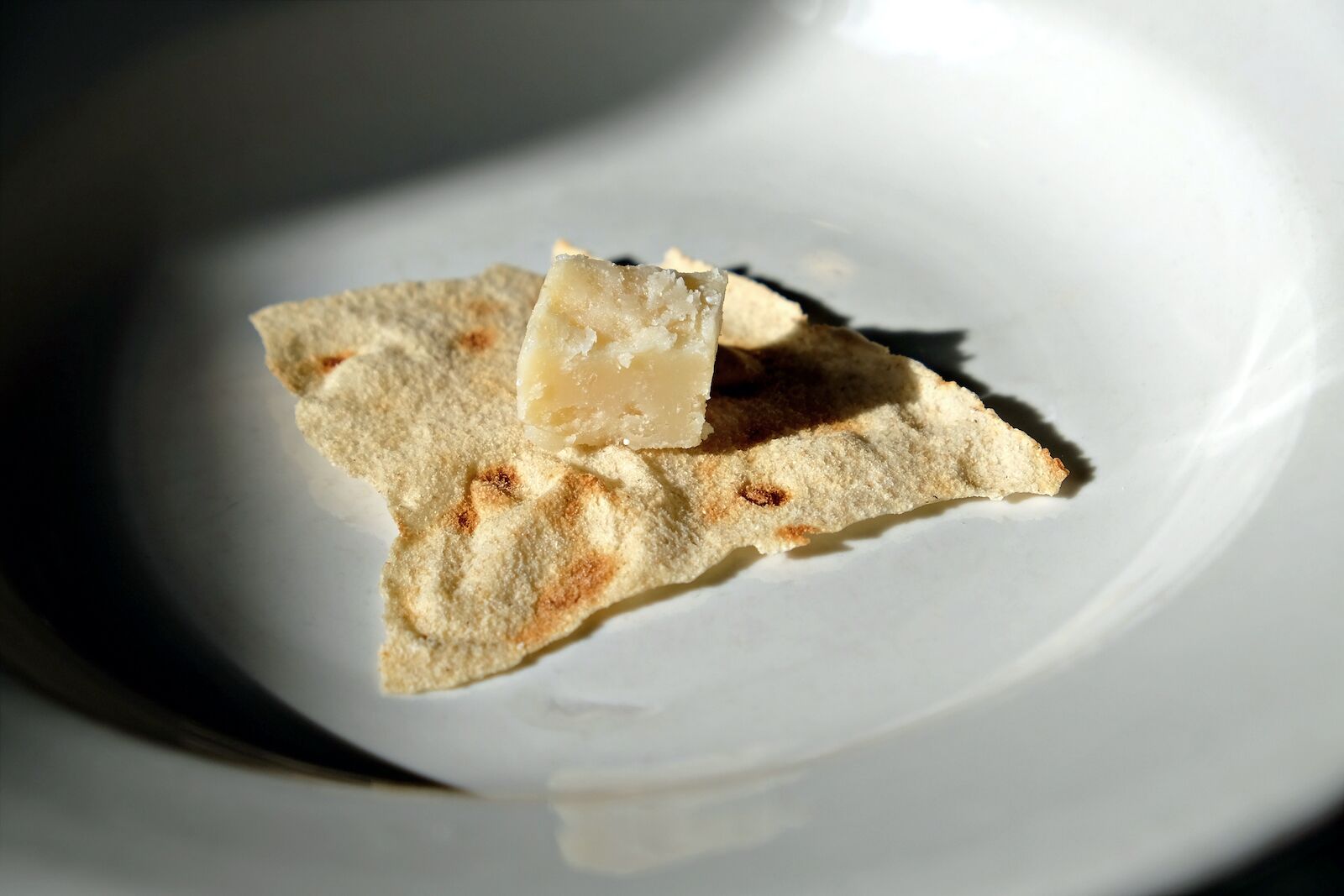 Commercial sale of casu marzu has been banned for decades, first by the Italian government and later by EU health authorities. Dario Dongo advocates for the cheese to be classified under the EU’s “novel food” label, but that would require that it be created in a controlled environment, which contradicts its origins and traditional preparation. Meanwhile, “the market is strictly local and it will remain so,” says Dongo, until some “pioneer of entomology” comes along and invents a safe and sanitary way to prepare and export it.

What does that mean for the casual visitor to Sardinia who has a hankering for casu marzu? You can’t just waltz into a restaurant and ask for it, but you can use some subtle diplomacy.

If you can’t score an invite to a private lunch or dinner, then head to the interior of the island, which is sheep-herding country. Rural establishments, such as agriturismi (farm stays with restaurants), aziende agricole (farms), or simple trattorie, are where your chances are highest for finding some of that wriggling cheese. Quietly ask if it’s available – Fancello says that late summer and fall is the best time to find it.

And Dongo urges the curious to not be put off by what can sometimes be seen as Sardinians’ stand-offish nature.

“Sardinians are an extraordinary and somehow mysterious community,” he says. “Nonetheless, as you get in touch with them, they’re so welcoming and proud to share their traditions. When you visit the countryside, in Sergio Leone’s spaghetti-western environment, you just ask and you will find.”

But just remember, once you’ve asked for and been offered casu marzu by a food-proud Sard, there’s no turning back. Make sure to keep that Cannonau wine handy.

Food + DrinkWhat It’s Like To Go Truffle Hunting in Italy With Tuscany’s ‘Giulio the Truffle Hunter’
Tagged
Food + Drink
What did you think of this story?
Meh
Good
Awesome