For real outdoor enthusiasts, the best that Brazil has to offer lies beyond its famous beaches. Hidden away in the interior of this vast country are a wealth of national parks, including the stunning Chapada dos Veadeiros in the Brazilian highlands. Located in the state of Goiás, just 150 miles north of Brazil’s federal capital, Brasilia, this natural paradise is a haven for adventurers seeking secret waterfalls, spectacular vistas of Brazil’s tropical savanna, and, if the rumors are to be believed, potential supernatural encounters.

The Cradle of Water 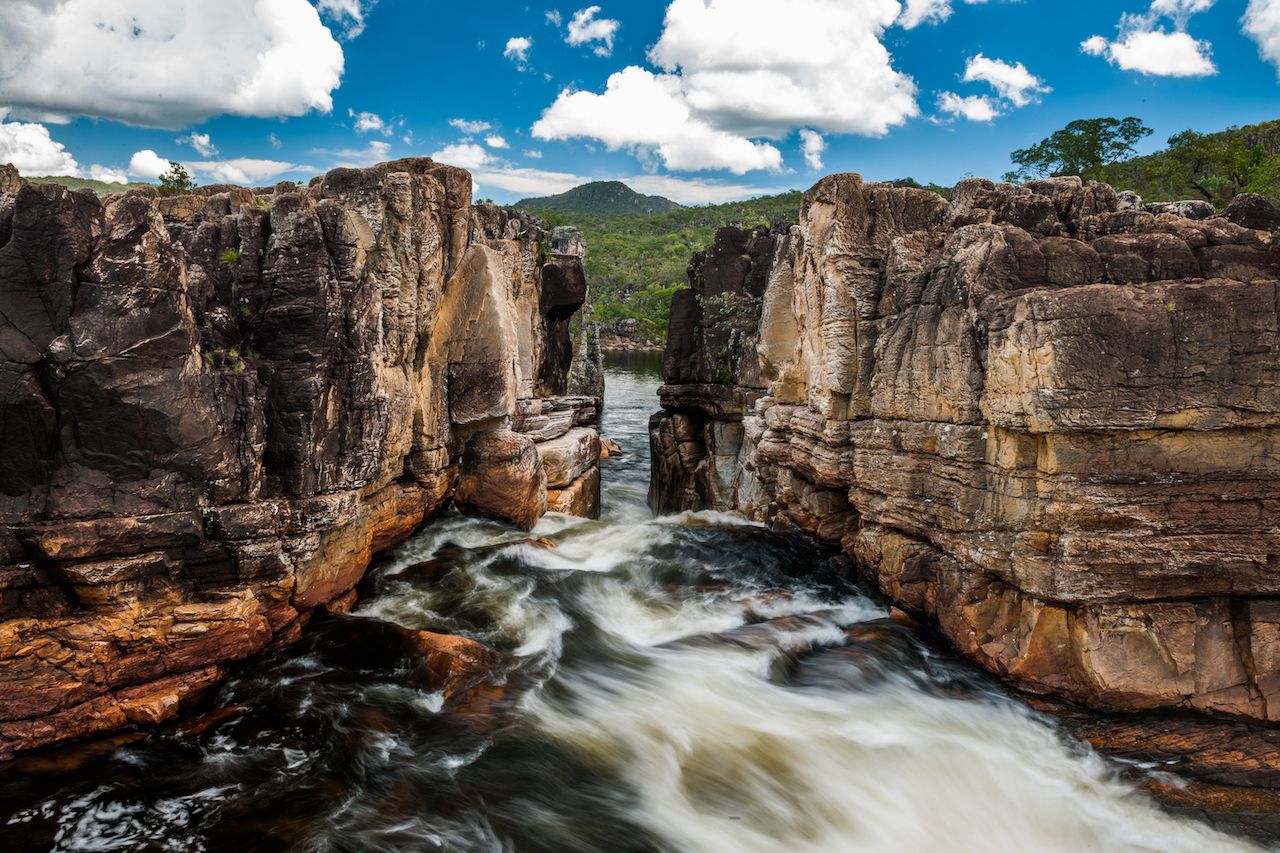 Chapada dos Veadeiros rests atop an ancient plateau two billion years in the making. An intricate system of converging rivers and streams has carved out a geological legacy which gives the region its second name: the Cradle of Water. Waterfalls cascade through rocky canyons and verdant valleys in their hundreds, making it impossible to pack visiting them all into a single itinerary. Some are easier to get to than others. Three waterfalls, including the mightily impressive Almécegas I, are accessible via Fazenda São Bento, a private farm a mere ten-minute drive from the popular backpacking town of Alto Paraíso de Goiás. But the best of Chapada’s natural wonders are reserved for travelers who are prepared to venture (literally) beyond the beaten track. 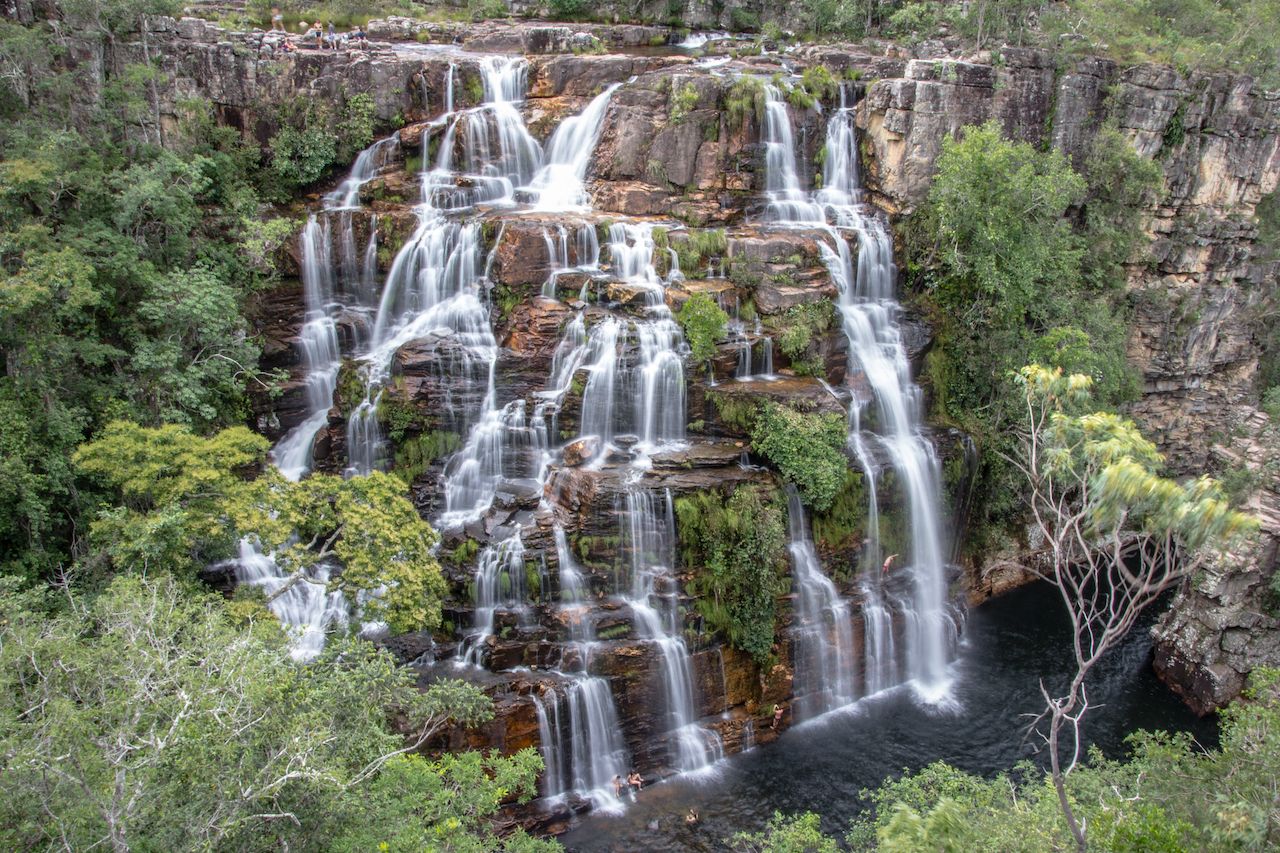 The GO-239 and GO-118 are the two major highways which bisect Chapada’s landscape. These perfectly paved roads offer some incredible views across the savanna, which is known as the “cerrado.” In the late afternoon, hundreds gather by the roadside on the G0-239 to watch the sun set over the stunning Jardim do Maytrea, or Maytrea Garden, named for the line of palm trees that front the hills beyond. Branching off from these highways are countless dirt tracks that cut through forests and traverse valleys to reach Chapada’s hidden waterfalls.

One of the most extraordinary waterfall circuits is the Cachoeira Macaquinhos, or Little Monkey Waterfall, an easy 2.5-mile trail which lazily strafes the River Macaquinho as it cascades through a series of sublime waterfalls and emerald pools culminating in a spectacular fifty-meter drop. Getting to Cachoeira Macaquinhos is tough. Nearly 20 miles of dirt road lie between the highway and the circuit’s starting point, and the last half-mile or so is a grueling, precipitously steep descent which will test the mettle of even the most battle-hardened 4×4, but the sights that await render the hardships worthwhile. 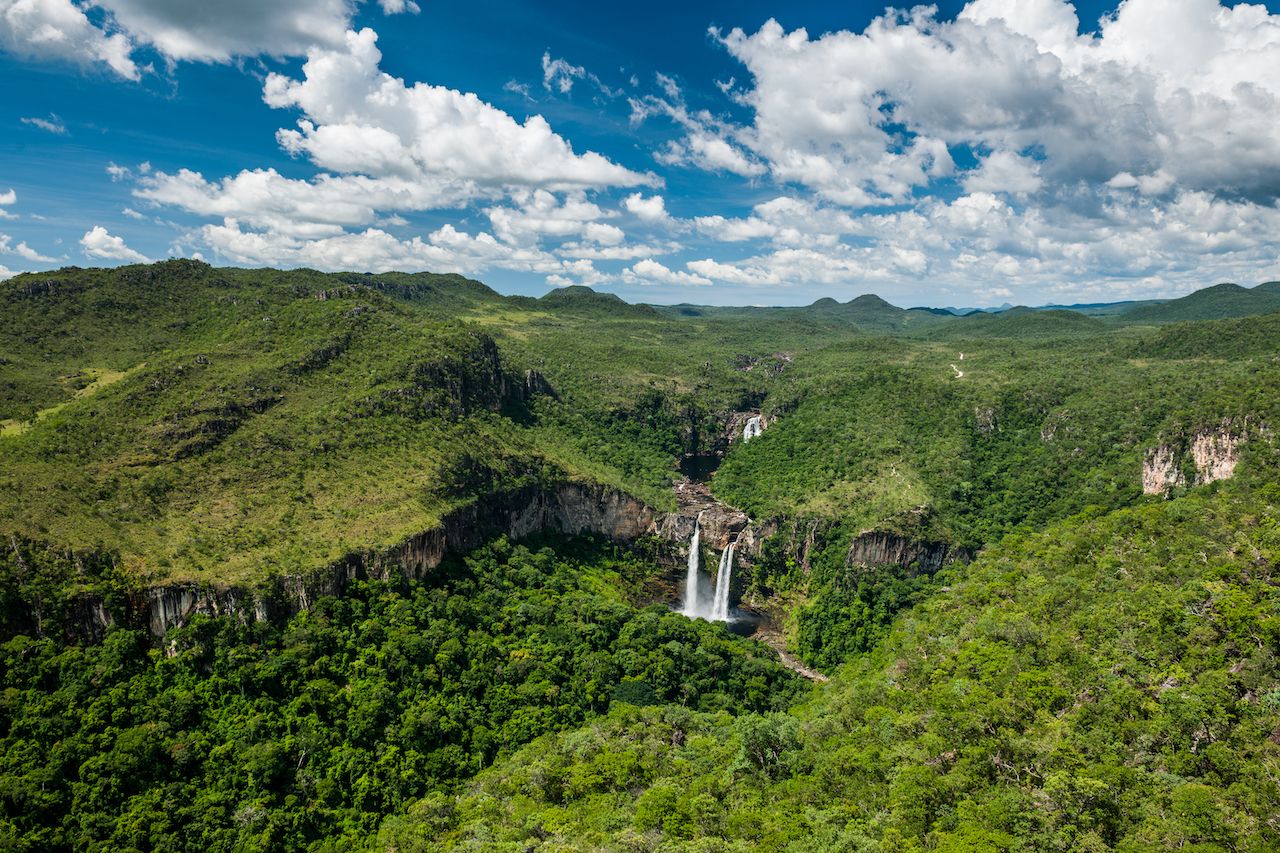 Arguably Chapada’s most famous sight is one that you’ll view through a window. The hike to Mirante de Janela can be tough, with a few steep ascents in places and some makeshift wooden staircases and wobbly handrails that hardly inspire confidence. But the trail’s climax doesn’t disappoint. Mirante de Janela — meaning “window lookout” — is a unique rock formation that perfectly frames a stunning vista of the cerrado landscape with a view of the Rio Preto Falls as its centerpiece.

Go early enough and stand in awe as you catch the last magical moments of the sunrise bathing the scene in an amber glow. Moments later, you’ll likely find yourself having to wait in line to get that perfect shot as the hordes of Instagrammers descend on the lookout. Then, escape the crowds and take refuge on the higher ground atop the wooden parapets that have been erected above the window and offer breathtaking panoramic views of the national park. 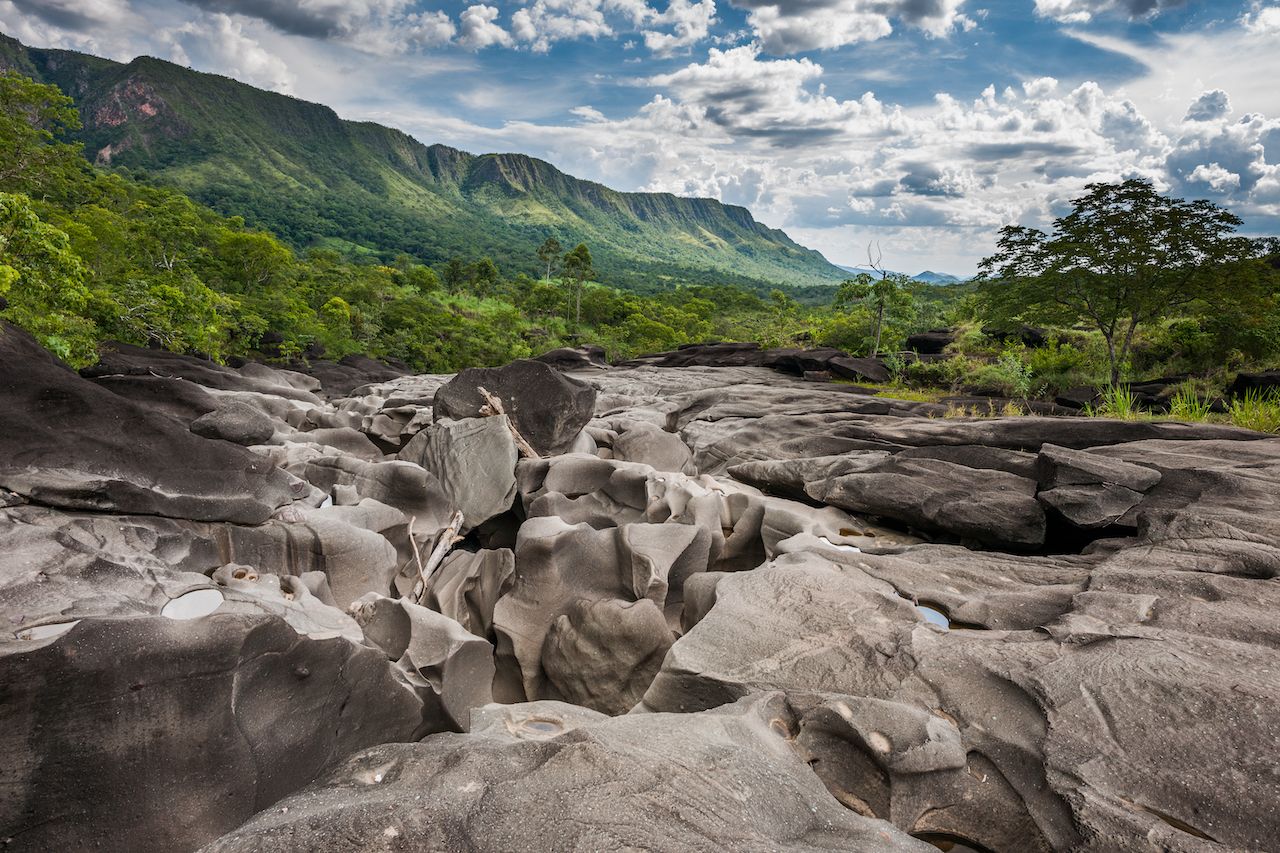 Most of Chapada’s waterfall hikes are well signposted and straightforward enough to manage under one’s own steam. But in order to discover the secrets of the Vale da Lua (Moon Valley), consider enlisting the services of a local guide who knows it’s hidden nooks and crannies best. The unique, lunar-like landscape has been sculpted by the erosive power of the São Miguel River, which rushes and swirls through corridors and cauldrons that have been chiseled out in the rock over the course of millions of years. Slipping below the surface to explore the rock formations solo is ill-advised, but experienced guides can lead visitors on a safe, subterranean tour of the Vale de Lua’s otherworldly network of potholes and passageways. 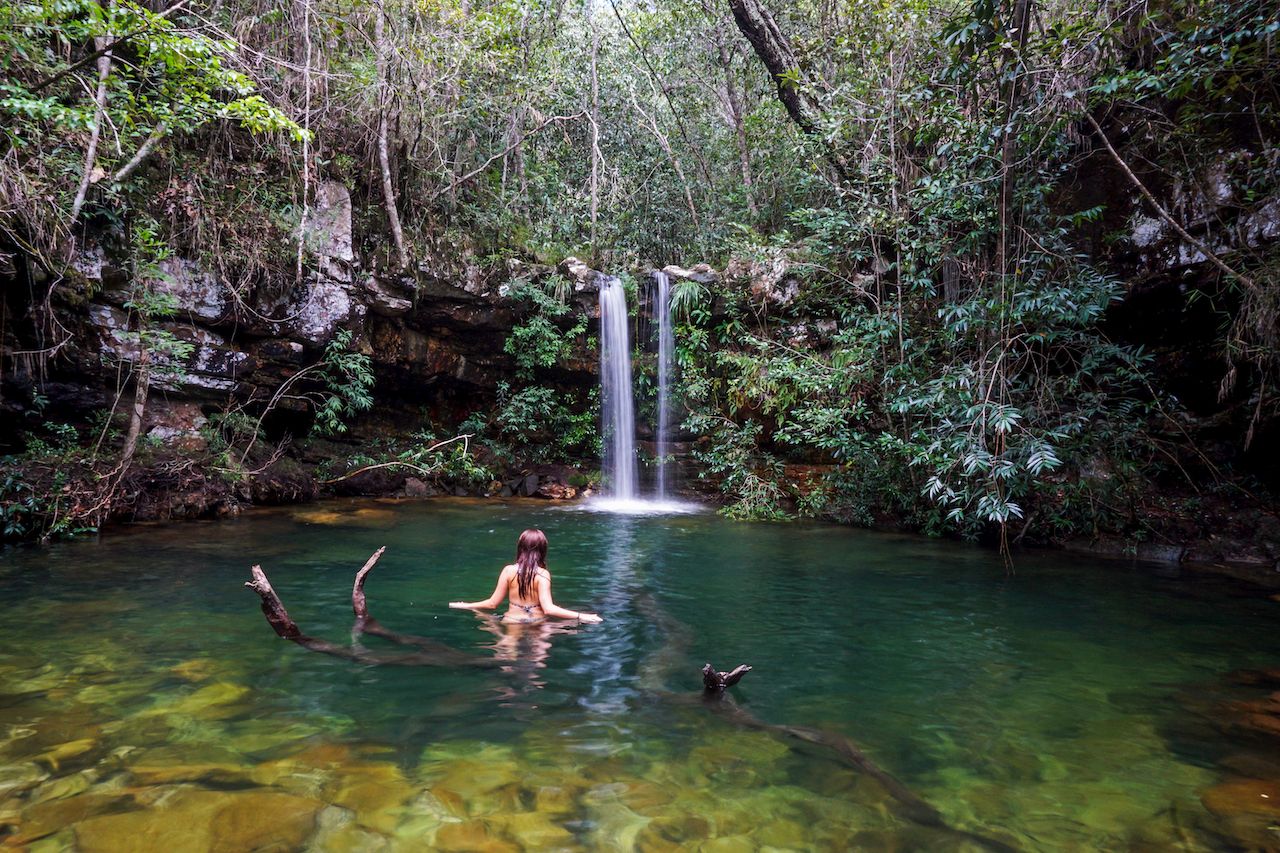 The story goes that in the 1960s, photographs taken by NASA satellites orbiting the Earth revealed that the area surrounding Chapada dos Veadeiros National Park was quite literally glowing. Considered after that to be the most luminous natural point on the globe, the orthodox explanation for this phenomenon is that the park lies upon a bed of crystal quartz that reflects light like a mirror. The spiritual energy believed to be gleaned from those crystals was enough to attract many bohemian types to the towns surrounding Chapada, but people of even more mystical persuasions have cited its geographical position as further evidence of the region’s supernatural character.

Like Machu Picchu, another area famous for its mystical energy and the former home of the Incas, Paralelo 14 — the circle of latitude 14 degrees south of the equator — cuts exactly through the Jardim Zen, or Zen Garden, a popular viewpoint on GO-118 highway. The spiritually inclined claim that the Incas, who “vanished” suddenly in the sixteenth century, built a cosmic bridge to connect their homeland to Chapada, a route now frequented by aliens — hence the unusually high reports of UFO sightings in the area. Head to any bar in the hippie towns of São Jorge and Alto Paraíso and you might catch one of the region’s many mystic societies swapping stories of extraterrestrial encounters over a cold choppe, or draft beer.

Getting there and getting around 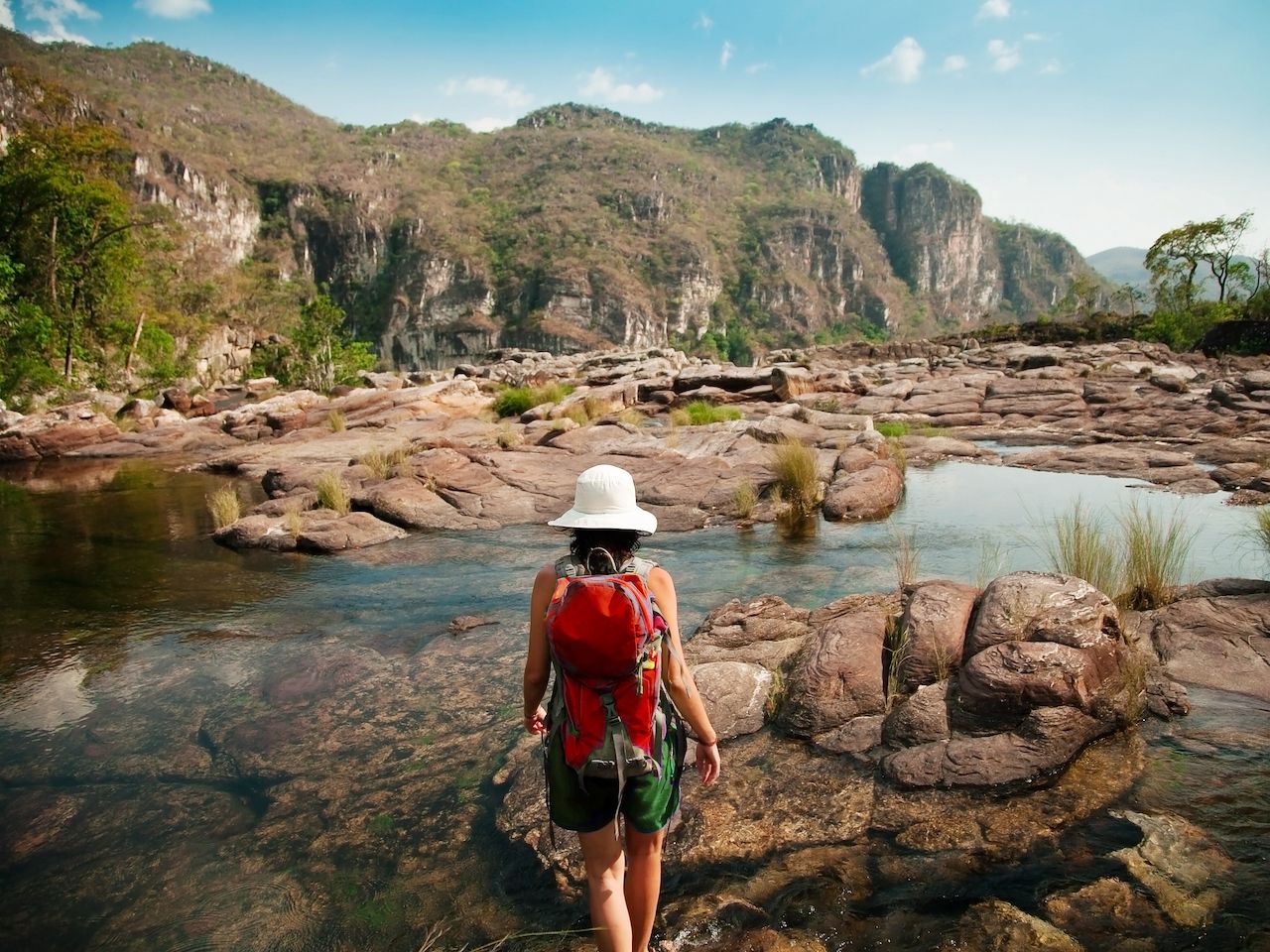 The easiest way to arrive at Chapada dos Veadeiros is to fly to Brasilia and then rent a car for the 150-mile drive to the beginning of the vast park. Choosing a sturdy 4×4 is strongly recommended; the highway to Chapada is in excellent condition but the same can’t be said for the dirt tracks that will lead you to its waterfalls.

At Chapada, visitors tend to stay in one of two locations. The town of Alto Paraíso de Goiás is the gateway to the park and has a decent range of hostels and pousadas to cover all budgets. Twenty-five miles to the west is São Jorge, a more rustic village with fewer services but plenty of character. Stay in one of the village’s charming inns or connect with nature at an eco-camp for the full Chapada experience. From here it’s possible to walk to the starting point for the hike to Mirante de Janela, which makes São Jorge a popular jumping-off point for travelers wanting to beat the crowds and soak up the sunrise at the famous lookout spot. In both towns you’ll find cozy restaurants, quirky craft shops, and a host of easygoing locals and adventurers who perfectly embody the invigorating spirit and energy of the extraordinary Chapada dos Veadeiros.