Americans who have encountered chicken feetat dim sum restaurants probably already know that the dish is popular in China. Some stories claim that people originally began eating it in order to save every part of the slaughtered animal before the age of industrial farming. This is not completely true. The earliest record of chicken feet as food is in a chronicle compiled in the 3rd century BC. “When the duke eats chicken, he must eat the feet, and wouldn’t be satiated until he has eaten thousands of them,” the author wrote. This might be an exaggeration, but reducing food waste probably wasn’t on the duke’s mind.

Having grown up in China, I have always known chicken feet as a homey dish. Like wings and livers, they are sold by weight in farmers’ markets and labeled as “chicken accessories.” My dad cooks them the same way as he does other meat ‒ blanch them to get rid of excess fat, and braise them until the tendons become pliable and the bone tissues grisly. For seasoning, he doesn’t follow a specific formula but uses common sense instead ‒ a ladle of light soy sauce for umami, half a ladle of dark soy sauce for to add color, a few slices of ginger, a handful of star anises, and occasionally a pinch of red chili pepper. The tendons are extra soft and rich when fresh off the stove. But I also love braised chicken feet as a leftover, when the collagen-rich sauce gels into bouncy chicken jelly, which I sometimes scoop out of the bowl and eat plain.

The most popular varieties of chicken feet have their origins in Sichuan and Cantonese cuisines. The former is known for its spiciness; the latter emphasizes working with the ingredient’s original flavors. A Sichuanese appetizer called zhangzhongbao (掌中宝, loosely translated as treasure in the palm) is made completely of footpads, the fleshy knots in the center of the birds’ feet. Each serving consists of a small mound of the footpads, deep fried and tossed in chili oil. In Cantonese-style dim sum restaurants, this dish is fried before they are steamed with fermented soy beans, so that the sauce clings to the wrinkled skins more easily. Sometimes the bones, including those on the chicken fingers, are removed before cooking.

These days, social media also plays a part in the spread of new recipes. Ideas that go viral on Tiktok (known as Douyin in China) are quickly picked up by food companies, who in turn adapt them for mass manufacturing. A quick search for “chicken feet snack” on the online shopping site JD.com returns over 270,000 results. The selections are dazzling. Each flavor ‒ there are tens, if not hundreds, of them ‒ may come deboned or with bones, with or without fingers, in single servings or as part of gift baskets.

This doesn’t mean that chicken feet have lost their roots in the home kitchen. After all, this dish is best when fished out of the cooking pot before being served on the dinner table, or raided from the fridge when the jelly still clings to the fingers, or enjoyed with the most intimate friends when you can chew the bones and suck the sauce without a care about table manners. If you are ready to get messy, here are some classic chicken feet dishes that you can easily find in Asian grocery stores or in Chinese restaurants. 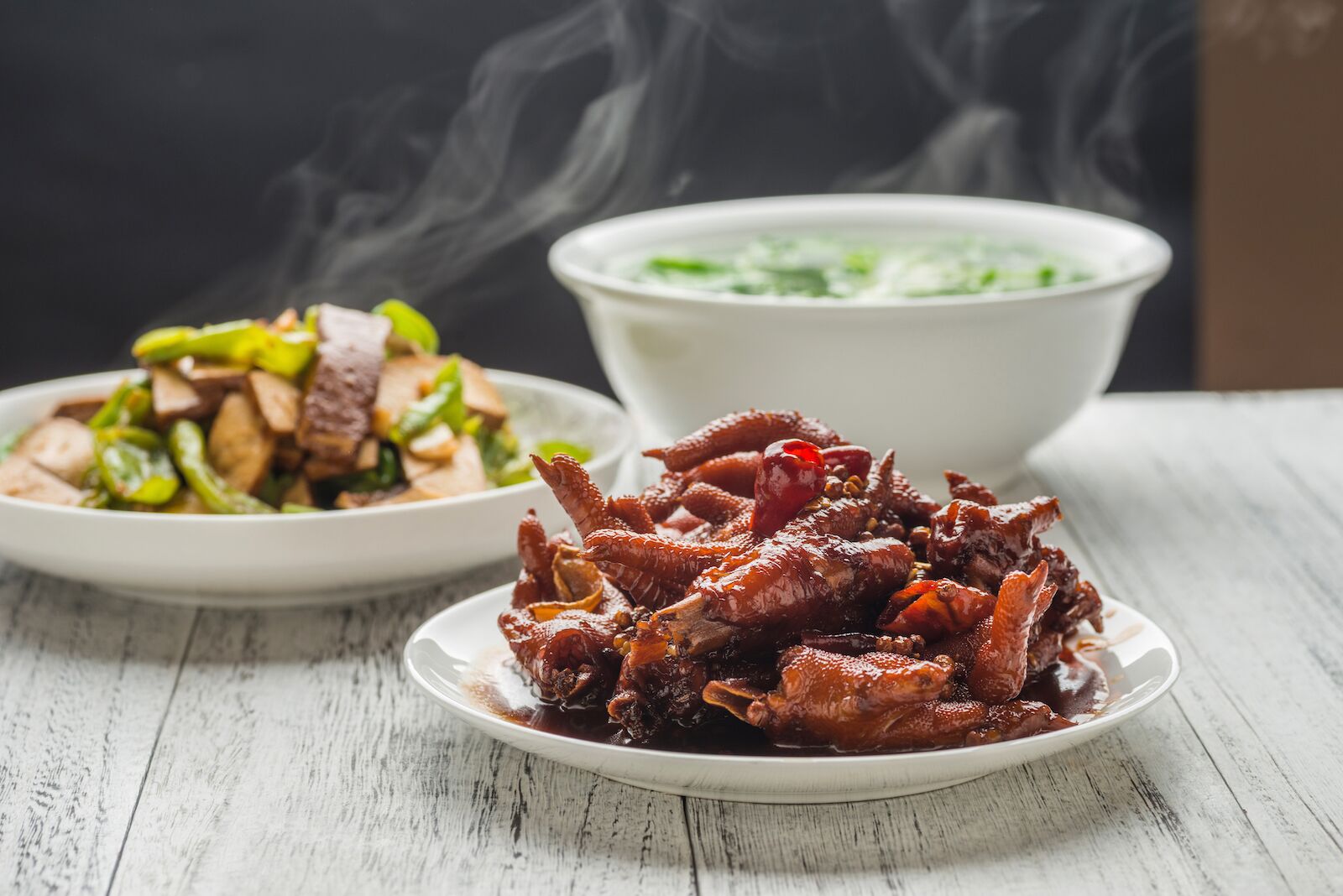 Chicken feet are boiled, and then pickled in an acidic brine with a variety of herbs and spices including Sichuan peppercorns, star anise, and most importantly, whole chili peppers. For the brine, most recipes use rice vinegar or lemon juice, but traditionalists prefer to recycle the brine from previous batches for more complex flavors.

Chicken feet are boiled and then marinated with sliced lemon and cilantro in diluted passion fruit juice. The recipe first went viral on TikTok (Douyin) during the pandemic lockdown, as a variation to the classic version with marinated chili peppers. Now, many food companies offer this flavor in vacuum packs. 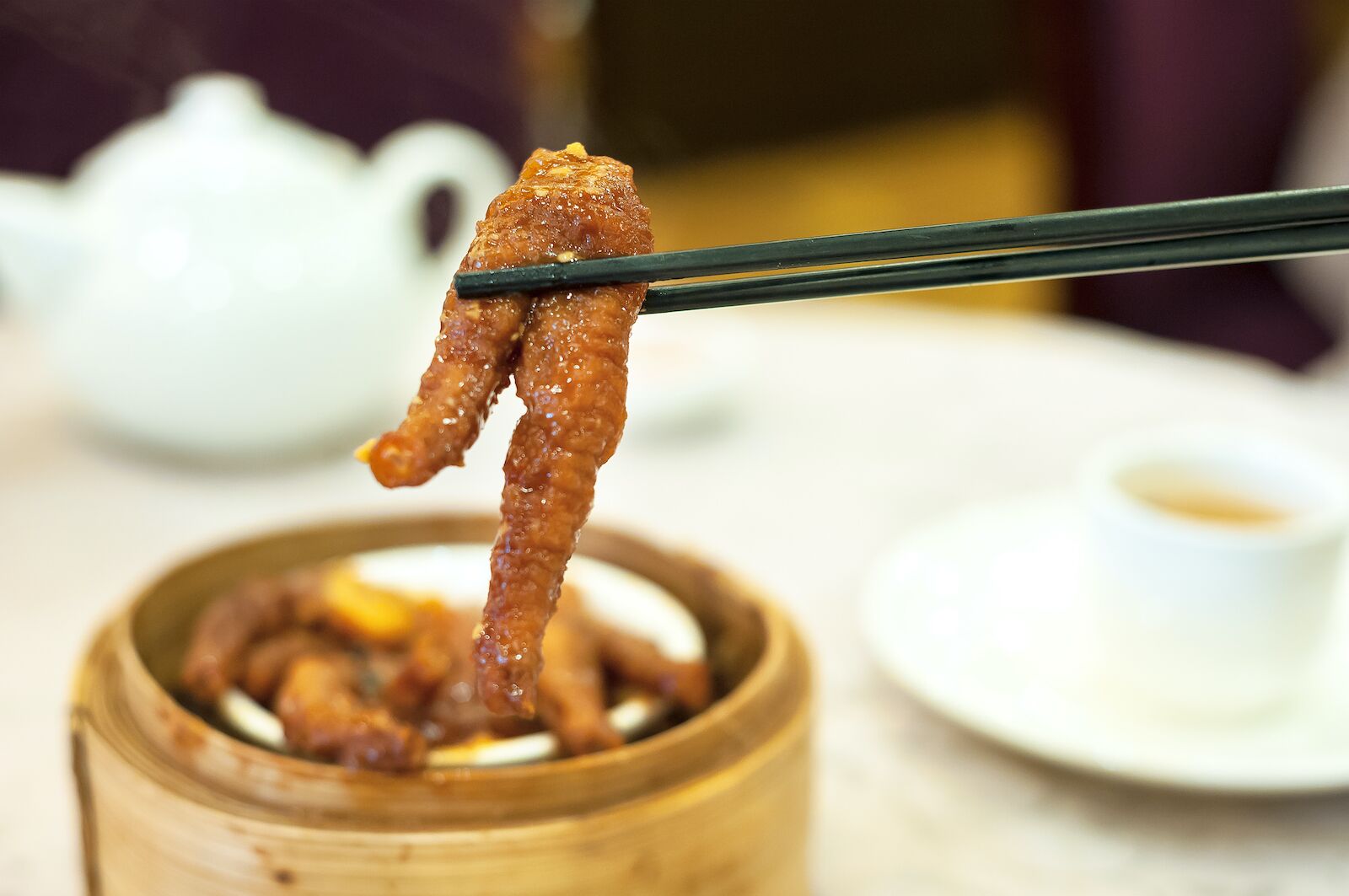 You can find this version in almost any Cantonese-style dim sum restaurant. Chicken feet are fried and steamed with a sauce made from fermented beans and oyster sauce. In some recipes, the chicken feet are braised instead.

A traditional Cantonese dish made by marinating boiled chicken feet in a juice made of sugar, vinegar, and rice wine. It is sweeter and milder than the Sichuanese version, and is served as a cold appetizer in many Cantonese restaurants. 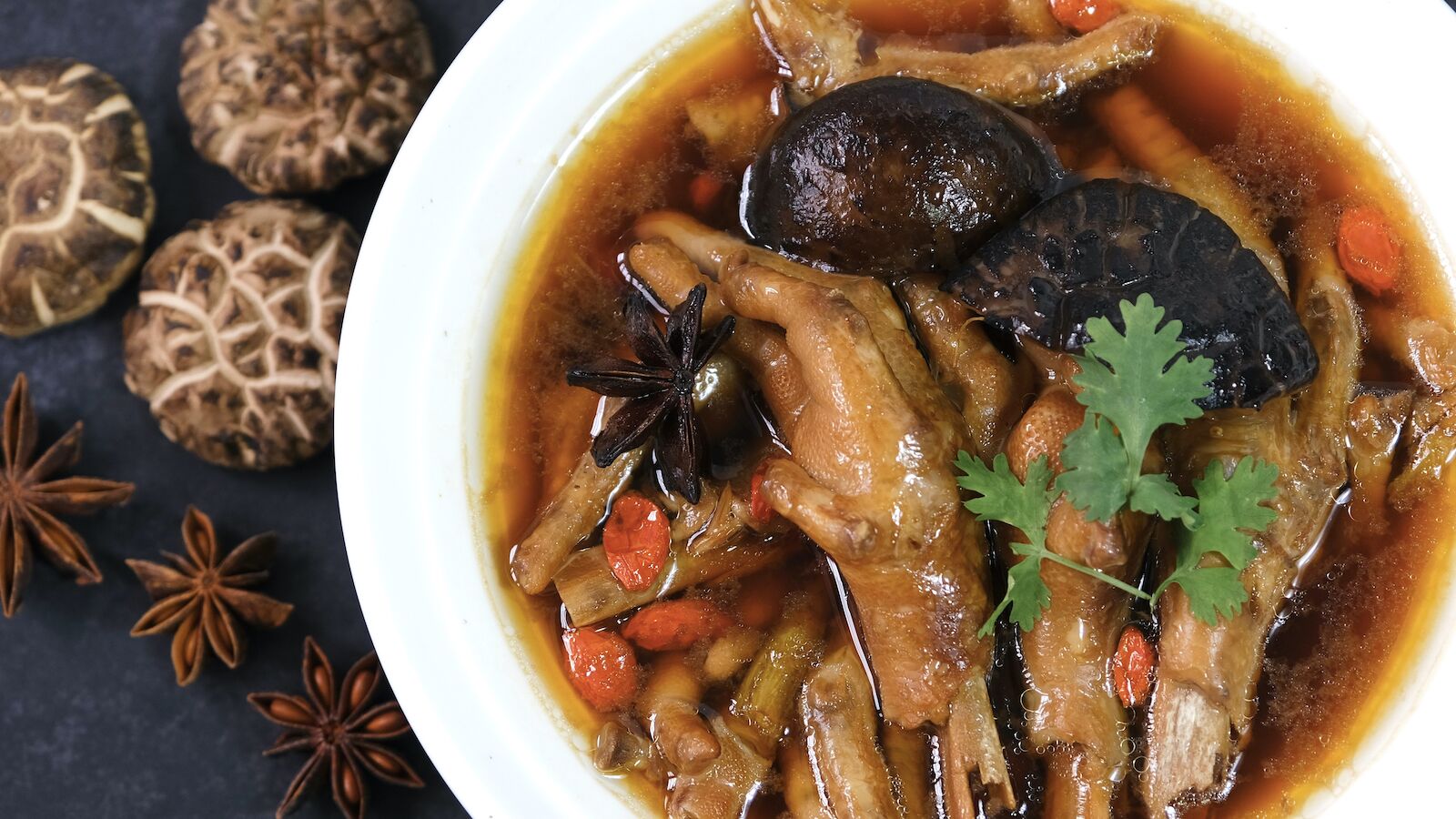 A classic stew that can be found in many homestyle restaurants. Chicken feet are blanched and then braised in a soy-based sauce. The use of seasoning is flexible, but some most commonly used spices are ginger, scallion, and five spice powder (made of star anises, cloves, cinnamon bark, Sichuan peppercorns, and fennel).

In this dish, the sauce for the chicken feet is brought to a boil and let simmer for half an hour. Then the chicken feet are marinated in the sauce overnight to let the flavors seep in. It is often served as a cold appetizer in homestyle restaurants, and is also sold in vacuum packs.

“Treasure in the palm” (掌中宝)

A popular hot appetizer that can be found in many Sichuan restaurants. Chicken footpads are seasoned with salt and pepper and then fried. Many chefs finish by tossing them in chili oil but non-spicy versions are not hard to find.

Dessert12 Sweet, Savory, and Delicious Chinese Desserts You Have To Try
Tagged
Food + Drink
What did you think of this story?
Meh
Good
Awesome