Wherever you go in Hungary, you’re likely to find a hollow funnel cake called kürtőskalács, or chimney cake. The thin, sweet bread is covered in butter and granulated sugar before being roasted to a golden brown for just the right crunchy to soft ratio. The first known recipe dates back to Countess Maria Mikes in 1784, but, according to legend, kürtőskalács were around for centuries before that and once saved a city under siege from starvation.

Scholar and writer Balázs Orbán recorded the story of kürtőskalács in 1868. The dessert, he wrote, was invented by women in what is now Sekler Land, the Hungarian-speaking region of Transylvania, during the Mongol invasion in 1241. When the Mongols invaded the countryside, the people of Máréfalva retreated into caves in the hills above the village. The Mongols followed them, but they couldn’t get to the protected area. Instead, they laid siege to the caves to try and starve the Seklers out. As the siege dragged on, both sides started running out of food. The Seklers knew the army waiting outside had just as little resources as they did, however, and the women in the cave came up with a plan to fool the invaders.

They took all of their leftover flour and mixed it with water and ash from the fireplace to make it seem larger. Then, they rolled it on a long wooden pole and baked it, creating a bread that seemed large but was hollow on the inside. The Seklers held the food out of the caves for the enemy to see, essentially saying, “Look how well we still live, while you’re starving.” Seeing this, the Mongols saw no other choice and left.

Whether or not the legend is true (a version of similar hollow breads are found throughout Europe and likely date back to ancient Greeks), it’s come a long way since those early years. Hungarian nobility made it popular in the 18th century, but then popularity dipped during the years that the region was walled off by the USSR. After the fall of the wall when all of Romania — including the Transylvania region — once again opened to tourists, visitors from Hungary went to the Sekler-Hungarian villages, where locals sold kürtőskalács. The bread became the image of Transylvania and the Sekler-Hungarians in Hungary, and by the middle of the 1990s, it was popular all over both countries. 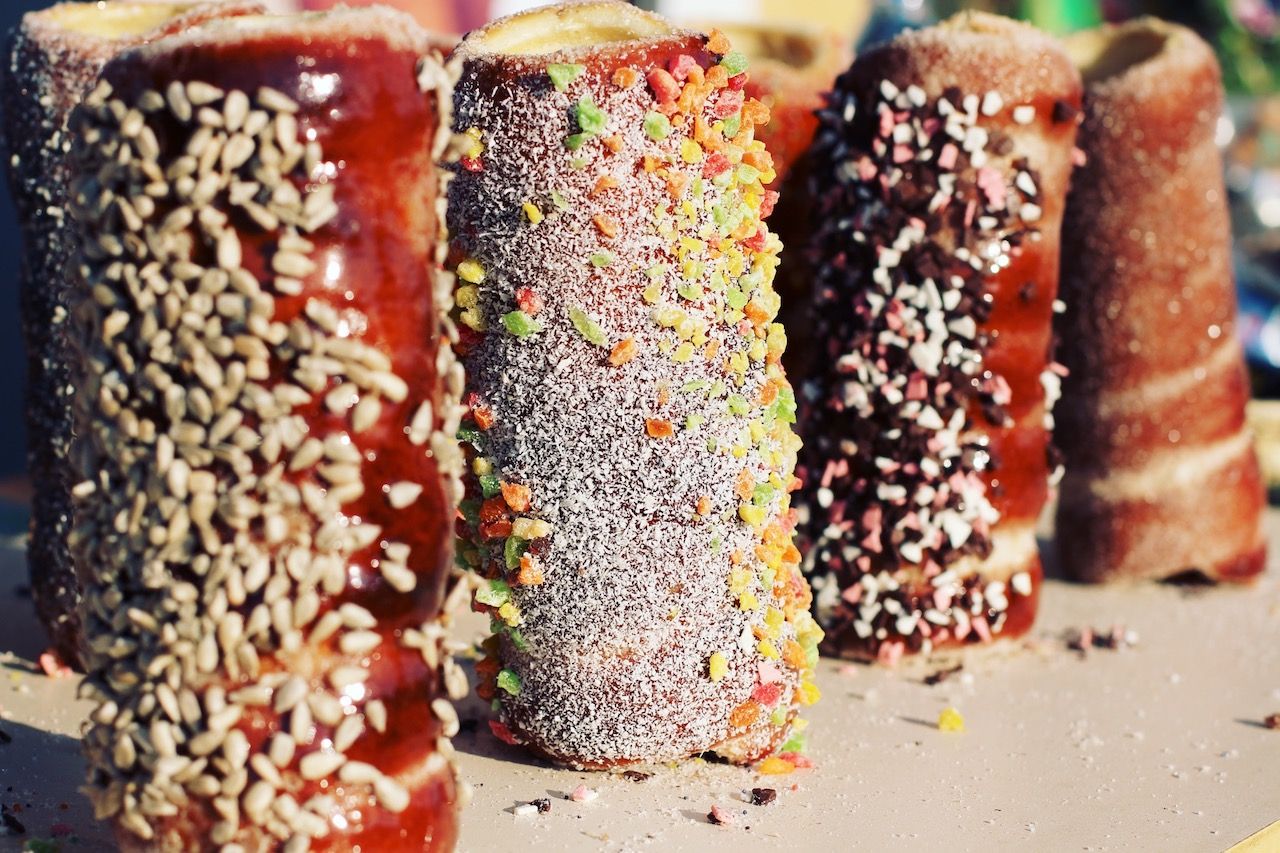 Today, you can find kürtőskalács made with ground walnuts, powdered cinnamon, chocolate, and pretty much any other topping you can imagine. Sometimes the hollow middle is filled with whipped cream. The long, pipe-like bread (kürtö means “stovepipe” and kalács means “sweet bread”) is eaten in strips that easily tear off from its main body. It’s no longer served solely during holidays and celebrations, and can be found year round.

Other countries have different names for kürtőskalács. In Romania, it’s also known as cozonac secuiesc. German-Saxons call it schornstein kuchen. A variation that lacks the caramelized sugar glaze is popular in Slovakia and the Czech Republic, where it’s called trdelník. The Polish call it it kurtoszkalacz or węgierski kołacz.

You don’t need to go to Eastern Europe to taste one for yourself, though. Kürtőskalács are made around the world. A New York City-based company called Twister Cakes uses a traditional Transylvanian recipe and ships them nationwide.

Still, the best way to enjoy kürtőskalács is to buy it hot from a vendor in Transylvania or Hungary. Part of the fun is watching them make it, and nothing compares to a fresh-off-the-coals piece of kürtőskalács.

In Transylvania, you’ll find permanent stalls selling kürtőskalács made onsite in every Hungarian-speaking town and every tourist destination, from Tusnad to Poiana Brasov and Turda Gorge. In Hungary, Budapest is one of the best cities to buy kürtőskalács. Look for Vitéz Kürtős, which is run by a famous Transylvanian family from Székelyudvarhely and has permanent stalls in the Csillagvár Shopping Center in the 3rd District and at the Budapest Zoo. On Budapest’s main street, Váci utca, head to Molnár’s Kürtőskalács. Though you’ll pay more for it there, you can sit and enjoy a historical treat on one of the world’s best known and most attractive pedestrian shopping streets.

How ‘ruin bars’ became the hottest drinking spots in Budapest
Tagged
Dessert Food + Drink
What did you think of this story?
Meh
Good
Awesome