A crossroads for Judaism, Christianity, and Islam, Israel hosts an abundance of religious celebrations throughout the year, but December is a very special time to be in the Holy Land for Christians, Jews, and travelers who wish to experience this highly spiritual place in all its glory. Beyond spending Midnight Mass in the Church of the Holy Sepulchre or celebrating Hanukkah at the Western Wall of the Temple, both of which are in the Old City of Jerusalem, there’s plenty for visitors to check out to have a memorable holiday time in Israel. Here is a selection of the best events travelers should not miss. 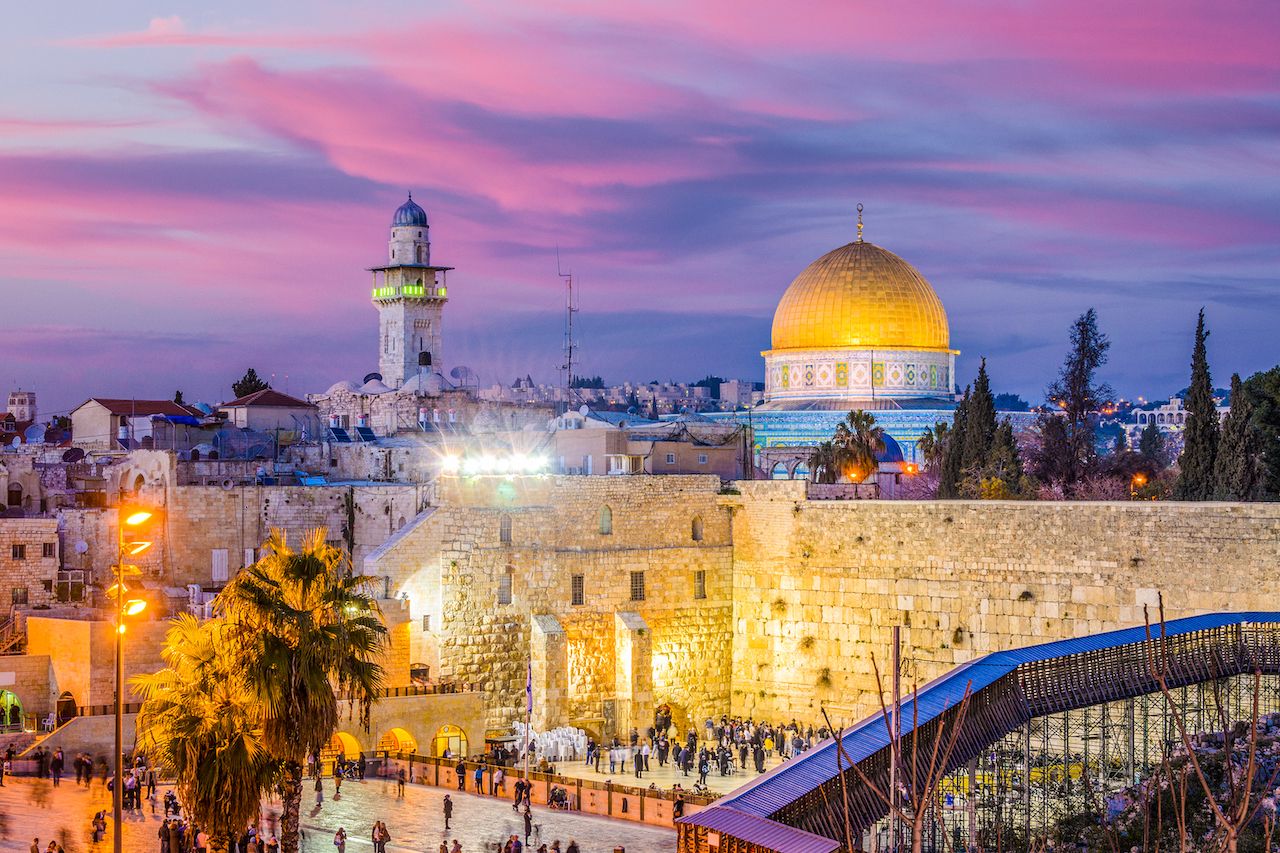 The heart of the Holy Land has as much cultural appeal as spiritual, and there are few more exciting places in the world to be for Christmas or Hanukkah. The first major events to experience are the Hanukkah Torch Relay, which will start during the afternoon on December 22 and end in the early evening in the Old City. The Torch Relay is a running event where participants run a lit torch from the town of Modiin, the home of the Maccabees, to light a giant menorah at the Western Wall. 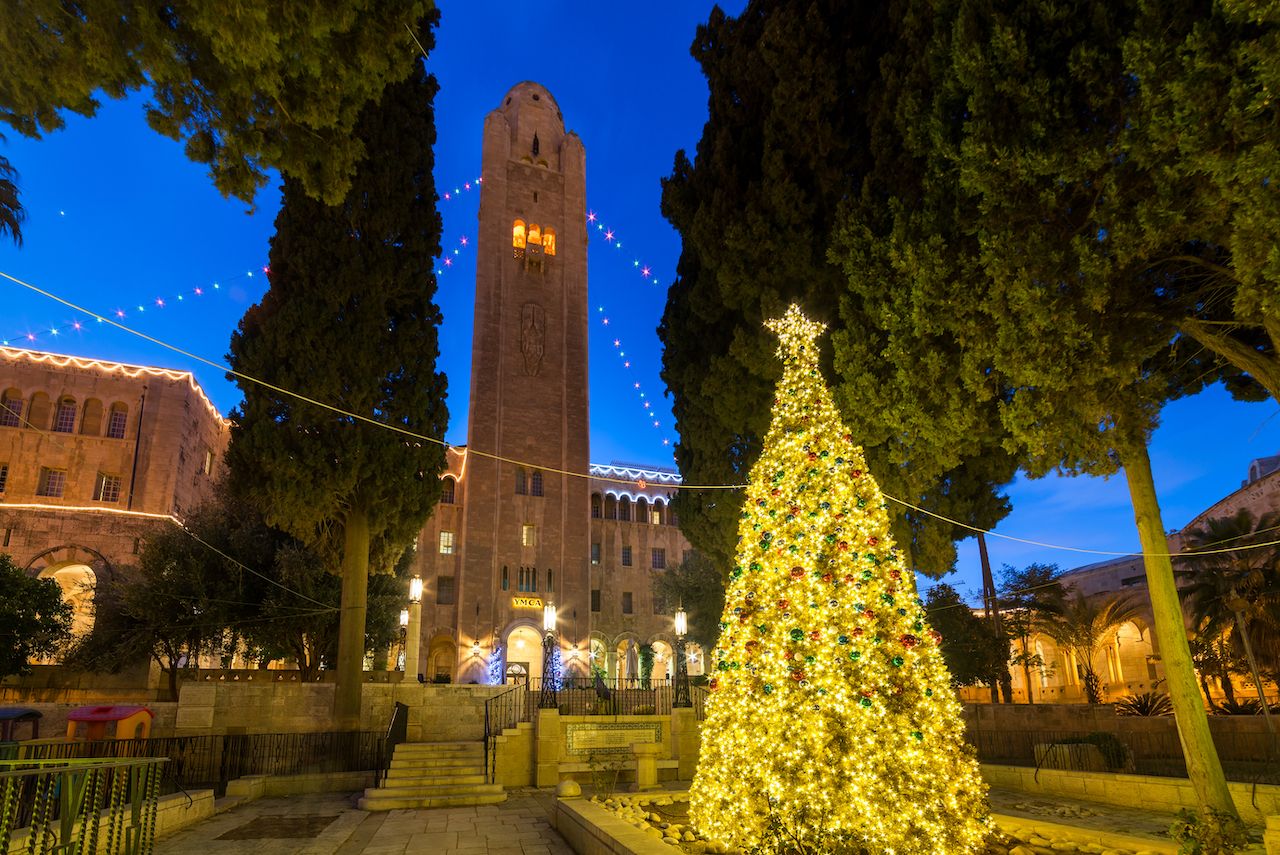 From the Western Wall, it’s a 20-minute walk out of the Old City through the Jaffa Gate to check out the beautiful lights and Christmas tree around the belltower at the Jerusalem International YMCA. On Friday, Saturday, and Sunday, December 6-8, a Christmas market is held there under tents in the beautifully decorated courtyard of the YMCA, where you shop for arts and crafts, clothes, food, drinks, etc. On Christmas Eve, the place has live music from over 80 singers and musicians. For a more spiritual experience, step inside the nearby Anglican Christ Church on Christmas Eve, where you can hear (and join in singing) classic Christmas carols. 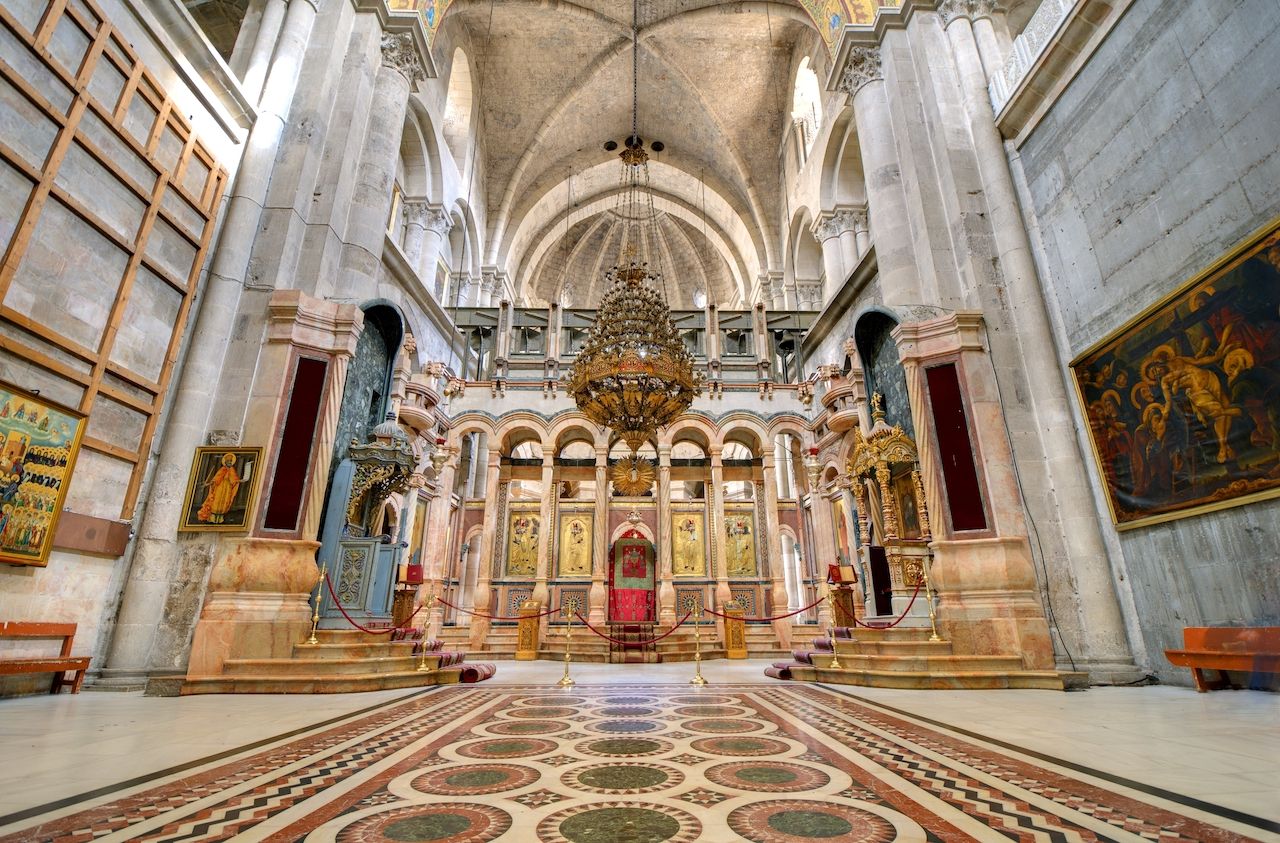 If you are going to Jerusalem for Christmas, you should probably make at least one trip to the holiest site in Christianity, the Church of the Holy Sepulchre, located in the Christian Quarter of Jerusalem. This cavernous church is built on the site where tradition says Jesus was crucified and buried. 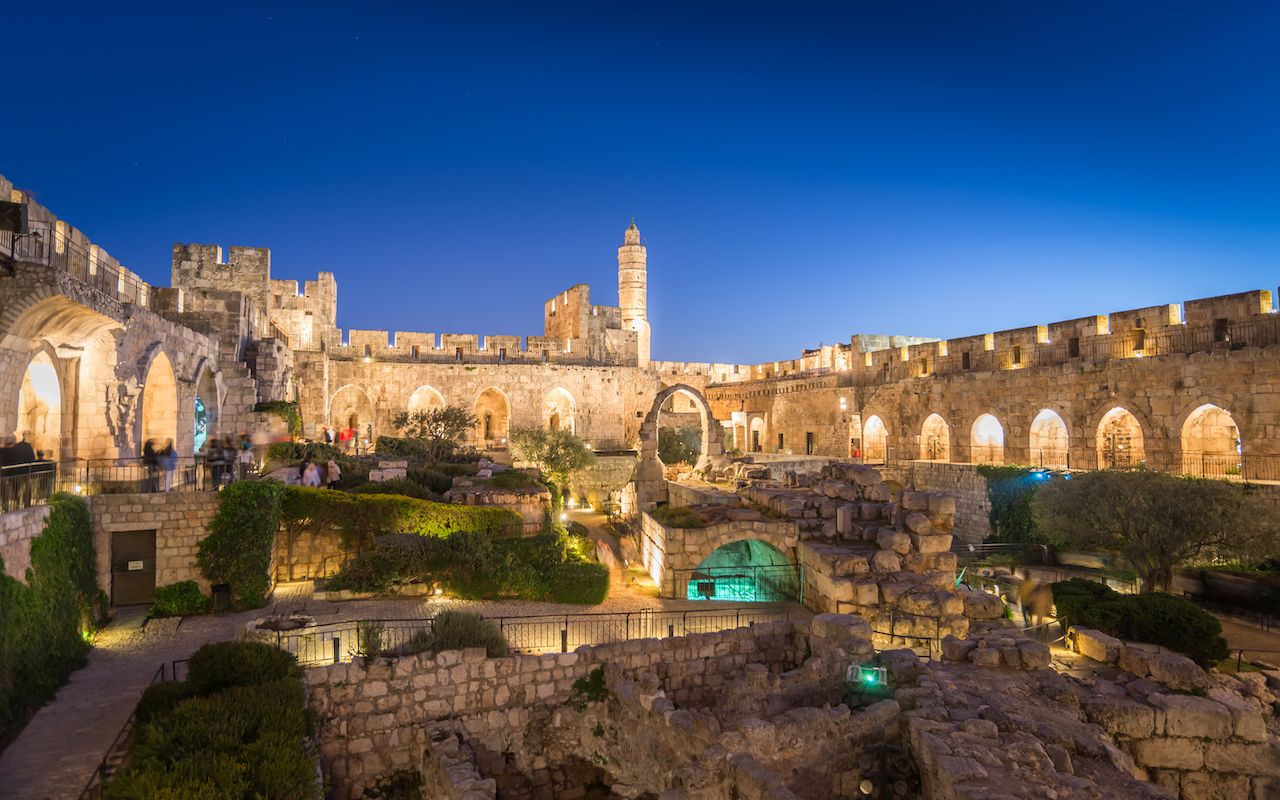 Of course, for every Christmas event there is at least one Hanukkah activity in Jerusalem. Visitors of all faiths will enjoy the lantern tours at the Tower of David, which ends with Hanukkah songs and the eating of sufganiyot (donuts filled with strawberry jam).

For a more educational holiday experience, make sure you save some time for Jerusalem’s Jewish Film Festival, which usually takes place at the start of December. This festival is dedicated to old and new films from around the world that explore themes tied to the Jewish faith, as well as the Jewish experience in Israel and beyond. Attendees will be treated to challenging films about the diaspora, the Holocaust, Israeli culture, and more. 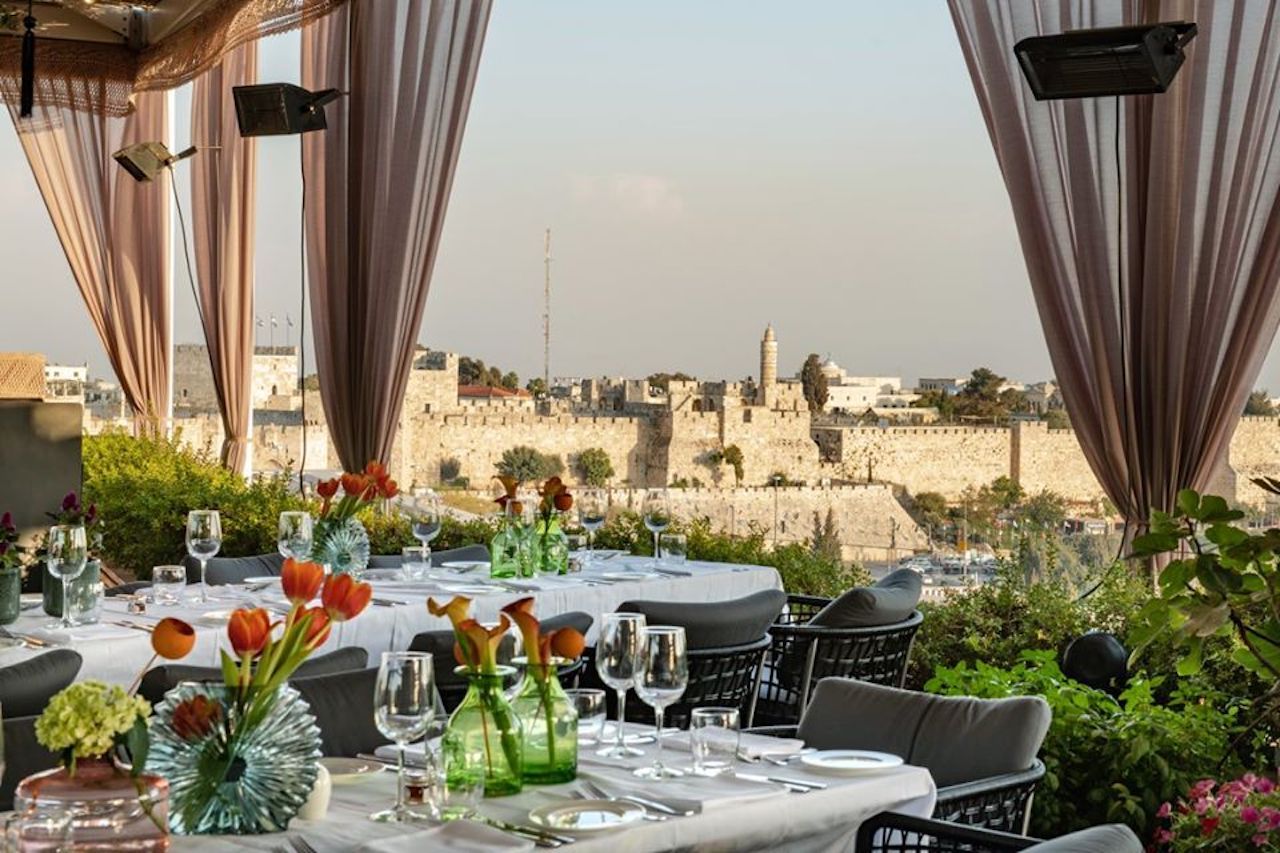 Visit the Downtown Triangle in the newer section of West Jerusalem to get a taste of modern Israeli cuisine. For a high-end experience, check out Rooftop at the Mamilla Hotel, where you can nosh on Israeli interpretations of everything from sashimi to a New York steak while taking in the view of the Tower of David as it glows in the sunset. For a more local experience, go to the Mahane Yehuda Market, which is filled with cheap eats like hummus bowls during the day and micro-bars and nightclubs at night. 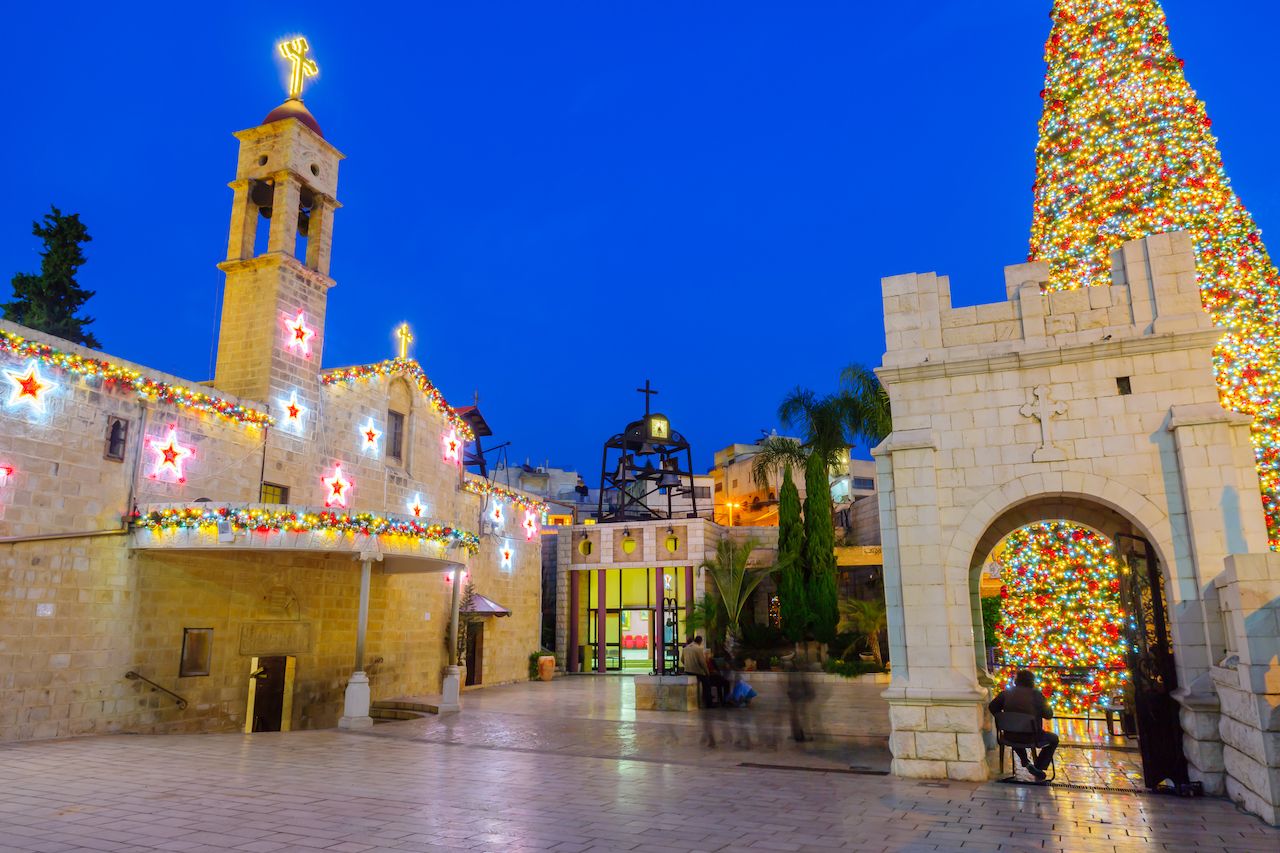 Although a majority Arab and Muslim city, the town where Jesus grew up is home to some of the most spectacular Christmas light decorations and activities. The mountain town of Nazareth goes all out for the holiday. Apart from decorating the main streets with Christmas lights and trees, putting on a firework show, and hosting a parade, Nazareth also hosts a Christmas Market every year. While there, visitors can shop for holiday gifts, listen to live concerts, eat traditional foods, and meet Santa. 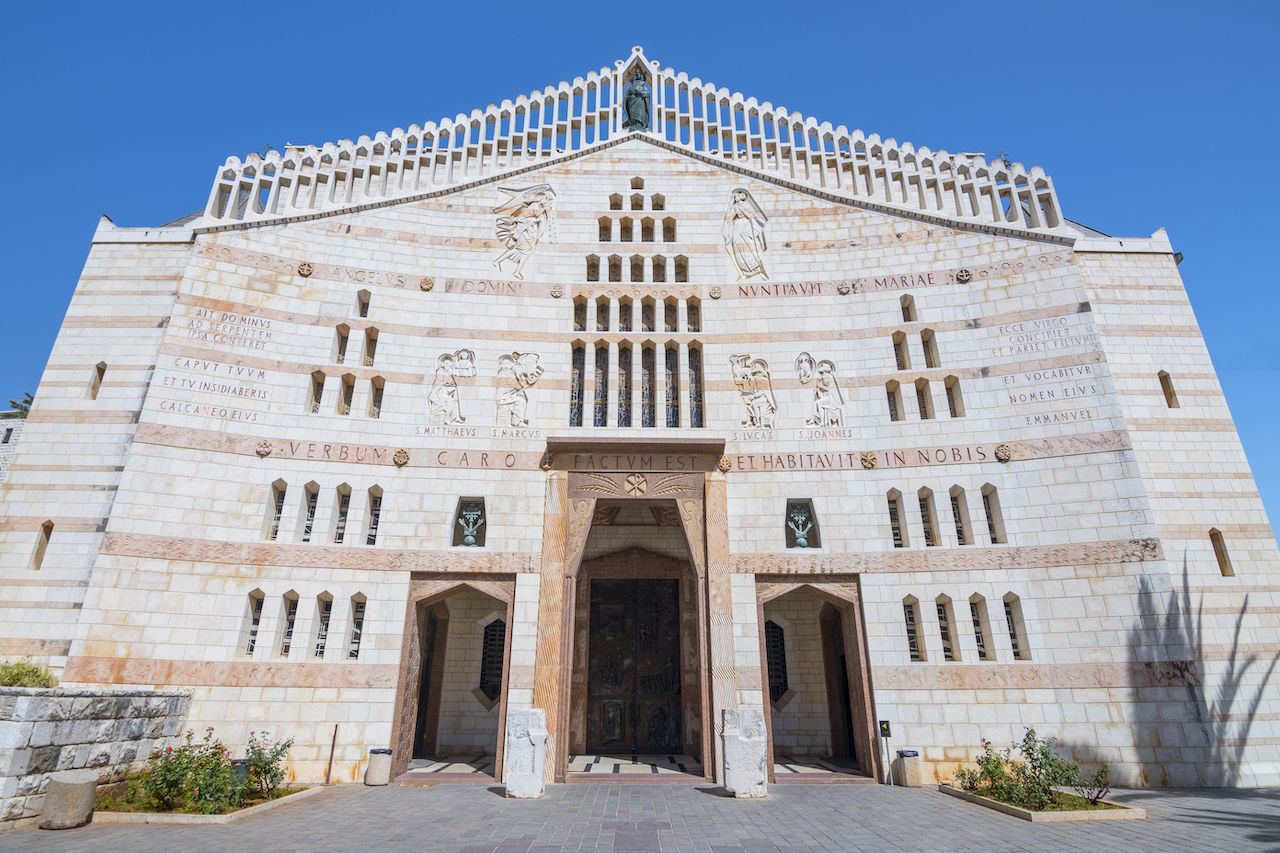 The most important church in Nazareth is the Church of the Annunciation, the site where Christians believe the Archangel Gabriel appeared and told Mary that she would give birth to Jesus. The church, which is a modern Catholic basilica built over a much older Byzantine church, draws thousands of visitors for the Midnight Mass, many of whom wait for hours to visit the grotto where the apparition is said to have taken place. 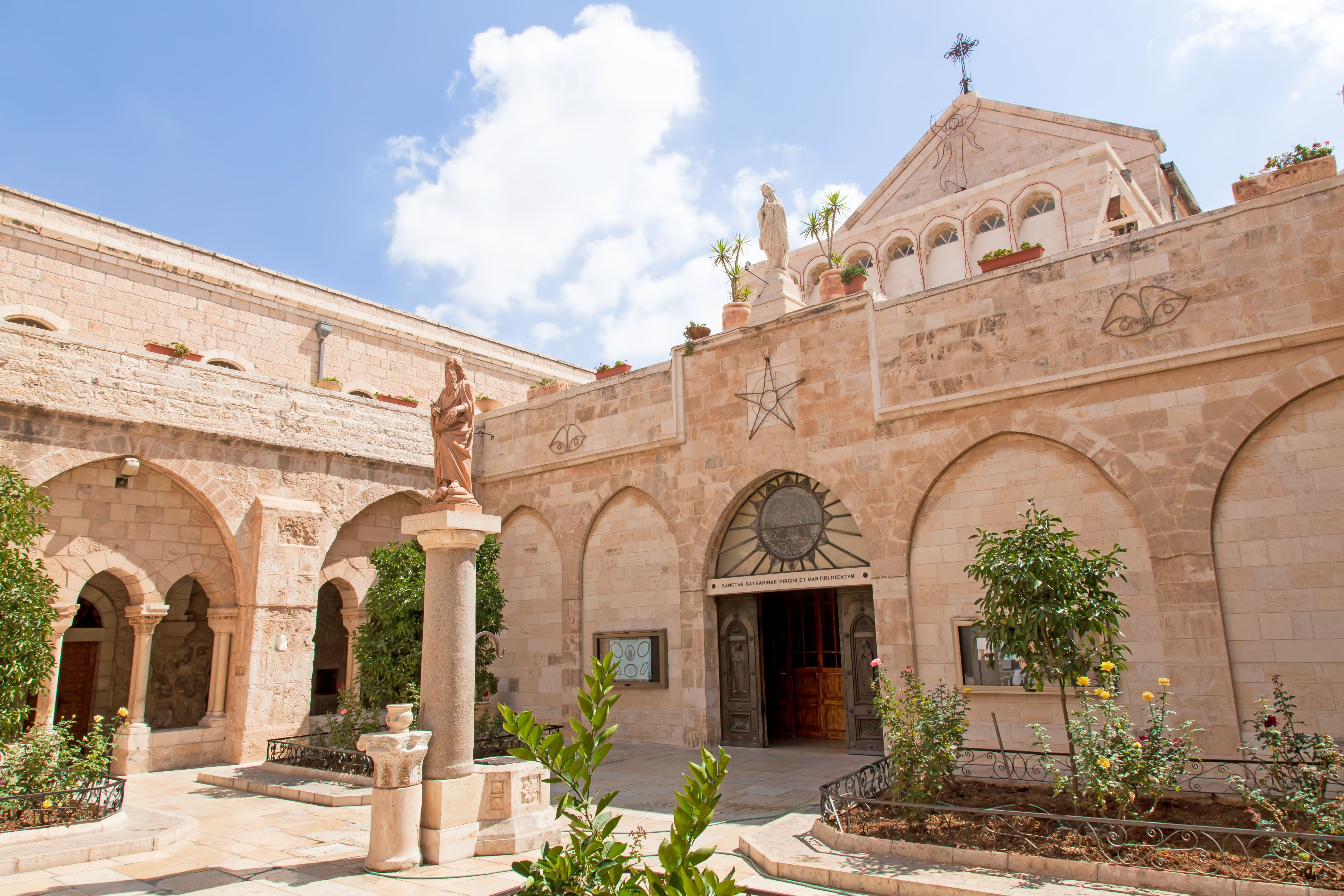 Located in the Palestinian-controlled West Bank, Bethlehem is not technically in Israel but a short bus ride south of Jerusalem. Even non-religious visitors typically begin their visit to Bethlehem with a trip to the Church of the Nativity, the oldest church in daily use in the world. Tradition holds that it sits on the spot where Christ was born. Considering its history, there is probably no better place in the world to spend Christmas Mass than at the Church of the Nativity. 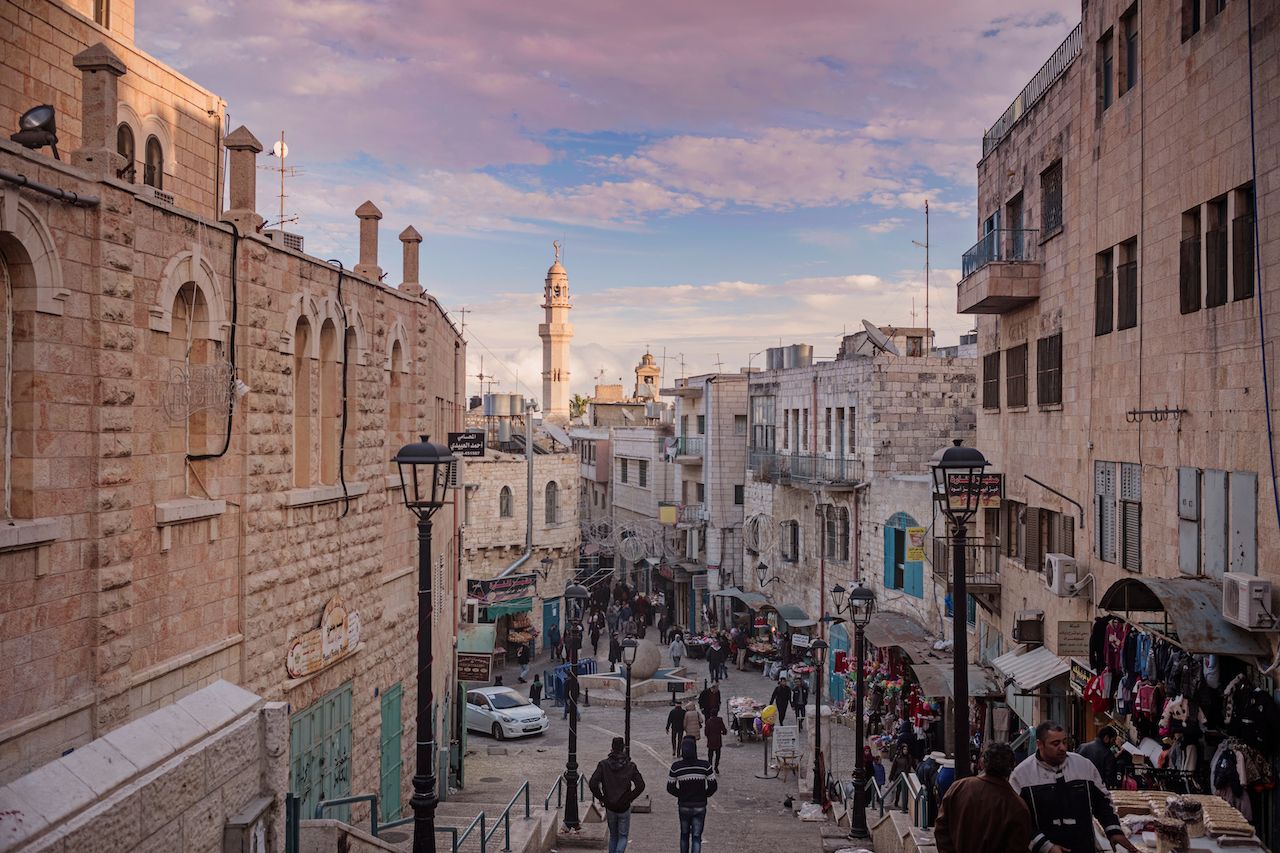 Outside the Church of the Nativity, the hillside town of Bethlehem offers tourists an eclectic web of shopping streets and ancient buildings similar to the Old City of Jerusalem, but it’s typically more open and less overwhelming. Daytime visitors should stop for lunch at one of the many restaurants within a short walk from Manger Square, including Jivana Café, which has a quiet back patio with views overlooking the town.

Note: As the Church of the Nativity is in the Palestinian Territories, visitors may be required to go through a security checkpoint if coming from Israel. 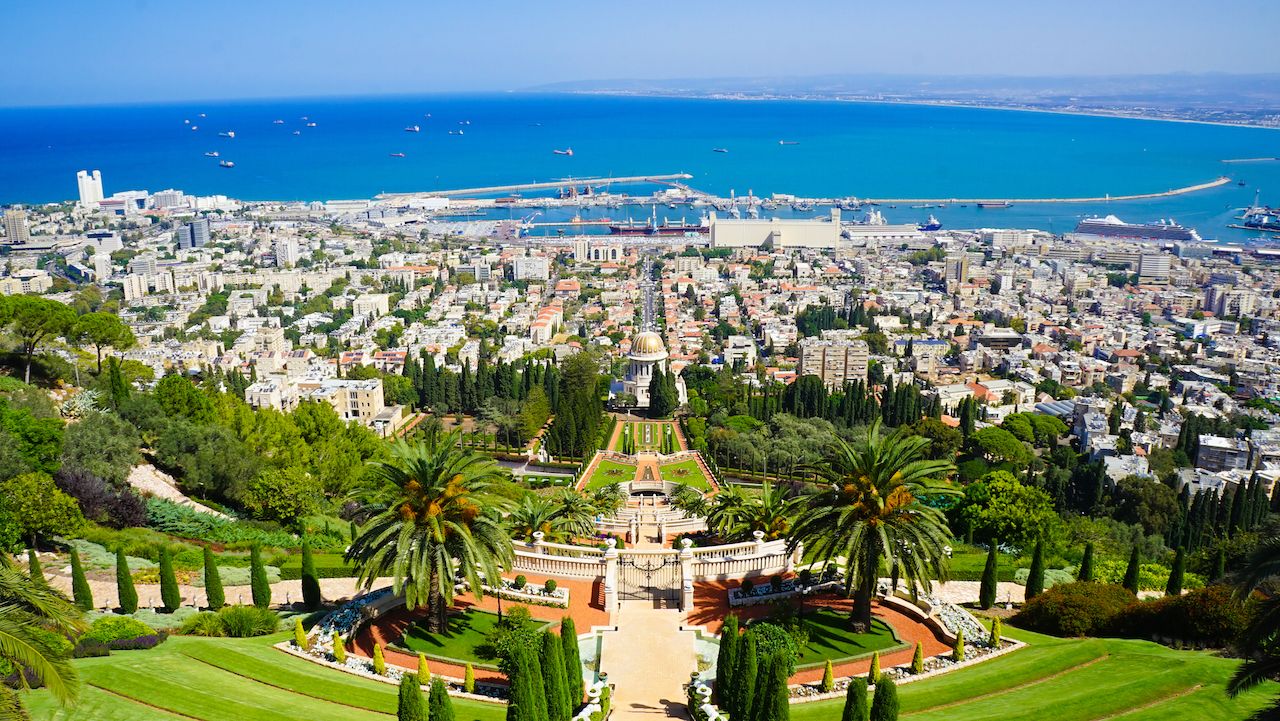 While not the top destination on most people’s list of places to spend Christmas or Hanukkah in Israel, the nation’s third largest city is brimming with its own cultural experiences.

The Holiday of Holidays is a festival that celebrates the three major religions of the region: Christanity, Judaism, and Islam. This year it lasts for more than a week, from December 19 to 28. The purpose of the multicultural festival is to encourage mutual respect and peaceful coexistence between three religious groups that share one home. It does this by bringing out the best food, street celebrations, children’s events, theater, and art shows that the city has to offer.

Haifa is home to the Bahai World Center. Bahai is a monotheistic religion founded in 19th-century Iran that preaches the value of all of the world’s religions. The World Center, located on Mount Carmel, is a defacto headquarters of the religion and home to gardens and a shrine where the remains of Baha’u’llah, the founder of the Bahai Faith are kept. Baha’u’llah died in Acre, where he was imprisoned for two years for starting and spreading a new faith in Islamic Iran. The center overlooks the Bay of Haifa and the Old City of Acre, which alone justify a short visit.

The UNESCO World Heritage city of Acre is on the opposite side of the bay, and just a quick bus ride from Haifa. While not officially a holy site, it is a place of significance for Bahai followers, and the walled city of Acre was an important port for Crusaders making their way across the Mediterranean Sea to reach Jerusalem. The city eventually became one of the first Crusader states in the 12th century AD. Acre is also home to several high-end restaurants that sit on top of the old city walls. Visitors should try to enjoy a dinner paired with Israeli wine at Doniana or El Marsa while watching the sunset over the Mediterranean as the holiday lights of Haifa sparkle in the background. 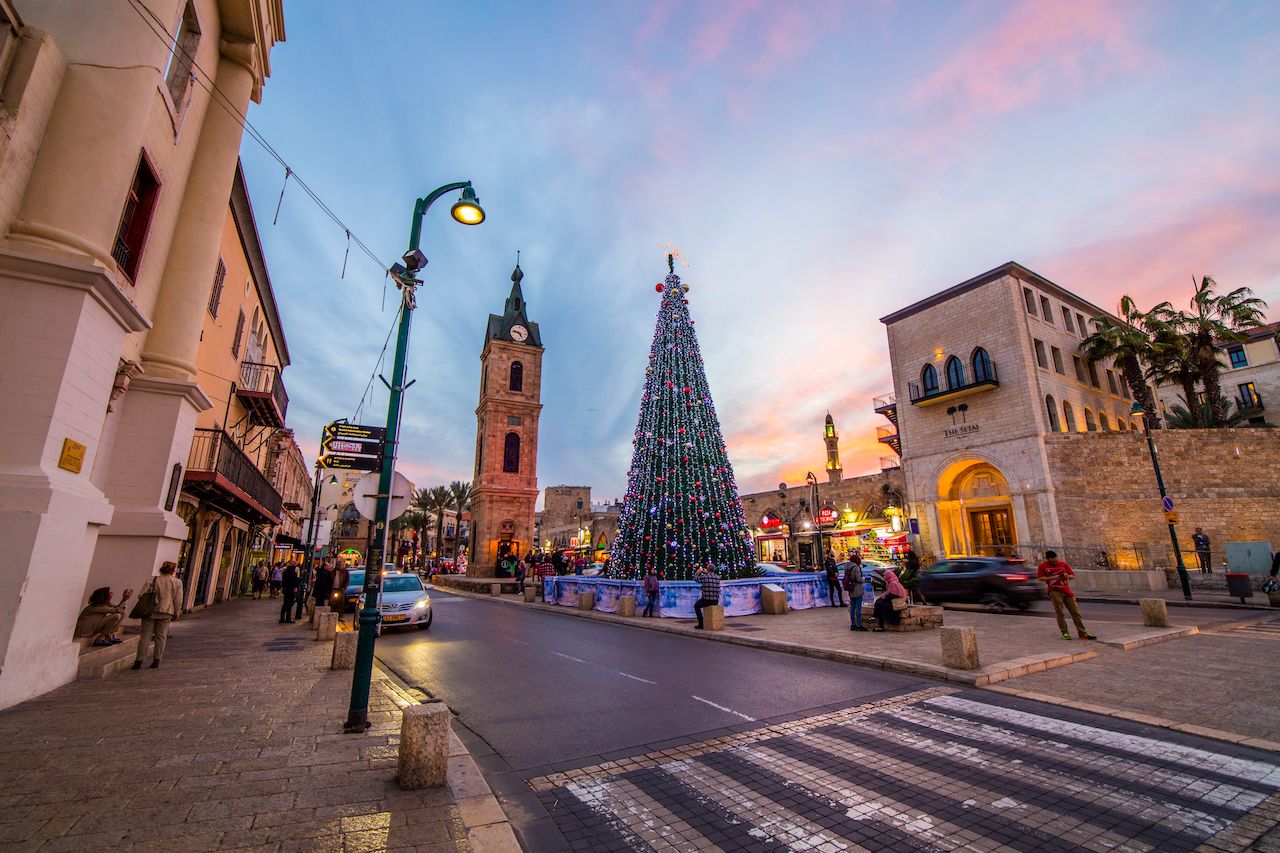 Tel Aviv is often described as the face of modern and secular Israel, but that doesn’t mean Tel Avivians shy away from spiritual celebrations. For a classic twinkling Christmas tree in an ancient setting, go to Jaffa, home to biblical stories, as well as the Greek mythology of Perseus and Andromeda. It’s located in the south of the city. Walk around the neighborhood’s open markets and hidden alleyways, which were once visited by the likes of Jonah and St. Peter, while taking in the street opera performances that happen every Friday during the winter months. 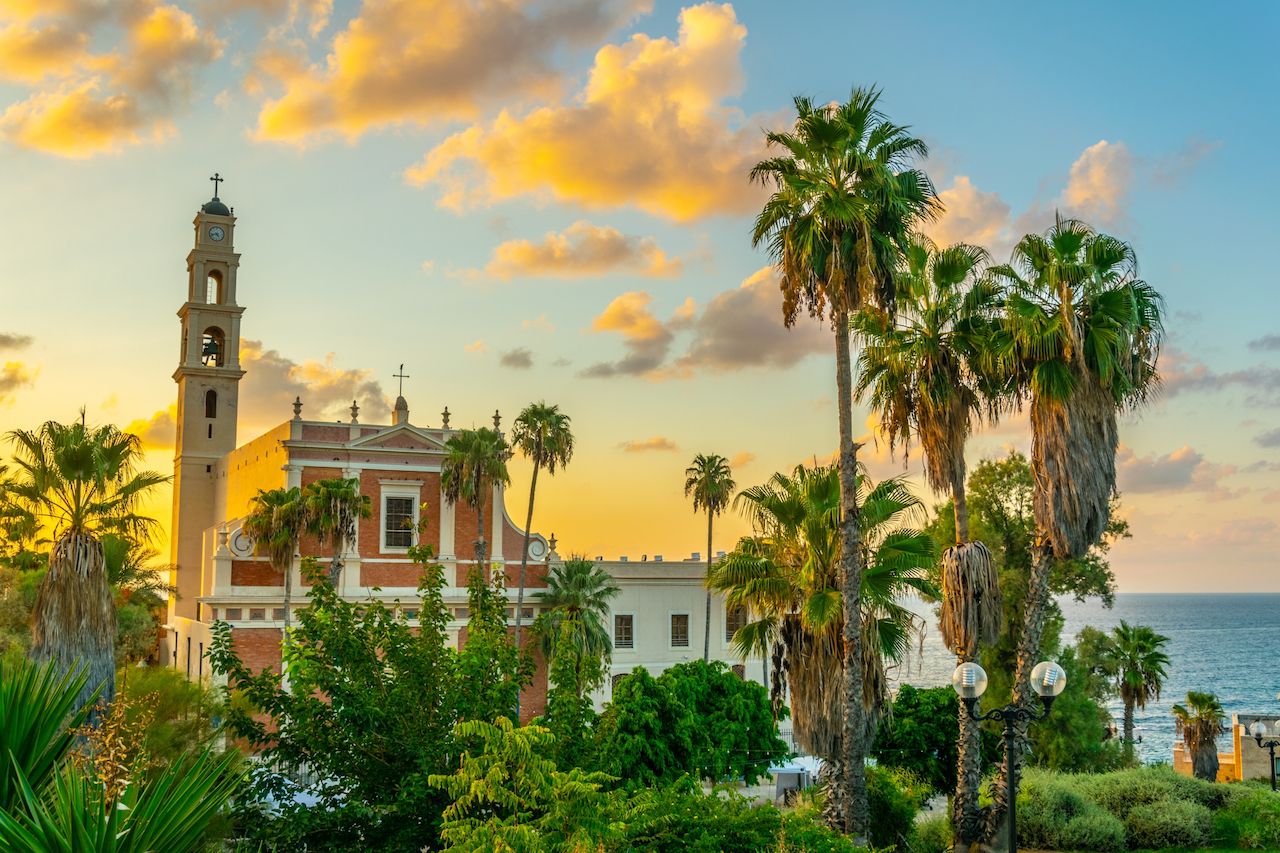 Christian visitors looking for a religious service should attend mass at St. Peter’s Church, which sits at the top of Jaffa’s hill and overlooks the Mediterranean and the Tel Aviv skyline. For a quick bite, go to Abu Hassan, which is perhaps the most famous hummus shop in Israel and located just above the Jaffa harbor.

Many Hanukkah celebrations in Tel Aviv will take place at home, but there is a menorah lighting ceremony at Independence Park, which will take place only a few blocks away from the fancy shops and restaurants on Dizengoff Street on December 22 this year.

Lastly, while most Israelis celebrate the New Year in the fall during Rosh Hashanah, younger Israelis have also begun to throw “Sylvester” parties on December 31. Saint Sylvester was one of the earliest Popes of the Catholic Church and died on December 31. He is also seen as one of most anti-Semitic popes in history, so many younger Israelis celebrate his death while everyone else celebrates the New Year as a bit of dark humor. No Israeli city throws Sylvester parties like Tel Aviv, and you can find several in the city center, including the Sylvester Masquerade on Dizengoff Street and the Glamour Gatsby Party at the Brown Hotel.

Dessert7 Jewish Treats the World Needs To Know About
Tagged
Holidays Trip Planning Israel
What did you think of this story?
Meh
Good
Awesome

8 American Habits I Lost When I Moved To Israel

16 Differences Between a Normal Friend and an Israeli Friend

11 Things I Wish I Knew Before Moving To Tel Aviv

9+ of the Most Peculiar Spots in Israel

10+ Must See Spots in Tel Aviv