One of the most enjoyable parts of the holiday season isn’t gift-getting, gingerbread house-making, or tree-decorating — it’s perusing eye-catching Christmas window displays. This time of year, stores go all out to make sure you’ll check out their wares, even if you never actually set foot inside the store itself. From scenes from Christmas movies to beautiful light displays that will make your jaw drop, here are six of the most amazing Christmas window displays around the world that you should check out this holiday season. 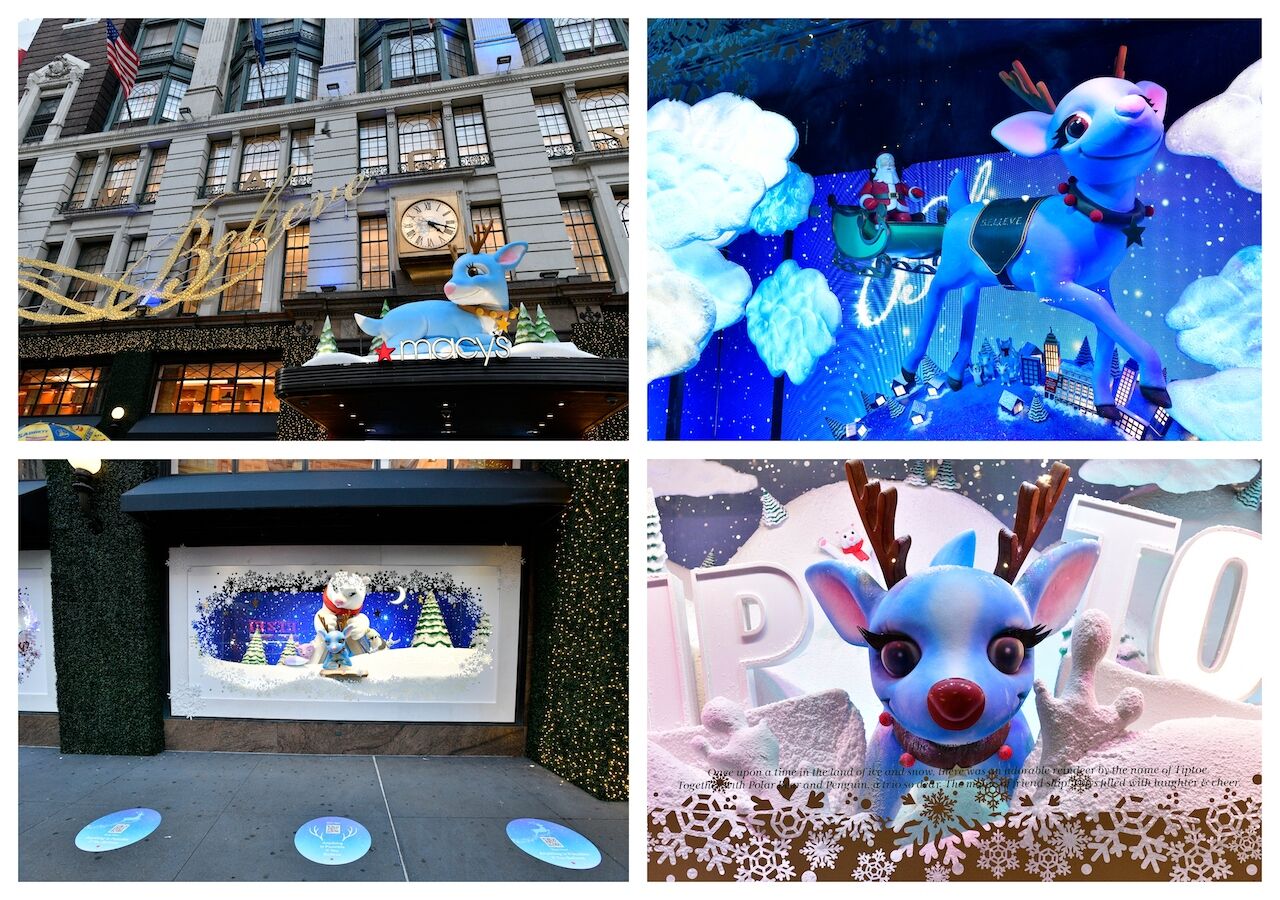 One of New York City’s longest-standing Christmas traditions is the holiday window decorations at Macy’s, and this year, the theme for the six animated and interactive window displays is “Believe”. The star of the Christmas window displays, and the rest of the store’s facade, is Tiptoe, an adorable deer whose dream is joining Santa’s team. Check out all the window one by one to take in Tiptoe’s story as she goes to flight school and studies to achieve her goal. Thanks to the support of all her friends and her hard world she finally gains the self-confidence she needed to fly with Santa’s wonderful crew this Christmas. Macy’s Herald Square’s holiday windows can be seen on the Broadway side of the flagship store until January 1, 2022. 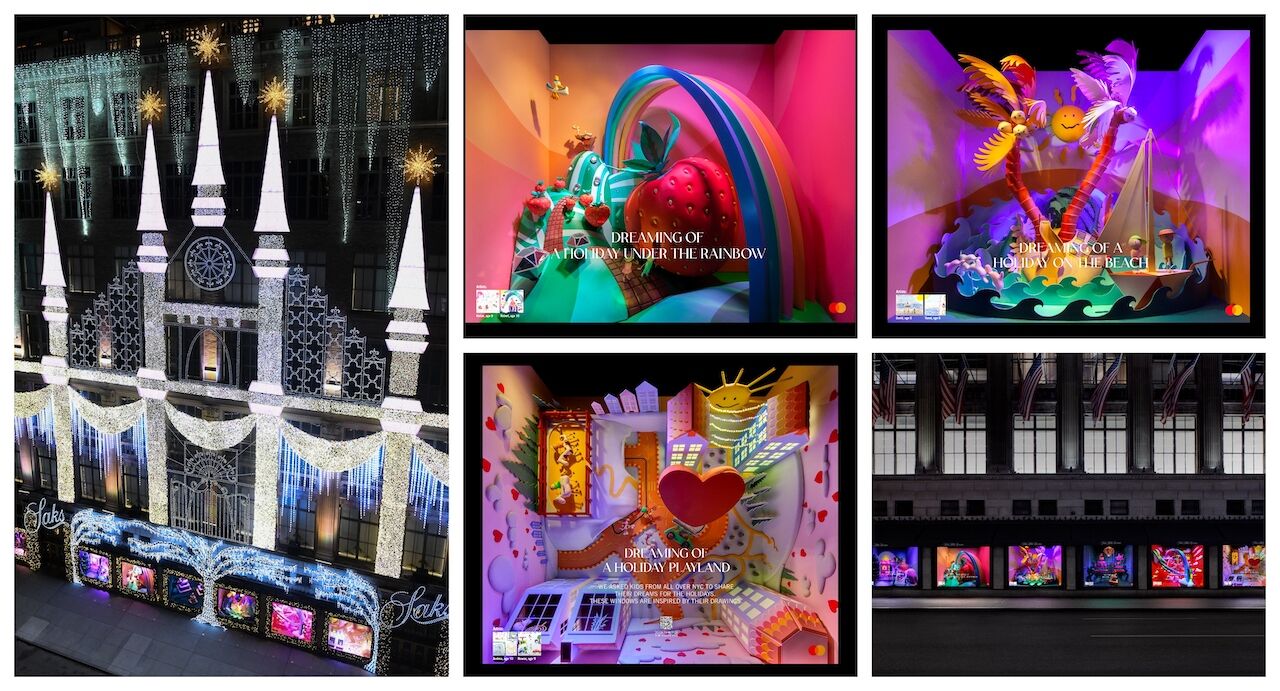 This year, Saks Fifth Avenue’s windows are decorated on the theme of reconnecting with family and loved ones during the holiday season. The six windows in the center of the store’s facade have been directly inspired by the responses of New York children who were asked to draw and describe what they dream of doing with loved ones for the holidays. The result is vibrant diplays featuring scenes of holidays on the beach, holidays under the rainbow, and sweet holidays at home, and more.

Of course, this year, like every year, Saks’ amazing light and music show, including 700,000 programmed LED lights on the ten-story-tall facade of the building, will be on display until January 4, 2022. 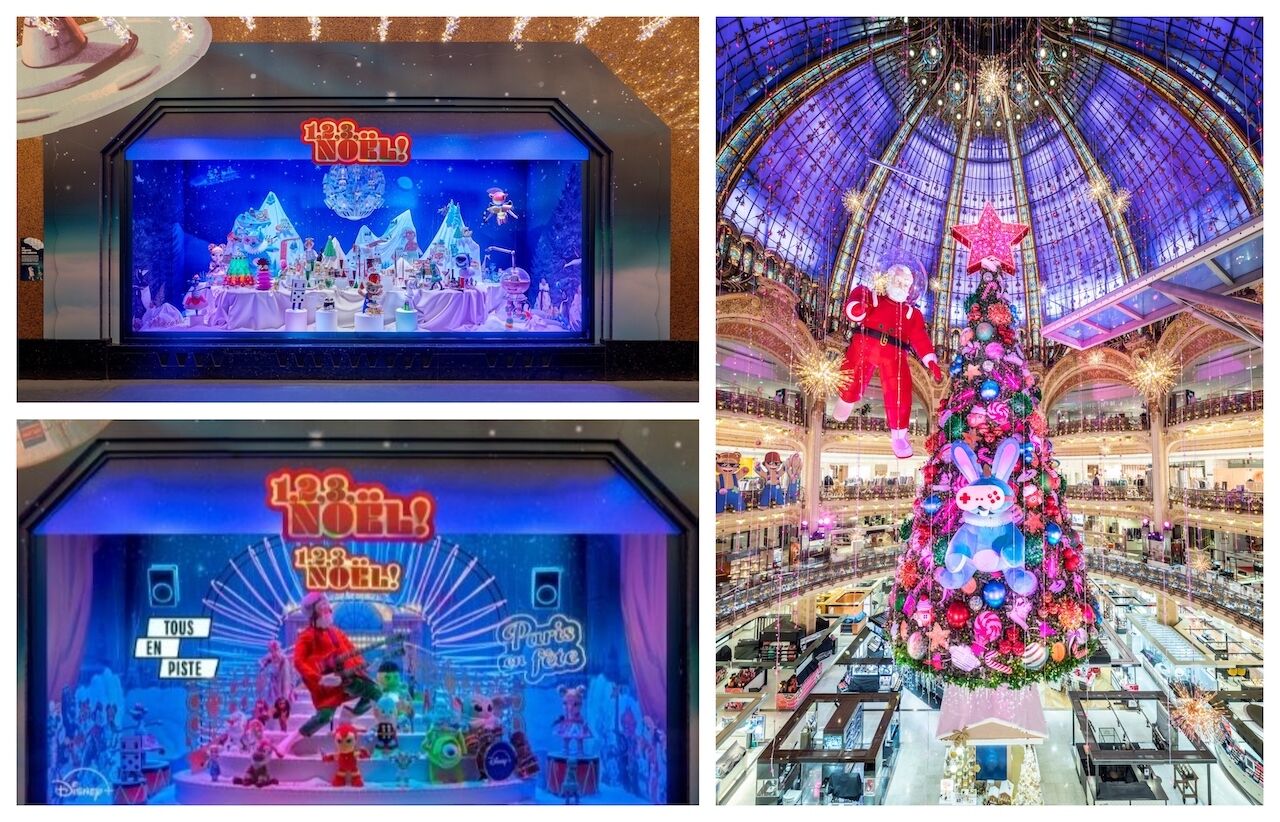 The Galeries Lafayette is well-known for its architectural details that makes the department store gorgeous year-round, but, every year, the beauty of the decor kicks up a notch with the holiday season. This year’s theme for the Galeries’ Christmas ornamentation is a surrealistic Christmas tale titled “1, 2, 3, NOËL”. The 11 Christmas window displays are filled with a mix of vintage and futuristic automatons and gifts, and each window illustrates one part of the story.

Inside the store, a four-story Christmas tree is placed under the cupola alongside a floating astronaut Santa and a futuristic toy rabbit. The tree is crowned with large pink star and filled with superb and colorful ornaments. Every 30 minutes, the stores goes dark and visitors can enjoy sound and light show.

This year, for the first time in the history of the store, the ornaments (all handmade) from the Christmas window displays and the Christmas tree are for sale. The proceeds from this sale will go to a charity helping hospitalized children and teenagers. 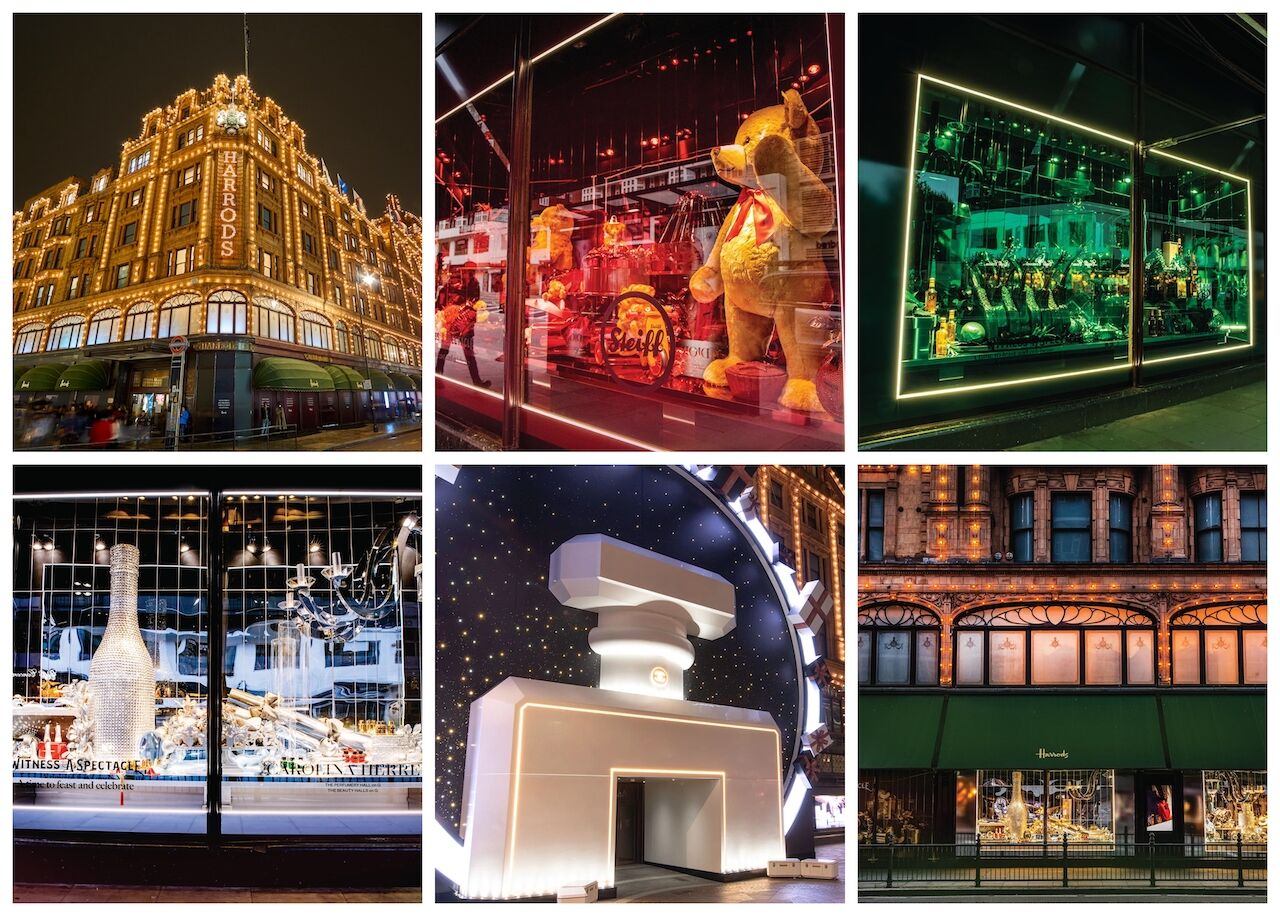 Being London’s most famous department store, expectations are high for Harrods when it comes to holiday decorations. This year, the store’s theme for its Christmas window displays is that of a holiday feast, with nine ground-floor windows designed to look like one long and lavish dining table that stretches along Brompton Road. The “table” bears luxurious Christmas feast items including a bottle of bubbly covered in gems, chrome-color crackers, gooey Christmas puddings, and a rack of lamb paired with whiskey bottles. All nine windows are lit in holiday-appropriate colors such as green, red, and silver, and are extravagantly decorated with sparkles and mirrors.

This year, Harrods has also dedicated five of its windows and its Door Five entrance to the 100 year anniversary of the famous Chanel N°5 fragrance. And if you manage to find and keep good count of all the miniature N°5 bottles hidden in the five windows, you’ll receive a gift at the store’s CHANEL beauty counter.

Harrods holiday windows can be seen until early January 2022. 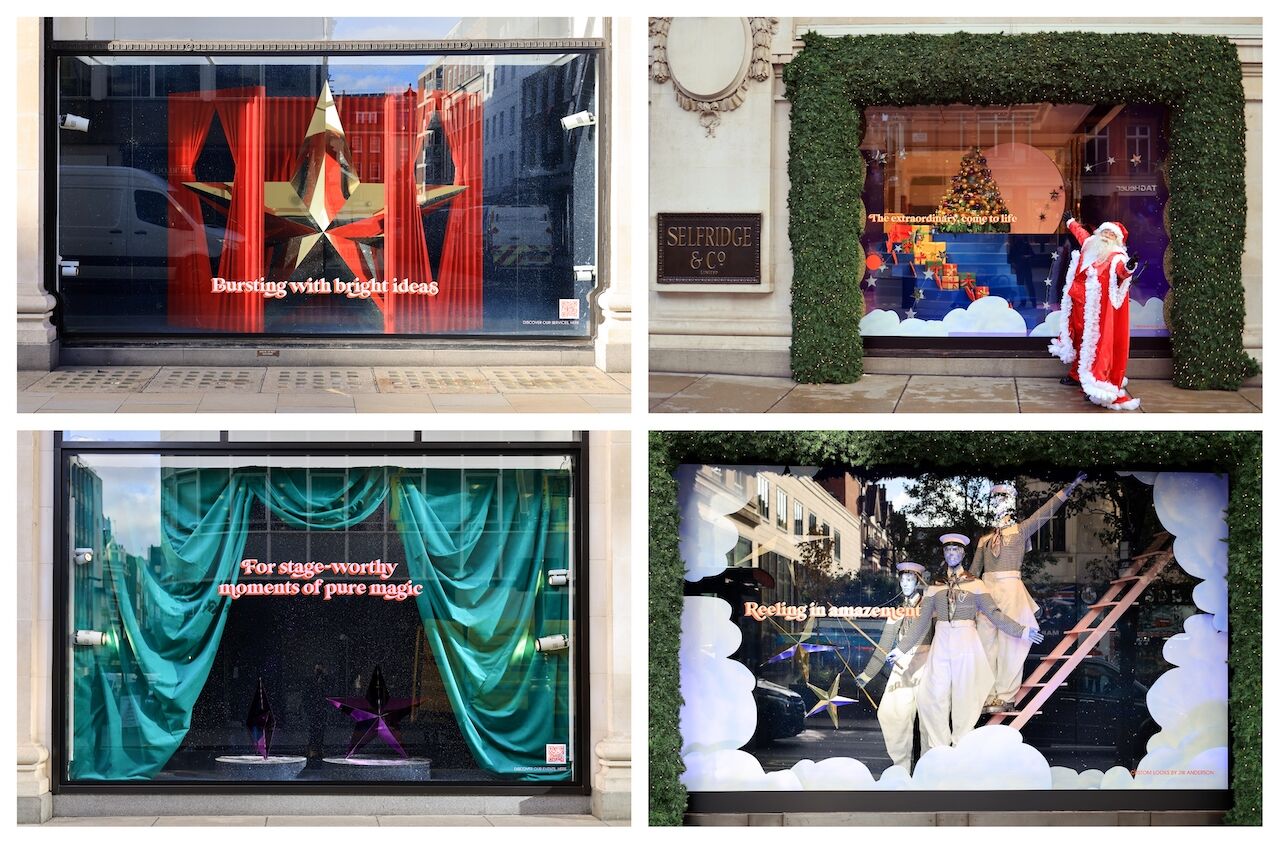 This year, the theme of Selfridges’ Christmas window displays is “Christmas of Dreams”. After two difficult years in the English capital, the department store is inspiring shoppers to make the most of the magic of the holidays with minimalistic and dream-like scenes set up in its windows for everyone to see.

This year, for the second year in a row, Selfridges has organized a Christmas Market filled with local food vendors, artisans, and even Santa and his elves. Selfridges’s Christmas market stretches along the whole of Edward Mews and takes place daily until December 24. 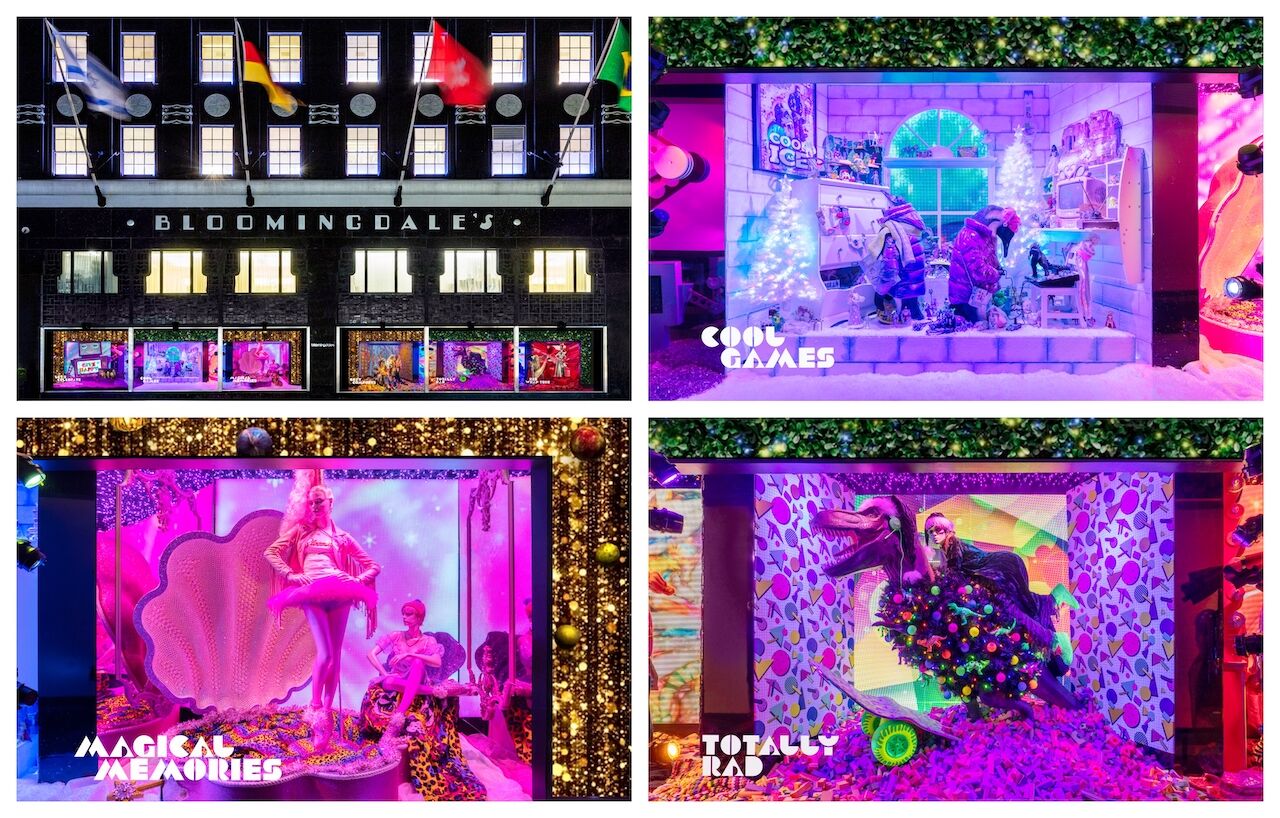 Bloomingdale’s on Lexington Avenue between 59th and 60th streets in New York City always has an impressive window display, and this year the store is continuing its tradition. Six windows decorated on the theme “Give Happy” brighten up the store with beautiful scenes. One shows a penguin family in its igloo home, all dressed in fashionable attires; another is a modern take on a music box, with a spinning figure emerging from a seashell. But our favorite is window five and its strange hybrid Christmas tree-dinosaur that’s riding a skateboard.

A version of this article was previously published on December 5, 2019, and was updated on December 7, 2021, with more information.

Holidays15 European Christmas Markets You Need To Go To This Holiday Season
Tagged
Art + Architecture Holidays
What did you think of this story?
Meh
Good
Awesome