One of Madrid’s most typical dishes, if not the most typical, is a hot one. It’s easy to think about sun and hot weather when thinking about Madrid, and that isn’t wrong, but in winter the city can get chilly (relatively, at least, with temperatures in the 30-, 40-, and 50-degree Fahrenheit range). It’s on these days that the classic Madrilenian stew hits home as an important part of Madrid’s gastronomy.

Cocido madrileño (literally “Madrid stew”) is a three-course meal of soup, chickpeas, and vegetables and meats. The name alone doesn’t define what gets thrown in the mix. Chickpeas are essential. Potatoes, carrots, and cabbage are usually added, but sometimes leeks, turnips, and green beans are included, as well. Pork is the typical meat (chorizo; tocino, or bacon; and morcilla, or blood sausage, are common), but some people add chicken or beef. It’s a dish regularly served at family gatherings and on special occasions but is also on the menu at restaurants.

While the ingredients vary depending on who’s making it, cocido madrileño is always a filling meal. 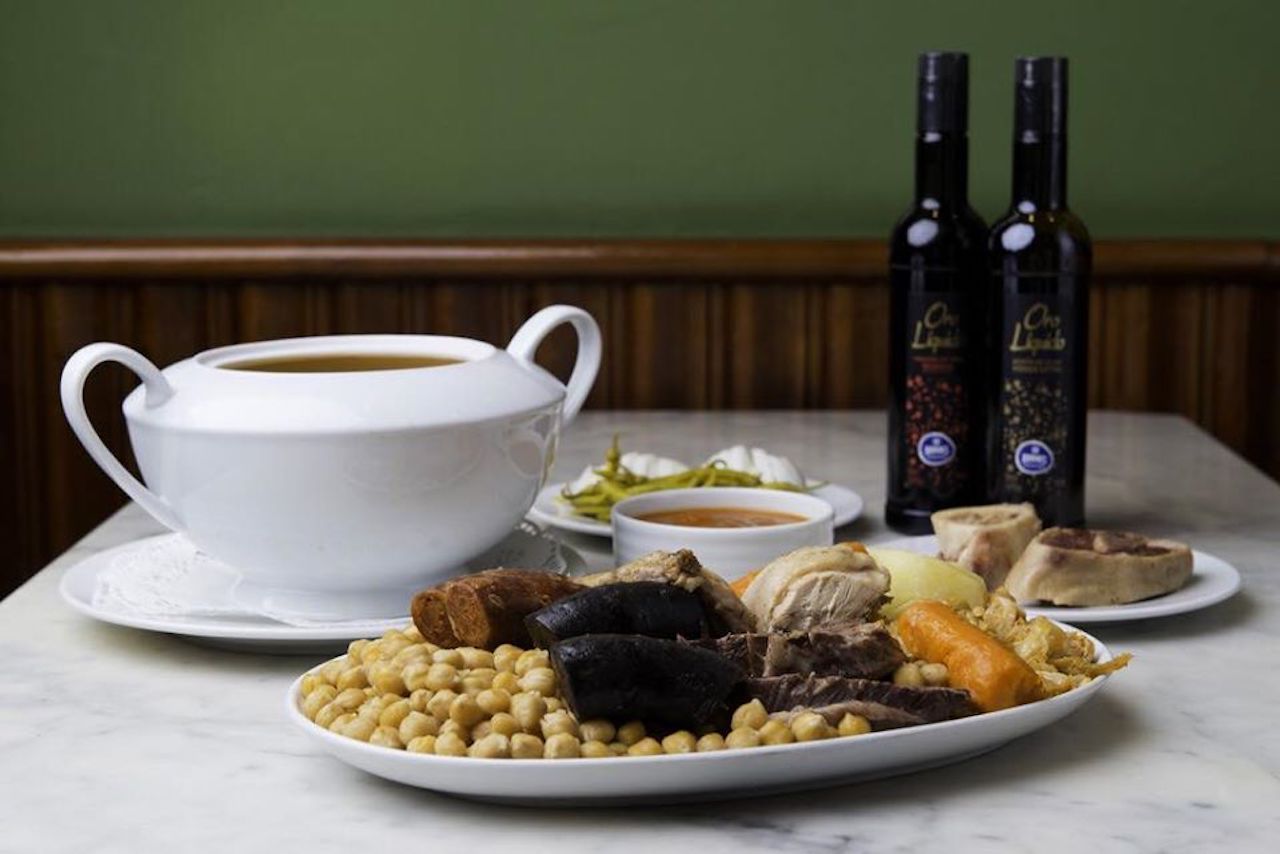 There’s not a single origin story for cocido madrileño, but it’s believed that the roots for the dish are ancient. Many historians trace the stew back to adafina, which is a traditional Sephardic Jewish dish cooked on Fridays and eaten the following day on the Sabbath. Adafina also has chickpeas as the main ingredient, accompanied by vegetables and lamb. The ingredients slowly cook together in a clay pot, allowing the household to observe the Sabbath when it’s forbidden to work. During the Spanish Inquisition in the late 1400s, Jews were forced to either convert to Catholicism or leave the country. Those who remained had to prove their conversion, and eating ingredients prohibited by Judaism like pork and blood sausage was one way to do so.

Other experts posit that cocido madrileño is the evolution of olla podrida (literally “rotten pot,” similar to France’s pot pourri, or “putrid pot”). Olla podrida was popular around the 16th century when the stews were commonly called pots because of the dish they were made in. Olla podrida is made with a base of beans or chickpeas that’s slowly cooked with vegetables and meat, which was typically pork though the recipes for olla podrida varied throughout Spain. It should be noted that olla podrida was typically a lower-class dish made with meat and vegetable leftovers or trimmings. Like cocido madrileño, the broth was usually served before the meat and vegetables. Over time, the word cocido (stew) took the place of olla (pot).

Today, cocido madrileño is the most typical dish in Madrid with a uniform recipe (with the exception of slight cook-by-cook variations). It’s said that it’s a meal en tres vuelcos, or “in three turns,” in reference to the three servings. First, there’s the broth the ingredients have been prepared in, which is usually served as a soup and sometimes includes noodles. Then there’s the chickpeas, vegetables, and potatoes. Finally, there’s the meat. Though this is the most traditional, it’s not always served this way. Depending on the family or person eating, the cocido could also be eaten all at once, by combining the soup and chickpeas, by combining the meat and vegetables, or by any other possible combination. 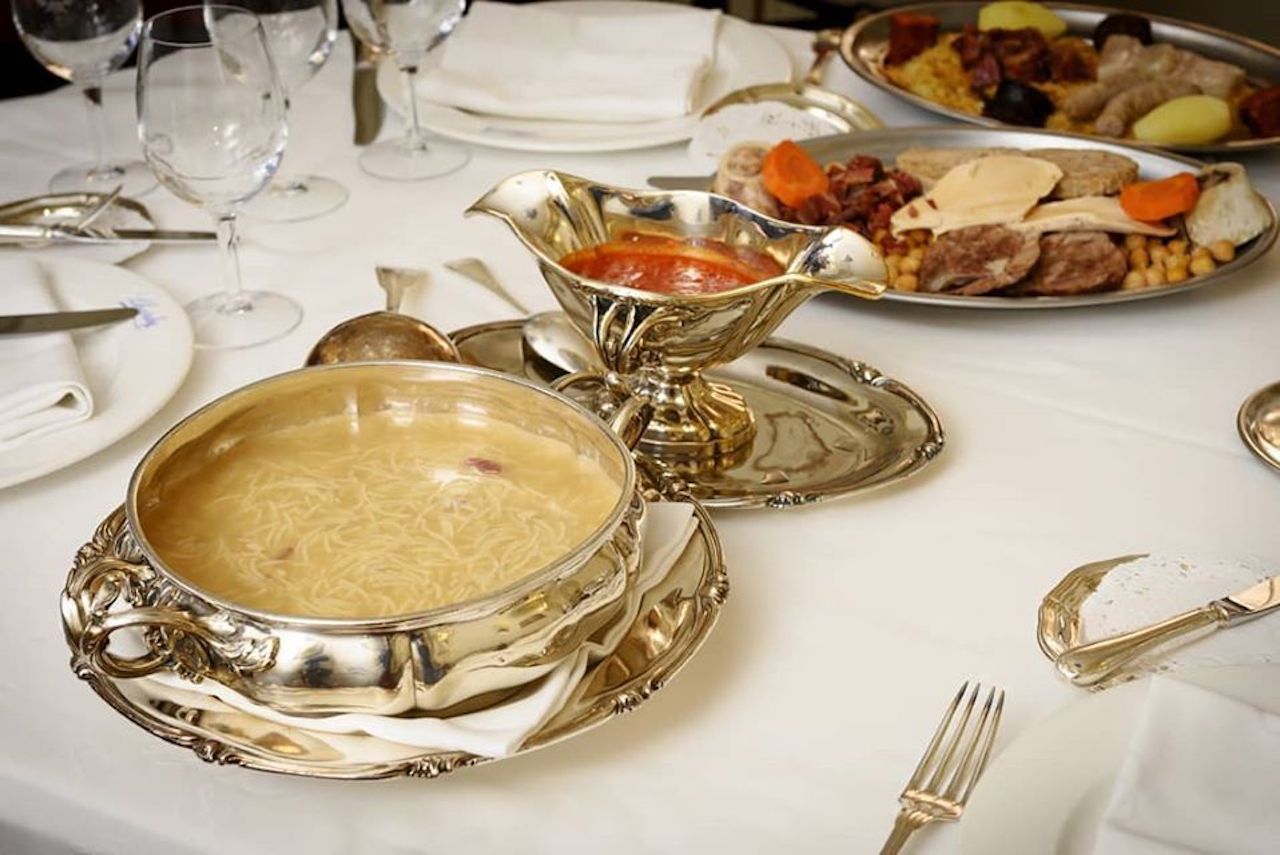 Because it’s a hot dish, cocido madrileño has always been served in winter. Yet, given its modern popularity, it’s now possible to find it in many restaurants around the city year-round (yes, including the scorching hot summers). Regardless of what time of the year you visit, don’t leave without trying some for yourself.

Where to try cocido madrileño

Lhardy $$$: Open since 1839, Lhardy has upscale tapas downstairs and a formal dining area upstairs. It’s a longstanding classic in the city, with cocido madrileño at its heart.

Malacatín $$: This restaurant opened in 1895, and today, it specializes in wine, tapas, and cocido madrileño. It’s known for using top ingredients in its stew, which is served in generous portions.

Cruz Blanca de Vallecas $$: A cherished restaurant with a long list of accolades. Expect a waitlist (it’s best to make a reservation long before planning your trip to Madrid), but it’s worth it for the cocido madrileño alone.

6 Essential Tapas Bars You Have To Try in Madrid, Spain

The 5 Best Food Markets in Madrid

If You Only Go To One Neighborhood in Madrid To Eat, Make It Malasaña

Where To Eat and Drink at Madrid’s Barajas Airport

11 Awesome Things To Do in Madrid for Free