As the engine of the Panga boat roared over the Pacific Ocean swells, we traced Panama’s coastline, where volcanic rock cliffs gave way to secluded beaches backed by dense jungle. With every coastal bend, I expected to see a towering hotel, a small town, or even just a few houses on the beach. But I never did.

I had originally come to Panama to surf, but instead we were headed to a place even more rugged and wild than the coast I was observing: Coiba Island. Coiba is a national park and nature preserve whose unique history has allowed it to evolve into a haven for a diverse array of wildlife, some of which exist exclusively on the island. Coiba Island seems to exist in another world, one untouched by humans and full of natural wonder, rugged nature, and thriving wildlife — both above and below the water. 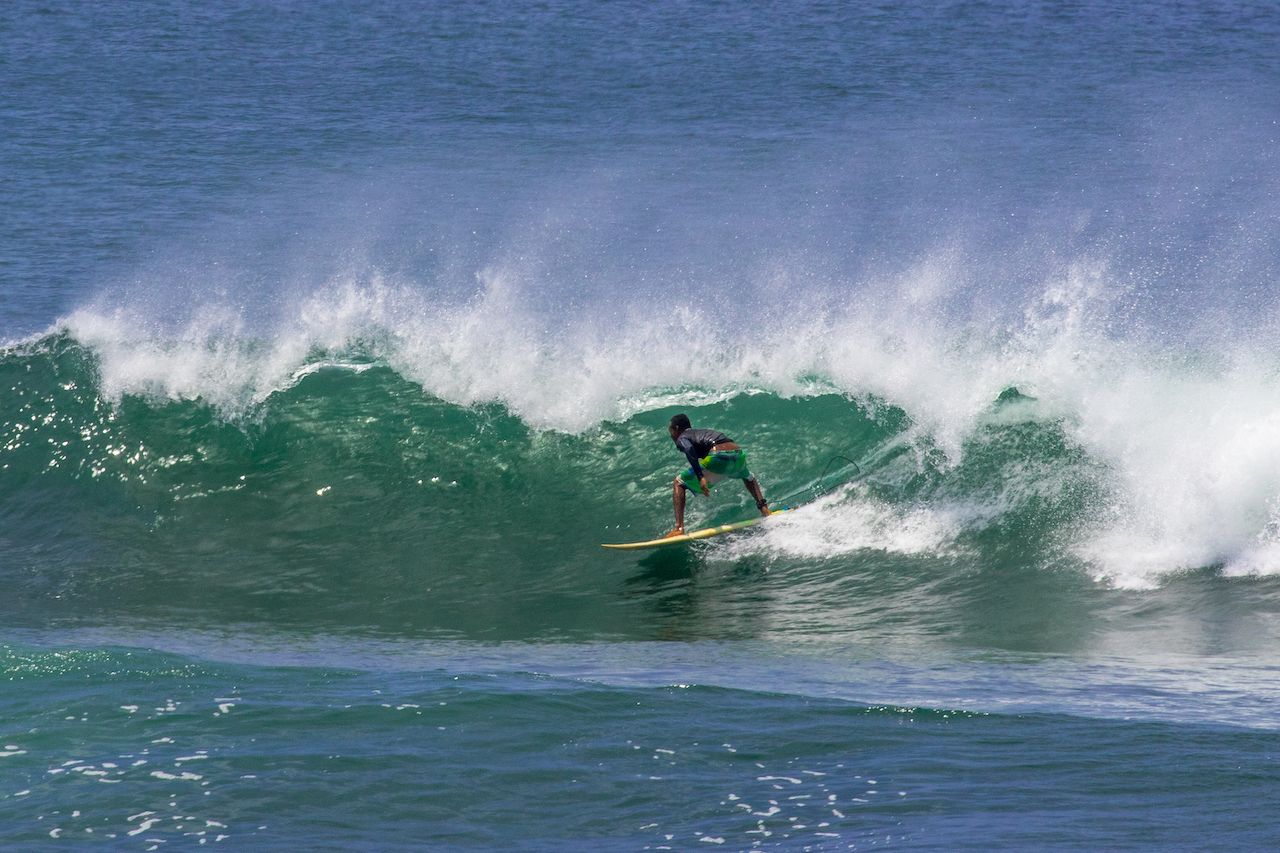 Although Panama connects Central America to South America, it runs west to east — so western Panama is sometimes thought of as northern Panama, since it’s the part of the country closer to North America. The Panama Canal lies just inside the eastern half of the country, closer to Colombia than to Costa Rica.

On the country’s western end, the Pacific Ocean’s coastal highway stops at Santa Catalina. To continue westward from there requires backtracking nearly 50 miles from the coast to reach a major highway. I was in Santa Catalina, staying at the Thunderbomb Surf Camp, to surf the iconic right-hand point break.

One day, I’d taken off on an overhead right-hand wave and ridden it much farther than I’d expected to, deep into the channel. Just as I’d begun my paddle back to the lineup, an even bigger set had appeared on the horizon. Unlike the wave I’d taken off on, the oncoming waves were massive, shoulderless walls of water closing out in front of me. Diving underneath the first one, I’d gotten pinned against the rocks on the seafloor and then washed toward the toothed shoreline. Both board and I had tumbled over the rocks until we’d come to a rest on an exposed part of the reef. While I was fairly cut up but otherwise okay, my board had several punctures and a buckled tail. It was no longer rideable.

The next day I’d wandered through the streets of Santa Catalina, wondering what to do with my remaining time in Panama. I’d come across the Panama Dive Center, the seemingly best of the dozen or so dive shops along the main road of Santa Catalina, and decided now would be as good a time as any to get my scuba certification. I’d had no idea that our dive site, Coiba Island, was globally renowned for its flourishing marine life. Divers from all over the world travel to Santa Catalina for its proximity to Isla Coiba. 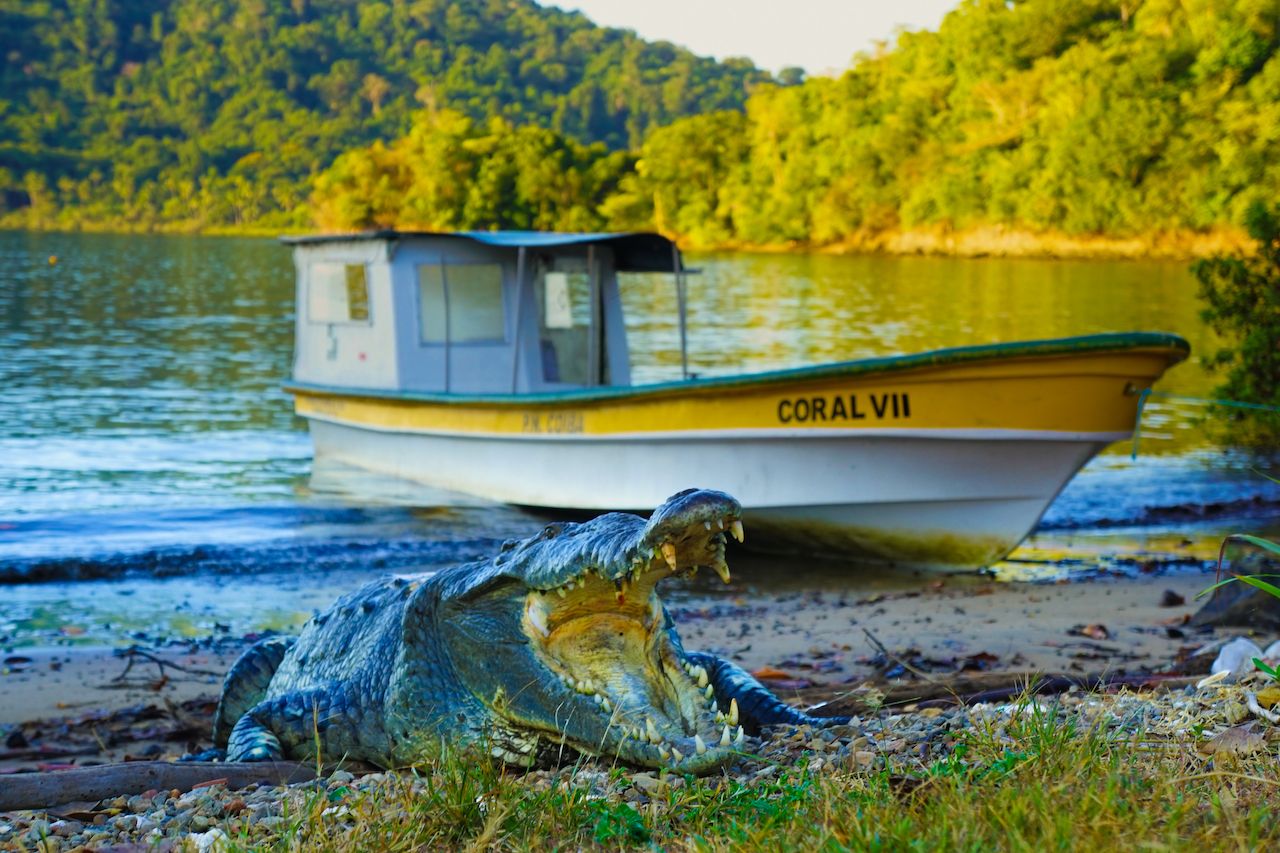 Isla Coiba hasn’t always been a flourishing dive site. For decades the island served as a penal colony for Panama’s most dangerous prisoners. Founded in 1919, and shut down almost 90 years later in 2004, the island prison once held as many as 3,000 prisoners in 30 scattered camps across the island. Coiba’s penal colony housed political prisoners of dictators Omar Torrijos and Manuel Noriega. It was during this time that the island’s name became synonymous with cruelty, torture, and death.

“Los Desaparecidos” was the title given to the hundreds, if not thousands, of prisoners who disappeared during their sentences, who now most likely occupy the thousands of unmarked graves on the island. After the dictatorships, Coiba became a criminal prison where society’s worst farmed and ranched Coiba to provide for their existence on the island. Due to Coiba’s limited contact with the outside world, the nature on the island flourished during its dark history. 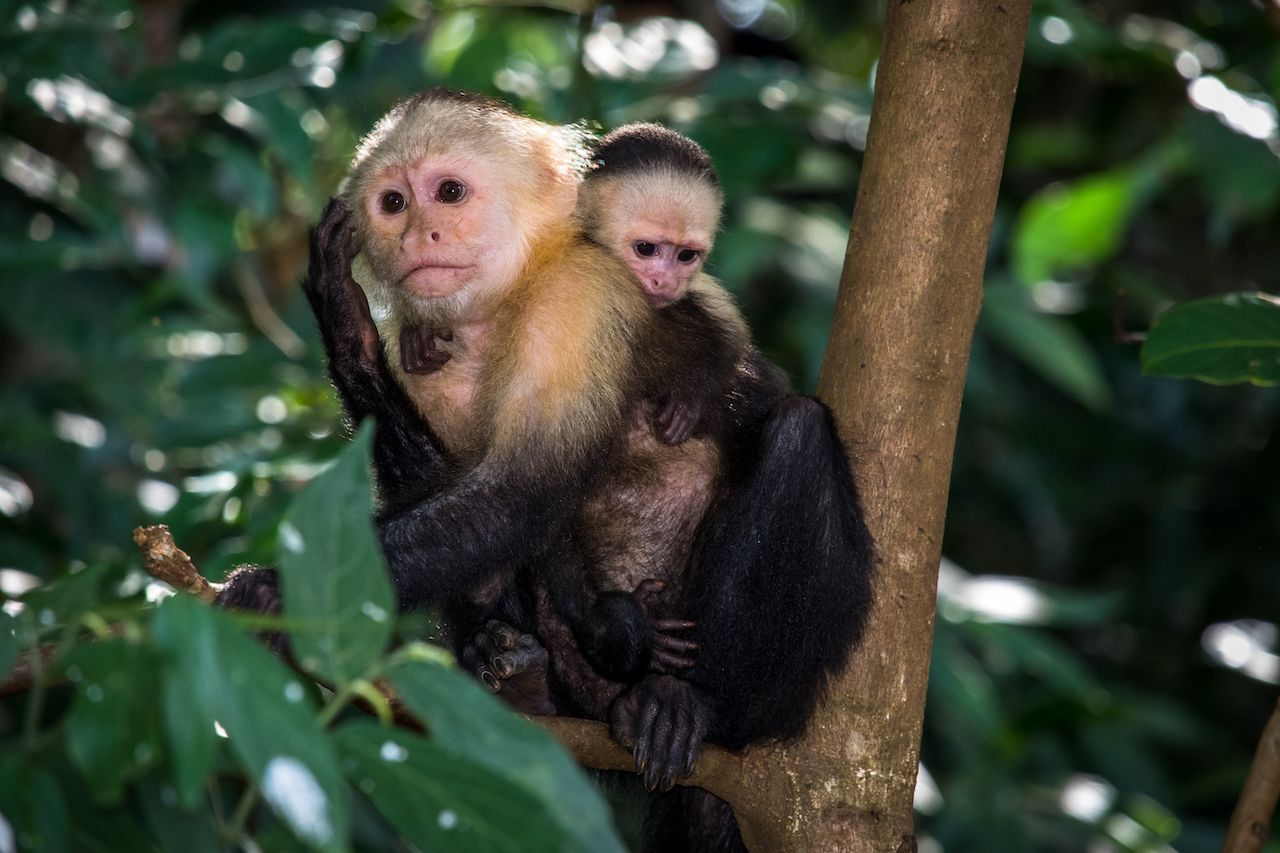 Like the Galapagos Islands, Isla Coiba’s isolation from mainland Central America allowed for species to evolve and uniquely adapt to the island. According to the Smithsonian Research Institute located on the island, “Coiba Island is a real-time experiment in evolution — large species of animals grow smaller, smaller ones larger, and many undergo some sort of change due to the ‘island effect.’”

The incredibly low amount of human contact the nearly 200-square-mile island has had over the last few hundred years has made the island, which is the largest in Central America, a scientific frontier in evolution research. Among the 147 bird species found in Coiba Island National Park are crested eagles and scarlet macaws, two species that have all but disappeared from mainland Panama. Coiba Island is a sanctuary for migratory wildlife and other common species in Central America like crocodiles, monkeys, and sea turtles. The island is also home to many endemic species, such as the Coiba Island agouti, a small rodent, and the mantled howler monkey.

Because of the island’s protected status as a nature reserve, national park, and UNESCO World Heritage site, only 60 guests are permitted on the island overnight. Most tour operators don’t actually visit the island but run trips to the island’s surrounding waters and beaches. Beyond the ruins of the prison, the only buildings on the island are a crude dorm set-up that serves as the Smithsonian Research Institute and the park’s ranger station, which has two cabins that guests can book. 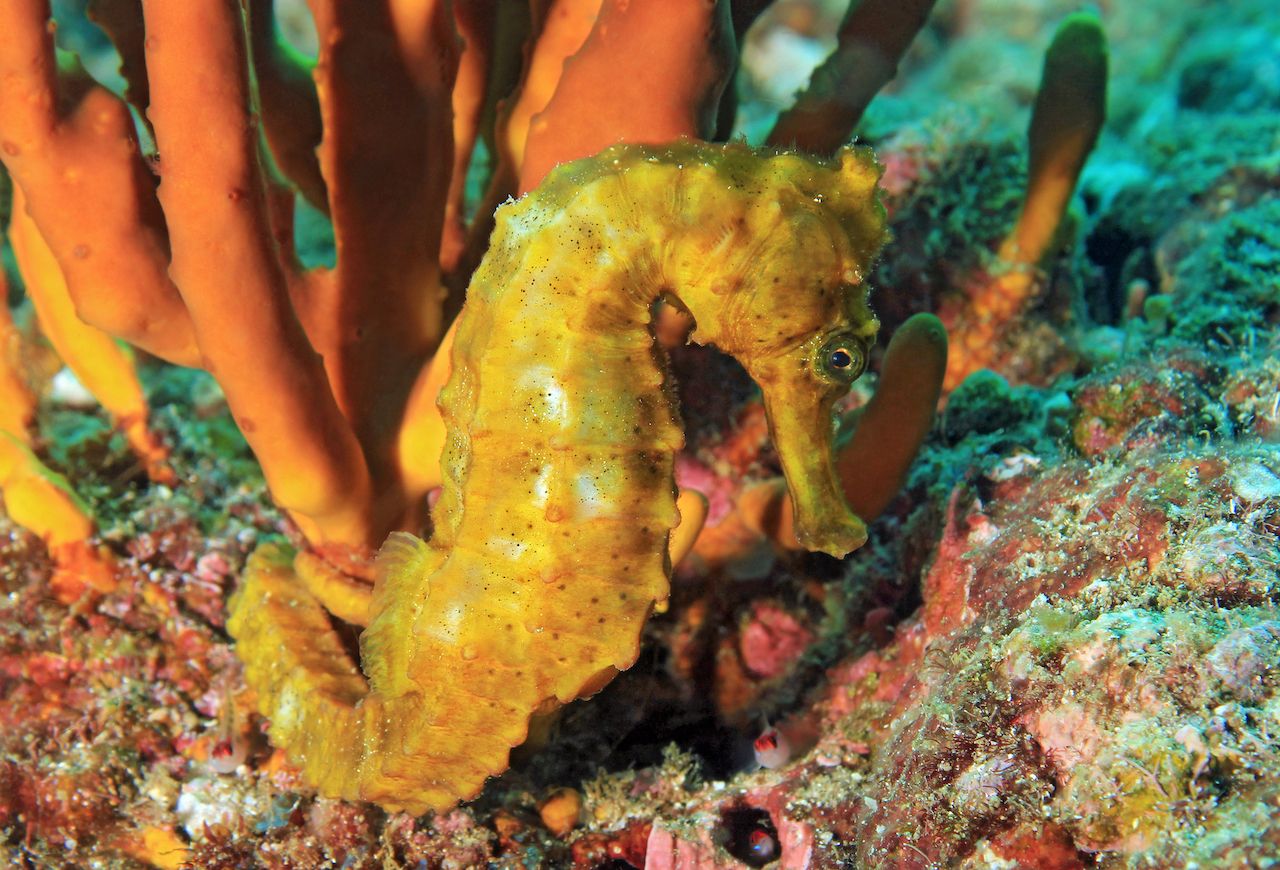 As our Panga boat’s roar turned into a hum, and we drifted closer to the island, the deep blue hues of the Pacific Ocean morphed into shades of turquoise and green that I thought only existed on postcards. Our boat anchored by an enormous rock offshore, and we prepared to dive. After checking all the bells and whistles of my dive equipment, I entered the water for my first dive. My nerves rose as we descended below the ocean’s surface.

Taking my first breaths from my regulator while following the anchor line down, I glanced towards my divemaster, who motioned me to look to the seafloor. We were descending upon several blacktip reef sharks. We circled the reef, encountering a hawksbill sea turtle, needlefish, and two large longtail stingrays, before coming to a patch of sand to go over dive skills.

The skills most people perform in a pool during their dive certifications, I was executing surrounded by marine life. Over the next several days, I thoroughly explored the reef systems off of Coiba Island and was overwhelmed by what I found. Every nook and cranny of the reef was teeming with life. When I was focused on moray eels tucked into small caves or camouflaged rockfish hiding in plain sight, schools of thousands of tuna, barracuda, or jackfish would pass overhead. After one ascent, a whale shark appeared just as we were boarding our boat to leave.

My dive experience in Coiba National Park was not unique, not for the location at least. The waters around Coiba are home to over 750 species of fish, over 30 shark species, and 20 species of whales and dolphins. With each dive, I descended into a world of abundant marine life, the likes of which are becoming increasingly rare. Each beach we visited seemed to belong in the South Pacific or the Caribbean, with snow-white sands colliding with electric blue water in front of a backdrop of verdant jungle. Additionally, the west side of the island is said to be peppered with near perfect surf.

Coiba Island stands as a lofty goal for what all national parks and nature reserves should be: heavily protected, scarcely encroached upon, and a refuge for wildlife.

DivingCozumel is every drift diver’s dream
Tagged
Diving Beaches + Islands Panama
What did you think of this story?
Meh
Good
Awesome

For the perfect day of hiking and Colombian coffee, head to Jardín
The 11 hardest, most dangerous mountains to climb in the world
21 spectacular and unique trees and forests around the world
The ultimate floating tour through Montana, from Yellowstone to Glacier National Park
The most epic hikes in Wyoming over jagged peaks, volcanic spires, and sand dunes

Panama is reopening to international tourism on October 12

Forget the canal. Here are 11 epic ways to experience Panama

Why you should go to Panama

Inside the Darien Gap: An exploration in 19 photos

I lived with a Guna family in Panama. What happened when I left is one of my best stories.

I crashed my drone into a river in Panama

Panama from the air

On Hawaii Island, the real adventure is far from the Kailua-Kona coast

The most amazing pink-sand beaches around the world

Islands of The Outer Banks: Which one is right for you?