Get off a bus in Playa del Carmen, Mexico, and most people will think you’re there to party like it’s rowdy Cancun or bougie, bohemian Tulum. But tell them you’re headed to Cozumel, and they’ll know you’re there for one thing: scuba diving. Nearly 50 years ago, Jacques Cousteau called Cozumel one of the finest dive spots in the world. With its Mesoamerican Barrier Reef teeming with wildlife, Cozumel still is. Here’s what you’ll experience.

A divers’ island free from the mainland crowds 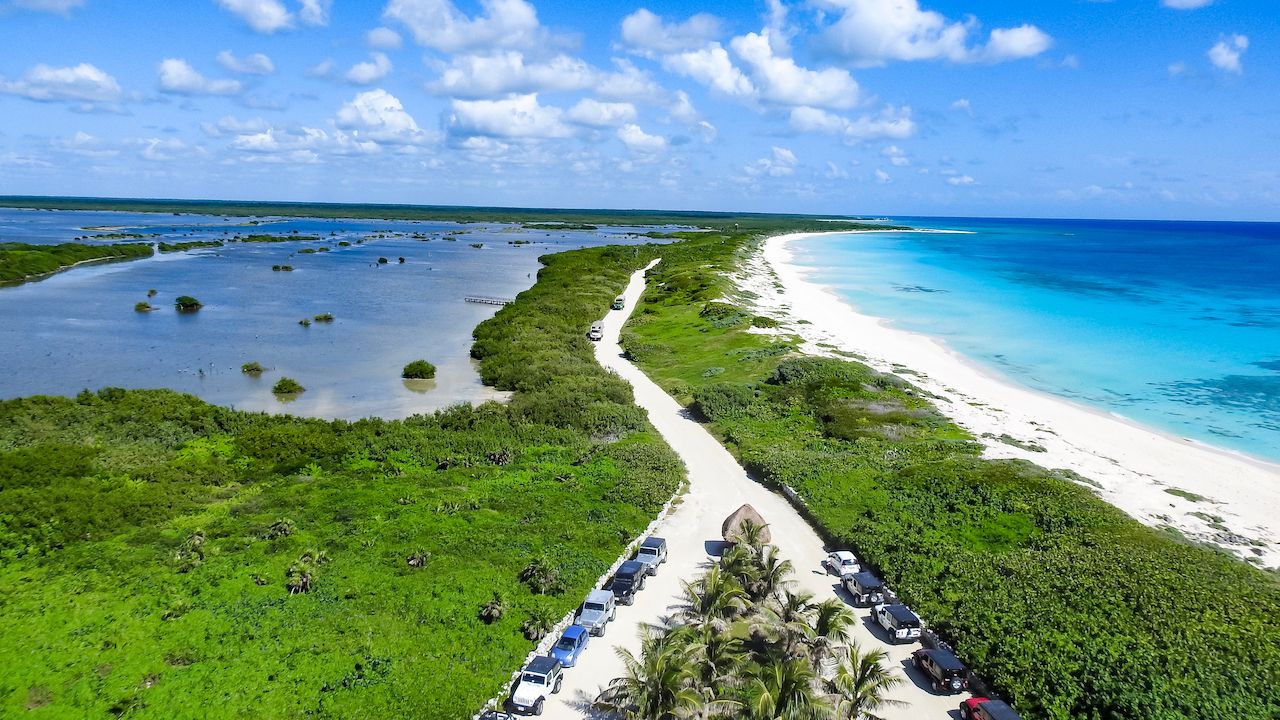 Mexico’s Caribbean Coast might be the country’s worst-kept secret, with all-inclusives carving up the beachfront outside Mayan ruins and hard-partying tourists driving up the average bedtime until well into the next morning. Under an hour on the Ultramar ferry from Playa del Carmen, which sits midway between Cancun and Tulum, Cozumel feels lightyears away from the mainland crowds.

It’s hardly undiscovered, with several all-inclusives of its own, waterfront condos where North American snowbirds migrate for balmier winters, and a steady stream of cruise ships that dock for the afternoon. But above all else, the island’s tourism is driven by one demographic: divers.

Where mainland visitors tend to find, or make, trouble, the divers that venture off the coast tend to be early-to-bed, early-to-rise types looking to maximize their time in the water. Resort guests swap drinking by the pool for drinking in the marine life, and even some cruisers, those that actually stray from downtown San Miguel, trade their cruise ships for dive boats while berthed.

In town, chain restaurants like Señor Frog’s are rarely at capacity, and it’s unusual to see many travelers outside the center, save, perhaps, at the island’s Mayan ruins.

Despite being as poorly kept a secret in the dive community as Playa del Carmen is to travelers at large, Cozumel feels remarkably unburdened by its tourism, offering a tamer, safer slice of Quintana Roo that lets the exquisite reef shoulder most of the marketing, just the way divers like it.

A coral reef that stopped Jacques Cousteau in his tracks 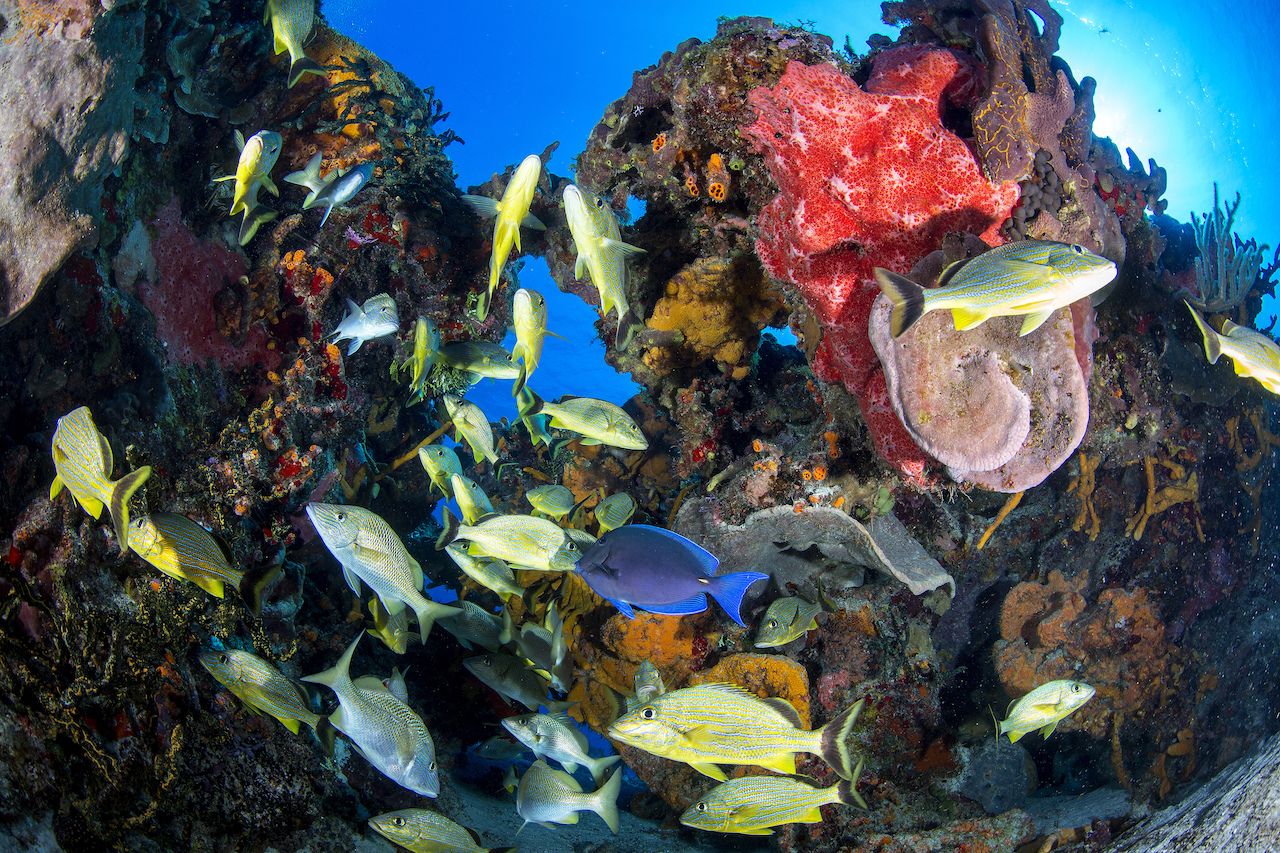 Cozumel sits on one end of the Mesoamerican Barrier Reef, a titanic reef system that spans the coasts of Mexico, Belize, Guatemala, and Honduras. Its Caribbean waters are impossibly blue, dark like denim where they plunge deep and a turquoise so vivid it almost looks artificial where they flow over fine white sandbars.

Below the surface, the water’s warm, requiring only a shorty if any wetsuit at all, and clear as gin, showcasing the reef system’s many-hued inhabitants with perfect visibility. Loggerhead, green, and hawksbill turtles mingle with eagle rays on the ocean floor while nurse sharks and barracudas stalk the reef. Triggerfish the size of overfed house cats and jet black swimmers with electric-blue trim glide past large, crevice-dwelling lobsters, which bury themselves among roughly 20 different coral species and 30 types of sponge.

It’s no wonder Cousteau declared Cozumel a world-class diving destination upon visiting in 1961, high praise from the man who co-pioneered the first commercial scuba gear. In large part, the island owes its reputation to the underwater explorer, whose own legacy is kept alive by the myriad divers who visit each year. 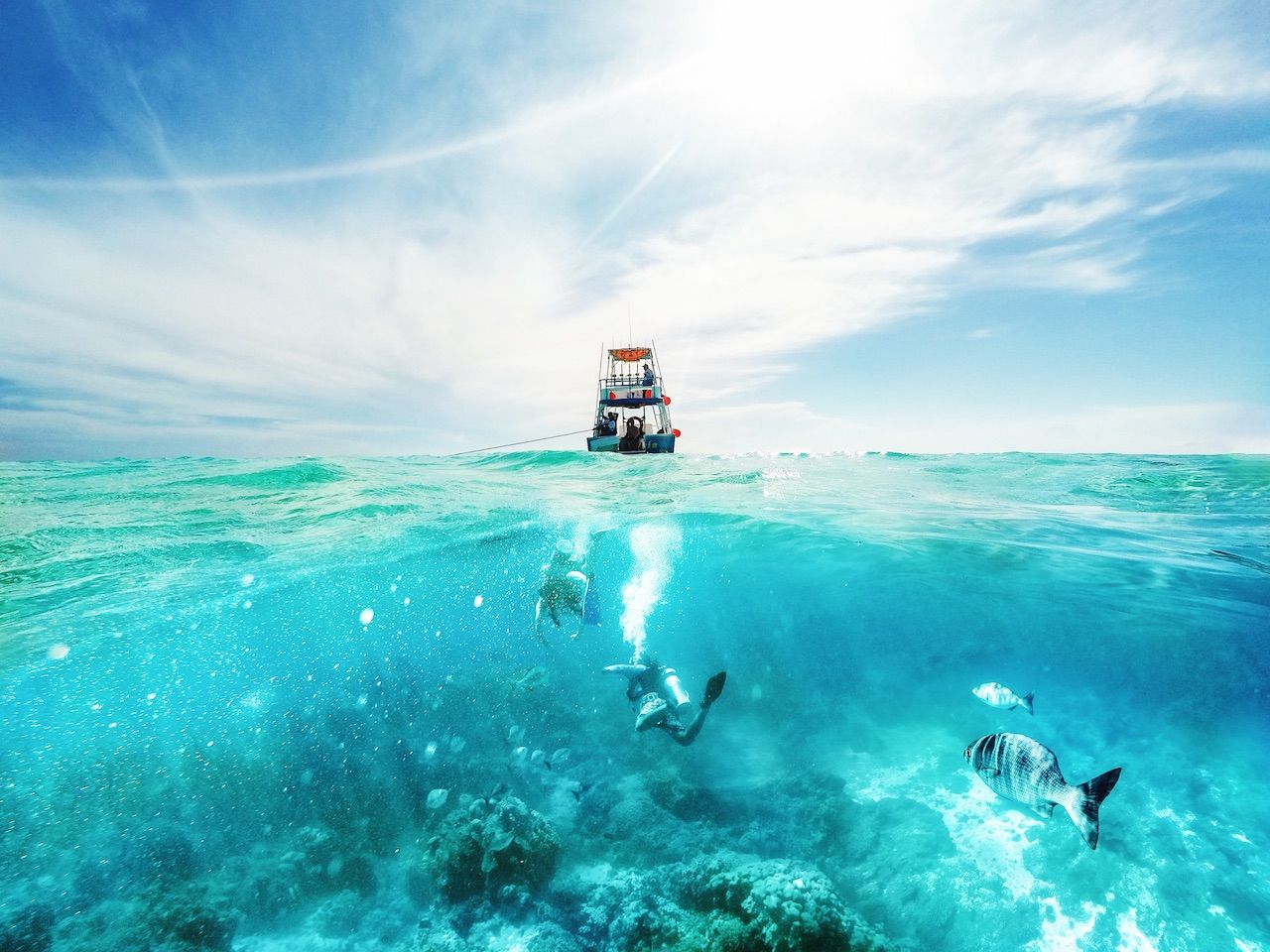 Cozumel seduces both resort-course divers and those with decades of experience. In a week of diving with ScubaTony, I set out with divers of all skill levels, among them a newly certified diver who’d never taken to the open ocean, an Austrian couple that had spent the year racking up dives around the world after getting certified in Thailand, a former police rescue diver, and newlyweds Frederick and Debra who had more than 20 years of experience apiece.

Some, like myself, were new to Cozumel. Others were island regulars. All were consistently impressed by the reef, which flaunts much of its most coveted marine life at depths accessible to beginners. A number of the most popular sites, including Colombia Shallows with its platform reef and Punta Dalila with its resident king crabs, linger between a mere 30 and 40 feet.

Intermediate divers can drop down to 60 feet at the Santa Rosa Wall, where they can peer out over an inky abyss that plummets 3,000 feet down before returning to the site’s coral formations, some of which create tunnels for divers to swim through. Even the more advanced C-53 wreck, a 184-foot Mexican Navy Minesweeper in the Chankanaab Reef that’s had its doors removed for easy access, only hits about 70 feet.

“There are deeper dives,” says Marc, one of ScubaTony’s expert guides, as we head back from the wreck. “But the best max out at 80 feet,” he explains, noting that there isn’t much worth doing that advanced open water divers can’t handle.

Drift diving that’s the envy of the world 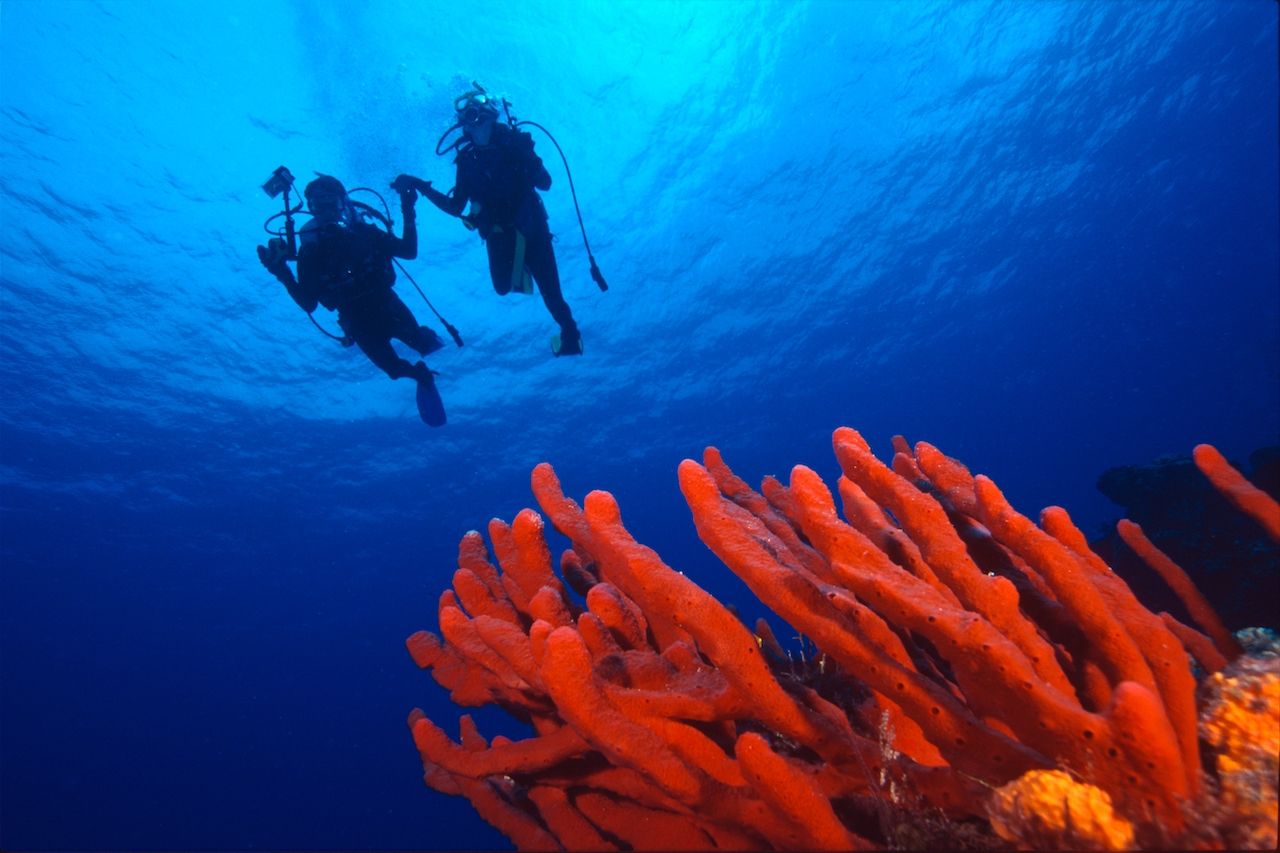 It’s less the depth that decides a site’s difficulty in Cozumel than the current. And for many of the island’s return divers, it’s precisely the drift that draws them back year after year.

“I was in Roatan, Honduras, with my son recently,” Debra tells our boat of more experienced divers one afternoon as we swap stories en route to Punta Tunich, an advanced site in the Palancar Reef that Marc wagered has one of the fastest currents in the world. Like Cozumel, Roatan belongs to the Mesoamerican Barrier Reef, but according to Debra, the drift could hardly compete.

“I’d recommend it,” she says with authority, swishing de-fogging solution around bright pink goggles and checking her matching, pink-trimmed BCD, “but we wouldn’t have come anywhere but here for our honeymoon.”

Punta Tunich is the holy grail for drift divers in Cozumel, with an adrenaline-inducing current unlike any I’ve experienced. Unlike most drifts, which make divers feel more like astronauts floating weightlessly in space, when I found my perfect buoyancy at Punta Tunich, it almost felt as though I was still while the ocean spun around me, like a movie projected on an infinite screen.

Swimming against the current to take in wildlife like splendid toadfish, nurse sharks, or even seahorses is a workout, albeit a worthwhile one. But it’s best to just go with the flow, literally, as you hurdle past the steep wall, reef top, and neighboring Yucab reef as you slowly begin your ascent.

It’s not all fast and furious here, though. Cozumel’s gentler currents make diving easier and, for some, more enjoyable, almost completely eliminating the need for flippers. Novice divers will find mild to moderate drift at sites like the Santa Rosa and Colombia Walls, as well as Casa Blanca, an unofficial site neighboring La Francesca, a dive site worth seeing in its own right that’s rumored to be named for a French woman Cousteau took as a lover. 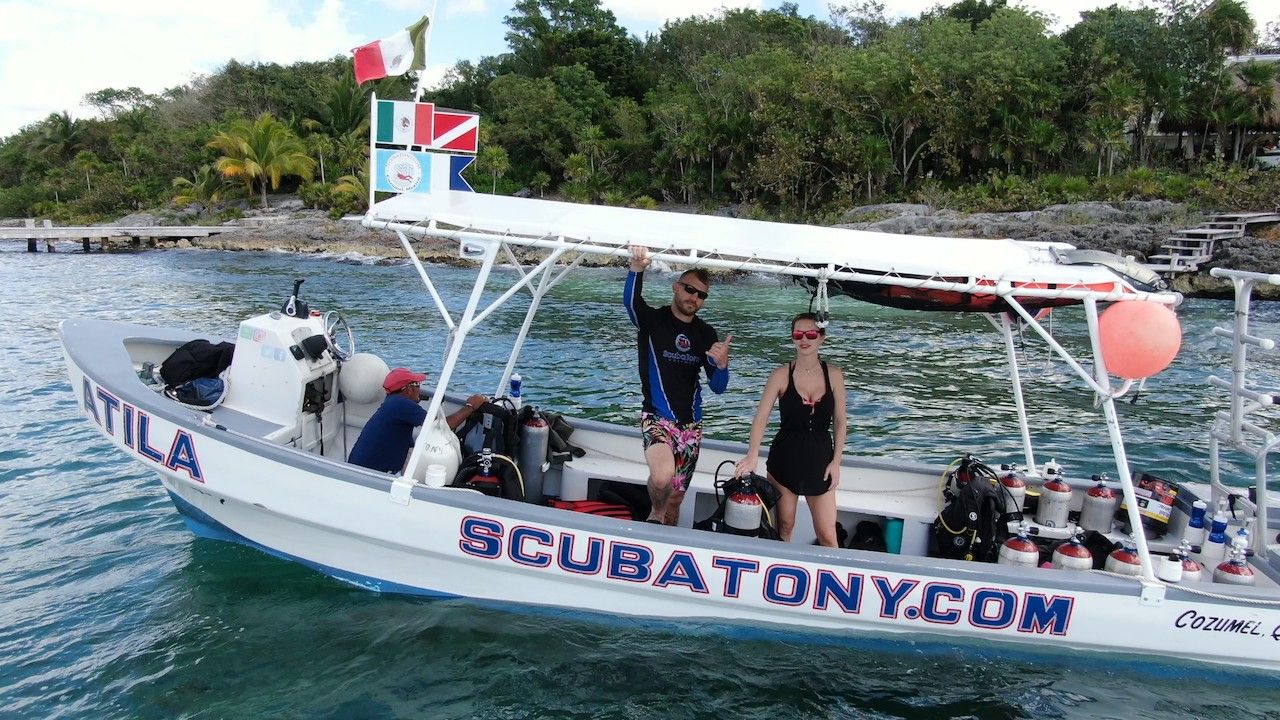 In one diver’s case, it isn’t just the drift that keeps annual visitor Dudley coming back for more but the ScubaTony team. “Dive with them once,” he assured me on my first morning out, patting our captain, Papo, on the back like a brother, “and you’re family.”

It was easy to believe. A few hours prior, I had arrived at Marina Fonatur early, eager for my first dive after a few years’ hiatus. There, a guide named Pedro greeted me with a warm, welcoming smile, quickly outfitting me with gear and briefing me on the sites we might visit that morning.

Next I met Papo, who was holding a plate of stewed pork and beans that his wife had made, sharing breakfast with the marina crew as they often did before early-morning departures. Within minutes, I had a tortilla in one hand and my other arm around the captain, who kept inching the plate my way, encouraging, “Don’t be shy.”

It’s hard to be shy on most dive boats, but ScubaTony’s intimate, six-person-max setups ensured all divers were looked after as if they were, as Dudley said, family.

Only, in a way, even better.

Resort guests get shuttled to and from their hotel docks, their rental gear already assembled and awaiting. Sites are decided democratically, based on each diver’s experience, the day’s conditions, and any requests divers may have. Then, in the water, beginners are paid special attention without feeling nannied while advanced divers are given more free reign, promising everyone the dive of their dreams. 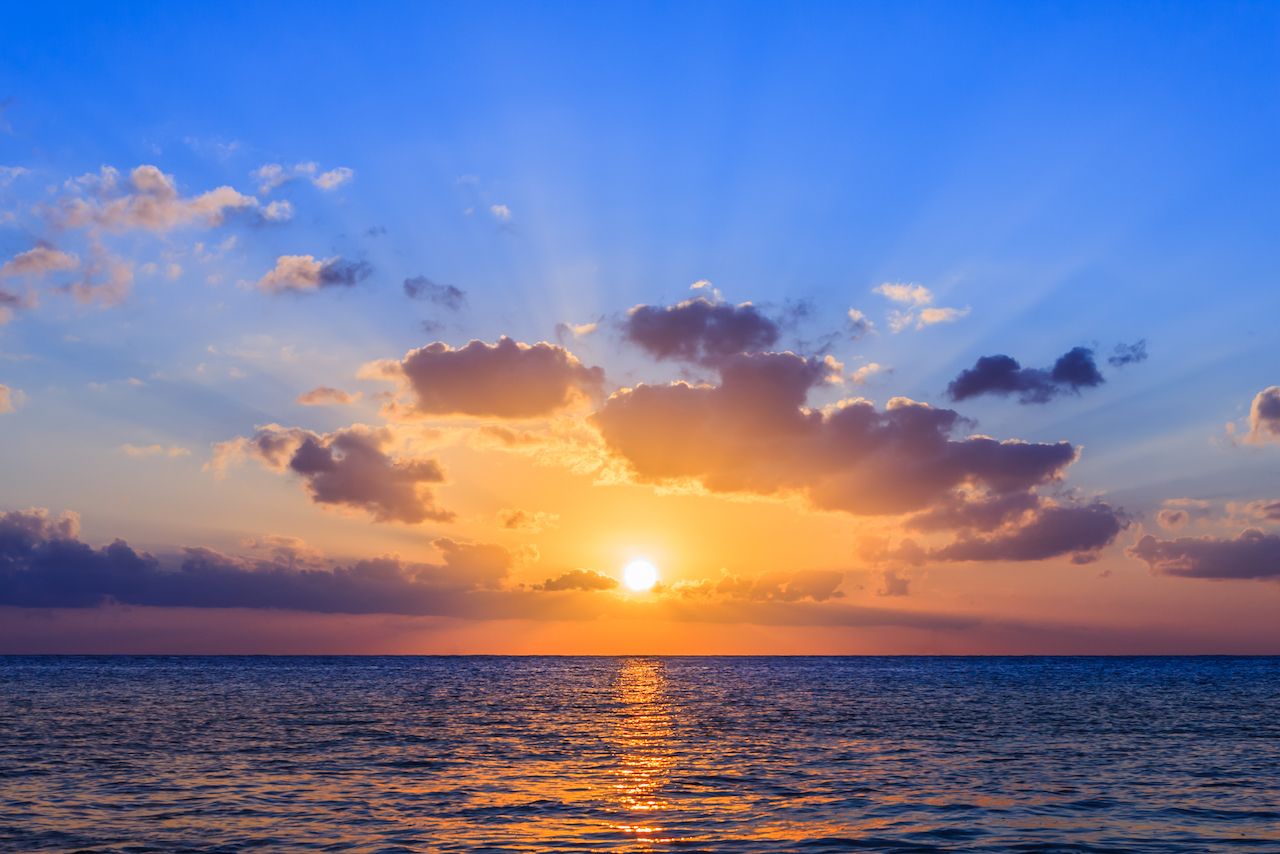 A full day of diving might use four tanks, split between morning and afternoon excursions. Each outing visits two sites, roughly one tank and one hour each, with an hour-long surface interval in between where divers can refuel and rehydrate with the snacks and water bottles provided.

More than once after a four-tank day, I wound down in the hot tub at my accommodation, Casa Phoenix, staring out at the sea as the sun sank below the horizon. Each time, I imagined there was little better than letting your muscles soak under pastel skies after a long day in the water. I was wrong.

Between late March and the end of September, ScubaTony also hosts combination twilight and night dives that allow divers to take in the sunset from the very water the sun seems to disappear beneath before heading back underwater after dark, when the seascape takes on new characteristics illuminated only by flashlight.

At night, new marine life like octopuses and moray eels also come out to play, painting a fuller picture of the reef system’s many wonders.

If possible, request a twilight or night dive at La Francesca to experience all the romance and exhilaration of a foreign affair, whether or not Cousteau’s French beauty was anything more than legend. 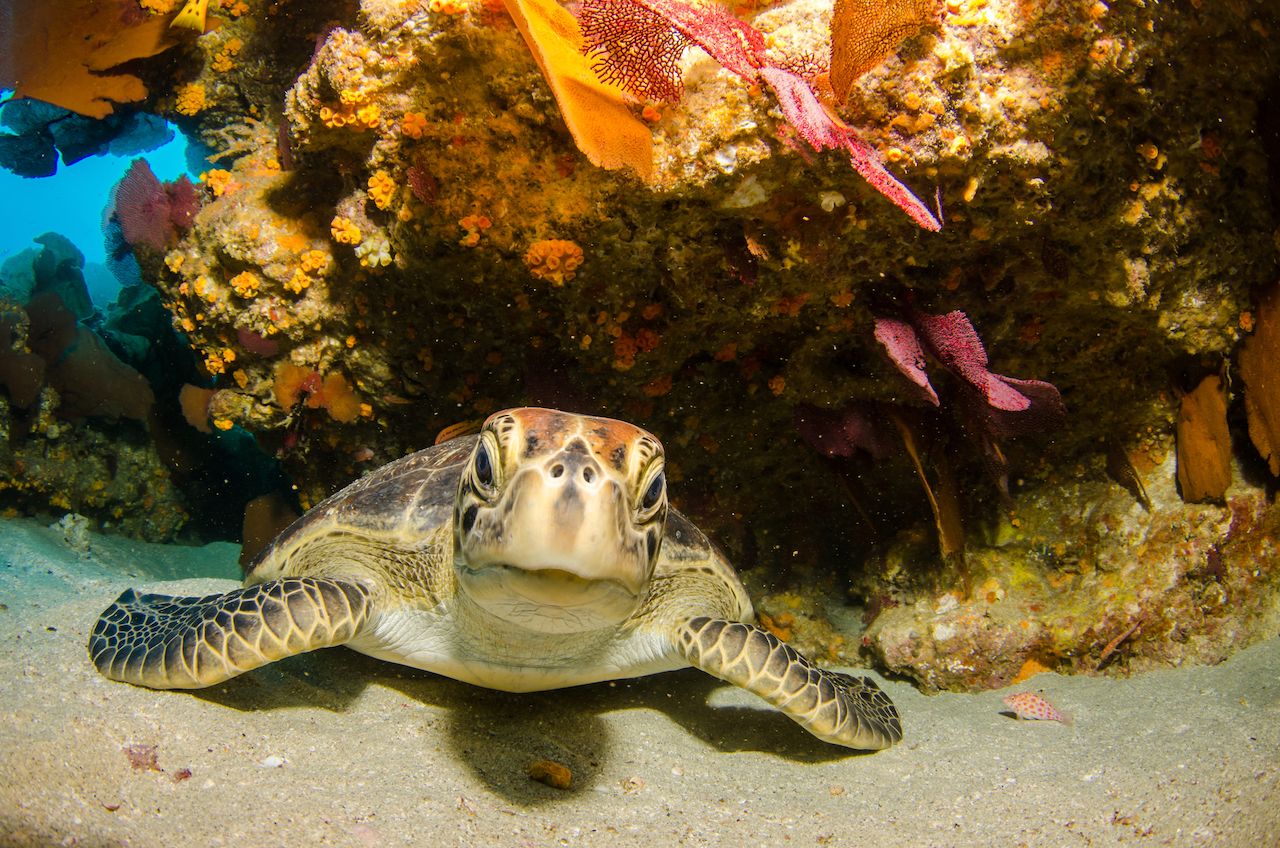 The majority of Cozumel’s most frequented sites belong to Arrecifes de Cozumel National Park, a protected area spanning the island’s south side. It’s here that vulnerable species like splendid toadfish, queen conch, and black coral are most present or, in the case of the island’s turtle species, thriving.

Though specific wildlife is never guaranteed on underwater safaris, Cozumel consistently lived up to its reputation as a sea turtle haven while I was there. I saw two almost immediately on my first dive at Colombia Pinnacles and at least one on nearly every subsequent dive. Perhaps it helped that I came in June, which coincides with the rainy season but also hatching season, a phenomenon visitors can observe up close on the island’s eastern beaches.

Still, like most of the world’s reefs, Cozumel’s are under threat of bleaching, human impact, and, at times, invasive algae. Divers should always do their part to protect the environment by keeping their hands to themselves, wearing reef-safe sunscreen or none at all when the coral is agitated, and donating to projects like the Cozumel Reef Restoration Program, just a click away when you book with ScubaTony.

DivingScuba Diving in Baja California Is One of Mexico’s Best-Kept Secrets
Tagged
Diving Mexico
What did you think of this story?
Meh
Good
Awesome