It might be an unfortunate reality, but animals have to adapt to us more than we do to them. We’ve got the tools, we build the roads, we drive the bulldozers. As we continue our relentless encroachment on animal habitats, we force our feral neighbors into unsafe living conditions, often bordering busy highways and other roads. As highways often bisect delicate ecosystems, the animals living there find themselves separated and isolated, endangering the ones that try to cross over. 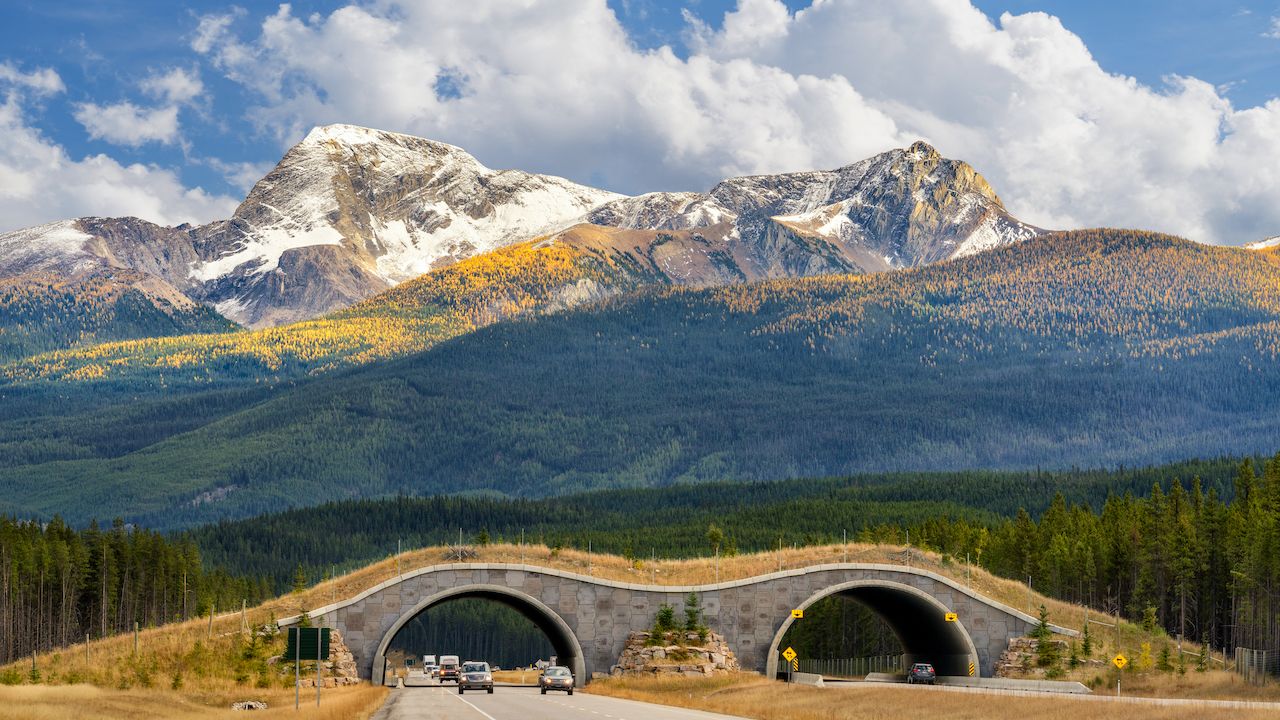 Banff has been leading the charge in giving animals safe highway passage for over 20 year. The national park, famed for its abundance of wildlife, has built several crossings for the benefit of its native wildlife. There are over six overpasses and 38 underpasses throughout the Trans-Canada Highway, reducing wildlife collisions by 80 percent and making Banff a major success story in the world of animal crossings. Defined by their semi-circular design, and paths lined with flora and greenery, these trailblazing crossings blend seamlessly into the natural environment. And set against the backdrop of Banff’s dramatic peaks, the crossings are arguably an attraction in themselves.

Christmas Island, far off the northwest coast of Australia, isn’t known for its reindeer and elves, but for its abundant red crab population. Each year 50 million crabs dash toward the sea to spawn, though that annual migration has been disrupted by human infrastructure projects. To apologize for inconveniencing the crabs, and help them reach the sea, the island built a 16-foot-high bridge the crabs can use to cross the road. There have also been 65 miles of plastic barriers and thirty-one crab underpasses installed throughout the island to further assist the crabs on their journey. 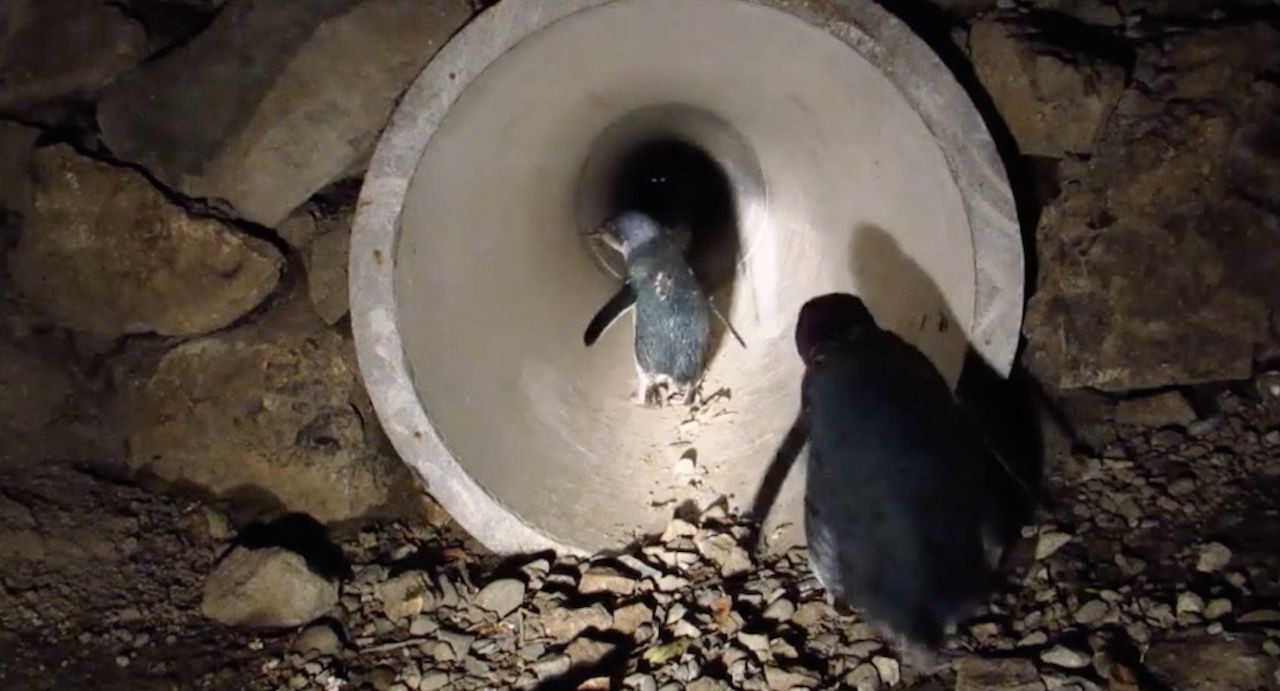 Not all wildlife crossings exist aboveground. One of the coolest actually takes the form of a tunnel, and probably not for an animal you’d expect. The town of Omaru on New Zealand’s South Island built an underpass for its korora penguins (little penguins). The korora penguin population is in decline, so the community is doing what it can to make their lives a bit easier. Since the penguins fish at sea but nest on land, the underpass makes it easier for them to travel back and forth underneath the road without endangering themselves in traffic. The underpass has been hugely popular in the penguin community, with an estimated 20 penguins making use of it each night. 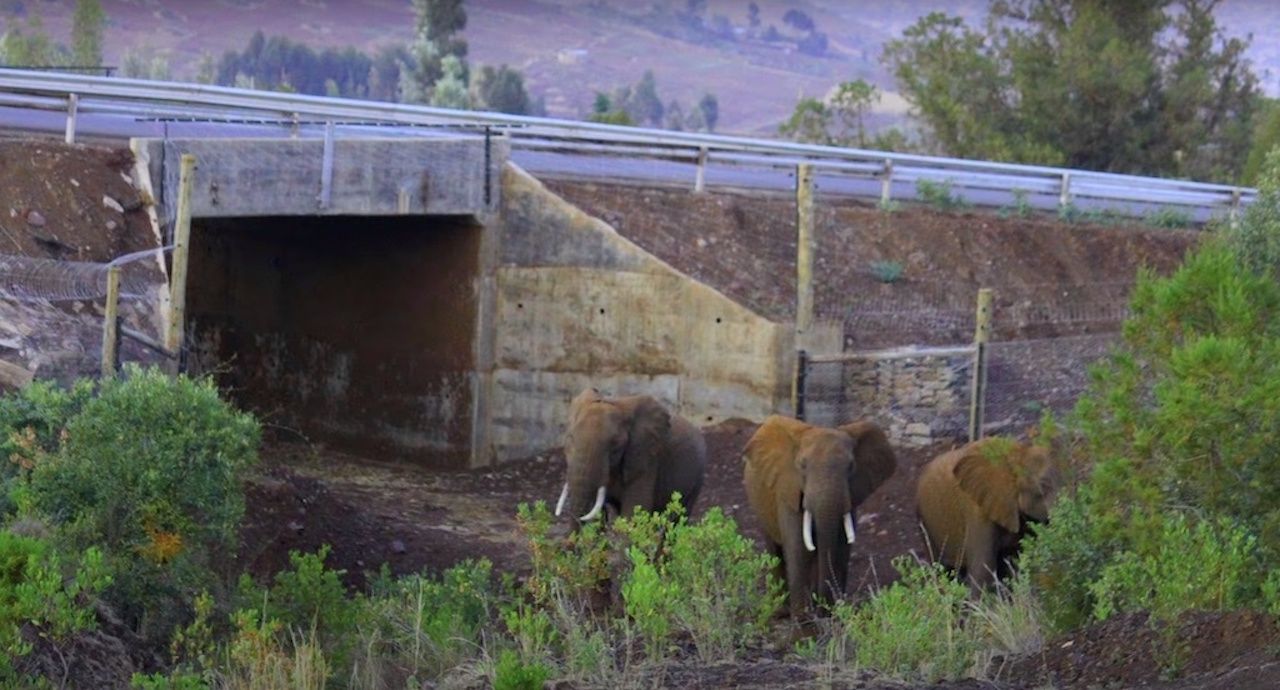 Some of Africa’s wildlife are probably too tall for an underpass (we’re looking at you, giraffes), but elephants can greatly benefit from a well-placed crossing and aren’t quite tall enough to hit their heads. Africa’s first elephant underpass opened in 2011 near Mount Kenya, uniting two elephant populations that had been separated by human development. The underpass crosses under a regional highway, allowing elephants to travel safely from one side to the other. The importance of this simple piece of infrastructure can’t be overstated, as it allows elephants to reestablish connectivity with their brethren and reduce habitat pressure within the Lewa area. You can watch the whole process in this video from the Lewa Wildlife Conservancy. 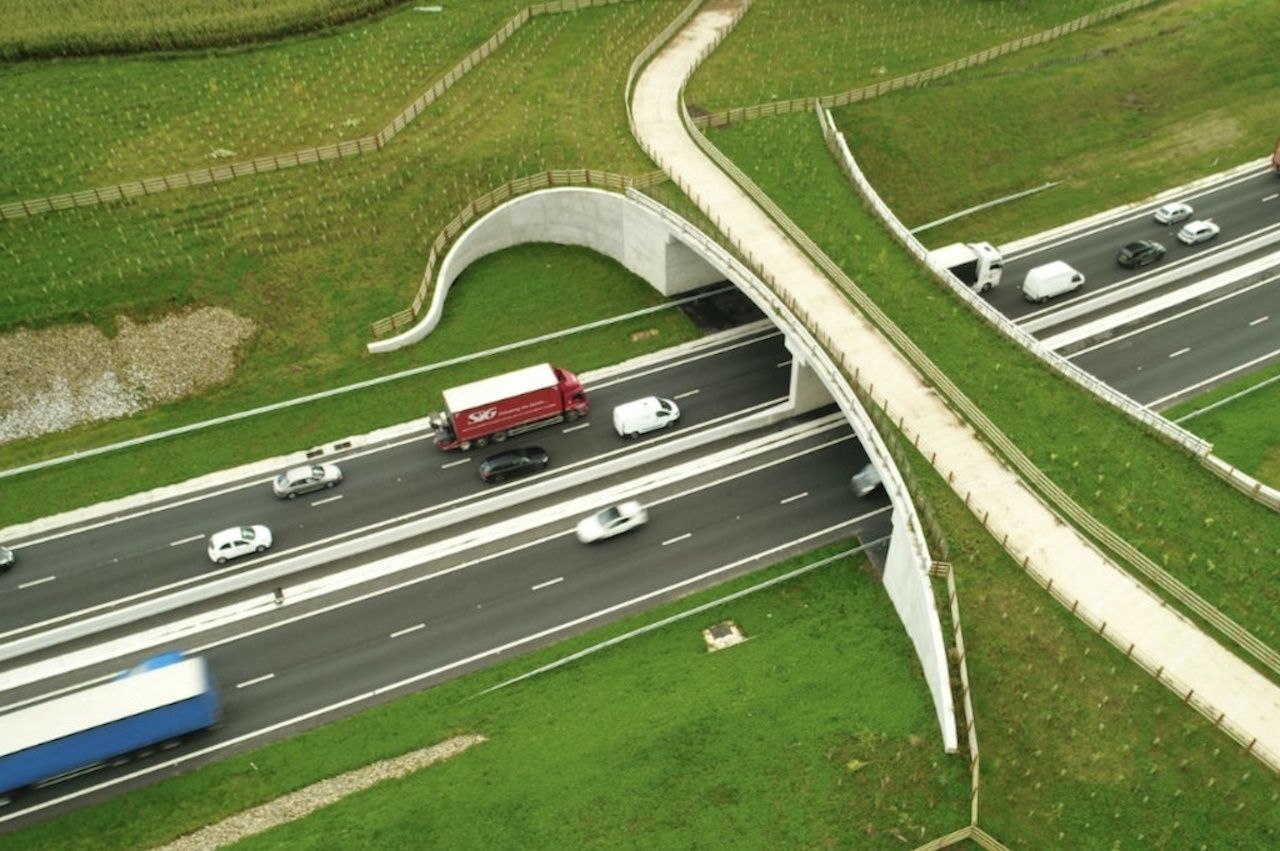 Wildlife overpasses in the UK are called “green bridges,” and this one certainly lives up to its name. One of the most notable is the bridge that opened in 2018 above the Knutsford-Bowdon bypass on the A556 in Cheshire. The bridge is covered in greenery, which is intended to attract small animals like voles and badgers, drawing them away from the dangerous road. This crossing is also open to people, so if you feel like a relaxing jaunt across a multi-lane highway, you can help yourself. 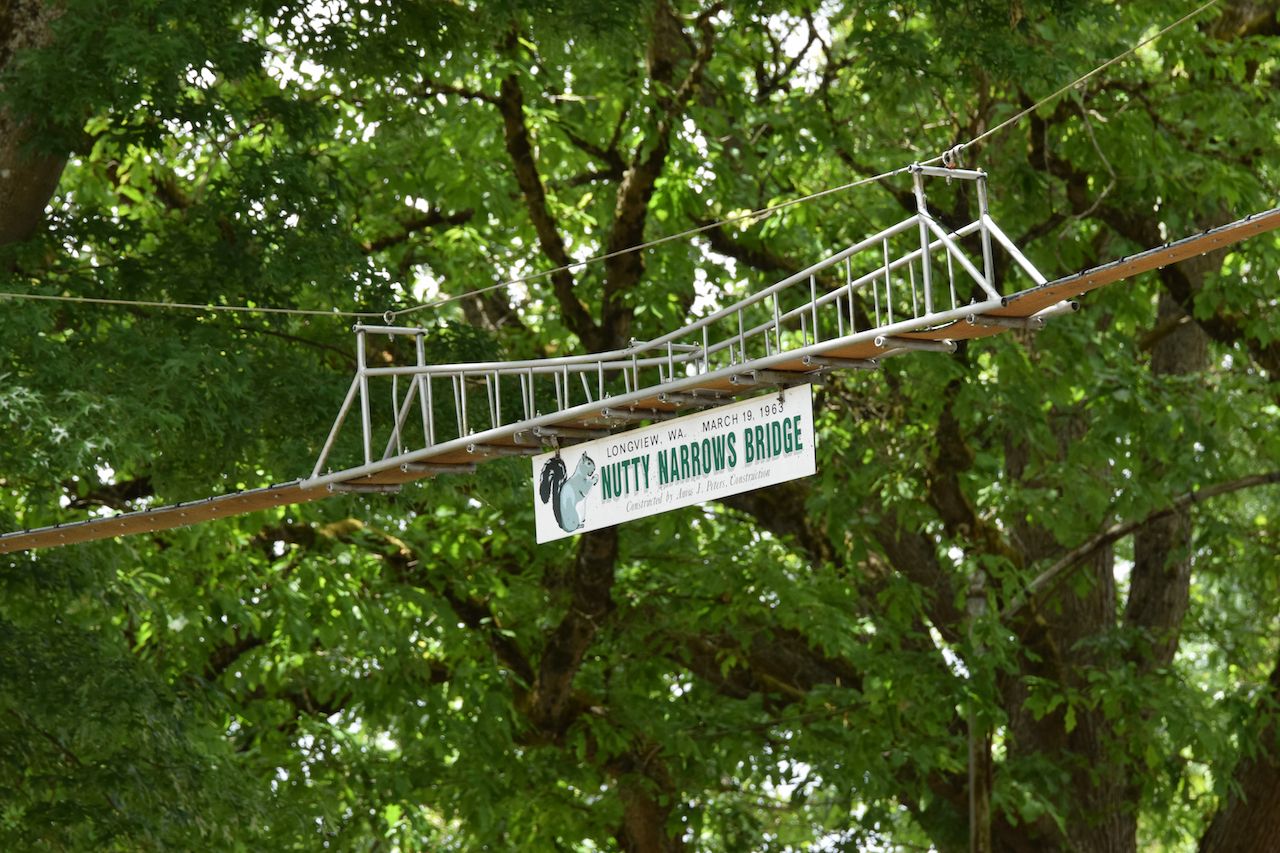 The Nutty Narrows bridge in Longview, Washington truly lives up to its name. It’s narrow, and has probably helped transport thousands of nuts during its nearly 60-year lifespan. Stretching high above a busy thoroughfare, the bridge was built to help squirrels safely cross from tree to tree without endangering themselves on the road. It’s construction set an important precedent in Longview, with several similar squirrel bridges being built around the community in the years since. 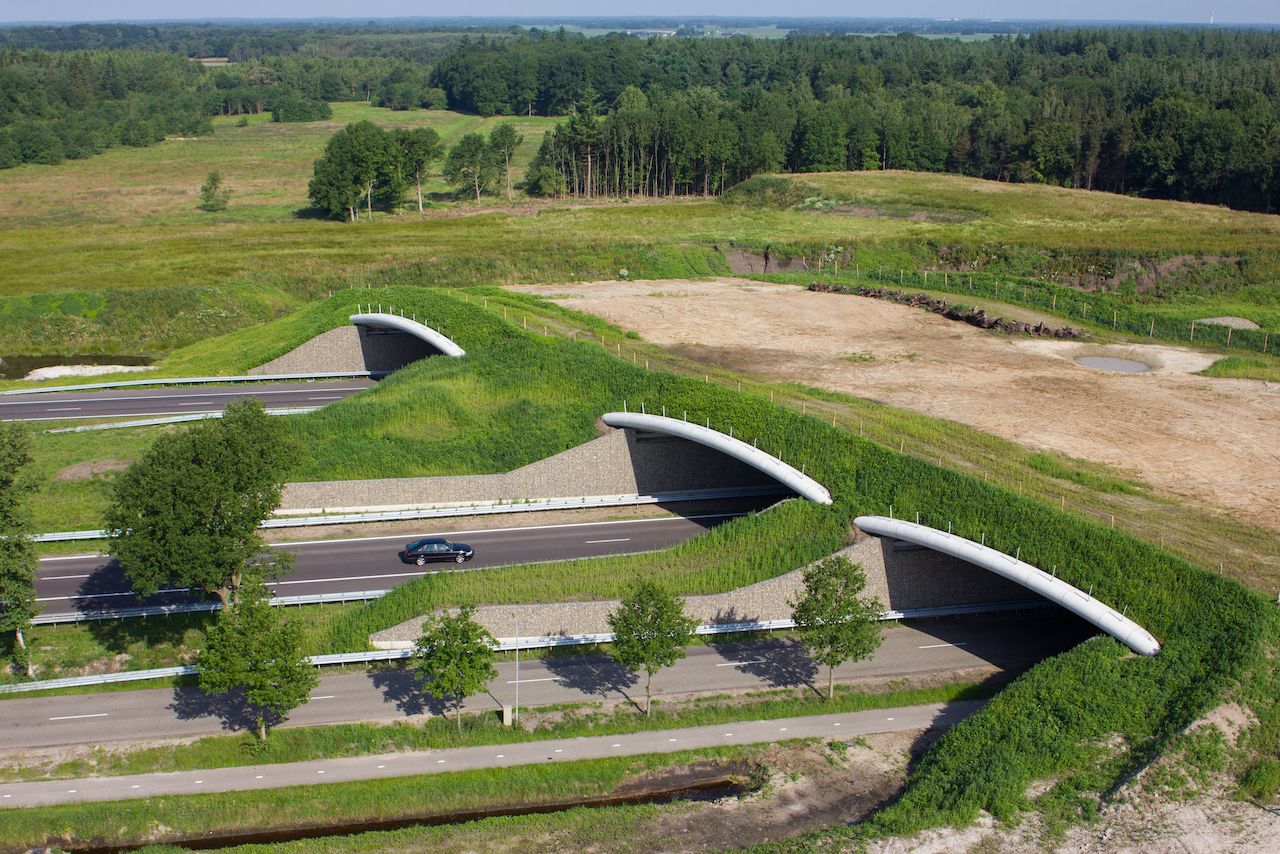 Wildlife in the Netherlands has the privilege of being able to stroll across the longest wildlife crossing in the world. Natuurbrug Zanderij Crailoo, which translates to “sand quarry natural bridge,” is 2,625 feet long and 164 feet wide, crossing roads, railways, and even a sports complex. It often plays host to deer, wild boar, and European badgers.

Wildlife5 Places With the Most Dangerous Animals in the World (That Aren’t Australia)
Tagged
Sustainability Wildlife
What did you think of this story?
Meh
Good
Awesome