Cruise food is very polarizing. Stereotypes in pop culture represent the food at sea as spoiled, expired, canned, boxed, and generally unappetizing – but that’s not the reality of how food is prepared and served on-board cruise ships. In reality, there’s absolutely nothing to fear – and a lot to look forward to – when you sit down for dinner at a cruise ship restaurant, or even peruse the buffet. And those stereotypes definitely do not encompass how cruise ship chefs feel about their food.

“We exceed the quality of on shore options,” says Chef Rudi Sodamin, the newly appointed Head of Culinary Arts at Princess Cruises. “Not many restaurants or hotels have seafood or fresh lobster on a weekly basis.”

Steve Van Der Merwe, corporate executive chef at MSC Cruises, also stands by the freshness of his fare: “Our steaks are hand cut on board. Fish and poultry are butchered on board and all those cookies, cakes, and bread? They’re baked on board.”

Here, cruise ship chefs reveal what they wish everyone knew about how food is prepared and served at sea.

1. The common perception of cruise ship food is all wrong 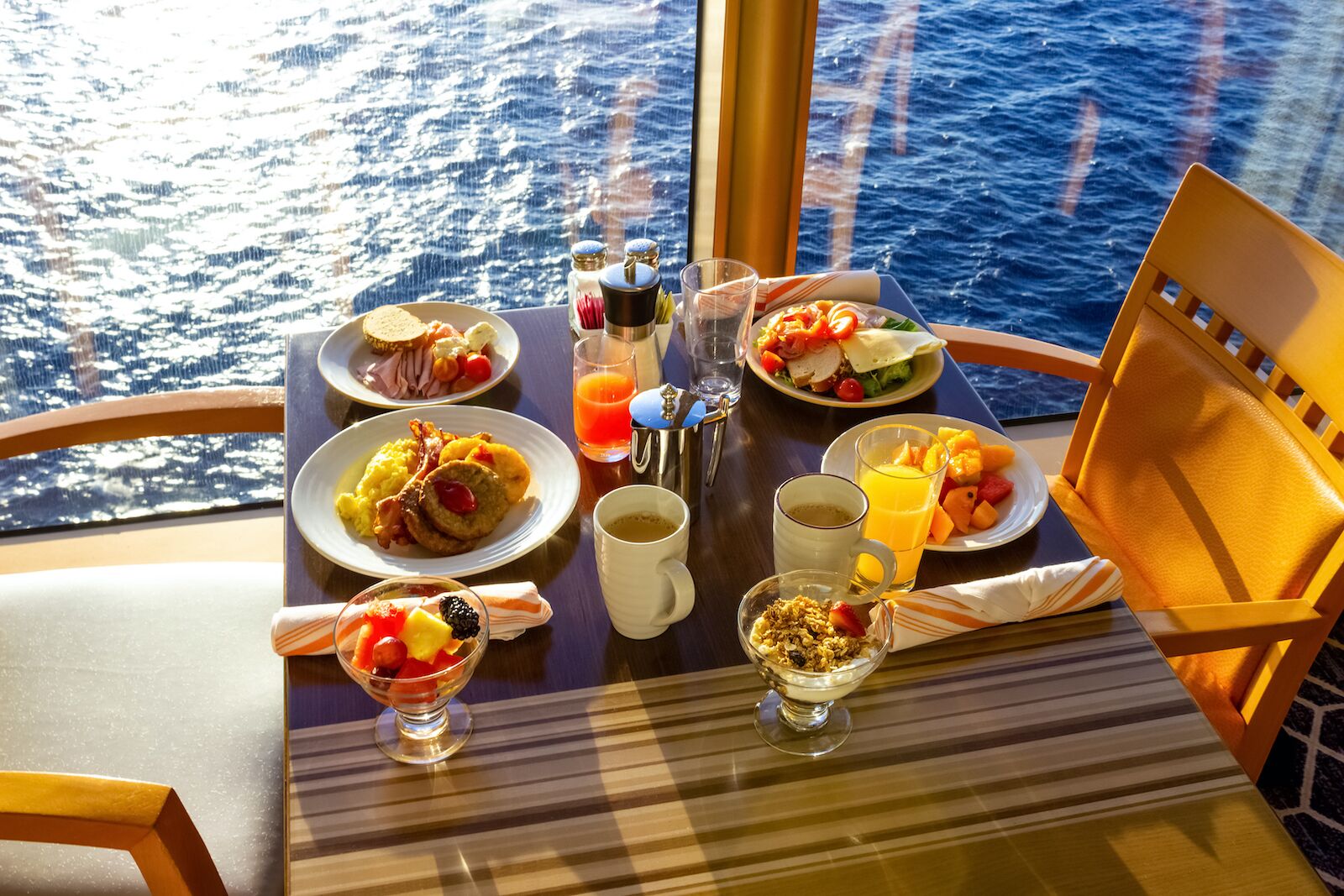 According to chefs, the problem isn’t their food. It’s our perception of it.

“We don’t just serve meat and potatoes,” insists Sodamin. On his seven-day cruises diners can choose from more than 450 options. Still, his greatest challenge is changing the way people view cruise ship cuisine. In fact, he’s so committed to shattering the stereotype he wrote one of the first cruise line cookbooks. Not only is there a greater variety of food these days, but it’s fresher than ever.

“What shocks people the most is finding out our bakers are baking bread 24/7, nonstop, to provide freshly baked bread at any time of the day,” says Sharmaine Amparo, an assistant cook at Marella Cruises.

Sodamin has to plan ahead when creating his menu, knowing it will be seven days before he can restock ingredients. “There is no emergency food truck in the middle of the ocean,” he quips.

That doesn’t stop some guests from making outrageous requests though. “We were on a world cruise once and a VIP guest made a request two days before we arrived in Tonga for us to cook him an entire Tonga pig,” recalls Steve Van Der Merwe.

The inability to restock means that cruise ship chefs also have to make certain ingredients stretch long periods of time – perhaps longer than they would on dry land. One food that proves challenging to use before they go bad is bananas.

“We can order them in different stages now, but it’s difficult to get them to last long on, let’s say, a nine-day cruise,” says Van Der Merwe.

3. All food waste is properly disposed of

Sodamin recalls guests once arguing that he should stop serving spare ribs and lamb shanks because of the leftover bones.

“I would say that’s stupid. That’s inexperience. We definitely want to give our guests an amazing experience, and that includes not taking items off of the menu because of the waste.”

Princess Cruises still serves menu items. The bones go into the ship’s compactor, not overboard, and they’re properly disposed of on shore. 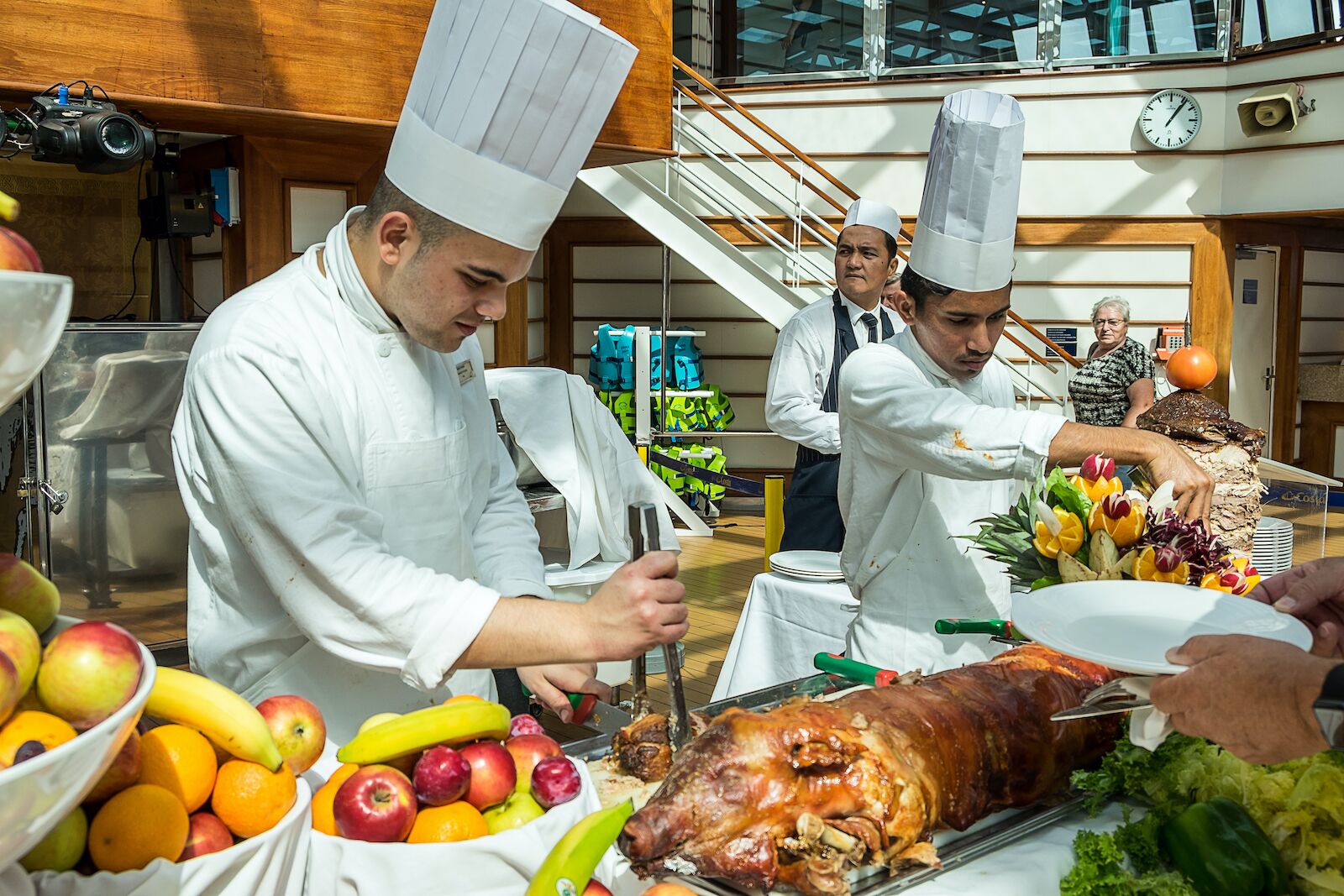 A cruise ship restaurant has yet to be awarded a Michelin-star but these oceans liners are no stranger to chefs with serious accolades. In fact, many highly decorated chefs collaborate with cruise lines to create specialty restaurants at sea. Celebrity Cruises has worked with Daniel Boulud and Cornelius Gallagher, and Princess Cruises has partnered with Richard Chen and Emmanuel Renaut. Seabourn cruises has its gourmet menu that features dishes crafted by Thomas Keller (who has earned an impressive seven Michelin stars across his restaurants).

Unlike what viewers see on Bravo’s hit show “Below Deck,” you can’t make or break a cruise ship chef’s day with your dietary request.

That said, they’ve seen some requests that have raised an eyebrow: Amparo remembers when a guest insisted they were allergic to lettuce, tomato, carrots and cucumber, after ordering a salad. She’s also had a guest order a chicken salad, hold the chicken.

“Duck is one example of an ingredient that we just can’t get at this time,” says Van Der Merwe.

He can’t even order it from China — the largest duck producer in the world — because FDA regulations state it has to be sourced in the US. As a result, his team has had to change two dishes on the seven-day menu. Fortunately, one thing there’s never a shortage of is frozen water. Princess Cruises uses three tons of ice to carve 20 sculptures per cruise.

Not only do the ships have to undergo thorough inspections twice a year, they also have to adhere to stricter sanitary conditions than restaurants on land.

“I think buffets have come a long way,” says Van Der Merwe, who personally loves a good salad bar. His team implements best practices like preparing food in small batches so the odds of you getting a hot dog that’s been out for hours are nil. “Because the volume of people we serve is so high, there’s a constant turnover of food.” 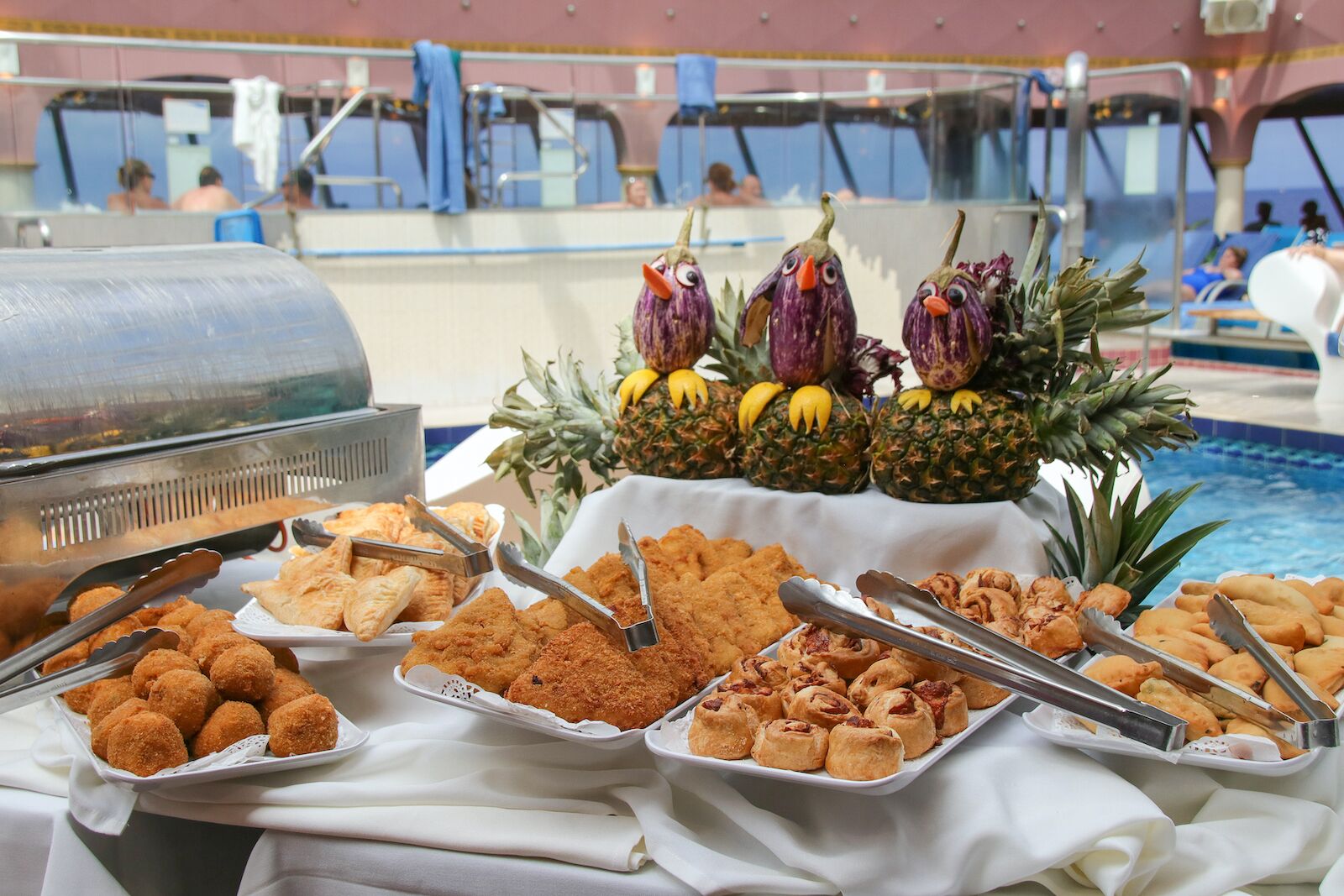 Buffet-goers expecting stale pizza with rubbery cheese and watery tomato sauce are sure to be disappointed on MSC Cruises. Buffet pizza is one of the ship’s most well-made items.

“We have very good well-trained pizza makers that hand toss the dough right in front of you,” Van Der Merwe says. “And we only use San Marzano tomatoes and fresh mozzarella cheese.”

He also emphasizes that his dishes are made to order whenever possible. For example, grilled items are freshly prepared and rotisseries are displayed front-of-house so passengers can watch their proteins be barbecued or roasted in real time.

Turnaround day (when current passengers disembark and new passengers board) is as busy as a post office at noon. Despite needing all hands on deck, Van Der Merwe always spares at least two chefs to go out on quality control patrol for new ingredients and supplies.

“They stand on the pier checking the quality of the products that come on board,” he explains. “If anything isn’t up to our standards we send it back to the supplier.”

10. Every dish on a cruise ship is taste tested before it’s served 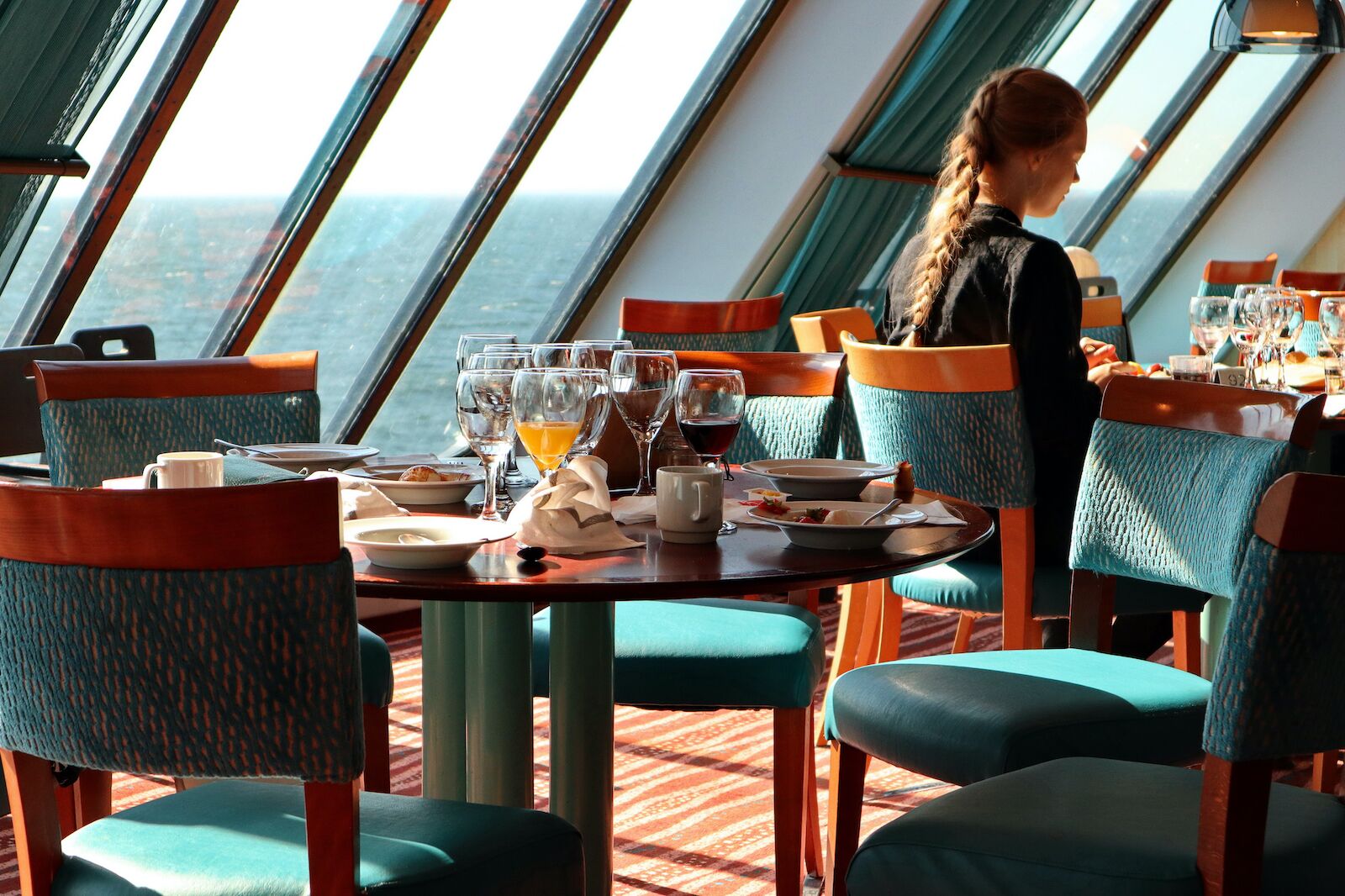 Similarly, everything is tasted by the chef and his team before it’s served to guests.

“We also do what we call a menu briefing and tasting where we pre-plate all the food for the night,” explains Van Der Merwe.

One person from each galley station – and there could be up to 18 stations – tastes each dish. The chefs explain the menu and the pastry chef presents his desserts. Of course, they do it early enough in the day that if adjustments need to be made they have time to make them.

CruisesEverything You Need To Know About Navigating COVID-19 on Cruise Ships
Tagged
Cruises Food + Drink Restaurants + Bars
What did you think of this story?
Meh
Good
Awesome