Sesame seeds are a staple ingredient in the diverse cuisine of China. The seeds are toasted and used as a topping for cakes and dim sum snacks. They’re also ground up into a paste and used as a dipping sauce, a sauce for noodles, or a filling for dumplings and mooncakes. High in fatty acids, minerals, and antioxidants, sesame seeds are also cherished for their nutritional properties.

In China, the nutty, earthy, slightly bitter flavor of sesame balances out the sweetness of desserts. Sweet sesame snacks pop up at breakfast, tea time, and, of course, as the perfect, slightly sweet after dinner bite. The place you’ll most encounter heaps of Chinese desserts dotted with sesame seeds is during festivals and celebrations, especially around Chinese New Year.

Here are seven Chinese desserts with sesame seeds to try. 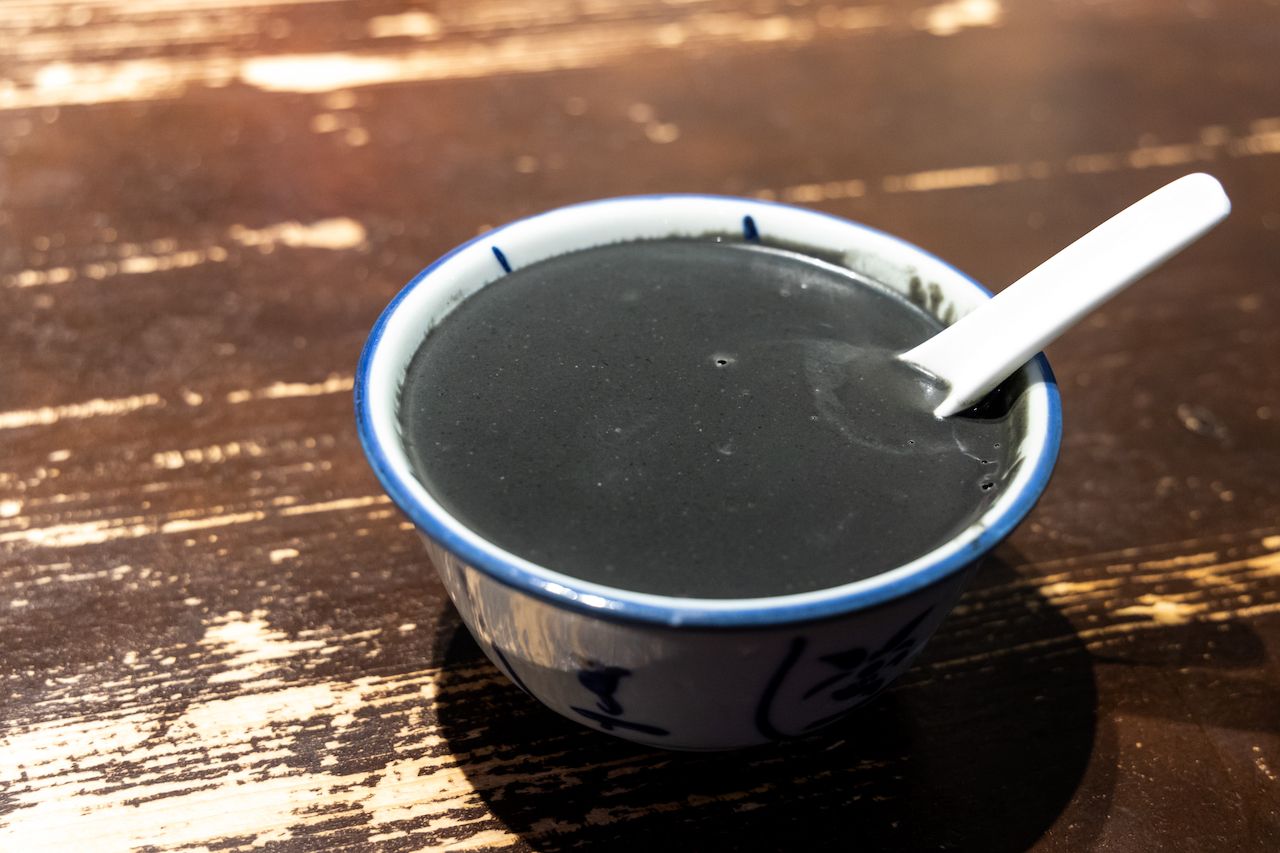 This Cantonese dessert soup, or tong sui, is also sometimes known as black sesame paste. Usually served warm, toasted black sesame seeds give this viscous soup a nutty, earthy flavor. It’s served as a cap to a meal, but it can also be served in a dim sum spread. The blogger behind Dim Sum Central says the aroma of black sesame soup reminds him of “winding back streets of Sheung Wan in Hong Kong, where you’ll still find small restaurants making these traditional desserts.” 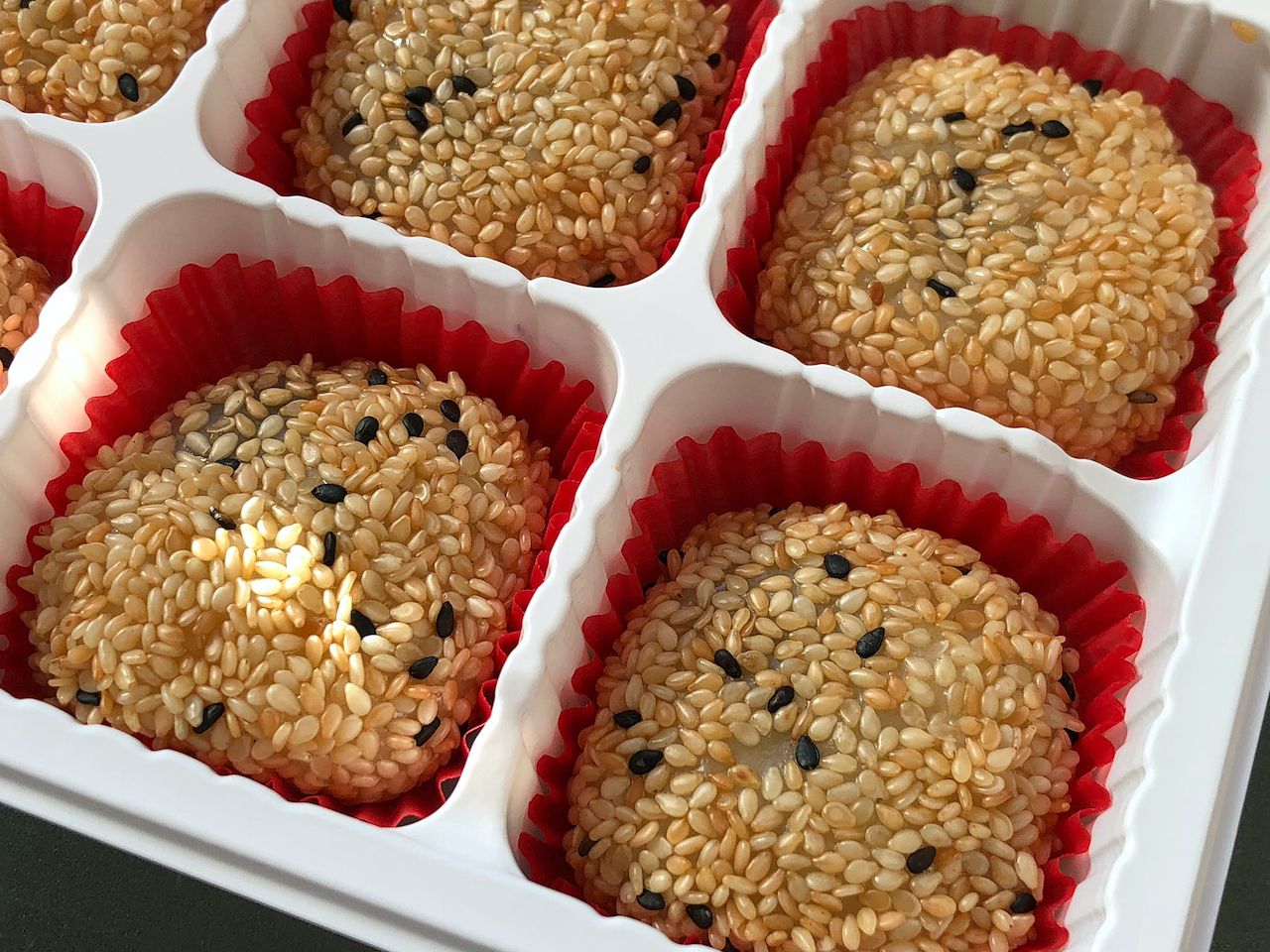 This sticky rice cake is typically enjoyed on Chinese New Year, when it’s considered good luck and prepared as an offering to the kitchen god Zao Jun. Folktales say that cake is offered to Zao Jun as a bribe to keep the god from speaking bad about a family in his report to heaven. It’s made with glutinous rice flour that’s sweetened with brown sugar. It’s either steamed or pan fried with egg. Nian gao is then commonly covered with sesame seeds or other toppings like dried dates. 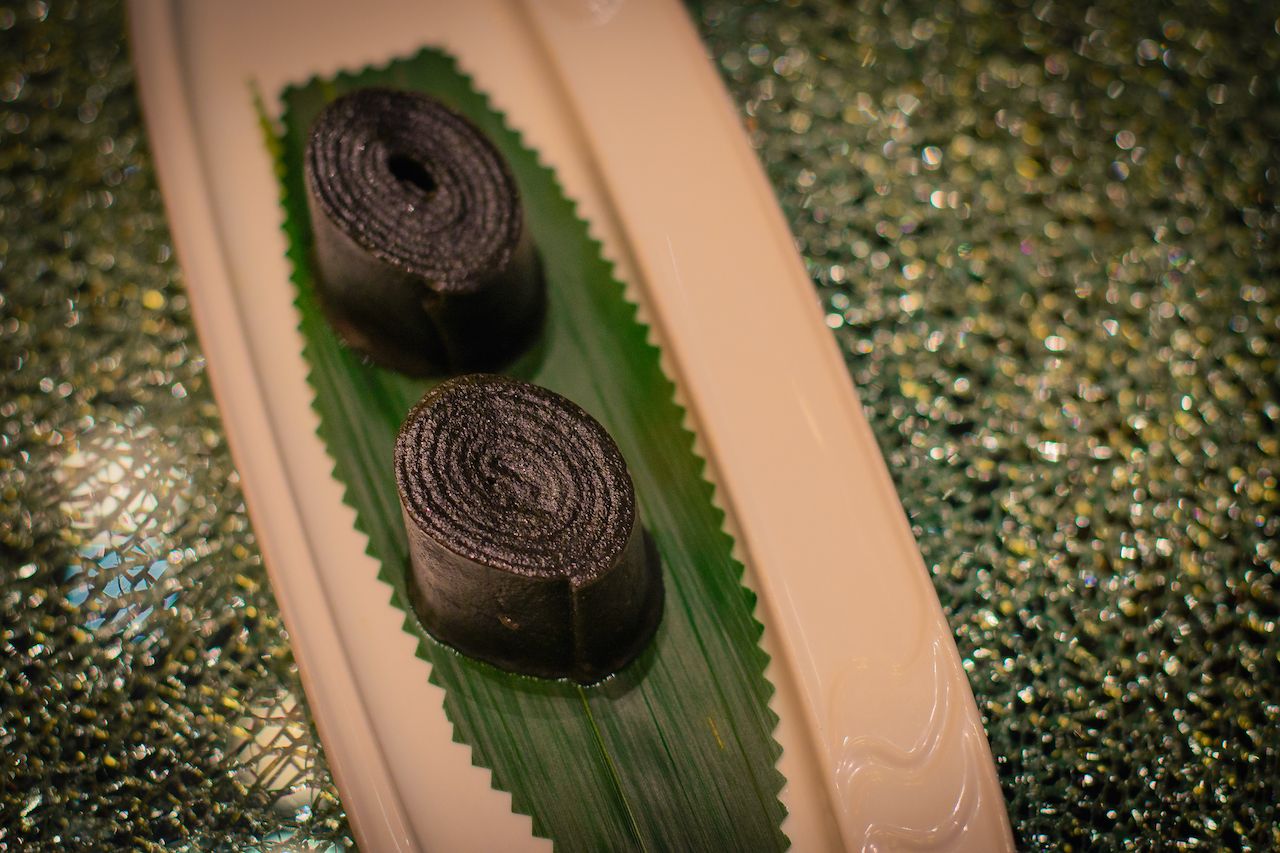 Popular in Hong Kong, black sesame rolls are a common dim sum dessert. This treat has a smooth, jelly-like texture, achieved by creating a thin paste from black sesame seeds. It’s shaped into a thin sheet that’s then refrigerated before being rolled into a cylindrical shape. It’s often also made at home. 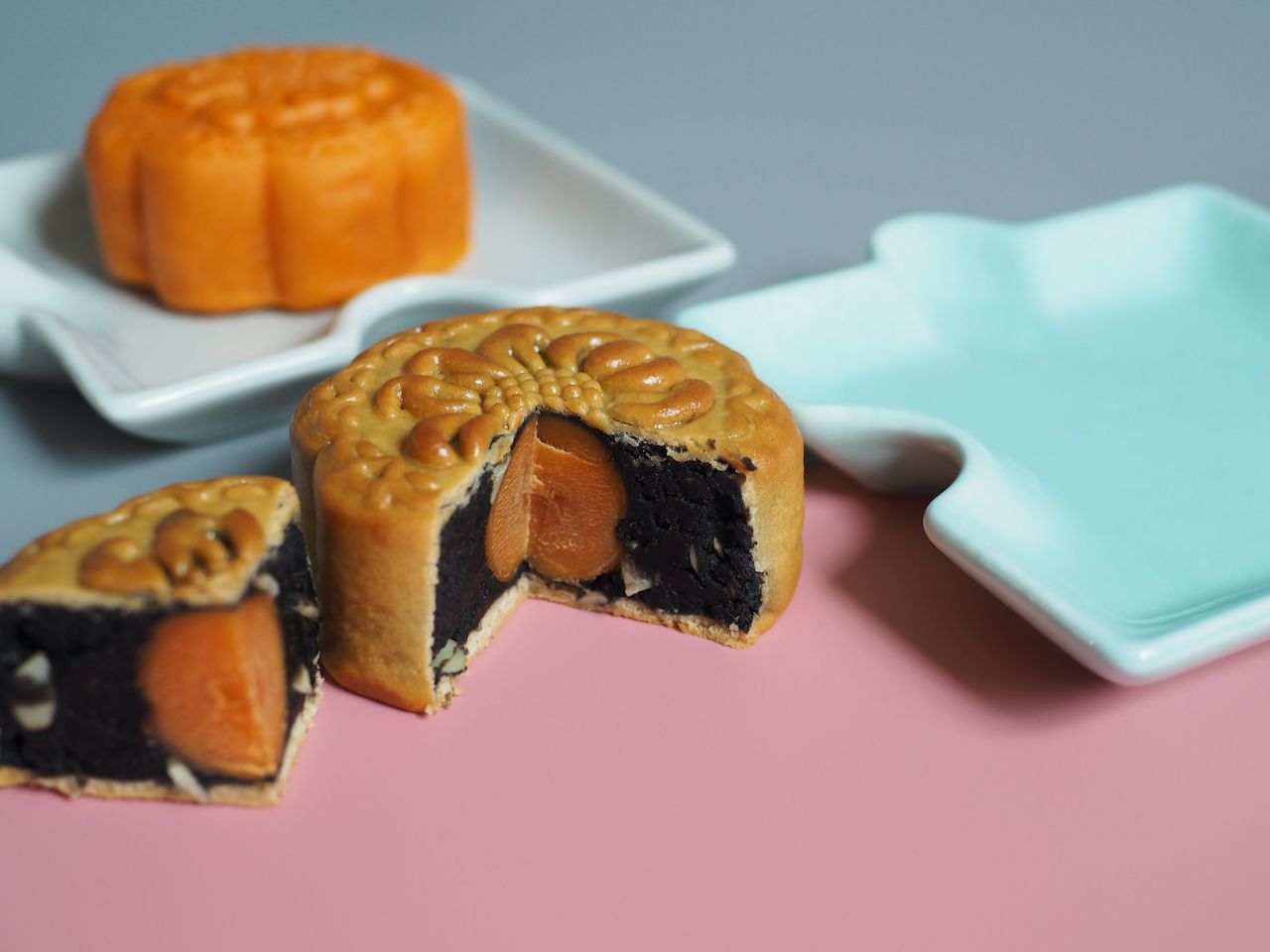 Mooncakes are a centerpiece of the Mid-Autumn Festival (also known as the Mooncake Festival), which is celebrated throughout China. It’s believed the festival started around 2,000 years ago to worship the moon and give thanks to the gods for the harvest. Though mooncake flavors can range from green tea to red bean paste, one popular filling is black sesame. Some people combine the slightly bitter sesame seeds with mung bean to create a smooth, fragrant paste. Others combine the black sesame seeds with nuts for a crunchy texture. There is also a version with a salted egg yolk filling surrounded by black sesame paste. 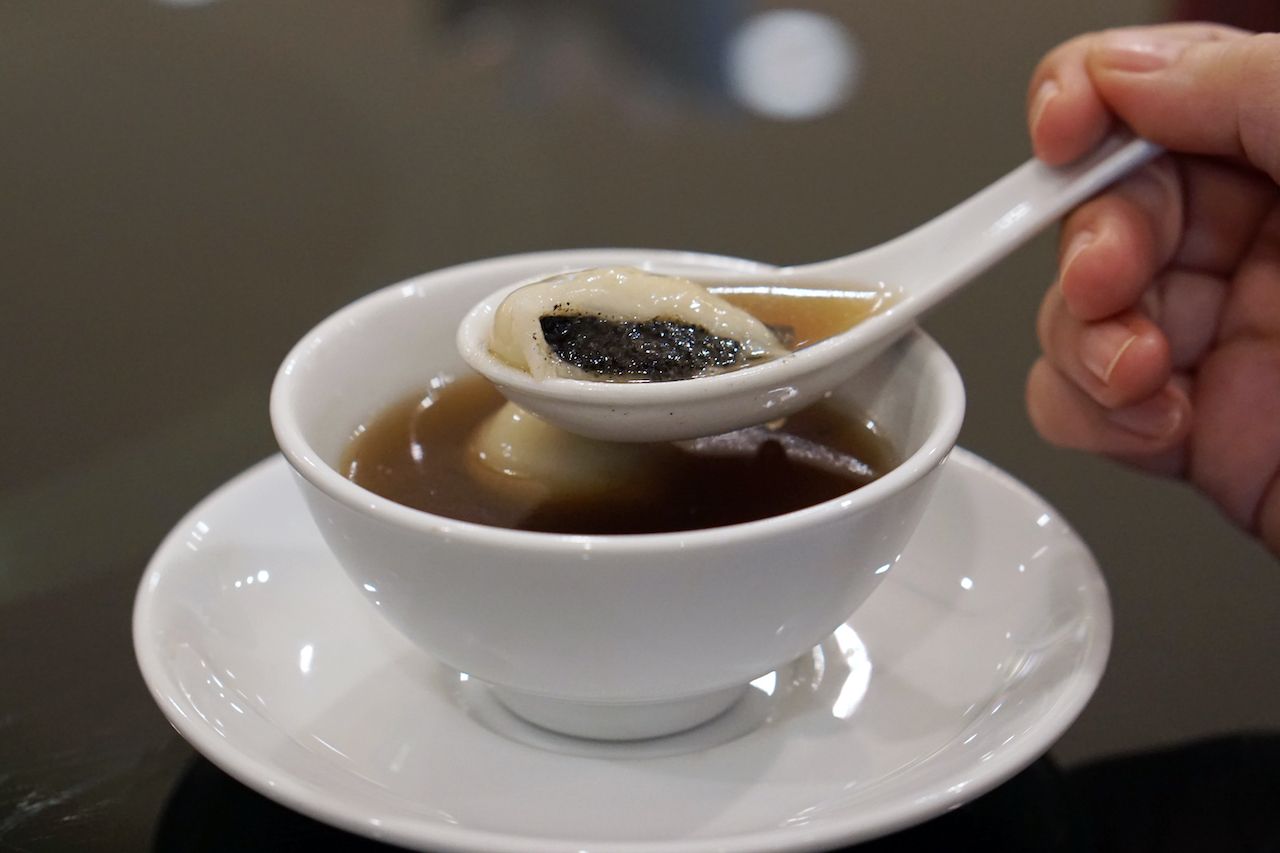 These sweet rice balls, called tang yuan, are made with a glutinous rice outside that’s filled with black sesame seed paste and submerged in liquid (often soup or rice wine). Though the outside looks similar to a dumpling, the texture is closer to mochi. It’s often prepared and eaten during the The Lantern Festival on the 15th day of Chinese New Year, which is usually a raucous celebration that symbolizes the revelers hopes for a prosperous new year. The dumplings have a symbolic meaning to some as well. In China, some people believe that round food symbolizes “completeness and family gatherings.” 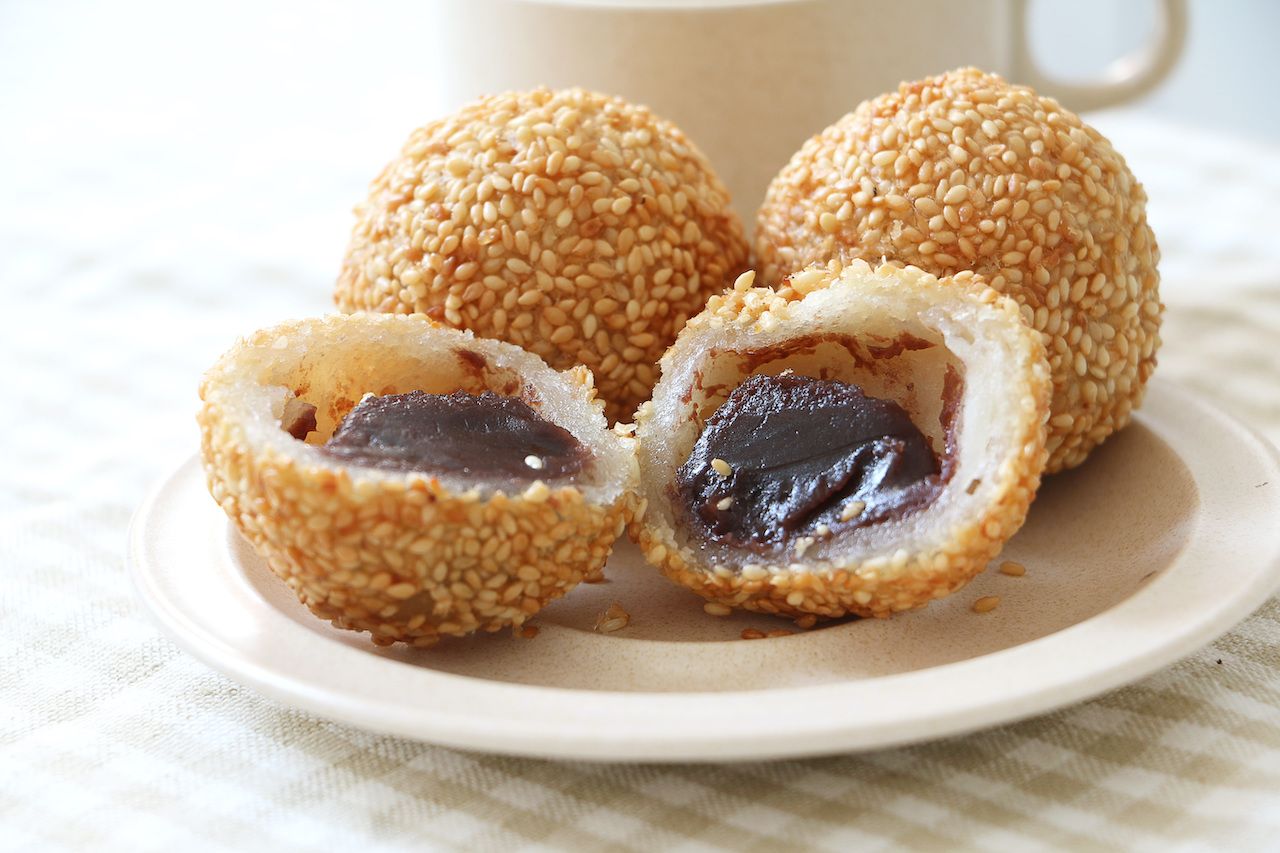 These fried sesame balls, sometimes also known as mu tuan, are a popular dim sum snack and are also enjoyed for breakfast in China’s Guangdong Province. The crispy outside is covered in sesame seeds and fried, while the chewy inside is often filled with red bean or lotus seed paste. Sesame seed balls are believed to have originated during the Tang Dynasty (from 618-907), when the snack was often enjoyed by members of the royal court in the imperial palace.

Though they are more popular in Southeast Asia, kuih also appear on dessert tables in China. The name kuih refers to an assortment of cakes, steamed buns, and other pastries — many of which incorporate sesame seeds. One version is a chewy, gelatinous cake that’s prepared by steaming layers of rice flour and black sesame paste. Another is called angku kuih, or red tortoise cake (also popular in Indonesia), which replaces the typical sweet potato used to color the outside layer with black sesame paste. You’ll find this type of kuih dessert in the cuisine of the Nyonya people — descendants of the Chinese migrants who settled in Indonesia and Singapore.

Dessert12 Sweet, Savory, and Delicious Chinese Desserts You Have To Try
Tagged
Dessert Food + Drink
What did you think of this story?
Meh
Good
Awesome